The Omega Aqua Terra might be considered the brand’s answer to the Rolex Datejust, due to its water resistance and handsome looks; however, this watch is a force all its own. First introduced in 2003, the Aqua Terra collection strikes the perfect balance between sophistication and ocean spirit. With both elegant and sporty features, this watch has seen major success over the years, even gaining feature-film chops in two of the James Bond movies thanks to its elegant feel and rugged durability.

While it may have a short history, there’s no doubt that the Omega Aqua Terra has made its mark on the minds of watch collectors and the industry alike. So if you’re in the market for this timeless everyday watch, here’s what you need to know about the Omega Aqua Terra collection and each of its different series before you make your purchase. 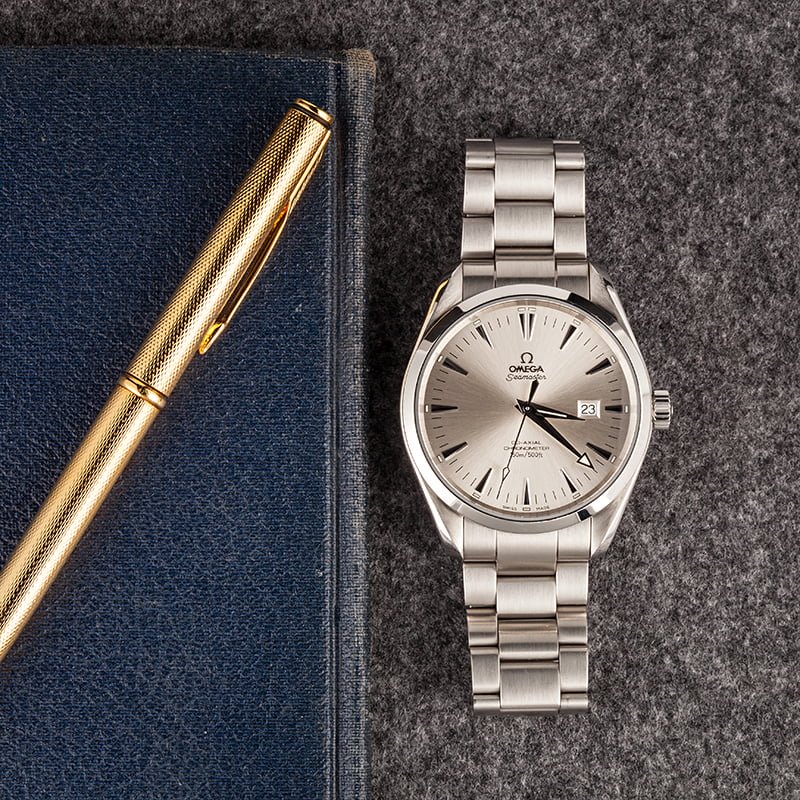 The Omega Aqua Terra is just as elegant in engineering as it is in design. With modern models featuring both water-resistance and antimagnetic qualities, this watch is surprisingly durable. Contemporary examples will withstand magnetic fields up to 15,000 gauss, making it one of the world’s best antimagnetic watches. Additionally, the screw-down winding crown and caseback allow the Aqua Terra collection to be water-resistant up to 150m (500 feet).

Unlike other watches in the Omega Seamaster collection, the Aqua Terra lacks a rotating bezel, making its case slick and sophisticated while still decidedly sporty. It is this handsome, refined aesthetic that makes the Aqua Terra a great ‘everyday’ watch, pairing well with both a suit and t-shirt and jeans. Another defining feature of the collection is its versatility. The Omega Aqua Terra comes in eighty or so different variations, giving collectors the choice between classic stainless steel models, their signature Sedna gold, dual-tone and even yellow gold and titanium in older collections. You can also choose between matching metal bands, polyamide, polyester, leather, and rubber straps, further allowing you to customize the entire look and feel of your adaptable Aqua Terra. 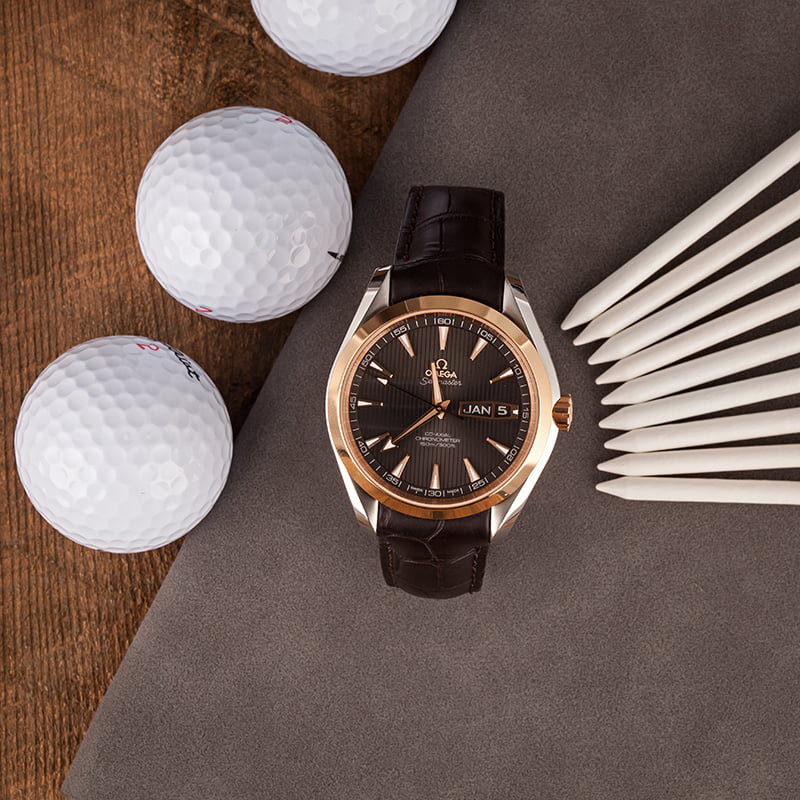 When the Aqua Terra was first released in 2003 it was accompanied by Omega’s first Co-Axial movement – the Omega Cal. 2500, which was developed in the 1990s. Based on an ETA movement, the Cal. 2500 was accurate and thin, allowing the first models of the Omega Aqua Terra to measure just 11mm thick.

The modern feel of this watch was accompanied by contemporary aesthetics, like a smooth polished bezel and an uncluttered dial that includes pointed hour markers and a date window at three o’clock. The first generation of the Omega Aqua Terra was available in 36mm, 39.5mm, and 42mm case sizes. 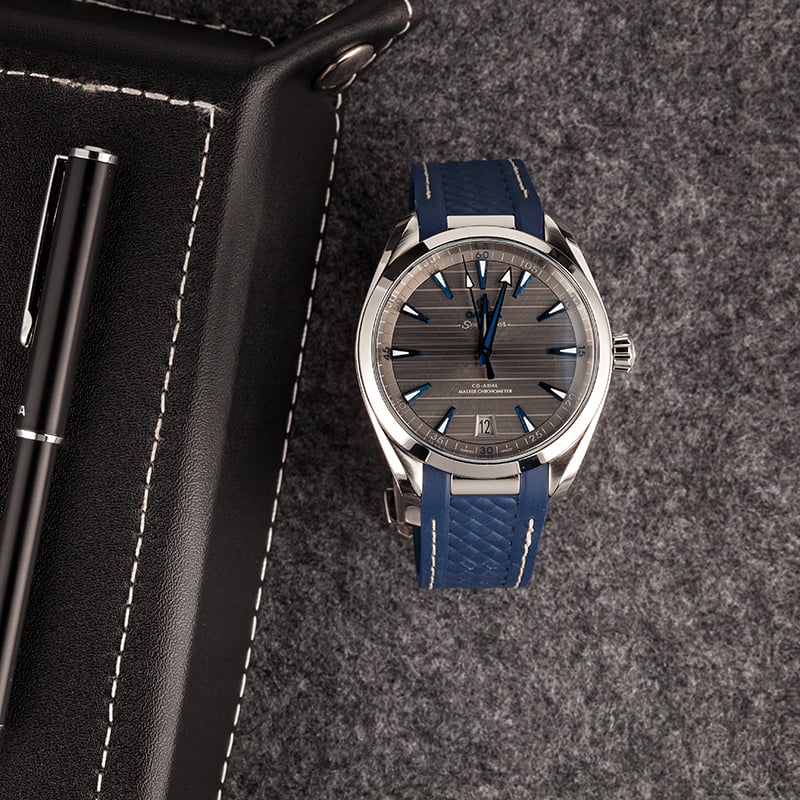 This second series is nicknamed the ‘Skyfall’ series because it was featured in the James Bond film of the same name in 2012. Yes, Daniel Craig wore this very watch. Best yet, it wasn’t any sort of special edition. Instead, the model worn in the film was an entirely new generation of the Aqua Terra that was ushered in with a slew of upgrades that ranged from the dial to the movement. Inside we saw the Aqua Terra upgrade to the COSC-certified Cal. 8500 movement which was designed in-house and featured twin mainspring barrels, a 60-hour power reserve, and a quick-adjust (jumping) hour hand. However, it also increased the overall size of the watch to 12.85mm thick, giving it a more sturdy and present feel on the wrist.

Along with an increase in thickness, we also saw major upgrades to the aesthetics of the watch, like vertical stripes (aka teak pattern) on the dial, as well as a 60-minute scale on the outside of the hour markers, which had been upgraded, too – given a more bold appearance and filled with easy-to-read lume. Additionally, there was a frame added to the date window and the hands were slightly reshaped to increase the sporty-feel of the watch. Lastly, the new Aqua Terra was paired with a redesigned, three-link stainless steel bracelet with a butterfly clasp for a more refined feel. 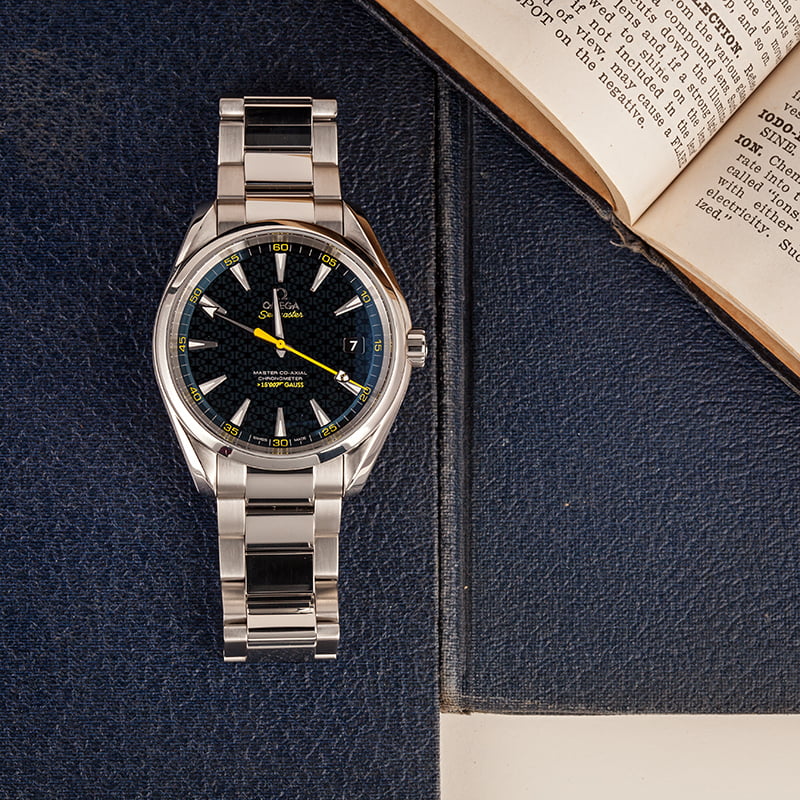 This short-lived series saw some really interesting changes. For example, we saw the upgrade of the movement to Master Co-Axial status for its antimagnetic properties (like using a silicon balance spring) which provide resistance up to 15000 gauss. The heavy presence of electronic devices in our daily lives means that we are surrounded by magnetic fields on a daily basis, making the antimagnetic capabilities of modern Omega Aqua Terra watches all the more useful. Omega’s modern in-house calibers are considered by many to be among the best antimagnetic movements ever made.

Around the same time, we saw the strange disappearance of the frame around the date window, and we got a mirror-polished center link bracelet rather than one with an all-brushed finish. Despite being worn by Daniel Craig as James Bond in the film Spectre, this version of the watch didn’t seem to have the same fanfare as the previous Skyfall series. 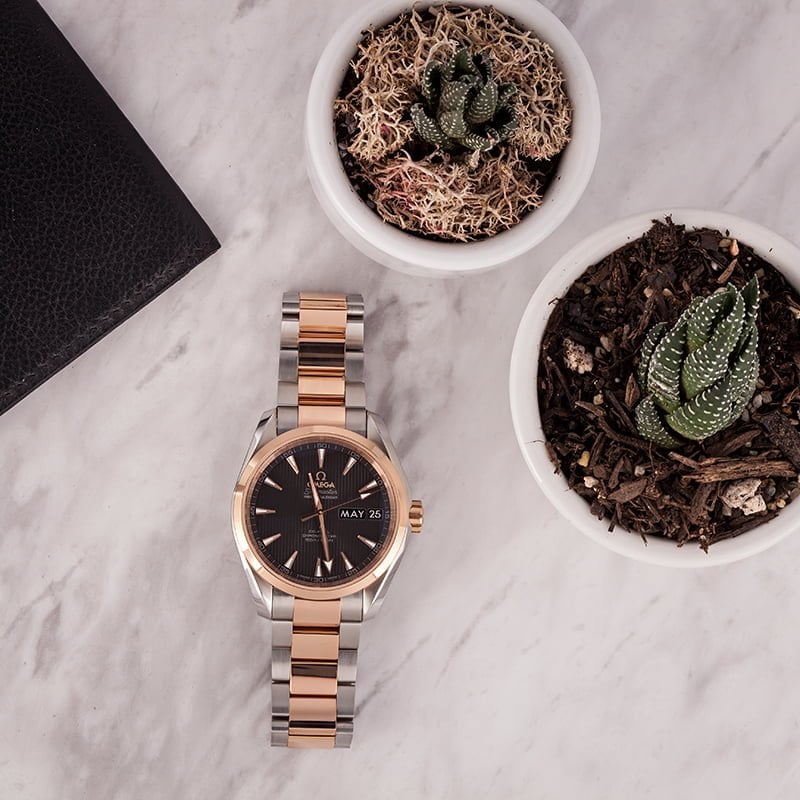 Current models of the Aqua Terra can actually be pretty easily defined due to their stark aesthetic upgrades. While Omega kept the ‘teak’ patterned dial they now have turned it horizontally. Omega also moved the date window down to six o’clock, which may seem abnormal for the industry, but is actually how the very first date-displaying Omega watches were styled. The move is a nice nod to the past while keeping the dial uncluttered and symmetrical.

Additionally, there are ample mechanical upgrades. Inside the modern Omega Aqua Terra models, you’ll find three different kinds of movements, all based on the Cal. 8500. There’s the 8900 and 8901 (which is the luxury-finished version) that you’ll find in the 41mm models, along with the slightly smaller 8800 that powers the 38mm versions. The 8900 and 8901 boast 60-hour power reserves, while the 8800 has a slightly shorter reserve at 55 hours. The 8900 and 8901 also feature a jumping hour hand, which allows frequent travelers to quickly adjust the hour without changing the minute or seconds hands.

Nonetheless, all three movements are certified by the Swiss Federal Institute of Metrology (METAS), which adheres to much more rigid standards than COSC chronometer-certification. All new movements also feature the latest antimagnetic technology (up to 15000 gauss), once again making the Omega Aqua Terra amongst the best antimagnetic watches in the industry. 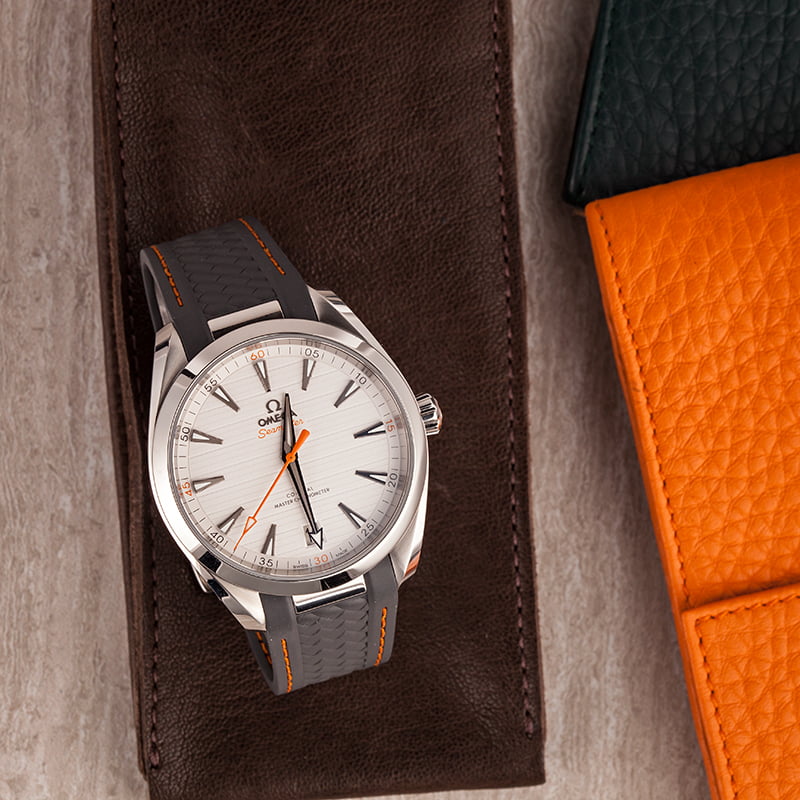