The 1990s were an interesting time for Rolex watches. The brand released one of its first entirely new models in decades and discontinued its original GMT-Master series. Rolex’s focus was shifting back towards perfecting its core models and away from the tumultuous Quartz era. This decade produced some of the brand’s more recognizable watches.

Join us as we take a closer look at popular 90s Rolex watches.

Notable Rolex Watches from the 1990s

Click here for our complete buying guide on Rolex Watches. 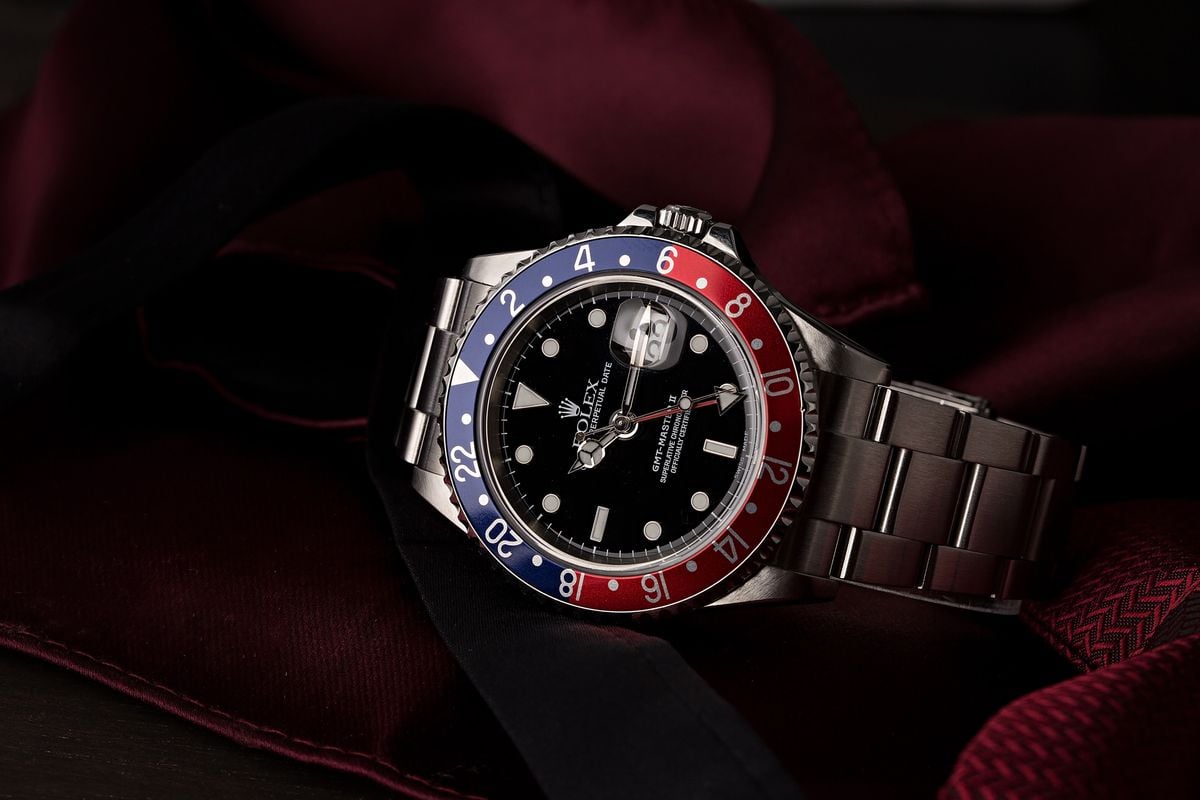 A Brief Rolex History: The Achievements that Shaped the 1990s

The Rolex catalog consists of several pillar models that have remained in production for decades. The brand’s dedication to perfecting its technologies contributes greatly to its success, as each watch produced is expected to last a lifetime. While expensive, Rolex watches are worth the investment as one can expect to wear the same watch for decades.

The brand was established in 1905 by Hans Wilsdorf. Rolex earned its reputation for highly precise timepieces early on, becoming the first wristwatch to acquire the Swiss Certificate of Chronometric Precision in 1910.

Numerous world-firsts and various other successes followed, ultimately shaping the Rolex brand as we know it today. In 1926, Rolex developed the Oyster case, creating the world’s first waterproof wristwatch. While it has since been tirelessly perfected over the past century, the Oyster case remains a fixture of the company’s catalog. A few years later, in 1931, the Perpetual movement was introduced, earning Rolex the title of the first-ever self-winding movement with a Perpetual rotor. This mechanism also remains a fixture of the Rolex portfolio, and together these two innovations serve as the backbone of the modern Rolex catalog. 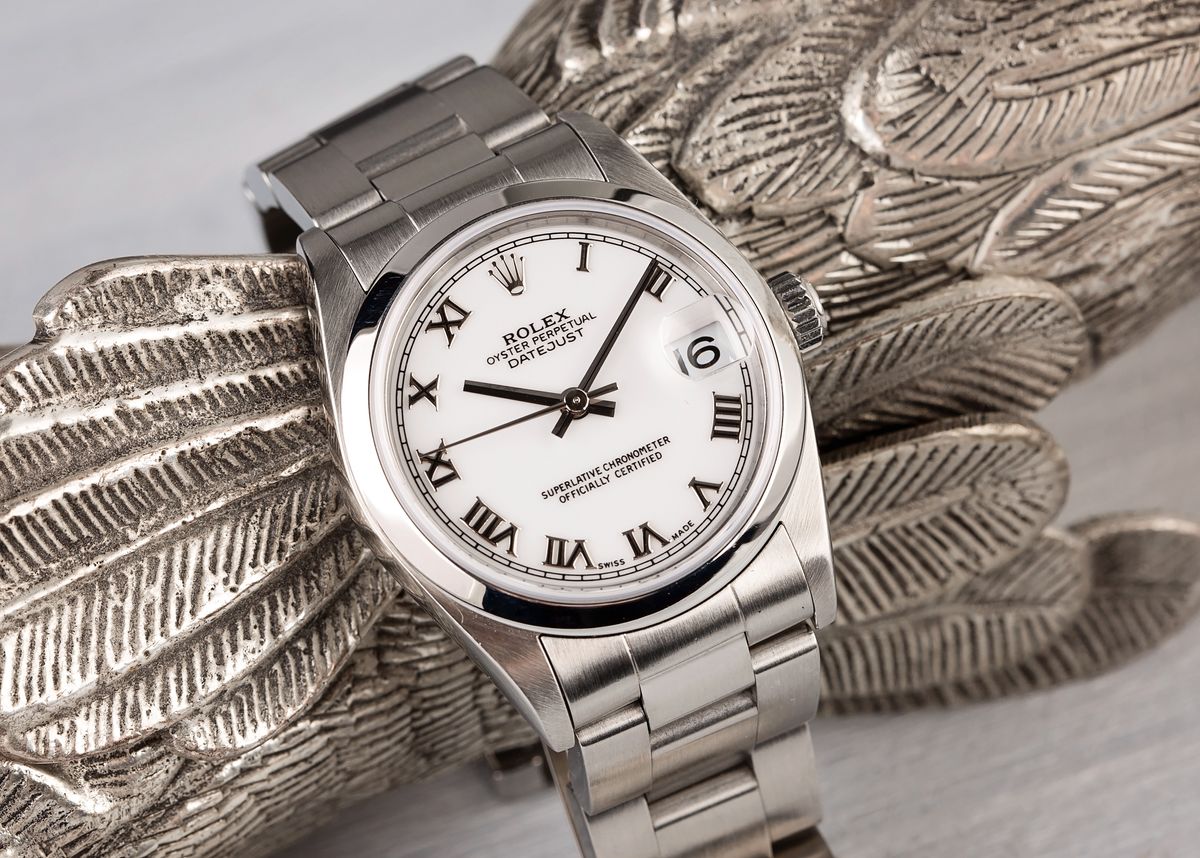 1945 marked the debut of the Datejust, which would go on to be one of the most popular watches in the 1990s. It was the first instance of an automatically changing date mechanism and utilized the Oyster case and Perpetual movement. The following decade saw the release of numerous core models, such as the Submariner, GMT-Master, Explorer, and Oyster Perpetual.

Skipping ahead to the 1970s and early 1980s, Rolex briefly shifted its focus to developing a Quartz movement worthy of the prestigious Rolex name. This era is often referred to as the Quartz Crisis as it saw a sharp decline in mechanical watch sales in favor of more accurate and affordable watches powered by Quartz movements.

While Rolex remained committed to further developing its technologies, the brand was not immune to the effects that the Quartz Crisis had on the Swiss watchmaking industry, and the Rolex Oysterquartz was created. A Quartz movement developed entirely by Rolex powered the watch, which also offered a modern and angular take on the immensely popular Datejust. That brings us to the 1990s and some of the most popular watches produced during that time. 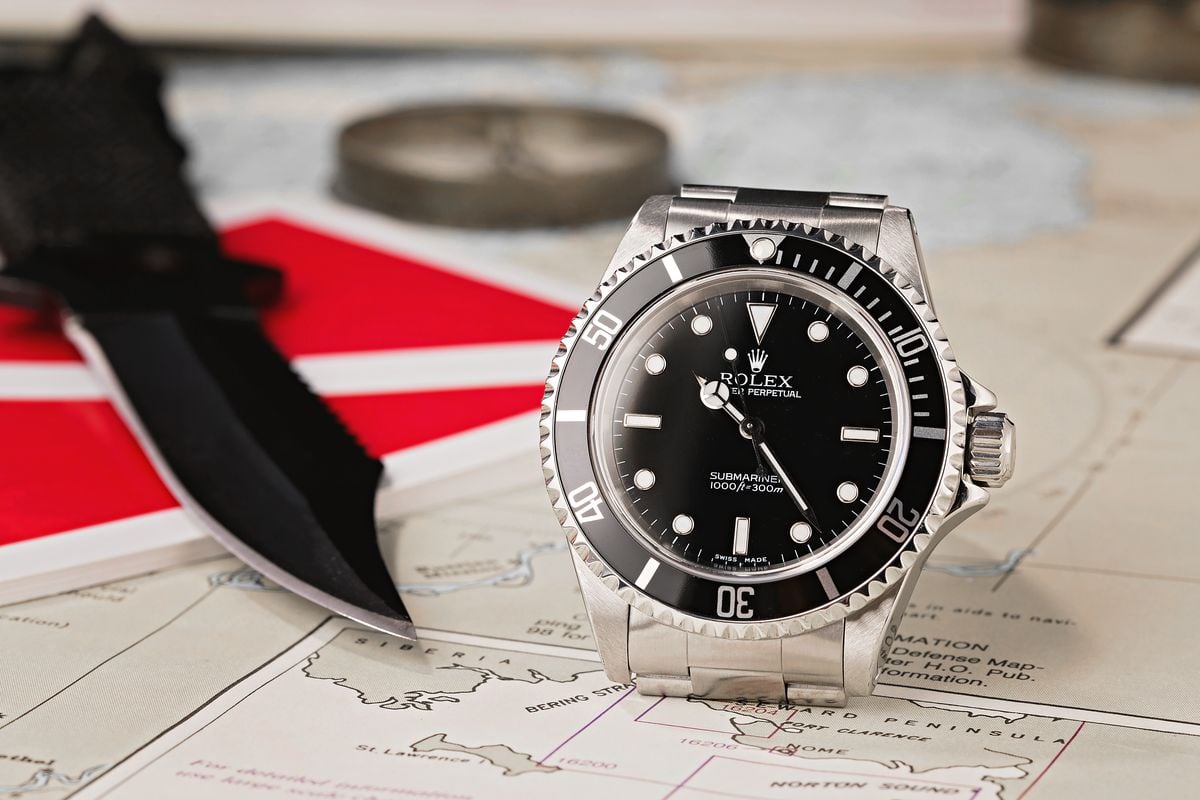 Popular Rolex Watches from the 1990s

By the 1990s, much of the dust from the Quartz Crisis had settled, and Rolex returned its primary focus back towards perfecting its core models and purpose built tool watches. Many of the models that first emerged at the end of the 1980s and early 1990s would go on to define much of the Rolex brand as we know it today. 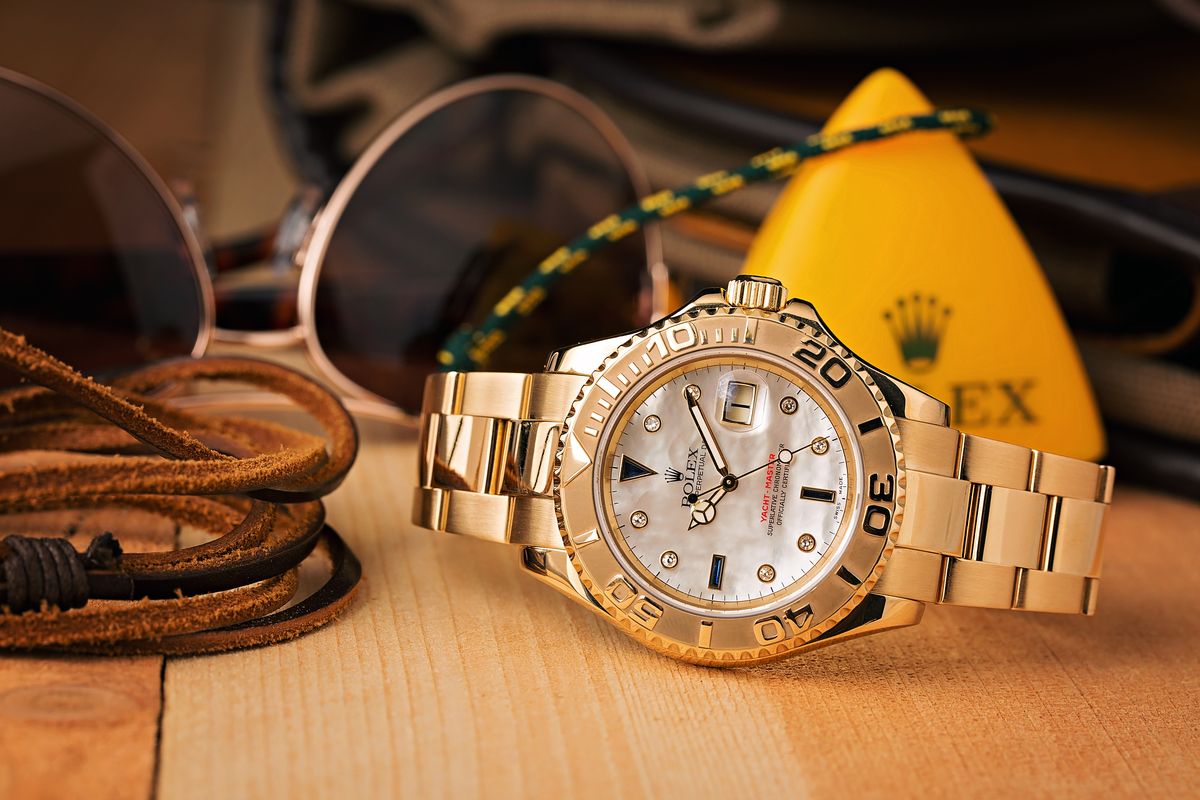 The release of the Rolex Yacht-Master in 1992 was significant as it was one of the first brand new models from the company in decades. If its design looks familiar, that’s because it’s heavily inspired by the Submariner diver’s watch with a 60-minute bezel, similar Mercedes hands, and the same case size. However, while the Submariner was developed for use below the sea, the Yacht-Master is much more suited for life on the decks of a yacht with a more opulent design and a lower depth rating – the Submariner is water-resistant up to 300 meters while the Yacht-Master is waterproof up to 100 meters.

Part of the Yacht-Master’s immense success during the 1990s lies in its exquisite styling. The lugs are slightly more rounded than the Submariner, and the bezel (often presented in precious metals) features  a sand-blasted finish with raised and polished graduations.

The model debuted in all-gold with the ref. 16628, followed shortly by the mid-size and ladies editions a few years later, and then the steel and platinum Rolesium ref. 16622 in 1999. Several other editions have also since been released, including those fitted with ceramic bezels. However, the all-gold and Rolesium editions remain the most representative of Rolex watches produced during the 1990s. 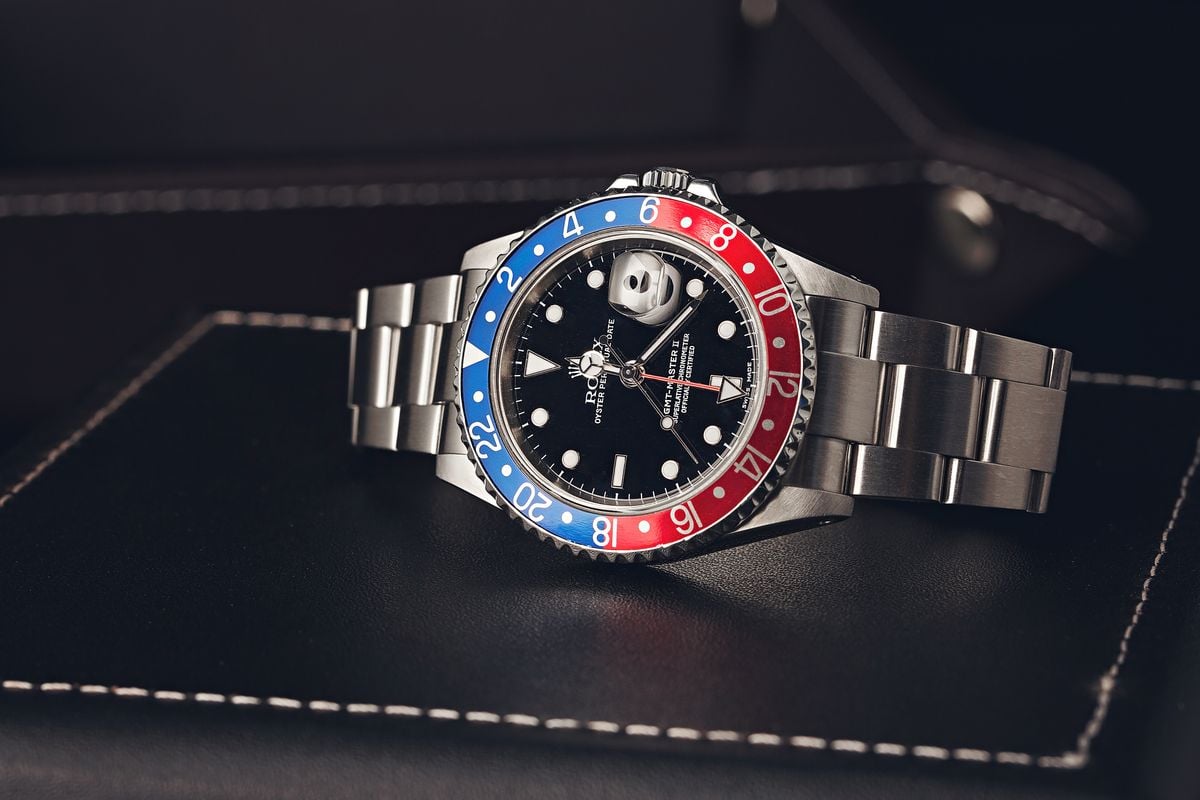 The reference 16710 was released in the late 1980s and remained one of the most sought-after editions of the coveted pilot’s watch throughout the 1990s and well into the mid-2000s before it was finally discontinued in favor of the 6-digit ref. 116710. While it wasn’t a completely new model as the standard GMT-Master had been in production since the mid 1950s, the GMT-Master II was still a very innovative addition to the Rolex catalog as it introduced an independent 24-hour hand. Now that the 24-hour hand is independent, the wearer can read two time zones on the dial and a third on the bezel.

The very first GMT-Master II ref. 16760 was released several years prior to the introduction of the ref. 16710 in 1983, and is often referred to by avid collectors as the “Fat Lady” after the case’s slightly thicker proportions. This was necessary to accommodate the new movement with its independent 24-hour hand. The ref. 16710 debuted a more refined and slimmed-down design, perfecting the first generation of the GMT-Master II.

During its nearly 20-year production run, the ref. 16710 featured either Tritium or LumiNova (and then later Super-LumiNova on its dial, holes or no holes on the case, three different bezel color options. Among the most iconic is the “Pepsi” bezel with a red and blue insert, although the series was also produced with a red and black “Coke” bezel and even an all-black option. 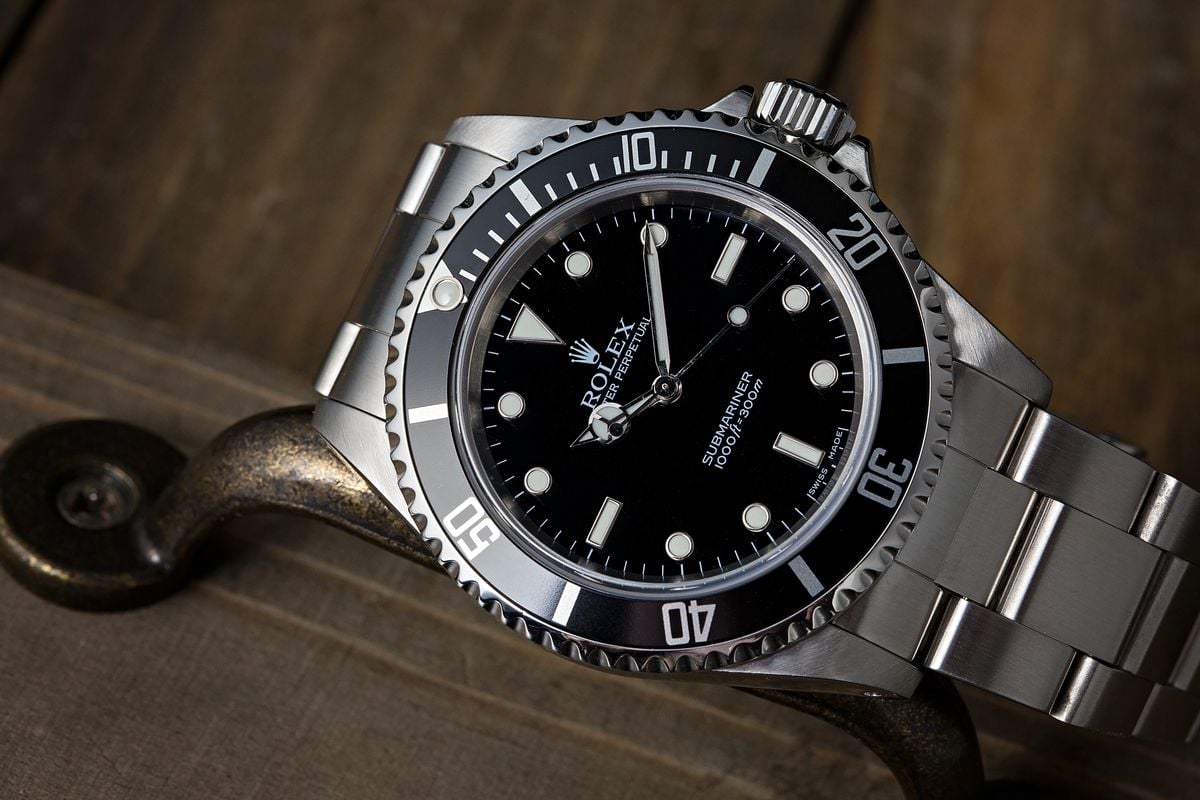 When the Submariner debuted in the 1950s, it did not have a date on the dial. As a professional diver’s tool watch, there wasn’t initially a need for a date mechanism. However, as popularity for the beloved James Bond Rolex soared, Rolex released an edition with the date prominently displayed at the 3-hour marker during the 1960s. Despite the popularity of the date-displaying model, Rolex always continued to make a no-date varant, with the ref. 14060 making an appearance in 1990.

The “No Date” Submariner, as many have come to know it, remained in production throughout the 1990s. It stays true to Rolex’s commitment to luxury with lumed plots in white gold surrounds while also offering substantial water-resistance up to 1,000 feet. As a modern Submariner, the ref. 14060 also received a unidirectional bezel for safer timing while underwater, a high-beat Perpetual movement, and a scratch-resistant sapphire crystal over the dial. At 40mm in diameter, it also keeps the standard size and weight that many collectors desire, and the ref. 14060 along with the date-displaying ref. 16610 became incredibly popular models for Rolex during the 1990s. 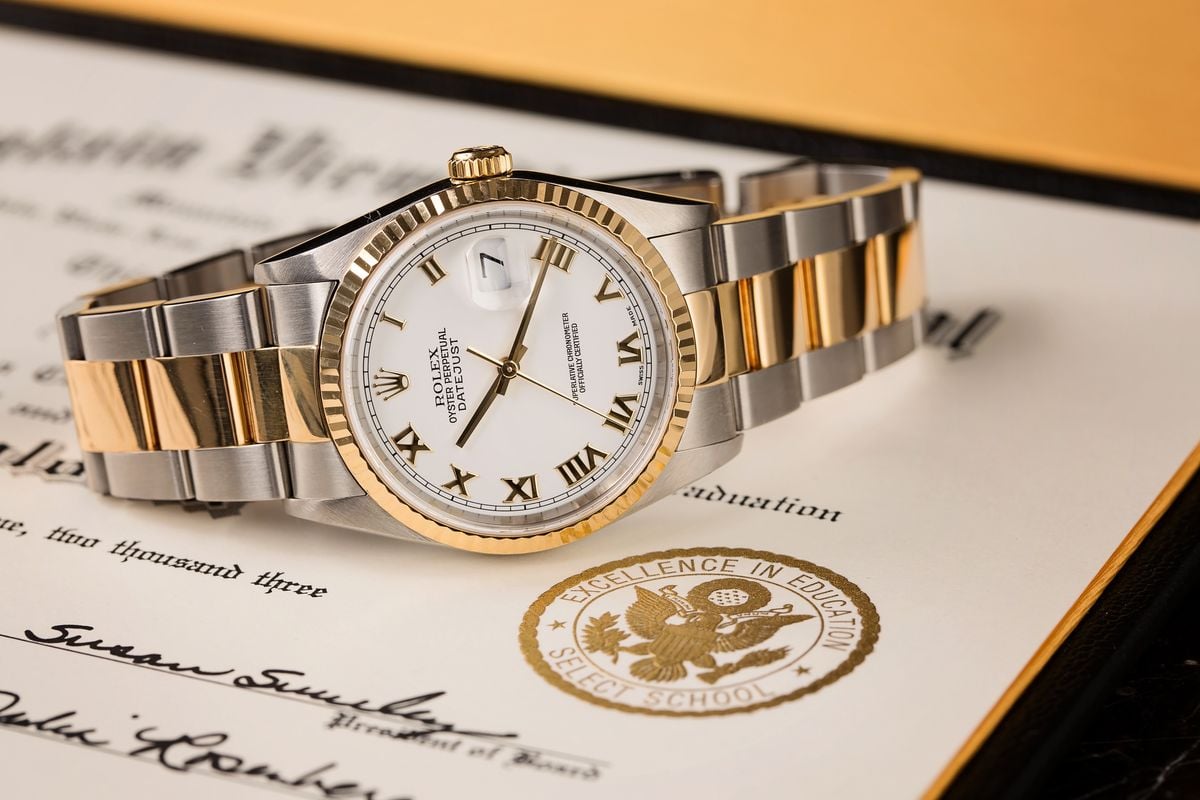 No list of popular 1990s Rolex watches would be complete without the Datejust 16233 in two-tone. Although it was released in the late 1980s, the reference 16233 remained in production throughout the entire next decade. It exudes 90s style with a flawless pairing of stainless steel and yellow gold with the brand’s iconic fluted bezel.

The ref. 16233 replaced the Datejust 16013, bringing with it numerous upgrades. The acrylic crystal was swapped out for sapphire, and the movement was upgraded from the Caliber 3035 to the Caliber 3135 with a 48-hour power reserve and a transverse balance bridge. However, the case size and bracelet options remain the same, with the case measuring 36mm in diameter and paired with either the 5-link Jubilee bracelet or 3-link Oyster. While there are numerous dial options available, champagne remains the most iconic and prevalent.

On the wrist, the ref. 16233 is undeniably a 90s Rolex. Whereas the modern Datejust feels heftier with completely solid bracelet links, the ref. 16233 features hollow end-links and center links. This design element allows the Datejust to maintain a slightly more affordable price point and gives it the classic feel of the watches from the 1980s and 1990s. 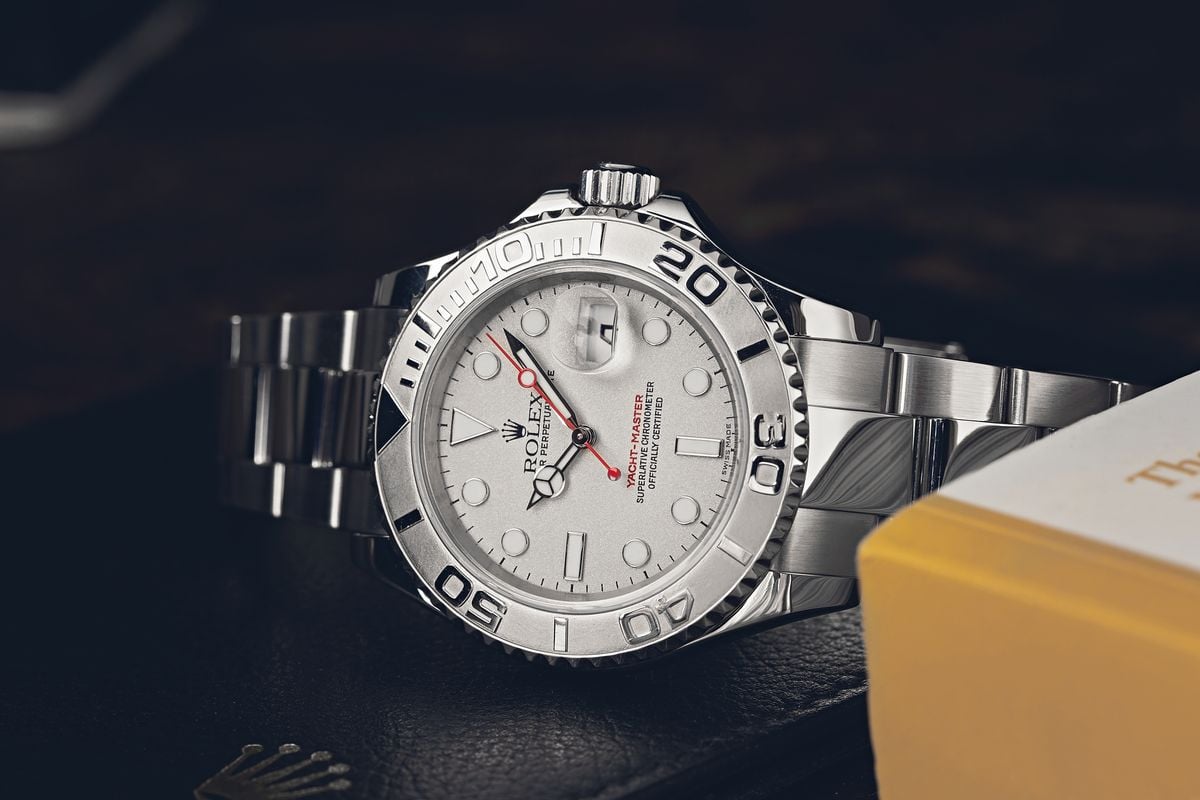 The Value of 1990s Rolex Watches

Among all Rolex watches both vintage and modern, it is often those from the 1990s that are the most affordable. Old enough to offer a savings compared to the current-production models, but not old enough yet to be accompanied by the steep price premiums that often accompany Rolex models from the 1960s or 1970s, the various models from the 1990s offer tremendous value for the money.

Offering a refined aesthetic that is the definition of “classic Rolex” – long before the arrival of Super Cases and ceramic bezels – the Rolex watches from the 1990s represent a defining time in the brands history. Many of the Rolex models from the 1990s hold their value incredibly well simply because they boast the 5-point coronet on their dial. Additionally, just like all Rolex watches, if properly maintained, they can outlive their owners and become cherished heirlooms for further generations to enjoy. 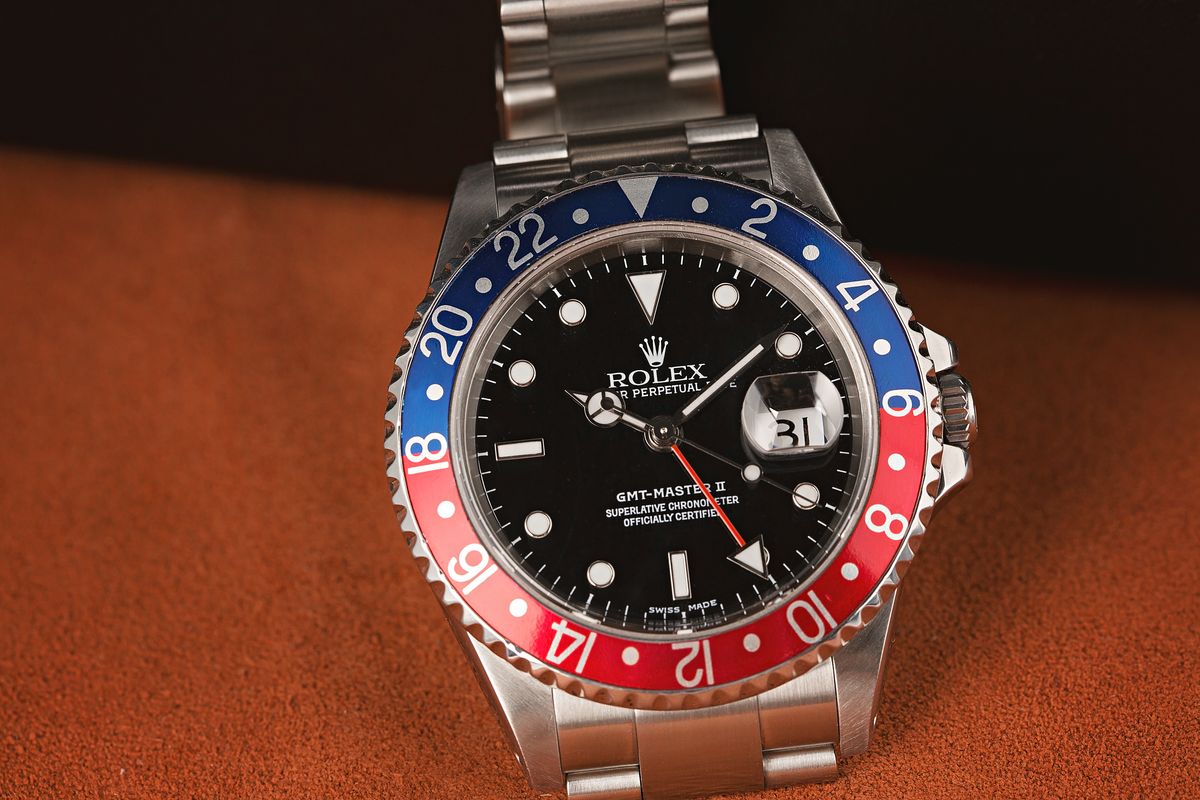