Rolex began its GMT-Master story in 1955 with its very first pilot watch made for Pan Am Airlines, the reference 6542. More than four decades later, the Swiss watchmaker concluded that chapter with its last GMT-Master watch – the ref. 16700. Of course, the Rolex pilot watch saga continues today with the GMT-Master II collection, but the original Rolex GMT-Master is no more.

Let’s delve into that very last reference with the ultimate guide to the Rolex GMT-Master 16700. 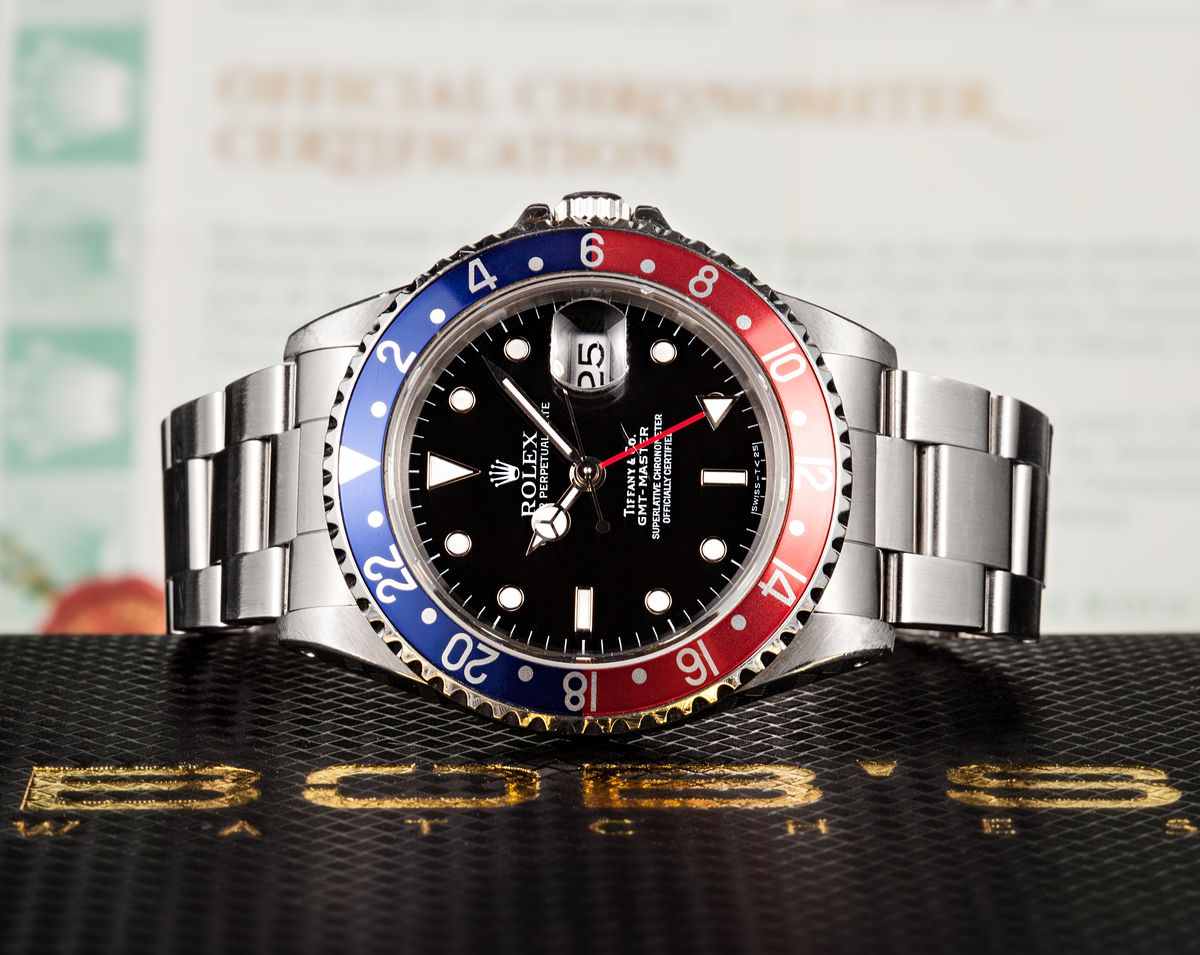 Click here for our Ultimate Buying guide on the Rolex GMT-Master. 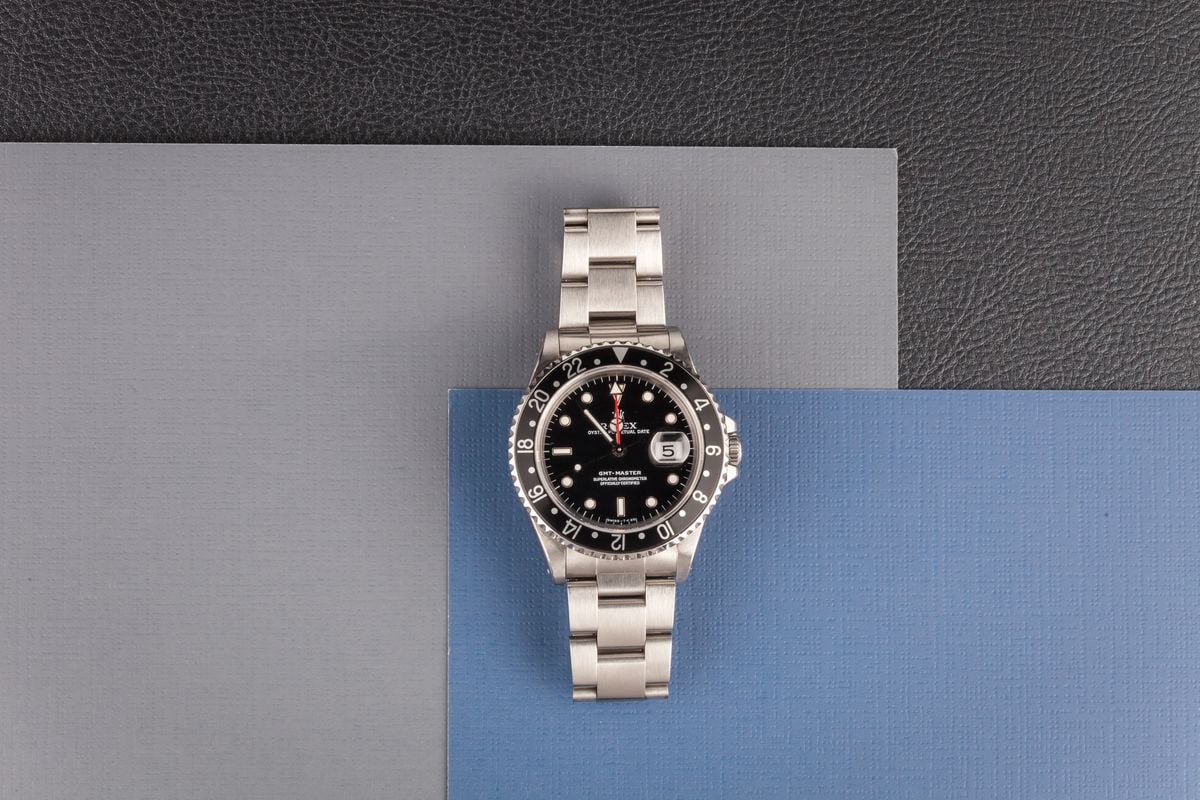 The Rolex GMT-Master made its debut in 1955, developed specifically for Pan Am pilots to keep track of two time zones. The cleverly designed Rolex watch included an extra hour hand (which would make one full rotation every 24 hours) on the dial and a rotating 24-hour bezel. Therefore, to display a second time zone, the pilot simply had to rotate the bezel to align the appropriate numeral with the 24-hour hand.

The first reference to launch the collection was the GMT-Master ref. 6542, which featured a 38mm stainless steel case, stainless steel bracelet, and a blue and red rotating Bakelite bezel marked with a 24-hour scale. Not only did the two-tone bezel help to differentiate between night and day hours in the second time zone, but the blue and red colorway also became a signature design trait of the GMT-Master watch. Although the blue and red bezel is officially known as the BLRO (bleu/rouge, which is French for blue/red) it is more commonly referred to by its “Pepsi” nickname.

Next in line was the GMT-Master 16750, which was launched in 1981 and produced until 1988. While the GMT-Master 16750 was stylistically similar to later versions of the ref. 1675 it replaced, Rolex did equip the newer model with enhancements such as double the water-resistance and an improved movement with a quickset date (where the date can be set independently of the time) and hacking (where the seconds hand comes to a complete stop when the winding crown is pulled out).

The Rolex GMT-Master ref. 16700 was in production for a decade until it was discontinued in 1999. And its discontinuation marked the end of the GMT-Master era and paved the way for the GMT-Master II to become Rolex’s flagship pilot’s watch. 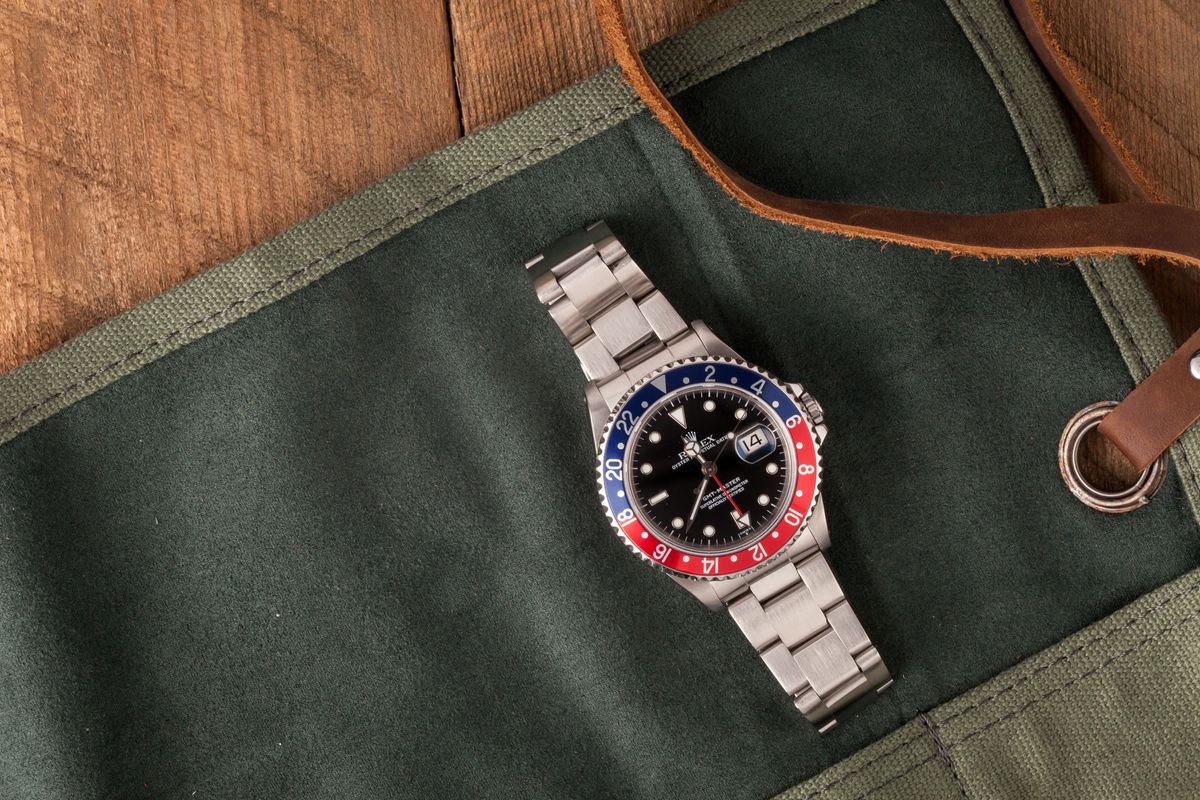 Unlike the three previous references of the GMT-Master, the Rolex GMT-Master 16700 was only available in one metal variant and bezel color options were limited to just two.

Since the GMT-Master 16700 was positioned as the more affordable alternative to the then-new GMT-Master II, Rolex opted to only offer it in stainless steel. The steel case measures 40mm in diameter and it was rated to be water-resistant to 100 meters – the same as the previous GMT-Master ref. 16750. However, the ref. 16700 was the first GMT-Master with a case furnished with a scratch-resistant sapphire crystal instead of acrylic.

With the GMT-Master 16700, Rolex offered the choice between a sporty three-link Oyster bracelet and a dressier five-link Jubilee bracelet – both in full stainless steel. In 1989, Rolex upgraded the Oyster bracelet to include the more secure Oysterlock clasp, which has an added cover lock mechanism that prevents the bracelet from accidentally opening. Interestingly, customers could also pay a little more to have the Rolex GMT-Master 16700 fitted with the Oyster bracelet ref. 93150 with the diver’s extension clasp normally destined for the Submariner watches of the era.

– Oyster bracelet ref. 93150 with diver’s extension as a premium option

Another great feature of the GMT-Master 16700 that some vintage Rolex collectors will appreciate is the presence of lug holes, which offer a vintage tool watch aesthetic and make swapping out the bracelets for different straps much easier. 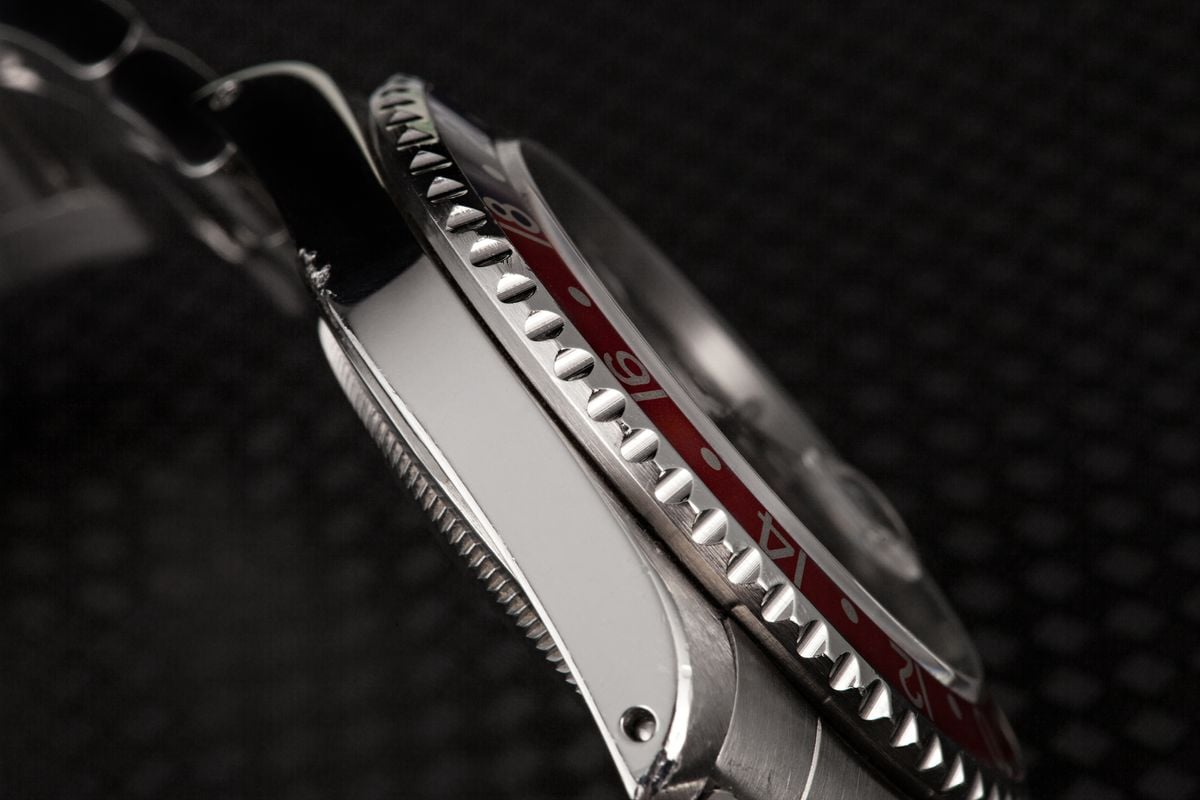 As with most Rolex Professional watches, the GMT-Master ref. 16700 features the familiar dial layout comprised of luminous Mercedes-style hands and a mix of rectangular, circular, and triangular luminous indexes. However, unlike other Rolex sports watches, the GMT-Master’s signature design detail is the existence of a red arrow-tipped 24-hour hand.

GMT-Master watches also have date windows, sitting as always at the 3 o’clock position and magnified by a Cyclops lens. The GMT-Master ref. 16700 date wheel has vintage-style “open 6” numerals up until 1992 when Rolex switched it out for closed ones.

While some later versions of the preceding ref. 16750 already had glossy black dials and hour markers with white gold surrounds, the GMT-Master ref. 16700 made that standard across all examples. Since the GMT-Master 16700 was in production from 1988 until 1999, the luminous material used on the dials changed over the years.

Originally, the dials used tritium for their lume, but around 1998, Rolex switched to modern LumiNova. Generally speaking, tritium Rolex dials have “SWISS T<25” under the 6 o’clock marker while LumiNova dials simply have “SWISS” printed there. Yet, it has been reported that there are some examples of LumiNova lume on “T<25” marked dials. The theory goes that Rolex had leftover “T<25” marked dials and just went ahead and used the then-new LumiNova anyways. 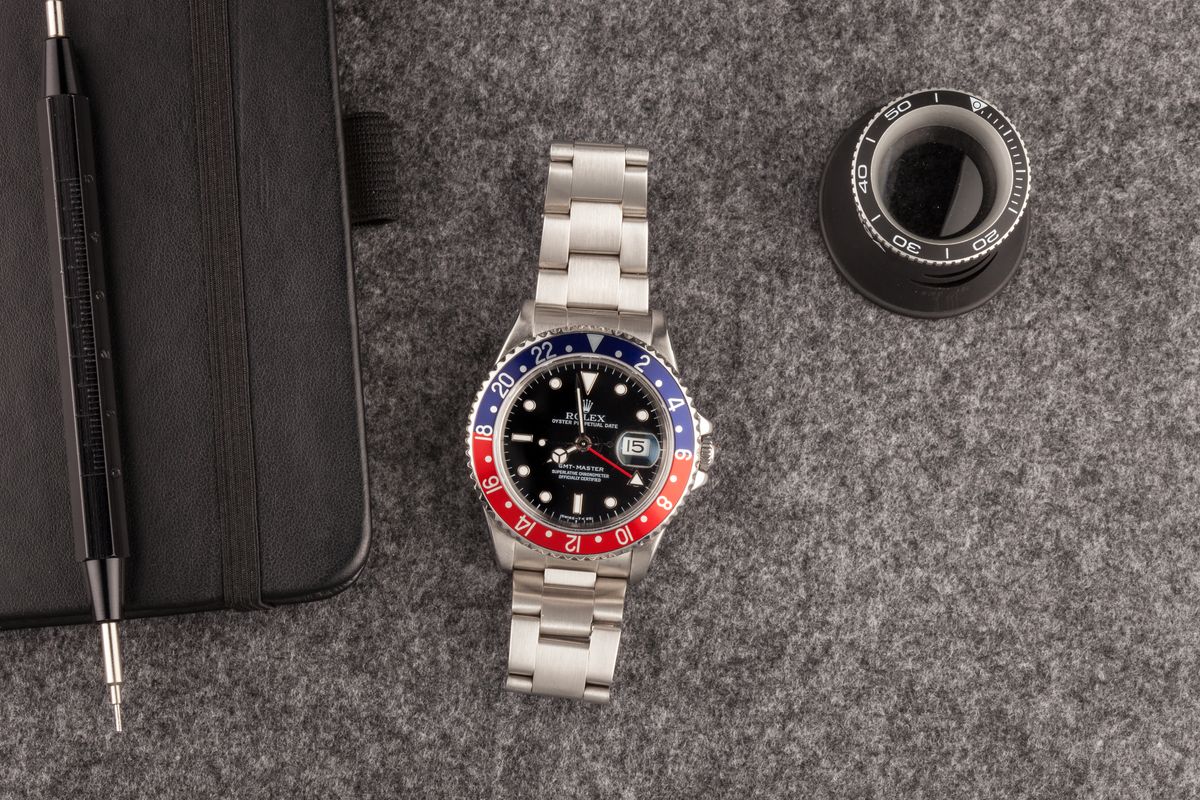 The 24-hour marked bezel of any GMT-Master watch plays a significant role in both the appearance and functionality of the watch. If the bezel is in the “zero” position, which is when the upside-down triangle of the bezel is aligned with the upside-down triangle at the 12 o’clock marker on the dial, then the arrow-tipped 24-hour hand will indicate the same time as the traditional 12-hour hand – just in a 24-hour format (for example, 15 hours for 3 pm). However, rotating the bezel is when the magic happens – turning the bezel until the time in another location is indicated by the 24-hour hand is how the GMT-Master transforms into a dual time watch.

As was the norm for the era, the GMT-Master 16700 is fitted with an aluminum bezel insert. While the majority of the ref. 16700 came with the famed blue and red “Pepsi” bezel, Rolex also offered the choice of a monochromatic black bezel. Additionally, you will also find examples of the ref. 16700 that are now fitted with red and black “Coke” bezels, although it was not a standard option for the model while the reference 16700 was in production. 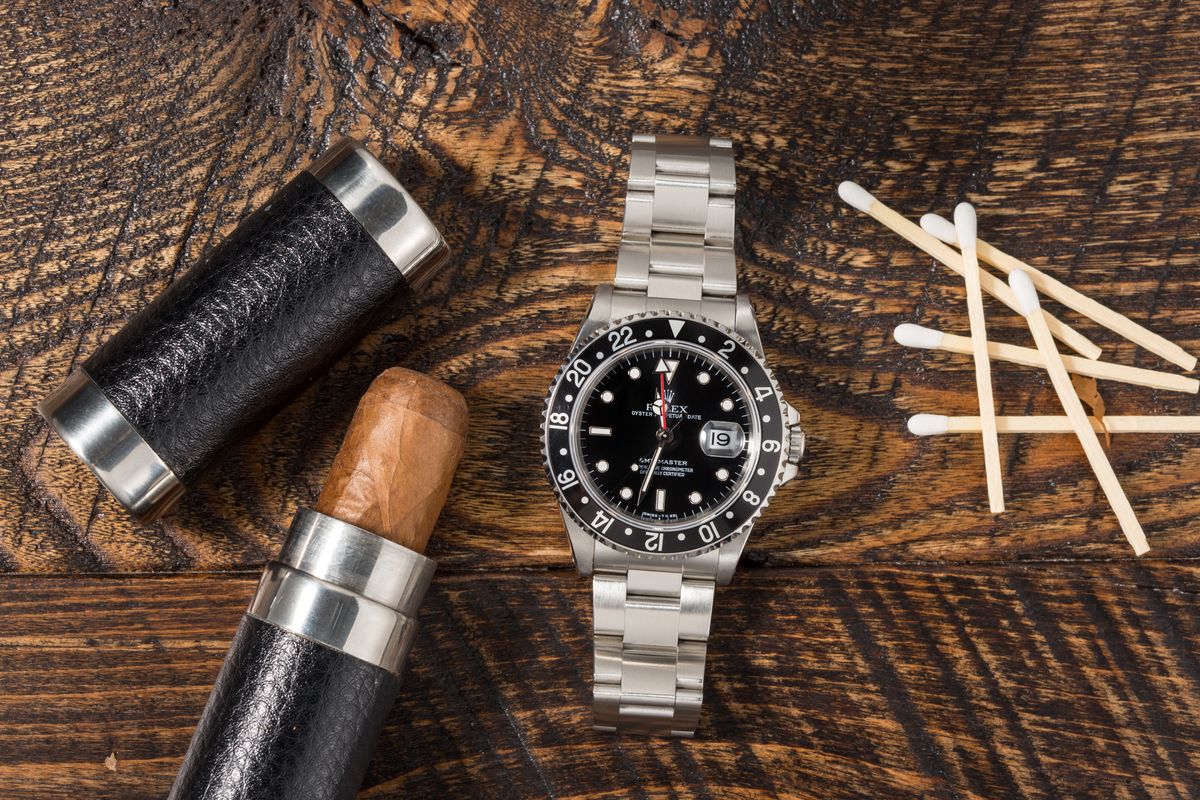 The quickset date function allows the user to change the date instantly and independently from the time-telling hands, rather than having to turn the center hands repeatedly until they pass midnight. The hacking seconds feature means that the seconds hand halts when the wearer pulls out the winding crown, thus permitting more precise time setting. 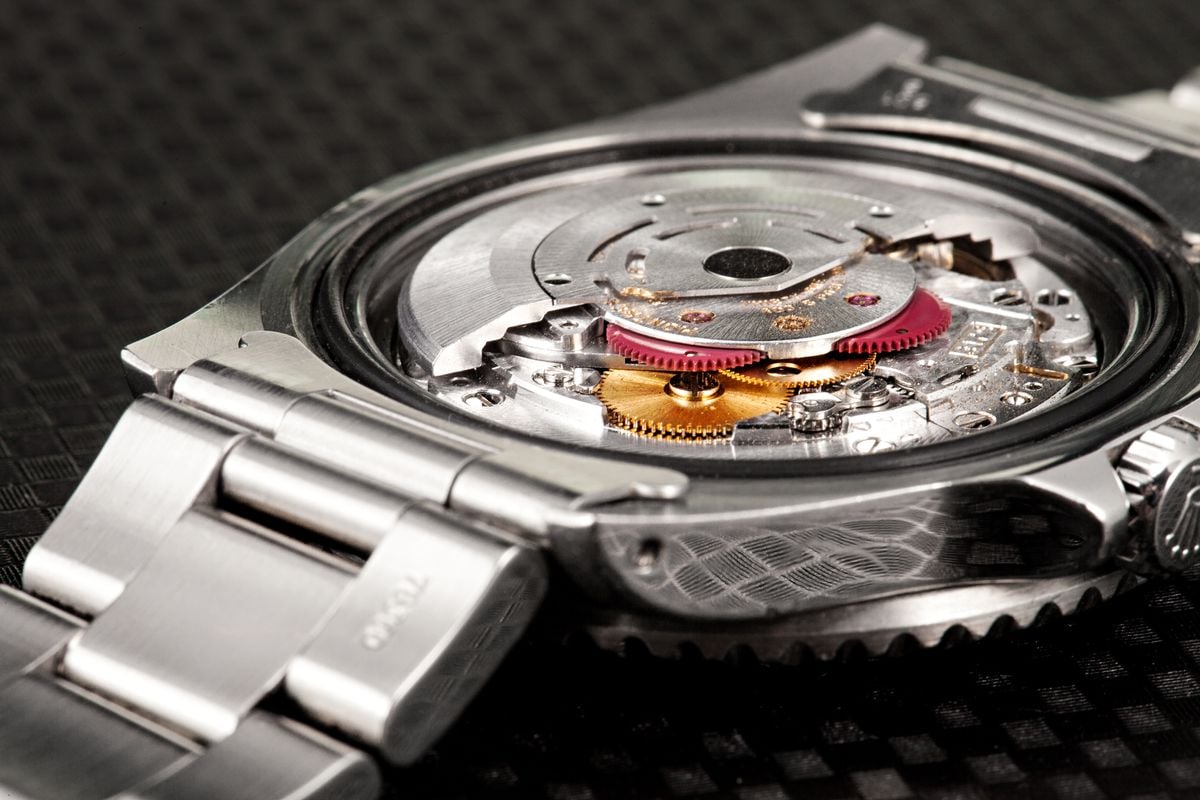 As previously mentioned, the GMT-Master ref. 16700 was positioned as a more affordable alternative to the then-new GMT-Master II. Plus, even in the secondary market, the GMT-Master 16700 was often overshadowed by other GMT-Master references. One of the reasons for this is that the 6542, 1675, and 16750 are considered vintage watches while the 16700 is still too a bit too young to fall into that coveted vintage category.

The best deals in the current pre-owned Rolex market are often those models made in the 1990s since they reside in between the sought-after vintage era and the highly popular current production lineup. For instance, unlike other older GMT-Master references, it is still possible to buy a GMT-Master 16700 at around the $9,000 price point. However, with more buyers becoming interested in discontinued Rolex watches, particularly classic sports models with aluminum bezels and lug holes, the price of the GMT-Master 16700 has risen steadily over the last several years. 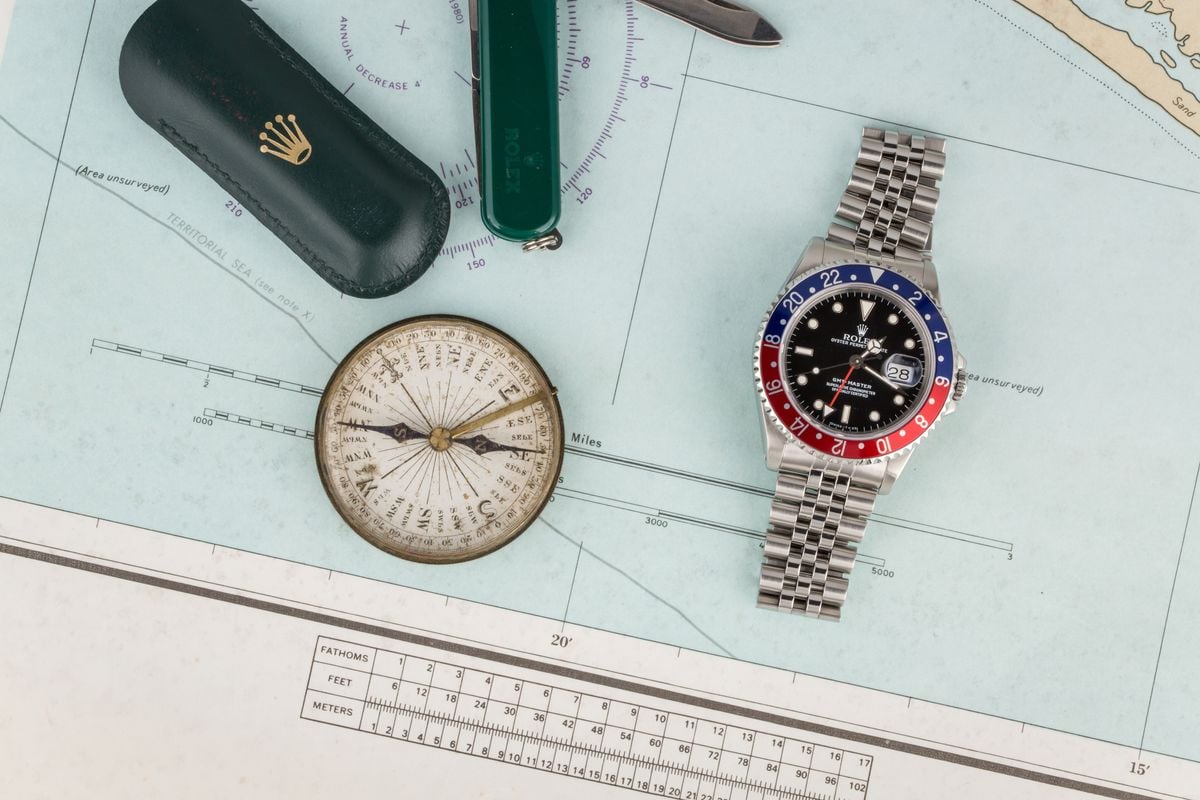 The GMT-Master ref. 16700 is often an overlooked Rolex reference – especially since at the time, it was competing with its more advanced GMT-Master II sibling. Yet, since it is the very last Rolex GMT-Master model, it represents a significant piece of the Rolex history and an interesting timepiece to have as part of  any luxury watch collection. 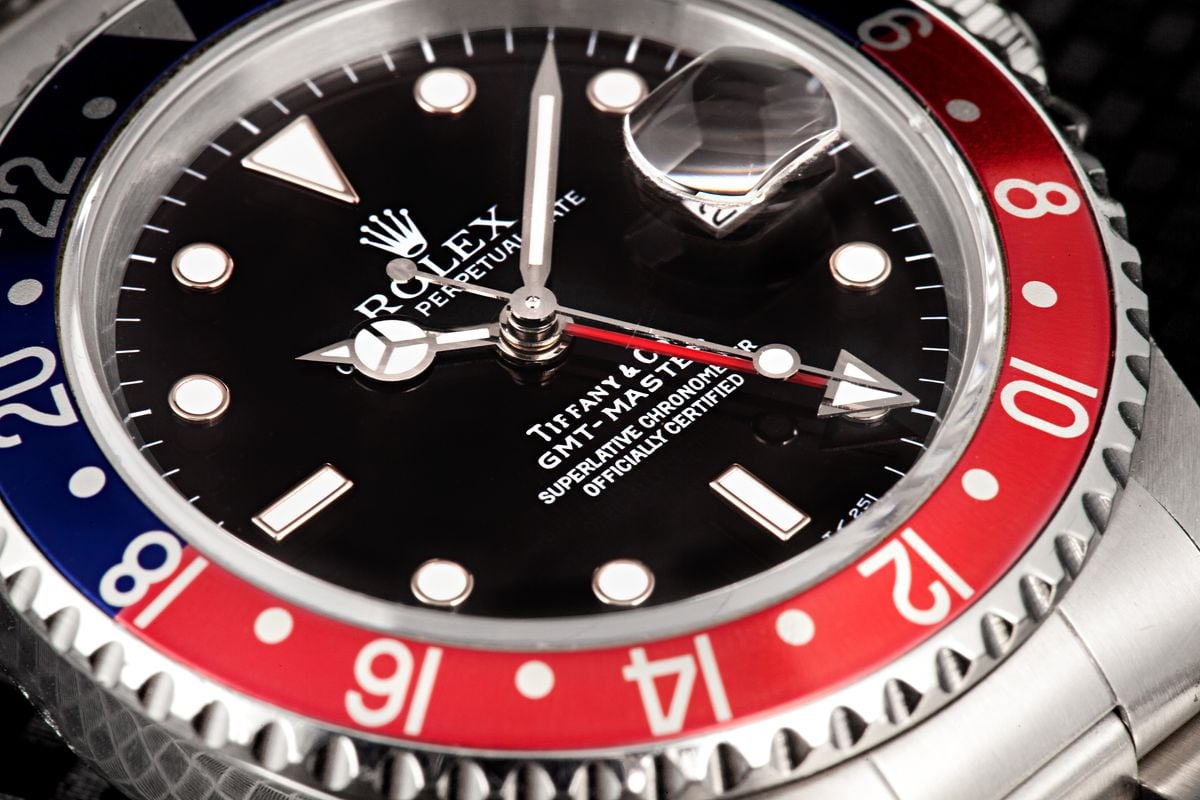