Bob’s Watches is proud to present our latest buyer’s premium-free ‘Fresh Finds’ watch auction: Iconic Watches of Hollywood – a celebration of the most famous and important watches from the world of cinema.

Showcasing a curated selection of 5 incredibly rare timepieces that have all been purchased directly from their original owners, each one of these remarkable watches has strong ties to Hollywood and filmmaking, whether it was due to their notable appearances in iconic movies or because they were the personal watch of choice for some of the industry’s biggest and most influential stars.

Bidding kicks off on Monday, November 16th at 9:00 AM (Pacific Standard Time) and it will run until the following Monday, November 23rd at 9:00 AM (Pacific Standard Time). As always, our ‘Fresh Finds’ auctions do not feature any buyer’s premiums whatsoever, so the price you bid is the price that you pay. Happy bidding everyone! 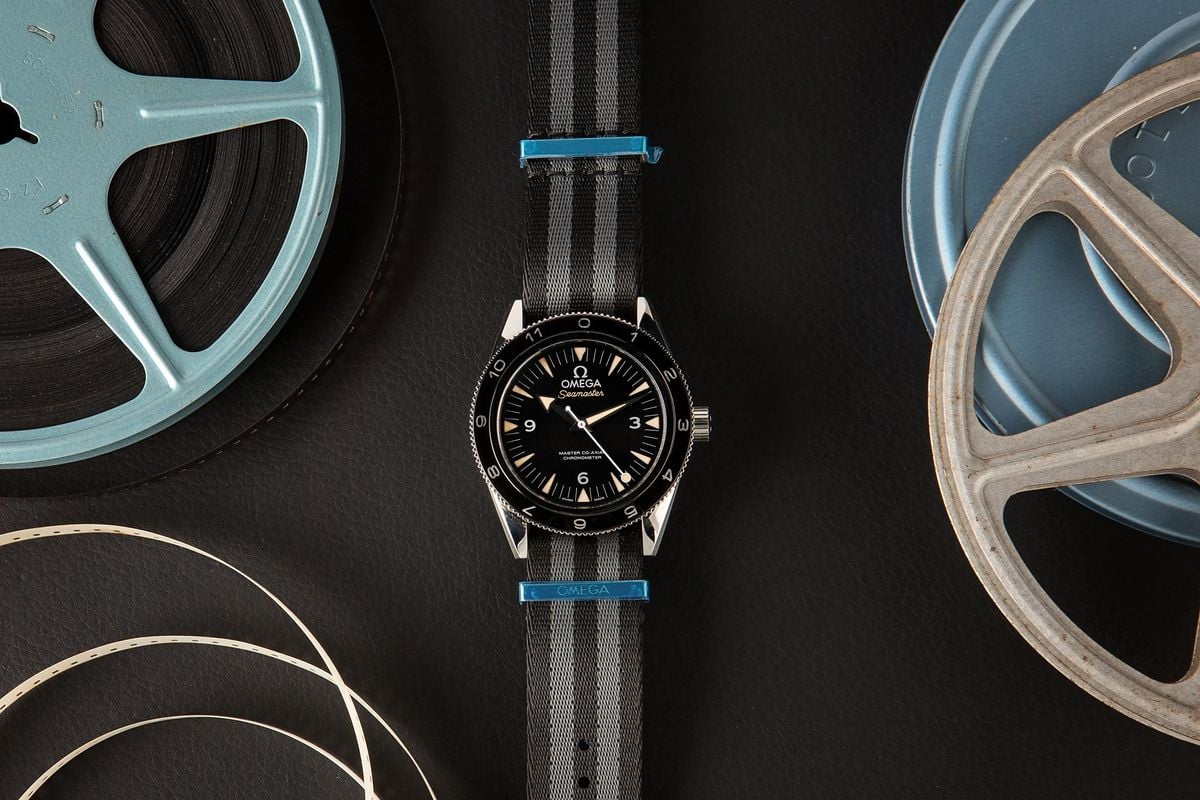 James Bond has worn many different watches over the years but ever since the 1995 release of Goldeneye, it has always been an Omega that has been on his wrist. As an official partner with the film franchise, Omega has supplied Agent 007 with a variety of different timepieces over the last 25 years. However, until the release of SPECTRE in 2015, James Bond has always worn a standard-production Omega watch, rather than one that was created specifically for the film.

In addition to playing a key role in the plot of the movie, the watch worn by Daniel Craig as James Bond in SPECTRE is a special version of the Omega Seamaster 300 dive watch, and it is not a standard option within the brand’s catalog. Featuring a vintage-inspired lollipop seconds hand and a black ceramic 12-hour bezel rather than the more common 60-minute variation found on the standard-production model, the watch worn on-screen in the film was later released to the public as an exclusive series of 7,007 units in the form of the Omega Seamaster 300 “SPECTRE” Limited Edition. 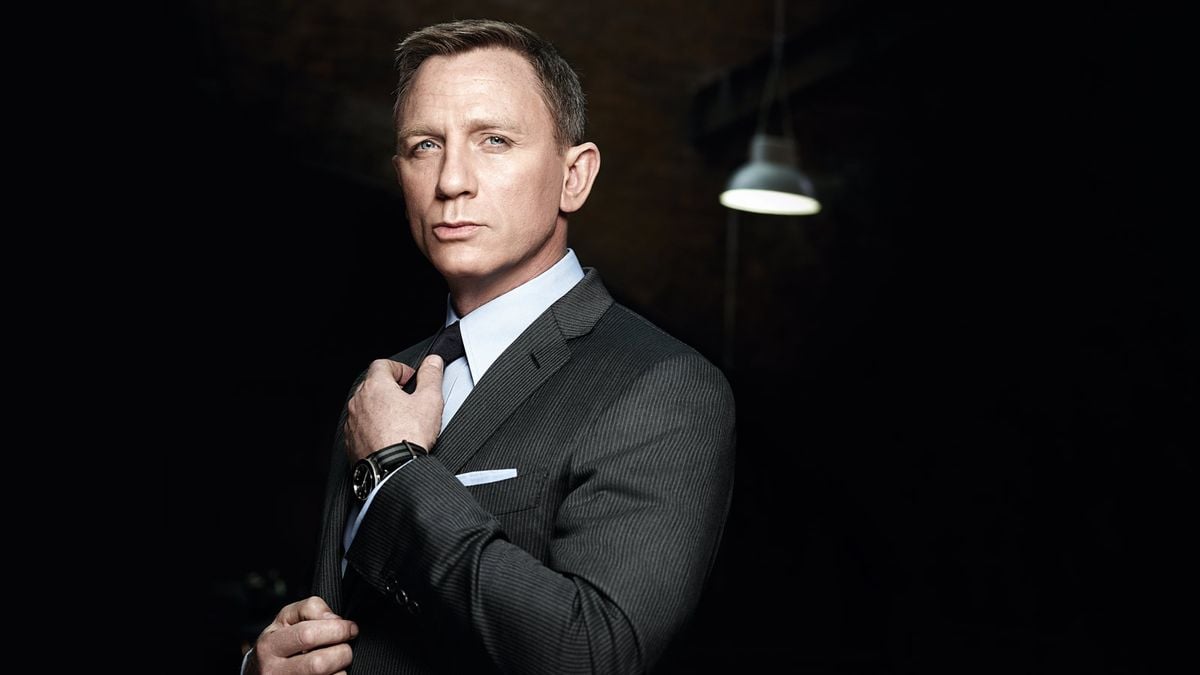 Over the years, Omega has produced a number of different limited-edition James Bond watches, but these have always been models that pay tribute to the franchise with 007-themed design elements, rather than being the actual watches worn on-screen in the films. Although the Omega Seamaster 300 “SPECTRE” Limited Edition celebrities the 20th anniversary of Omega’s partnership with the James Bond franchise, the dial side of the watch entirely lacks any reference to the movie, with the only mention of it being a small engraving along the perimeter of the watch’s sapphire display case-back.

Released in 2015 to coincide with the launch of the film, this Omega Seamaster 300 “SPECTRE” Limited Edition is individually numbered 4689/7007, and it is in mint condition, complete with its factory stickers, original box, warranty card, and all original packaging materials/accessories. Among the contents of its James Bond-themed presentation box is both a stainless steel bracelet and black/gray NATO strap – just like how the watch appeared in the movie – with both strap and bracelet in entirely unworn condition, complete with their factory stickers and appropriate “007” engravings. Widely considered by many to be the best James Bond Omega watch ever created (and long-since discontinued), this Omega Seamaster 300 “SPECTRE” Limited Edition is a true must-have for both watch collectors and 007 fans alike. 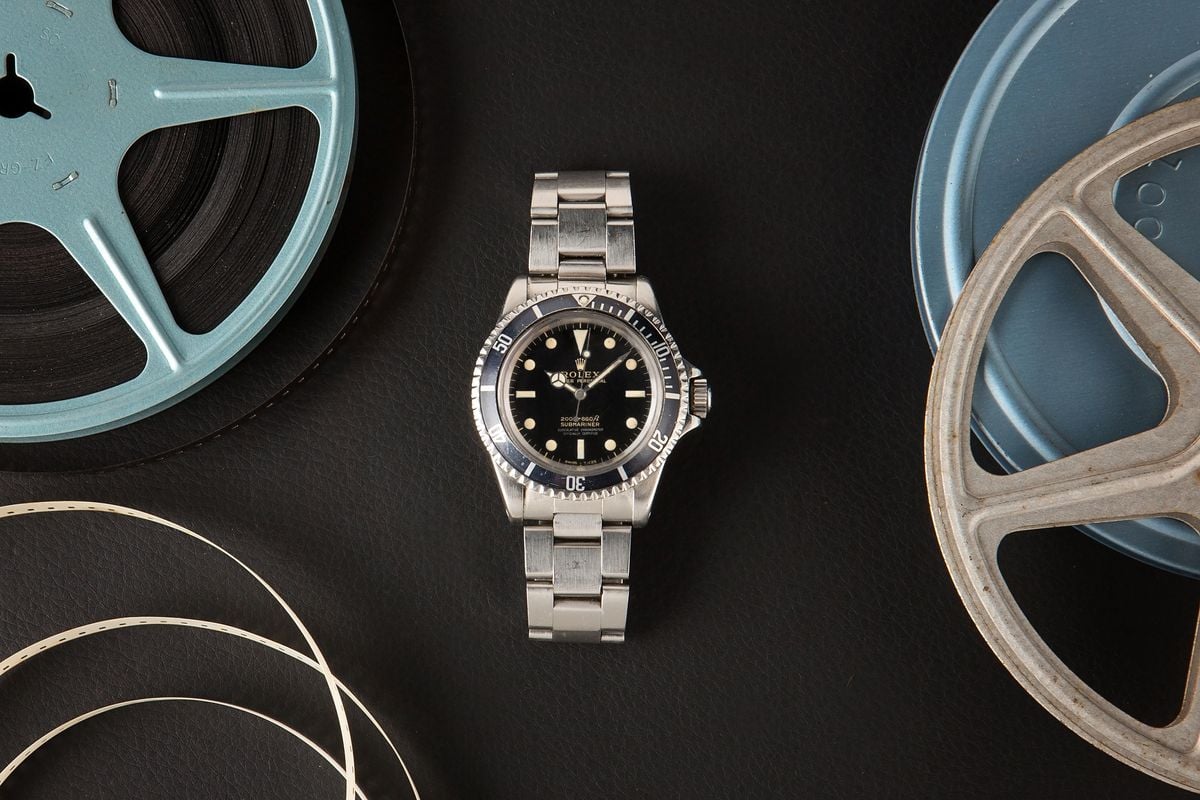 While some watches are famous for their appearances in iconic films, others are famous due to being the personal timepiece of choice for some of the biggest Hollywood celebrities of all time. While Steve McQueen wore a number of noteworthy watches in his various films, the one that he chose to wear in his personal life was the classic Rolex Submariner ref. 5512.

Countless photos exist of McQueen wearing his reference 5512 Submariner both while starring in his various films and while off-set during his personal life. As the man who was nicknamed the “King of Cool” and an individual who often portrayed characters who spoke more through their actions than their words, it seems incredibly fitting that Steve McQueen chose to wear a watch as timeless and classic as the stainless steel, no-date Rolex Submariner. 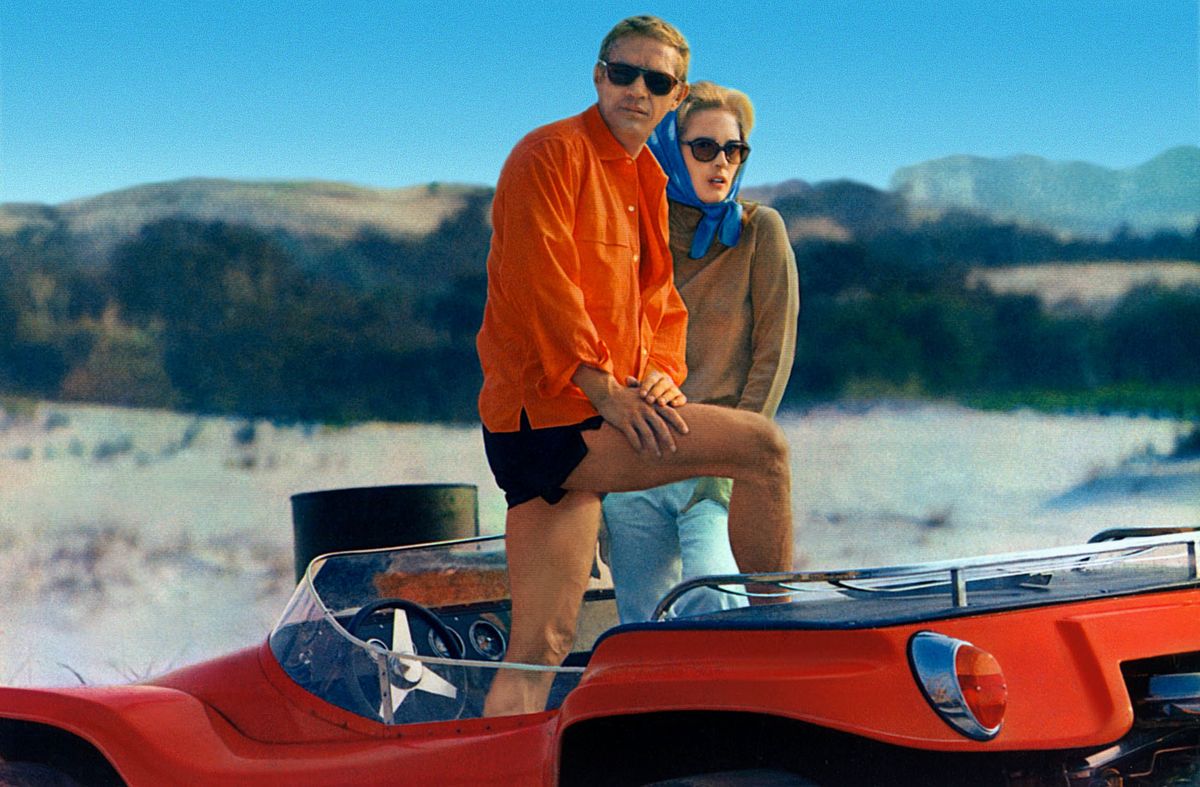 Introduced in 1959, the reference 5512 was the watch that first defined much of the Submariner’s immediately-recognizable aesthetic. As the first model to feature a 40mm case size and the first one to include crown-guards, the ref. 5512 makes the point in the Submariner’s history where Rolex’s legendary dive watch first started to take on its now-iconic form. Offering a COSC chronometer-certified movement, the reference 5512 was positioned as a more premium option within the Submariner line. Consequently, significantly fewer examples were manufactured and it had a much shorter production period than many of its contemporaries in the Rolex catalog.

This particular Rolex Submariner 5512 has an estimated production date of 1966, making it among the last of the reference 5512 Submariner watches to be fitted with a glossy gilt dial before Rolex made the switch to matte dials the following year. The original gilt dial is in excellent overall condition and features silver chronometer-certification text. Additionally, the tritium luminous material on both the dial and hands have developed a rich and creamy matching patina. Completed by a circa-appropriate, fat-font “long 5” bezel insert and its original Rolex box and chronometer certification papers, this Submariner ref. 5512 represents an excellent example of the model that first established much of the collection’s core identity. 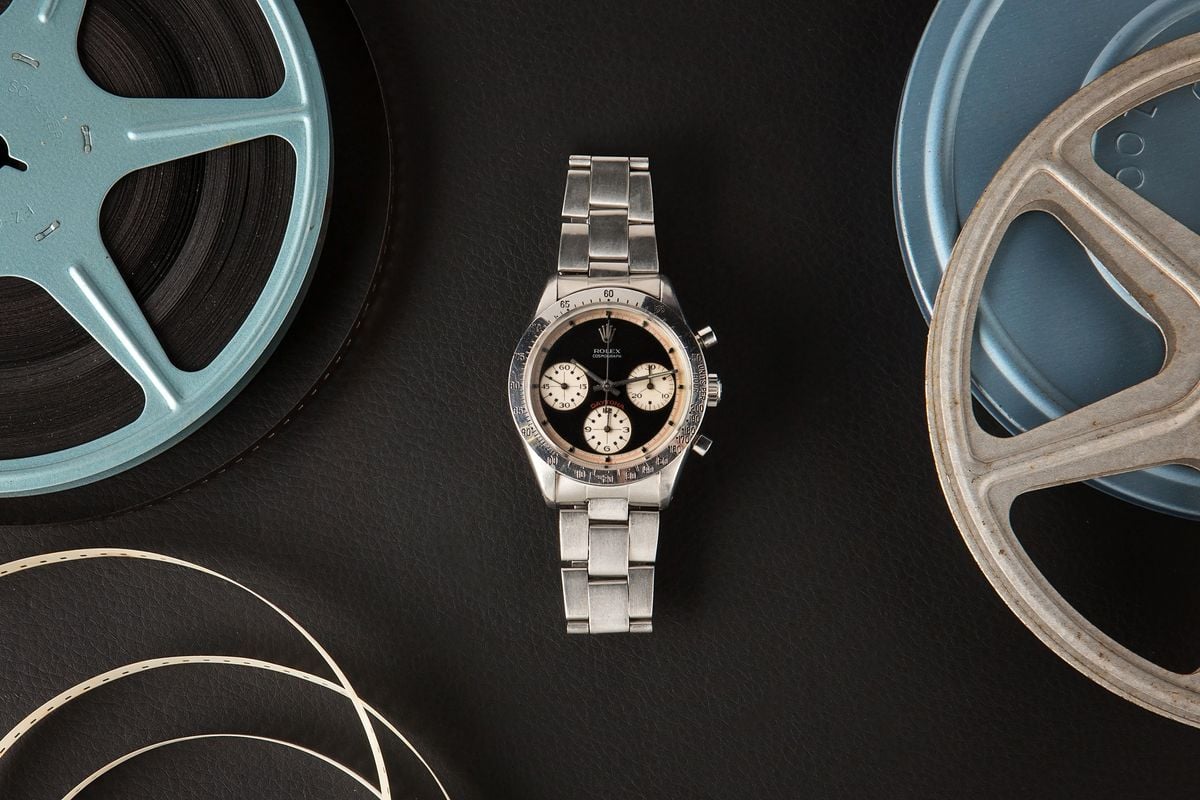 An absolute legend in the watch industry and often considered to be the poster child for the entire vintage watch market, the Rolex “Paul Newman” Daytona is easily the single most famous and recognizable vintage timepiece in the entire world. An undeniable grail watch in all of its various forms, the Paul Newman Daytona has achieved a near-mythic status as the timepiece that can be credited for much of the world’s interest in vintage watches and the record-high prices that exist within the industry today.

First launched in 1963, the reference 6239 is the very first Rolex Daytona model ever released to the public and the exact model that legendary Hollywood actor and namesake of the watch, Paul Newman chose to wear in his personal life. Characterized by their unique Art Deco-style font, it is estimated that these “Paul Newman” dials originally only represented about 1 in 20 of the total number of Rolex Daytona dials that were produced during the era, and due to their initial unpopularity among buyers at the time, many were replaced over the years and only a small fraction of that original number still exist today. 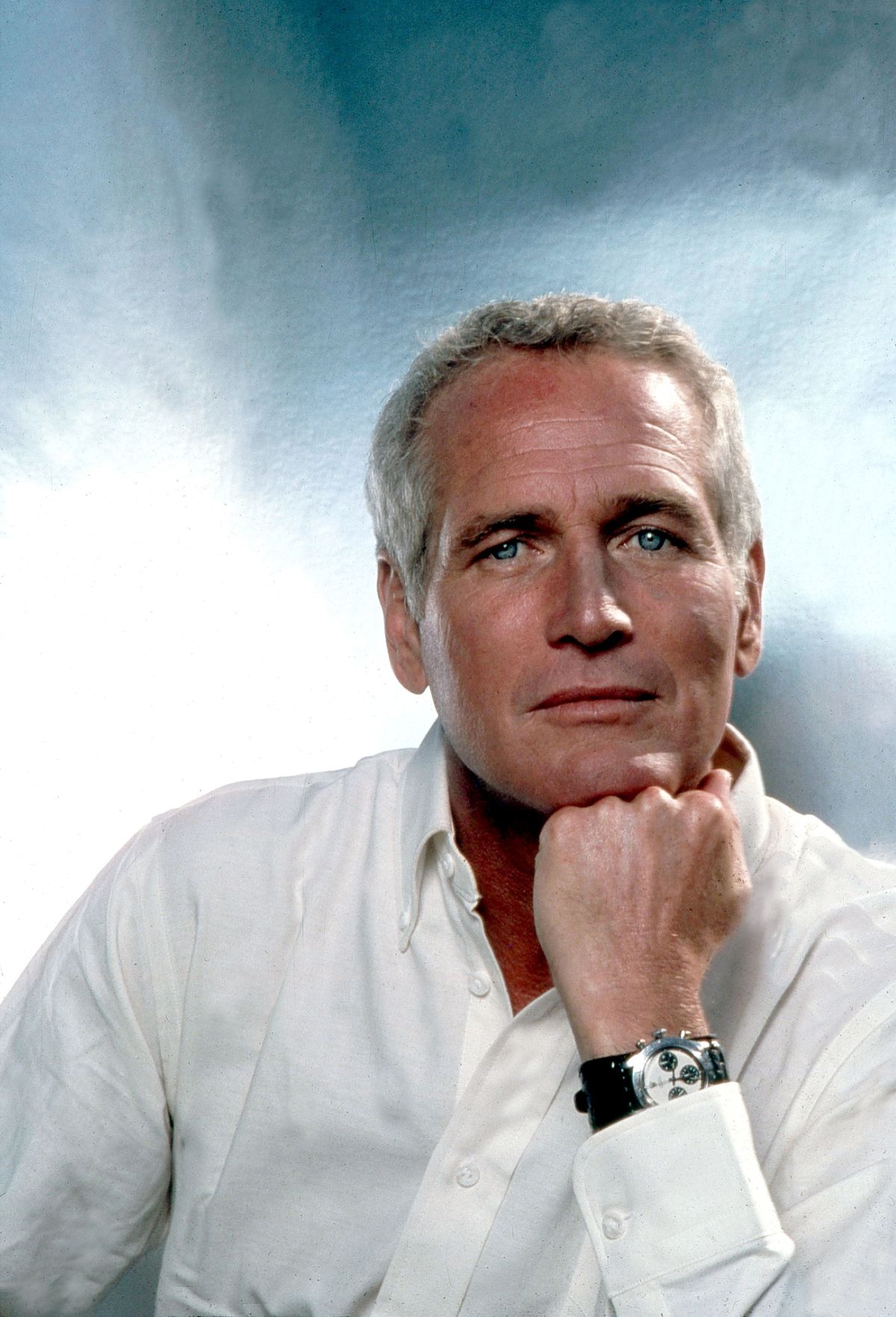 Another iconic watch that is more famous for its off-screen sightings than its appearance in any film, Paul Newman’s very own Rolex Paul Newman Daytona – a stainless steel reference 6239 fitted with a tri-color white dial – was a gift from his wife, Joanne Woodward. Countless photos exist of Newman wearing the watch, and when his exact ref. 6239 Daytona surfaced and sold at an auction in 2017, it achieved a final sale price of $17.75 million, making it the most expensive Rolex watch ever sold.

This particular Rolex Daytona 6239 has an estimated production date of 1968, and it features a tri-color “Reverse Panda” Paul Newman dial, which is characterized by its black surface with white contrasting sub-dials and bright red accents. Completed by an engraved stainless steel tachymeter bezel, pump-style chronograph pushers, and a circa-appropriate, folded-link Oyster bracelet, this rare and highly desirable Rolex Daytona is an excellent example of one of the most famous and desirable vintage watches in existence. 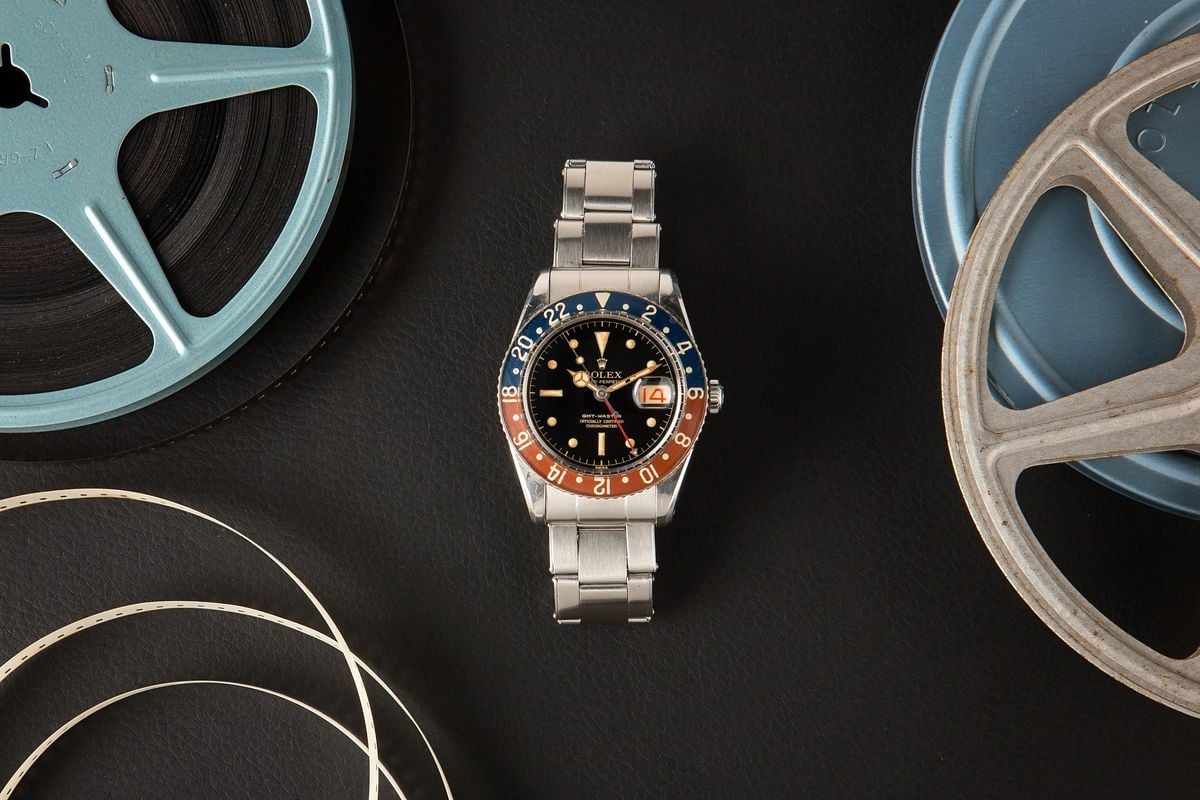 Alongside Sean Connery’s Submariner, another ultra-collectible vintage Rolex watch also appeared during the 1964 James Bond film Goldfinger, and just like the Submariner, that watch is now incredibly rare and sought after by collectors today. Nicknamed the “Pussy Galore” due to famously appearing on the wrist of the James Bond character of the same name (portrayed by Honor Blackman), the Rolex GMT-Master ref. 6542 is by far the rarest GMT-Master reference in existence and one of the most collectible vintage Rolex watches of all time.

Produced between 1955 and 1959, the reference 6542 was the very first GMT-Master watch that Rolex ever produced and it represents the brand’s original vision for its multi-timezone pilot’s watch. Created specifically to meet the request of Pan Am Airlines for a timepiece that its pilots could use on intercontinental flights, the ref. 6542 features a number of characteristics that immediately separate it from all other Rolex GMT watches, including its 38mm case, lack of crown-guards, and Bakelite bezel insert. 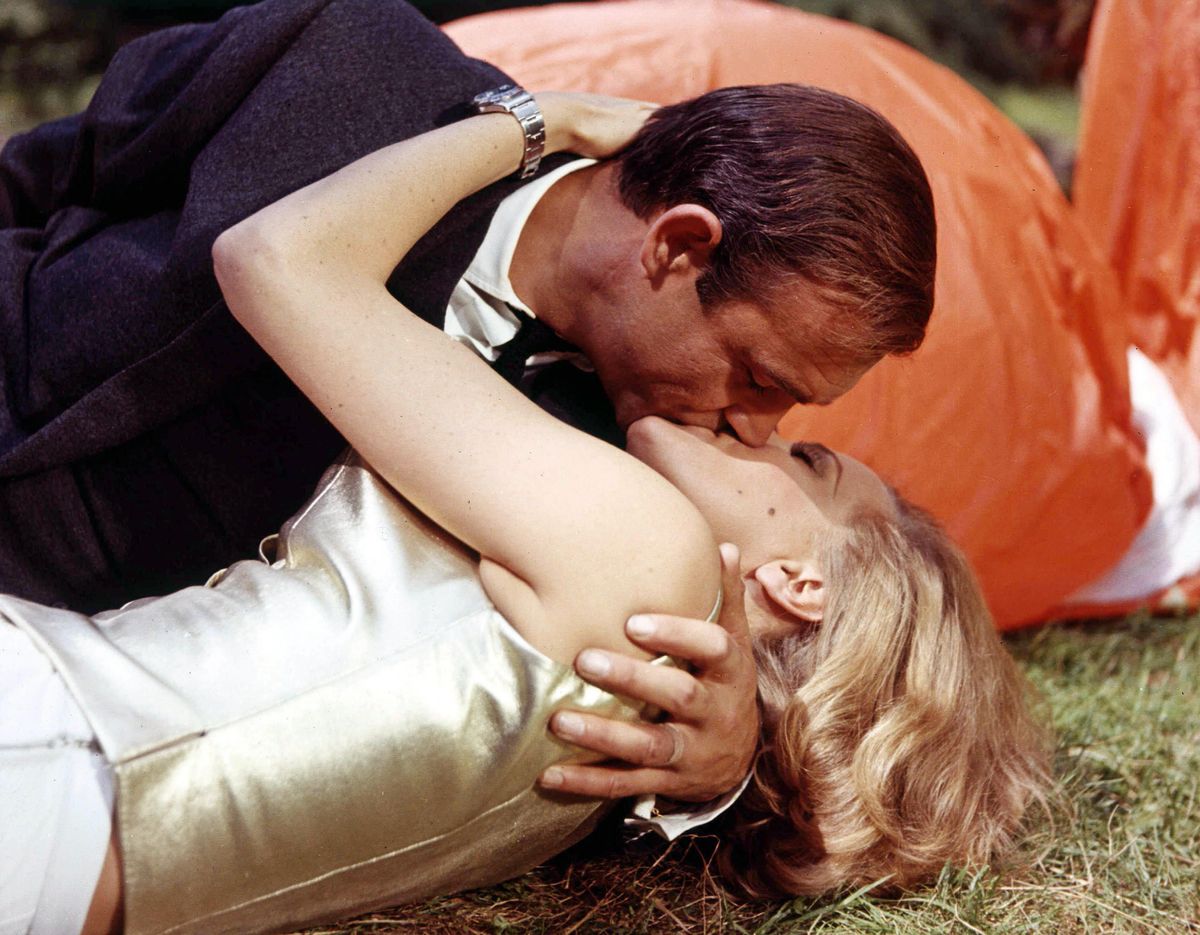 In addition to being the same features that made the watch immediately identifiable on the wrist of Honor Blackman during the 1964 James Bond film, they are also the exact same traits that make the Rolex GMT-Master 6542 so rare and collectible today. Among the relatively small number of reference 6542 watches that were produced, the vast majority no longer have their original Bakelite bezel inserts with glowing radium numerals. Many of these inserts had issues with durability, and Rolex even recalled the component in 1959 due to potential concerns about its radiation levels.

This particular Rolex GMT-Master 6542 has an estimated production date of 1958, making it among the last examples to be fitted with a Bakelite bezel insert before Rolex made the switch over to aluminum bezels the following year. Additionally, as is correct for the reference 6542, this example is fitted with a beautiful glossy gilt dial with chapter ring markings and a small GMT hand. The original Bakelite bezel is in extraordinary well-preserved condition, and the watch is completed by a circa-appropriate, expanding rivet-link Oyster bracelet. The originator of the Pepsi bezel and a true icon in both cinema and horology, this ref. 6542 is an exceptional example of easily the most collectible Rolex GMT-Master reference of all time. 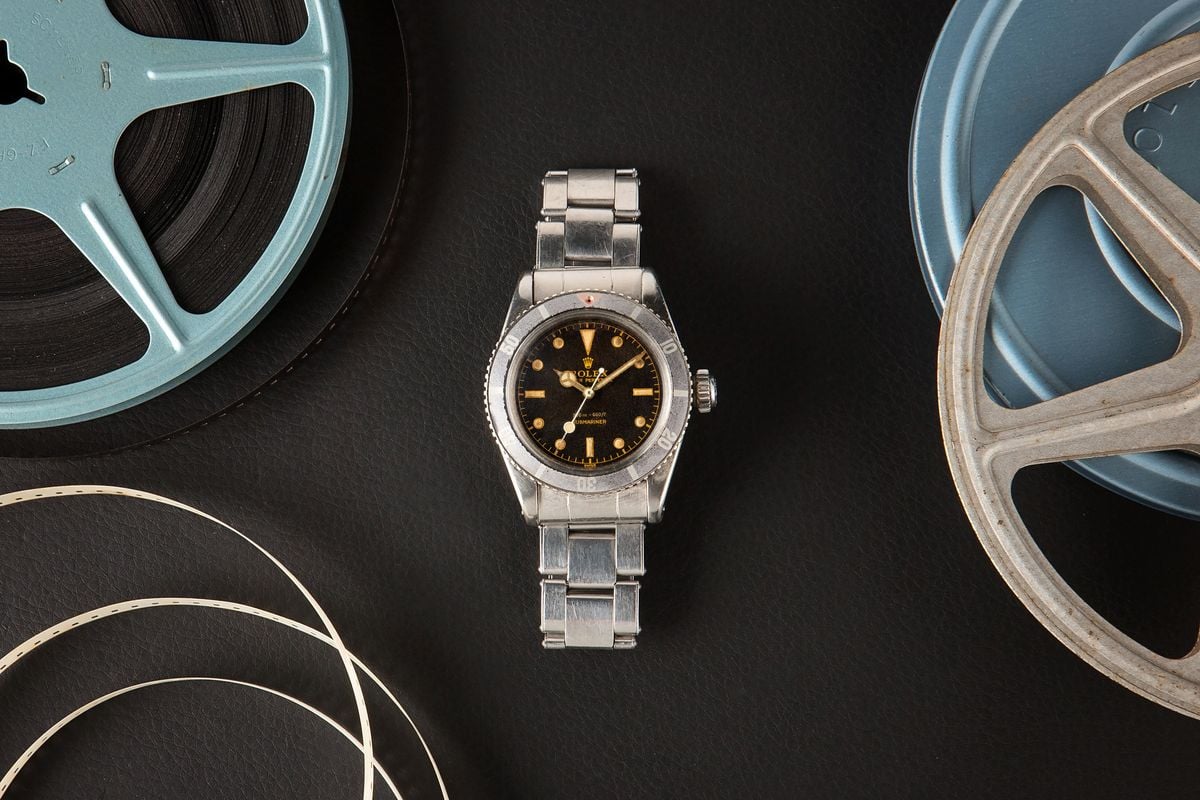 Arguably no watch in the history of cinema has played a larger role in a major film franchise than the one worn by James Bond. Regardless of whether it was fitted with secret spy gadgets or simply just looked great on his wrist as he reached out to grab an ice-cold shaken martini, James Bond’s watch has captured the imaginations of both watch collectors and film enthusiasts alike for the last fifty years.

The very first watch that was ever worn by James Bond was the Rolex Submariner ref. 6538, which first appeared on the wrist of Sean Connery in the inaugural James Bond film from 1962, Dr. No. Connery would go on to wear that same Rolex Submariner for the next several films, including From Russia with Love (1963), Goldfinger (1964), and Thunderball (1965). While Agent 007 has worn many different timepieces over the years, for many collectors, it will always be the big-crown Submariner ref. 6538 that is the quintessential James Bond watch. 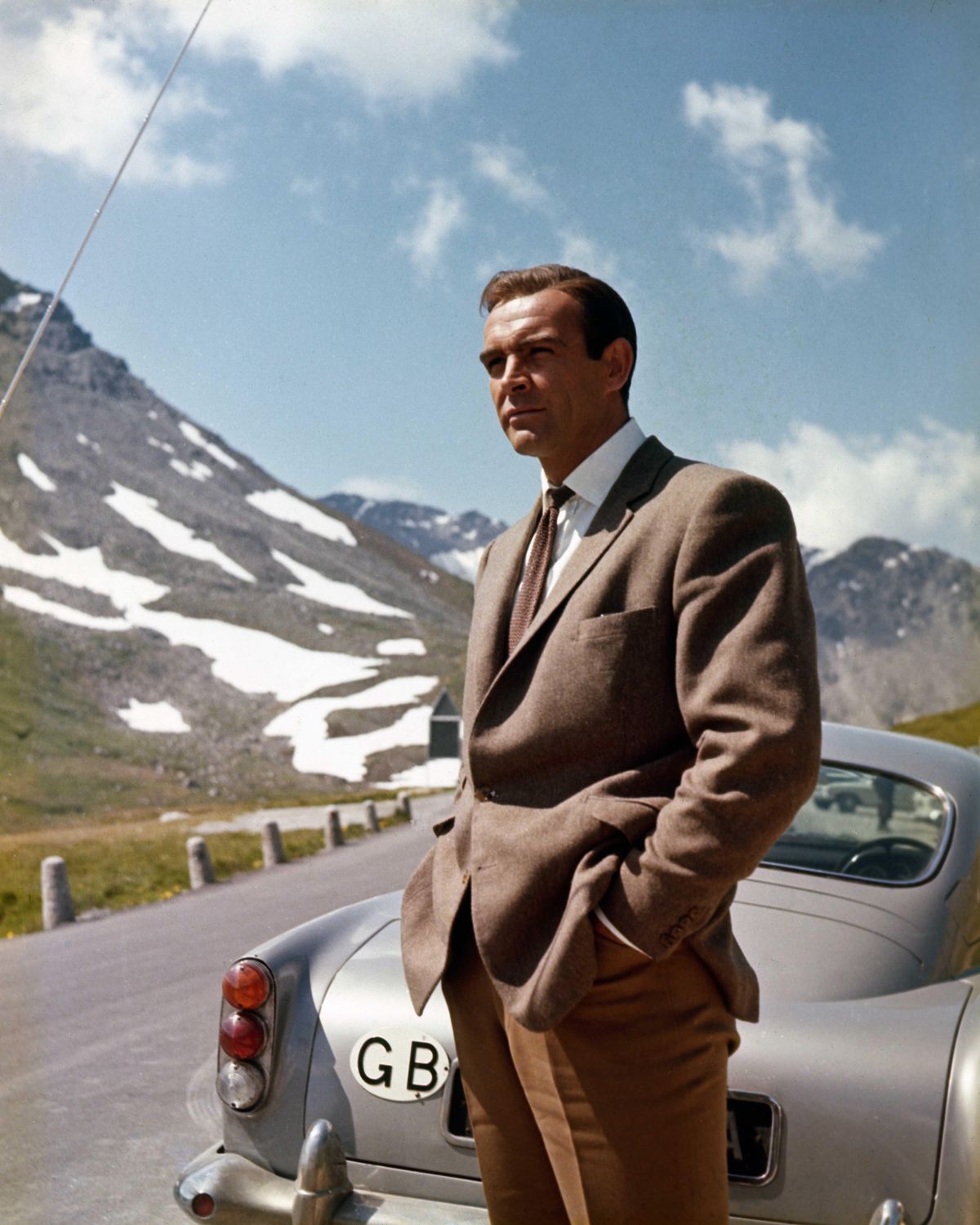 In addition to its highly-regarded place within cinema history, the reference 6538 is also a grail watch for many Rolex aficionados, and it is arguably the single most desirable vintage Submariner in existence today. Produced for only a handful of years between 1955 and 1959, the ref. 6538 is immediately identifiable from later-era Submariner generations due to its 38mm case, red triangle bezel insert, 8mm oversized winding crown, and complete lack of crown guards.

This particular Rolex Submariner 6538 has an estimated production date of 1957, placing it right in the middle of this historic reference’s relatively short production run. Just like the exact watch worn by Sean Connery in the original James Bond films, this example features a 2-line gilt dial that has developed a rich patina on its original radium hands and hour markers. The watch is fitted with a stunning red-triangle ghost bezel insert and completed by a circa-appropriate, rivet-link Oyster bracelet. Incredibly rare and highly collectible, this James Bond Rolex Submariner ref. 6538 is an excellent example of one of the most famous and important watches from the history of cinema.