Not all blues are created equal. Smurf blue, Batman blue, Deepsea blue — all totally different. Despite all being a similar variation of the rich, pigmented blue we’ve come to know and love from Rolex, they all boast a very different feel and aesthetic. Especially in context.

Contrasted against black bezels, blue bezels, yellow gold, white gold, stainless steel, and Everose — let alone their different dial variations — these blues all start to look drastically distinct. However, something about the blue dial on the Rolex Sky-Dweller has particularly made people soar over this watch since its release. Lucky for you, I’m going to tell you exactly what it is. 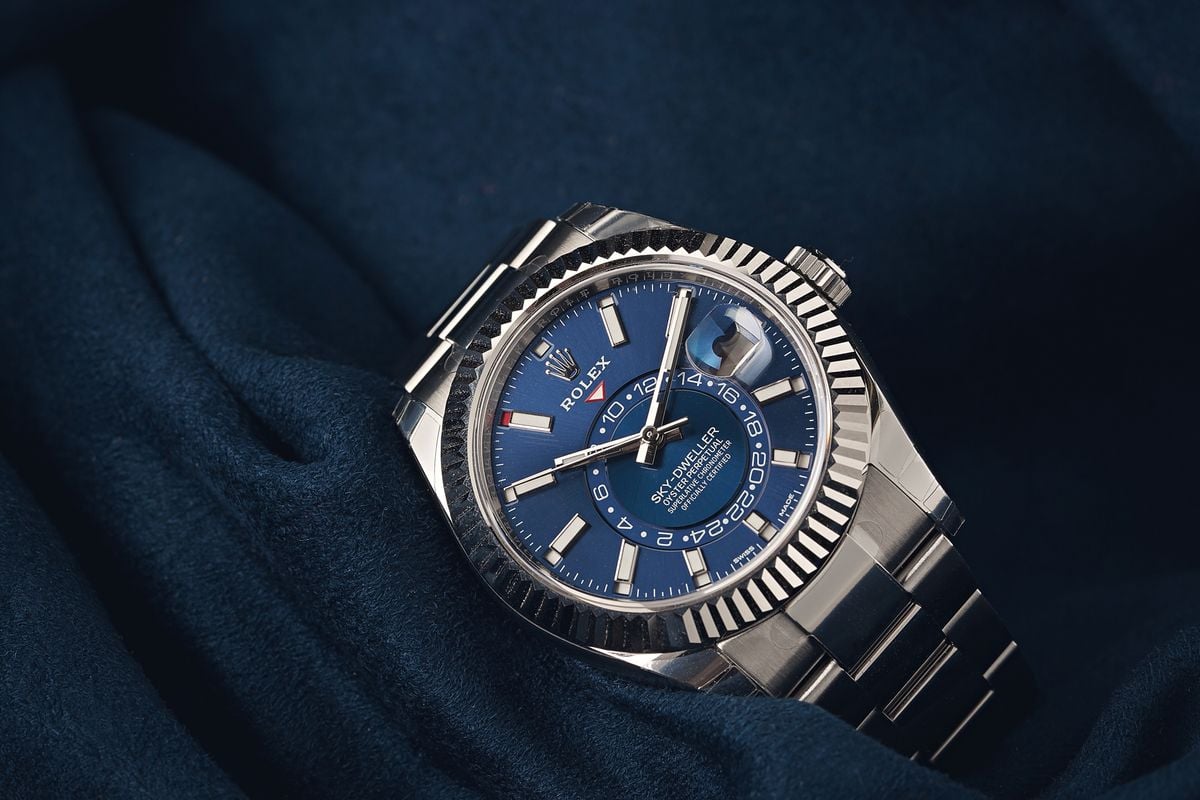 The Rolex Sky-Dweller is having a moment

The Sky-Dweller has largely had a problem getting off the ground since its introduction in 2012. Despite slick looks, incredible mechanical ingenuity, and a direct appeal to the world’s growing jet-set, this watch received little appreciation upon its initial release.

Much of that can be attributed to the fact that it was only available in solid 18k gold for about five years, giving it a hefty price tag and also making it a bit heavy to wear on the wrist. Although the Rolex Sky-Dweller wasn’t part of the brand’s professional line, the watch offered advanced functionality. 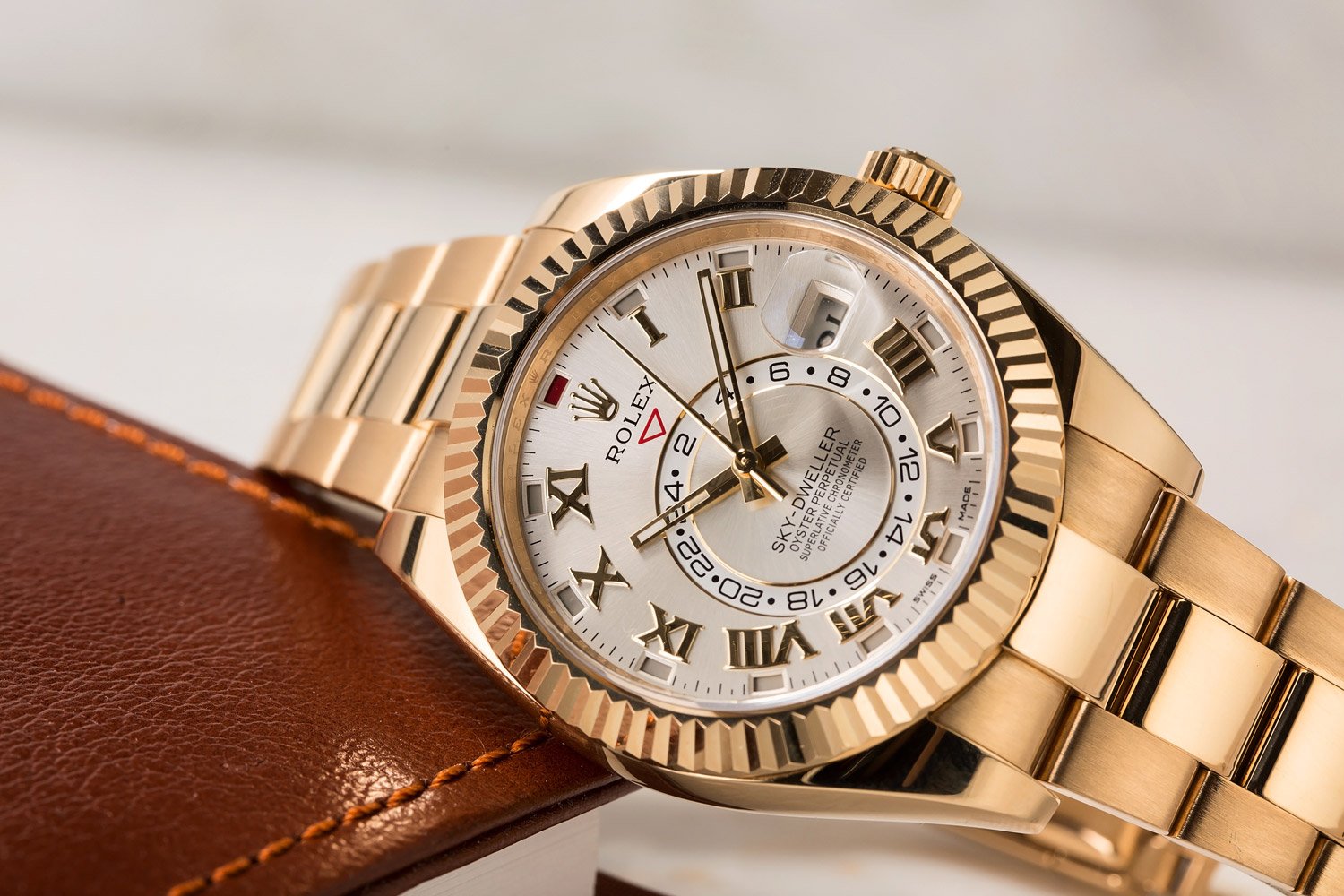 Outfitted with the company’s most sophisticated movement to date, the Caliber 9001, the Sky-Dweller was made to work. It not only keeps track of two time zones, but it can also display the month, date, and even offers an annual calendar complication named SAROS that can distinguish between months with 30 and 31 days.

So when Rolex introduced the Sky-Dweller in Rolesor – what the brand calls the combination of stainless steel and gold on a single watch, it instantly became more enticing. Not only was it now significantly more affordable, but it also felt more wearable. 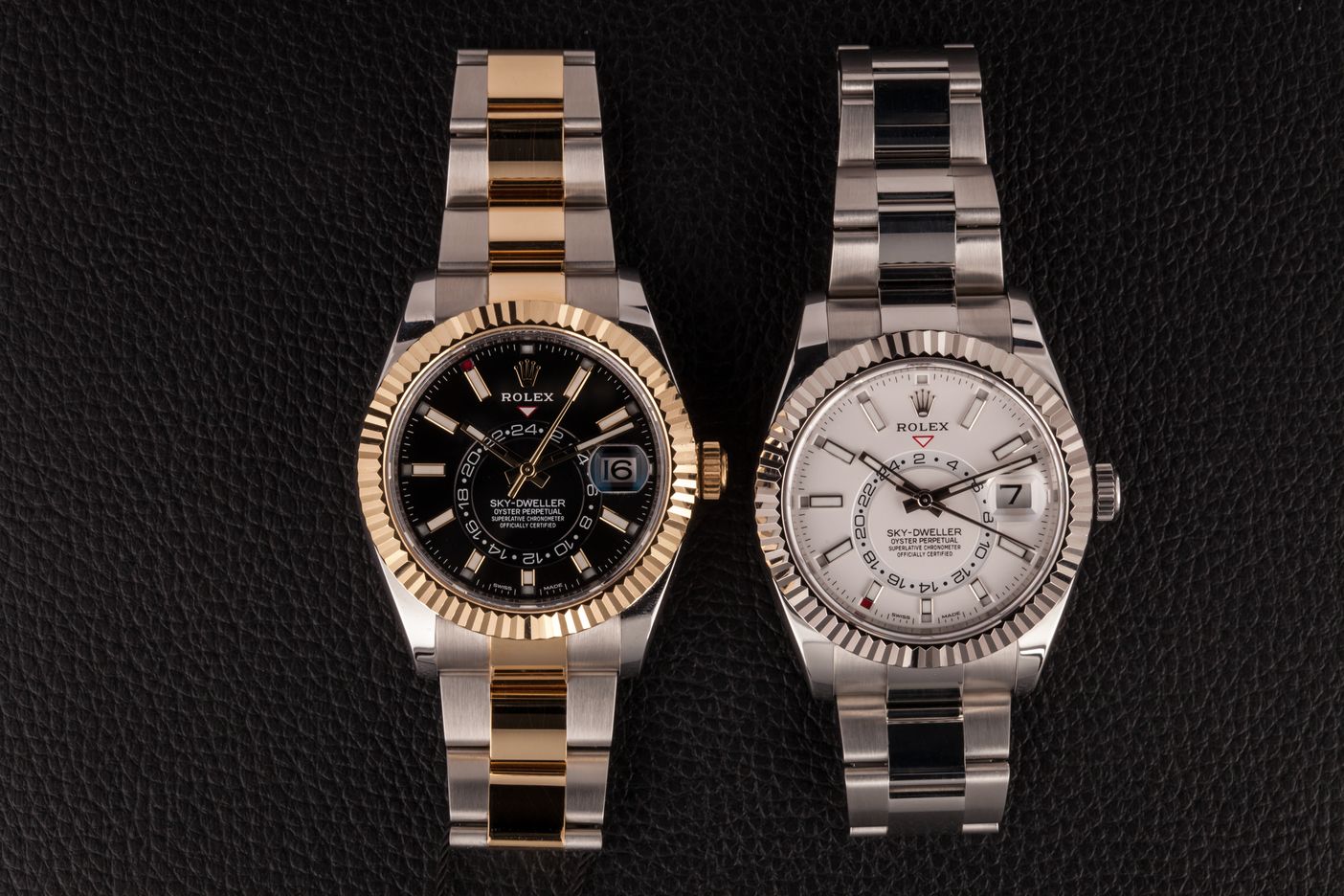 Blue is the future of the Sky-Dweller

Blue has been an exceedingly popular color for Rolex over the last few years. When they upgraded their Submariner bezels to Cerachrom, the classic blue color profile was carried over onto the next generation of watches. Additionally, on the Batman GMT-Master II, Rolex decided to introduce an all-new blue and black Cerachrom bezel, which made the watch immensely popular, creating waitlists at dealers the morning it was announced. And don’t get me even started on the Yacht-Master II and its blue bezel against its stainless and Everose gold Rolesor case and band.

So, the fact that the blue dial version of the Rolex Sky-Dweller is popular actually shouldn’t be too much of a shock. Blue has always been big for the brand. I think the general shock really stems from the fact that people are just starting to notice and appreciate this watch collection as a whole. However, that’s not to take away from the fact that the blue face on this watch is, undeniably, superb. So much so, that I think the addition of the blue face alongside alloy changes is what is going to cement this watch as a long-time favorite among collectors. 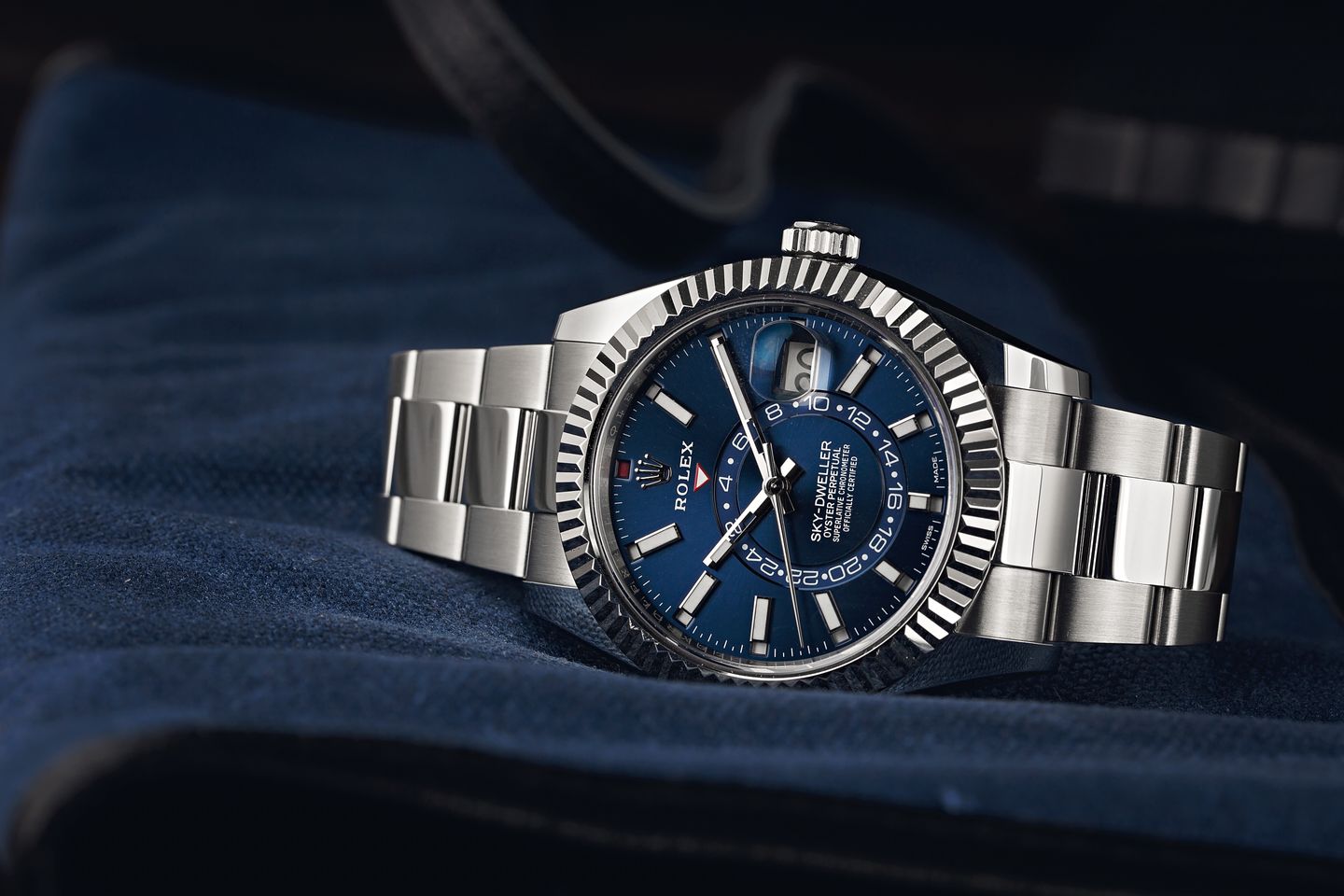 Let’s look at it, shall we? The hue of the blue is cool, dark, and elegant. It has a steely quality that matches the case and band, yet, totally pops against the shimmering white gold fluted Ring Command bezel. The blue face is refined yet adds personality and readability to the watch that’s lacking in the drowned-out-white dial and the sterile black dial version.

What the blue dial offers is something different – something inviting and wearable. Luxurious yet attainable. It’s everything the Rolex Sky-Dweller didn’t represent when it was first released in 2012. The new blue dial is, quite literally, the new face of the watch. It’s what I see propelling this watch into a major success, far more long-lasting than the initial hype that we’re seeing today. 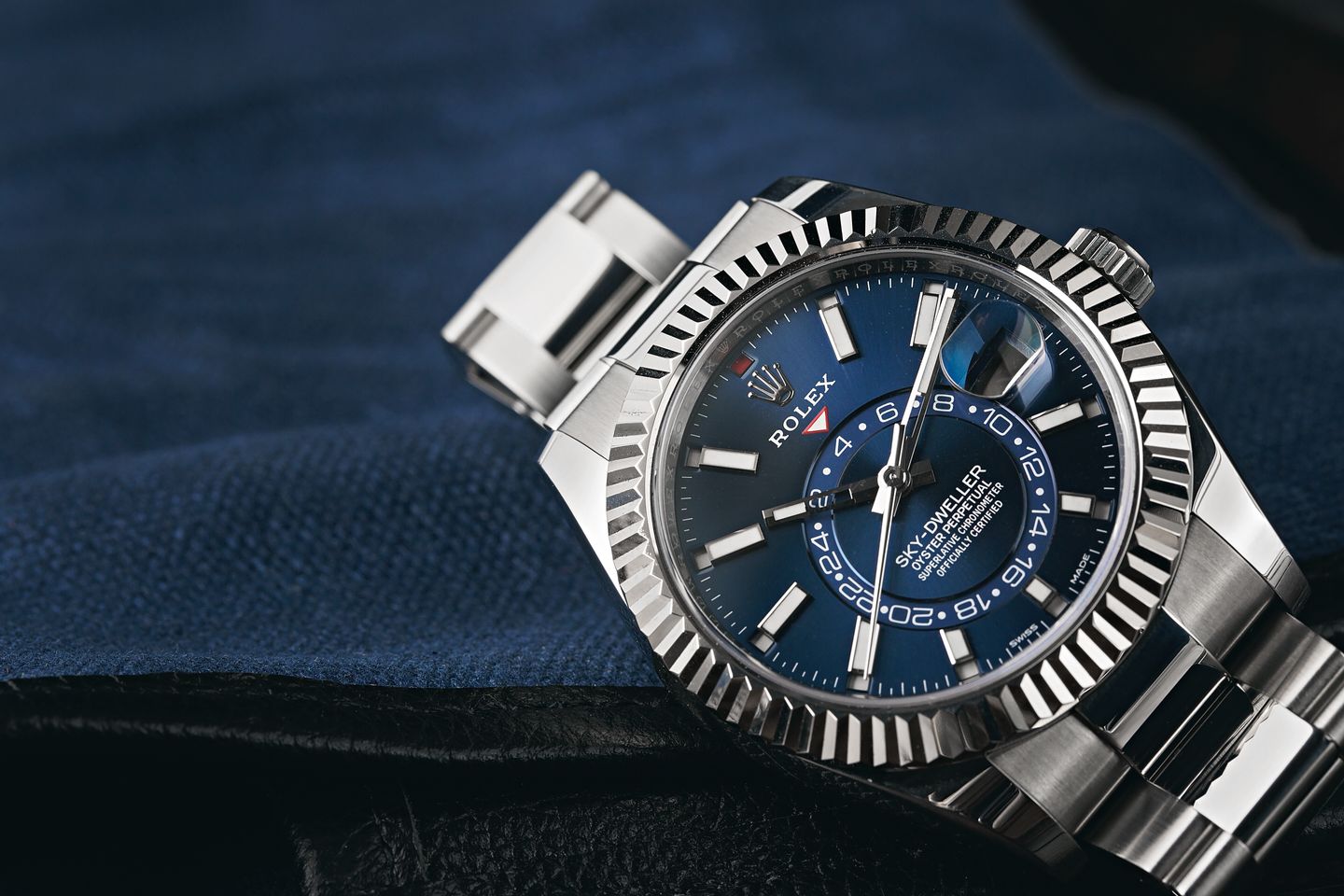