Since his breakthrough role in Christopher Nolan’s film Inception in 2010, Tom Hardy has shot to fame to become one of the leading actors of his generation. Whether playing villains in comic book based blockbusters, performing in hit television series, or taking on dramatic roles in Oscar-nominated films, Tom Hardy is a celebrity that is respected and admired by many. As his career has progressed, we’ve also noticed an evolution of the Rolex watches he wears. Read on to find what which Rolex watches Tom Hardy likes to wear. 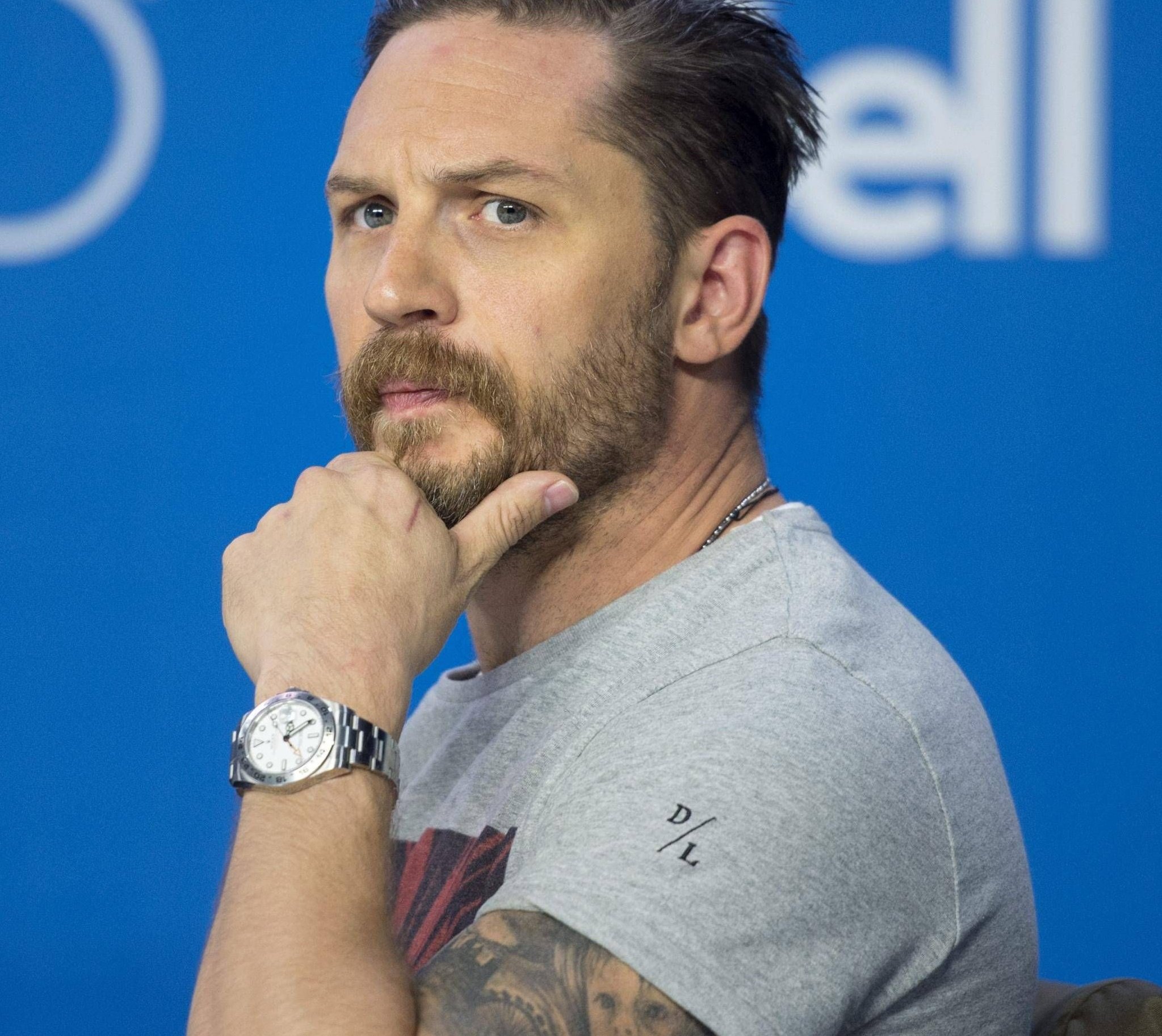 When Tom Hardy stepped out to promote the film Legend at the 2015 Toronto International Film Festival, he had the Rolex Explorer II ref. 216570 on his wrist. With a large 42mm stainless steel case, white “Polar” dial, and bright orange accents, this is one rugged Rolex sports watch that speaks to the adventure-set.

Style aside, the Explorer II ref. 216570 is also a practical watch to wear for travelers since its orange 24-hour hand on the dial indicates a second time zone by pointing to the fixed 24-hour marked steel bezel. Perfect for the UK native who has to constantly travel for work. 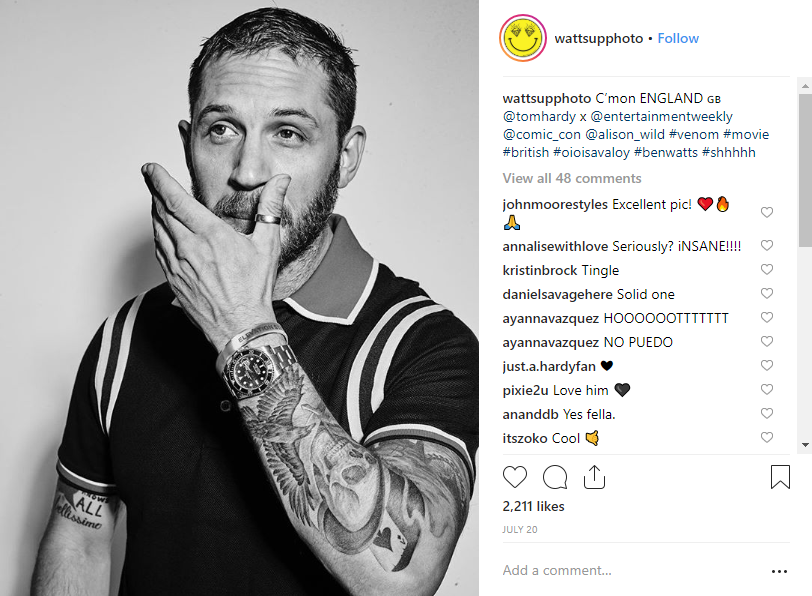 During San Diego Comic-Con 2018 earlier this summer, Tom Hardy was on site promoting his latest film, Venom. This time, Tom Hardy opted for the classic Rolex Submariner as his watch to wear during the event.

Tom Hardy’s particular model is the current Submariner Date ref. 116610LN with a 40 mm stainless steel Oyster case, stainless steel Oyster bracelet, black Cerachrom ceramic bezel, black dial with a date window at 3 o’clock, and a sapphire crystal with the protruding Cyclops magnification lens. A Rolex dive watch that enjoys its own celeb status as one of the most famous luxury watches in modern horology. 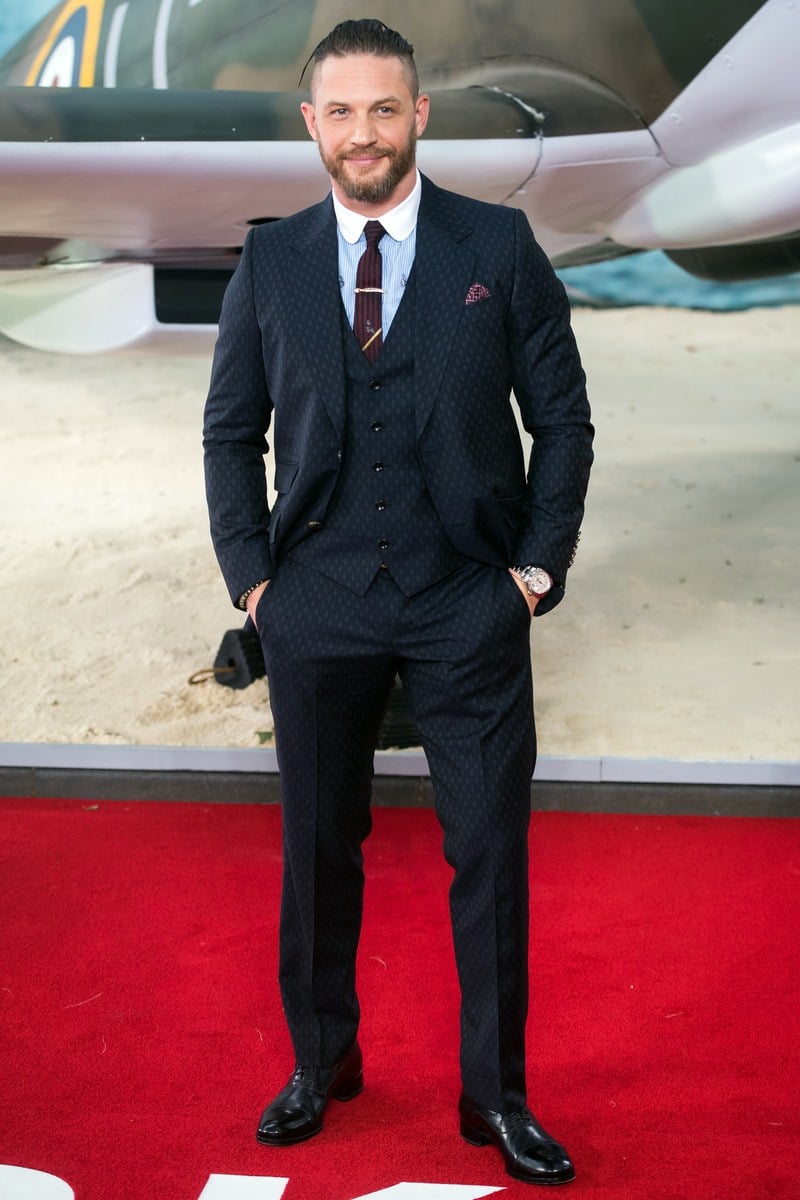 Tom Hardy at Dunkirk premier suited up in a fancy suit with a Sky-Dweller. (Image Credit: GQ)

When Tom Hardy gets in a dark suit—as he did for the Dunkirk premiere in 2017—he pairs his digs with a dressier Rolex watch: the Sky-Dweller ref. 326934.

While the Sky-Dweller ref. 326934 is in (what we can assume is Tom Hardy’s favorite watch metal) stainless steel, it does also include an 18k white gold fluted bezel on the 42mm Oyster case for a touch more formality.  What’s more, as one of Rolex’s most complicated modern timepieces complete with a two time zones, date window, month display, and annual calendar, it’s a watch that can keep Tom Hardy on top of his busy schedule.

Judging by these three models, it’s clear that Tom Hardy likes his Rolex watches to be modern, constructed in steel, and 40 mm or larger. Yet, despite some similarities, each of his Rolex watches—the Explorer II, the Submariner, and the Sky-Dweller—offer its own unique style and functionality.