Many collectors look down at their Rolex watches and see what appears to be a tiny Mercedes-Benz logo sitting near the tip of the hour hand. This feature, now a ubiquitous characteristic found on countless models from a myriad of different manufacturers, first made an appearance on Rolex sports watches during the mid-1950s. These days, this style of handset is universally referred to as “Mercedes-style” hands, but why do Rolex watches use Mercedes hands and more importantly, what does it mean?

Below we take a closer look at Rolex Mercedes hands and go over some popular myths about why the world’s most famous luxury watch manufacturer has decided to make this unique design element a hallmark feature on so many of its most iconic sports models. 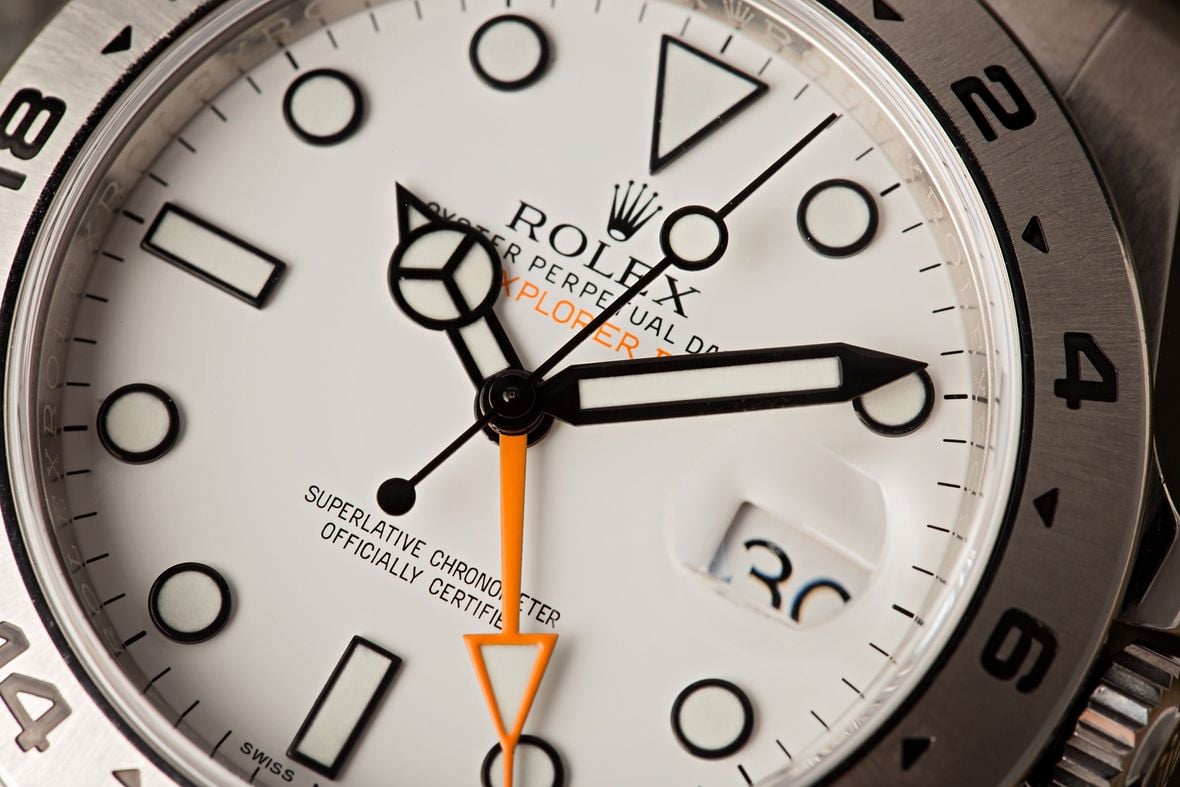 Click here for a closer look at some of our favorite Rolex sports watches. 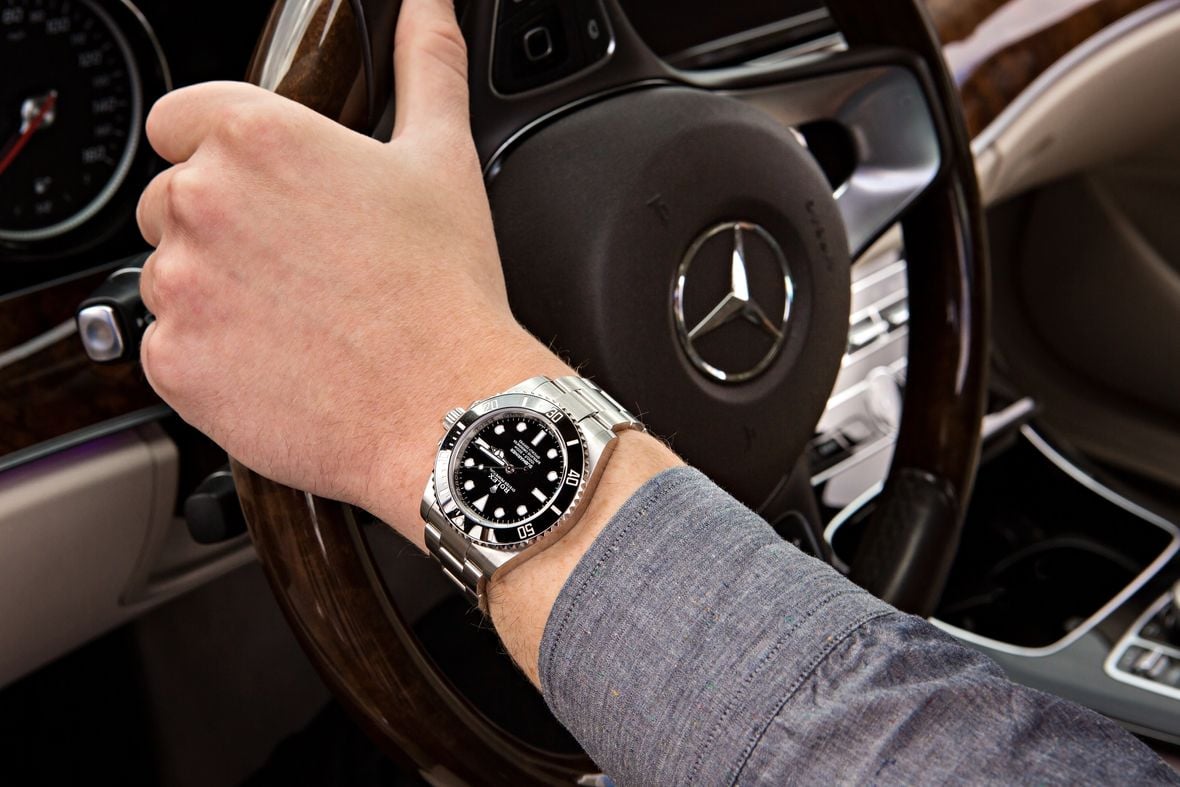 The emblem of Mercedes-Benz, the internationally renowned luxury automotive manufacturer, is easily among the most famous company logos in existence, and examples of it can be found scattered throughout virtually every corner of the globe. The actual Mercedes-Benz logo is a three-pointed star, with each point representing a different method of transportation: land, sea, and air.

There are some collectors and enthusiasts who believe that Rolex chose a similar motif for the hour hands of its sport watches to represent the different environments that its original tool watch collections were intended to conquer: Explorer (land), Submariner (sea), and GMT-Master (air). However, Mercedes style hands can be found on certain Rolex watches that pre-date the launch of the GMT-Master, and while there is always the possibility that the “air” environment is represented by the early Rolex watches that were worn by pilots during WWII, it is rather unlikely that this is the explanation for the Mercedes-style hour hand on Rolex sports watches. 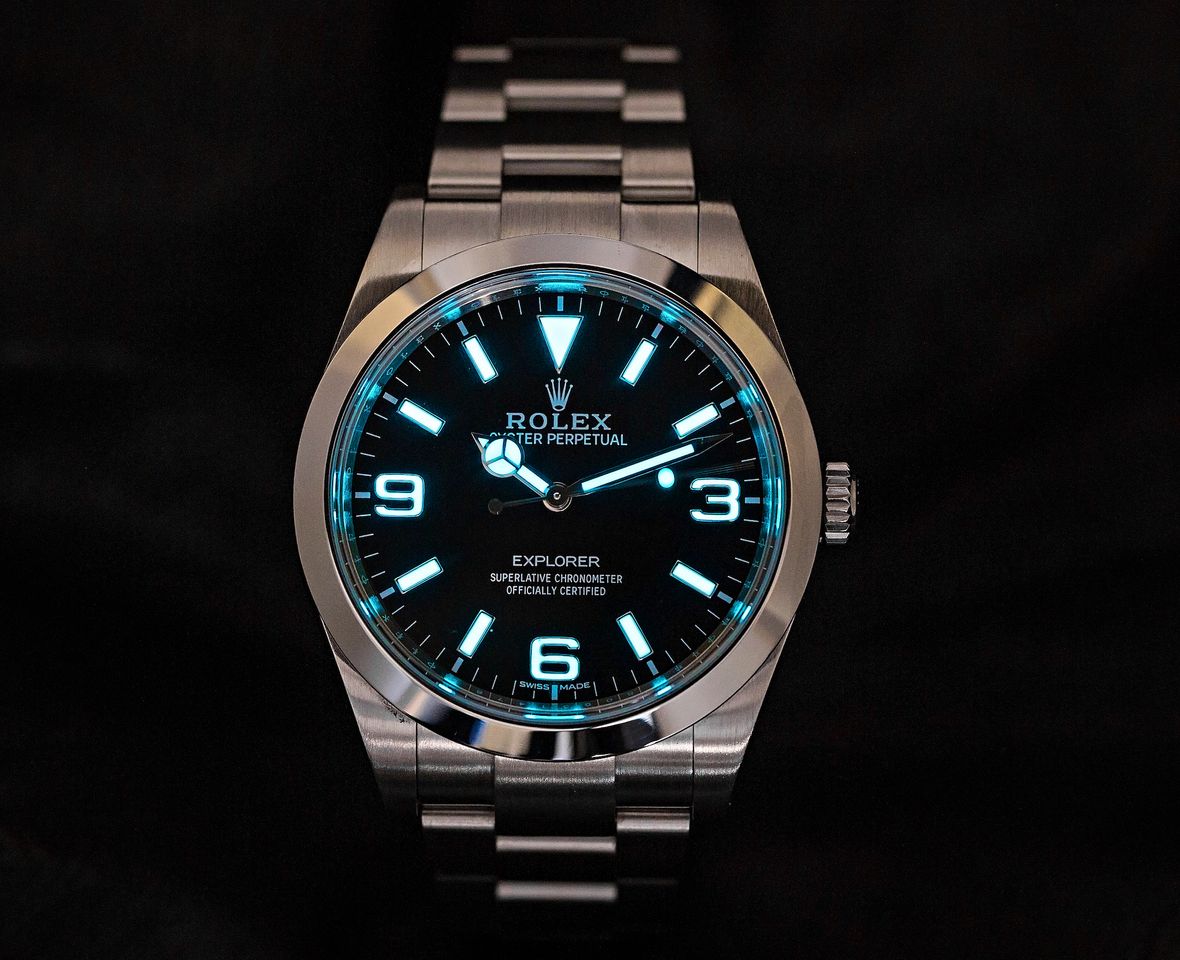 Another popular theory is that Rolex’s Mercedes hour hand is an allegorical reference to British professional swimmer, Mercedes Gleitze. During her famous 1927 swim of the English Channel, Gleitze wore a Rolex Oyster around her neck, and the watch remained dry inside and in perfect working order throughout the entire venture, which lasted for more than 15 hours in freezing cold waters.

Rolex used Mercedes Gleitze’s attempt of the English Channel as the center of an advertising campaign that showcased the superior water-resistance of its Oyster case. At the time, many watch manufacturers made claims about water resistance; however, Gleitze’s swim provided the public with well-documented and irrefutable proof of the Rolex Oyster case’s ability to fully protect against water intrusion.

To this day, Rolex continues to use Gleitze’s name among the marketing materials for its watches, and there are some who believe that the Mercedes-shaped hour hand on Rolex sport models is the company’s subtle way of honoring the British swimmer that holds such an important place in Rolex’s history. However, the problem with this theory is that the Mercedes Gleitze and Mercedes-Benz are two entirely different entities, and Rolex choosing to make its hour hand look like the automotive manufacturer’s logo – simply because they are both named “Mercedes” would be a really round-about way of paying tribute to the famous British swimmer. 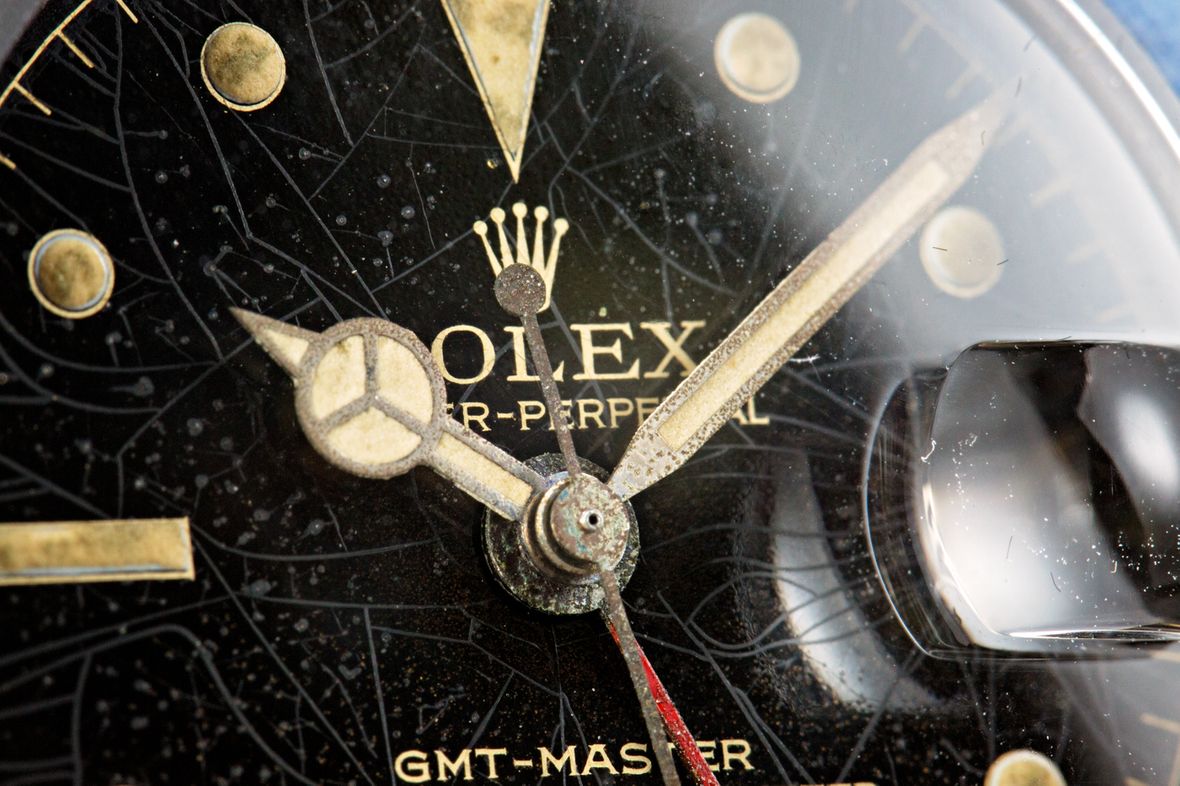 If you thought that it was a bit of a stretch for Rolex’s Mercedes handset to be an allegorical reference to Mercedes Gleitze, then this next myth isn’t likely to be all that much more believable. Regardless, there are some who believe that the Mercedes-style hands were created by Hans Wilsdorf as a subtle tribute to his homeland of Germany.

Hans Wilsdorf was born in Kulmbach, Germany but it was really London, England that Wilsdorf considered to be his home. Wilsdorf originally chose London to be the headquarters of his company, and it was only Britain implementation of a 33% tax that forced him to move Rolex’s headquarters to Geneva, Switzerland. Additionally, Wilsdorf was hardly an example of German national pride during the 1950s, and he openly supported the Allies during World War II – he even personally oversaw efforts to replace the watches of captured prisoners of war after theirs had been confiscated.

Rolex choosing to model its hour hand after the German automotive manufacturer’s logo as a way of paying tribute to the country of Germany makes about as little sense as the theory about Mercedes Gleitze. On top of that, Rolex’s Mercedes hands first appeared around the mid-1950s, and during the decade immediately following the war, it is near-impossible that Hans Wilsdorf would decide to put a tribute to Germany on the dials of his company’s watches. 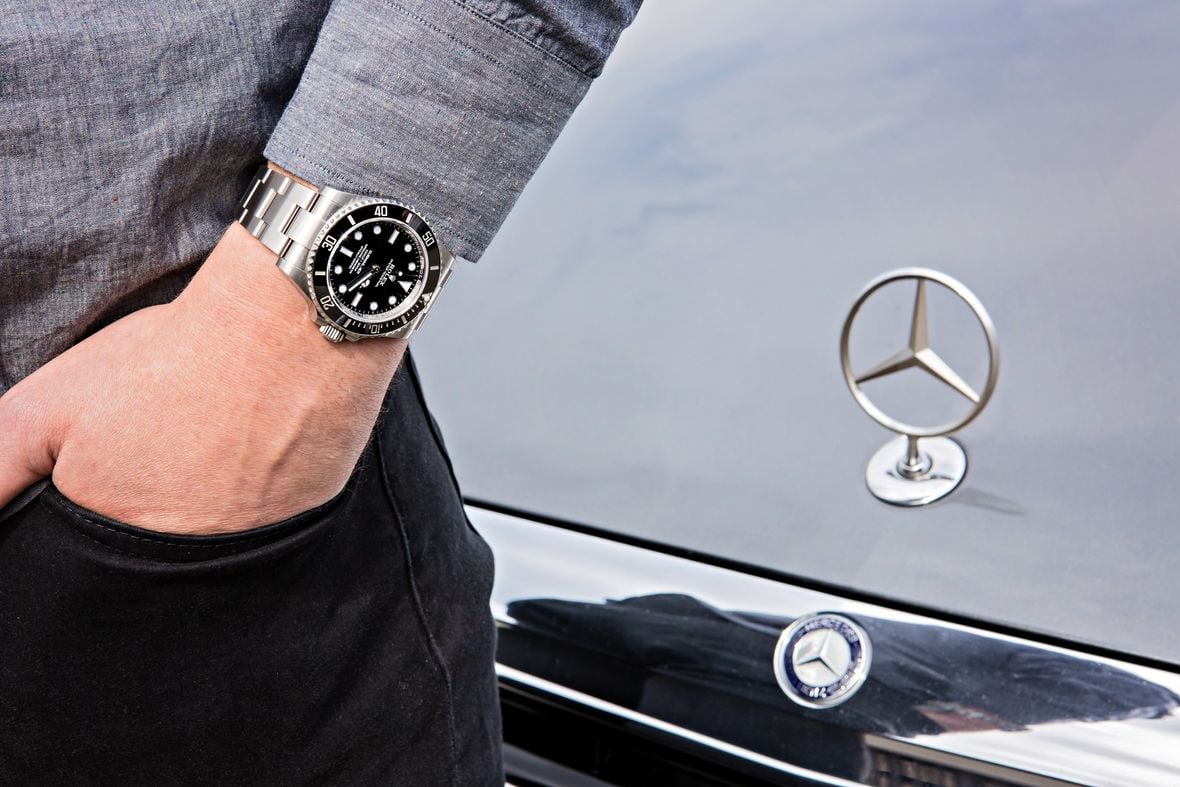 The Truth Behind Rolex Mercedes Hands

Rolex has yet to confirm any of these theories (and likely never will). However, the shape of the hour hand is likely just a functional design element. The construction of a luminous Rolex hand is similar to that of a window, consisting of a metal frame with an open space in the middle. However, rather than being filled with a sheet of glass, the open space on a Rolex hand is occupied by luminous paint. Just like a window (and assuming a fixed thickness), the larger the open space, the more brittle it will be.

The sections that the “Mercedes” star creates in the open space of the hour hand results in a more stable area in which luminescent paint can be applied. Dividing this space into two or four sections (instead of three) would likely also be effective at stabilizing the luminous material, but as the space is divided into more sections, the amount of luminous material that can be applied to the hand decreases. Three sections makes for a nice balance, where the luminous material has enough support without the individual sections becoming too small. Additionally, the three-pointed star within the hour hand helps make it visually distinct from the other hands and hour markers, further aiding legibility in low-light settings.

It is very likely that the “Mercedes” style of hands found on Rolex sports watches is actually the natural evolution of an earlier, but similar style of hands, known as “cathedral” hands. Cathedral hands can be found on a wide variety of timepieces from different manufacturers that significantly pre-date Rolex’s introduction of the Mercedes hour hand. It is quite possible that a cathedral handset was altered for legibility purposes, and in doing so, Rolex found itself with what we have come to know as the “Mercedes” hour hand.

Given that Rolex has not released any official information in regards to the shape of its iconic hour hand or its history of origin, various theories will continue. Regardless, the Mercedes hour hand is a cornerstone feature among Rolex sports watches, and its practical yet visually appealing design has proliferated throughout the entire watch industry. 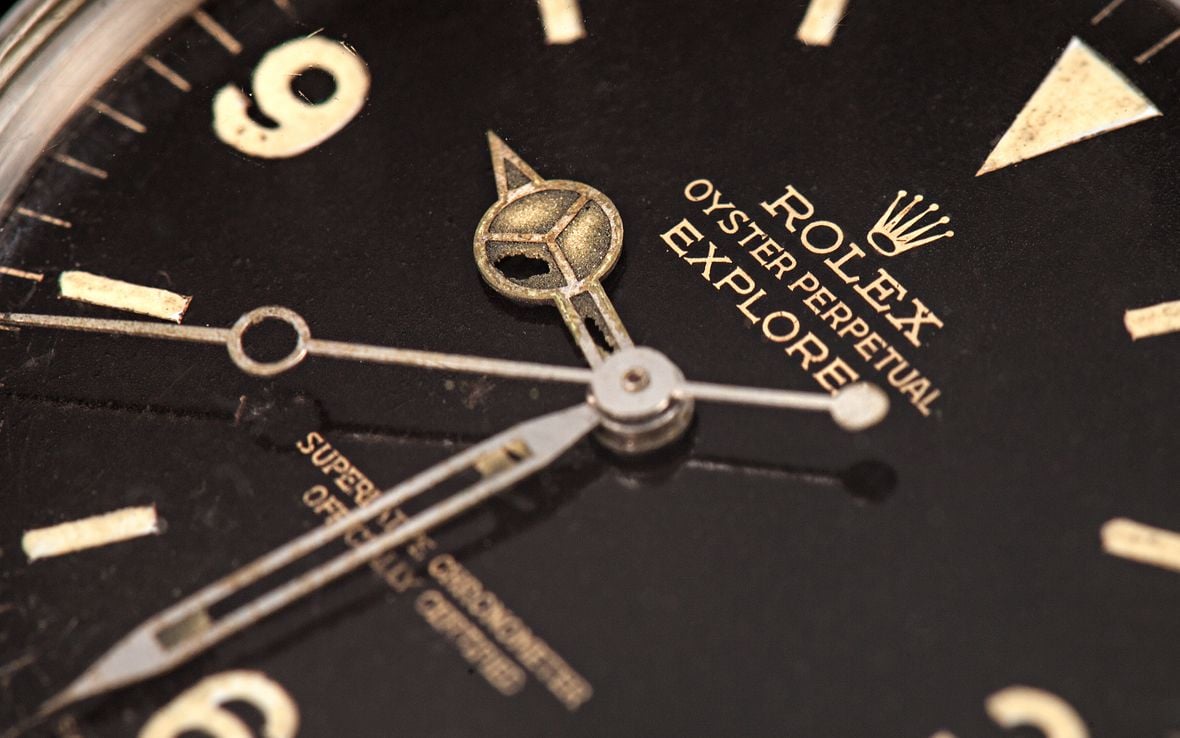