The much loved James Bond film series has historically introduced a whole host of amazingly innovative products to the world. Where the Rolex Company is concerned, its watches have been featured in a total of nine 007 movies including Dr. No, From Russian with Love, Goldfinger, Thunderball, On Her Majesty’s Secret Service, Live and Let Die, The Man with the Golden Gun, and License to Kill.

Within the eight Bond Movies that the James Bond Vintage Rolex Submariner, various characters had the pleasure of wearing a beautiful Rolex. Beginning with Dr. No in 1962, James Bond can be spotted wearing a Rolex non-perpetual with a cold-colored case, light-colored dial, and dark colored strap, it became known as the Sylvia Trench Rolex. In the same movie, he also sported the Rolex Submariner 6538, which became Bond’s signature watch.

In the 1963 hit From Russian with Love, Bond wears what has been coined the “Russian Embassy Rolex”, or a Rolex Submariner with a textured strap. One can’t forget how beautiful the pre-owned Rolex Submariner appeared with his perfectly tailored clothing. Within the same movie, Bond also sported a watch very similar to the Sylvia Trench Rolex.

When Goldfinger took the world by storm in 1964, Bond once again could be seen wearing his Rolex Submariner 6538, which was provided the name “Cigarette Lighter Rolex.” There was one change made to the watch that included the use of an undersized RAF strap. In the 1965 Bond film Thunderball, Bond wore his Rolex Submariner with undersized RAF strap as he attempted to save the world yet once again. 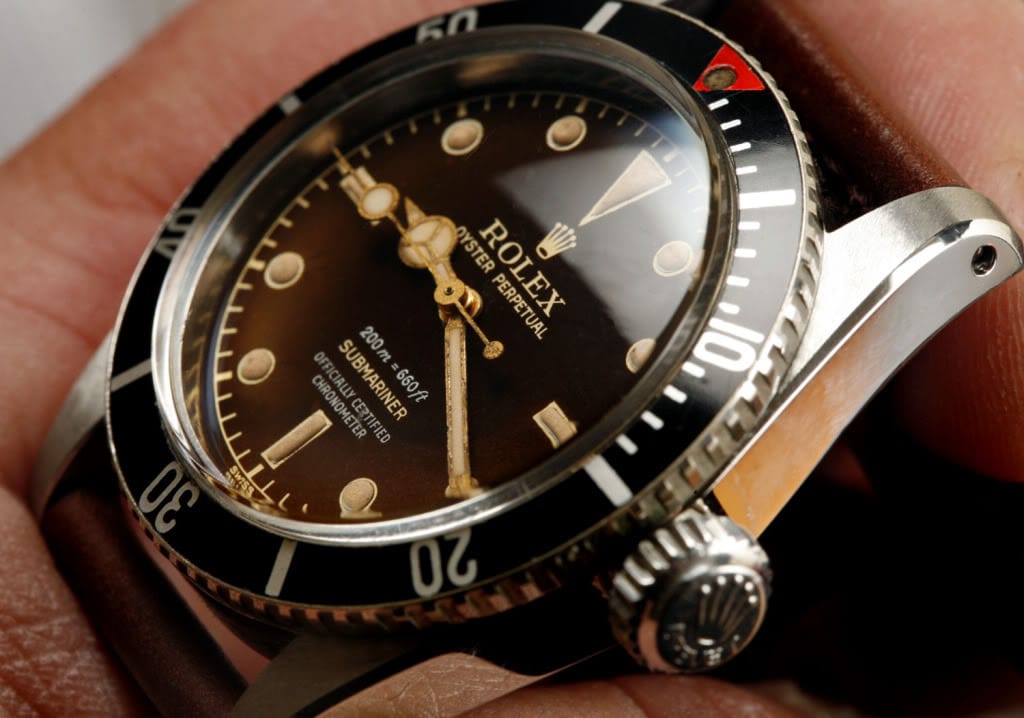 This Rolex 6538 No Date Submariner was worn in James Bond.

In You Only Live Twice, the Sylvia Trench Rolex stole reappeared. This reveals Bond’s commitment to classic elegance, durability, and precision. Two years later in On Her Majesty’s Secret Service Bond reverted back to the Rolex Submariner, but this time introduced the stainless steel bracelet. Additionally, the movie saw him wear the Rolex 6239 with stainless steel bracelet.

By 1973, the world expected to see Bond’s Rolex watch no matter where he went. Thus, when he wore the Rolex Submariner 5513 with a stainless steel bracelet in Live and Let Die, it was no surprise. The watch inspired many men to find a very similar timepiece for themselves.

Bond’s love affair with Rolex was at its end in The Man with the Golden Gun of 1974. Once again he wore the Rolex Submariner with stainless steel bracelet. When 1976 was born, Bond’s Rolex love affair was replaced with a new love for SEIKO. Since then, Rolex hasn’t been a part of a single Bond movie.

Rolex collectors from around the world are constantly seeking out pre-owned Rolex watches from the James Bond era. Finding them can be quite tricky, but it is possible. No matter how old we James Bond fans are we still crave to be like Bond as we adventure our way through life.