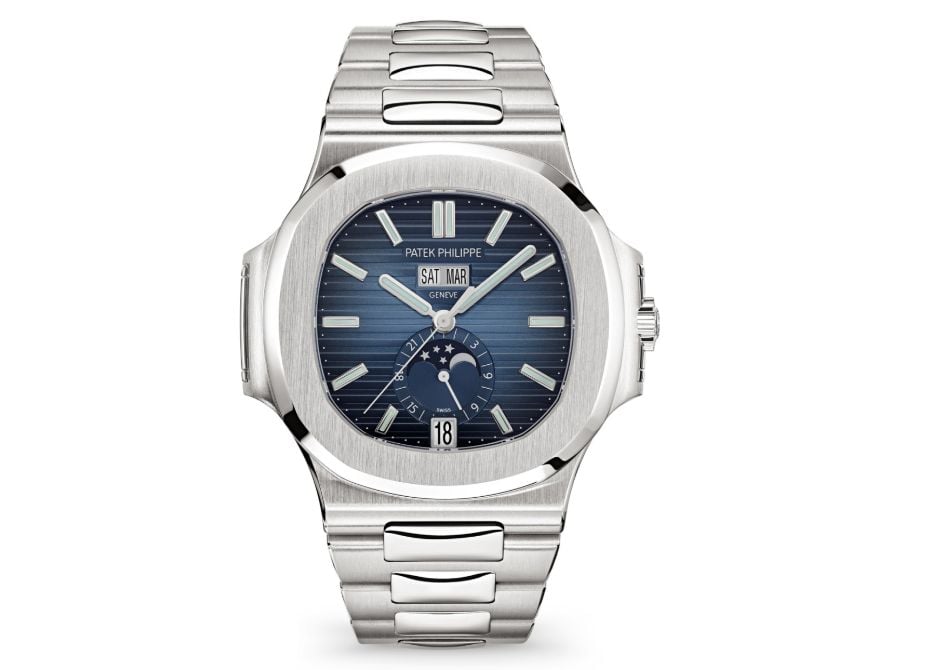 A standard Nautilus ref 5726 before any customization work gets started. (Image: Patek Philippe).

While most Nautilus wearers aren’t the type to get their watches blacked out, Abloh is nothing if not a provocateur who goes against the grain. Doing a little digging GQ identified the timepiece as the work of watch customizers Mad Paris, who have previously blacked out and bejeweled various Royal Oak and Rolex models, and who bring a high-end streetwear vibe to the luxury watch game.

While Mad Paris would neither confirm nor deny that they created Abloh’s watch, due to the facts provided about how the timepiece was made, GQ concludes that they must have been the ones responsible. To achieve its blacked-out appearance, the naughty Nautilus is coated in DLC or diamond-like carbon, a step up from a PVD coating.

Creating a Blacked-Out Nautilus for Abloh

Lheureux says that the process of creating the watch, which began its life as a stock Nautilus 5726/1A with annual calendar and moonphase complication (retail price: $45,930), took two full months. As the model is much in demand, simply acquiring a donor watch took some time. And as a first step the entire watch had to be completely disassembled.

Every piece was then washed, polished, brushed, or sandblasted before the DLC coating was applied, GQ notes. To do this, they go into a specialized vacuum chamber;  after preheating, a gas is released into the chamber that completely covers the pieces of the watch, in a process known as “ionic pulverization.” The Nautilus was then painstakingly reassembled.

Finally, Mad Paris put a tiny pair of quotation marks around the Patek logo on the dial. This is a reference to Abloh’s signature designs for Off-White, which often contain ironic quotation marks referencing luxury goods and apparel pieces as a commodity. It should be noted that doing this to your own Nautilus could in fact have a negative impact on its value. But we have to admit it’s pretty cool.