Women’s watches are entering an exciting time and SIHH 2019 highlighted that. As the industry slowly but surely leans towards creating beautiful timepieces that have both feminine style and mechanical ingenuity, we no longer are forced to choose between quartz mechanisms with diamond-encrusted bling and “boyfriend” watches. Plus, with the growing unisex trend, there seems to be more choice than ever before.

Now, all this isn’t to say that us ladies don’t enjoy a little sparkle too. So here, we’ve rounded up what we think are the best and widest-breadth of mechanical women’s watches that this year’s show had to offer. 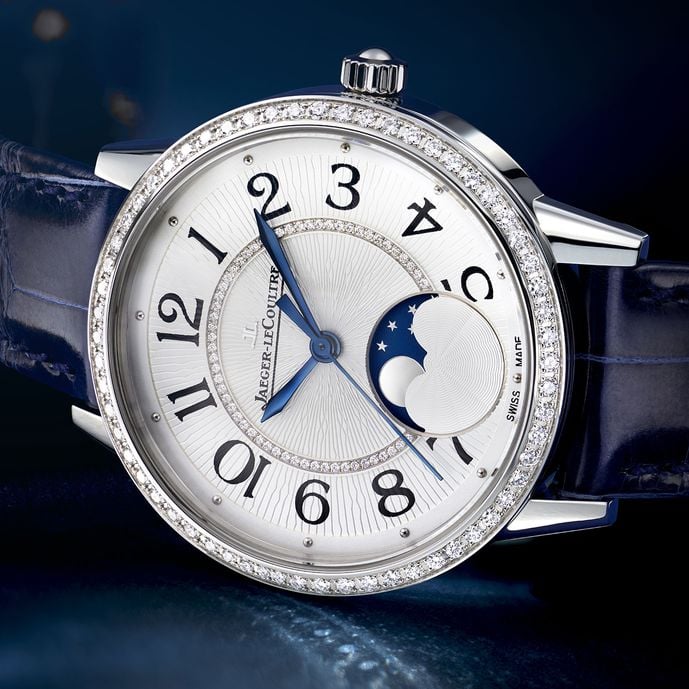 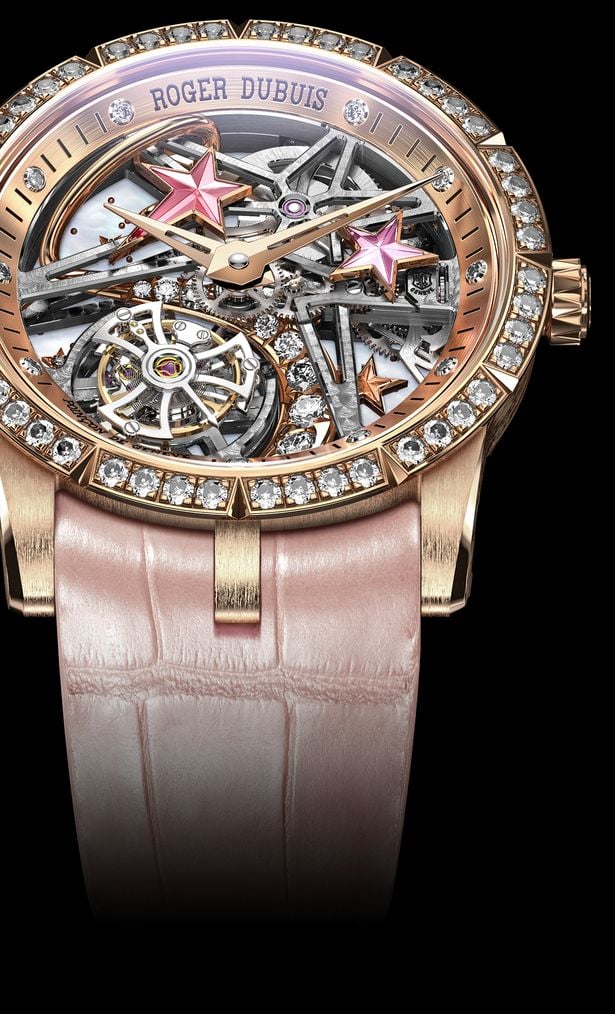 Haute horlogerie, Roger Dubuis spent two years developing their Shooting Star Flying Tourbillon with its skeletonized, hand-wound mechanical calibre RD510SQ movement, which boasts a flying tourbillon complication and a 60-hour power reserve. But, the most impressive part of this watch is that it’s all fit within a teeny 36mm 18k pink gold case. Yes, you read that right.

It’s kind of the ultimate example of form meeting (exceptional) function in women’s watches – featuring that signature calibre alongside 10 round-cut diamond hour markers, an 18K pink gold shooting star decorated with diamonds and enamel, and 18k pink gold hands. The ultra-feminine look may not be for everyone, but with just 26 limited-edition pieces being released, we think they’ll find their way to a adoring wrist soon. 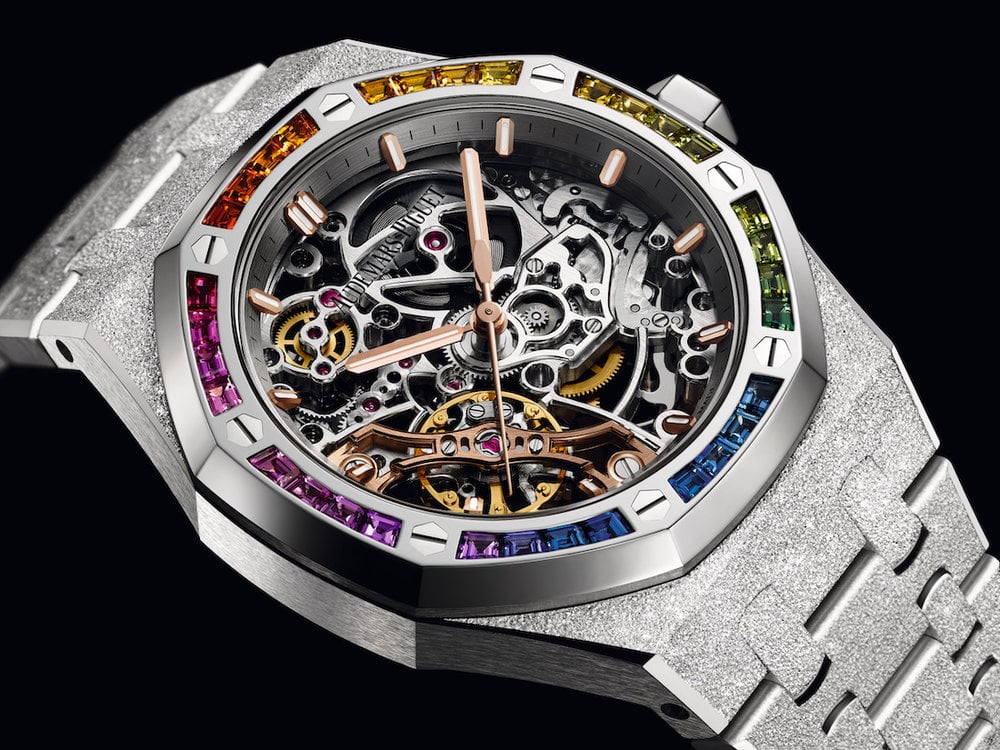 With a downgrade in size and an upgrade in stylish details, the imposing Royal Oak has been retrofitted for ladies who want to make a statement. The watch features an 18k white gold case and bracelet which have been given an icy ‘frosted’ finish. Whatsmore, the bezel atop the 37mm case has been outfitted with 32, individually cut, baguette ‘rainbow-coloured’ sapphires (clocking in at 2.24 carats) set in between the brand’s signature case-screws.

When you finally get past these striking looks, you’ll also notice the skeletonized, rhodium-toned face, which proudly displays the gold double balance wheel mechanism of the in-house calibre 3132. Turn it over, and you have just as impressive of a view. Plus, it holds an impressive 45-hour power reserve. 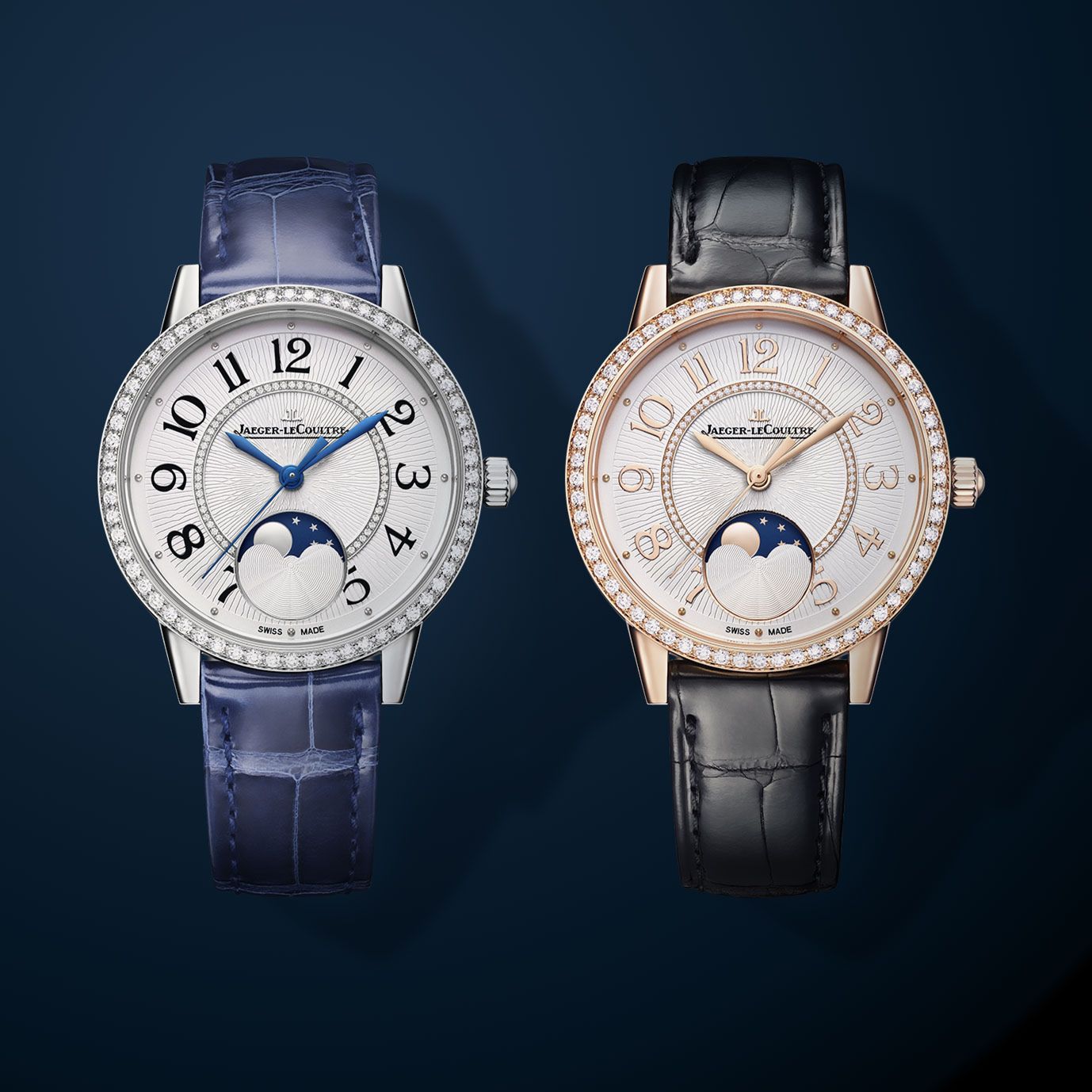 We’re over the moon for the brand new moonphase given to the beloved Jaeger-LeCoultre Rendez-Vous. Previous models featured just a smaller eye-shape moonphase, but the new model is presented with a larger, more traditional lacquered moon phase positioned down at six o’clock. Available in rose gold or steel, both versions have bezels that are outlined with 60-diamonds, with another forty-seven smaller diamonds set into the silvered guilloché dial.

Outfitted with some bling and clocking in at a tiny 34mm, this watch has a feminine touch while still feeling inherently handsome. Perhaps it’s the moonphase. It could also be the clear sapphire caseback that puts the automatic caliber 925A on display as it ticks away the hours, minutes, seconds and coveted moonphase. 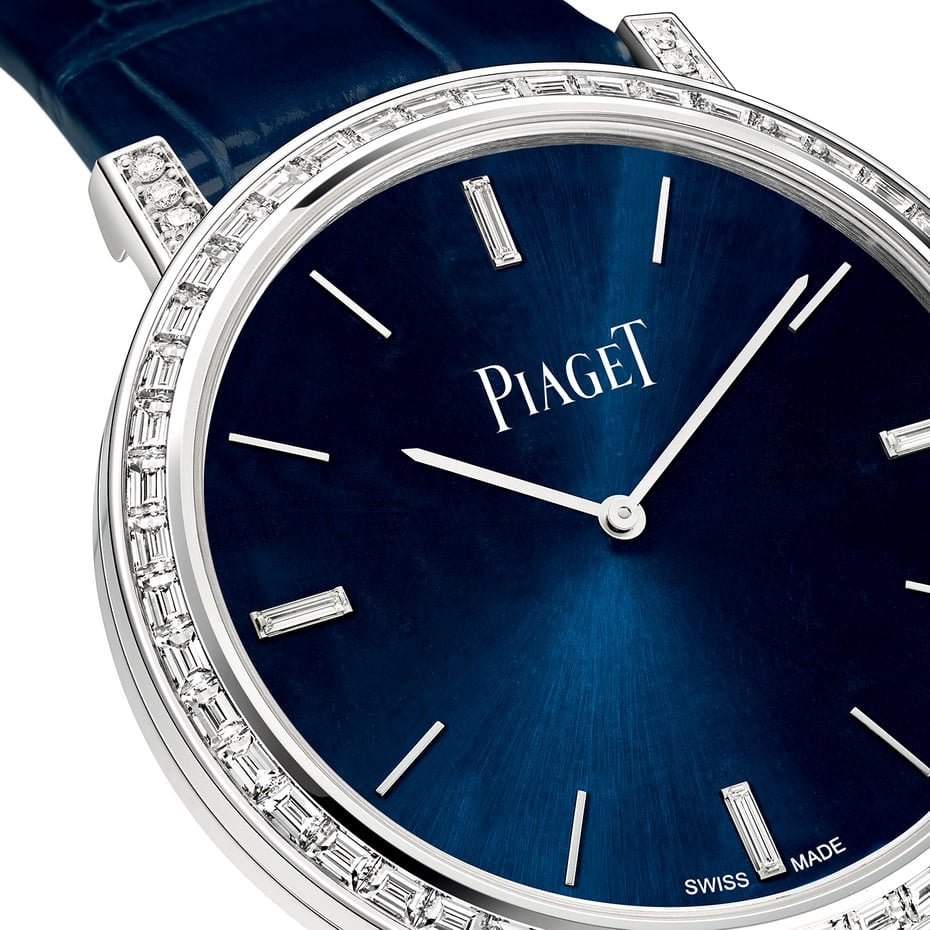 The 36mm Piaget Altiplano High Jewelry features baguette-cut diamonds on both the bezel and hour markers of the watch (Image: Piaget).

While Piaget is branding this 36-mm stunner as a women’s watch, there was a lot of talk at SIHH 2019 that this timepiece could fall under the budding unisex category. For one, it was totally on-trend with the baguette diamonds which we saw trickling into the fair this year (meaning it’ll probably be a mainstream trend in the next few). Piaget worked the diamonds not only into the bezel, but also into the hour markers for three, six, nine, and twelve locations too.

The dial has also been given this incredible blue finish – what they call something ‘between cobalt and midnight blue,’ with a stunning sun-ray finish that illuminates in the light. The color and edgy diamonds give it a wonderfully classic, unisex feel while still oozing pure elegance. For this reason, we think the anniversary edition with a 430P extra-flat with manual winding calibre, is a highlight of SIHH 2019 in itself – let alone within the category of women’s watches. 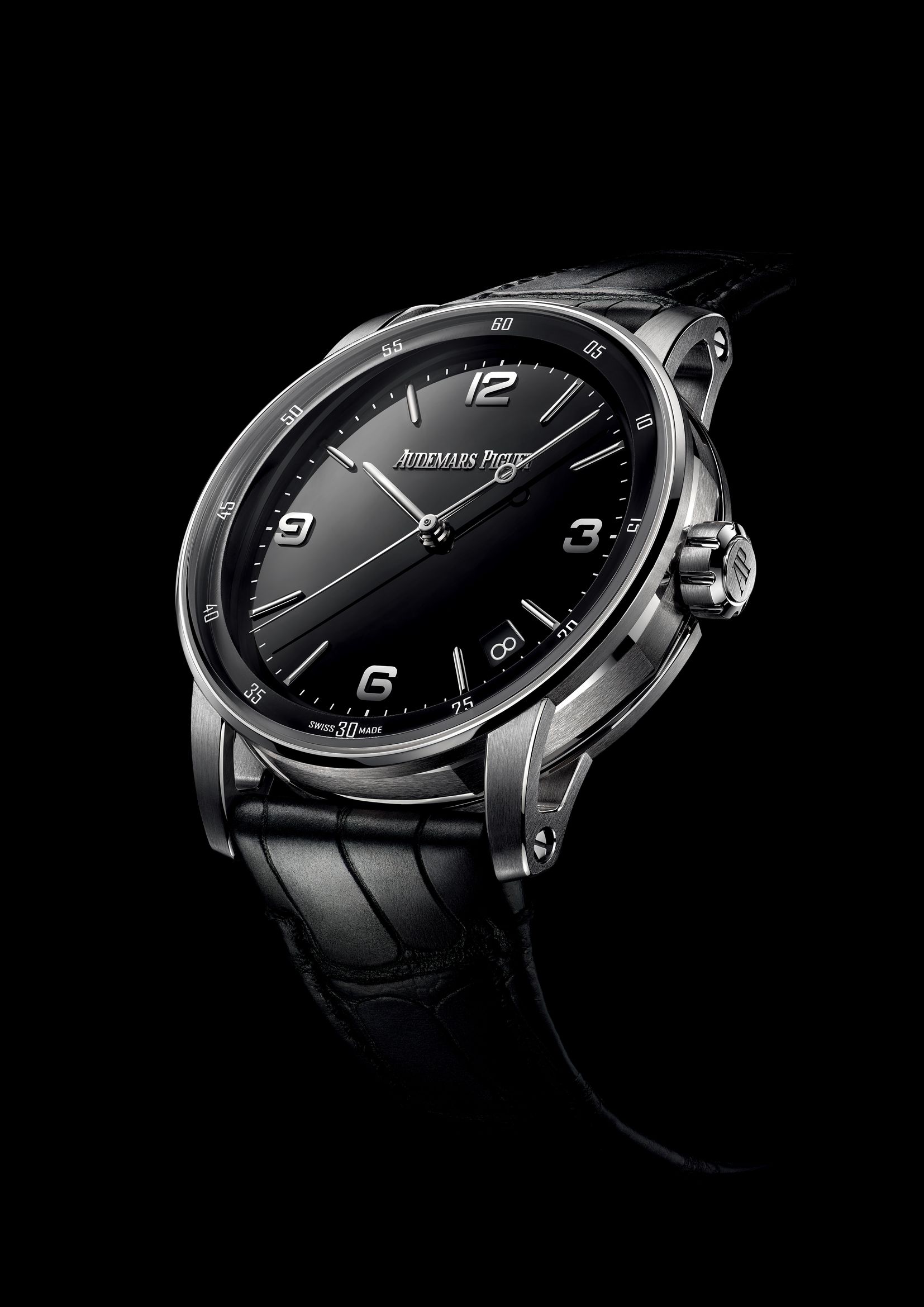 With a case diameter of 41mm, the new Audemars Piguet CODE 11.59 Selfwinding is perfectly suited to both male and female wrists (Image: Audemars Piguet).

You did a double take, didn’t you? One of the big surprises at SIHH 2019 was the release of Audemars Piguet’s newest line, CODE 11.59 – which is clearly a big departure from what the brand is known (and loved) for. Some hated the new round(ish), 41mm, 18k gold cases. We loved it. The horlogerie is also marketing this entirely new line of watches towards both male and female clientele. So, of course, it’s making it on this list.

The name – CODE 11.59 – refers to the last minute of the day, evoking wearers to think of this watch as a new ‘dawn’ of watchmaking for the brand. The case isn’t all that marks a new era. The new calibre 4302 aims to be extremely accurate and reliable, and features a 22-carat gold oscillating weight. Plus, there’s other killer new aesthetics like the leather band, shiny black face, Arabic numerals, double-curved sapphire crystal that plays with light and your eyes to give the watch a ‘unique optic experience.’

The Cartier Libre Diagonale is stunning; however it uses a quartz movement so doesn’t qualify for our list of the Best Mechanical Women’s Watches at SIHH 2019 (Image: Cartier).