Just before the opening of Baselworld, Patek Philippe has announced their new watches for 2019. Along with a number of other new releases (including a new stainless steel Nautilus), there will be a new addition to the Aquanaut family – the reference 5168G – which features a white gold case, a khaki green dial, and a matching green rubber strap. Given the high demand for the Aquanaut in recent years, and given the long waitlists that exist at authorized Patek Philippe retailers, this release (although not entirely groundbreaking) will almost certainly be one of the fan-favorites from the show. Let’s take a closer look at the green Aquanaut 5168G. 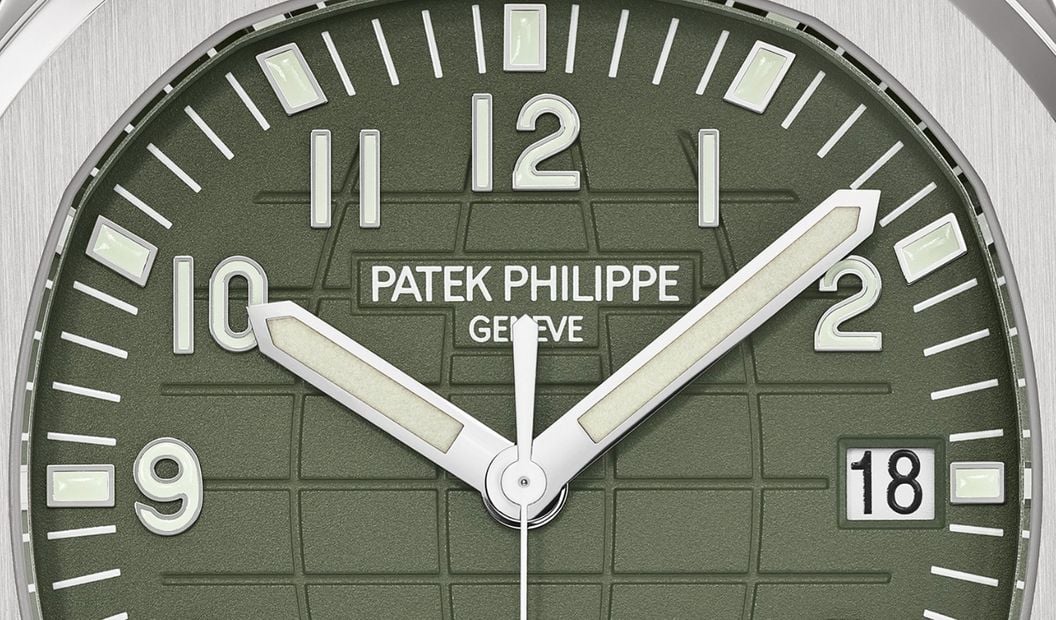 Not the Standard Aquanaut

The new khaki green Patek Philippe Aquanaut 5168G is not based on the standard 40mm version of the watch (the reference 5167) as one might expect. Instead, the ref. 5168 measures 42.2mm in diameter, and uses a solid white gold case (as indicated by the ‘G’ at the end of its reference number). This new khaki green Aquanaut is the second version of the white gold reference 5168G. The original iteration was released in 2017 to celebrate the Aquanaut’s 20th anniversary, and this is more-or-less the same exact watch, except instead of a blue dial and matching blue “tropical” rubber strap, this new release features army green components. 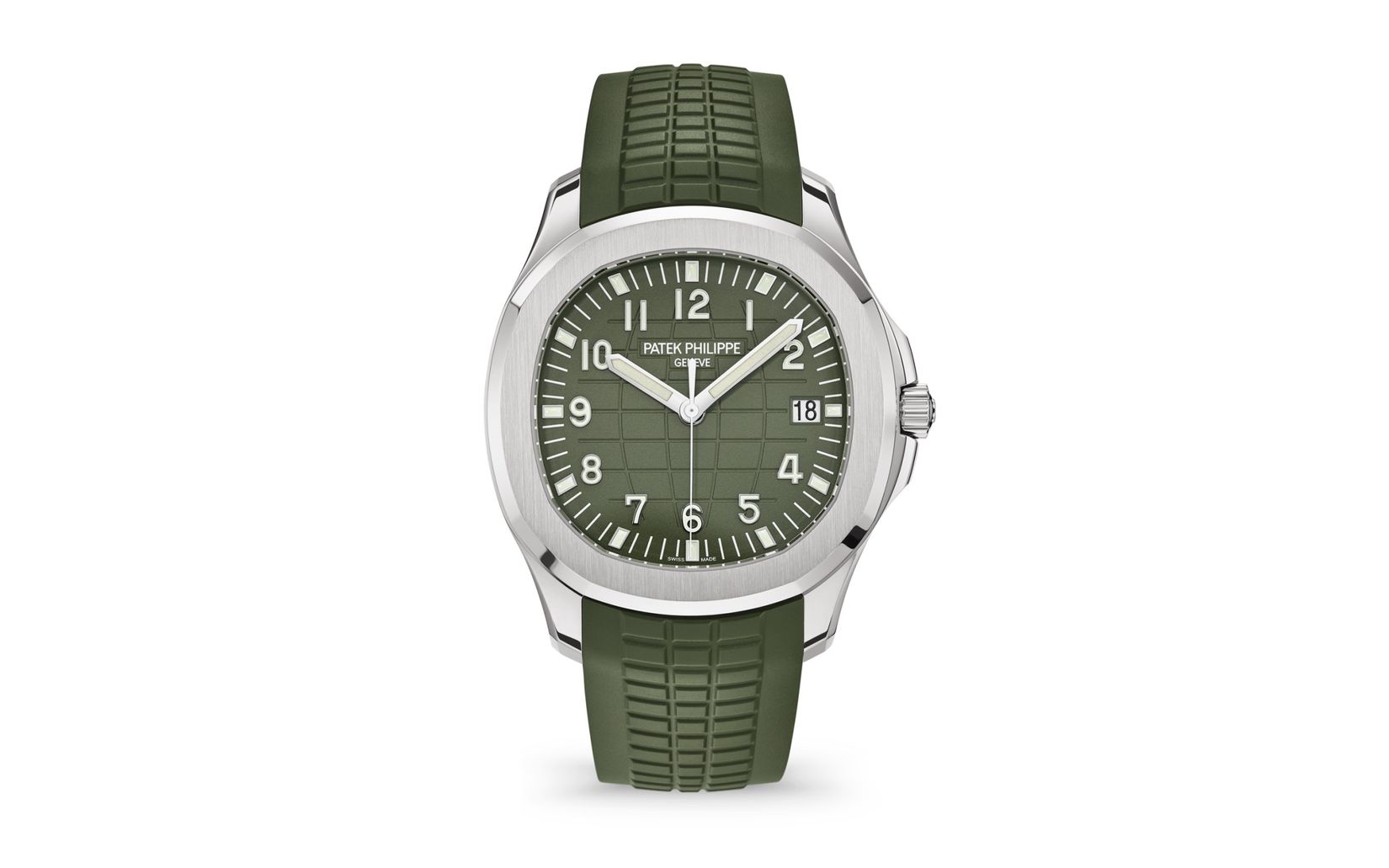 Essentially, this is just a color variation of a watch that already existed within the Patek Philippe lineup. What was previously blue is now army/olive green; however for those who closely follow and collect Patek Philippe watches, the fact that this is a green Aquanaut makes this release newsworthy. 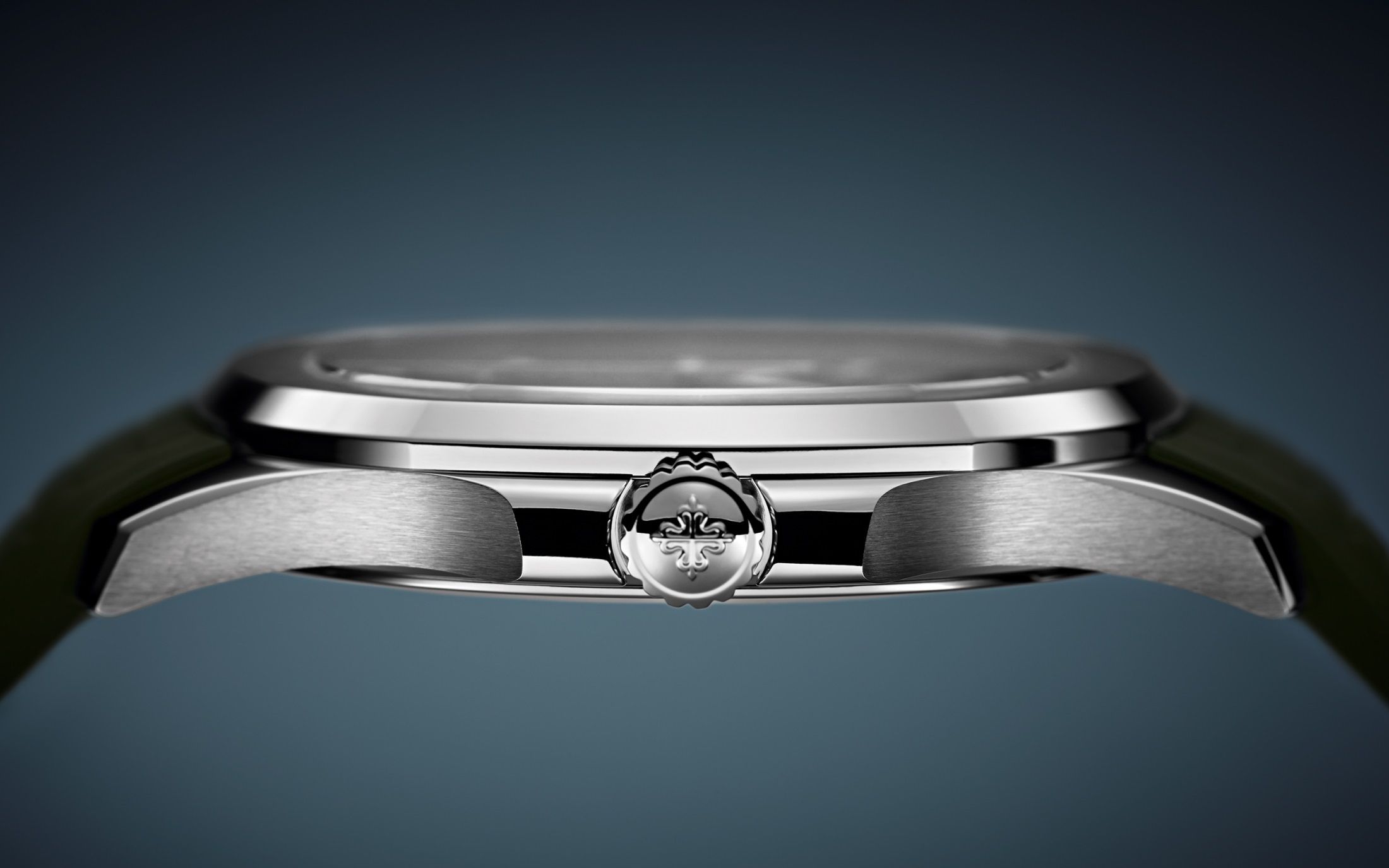 It is estimated that there are less than 10 example of the original green Aquanaut (Image: Patek Philippe).

The Return of the Green Aquanaut

The original green Aquanaut was produced around 2010/2011 as special order pieces for preferred clients of the brand. Rather than having a 42.2mm white gold case like Patek’s latest release, the original green Aquanaut was the reference 5167A, and consequently had a 40mm case craft from stainless steel. It is believed that less than 10 examples were originally produced (although some say that the real number is actually less than half of that), and they rarely ever change hands or surface at auction. Whenever they do, collectors take note, and they command serious money.

Although production of the first green Aquanaut was extremely limited, for a number of years, replacement khaki green rubber straps were available through Patek Philippe retailers for anyone who owned either a ref. 5164 or ref. 5167. Many collectors who had the standard black-dial version of the Aquanaut opted to purchase a green rubber strap for their watch, so it is not entirely uncommon to see Aquanaut references with black dials and green straps floating around. However since then, rules have changed, supplies have tightened, and now Patek Philippe will only sell a khaki green rubber strap to customers who actually own a khaki green version of the Aquanaut. 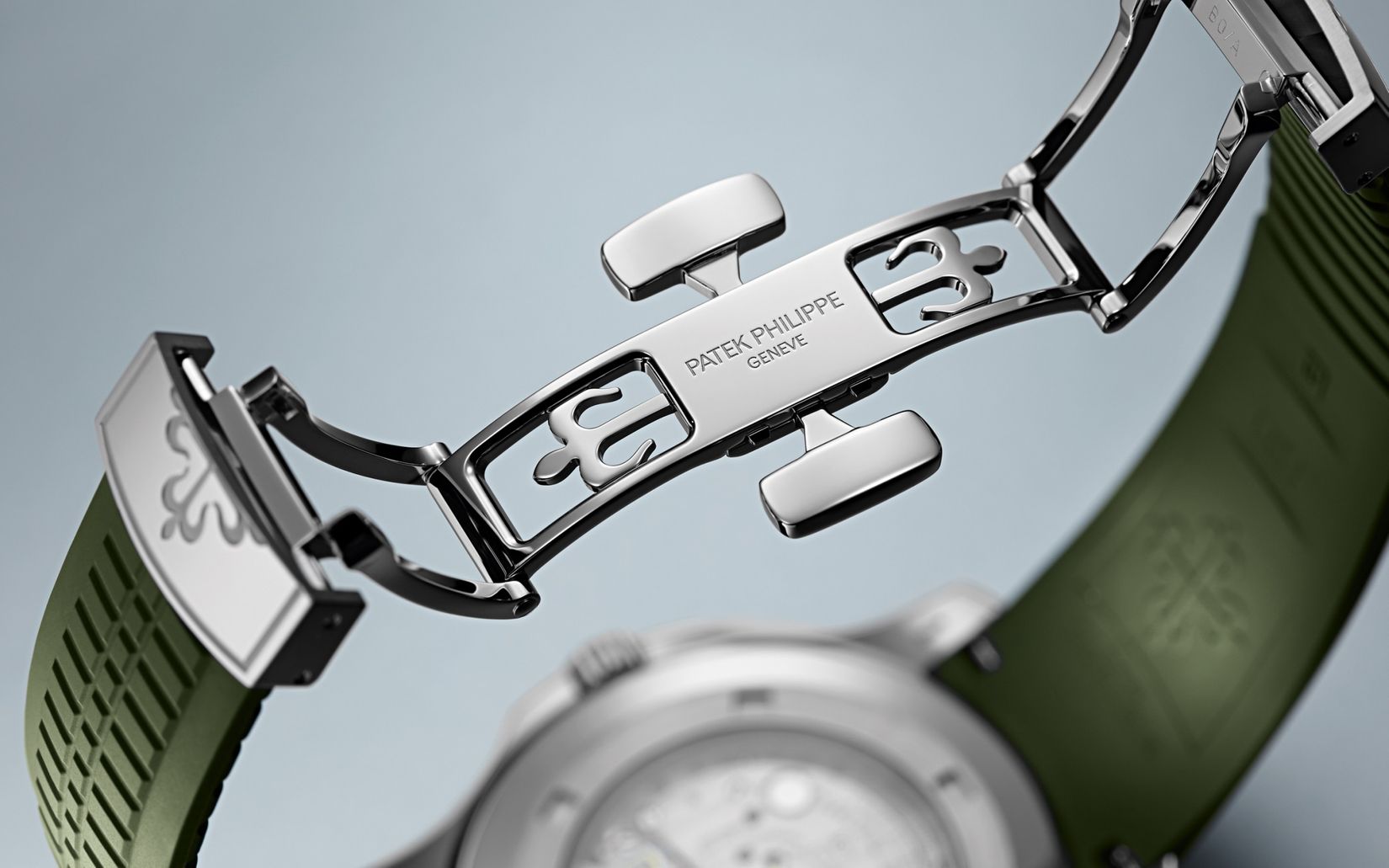 With the release of the new Aquanaut 5168G, buyers will have the opportunity to purchase a green Patek Philippe Aquanaut without having to jump through the hoops of trying to track down one of a small handful of original (and highly expensive/elusive) examples. The new ref. 5168G green Aquanaut will be a non-limited edition and priced at $35,000, which makes it (by far) the least expensive way of getting your hands on a Patek Philippe Aquanaut with a green dial. 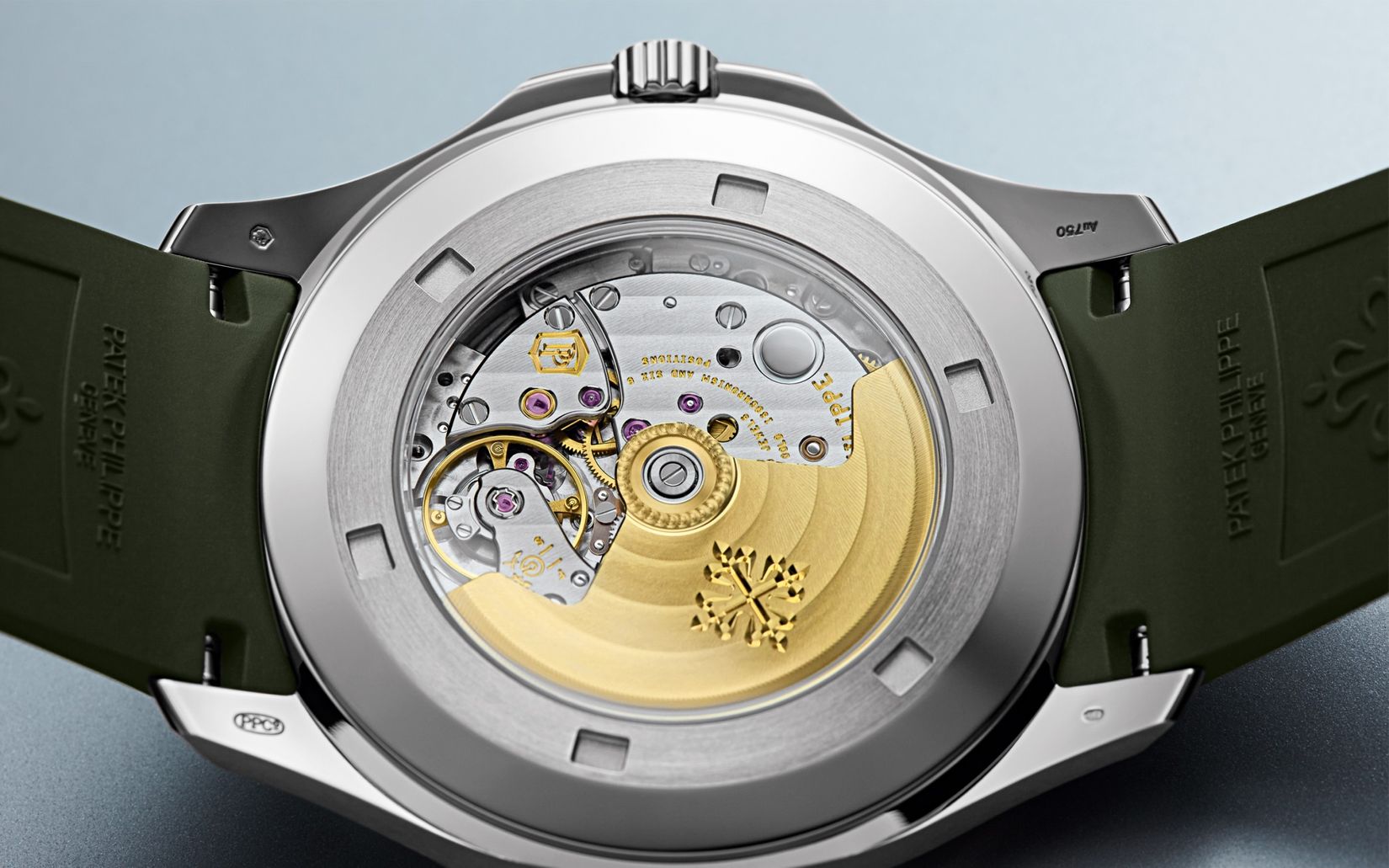 The cal. 324 S C movement inside the Aquanaut 5168G is fully visible through a sapphire caseback (Image: Patek Philippe).