Formula 1 prodigy Max Verstappen has teamed up with racing favorite TAG Heuer for the third year in a row to bring us an all-new limited edition timepiece.

Following on from successful collaborations in 2016 and 2017, the current model has an altogether more solid, more grown-up appeal than previous models by TAG Heuer. 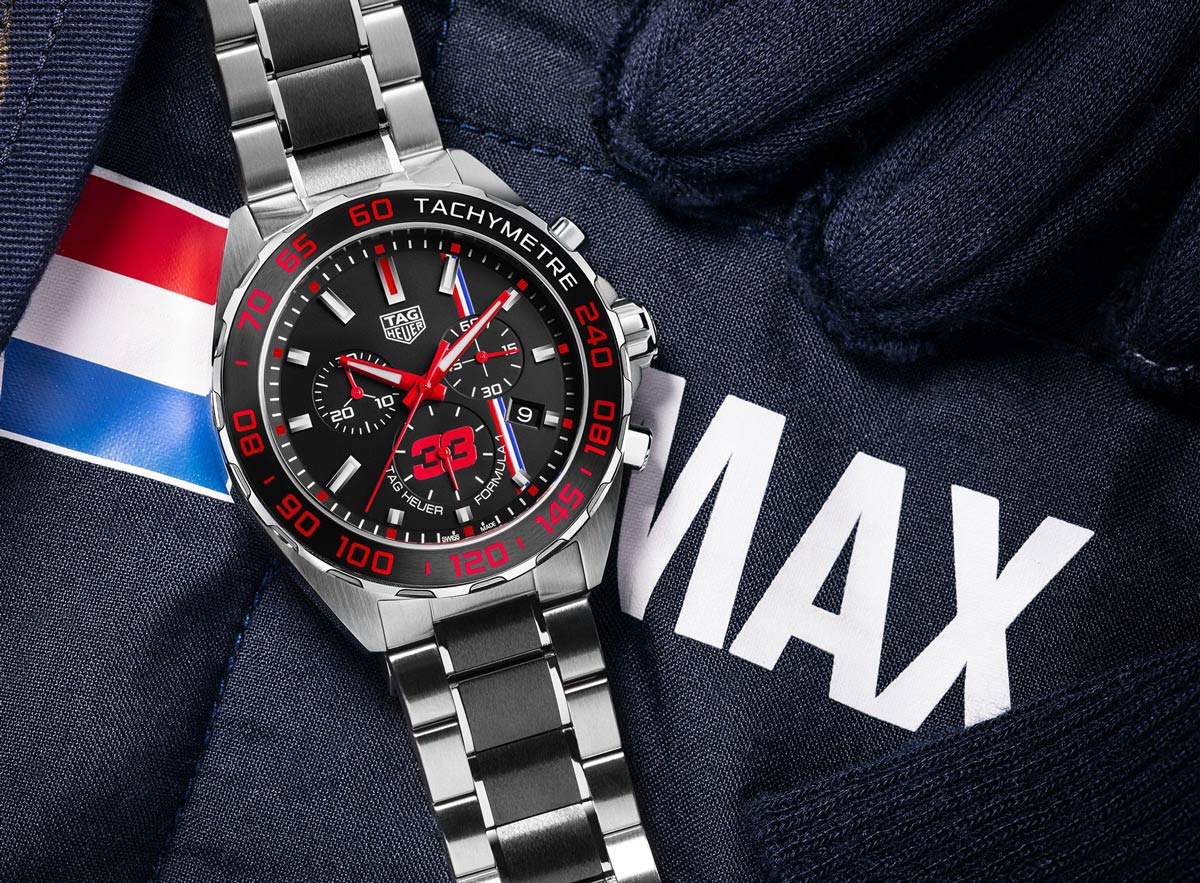 The pair first formed an alliance when Verstappen became the youngest driver ever to win a Grand Prix, emerging victorious in Spain in 2016, aged just 18 years and 227 days old. The watch created to celebrate that milestone achievement was steeped in patriotic pride, with a dial and rubber strap splashed in bright orange as a tribute to the Netherlands, the racer’s home country.

The following year, the orange detailing had given way to red, again on a rubber strap, and contained a few nods to Verstappen’s Aston Martin Red Bull Racing Team. A bi-color outer minute track was included, with the red section filled in to ‘33’, his official car number.

For 2018’s offering, the palette has taken a slightly less vivid direction, while still remaining a striking piece. A black opaline dial replaces the blue face of the last two models, while the handset and bezel markings have stayed an intense red. But the introduction of a steel bracelet, with beautiful black ceramic center links, switches up the whole look entirely. Still obviously a sports watch, the new aesthetic grants a touch more versatility.

The Formula 1 driver reportedly had more of a hand in the design of this latest watch, and he was apparently keen to reiterate his Dutch loyalty. A thin stripe in the national colors running down the right side of the dial, from the 1 o’clock to the 5 o’clock, is a pleasingly subtle touch. 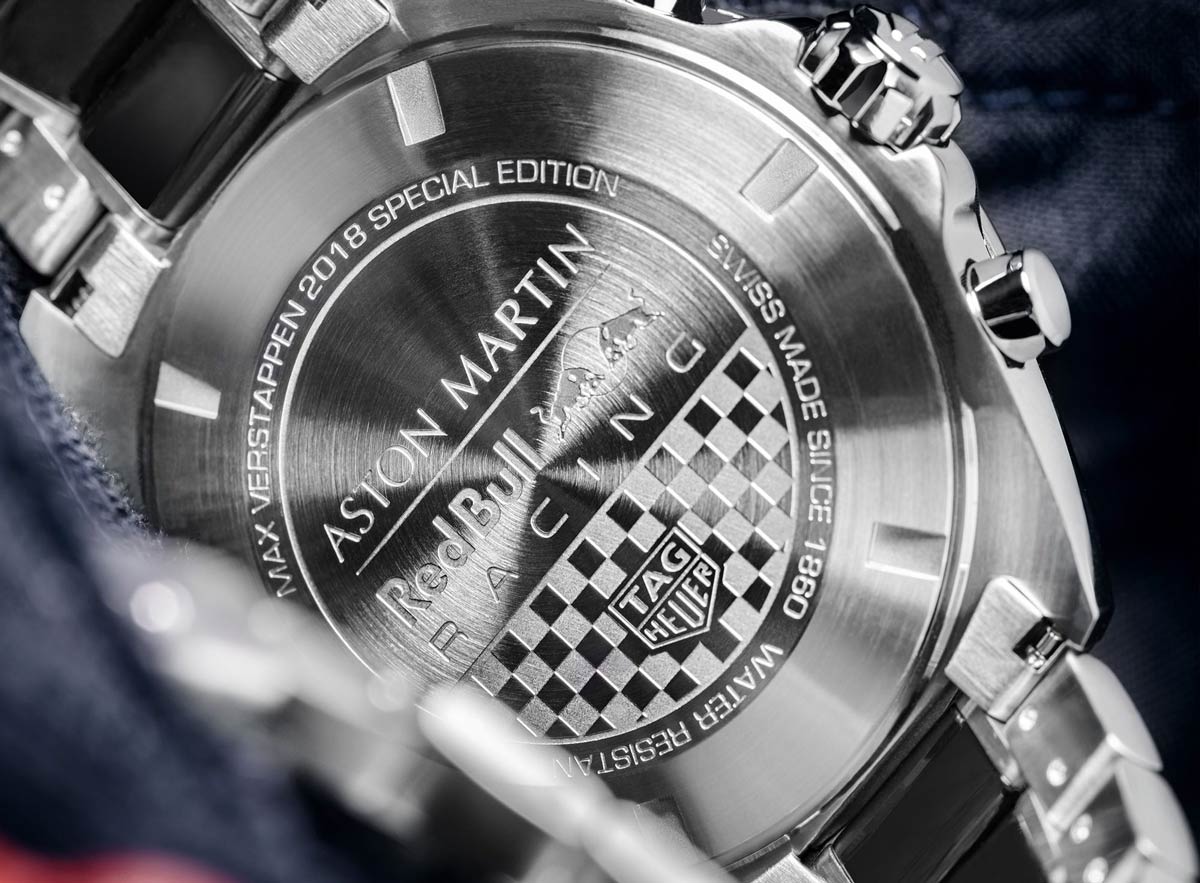 What are your thoughts on the Max Verstappen Special Edition watch? Let us know in the comments below. (Credit: TAG Heuer)

The tri-compax chronograph counters, measuring minutes, seconds and 1/10th seconds, are as standard, with the largest of the three at the six o’clock again emblazoned with Verstappen’s race number.

The bezel, like the center links, is forged from ceramic, in black to match the dial. Unlike many other chronograph tachymeter surrounds such as on Rolex’s Daytona or indeed TAG’s own Carrera, it features a toothed edge rather than a smooth one. It is something of a strange addition, as it is usually included to make a bezel easier to rotate which, of course, tachymeters don’t. Regardless, it makes for a nice styling flourish. It is also engraved to 240 units, which again seems a little arbitrary, but is in no way a distraction. Sitting on top of the 43mm steel case, it lends the whole affair a robust sturdiness.

Inside is a quartz chronograph movement, which may cause horology purists to turn up their nose a bit but is actually a good choice considering the market. This is a watch aimed at a younger audience, those who idolize a race ace barely out of his teens, and who care less about the world of mechanical movements.

TAG Heuer has led the way with chronograph technology from generations ago, serving as official timekeepers for legendary names such as Ferrari, Lotus and Maserati in the past, as well as being the sanctioned outfit for Formula 1 itself in the 1970s. So if a brand with that sort of heritage want to outfit one of their watches with a quartz caliber, they have probably earned the right.

Other details on the watch are carried over from previous editions. The stick hands are lacquered and the baton style applied indexes are gold plated, all filled with plenty of Superluminova. The screw-down crown is flanked by two round and polished chronograph pushers at the two and four o’clock and they, along with the screw-down case back, ensure a waterproof rating of 200m.

The case back is actually one of the busiest parts of the entire design, etched with both TAG Heuer’s and the Red Bull Racing Formula 1 Team’s logos. Just about the only thing not included is the watch’s individual issue number; 2018’s Max Verstappen Special Edition is limited to a run of 1,300 pieces.

The good news is, the quartz movement has kept the price down to a very reasonable $2,250 each. The bad news; they have all sold out already.

Keep your eyes peeled on the pre-owned market for your chance of snapping up one of these enticing models from one of the biggest names in motor sport.