Rolex Bezels: How to use the Cosmograph Daytona Tachymeter Bezel

The History of the Daytona Tachymeter Bezel

Since its release, the Daytona has seen many bezel variations, including stainless steel and plastic in early references and, more recently, aluminum, ceramic, and white gold.  The Tachymeter bezel’s primary function is to measure average speeds per hour while traveling, a feature that was initially developed by Rolex in a bid to become the official watch of NASA, hence its original name “Cosmograph”.  Instead, Rolex’s iconic chronograph found its home among the world of professional driving, with the Tachymeter bezel being used primarily to measure driving speeds. Early references allowed the wearer to measure driving speeds of up to 200 kilometers per hour, while later references were upgraded with a bezel that featured 400 graduations per hour.

Through the years, Rolex has continued to improve upon the movement that powers the Daytona, evolving from such movements as the Zenith “El Primero” calibre 4030 movement to the Rolex calibre 4130 movement, which is made entirely in-house.  The movement plays a crucial part in the accuracy of the bezel calculations. 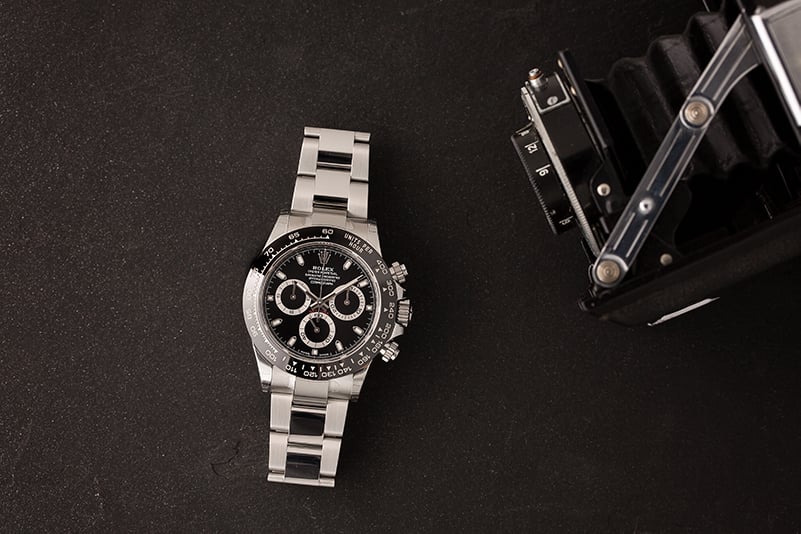 As previously mentioned, the Tachymeter bezel is marketed as a tool for measuring driving speeds.  To use the bezel, you will also need to engage the side pushers to access the chronograph functions.

You don’t have to be a NASCAR driver to take advantage of the Tachymeter bezel.  It can also be used to measure the approximate time it takes to do anything over the course of an hour at an average rate.