The Evolution of Rolex Luminous

Some of the very first applications of luminous paint (lume) can be found on military pocket watches from the early 1900’s. Initially, luminescence was achieved by using a radioactive material called radium, which was first discovered by Marie Slodowska-Curie and her husband, Pierre Curie in 1898. Radium was combined with zinc sulfide, which allowed for a brighter glow than pure radium alone. You can see this on a number of vintage Rolex watches examples. 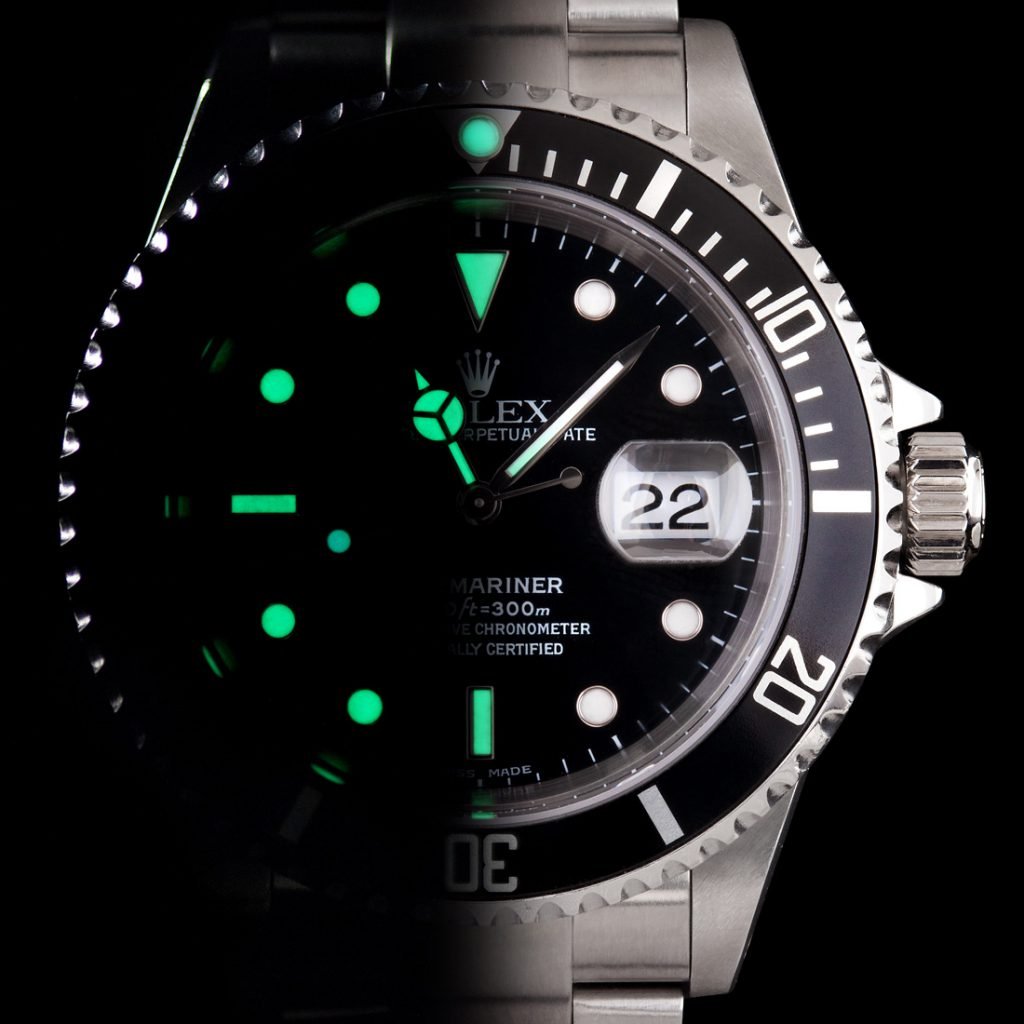 Half Lume on a Rolex Watch with a green glow.

The lume used on vintage Rolex watches was radium-based, and radium remained the standard for all Rolex lume until 1963, when growing health concerns forced a shift away from it. During the early 1900’s, the effects of radiation exposure were not well understood, and radium was frequently marketed as a magical “cure-all” intended for human ingestion. 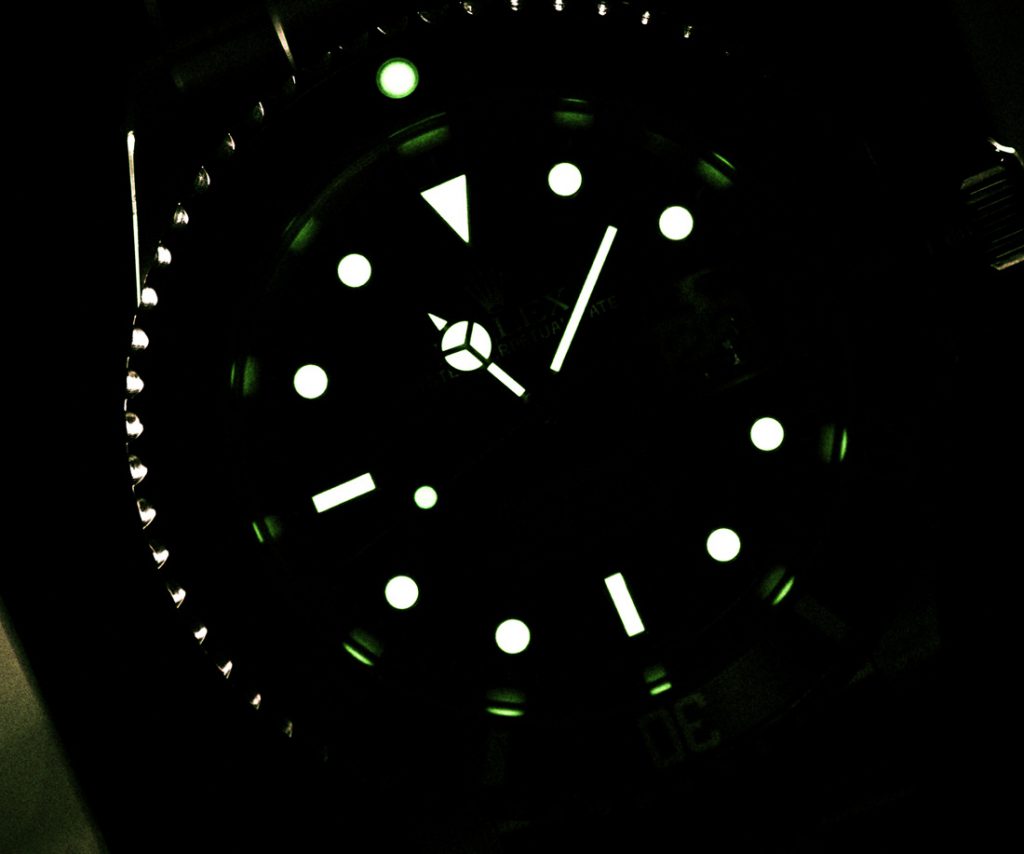 There is a reason why some Rolex watches will glow green and others glow blue.

Even after radium exposure was proven to be harmful in the late 1920’s, it was still used (in moderation) for several more decades. Due to the dangers, factories implemented safety protocols, and radium continued to be used on watch dials until the early 1960’s. 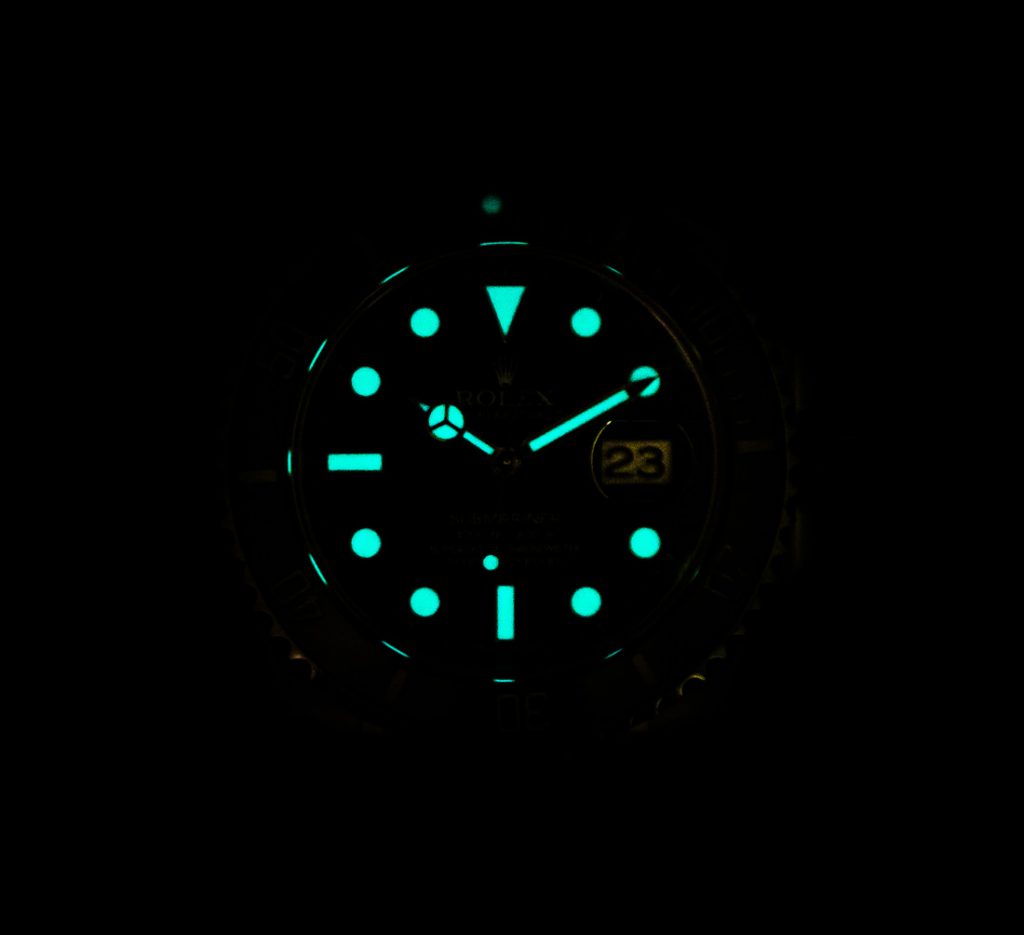 Here is an example of a Rolex watch with a blue lume.

Although there were safety measures in place, growing health concerns pushed Rolex to abandon radium altogether in 1963. With radium ruled unsafe, tritium became the luminous material of choice for Rolex. Just like radium, tritium was also radioactive; however, it came with a much lower level of radiation and a much shorter half-life. 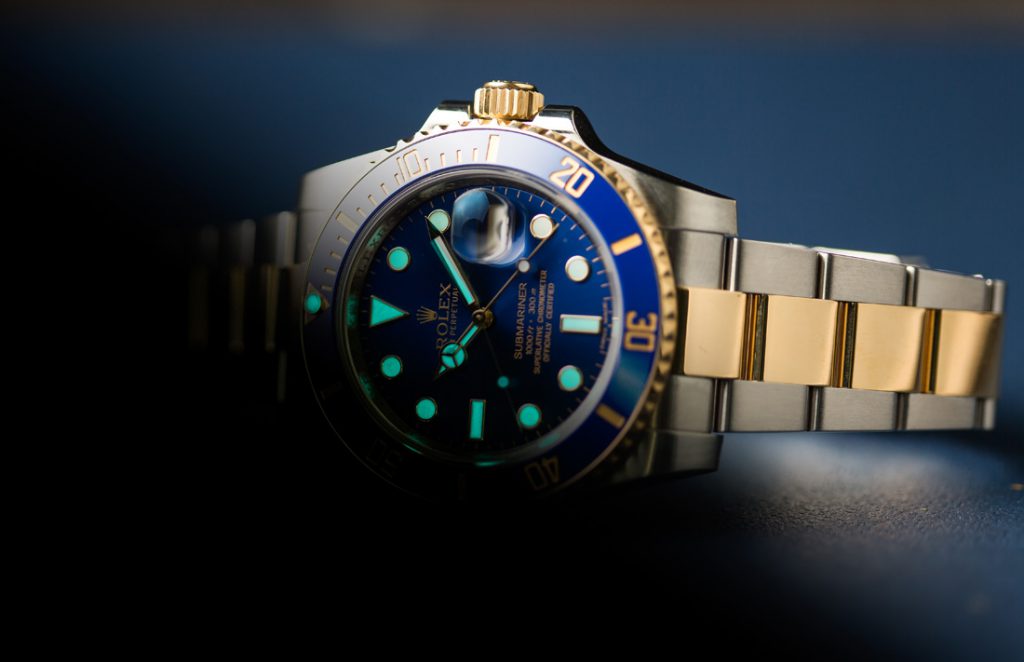 The lume would obviously, glow in the dark, but needs to be exposed to a bright light prior to its glow.

While tritium was exponentially safer than radium, it only had a half-life of twelve years. This meant that after just a few decades, only a tiny fraction of the initial luminescence would remain. Additionally, as tritium ages, the color changes, which creates interesting patinas on the luminous markers of older Rolex watches. Some like to re-lume watches others love the patina. 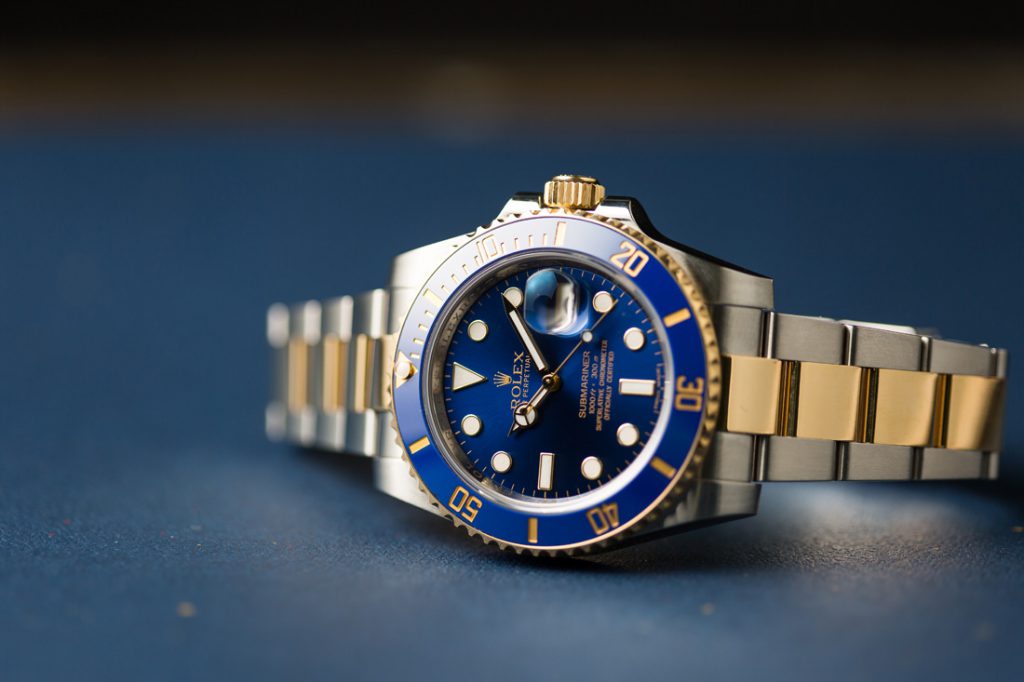 While the Submariner looks normal during its

Despite being substantially safer than radium, tritium was still radioactive, and as a result, many watchmakers of the time (Rolex included) marked the dials with an indication of the level of radioactivity emitted by the watch, such as “T Swiss T”, or “Swiss T<25”.

Tritium was far from perfect, which lead Rolex to search for a better alternative. The answer came during the 1990’s, from a Japanese company called Nemoto and Co., which specialized in producing luminous paint. Their new compound, called Luminova, was photoluminescent rather than radioactive, making it entirely harmless. Additionally, it was not prone to fading or discoloration like its predecessor, tritium.

Luminova was far superior to tritium, and by 1998, Rolex began using it on their watches. By 2000, Rolex had switched to Super Luminova, a slightly improved version of Luminova that was sold through a different supplier. 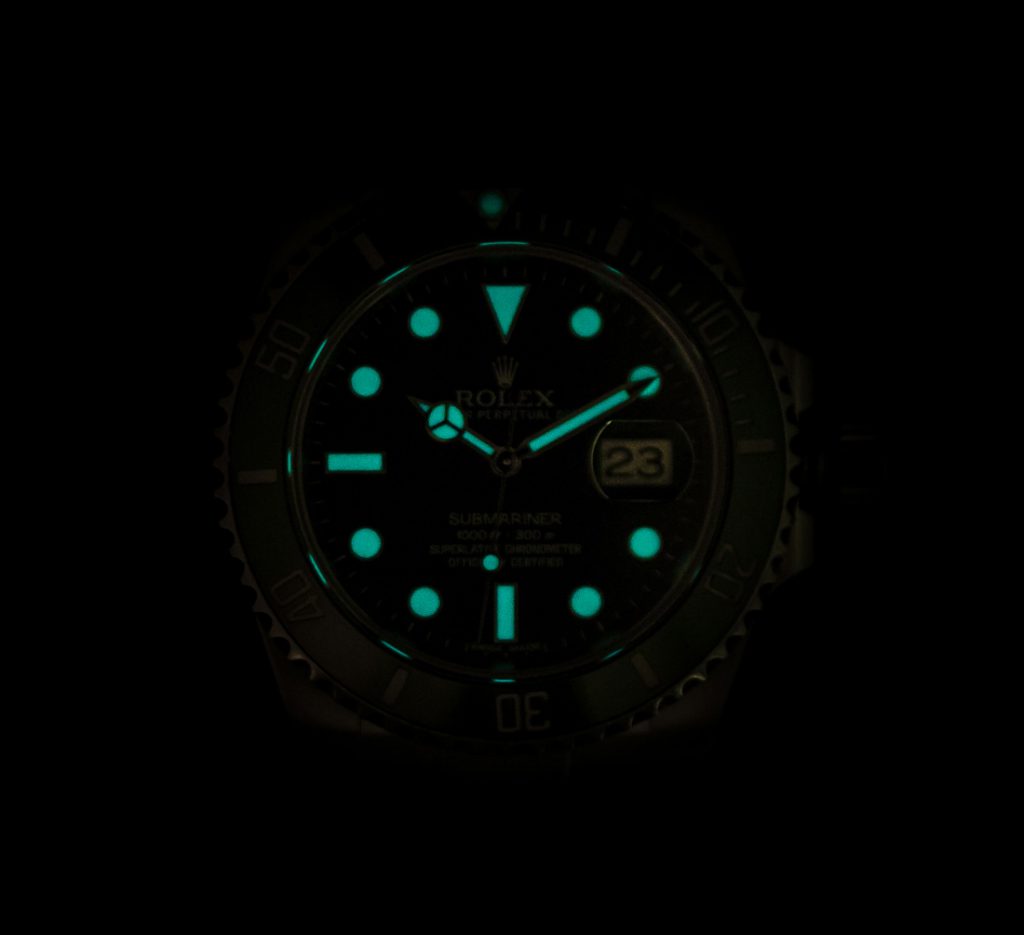 Luminova was far superior to tritium.

In 2008, Rolex announced a switch from Super Luminova to its own proprietary compound, Chromalight. Like its predecessor, Chromalight is photoluminescent and entirely safe; however, Chromalight differs in that it glows blue rather than green. Rolex states that Chromalight starts glowing more quickly and lasts longer than Super Luminova, and that the blue color makes it easier to for human eyes to read in dim lighting. Beyond that, Chromalight gives modern Rolex a distinctive appearance in dark settings, and brings yet another aspect of their production process in-house. So that is what makes a Rolex glow in the dark.

4 Responses to “The Evolution of Rolex Luminous”