All legends have a beginning, and for the Rolex Submariner, that beginning is the reference 6204. Rolex’s catalog is home to numerous horological icons; however arguably no other watch is more ‘quintessentially Rolex’ than their Submariner.

Nearly every single dive watch that exists today was (in some way or another) influenced by the Rolex Submariner – which for many, is immediately visible in their respective designs. While it holds a very special place within the history and heritage of Rolex, the Submariner is also one of a very small handful of names that belong to an elite circle of watches that have pioneered and indelibly influenced an entire genre of time-telling devices.

From deep below the surface of the ocean, to the wrist of James Bond on the silver screen, the Rolex Submariner has become an internationally-recognized cultural icon, and arguably one of the most important and influential timepieces ever created. 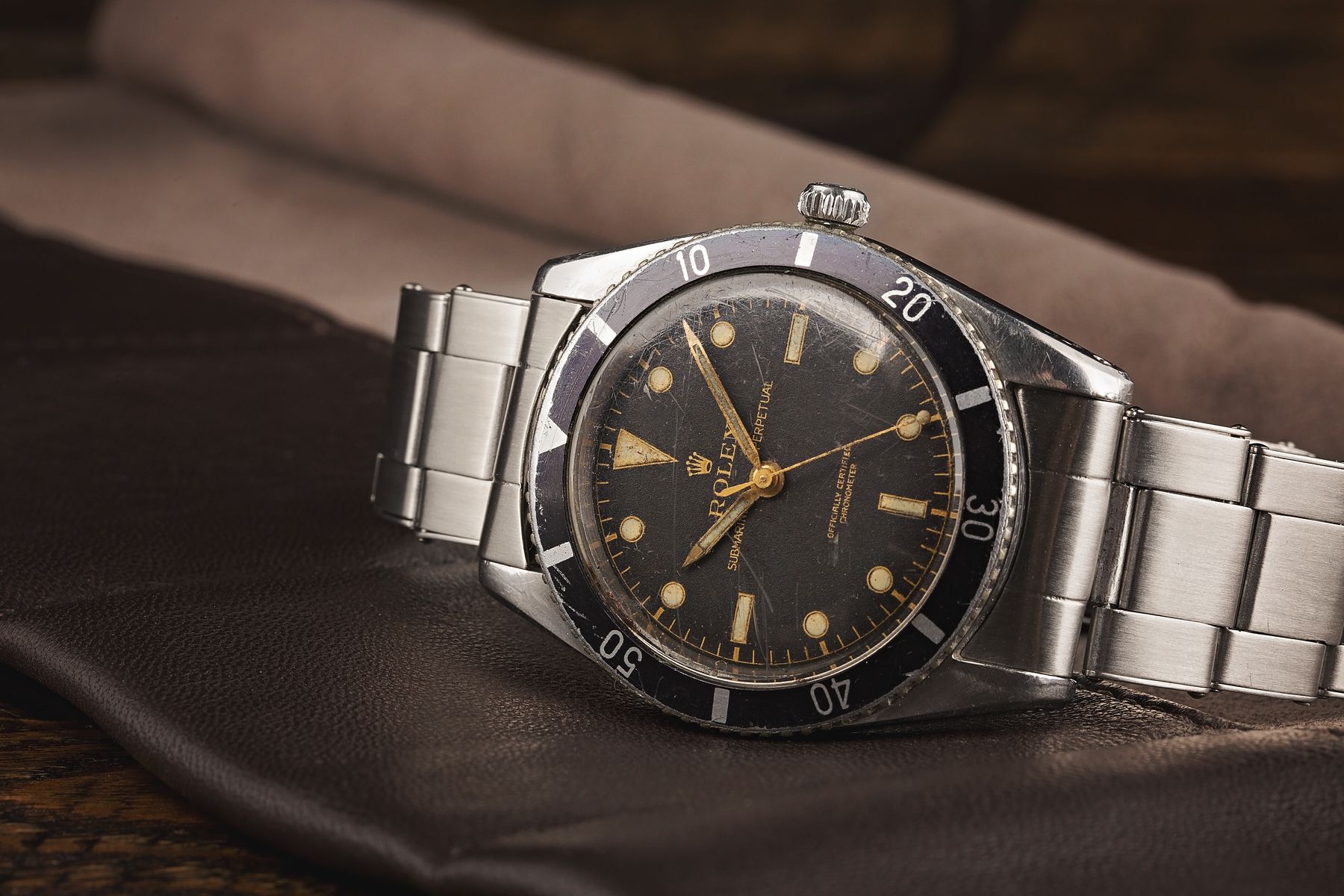 Since its introduction, the Submariner has been continuously evolving; however it still very much resembles the same dive watch that first made an appearance more than sixty years ago – and whose appearance changed the wristwatch industry forever. In order to fully understand something, it is important to understand where it came from, which is why we put together a highly detailed overview of the very first Rolex Submariner that was ever released to the public: the reference 6204.

Be forewarned, this detailed examination is not short; it’s well over 3,000 words, and is almost certainly not something that you will be able to get through while you wait for your morning coffee. However, we are building out our Rolex resource center with high quality, in-depth content, so pour yourself a cup of something tasty, make yourself comfortable, and dive deep into a historical look at the very first Rolex dive watch: the reference 6204 Submariner.

Click here for our complete historical guide to the first Rolex Submariner 6204. 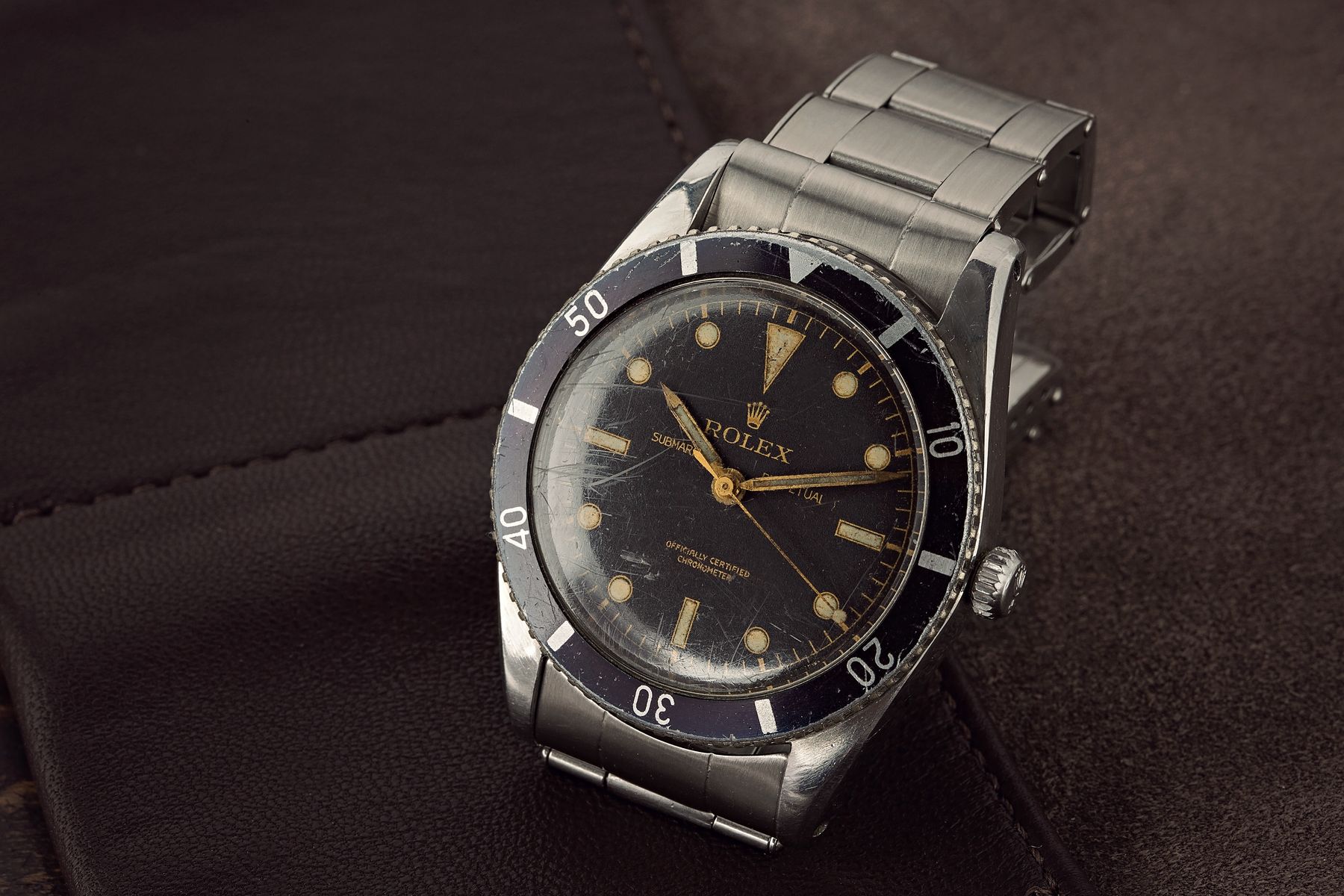 Now, for anyone looking for slightly less of a deep dive into the very first purpose-built Rolex dive watch, read on for a brief summary of the Rolex Submariner ref. 6204.

Rolex released the first Submariner in 1953. While there is some debate about which reference was actually first, it is widely believed to have been ref. 6204. Three different Submariner references appeared within the first year of its existence, but most scholars and collectors believe the ref. 6204 was the very first based on the serial number engravings of surviving watches.

The Rolex Submariner was the brand’s first foray into professional dive watches that came during a time when scuba diving was still a relatively new sport. Little did the company know that the Submariner would eventually become one of the most famous watches of all time. 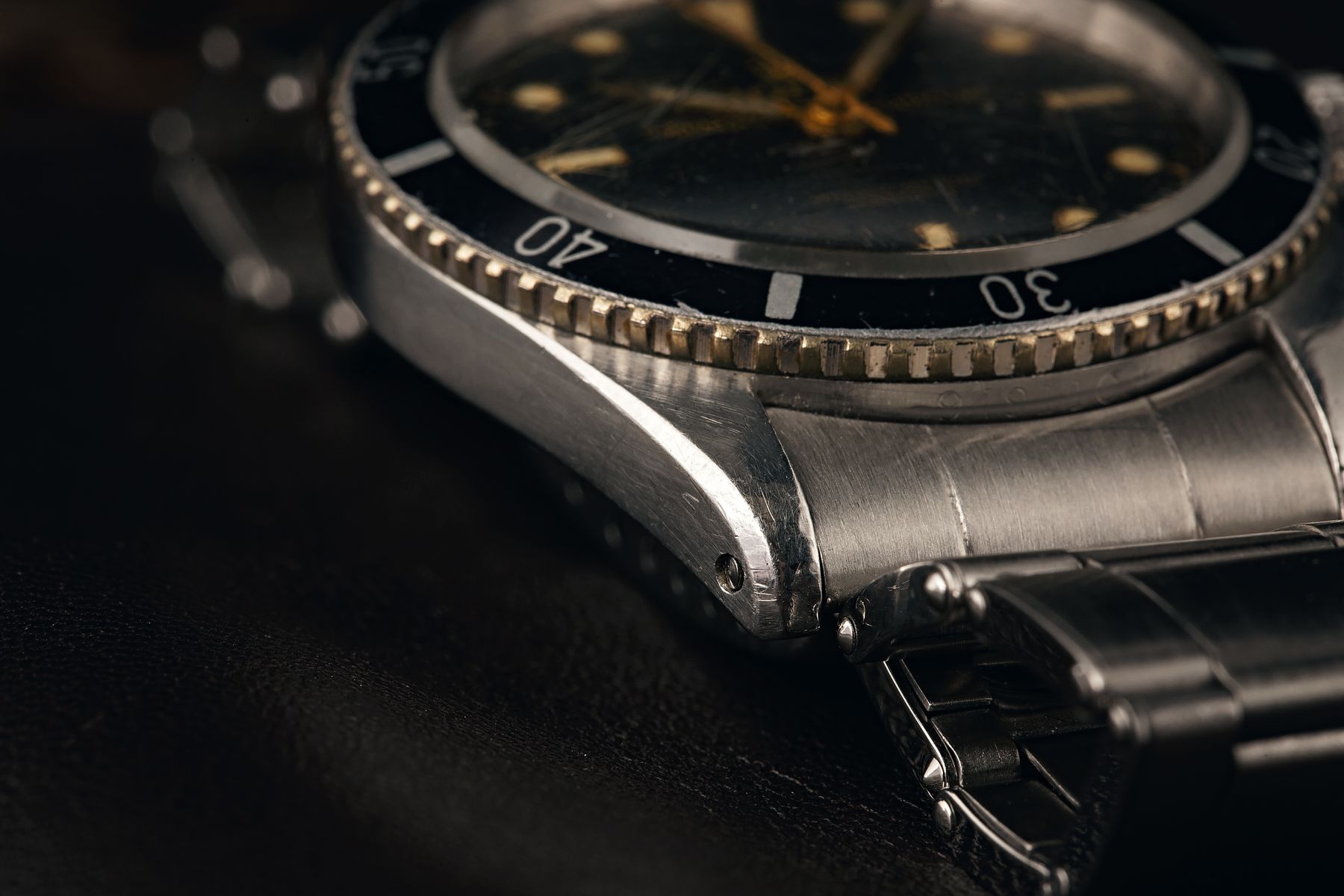 Features of this early model Submariner include a black rotating bezel topped with a 60-minute scale developed to help the wearer time various underwater events, such as decompression stops and bottom time. On the ref. 6204 it is produced in a brass alloy and then plated to match the rest of the case. Original bezels have a lower profile than service replacement bezels and even sometimes feature brass where the original plating has worn off. Depending on when the bezel was produced, it may or may not have minute hashes. “No Hash” bezels are the earliest and rarest variations.

By the time the Submariner hit the market, Rolex’s famous waterproof Oyster case had already made quite the name for itself alongside the Rolex Oyster, the world’s first waterproof wristwatch. The Oyster case on the Submariner 6204 features a “Bubble Back” case to accommodate the self-winding movement and a “small crown” screw-down crown, which granted it a water-resistance rating of 100 meters (the Submariner was the first watch to achieve a 100-meter depth rating). As a vintage model, ref. 6204 also features a thicker acrylic crystal with a distinctive domed shape. 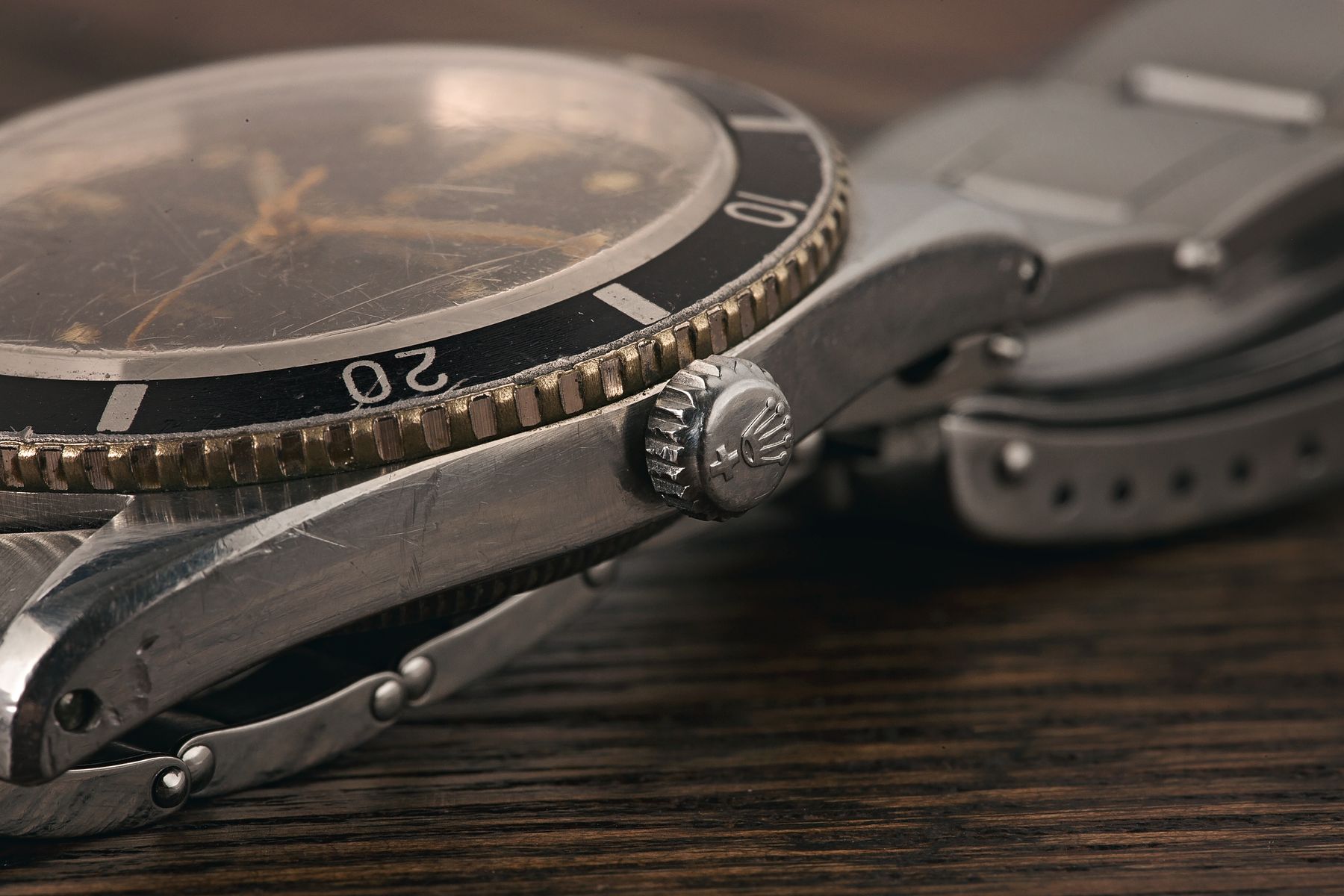 This is where things get really interesting. Ref. 6204 features what is commonly referred to as a “Gilt” dial, featuring gold text and a glossy black surface. The dial itself is actually the gold color, which is then painted over with black and treated with a glossy finish. Rolex achieves the gilt text by inversely printing it under the black layer. The glossy finish on many of the earliest examples of ref. 6204 has long since faded over time to more of a matte finish. However, if the watch received a service replacement dial sometime during the late 50s or early 60s, it may display a slightly different surface finish. Ref. 6204 dials are also slightly curved to accommodate the movement.

Part of the fun of collecting vintage Rolex watches is the seemingly countless variations that some models and references have. The first Submariner is no different. Depending on when the specific watch was produced, there are several variations of the dial. One of the rarest is the “Split Logo” dial, which features the logo printed just above and on either side of the centrally mounted hands. Two of the main variations of the Split Logo dial include either smooth or “honeycomb” or “waffle” textured dials. Additionally, some “Split Logo” dials have the distinction “Officially Certified Chronometer” at the bottom of the dial, while others don’t, and this variation only adds fuel to the excitement for collectors. 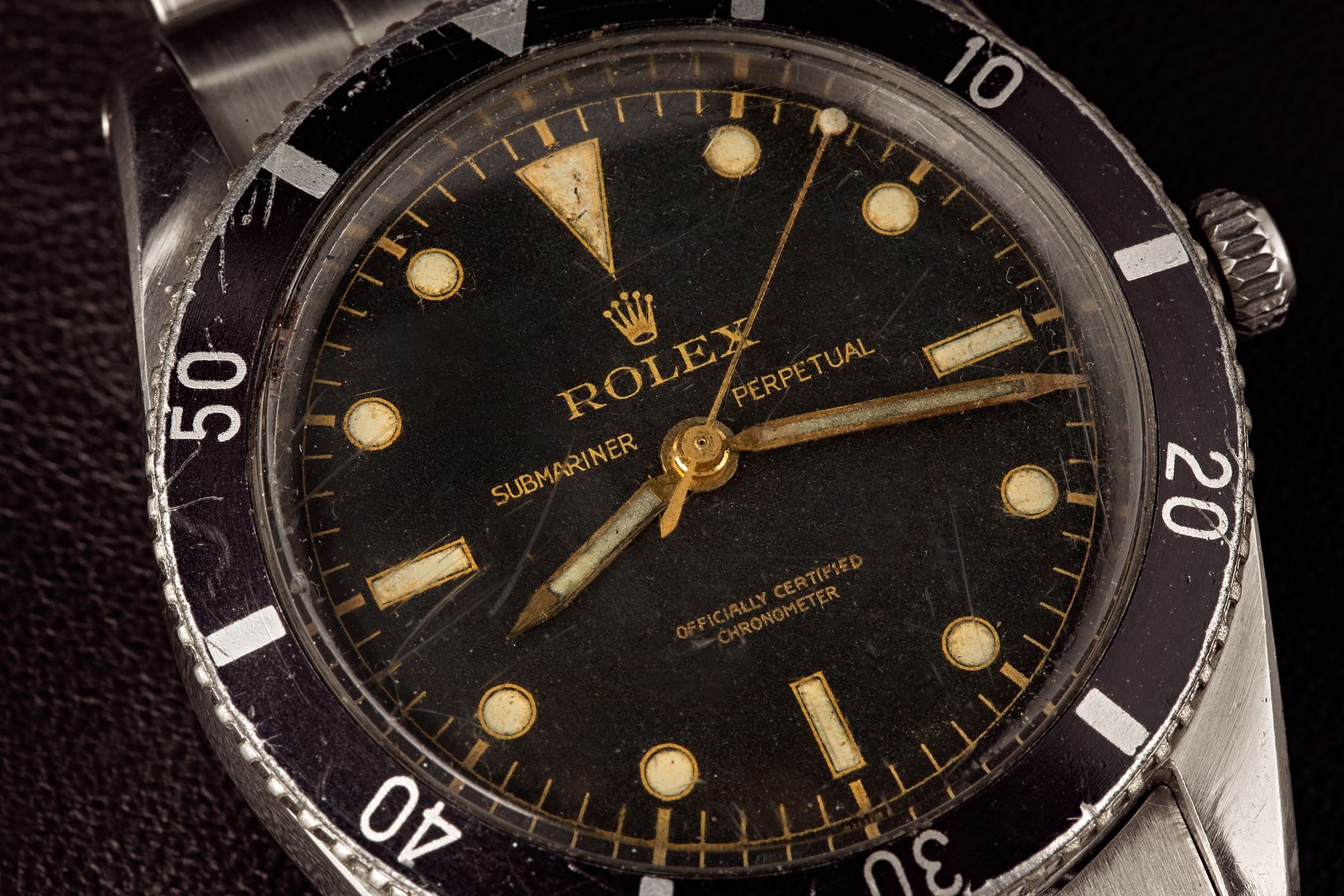 Rolex also produced several styles of hands for the reference 6204. Early examples featured the Pencil style hands with a lollipop seconds hand. Depending on the specific example, the tiny circle on the seconds hand will either be at the tip of the hand or further down towards the base of the hand. From there, the actual size of the circle will vary, with some featuring “Big Bubble” seconds hands with larger circles. There are, of course, also some examples of the ref. 6204 that feature classic Mercedes-style hands. These are often paired with Big Bubble seconds hands.

Surprisingly, Rolex only produced the Submariner 6204 for one year, making it one of the rarest and hardest to find vintage Rolex Submariner watches available. It’s exceedingly uncommon to come across one, and examples trade hands for massive sums on the secondary market. Add its unique place in Rolex history as the first Submariner on top of that, and you’ve got yourself one exceptional dive watch. 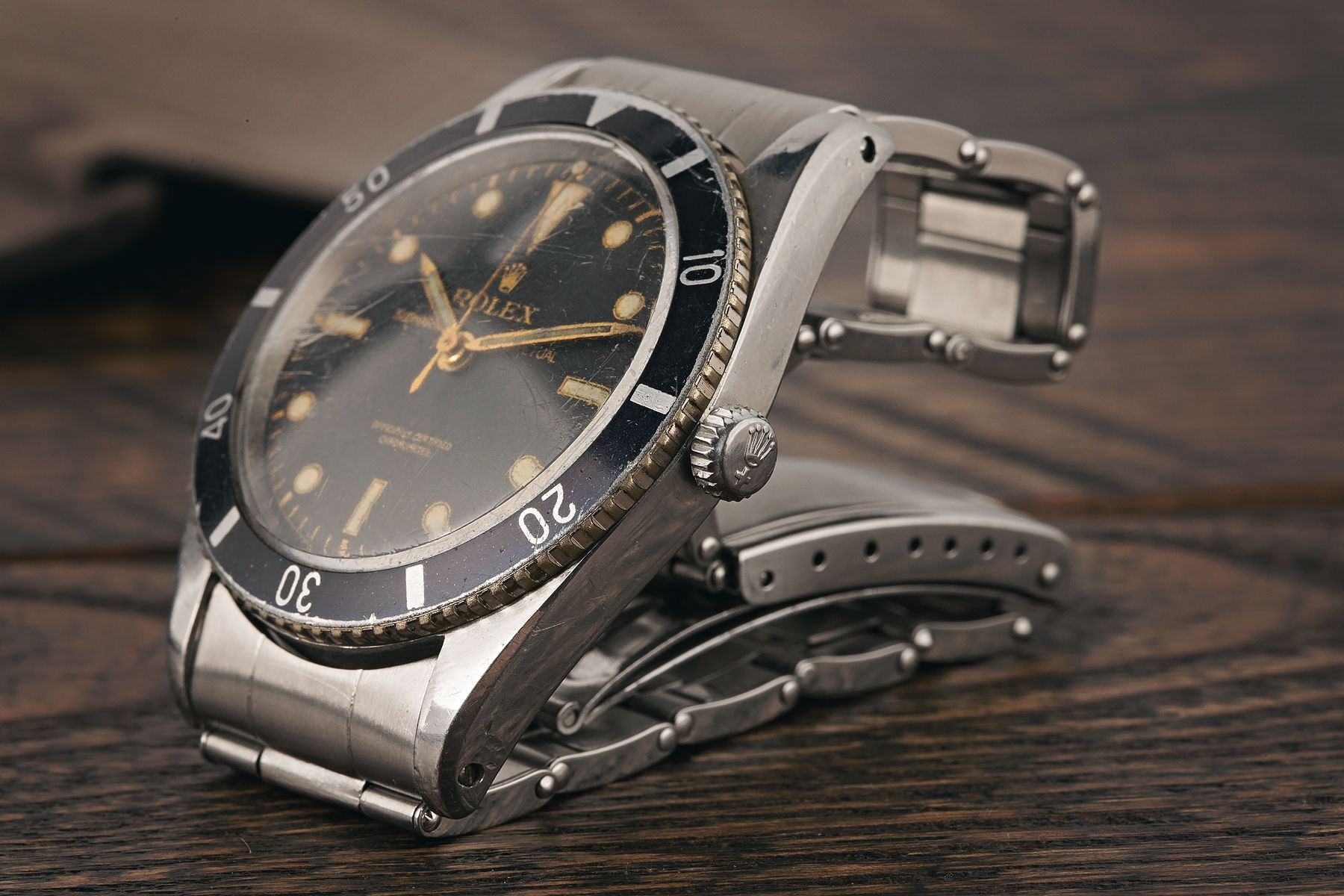