A watch so under the radar in the Rolex range that its name often draws little more than blank stares from even hardcore brand aficionados, the Rolex Prince can lay claim to being the model that first put the Swiss giant on the map some ninety years ago. 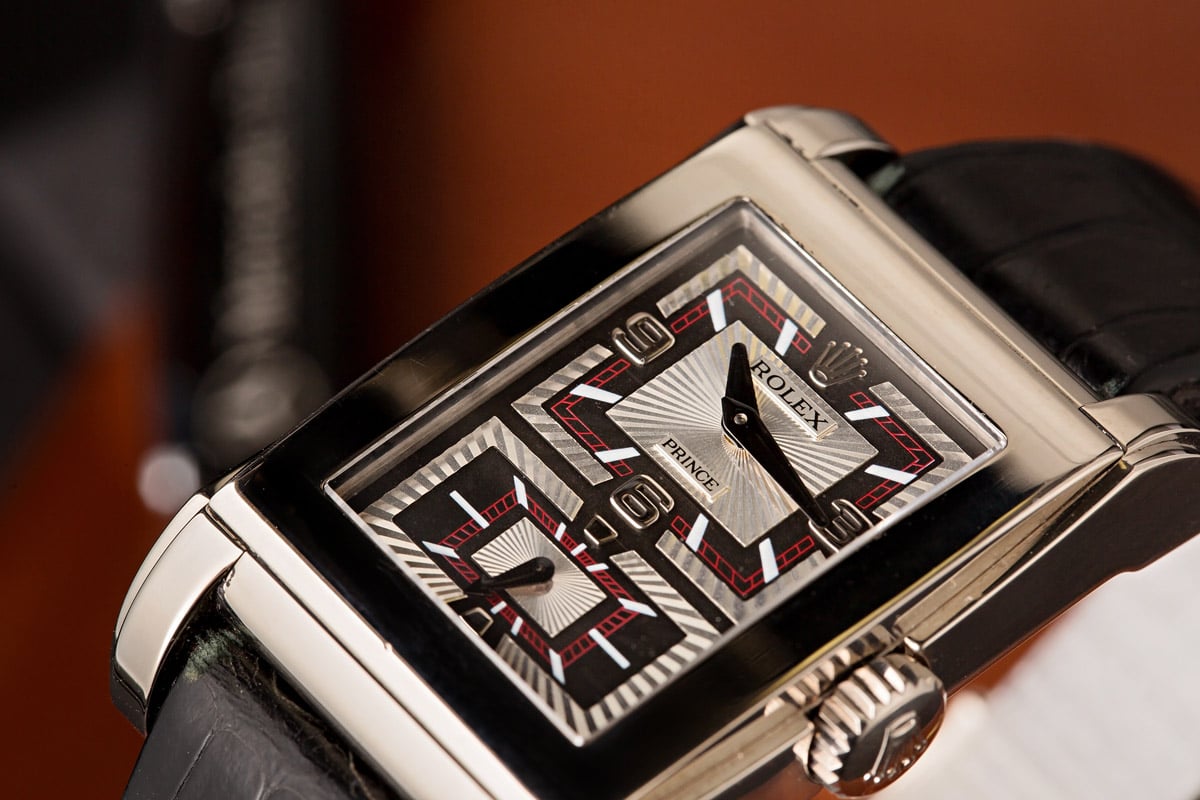 The Cellini Price is also called the “Doctor’s Watch”

Born in 1928, it was unmistakably a product of its time. Its clean lines and distinctive rectangular-shaped case ooze with Art Deco style—the movement from the roaring 20s inspired by everything from Cubism to the German Bauhaus School.

Although it was created in the same decade Rolex perfected their Oyster case and the first truly waterproof watches, the Prince by Rolex always sat apart; perhaps the dressiest of the company’s dress pieces, it was never meant for the sort of situations that would require a tough, tool-like robustness.

Instead, it was created to complement an exquisite formal outfit; a subtle final flourish to top off white tie and tails and a watch for special occasions. It did, however, gain a fan base among one very specific group of professionals for its practicality. 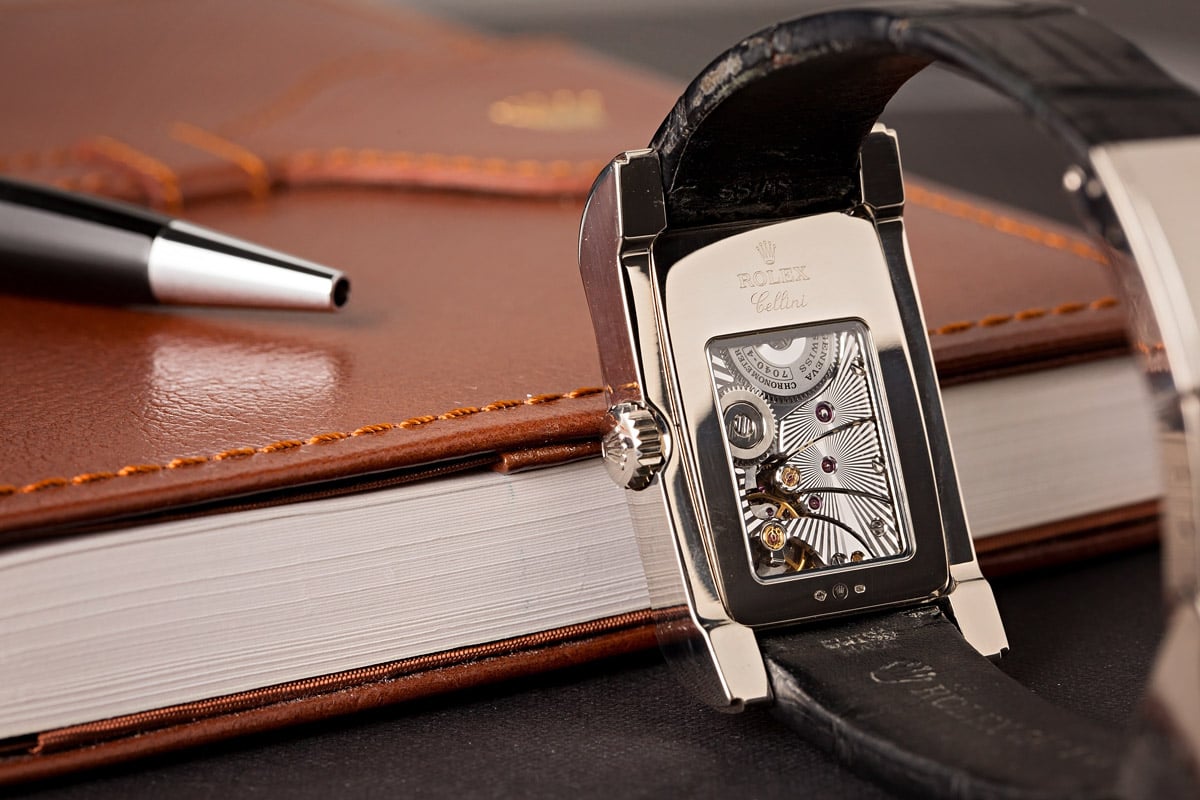 There is a display on the back to see the inner workings of the watch.

The Prince soon became known as ‘The Doctor’s Watch’, as its relatively large seconds sub dial was the ideal instrument for helping physician’s time a patient’s pulse. Crafted exclusively in gold, it was also priced at a point that few other than those on a doctor’s salary could afford.

Its twenty year run was a huge success, and it helped sow the seeds of the reputation Rolex enjoys today, as makers of some of the finest and most reliable watches money can by. The uncompromising quality of manufacture and the attention to detail in the styling helped the Prince find a well-heeled and appreciative audience, at a time when wristwatches for men were still being seen as little more than a gimmick.

On top of that, it started to set Rolex aside as an aspirational brand—their watches were what you bought when you had ‘made it’, in whatever manner your ‘making it’ took. Al Capone for instance, if rumors are to be believed, wore a Prince.

Nevertheless, by the 1940s, the Prince’s race had been run. The florid styling of Art Deco was a far off reminder of happier times, before the Great Depression and the horrors of WWII had influenced art and design with a new realism, and the line was discontinued.

But, more than half a century later, it was back. A new Prince for a new age, and a rare beauty amongst a sea of familiar faces.

The Rolex Cellini Prince was back in commission with a new look.

In 2005, Rolex reintroduced the Prince to their line of ultra-sophisticated dress watches, the Cellini range.

Rather than being a thin homage in name only, this version for the new millennium is an almost identical throwback to its Gatsby-era brethren.

That unique rectangular case is back, as is the two dial layout, the only concession made to modern times being a slight increase in size to 47mm in height and 28mm across. Released in four models, two in white gold, and one each in yellow and Everose, the extraordinarily precise styling on the dial looks almost more Art Deco than Art Deco ever did.

The intricate guilloche detailing varies across the range—the yellow gold piece is studded with the hobnails of Clous de Paris, more familiar to Patek Philippe’s Calatrava, while the first of the white gold examples comes with the spiraling patterns of Godron Circulaire. The Everose and the remaining white gold models share the radiating sunlight motif known as Rayon flammé de la gloire, with the latter sporting a stunning black, white and red palette that adds an extra dimension to the otherwise monochrome offerings.

The cases too have their own embellishments, with machined sections adding a Deco-esque, industrial aesthetic, along with a variation on the more common fluted bezel. It all adds up to some of the most impossibly elegant watches the crown have ever produced, reminiscent of Cartier’s Tank or Jaeger-LeCoultre’s Reverso range.

Inside, vintage and modern meet again, with the Cal. 7040. The COSC certified movement is fitted with all the pioneering innovations that make their way into Rolex’s class-leading automatic calibers—Breguet overcoil on the hairspring, Microstella regulation and Paraflex shock absorbers—but in a manually-wound mechanism.

While, as a brand, Rolex is famed for bringing us the convenience of the Perpetual movement, there is something oddly fitting about winding a dress watch yourself. And with their microscopically exact engineering, it is a tactile pleasure. 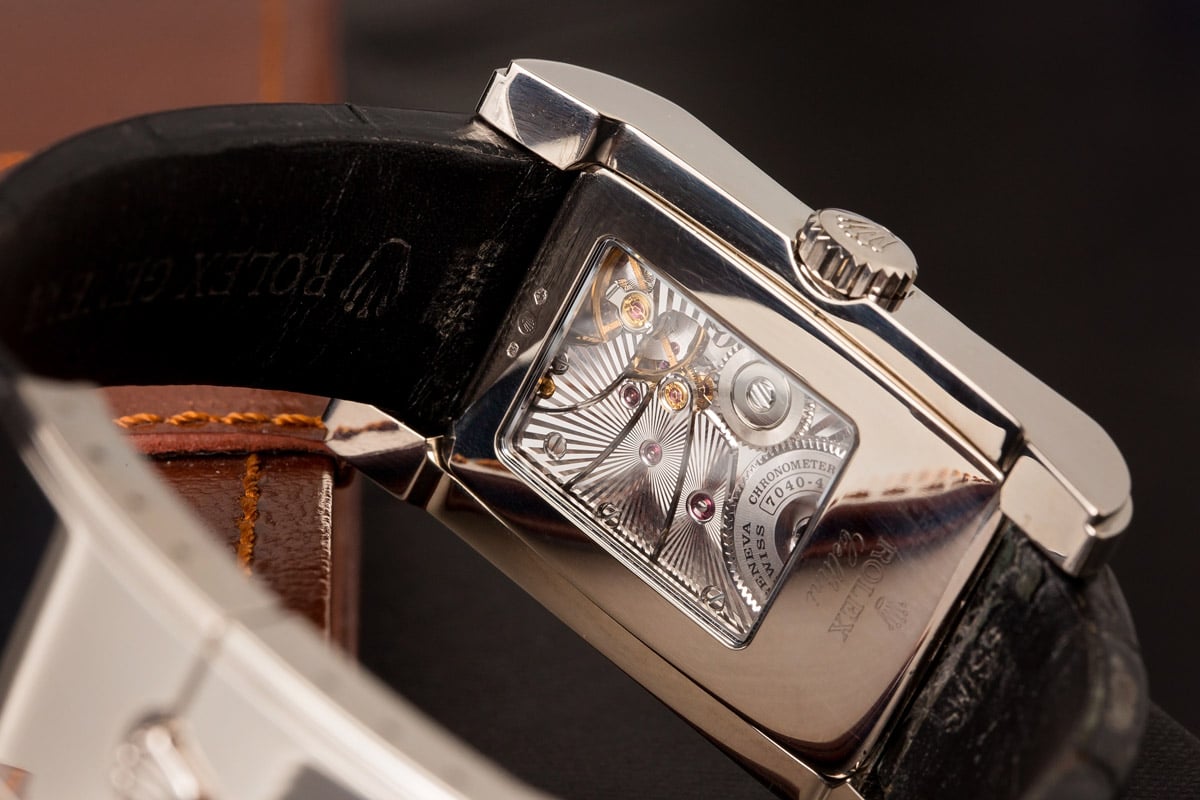 This is one of very few watches that Rolex will create with a caseback like this.

What Rolex is most definitely not famed for is showing off all the hard work that goes into one of their engines. Unlike other fine watchmakers, the going’s on inside their cases are usually hidden from view, but with the Prince, joy of joys, they have fitted a display back to allow owners to observe the Cal. 7040 in action. And it is certainly worth a look.

Like the original, which had calibers supplied by legendary manufacturer Aegler, the latest Prince has a shaped movement, with the winding barrel at one end and the balance at the other. In between, the set up leaves room for a longer mainspring, giving a power reserve of 70 hours. Additionally, in a completely anti-Rolex fit of whimsy, the bridges on the 7040 are finished with the same stylistic form as displayed on the dial. So, for example, the tasteful swirls of the Godron Circulaire are echoed front and back on the white gold ref. 5441/9.

It is just another subtle touch that further separates the Prince from anything else in the Rolex stable, even other pieces in the Cellini range. There is nothing about the watch that shouts Rolex, no discernible brand theme, and it makes it one of the most fascinating models in their long history.

Whereas the company has intentionally designed the majority of their output to be the only watch you would need in any situation, the Prince does one thing and one thing only; it is an impeccable piece of jewelry, to be worn only in very special circumstances. 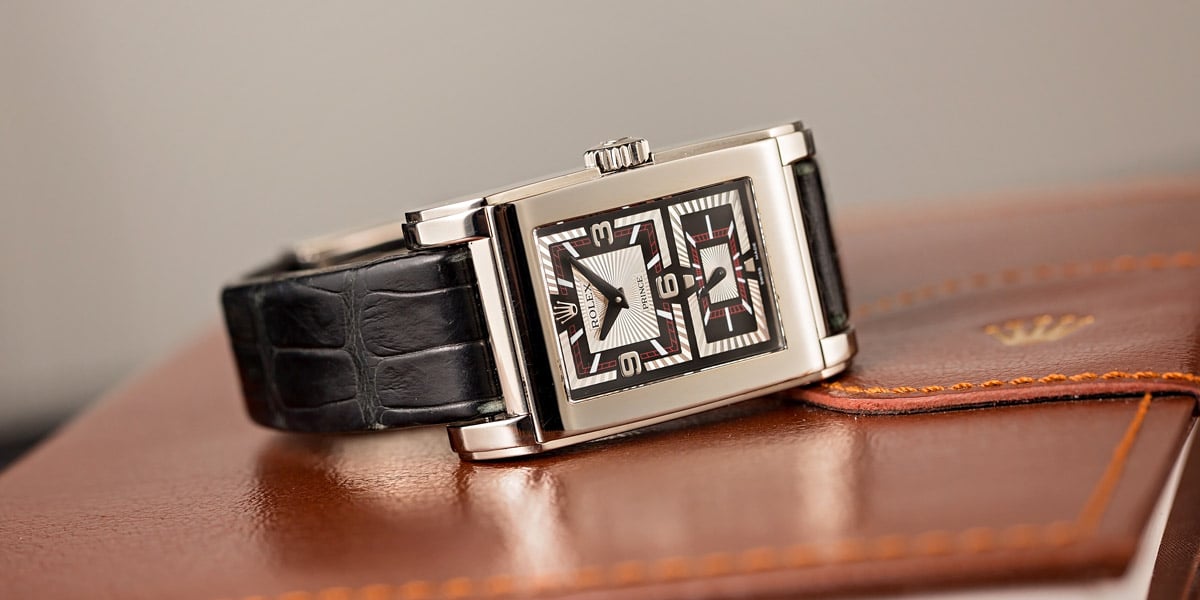 The Rolex Cellini Prince is a watch with a unique case. What are your thoughts on this piece?

Sadly, the Cellini Prince was discontinued for the second time in 2015. The four models were never produced in especially large numbers, making them relatively rare on the pre-owned market, but the ones that are on offer represent something of a bargain and a particularly savvy investment.

Rolexes, and specifically unorthodox Rolexes produced in limited quantities, have a habit of picking up classic status a few years down the road. The Cellini Prince ticks all the boxes and we wouldn’t be surprised to see them rise in value in the not too distant future.

And, even if they don’t, they are still a beautifully elegant and superbly engineered chapter in the Rolex story.