Of all the design details of the Rolex GMT-Master, it is the watch’s bezel that is the most distinguishing. Characterized by 24-hour markings and the ability to rotate in both directions, the GMT-Master’s bezel is an integral part of how the watch indicates multiple time zones. However, aside from its functionality, the design of the bezel also contributes significantly to the style of the Rolex GMT-Master – particularly when it is in a two-tone colorway.

While the fundamental look of the GMT-Master bezel has remained relatively unchanged over the last six decades, there have been important changes to the materials used. From Bakelite to aluminum to Cerachrom (ceramic), join us as we delve into the complete evolution of the Rolex GMT-Master bezel. 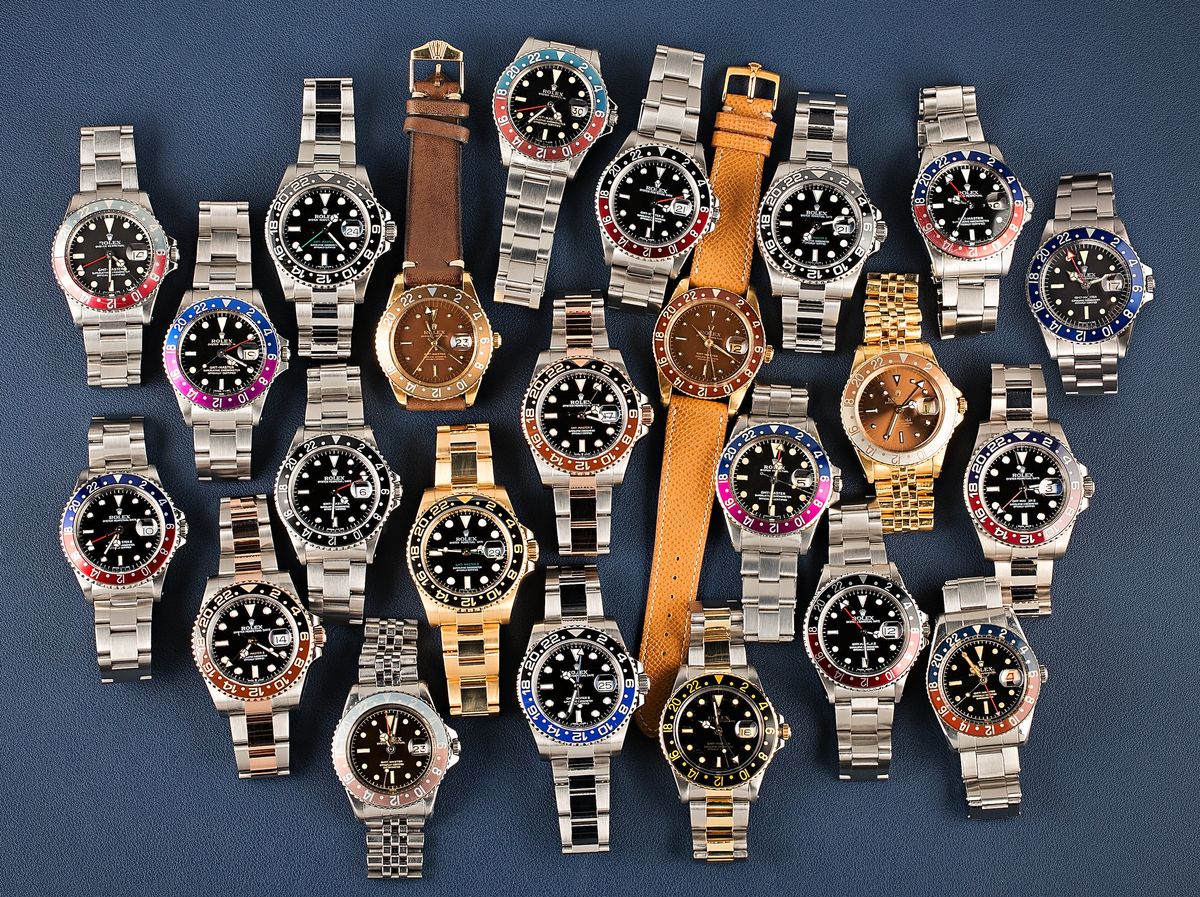 Rolex has made an assortment of different bezels for the GMT-Master over the decades. Various materials have been used – Bakelite, aluminum, Cerachrom (the brand’s proprietary ceramic material), and precious gems – and these GMT bezels have been offered in a range of different colors.

The timeline below outlines the approximate debut dates of each of the different types of Rolex GMT-Master bezels.

Click here to learn more about the complete history of the Rolex GMT-Master.

When Rolex unveiled the first GMT-Master (reference 6542) in the mid-1950s, the watch came equipped with a bidirectional rotating bezel with a two-tone Bakelite insert featuring radium luminous markings. Bakelite was the world’s first entirely synthetic plastic that was lightweight, relatively durable, and easy to mold into different shapes.

Given those characteristics, Bakelite was initially considered a good material choice for the bezel insert of the GMT-Master watch. However, it was soon apparent that Bakelite was too brittle and had a tendency to crack – plus the radioactive glowing numerals embedded into it also posed a potential health hazard.

Therefore, Rolex switched over to non-luminous aluminum bezel inserts for later GMT-Master 6542 models in the late 1950s. Furthermore, Rolex service centers also typically replaced any damaged Bakelite bezels with aluminum ones. As a result, it is incredibly difficult to find a vintage Rolex GMT-Master 6542 with its original Bakelite bezel today, and many of the surviving original Bakelite inserts show significant signs of wear or damage.

Rolex made two different Bakelite bezels for the GMT-Master ref. 6542. There was the bi-color blue and red version for the stainless steel models, later nicknamed the “Pepsi” bezel. The other Bakelite bezel was a single-color burgundy one that was fitted to the solid 18k yellow gold GMT-Master 6542 watches.

Legend has it that Rolex opted for the split-color design to make it easier for pilots to differentiate between night and day hours – the red portion contained the daylight hours while the blue section had the nighttime ones. However, others maintain that its bi-color appearance was intended to mirror the design of the attitude indicators that were fitted to various aircraft at the time. Either way, a split-color bezel is now considered to be one of the hallmark traits of the Rolex GMT-Master collection. 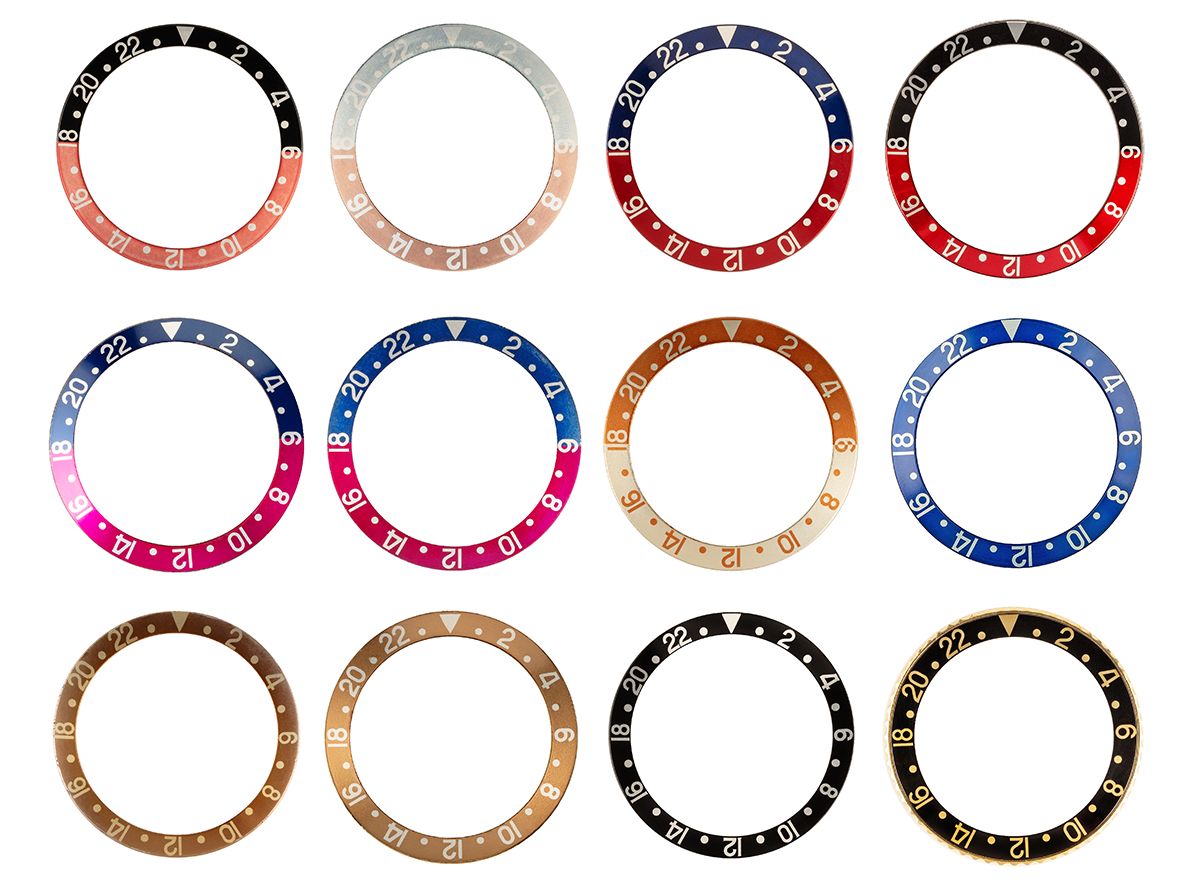 Although the ref. 6542 was eventually fitted with an aluminum bezel insert, the GMT-Master ref. 1675 was the first one designed specially to sport an aluminum bezel. The Rolex GMT-Master 1675 was introduced in 1959 and it continued to be a part of Rolex’s catalog until 1980. The stainless steel versions were first only offered with the signature blue and red bezels but these were later followed by the option of an all-black bezel in the 1960s.

It’s also important to mention the controversial all-blue “Blueberry” bezel from the steel GMT-Master ref. 1675 from the seventies. These are considered to be somewhat controversial since they were never something that Rolex formerly offered the public. Some claim that these blue GMT-Master bezels were special order ones for the United Arab Emirates government, while others assert that they’re not genuine Rolex bezels at all.

The yellow gold GMT-Master 1675/8 models first came equipped with brown aluminum bezels but these were later joined by the choice of a black bezel insert. In the 1970s, Rolex released a two-tone steel and gold model, the GMT-Master ref. 1675/3, which came with three bezel options: bi-colored brown and gold bezel (aka “Root Beer”), all-brown bezel, or all-black bezel.

However, stepping back a little to 1982, Rolex launched the first GMT-Master II model. Along with introducing a new type of GMT movement where the 12-hour and 24-hour hands are independently adjustable, the Rolex GMT-Master II ref. 16760 also debuted a new bezel color scheme – red and black, also known as the “Coke” bezel. In fact, the GMT-Master II ref. 16760 only came in stainless steel and was only offered with the red/black Coke bezel.

Lastly, it is also worth mentioning that among the various aluminum bezel inserts, each generation for each reference can have multiple sub-variations and this is particularly true of the older vintage references. Details such as the thickness of the font or slight variations in the style of the numerals themselves can allude to the year of production, and you often hear terms such as “fat font” or “oval 8” being used to further describe the bezel inserts on vintage Rolex GMT-Master watches.

It’s important to mention that aluminum bezels have a tendency to fade over time, especially with prolonged exposure to the sunlight. However, aluminum bezels do not all fade in the same manner. This explains why you’ll often see a wide range of colors present among vintage GMT-Master watches with faded bezels.

For instance, some Pepsi aluminum bezels have faded in such a way that the once-red portion is now light pink, light orange, or even bright fuchsia – it really just comes down to the age of the insert and the specific conditions that it was exposed to during its lifetime.

2005 marked the 50th anniversary of the GMT-Master watch. To celebrate, Rolex released an entirely revamped GMT-Master II model complete with a redesigned case, a new movement, and most importantly, a brand new material for the bezel.

Rather than printed markings like on aluminum bezel inserts, the 24-hour scales on Rolex’s new Cerachrom bezels require a much more complex manufacturing process. The numerals and markings are first molded into the material and then the whole insert is subjected to Physical Vapour Deposition (PVD) where the surface is coated entirely in a layer of yellow gold, pink gold, or platinum. The metal is then polished away from the ceramic surface leaving behind metal-filled graduations. Initially, Rolex only offered the Cerachrom bezels across all three metal cases in monochromatic black, claiming that it would be impossible to produce a two-tone version from a single piece of ceramic.

However, in 2013, Rolex seemingly did the impossible by introducing the stainless steel GMT-Master II ref. 116710BLNR with a bi-color, black and blue Cerachrom ceramic bezel insert. Like all split-color GMT bezels before it, this one quickly picked up a nickname and it’s now known as the Rolex “Batman” among collectors and enthusiasts.

This was the world’s first single ceramic component featuring a two-color combination and made major headlines when it first made an appearance. To achieve this two-tone ceramic insert, Rolex adds a special solution to one half of the bezel, then during the sintering process, that treated area transforms into another color.

Today, all of the current-production Rolex GMT-Master II models come equipped with two-tone Cerachrom bezels, regardless of their metal type (except for the gem-set versions). Although the all-black bezel insert had been an option since the 1960s, Rolex no longer offers single color bezels for the current GMT-Master II collection. 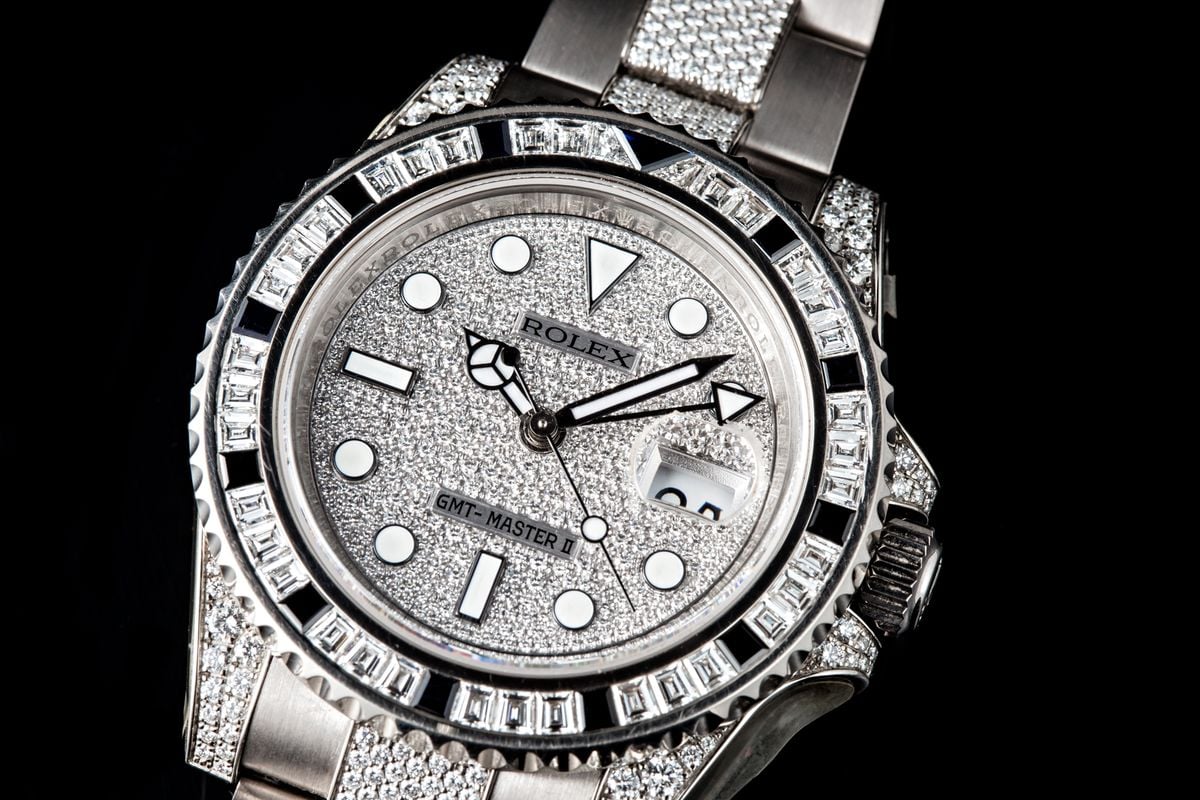 Shortly after the debut of the GMT-Master II Cerachrom bezel, Rolex rolled out a capsule collection of highly exclusive gem-set GMT-Master II models. These models feature precious gems such as diamonds, sapphires, and rubies set into the bezel rather than the standard 24-hour scale layout. However, Rolex sets the gems into the bezel in such a way where the scale is still somewhat decipherable, complete with an upside-down triangular-cut gem at the 12 o’clock location. There are even some gem-set Rolex GMT-Master II bezels with diamonds, rubies, and sapphires that mimic the iconic red and blue ‘Pepsi’ colorway.

Additionally, Rolex also unveiled the GMT-Master II ref. 116769TBR in 2007. Blanketed with over 30 carats of diamonds set into its case, dial, bezel, and bracelet, the Rolex GMT-Master II “Ice” retailed for a whopping $485,350. Unlike the other gem-set GMT-Master II bezels, the Rolex “Ice” bezel is only rendered in one color, consisting almost entirely of baguette-cut diamonds and one triangular-cut diamond at 12 o’clock. 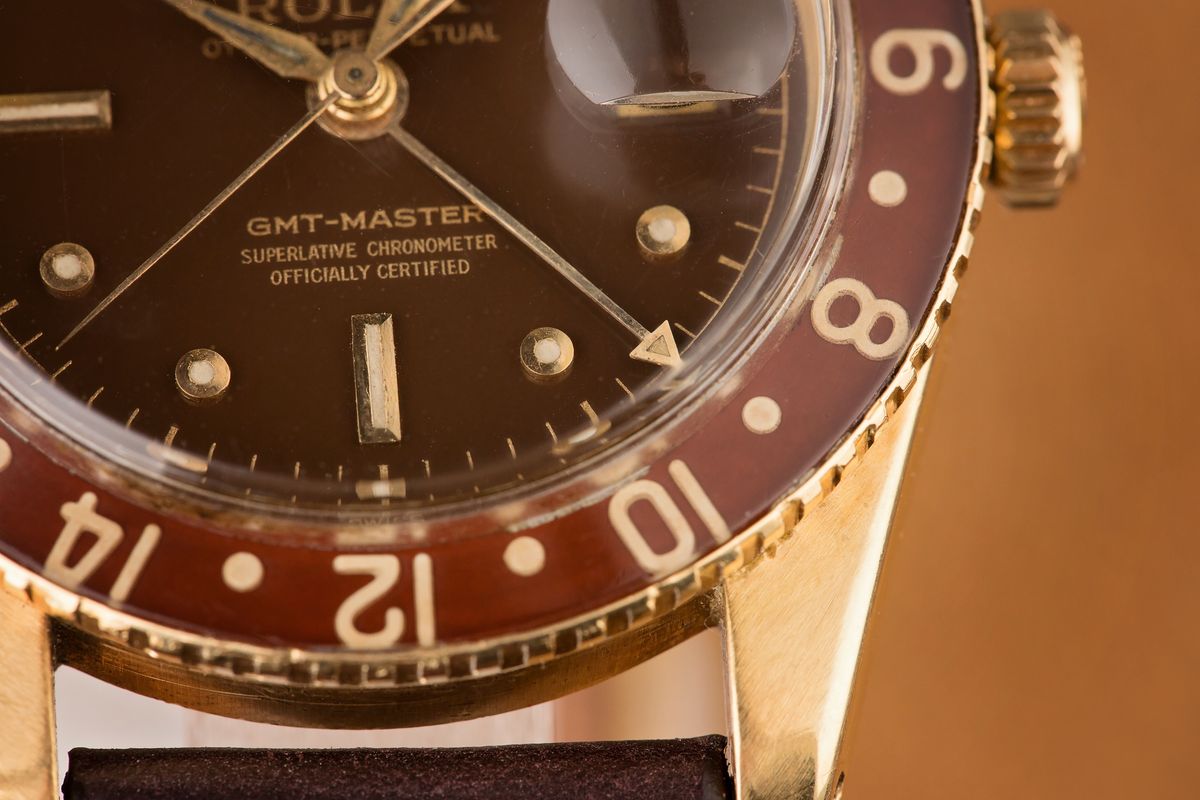 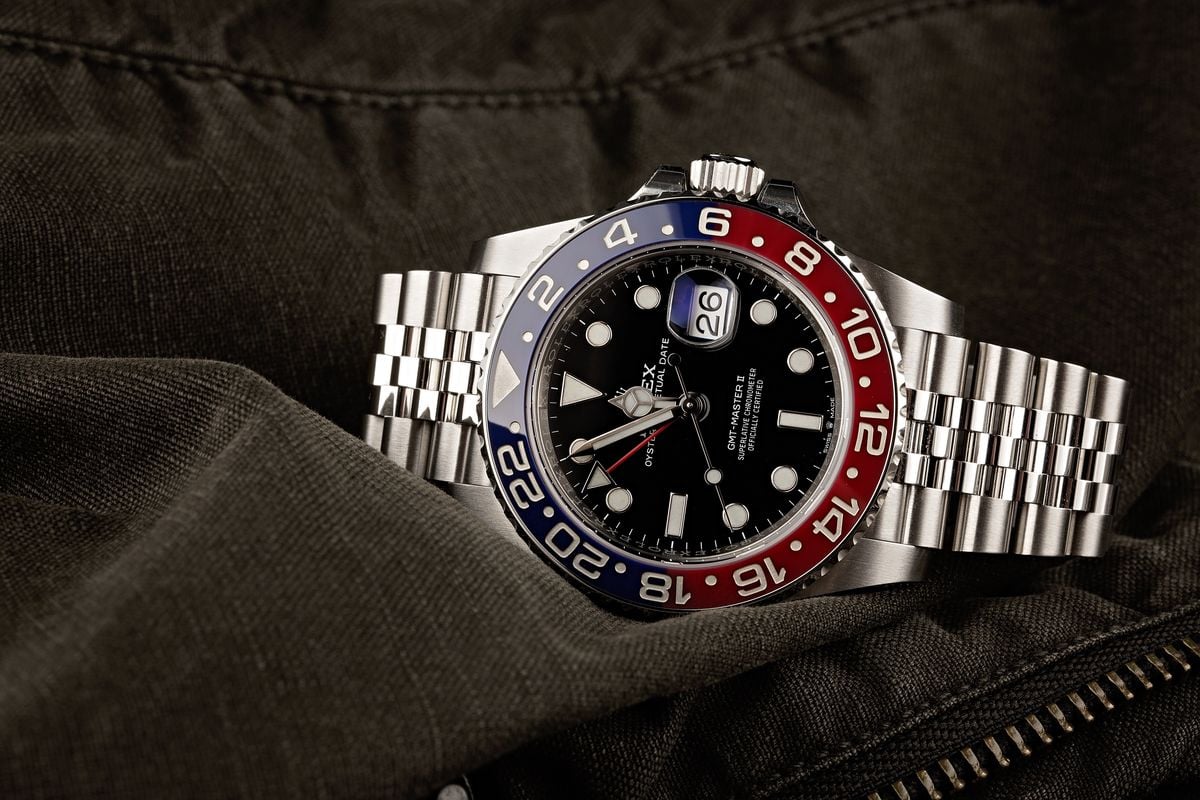 Below is a table of the various Rolex GMT-Master and GMT-Master II bezel types (excluding the gem-set bezels) with approximate production dates.

The evolution of the GMT-Master bezel perfectly illustrates the Rolex approach of taking an essential design detail and incrementally updating it by using new materials. Just like the various Rolex watches themselves, the individual components steadily improve and evolve, all while staying true to the fundamental style that defines its iconic appearance. 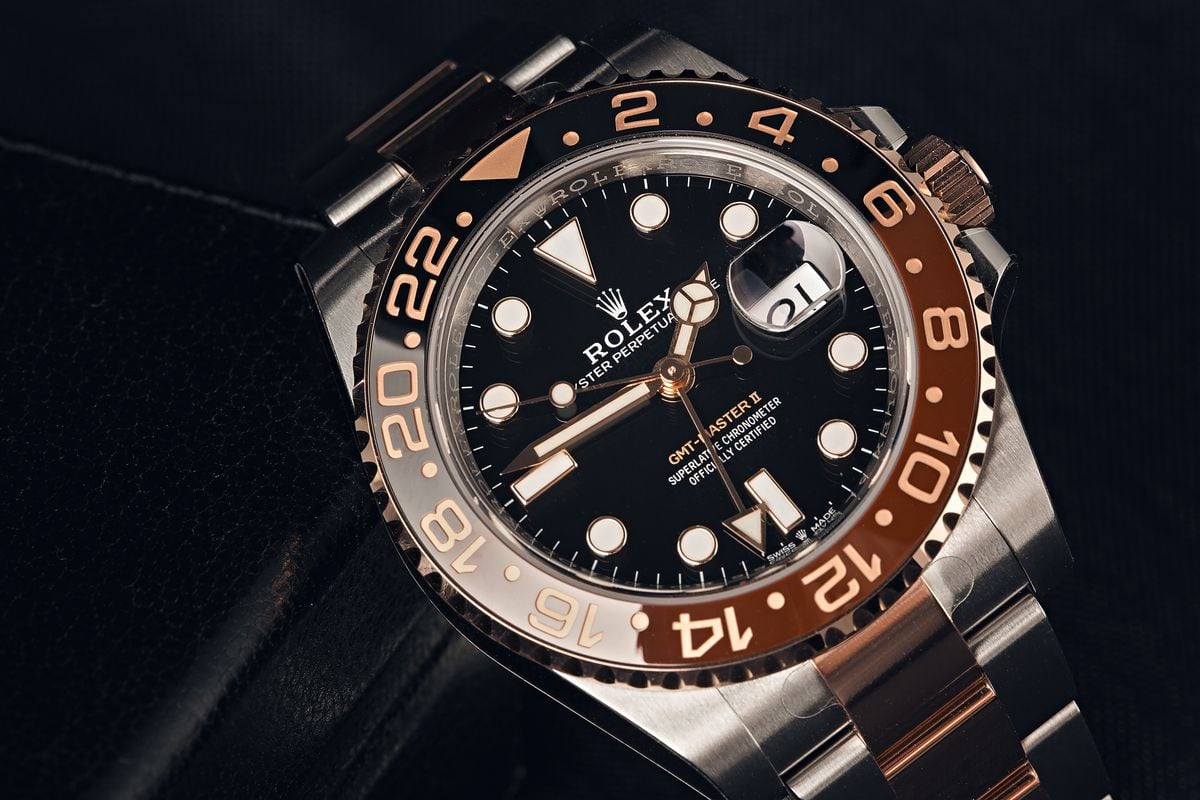