The watch world is abuzz today with the release of two new Explorer references and one new Explorer II.  Many speculated that the iconic adventurer’s tool watches might receive an upgrade as this year also marks the 50th anniversary of the Explorer II series.  However, it remained a mystery until this morning when Rolex unveiled their newest offerings during the Watches and Wonders event.  In a surprising move, the Explorer received a two-tone finish and a scaled-down case size, while the Explorer II now features the cal. 3285 and a few aesthetic upgrades. 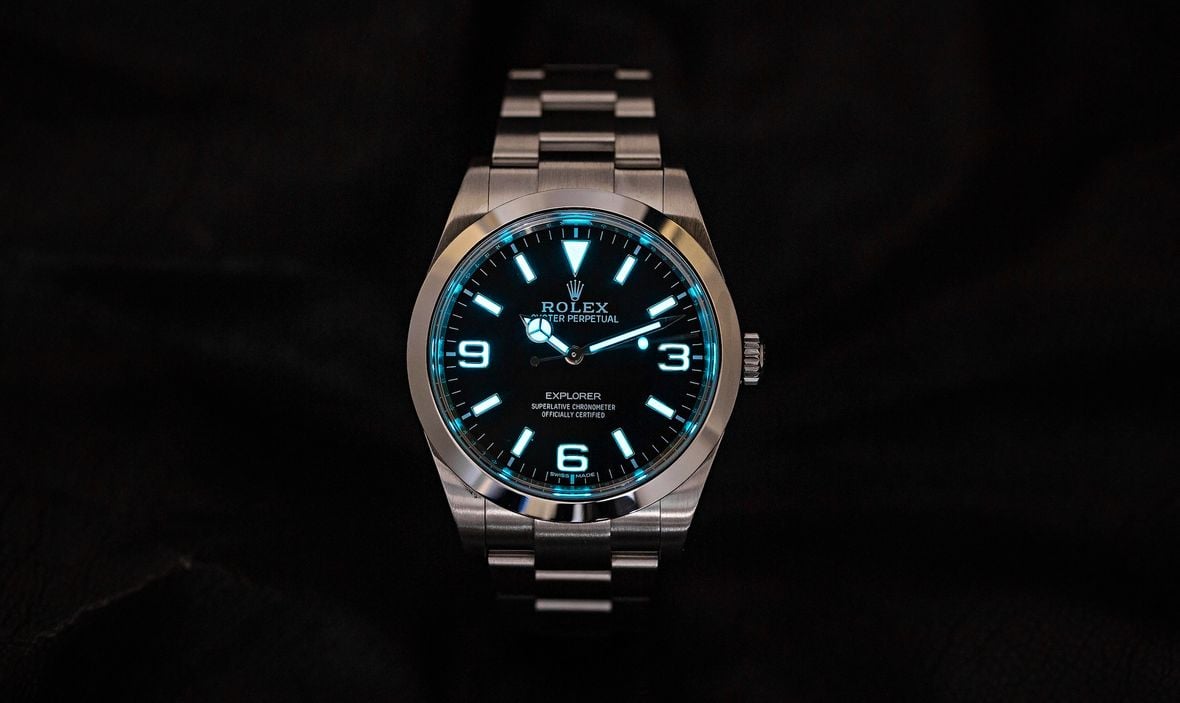 The Explorer is one of Rolex’s most underrated models.  While the Submariner, GMT Master, and Daytona all feature rotatable bezels and complicated functions, the Explorer keeps it simple with a time-only dial and a smooth bezel.  It’s this elegant simplicity and versatility as an everyday watch that attracts so many collectors to the Explorer collection.  Since it first hit the market shortly after Sir Edmund Hillary and Tenzing Norgay became the first people to reach Mount Everest’s summit in 1953, the Explorer’s design has remained largely unchanged.  That is until today.

For decades, the Explorer kept the same 36mm case and iconic 3-6-9 dial configuration.  In 2010, Rolex answered a growing trend for larger wristwatches by releasing ref. 214270, complete with a slightly larger 39mm case. The Explorer logo also moved from the 12 o’clock position down to 6 o’clock.  The 2021 Explorer ref. 124270 takes the collection back to its roots with a 36mm case and the return of the Explorer logo at 12 o’clock.

With the new collection comes the integration to the caliber 3230, which Rolex released in 2020.  It features the brand’s patented Chronergy escapement with a more efficient skeletonized structure and anti-magnetic nickel-phosphorus material.  The movement also offers a greater power reserve of up to 70 hours and utilizes the already-established Paramagnetic blue Parachrom hairspring and Paraflex shock absorbers.

– Only ever manufactured in stainless steel.

– Only fitted with either black or white (“Polar”) dials.

– Features a date display at the 3 o’clock location.

Perhaps the most surprising release this morning was the Explorer ref. 124273.  For the first time since the model came to market in the 1950s, the Explorer is available in two-tone.  Also known as “Yellow Rolesor,” the finish combines 904L-grade Oystersteel with 18k yellow gold, both forged in-house.  The notoriously rugged mountaineer’s tool watch now takes on a slightly more sophisticated design with a polished yellow gold bezel, crown, and center links.  Yellow gold also adorns the lacquered dial with gold-trimmed hour markers and gold hands.  It also features the downsized 36mm case size and calibre 3230 perpetual movement.

The Explorer now joins the ranks of other tool watches that have taken the leap to two-tone over the past several decades, including the GMT Master II, Submariner, Daytona, and, more recently, the Sea-Dweller. 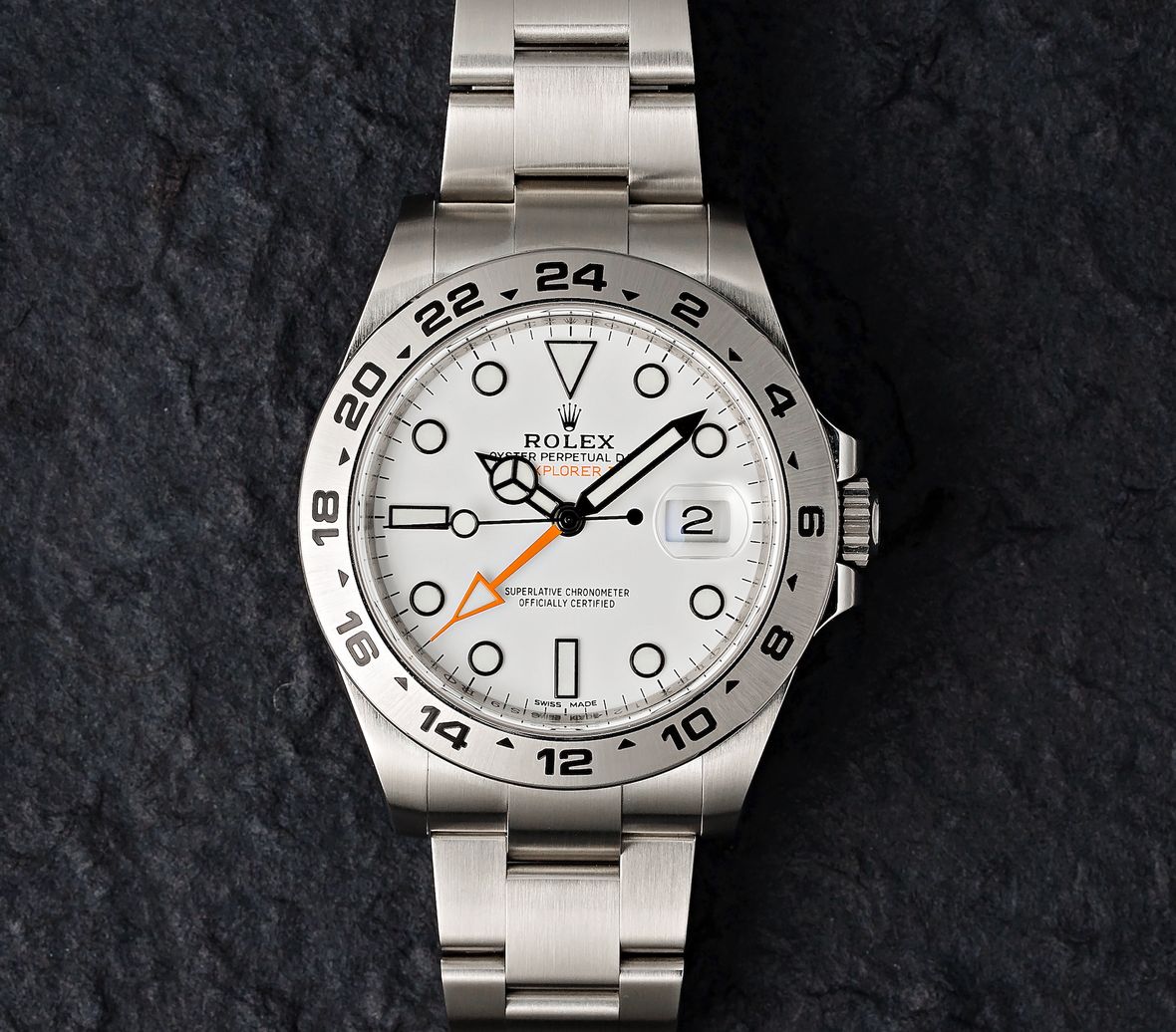 While the Explorer was developed for mountaineering and other rugged terrains, the Explorer II’s niche lies in spelunking and other dark environment adventures where the wearer might not see daylight for days at a time. Its signature feature includes a fixed 24-hour bezel and coordinating arrow hand on the dial, which can be used to track AM and PM hours.  If the Explorer II is a newer model, the arrow hand is also independent, virtually turning it into a GMT watch that can track a second-time zone.

The collection has undergone a few notable transformations since its release in 1971, including the upgrade to the independent arrow hand via ref. 16550 in 1985, the addition of sapphire crystal over the dial, various movement upgrades, and the option of either a black or white dial. It remained 40mm in diameter until reference 216570 hit the market ten years ago with a 42mm case and the return of the bright orange arrow hand last seen on the inaugural Explorer II ref. 1655 from the 1970s.

That brings us to the 2021 reference 226570, which comes to market just in time to celebrate the Explorer II’s 50th anniversary.  It keeps several of the upgrades mentioned above, including the 42mm case, the option of either a white or black dial, and bold orange arrow hand on the dial.  Only now, the case has been refined to feature slimmer and less chunky lugs, which we suspect might affect the overall fit of the watch.  However, that remains to be known until we can get our hands on the watch itself.  The newer lug design doesn’t come as much of a surprise as Rolex seems to implement a more slimmed-down profile into many of their newer releases.

The Polar dial, while a fixture of the Explorer II collection now, is a relatively new addition to the Rolex catalog.  It debuted in 1985 via ref. 16550 featuring matte black hands and matching applied hour markers.  42mm reference 216570 replaced the original Polar Explorer, featuring glossier black hands and hour markers.  While slightly more contemporary in design, avid collectors weren’t too keen on the black glossy finish.  The brand-new 2021 Explorer II returns to the original Polar dial design with matte black surrounds and hands.

Many will be surprised to learn that with the decrease in case size for the Oystersteel Explorer ref. 124270 comes a slight price decrease to $6,450.  That’s a very appealing price point for anyone shopping for an introductory Rolex tool watch.  The steel and yellow gold Explorer ref. 124273 hit the market today at $10,800, while the new Explorer II ref. 226570 retails for $8,550.