It’s no secret that watch enthusiasts often regard quartz watches as less desirable than mechanical ones. Since quartz watches are less expensive and faster to produce than their mechanical counterparts, it’s easy to jump on the bandwagon that decries them as not worthy of any meaningful attention.

However, what’s often lost in this narrative is that when quartz movements made their debut as a viable option in the late-1960s, they were seen as ultra-high-tech, desirable, and downright revolutionary. It’s hard to imagine now, but early quartz offerings like the inaugural Seiko Aston (the world’s first quartz wristwatch) and the Hamilton Pulsar (the world’s first digital watch) were fashioned from solid gold and cost a small fortune. High-end Swiss watchmakers such as Omega had to follow suit to keep up and began offering luxurious watches powered by quartz too. 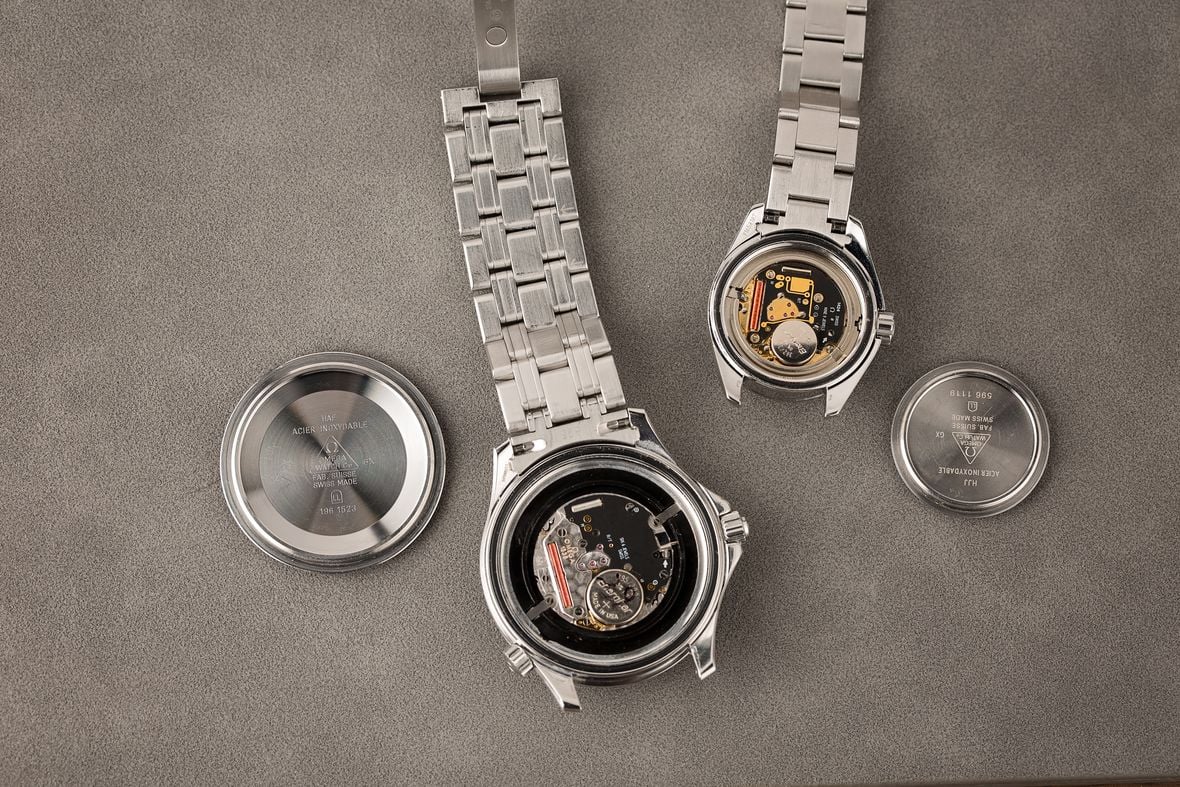 In a clever move, Omega embraced the arrival of quartz and offered many battery-powered models during the so-called Quartz Crisis. As a result, Omega came out on the other side – which is more than can be said for plenty of other Swiss watch brands during that period.

Nowadays, the cost to own a quartz watch may start as low as the same price as a cup of coffee but it can also skyrocket to the equivalent of a down payment to buy a new house. To say that quartz watches are cheap is simply not true. Plus, quartz movements offer a host of advantages over mechanical movements including better accuracy, slimmer profiles, greater durability, and more practicality. Omega continues to produce a diverse range of quartz watches today. Omega watches with quartz movements come in many forms with varying degrees of functionality – and here are some of our favorites.

Click here for our Ultimate Buying Guide on Omega Watches. 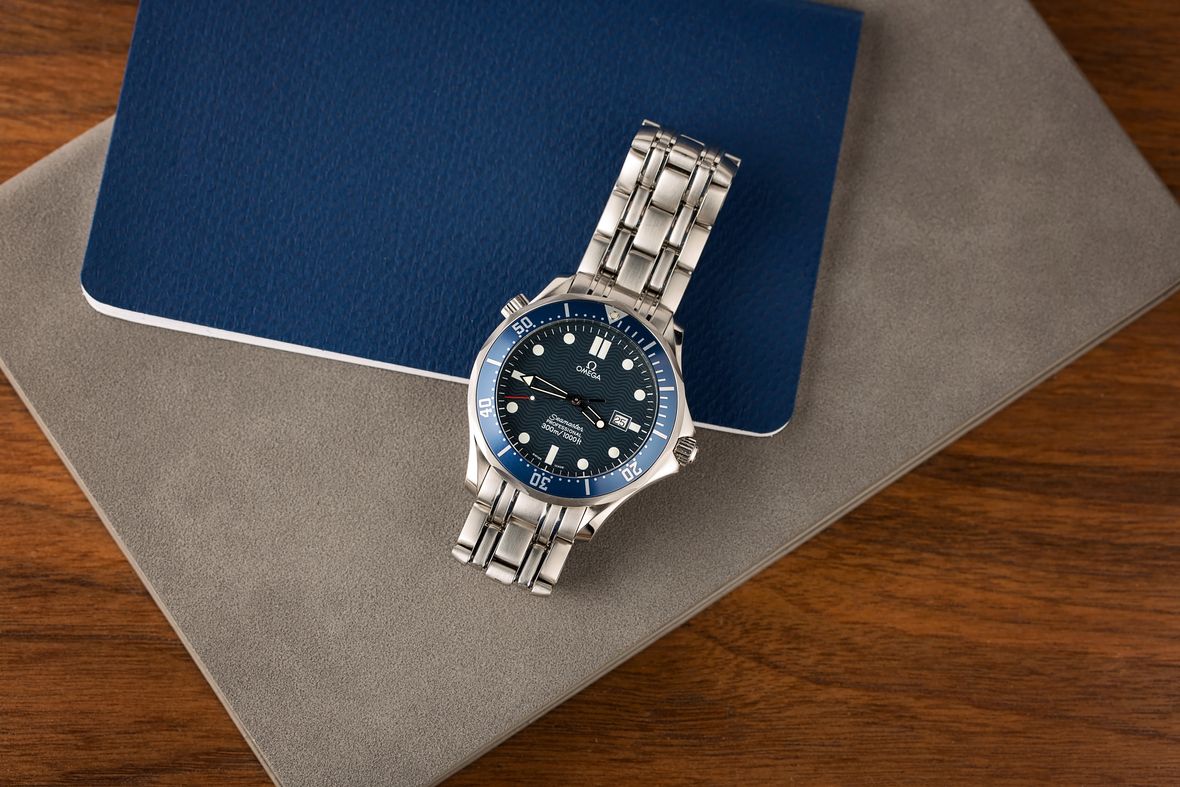 In 1993, Omega debuted the Seamaster Professional Diver (now better known as the Seamaster Diver 300M,) positioned as a refined and luxurious dive watch for the modern era. Two years later, the watch gained worldwide acclaim when Pierce Brosnan wore it while playing James Bond in the film GoldenEye. This was Omega’s first appearance as James Bond’s official watch – a partnership that remains today. 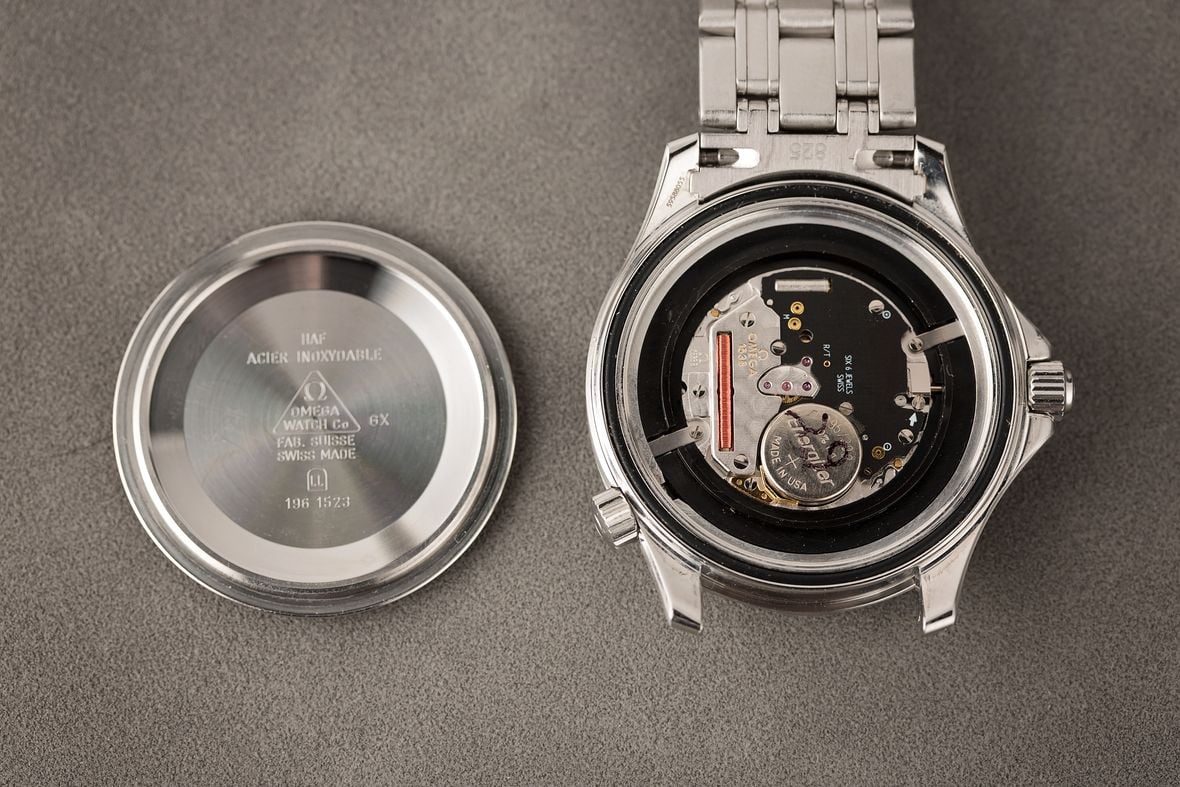 The blue dial design is especially striking thanks to its now-iconic wave pattern, oversized and skeletonized sword hands, and luminous rectangular and round indexes. Completing the look of this dressy Omega diver is the “James Bond” style Seamaster five-link bracelet in steel, featuring a mix of brushed and polished finishes.

Inside the GoldenEye Seamaster is the Omega Caliber 1538 quartz movement with a battery life of 42 months and an End of Life (EOL) indicator. When the second’s hand jumps in five-second increments, the watch is telling you that it needs a new battery. 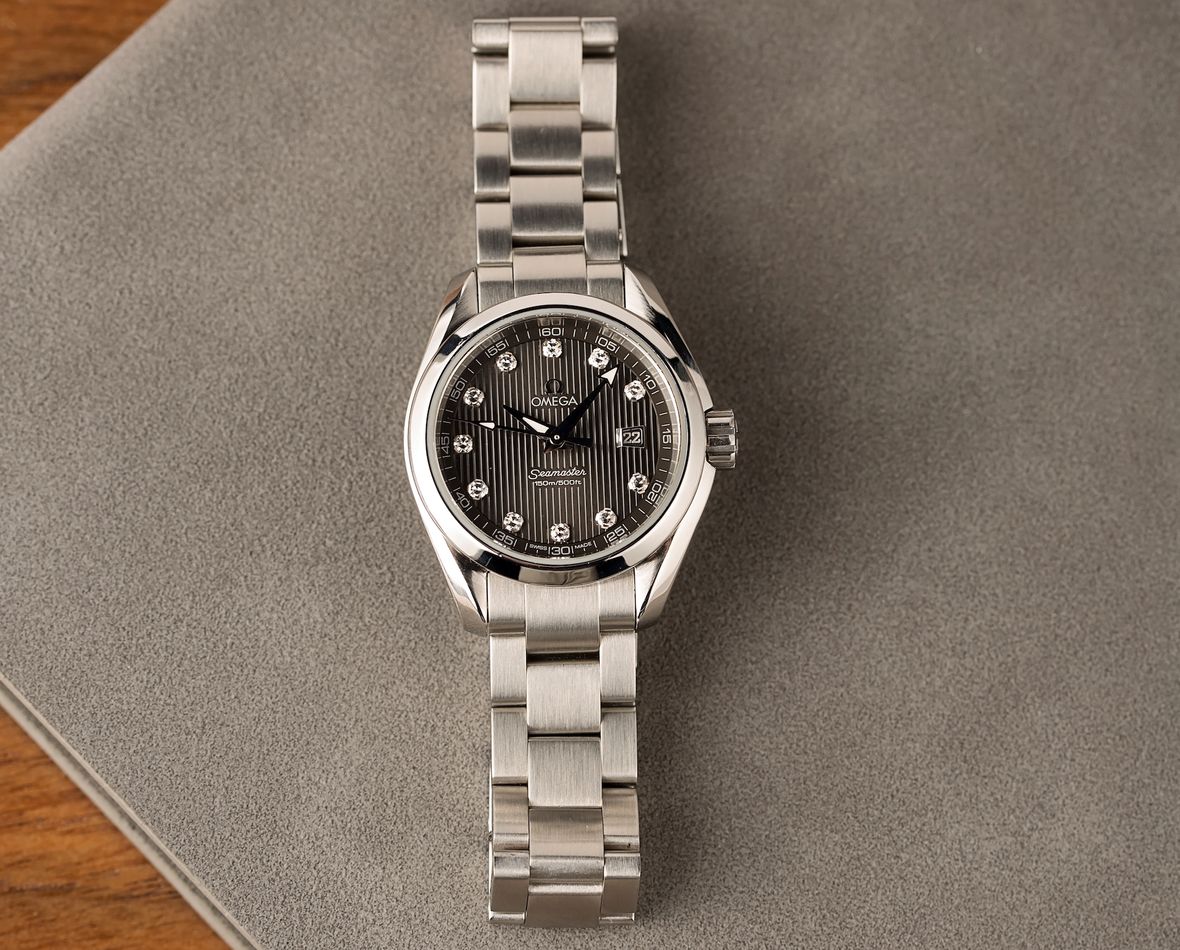 Omega released the Aqua Terra in 2002 as a collection of elegant sports watches, designed for daily wear and water-resistant to 150 meters. In less than two decades, the Aqua Terra has grown to become Omega’s most diverse collection with a vast assortment of sizes, materials, colors, and functions available. Plus, Omega has produced both automatic and quartz Aqua Terra models alongside each other.

With its 38.5mm steel case and matching steel bracelet, the Aqua Terra ref. 231.10.39.60.06.001 is a solid choice for a daily watch. To emphasize the nautical concept of the Aqua Terra, the watch houses a “teak concept” dial where the vertical stripes mimic the wooden decks found on yachts. At the center of the dial are the customary broad-arrow hands, which point to luminous tapered hour markers. At the 3 o’clock position is a discreet date window and there’s also a minute track running the periphery of the dial, complete with numerals at each 5-minute interval. Powering this quartz Aqua Terra is the Caliber 4564 with 25-month battery life. 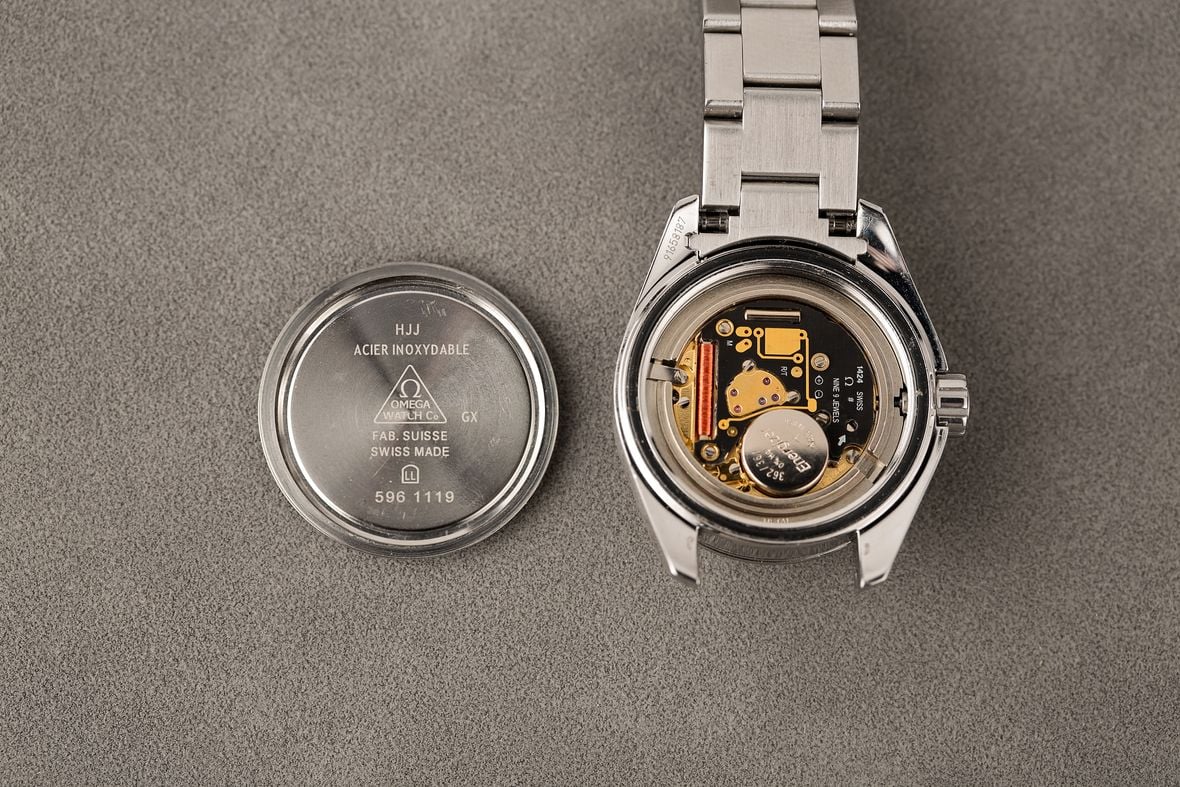 For a similarly styled but smaller option, there’s the Aqua Terra ref. 231.10.30.61.56.001. The watch includes a petite 30mm steel case, also topped with a smooth steel bezel and fitted with a matching steel bracelet. As a whole, its overall case design is very similar to its larger counterpart but scaled down to suit a smaller wrist.

Its gray striped dial benefits from the addition of 11 diamonds that serve as hour markers – leaving room at 3 o’clock for the asymmetric date window. This gem-set quartz Omega Aqua Terra runs on the Caliber 1424 that offers users a respectable 32-month battery life. 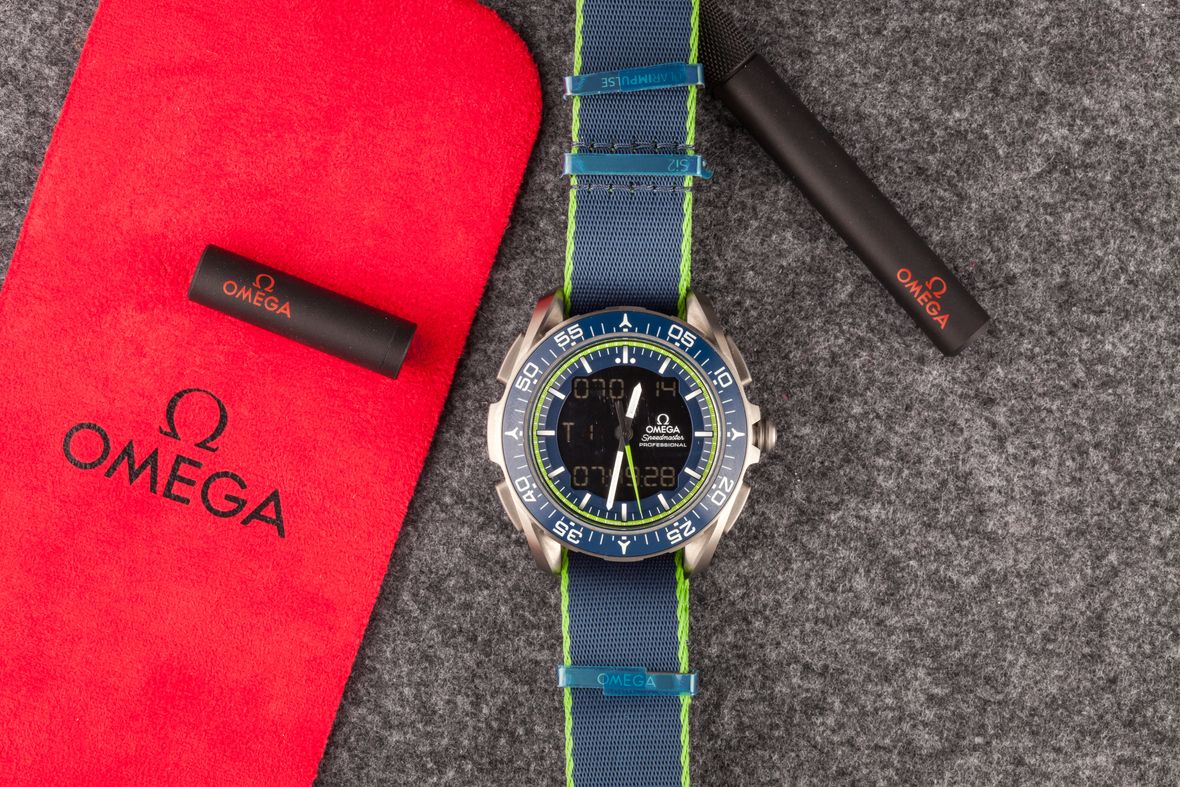 The Omega Speedmaster Skywalker X-33 Solar Impulse Limited Edition (1,924 examples) is a relatively new iteration, having been released in 2015. This particular version, ref. 318.92.45.79.03.001, was made in honor of the Solar Impulse Project – a venture dedicated to making long-range solar-powered aircraft.

Sporting a 45mm titanium case and plenty of colorful details, the Omega Skywalker X-33 makes a bold statement on the wrist. The dial, which is protected by a sapphire crystal, includes analog hands pointing to traditional 12-hour markers at the foreground and LCD windows in the background for the digital displays. The vibrant colorway continues with a blue bezel and a blue and green NATO-style strap.

The combination of iconic wristwatch designs paired with ultra-precise Swiss-made quartz calibers is a practice that Omega has been perfecting for five decades. Not only does the brand still produce luxury watches powered by quartz movements, but quartz Omega watches are the go-to timepieces for today’s astronauts.

They may not receive as much attention as their mechanical counterparts, but quartz Omega watches are definitely worth a second look. When it comes to luxurious yet practical watches, Omega quartz timepieces are some of the best ever made. 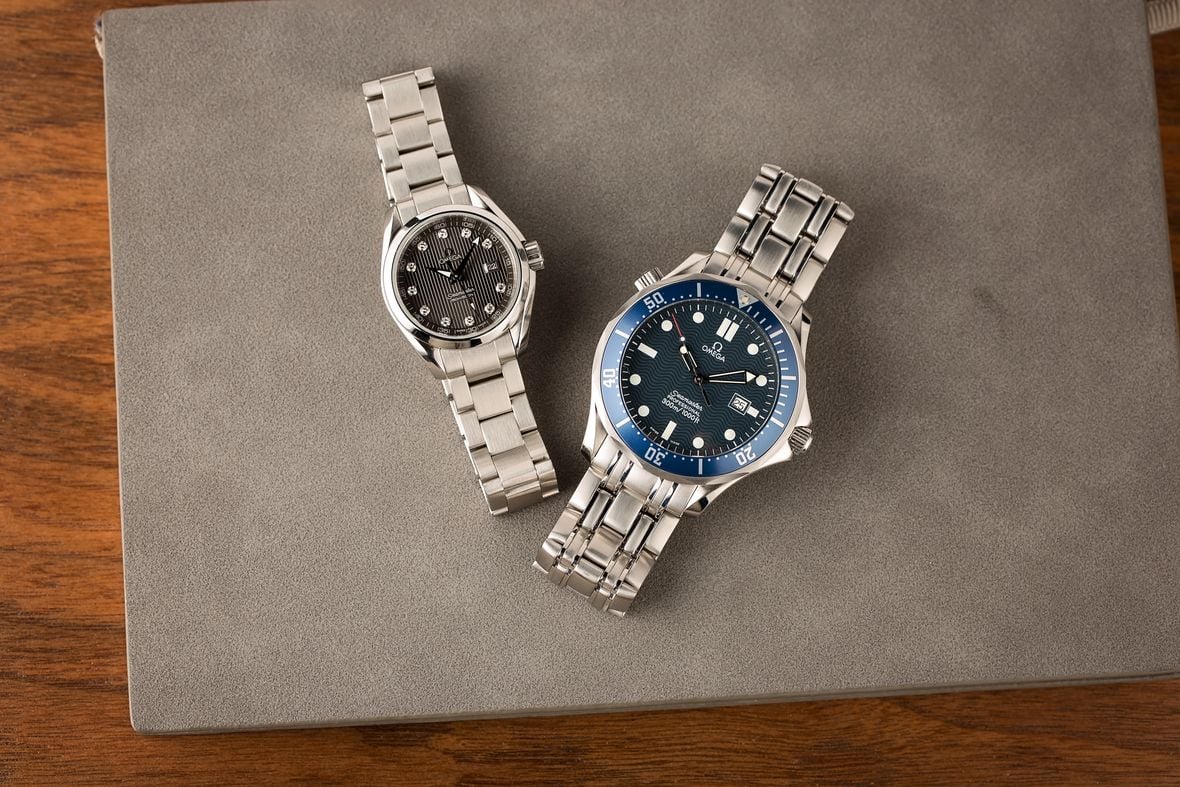