They are two of the longest-established names in the entire Rolex catalog, and both are studies in elegant, stark minimalism. In terms of heritage, one was released to commemorate the first successful ascent of Everest; the other was actually worn on the summit.

In recent years, comparing the Rolex Explorer against the Oyster Perpetual is a bit like comparing apples and…another very similar apple that costs a tiny bit more. If you only see photos of the two together, you could almost be playing one of those ‘Spot the Difference’ puzzles you used to get as kids, but in the flesh, the two actually have some important distinctions.

Below, we take a look at these two classic time-only Rolex watches in a bit more detail.

The History of the Rolex Explorer and Oyster Perpetual 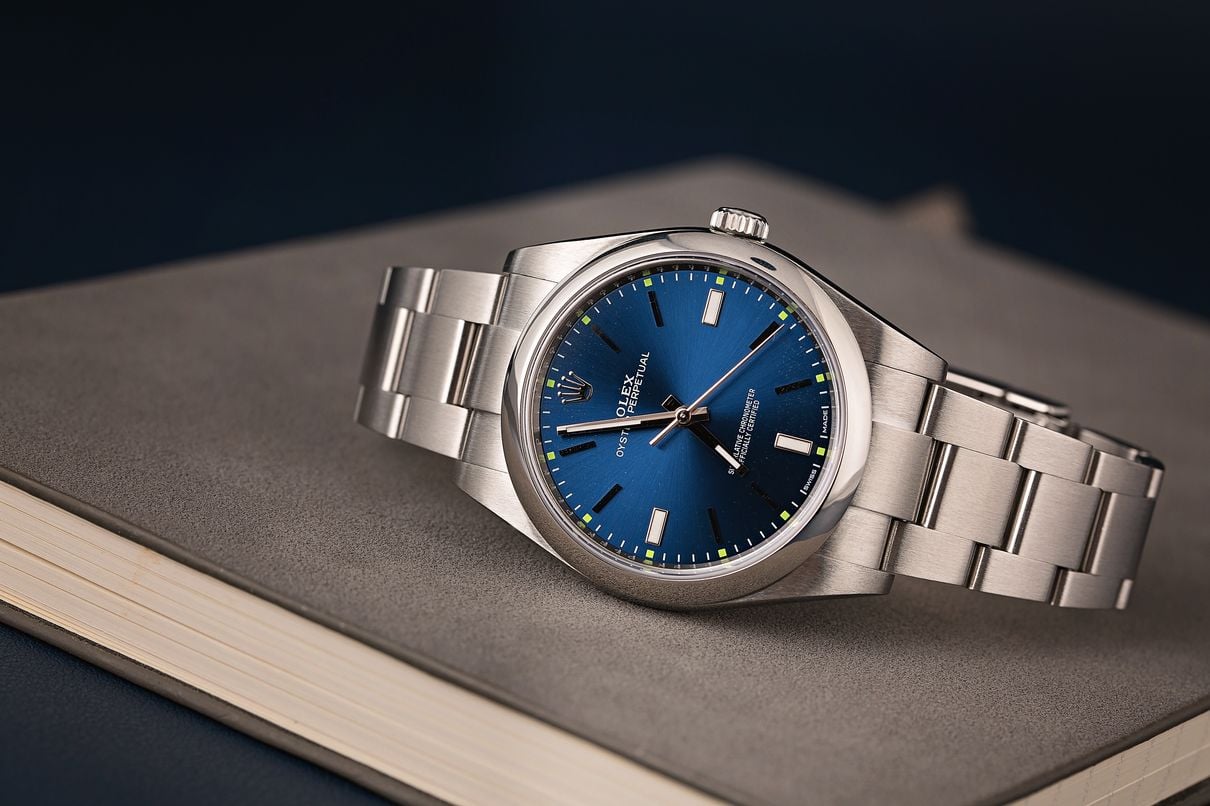 That also applies to the Rolex Explorer of course. First released in 1953 to celebrate Hillary and Norgay’s historic Everest feat, it too has mostly been a humble time-only model, with only the briefest foray into date complications during in its very earliest days. Unlike the Oyster Perpetual though, it has always been a take-it-or-leave-it kind of watch, with no choices when it comes to dial colors, metals, bezels, or hour markers. You could have it in steel, with a black face and those iconic 3/6/9 indexes, or you couldn’t have it at all.

By contrast, the Oyster Perpetual has constantly presented a wide array of different options throughout its run. There have been solid gold and Rolesor versions, an extensive variation in dial and bezel combinations, and sizes ranging from ladies 24mm pieces all the way up to the 39mm case of the largest model in the contemporary collection. So while their general styling and features may be similar, the Explorer is the tool watch of the two, with the Oyster Perpetual offering far more versatility and very much part of the dress models.

For most of its life, the Explorer has been solely a 36mm watch. There were a few examples in the early days where it shared a 34mm case with the Air-King, but these were particularly small even for their era.

However, in 2010, Rolex decided they couldn’t ignore the calls to increase the sizes of some of their pieces any longer, and the Explorer ref. 214270 was released, now sporting a 39mm diameter. By modern standards, that is still not especially large, but it hits a nice sweet spot for the model; more wrist presence, while retaining the Explorer’s typically understated, studiedly non-flashy temperament.

Five years later and the Oyster Perpetual followed suit, borrowing the Explorer’s housing to add a 39mm option to the range, making it available in a total of five different sizes, including 26mm (the smallest watch Rolex currently offers), 31mm, 34mm, and the traditional 36mm – with 904L stainless steel now the only metal option available.

Those original larger Oyster Perpetual watches came with a selection of dials in colors such as sunburst blue, rhodium grey, and red grape. In 2018, the 39mm series gained a black and a white model, both of which have been very well received, but the former of which appears extremely similar to the modern-day Explorer at first glance. In reality, put an Oyster Perpetual next to a contemporary Explorer and there are enough differences to draw the eye.

The Oyster Perpetual has a less busy look overall, its hour markers simple batons along with plain stick hands. Again, the finish is a subtle sunburst effect, which ties in with its dressier credentials. On the other hand, the dial on the Explorer is black with Mercedes hands, and of course, those Arabic numerals at the cardinal points. (Just to be even more confusing, you can also get 3/6/9 dials on all but the 39mm version of the Oyster Perpetual, just none in black!)

The bracelets on each are the three-link Oyster, with the Explorer’s given the Easylink extension system and the extra security of the Oysterlock safety clasp. The Oyster Perpetual has just the Oysterclasp which, more than anything else, probably explains the slight discrepancy in price between the two watches.

On the whole, the Explorer looks just a little more sporty, perhaps just a touch bolder than the Oyster Perpetual. The less ornate dial and the large Arabic numerals actually have a much bigger visual effect than you would imagine, and contribute to making the pair of watches quite distinct from one another.

What Watch to Buy?

The two watches actually fit into the second tier of Rolex’s catalog, getting somewhat forgotten amongst the various Submariner, Daytona, and President watches of the world. Nevertheless, they both epitomize the original spirit of the brand, the one that set out to create something that told would simply tell you the time, wherever you were and whatever you were doing, and would carry on ticking long after you were gone.

The one you choose comes down to preference (obviously), with the Oyster Perpetual offering far more in the way of variety where sizes and colors are concerned, while the Explorer remains a no-nonsense tool watch – something of a rarity at Rolex these days.

Personally, I’ve always had a special fondness for the Explorer. I love its story, its unfussiness, and its feeling of total resilience. And if the 39mm is too big for my weedy little arms, I don’t have to dive too far back into the archives for a 36mm version. The ref. 114270 ran from about 2001 to 2010 and is almost a carbon copy of the latest model, bar a few millimeters in size. Then, if I fancy a real classic, the long-running ref. 1016 is a vintage Rolex beauty whose time has come recently, with it finally getting the appreciation it deserves – just still with realistic prices.

The Oyster Perpetual is a fine piece, the perfect choice for those beginning their journey into Rolex ownership and for those who want something with ultimate flexibility. There is a size, dial color, and detailing to suit anybody, and it is one of the best value for money prospects in the portfolio. Either watch is an excellent purchase, accepted anywhere and, whether you go for brand new or vintage, make superb additions to the collection.