The Rolex Submariner 5513 is the quintessential vintage Rolex dive watch and a top choice for serious collectors around the world. First created in the 1960s as a precision timing tool for professional scuba divers, the reference 5513 Rolex Submariner has become a sought-after and coveted vintage Rolex model, due to its classic style and durable purpose-built design. As these watches were originally viewed as reliable underwater tools, many of the surviving examples of reference 5513 watches are accompanied by remarkable stories, often tied to scientific or military use.

In this exclusive video from Bob’s watches, we’re going to take a closer look at a very special ref. 5513 Rolex Submariner that belonged to a professional U.S. Navy diver named Raymond. We are going to talk a little bit about the different features of the Submariner 5513 and discover what makes it the perfect timepiece for professional divers around the globe like Raymond.

When Raymond became a 2nd class Navy diver in 1968, graduating first in class from dive school in the Philippines – he purchased a Rolex Submariner watch: a reference 5513. Raymond had chosen to become a diver with the Navy because it paid approximately 50% more than the average salary, and the additional income would allow him to pay off his student loans more quickly. In the late 1960s, the sport of scuba diving was still in its formative years, and having a reliable way to keep time underwater was an absolute must for any professional diver. Additionally, Raymond’s role as a Quartermaster with the Navy involved a high degree of navigational proficiency, and having a high-precision watch meant that he could be more accurate with his various navigation calculations. 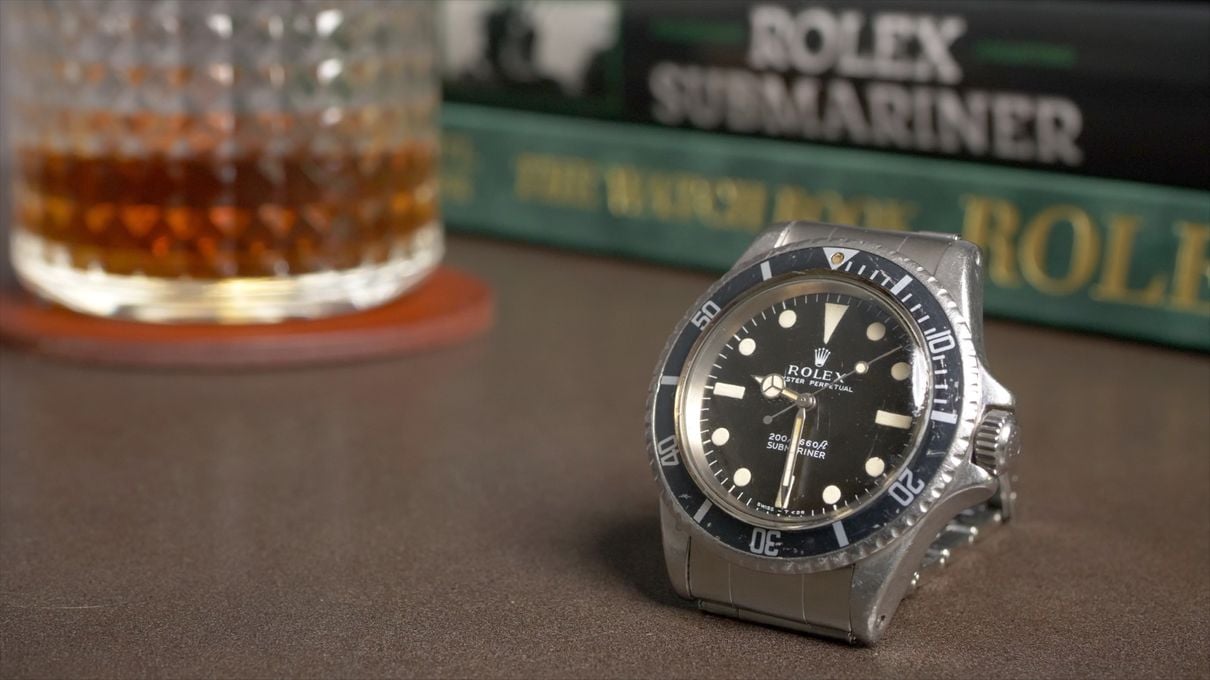 Raymond purchased his Rolex Submariner ref. 5513 from the Navy base in the Philippines. Slightly more expensive than other watches on offer at the time (including a Doxa with an orange dial and an Omega Seamaster dive watch), Raymond chose the Rolex Submariner due to the reputation that Rolex watches had for being highly accurate timekeepers. Raymond once tested the accuracy of his Submariner, and despite it not being fitted with a chronometer-certified movement, his reference 5513 only lost 2 seconds per month, which is well-within the timekeeping parameters established for chronometer accuracy by the COSC. Equipped with an easy-to-use rotating timing bezel, crown guards, and a highly-legible dial, the ref. 5513 Submariner was a perfect timekeeping tool for Raymond to use while diving deep below the surface of the ocean.

After attending 1st class diving school in Washington DC, where he graduated 2nd in his class, Raymond continued exploring the deep while diving in the North Sea with his Rolex Submariner 5513 strapped to his wrist. During 1st class diving school, Raymond learned mixed gas diving and underwater demolitions, which he would go on to do all over the globe during his incredible and storied career. His remarkable life would lead him to dive all around the world (approximately 30-40 different countries), from the west coast of the United States in San Diego and Washington, to Vietnam, Guam, and the Philippines – just to name a few. 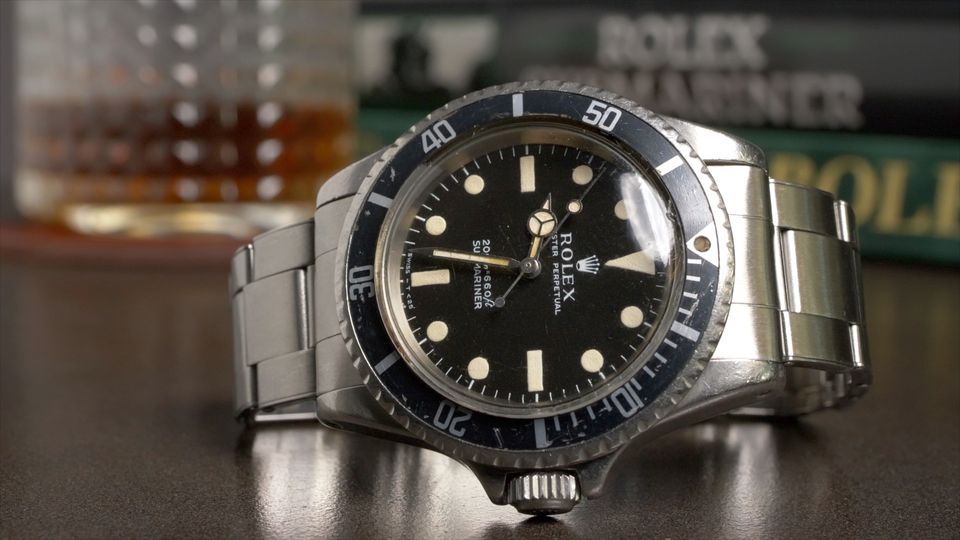 The reference 5513 was the last Rolex Submariner to feature an acrylic crystal.

As a professional diver, Raymond owned 3 different Rolex watches. His first reference 5513 Rolex Submariner was stolen at knifepoint; however, he quickly replaced it with another ref. 5513 as the watch was an essential piece of equipment for his duties as a diver for the Navy. That second Rolex Submariner 5513 stayed with him throughout his entire career as a professional diver and is the exact same watch that we have featured in our video today.

During his time deep-sea diving with mixed gases in the North Sea, the unique demands of saturation diving caused Raymond to pick up a second Rolex dive watch – a reference 1665 Sea-Dweller. When saturation diving, divers spend extended periods of time in dry pressurized chambers, where they breathe a special mixture of gas in which some of the nitrogen is replaced by helium. Due to the extended periods of time spent at extremely high pressures, tiny helium molecules get squeezed past the gaskets of traditional dive watches and get trapped inside the case. During decompression, the trapped helium expands, creating a pressure that risks blowing traditionally mounted crystals clear off their watches.

The Rolex Sea-Dweller was specifically developed to contend with the unique challenges of saturation diving and became Raymond’s go-to dive watch for all of his various deep-sea diving missions. Despite having a ref. 1665 Sea-Dweller, Raymond held onto his Submariner 5513 during all of his years as a professional diver. After retiring from diving, Raymond passed his Sea-Dweller on to a family member, choosing to keep his trusty Submariner, until he gave it to his son, who later (with Raymond’s blessing) sold it to us. 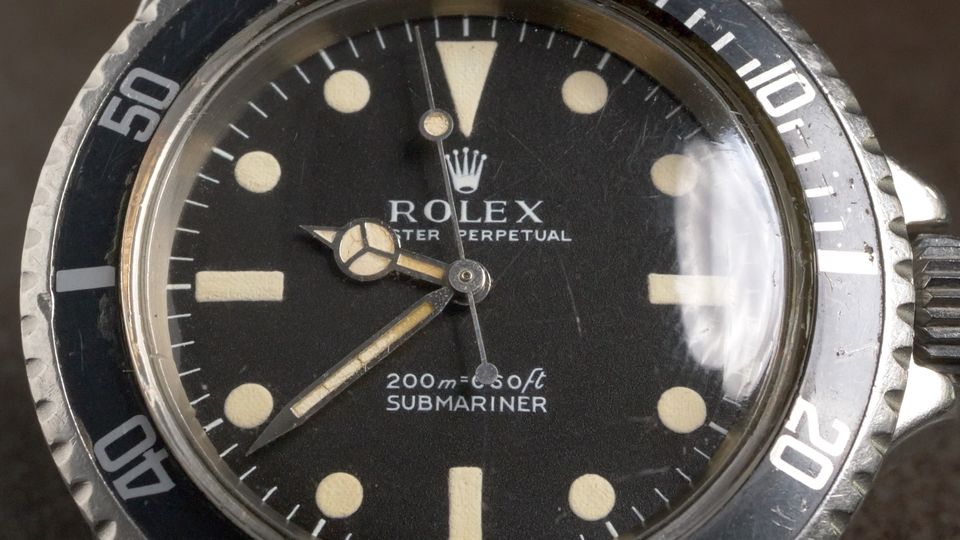 Rolex first introduced the reference 5513 Submariner in 1962, and the watch remained in production until approximately 1989. During this time, a number of changes and updates occurred, with many pertaining to just the dial. Between 1962 to 1966, the first Rolex Submariner 5513 models featured glossy gilt dials, which were later replaced by matte dials that remained in production from approximately 1966 to 1984. From 1984 until the end of production of the reference 5513 Submariner in 1989, Rolex switched to gloss dials with applied hour markers with white gold surrounds – similar to the style of dials that get fitted to the modern Submariner watches that Rolex manufactures today.

Raymond’s No-Date Rolex Submariner features an early “Meters First” matte black dial with tritium lume coated hands and indexes, protected by a robust stainless steel case and a thick domed acrylic crystal. Fitted with a stainless steel Oyster bracelet and a bi-directional rotating timing bezel with an aluminum insert, the Rolex Submariner 5513 has been a timepiece favored by professional divers like Raymond for its timeless design, legendary accuracy, and rock-solid durability. 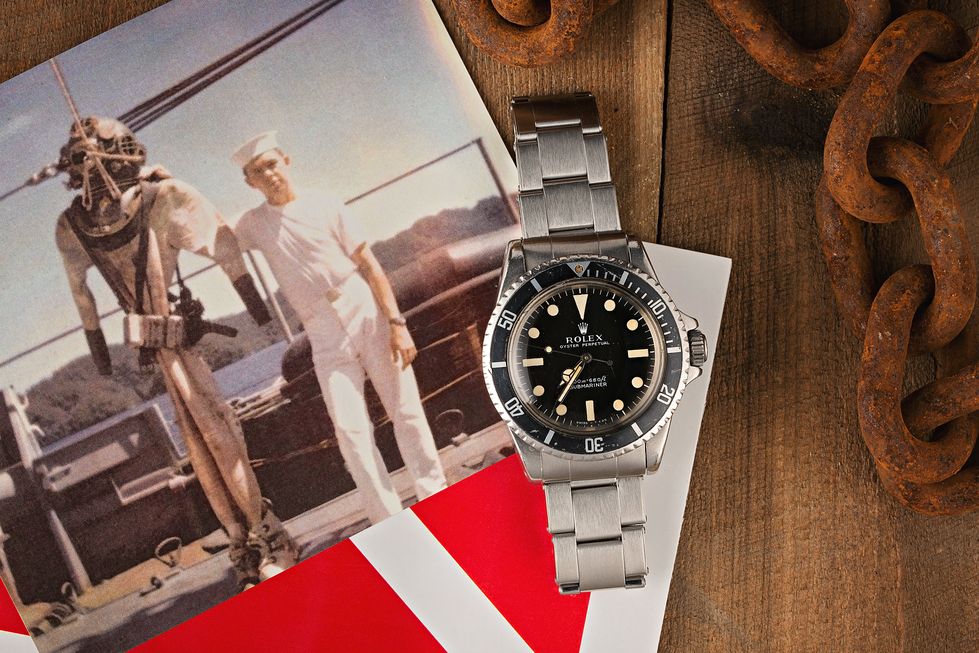 A photo of Ramond with his dive suit and Submariner from his days with the U.S. Navy.