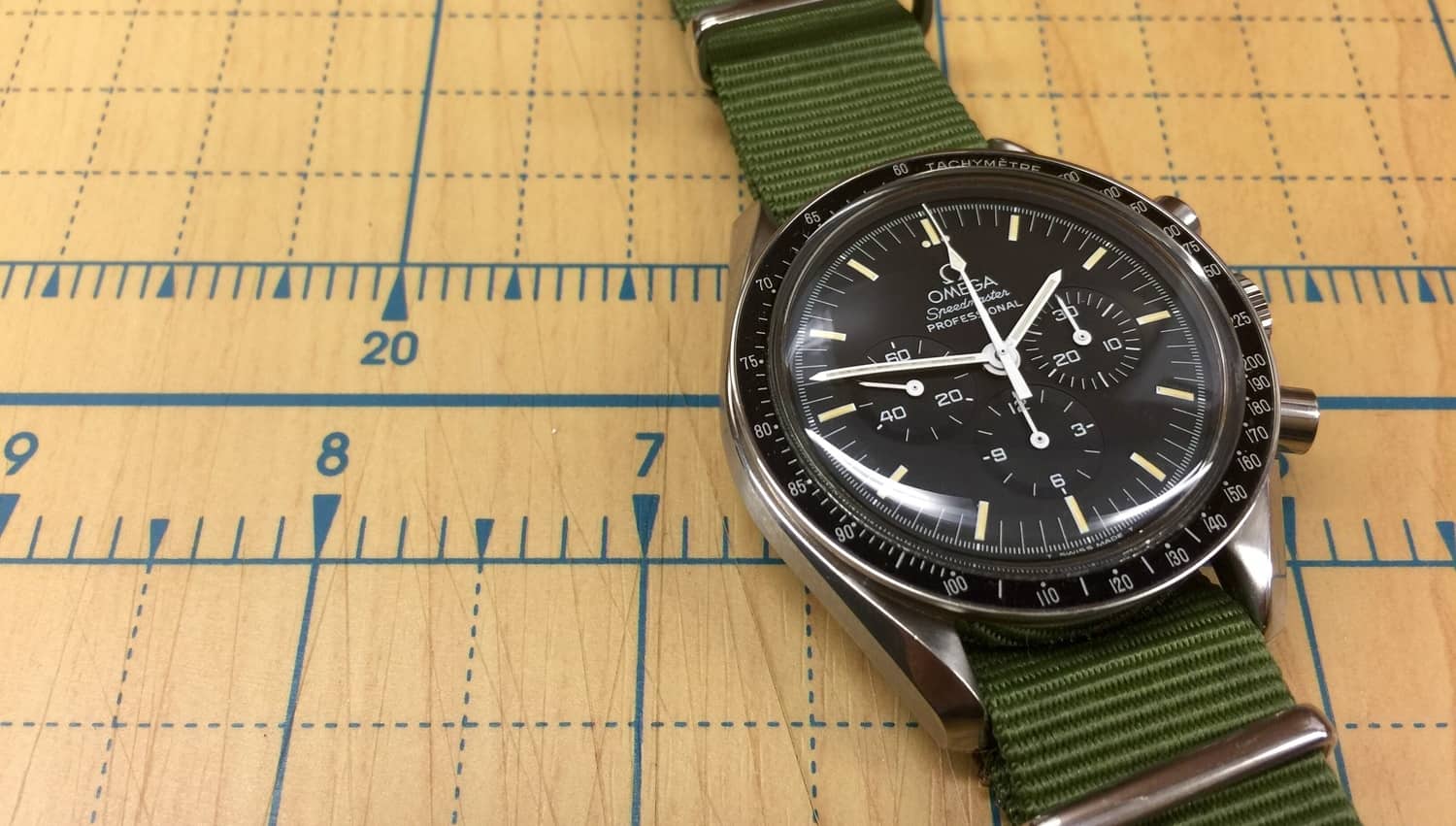 I’m going to share a dark secret of mine, that is both irrational and random, but has colored a lot of my watchmaking decisions. Ready?

When I first started getting into watches, I thought Omega was Seiko. I’ll let that sink in for a second. The fact is, for some bizarre reason, in my head I always assumed that Omega, which I knew next to nothing about, was a Japanese brand known for relatively inexpensive watches. Up until today, I had been unable to shake that prejudice off.

When you have a preconceived notion of a brand, especially when it comes to products that have a lot of prestige tied up in their name value, it’s hard to get away from it. So today I did something that will hopefully help me recover. I bought a vintage Omega Speedmaster Professional. And so far, I absolutely love it.

My journey to adding a Speedmaster to my collection started a few months ago, when I went to see the NASA Heavy Rocket IV space shuttle launch in Cape Canaveral. While walking around one of the NASA museums, I started to soak in some of the Omega history with the space program, and even stumbled across a 5 foot tall working Speedmaster in one of the halls (see below).

Having been moved by the majesty of a rocket launching while I sat by a swamp in a convertible Mustang, I knew I had a place in my life for the revered Speedmaster Pro.

Since I’m not as obsessive over the details as I might be about a vintage Rolex, and since far less money was on the line, I found a nice example offered by popular seller LunarOyster. Since I love the creamy look of tritium patina, I was looking for an 861 caliber piece, and ended up with a very minty, 1997 model, the last year of the tritium dial, with nice matching hands and dial plots.

Sometimes your realize that the most popular watches are popular for good reason. For a time before I got my first Submariner, I avoided it because ‘everyone had it’. Once I got one, I understood that there is a reason everyone had it. It was damn near perfect.

I feel a similar way so far about my Speedmaster. It is an amazing value for a swiss watch from a popular brand, full of fantastic details I’ll talk through now. The first thing that caught my attention as I turned the watch over in my hands, still cold from the FedEx box, were the lugs. They have several different polishes, from mirror finish to matte, and play with the light in a very cool way. They also seem to hug whatever strap they are on, as they appear to curve inward slightly, making the watch look terrific on leather straps or a NATO.

After I spent some time examining the lugs, the Hesalite crystal, rising proudly above the case was the next thing I focused on. It is very clear and warps the hands and dial at certain angles. The center looks like it is slightly concave through the middle of the crystal, with a very unique reflection when viewed from the side. While it does sometimes reflect a little too much light, overall the visibility was excellent and I like turning it sideways and watching the crystal act like a funhouse mirror across the features on the dial.

The power reserve of the Speedmaster is rated at 48 hours, so winding it every morning 10-20 turns is a nice ritual that connects you with the watch in a way you don’t get with an automatic. When you wind it fully, the crown stops you from winding it further. One small issue I have is that turning the crown is a little difficult due to both the tension, and the smallish crown itself which doesn’t stick out from the case very far. In addition, the chronograph pushers get in the way a little too. It feels like it takes 3-4x as much force to move versus a Submariner crown, and has a clicking sound instead of a whirring sound. This is by no means a major issue, but something to be aware of.

One of the biggest features of the watch is the chronograph which can measure up to 12 hours. I use the chronograph, or a timing bezel, daily for timing medications and other small things, so it was important to me that it worked well. The pushers have an excellent feel to them, and have a satisfying *click* whenever I use them. I should also mention the chronograph is very easy to read at a glance and the large seconds hand has a very cool look to it. My seconds hand when reset is just barely off-center, which does bother me slightly, but I figure once I take it in for service they can readjust that.

All that said, the fact that you can get an excellent swiss complication like this chronograph is a tremendous value, and unlike a Daytona, doesn’t clutter the dial at all. When you aren’t using it, it fades to the background, and when you are, it is very readable. I feel that the sunken sub-dials lend to this effect nicely and it is a terrific design decision.

Overall legibility of the watch is one of its strongest suits, and I’m very particular about wanting to be able to tell the time quickly and easily. The white hands stand stark against the black dial and they are very long, for easy reading.

You also get a Tachymeter with this watch. Basically, a Tachymeter lets you calculate how fast you are going if you know that you have traveled exactly one mile. The idea is that you start the chronograph, and begin moving at the same time. If the seconds hand travels exactly one minute when you have traveled exactly one mile, it would point to 60, so you are going 60 Miles Per Hour. However if it takes you ten seconds to go a mile, the seconds hand would be pointing at 350, and you are somehow going 350 Miles Per Hour. Its a neat feature which gives the watch a very unique tool feel. Its easy to imagine you are an astronaut calculating an approach, and simply looks great. The numbers are small and silver colored, so they aren’t a visual distraction. Of note, if you want to get into collecting Speedmasters, there are several bezel variations to be aware of.

Finally, I’d like to talk about the size and comfort of the Speedmaster. At 42mm, it has great wrist presence even on larger wrists, but isn’t comically big and doesn’t look large from afar. The thin bezel allows the face to feel much larger than a similar Rolex and aids in readability and general wrist presence. The back of the case is comfortable and the slightly curved down lugs hug the wrist nicely and keep the watch in place. On a bracelet the balance is very even and on a strap or NATO you can feel the weight of the watch head, but rarely notice it. Definitely in the sweet spot of comfort, wrist presence and weight.

It is no surprise then, that the Omega Speedmaster has grabbed me like it has captivated millions before. It is one of the most popular luxury watches ever made, and is said to be a staple in any watch lover’s collection. Although the movement of the older models isn’t fully in-house, but based on a Lemania movement, it has proven to be a highly reliable watch and chronograph for nearly 40 years and is a classic in its own right.

The amount of watch you can get by buying a slightly older Speedmaster is easily the best bargain in fine watches today. The versatility, function and look are second to none, and it is already giving my new and vintage Rolexes a serious run for their money at more than half the price. You can wear this every day, and probably your whole life, and not need anything other than perhaps a dress watch for certain occasions. It is highly water resistant, and yes, was picked by NASA to adorn the astronauts while they went to and stood on the moon.

There is so much fun factor in the Speedmaster Pro: It doesn’t look overly serious, is mired in the fantasy of the space race and has a uniquely timeless look that is never out of place. Even though I walked into ownership with a weird notion of Omega, the Speedmaster has put a smile on my face every time I look down at it or use the chronograph, and the rest of my collection is going to have to hope that it can keep up. If you are looking to buy one excellent watch, this is without a doubt the one to get.