There is a good case for calling Panerai Radiomir the first true dive watch. Although it doesn’t bear much resemblance to watches from the genre as we know them today, the original model was created explicitly for the Regia Marina, the Royal Italian Navy, in 1936. Their newly formed unit of underwater commandoes, called the First Submarine Group Command, needed a timepiece which could withstand the harshest conditions and, crucially, be as legible as possible in the murky depths.

Panerai was therefore the perfect manufacturer for the commission, as they had developed, 20-years previously, a new, highly luminous compound far brighter, longer-lasting and with better underwater adhesion than anything else on the market. Conceived by Guido Panerai, grandson of founder Giovanni, the paste contained a mix of radium-226 and zinc sulfide and was already being used by the Navy to illuminate gun sights. In fact, Guido had named his invention after the Italian words for ‘Radium’ (Radio’) and ‘sight’ (‘mire’) to give us Radiomir.

Seeing no need to mess with a good description, the watch Panerai devised for the Navy also took the same name; a feat they repeated in 1955 when they came up with another, safer luminous substance; Luminor. 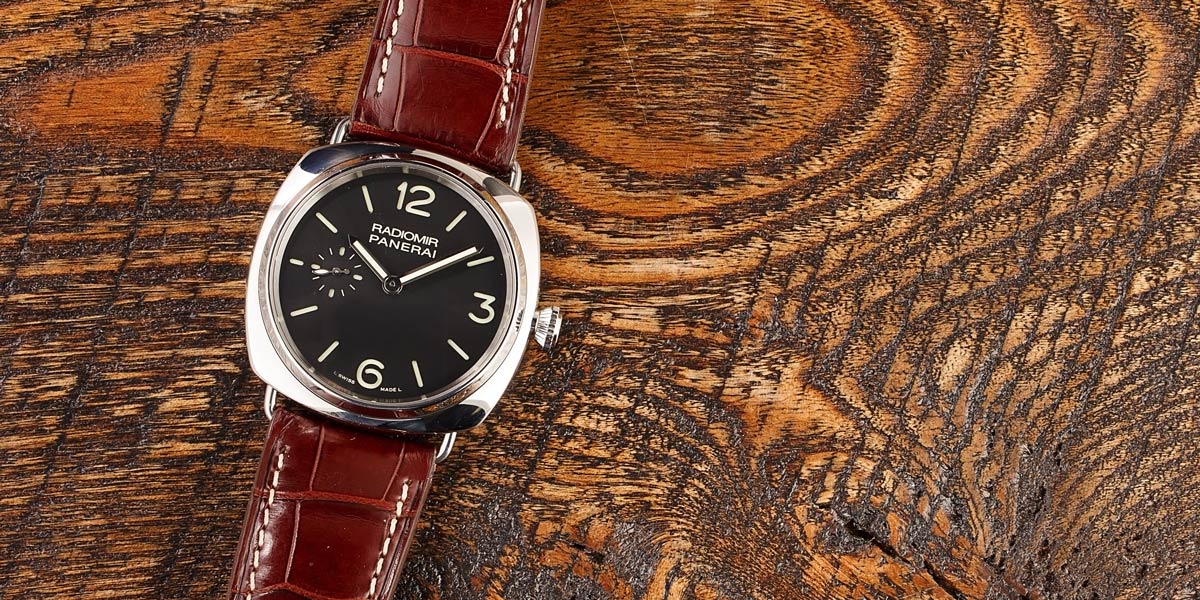 The first of the Radiomir models had much to thank another legendary watchmaker for. In their search for the toughest housings, capable of surviving plunges to great depths, Panerai naturally wound up knocking on Rolex’s door. Their invention of the waterproof Oyster case in the 1920s had transformed the image of the wristwatch completely, and Rolex were now able to supply Panerai with enormous 47mm steel versions with wire loops soldered top and bottom to hold a strap. These pieces, which would go on to be designated ref. 2533 when they went into production, were powered by the Cal. 618 – a large pocket watch movement, again supplied by Rolex, built for them by Cortebert.

Panerai’s contribution was the dial, a high contrast, minimalist affair without numerals, just small batons at the 3, 6 and 9, a double baton for the 12 and small dots for the rest. But with their patented lume painted on, the watch had an unsurpassed legibility in even the darkest conditions. A few years later and Panerai devised their now-famed Sandwich dials, consisting of two plates, one on top of the other, with the lower plate holding the luminous Radiomir paint and the upper one with the indexes stenciled out to let it shine through.

More upgrades followed, with the hour markers at the cardinal points replaced with huge Arabic numerals and long batons for the others, a design which is now archetypal Panerai. Rolex also improved on the cases, milling them from a single block of steel which incorporated the lugs for more strength. These examples became the ref. 6152/1.

Amazingly, considering their standing in the industry now, Panerai’s watches were only made commercially available outside Italy as recently as 1993. They were released to tap into the ’90s craze for timepieces with a strong military heritage and, thanks to the patronage of a certain Sylvester Stallone, went on to kick off a trend of their own; oversize watches.

The earliest releases from the brand for the civilian market stood out for both their rugged, bold looks and their formidable dimensions. They were aimed squarely at a male audience, with masculine, no-nonsense visuals and enormous cases in a then-unheard of 47mm, or even larger. They quickly picked up a strong and highly passionate fan base, dubbed the Paneristi, and carved out a niche position for themselves at horology’s top table.

However, as with all things, fashions come and go and huge, outsize watches would go on to lose some of their appeal. Rather than fight against it, Panerai did something once unthinkable; they reduced the size of some of their most iconic creations to become more versatile and all-encompassing. The Radiomir PAM 337 was one.

The Panerai Radiomir PAM 337 was unveiled in 2010 and received a very warm welcome from watch enthusiasts across the board.

Unlike the vast majority of Panerai’s offerings to date, which still hovered around the 45mm-48mm mark, this new Radiomir was the first in this design to be scaled down to a more modest 42mm.

Due to its flat construction and wire lugs, there was still ample presence on the wrist, though this update certainly opened up the doors to more collectors who previously found the model a touch too oversized. As an added bonus, the piece was also fitted with Panerai’s then-new in-house caliber; the hand-wound P.999 with a 60-hour power reserve. This movement also meant that Panerai was able to trim a little thickness from the case, which comes in at a very modest 11.7mm. Though a fairly casual-looking piece overall, it certainly has the right profile to tuck under a shirt cuff when called in for day-to-day office duty.

But, apart from the reduction in size, this is still very much a bona fide Radiomir. All the elements which made the larger examples so popular are still in evidence; the traditional tonneau-style case and conical crown, the small running seconds display at the nine o’clock, and the deep sandwich dial with its enormous numerals. No one will look at the watch and think it was anything other than a Panerai.

Sadly, the PAM 337 has since been discontinued. The current lineup has just two 42mm pieces, the PAM 01144 and the PAM 00655, neither of which have the classic old school wire lugs.

That means your only chance of getting your hands on one is to visit the preowned market. However, that may not be as easy as it sounds. Because the 337 was in production only briefly, they are a scarce presence and tracking one down will involve some in-depth searching. And, of course, as with all things luxury watch related, scarcity usually leads to price premiums.
For an excellent example, be prepared to pay anything up to $8,000.

The Panerai PAM337 was the first Radiomir model to be scaled down to a more all-inclusive size. Its popularity, coupled with its relative rareness on the market, have left it a highly desirable addition to any collection, whether you are a full-blooded Paneristi or not.

A beautiful watch, with plenty of watchmaking history behind it and dripping in the brand’s unique design language, it is a definite head turner.