2007 was the year Rolex proved that it could only be taunted so much by detractors for the lack of complications in its lineup before it would come out swinging. It has long been the anti-Rolex league’s favorite go-to criticism, holding up the Swiss giant’s catalog of ruggedly simple, almost minimalist, three-hand watches and sneeringly comparing them to the overtly functional pieces from the likes of Patek Philippe or Vacheron Constantin. Did Rolex lack the imagination to compete with the sky charts and moonphases of other watchmakers? Or was it the technical prowess it was missing? Rolex took it with its usual granite stoicism for decades, with the modesty of the Day-Date’s dual calendar or the Daytona’s chronograph seemingly as extravagant as it was prepared to go. Then, the iconic Swiss watch manufacturer released the Rolex Yacht-Master II series.

Vastly different from the original and less complex Yacht-Master, the Rolex Yacht-Master II is a vibrant behemoth that contains one of the most technically impressive complications ever made. As a product, it could also serve as the dictionary definition of the word “niche.” Powered by a new caliber that required more than 35,000 hours to devise, the result was a watch that’s sole purpose was to help yacht skippers coordinate the starting procedure of a sailing regatta. The first models of the collection were available in either yellow or white gold. Then In 2011, the Yacht-Master II ref. 116681 appeared, which is a striking Rolesor variant that blends tough 904L stainless steel with precious 18k Everose gold. If you’re into big watches that make a bold statement on the wrist, then keep reading for everything you need to know about the Rolex Yacht-Master II 116681 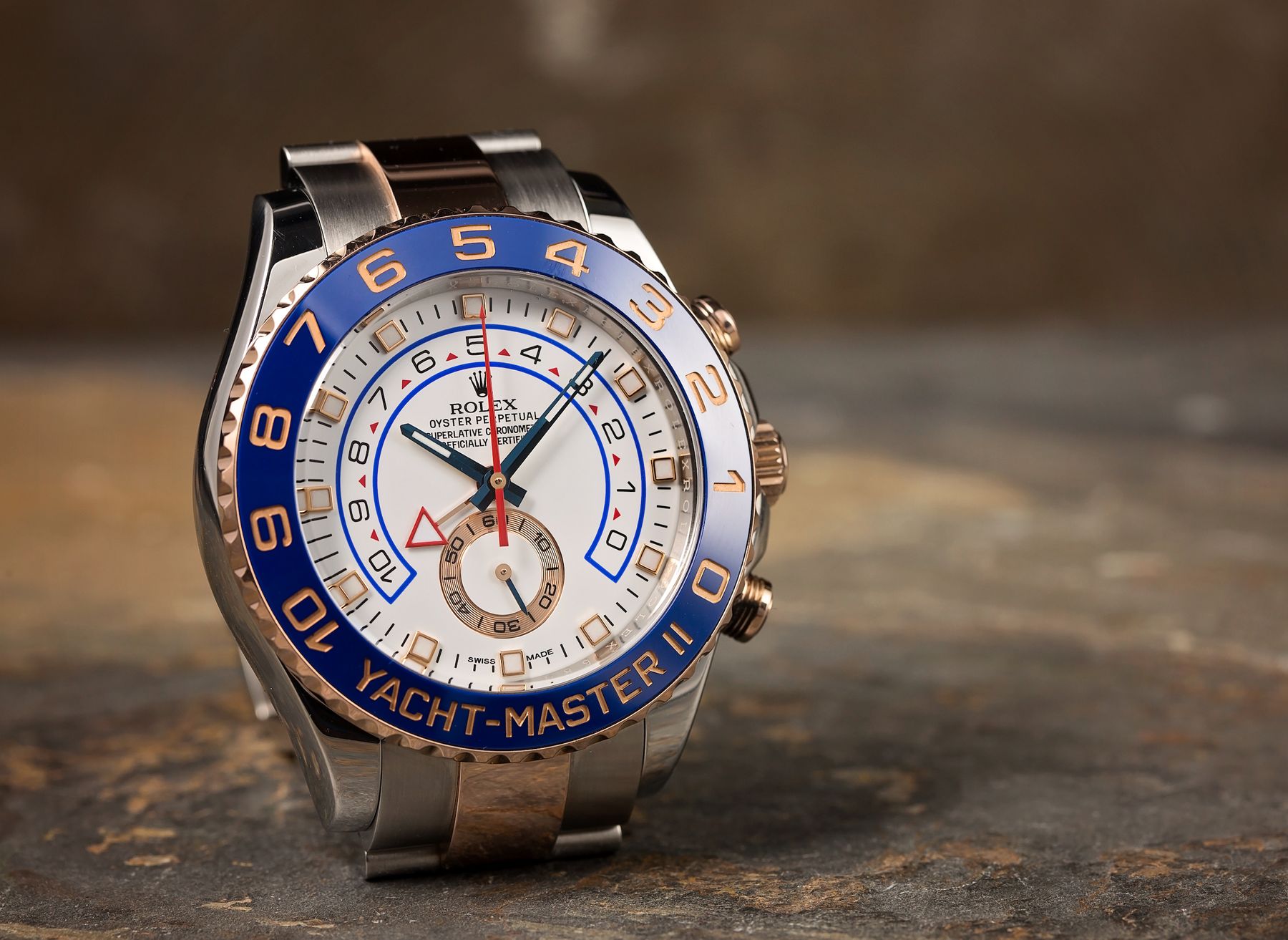 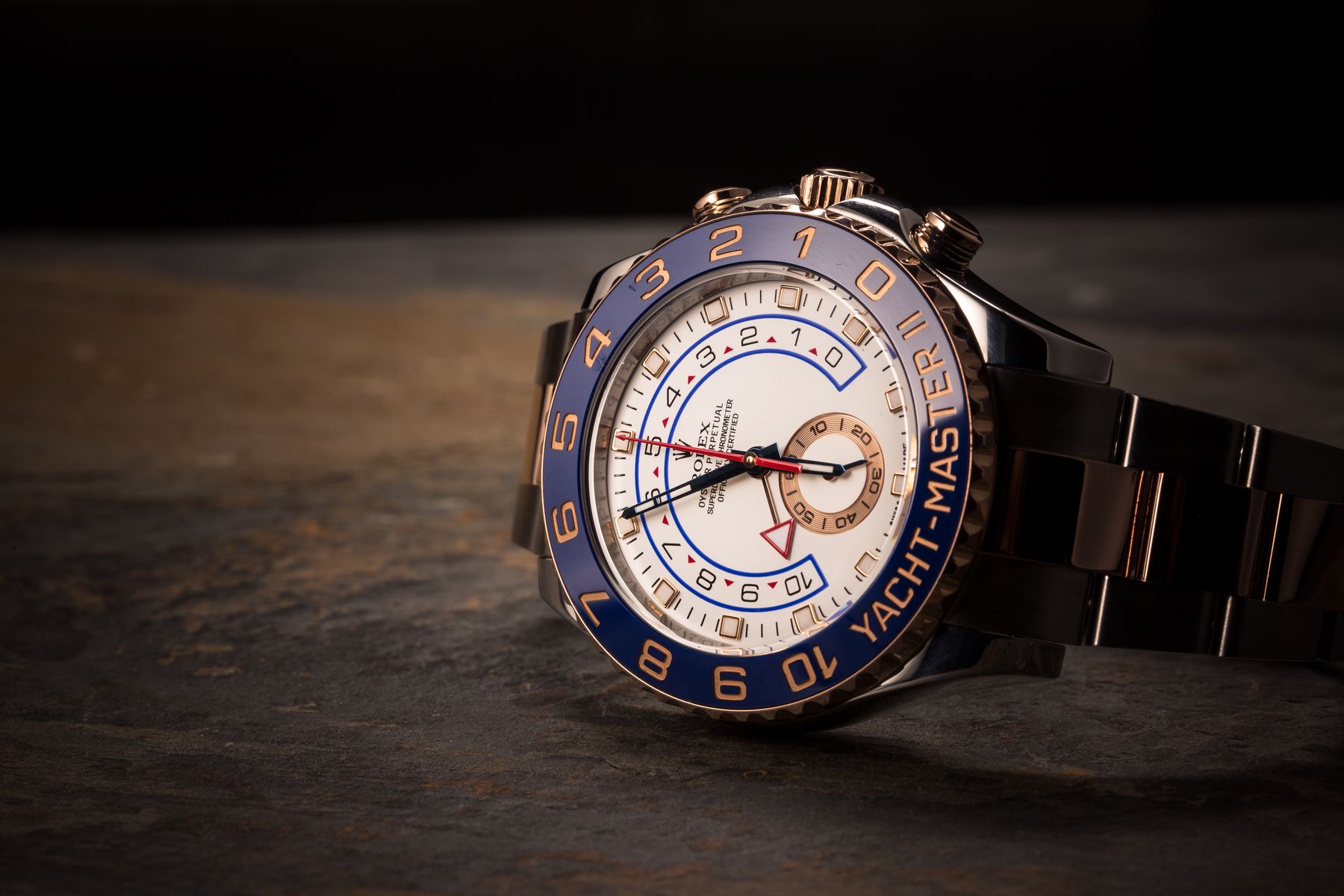 While the styles of the Yacht-Master II watches have split opinions and are a world away from the handsome elegance that has been the Rolex hallmark for over 100 years, this technical yet luxurious sports watch has won plenty of fans. Its concept and sheer audacity have also silenced many of the brand’s critics and Rolex has proved that, should it decide to mix it up in the world of complications, it can compete with the best of them.

As mentioned, the first two Rolex Yacht-Master II models that debuted in 2007 were in yellow gold (ref. 116688) and white gold (ref. 116689, which was discontinued in 2022). Five years later, Rolex unveiled the Yacht-Master II ref. 116681 as the two-tone Everose gold and stainless steel variant. The combination of the two metals, the bright blue bezel (crafted from Rolex’s ceramic alloy, Cerachrom), and the flashy dial is certainly not the subtlest of Rolex watches, but somehow, the Yacht-Master II 116681 just works.

The Everose gold elements – on the bezel numerals, crown, pushers, snailing around the seconds sub-dial, and center links of the sporty Oyster bracelet – soften some of the brashness of the all-steel or yellow gold versions. As a variant, it’s a definite eye-catcher. It has retained its rather graceful proportions, especially for such a large piece and one that crams in so much functionality. The 44mm case (the biggest case size in the Rolex fleet that’s only shared by the Deepsea) affords a large surface area for the dial designers to play with. And it’s just as well. There is a lot of information displayed on the watch’s face, but the logical placement of each element gives it legible readability.

At the top is a horseshoe-shaped track numbered to ten. The starting gun in a regatta is preceded by a warning signal, often either five or ten minutes beforehand. It informs participants the countdown has begun, and the Yacht-Master II’s curved gauge is there to precisely time the flying start – the long dagger-like hand marks the countdown seconds while the small red arrow-tipped hand displays the countdown minutes.

However, the clever part comes should our yacht skipper need to reset the countdown for any reason. The watch is the first in the world to feature a mechanical memory with both flyback and fly-forward functionality, and it allows the regatta timer to reset to synchronize with the official race timer – either forwards or backwards to the nearest minute. Therefore, should the countdown have been triggered too early or too late, it’s a simple step to bring it back in line. 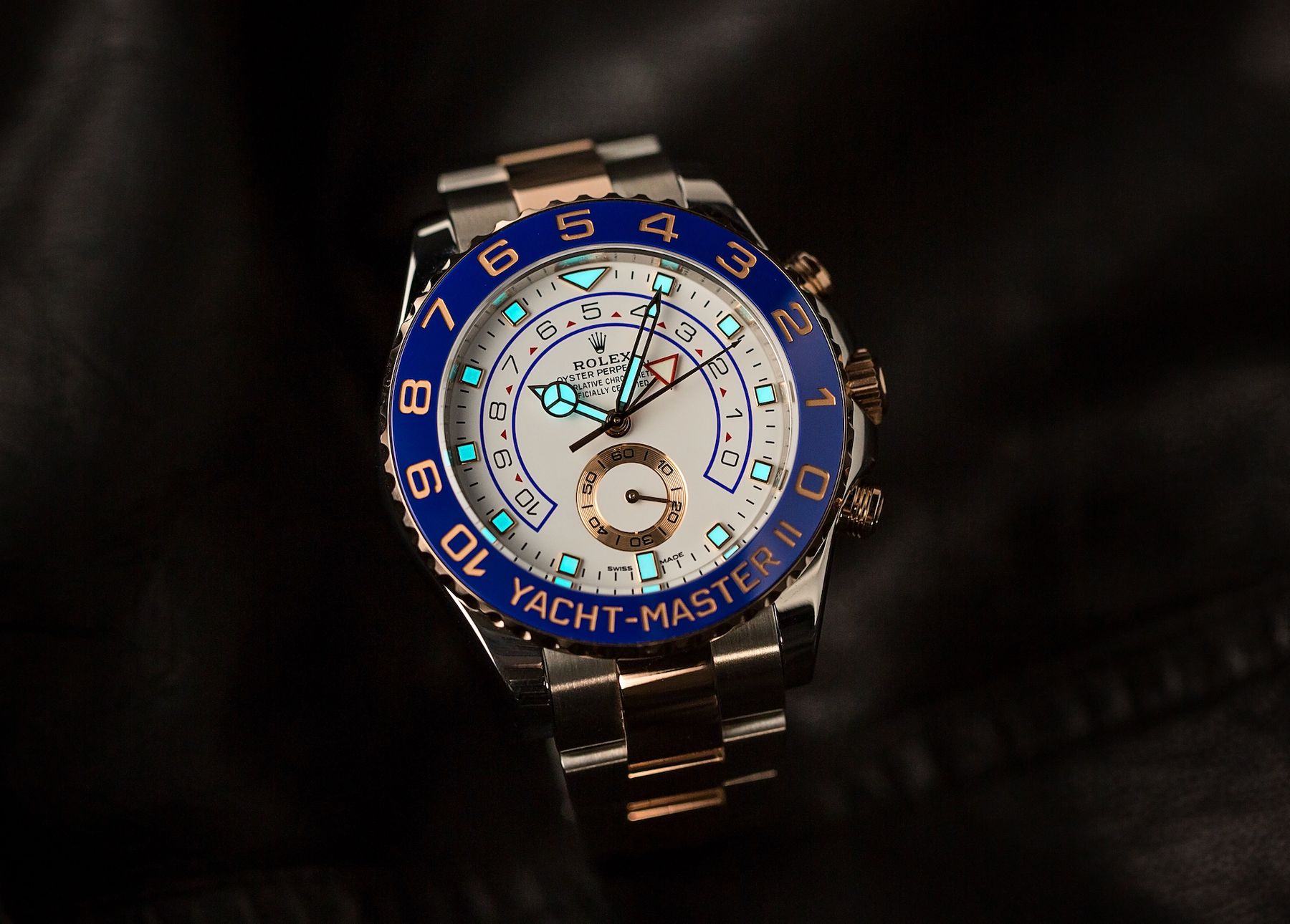 First, Rolex replaced the original straight hands with a Mercedes handset, which is much more common across the brand’s sports watches. Also, the hands of the Yacht-Master II 116681 went from a dark blue to Everose gold – a nice touch to match the rest of the pink-toned details of the watch. Another dial update that occurred to bring the face of the Yacht-Master II more in line with Rolex’s other sports watches concerns the shape of the hour markers.

Earlier models featured square lume-filled indexes for each hour. However, after the 2017 dial redesign, Yacht-Master II watches now included an inverted triangle and a rectangle at 12 and 6, respectively. Naturally, since the Yacht-Master II 116681 is an Everose Rolesor edition, the hour markers feature Everose gold surrounds. 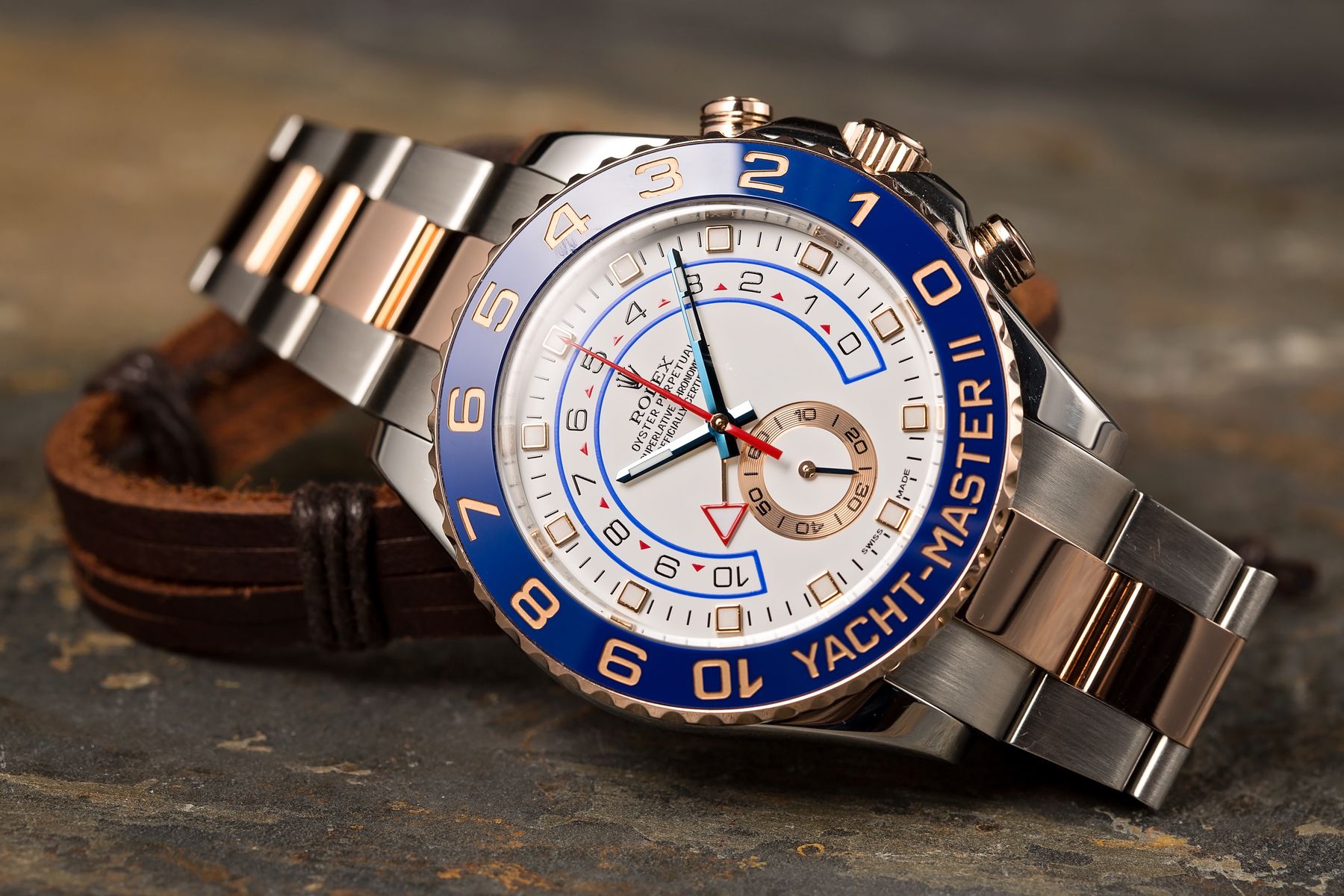 The key to the impressive functionality of the Rolex Yacht-Master II lies in the model’s most conspicuous component: the bright blue Cerachrom bezel with its oversized, pink golden numerals. More than simply being the watch’s border, the bezel is central to its overall operation.

Directly linked to the internal movement, the Ring Command Bezel, to give it its proper title, unlocks the programmable actions of the watch by rotating it counter-clockwise through 90 degrees. With the bezel activated, the crown can be used to set the countdown duration and the two pushers at the two and four o’clock positions start and stop the chronograph and work the flyback function. It sounds like a convoluted affair, but in reality, there is a beautifully designed intuitiveness to getting the most out of the Yacht-Master II.

The Rolex engineers have pared down the process as much as possible, while still retaining all the necessary performance. Underneath everything lies the movement. The original references were released with the Cal. 4160, a heavily reworked version of the Daytona’s Cal. 4130, complete with the vertical clutch that eliminates backlash on the chronograph seconds hand.

By 2013, Rolex had perfected the purpose-built Cal. 4161 specifically for the Yacht-Master II. At the time, it was the company’s most component-heavy movement to date, and the Caliber 4161 is constructed from 360 separate parts. As well as the improved accuracy and shock resistance provided by including Rolex’s proprietary Parachrom hairspring, the 31-jewel, high-beat movement also has a power reserve of 72 hours. 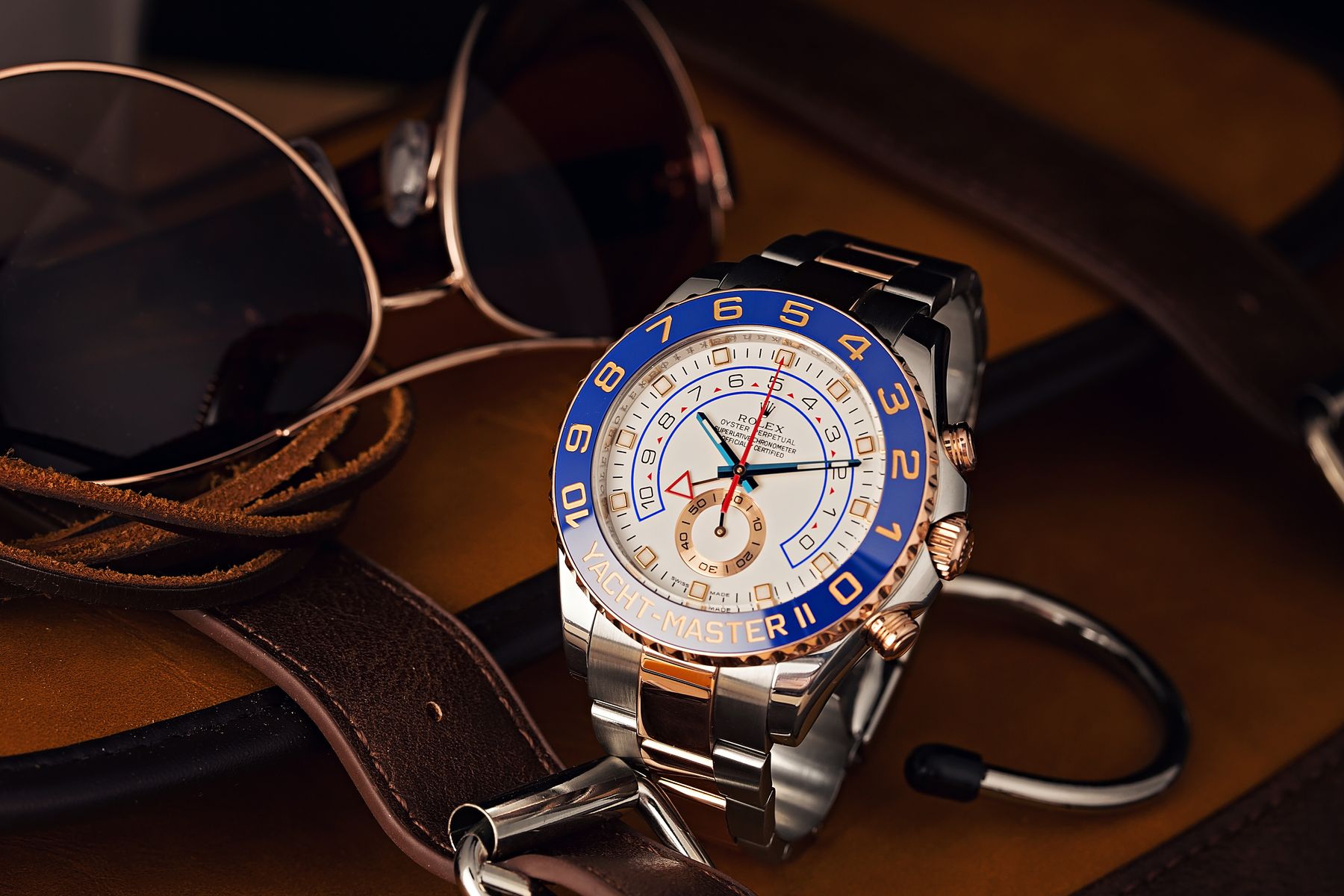 The Rolex Yacht-Master II ref. 116681 has been a part of the brand’s catalog for over a decade now. Despite the movement update in 2013 to the Caliber 4131 and the dial update that occurred in 2017, Rolex has retained the same reference number since this two-tone variant’s release in 2011. And that’s quite curious given that Rolex has allocated new reference numbers to other watch models that have undergone much more subtle updates. Rolex truly works in mysterious ways!

While the Rolex Yacht-Master II 116681 has an undeniable heft and is ultra-luxurious, it can easily be worn all day. Its watertight Oyster case ensures it’s more than a match for the rigors of life on the ocean and its robust self-winding movement is top-notch. As a skipper’s watch, this Rolex Yacht-Master II is in a class all its own. But even if you don’t sail competitively and only ever use the watch’s innovative timing function in the kitchen (if at all,) the steel and Everose gold Yacht-Master II ref. 116681 is a head-turning luxury sports watch that’s unlike any other in Rolex’s lineup. 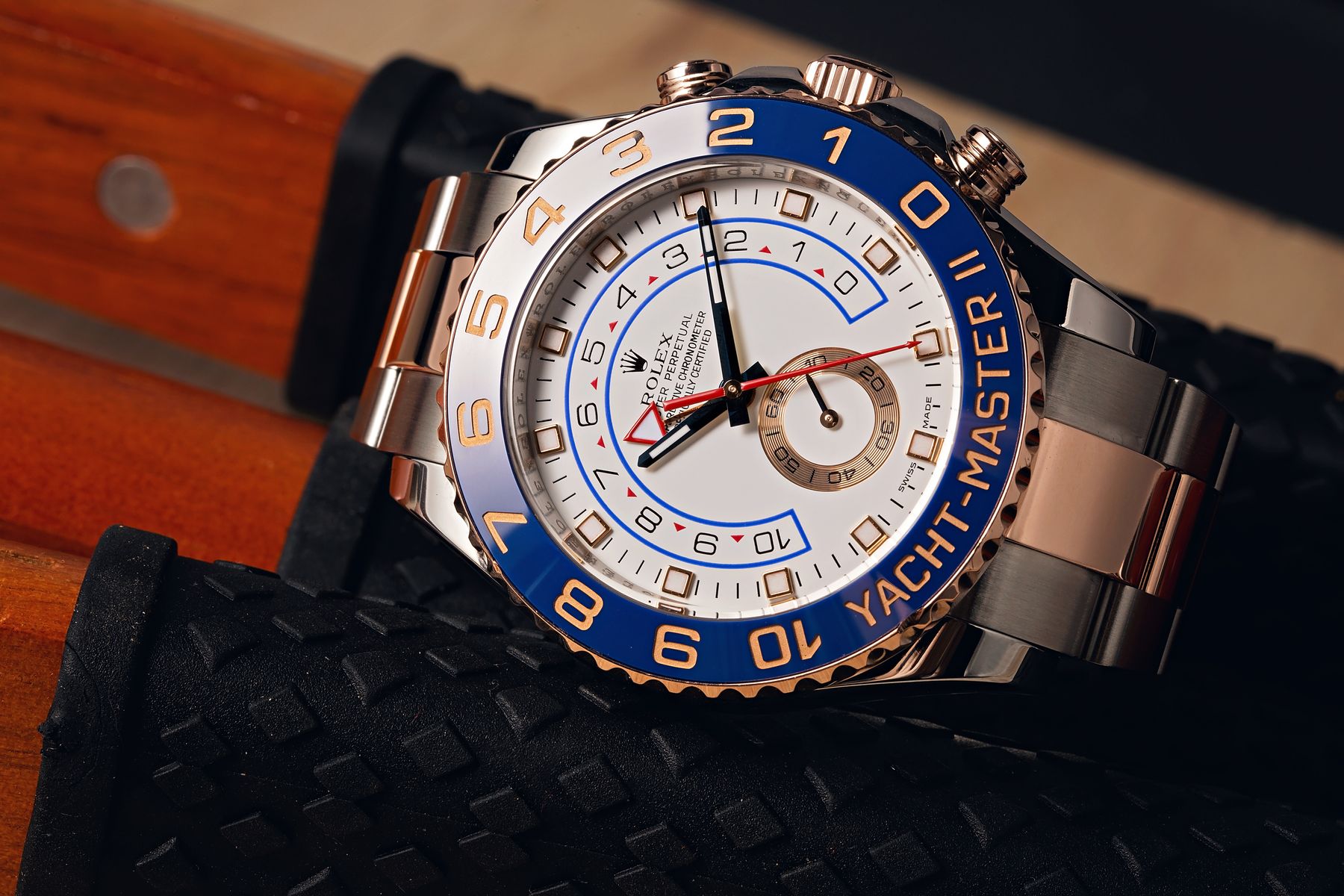