Created in the late 19th century and made an official federal holiday in 1894, Labor Day is a time when Americans can pause to recognize the achievements of our country’s workers and pay tribute to their contributions to the nation as a whole. For many of us, it also symbolizes the end of summer and gives us the chance to celebrate with parties, barbecues, and street parades. However, a holiday specifically for the workers should be paired with an equally industrious watch, and the brand that makes the most robust, tireless timepieces in the business is (of course) Rolex.

It seems only right that the watch manufacturer who brought us the concept of the tool watch in the first place should be front and center on Labor Day. Therefore, we have put together a list of some of our favorite Rolex watches that are worthy of commemorating such an important day. 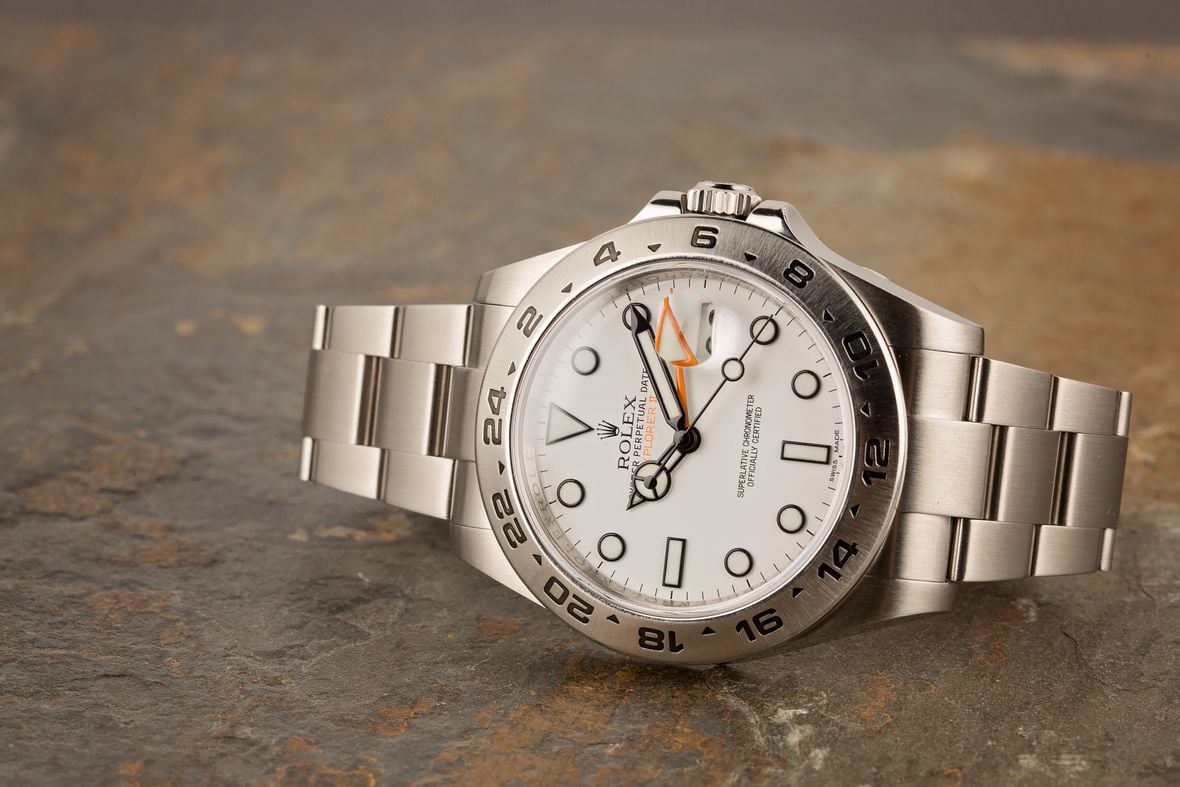 If we’re going to talk about hardworking watches, then the Rolex Explorer II seems like the perfect place to start. The model is arguably the one that has stuck closest to Rolex’s roots, and it is also the one that best exemplifies the definition of a true tool watch. Big, strong, robust, and mechanically reliable, it is the piece that you could genuinely wear everyday, no matter your occupation.

Released in 2011 and only superseded this year, the reference 216570 is from the fourth generation of the Explorer II and the first to offer a case size of 42mm. Equally important, it also reinstated the ‘Freccione’ GMT hand from the debut reference. The big, wide, bright orange indicator (taking its nickname from the Italian word for ‘arrow’) had been missing (and missed) ever since the very first example, the ref. 1655 “Steve McQueen” Rolex was discontinued in the 1980s.

However, unlike that model, the ref. 216570 is a true GMT watch capable of tracking two time zones at once thanks to the in-house Cal. 3187 movement giving independent control over the two hour hands. The bezel has remained as a purely stainless steel component as well, not yet succumbing to the allure of Cerachrom ceramic as with many of the brand’s other sports watches. It is also fixed in place and non-rotating, which further distinguishes it from the Rolex GMT-Master II series, even though the two collections have shared a case and a movement for much of their respective histories.

As always, the dial choice is straightforward with the only options being black or white. Each imparts a definite personality on the watch, with the white “Polar” dial giving it a clean crisp look, while the black is more stealthy and understated. One interesting element with the latter is its ‘phantom’ hands, where the bases of all three main hands have also been painted black, giving the impression they are floating. If you are looking for a watch to wear all-day for the rest of your life, then the Rolex Explorer II is a definite contender, and with prices starting at around the $10,000 mark, it also happens to be one of the most attainable (at least for now). 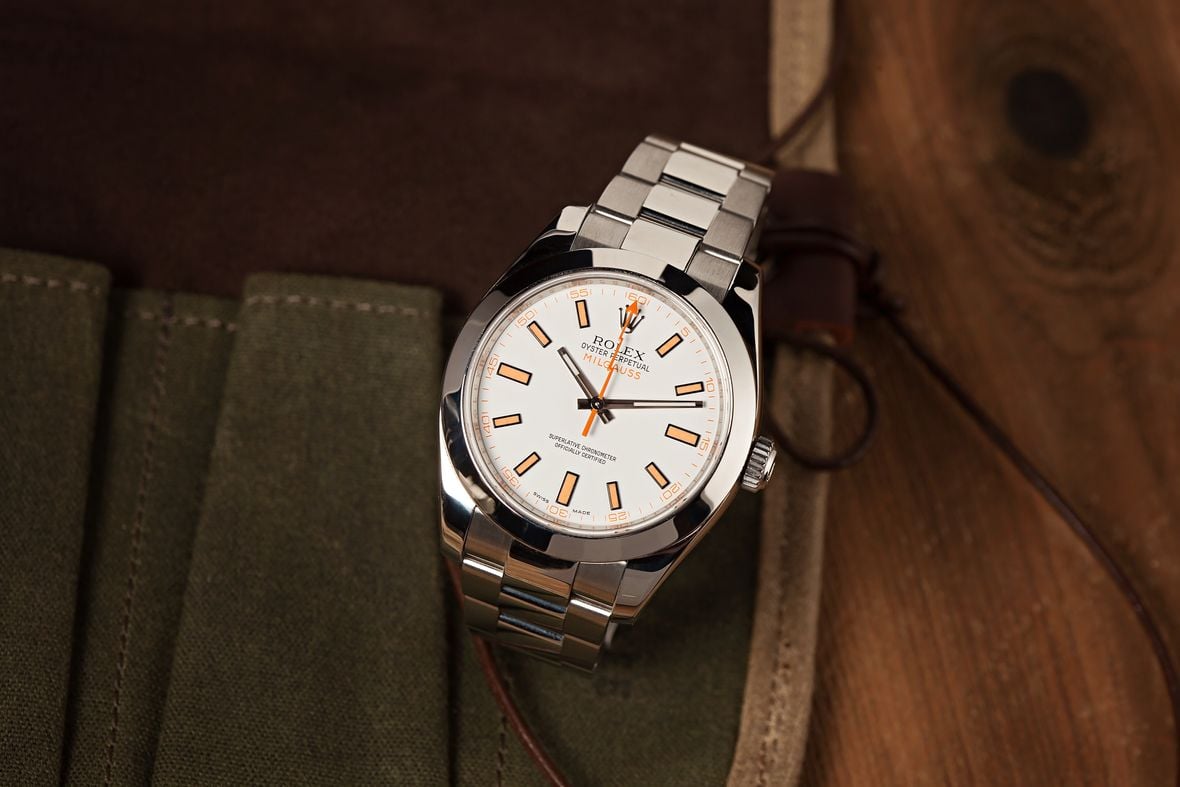 First appearing in 1956, the Milgauss stems from the heady golden age of Rolex. The era that gave rise to the tool watch genre itself, it was the Milgauss added protection from electromagnetic forces (achieved through the use of a second, internal case acting like a Faraday cage), which made it aimed at scientists, technicians, medical professionals, and indeed anyone working with equipment giving off strong magnetic energy.

A fine watch, and one with a truly useful real-world application, the reason the Rolex Milgauss never enjoyed quite the same recognition as some of its siblings came not from a lack of ability, but rather a lack of glamor. It was pure bad luck to go into competition versus some of Rolex’s most iconic models of all time. In the space of just a handful of years during the mid-1950s, the brand also released the Explorer, the GMT-Master, the Submariner, and the Day-Date – and against watches built for adventurers, transcontinental travelers, deep-sea divers, and world leaders, the buttoned-down environment of the laboratory was never going to spark the imagination to quite the same degree. Even still, the Rolex Milgauss remained in production right up until 1988, when it was quietly discontinued. However, with the opening of the Large Hadron Collider at CERN in 2007, Rolex decided to commemorate the event by reinstating the model, and came back with the Milgauss reference 116400.

Now in an enlarged 40mm case, the handsomely minimalist watch was offered with either a black or white dial, both with simple baton indexes and smooth polished bezels. As a nod to its talents (and potential audience) the seconds hand was shaped as a lightning bolt just like original Rolex Milgauss watches from the 1950s. However, this time, it was finished in a vibrant orange hue to compliment the small accents present on the dial.

Our pick (an obvious Labor Day choice or not) is the white dial example of the ref. 116400 Milgauss. Only in production for about seven years before it was replaced by the Z-Blue dial verizon, the white dial Milgauss is actually something of a rarity for the company. Rolex doesn’t make all that many white dial tool watches and so that, coupled with the limited availability in general, make this particular Rolex Milgauss both an uncommon sight and a potential future collectible. 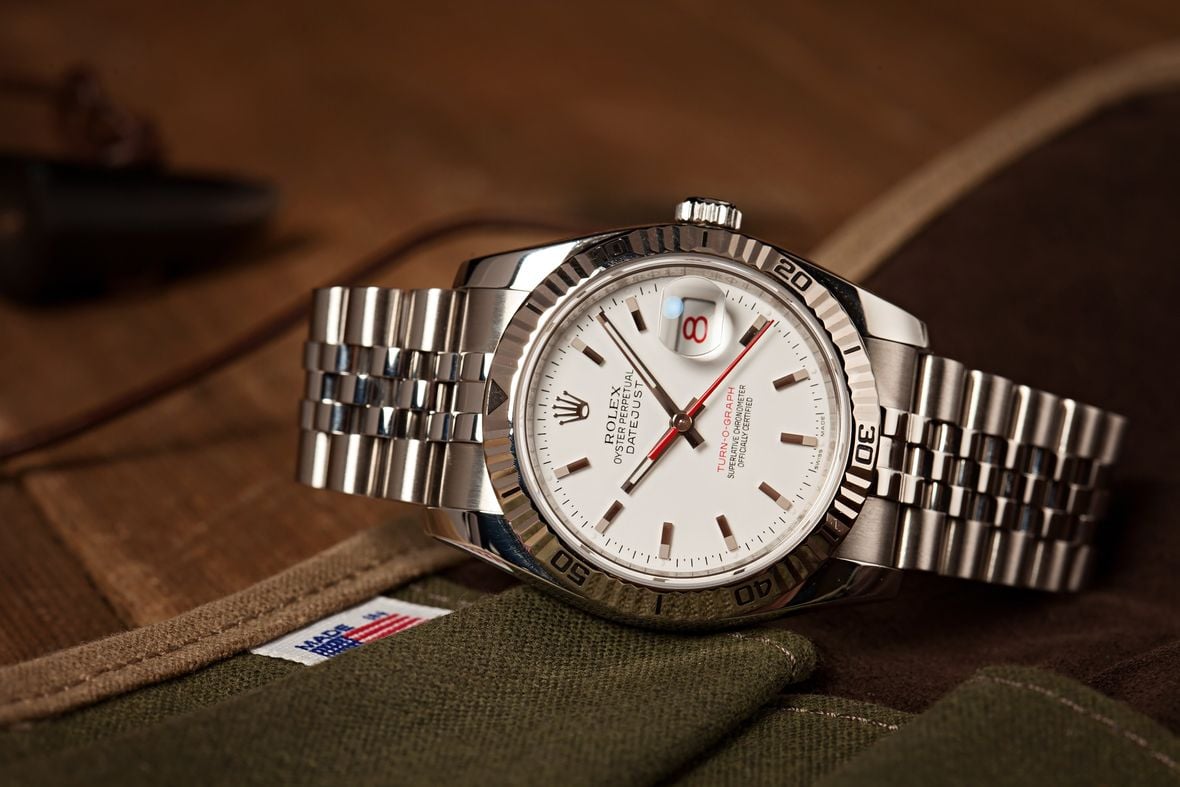 Another watch originally from the 1950s is the Turn-O-Graph, although since it is one of the lesser-known Rolex models and no longer in production, you’d be forgiven for it not being on your radar. Debuting in 1953, the Turn-O-Graph actually has a whole slew of firsts to its name, despite its ‘forgotten’ status among the brand’s numerous iconic models.

The Turn-O-Graph was the first serially-produced Rolex watch to be fitted with a rotating bezel (yes, even before the Submariner). That utility sets it out as the first official Rolex tool watch, as it meant the bezel could be used to track elapsed time. And one specific group for whom that feature was especially useful was pilots – which led to the Turn-O-Graph’s more commonly used nickname: the Thunderbird.

The USAF’s aerobatic stunt team (the Thunderbirds) adopted the watch in the late ‘50s, with the novel bezel proving valuable for navigation calculations. As with the Milgauss, the Rolex Thunderbird struggled for traction against better-known stablemates and was ultimately withdrawn from the catalog completely in 2011. However, examples are still readily available on the pre-owned market, with our top choice for Labor Day being the Turn-O-Graph ref. 116264, which was from the last generation of the model and listed as part of the greater Datejust collection.

The 36mm stainless steel case is topped with a unidirectional 18k white gold fluted bezel that features 60-minute gradations – very much a rarity in the brand’s history. Available in a small selection of dial colors, the white is arguably the most eye-catching, especially with the bright red seconds hand, date wheel, and “Turn-O-Graph” name. Inside is the in-house Rolex Caliber 3135, which is recognized as one of the very best mass-produced movements ever created and as faultless a performer as you could want. As an everyday, hardworking watch to accompany you for a lifetime, the Rolex Turn-O-Graph is the perfect companion. 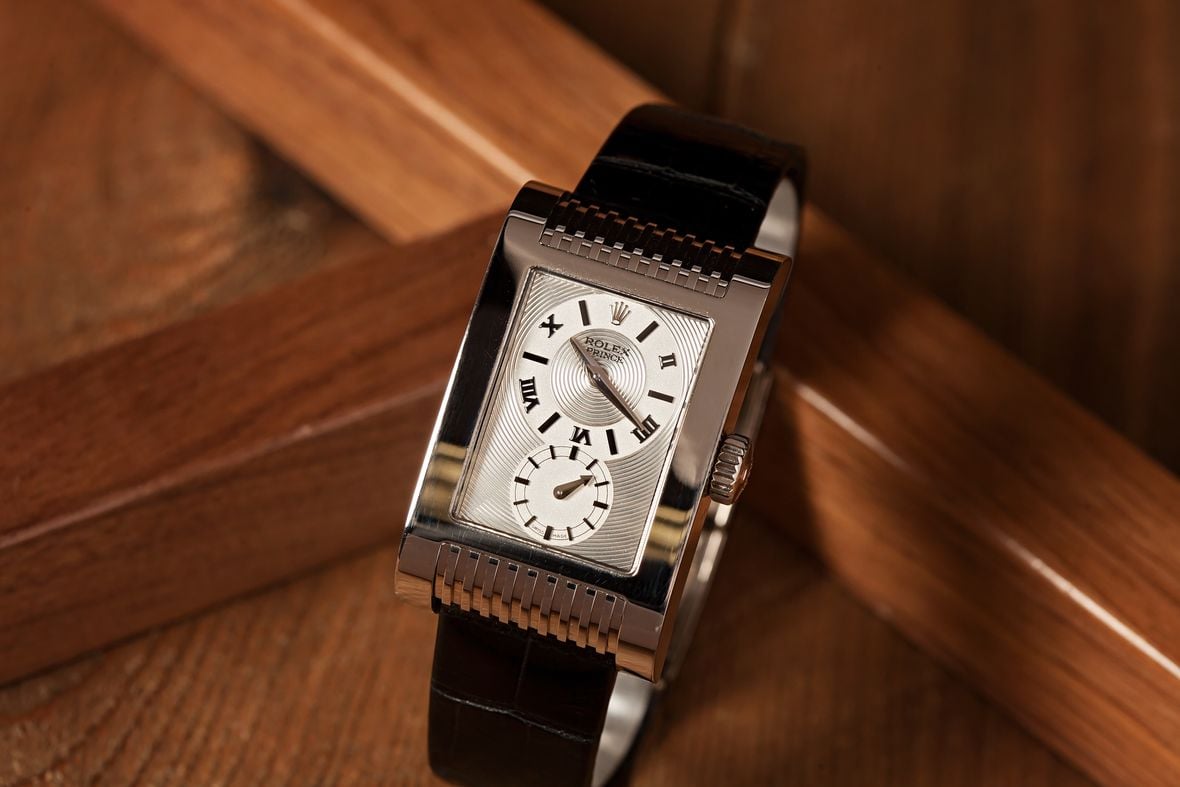 The original Rolex Prince first appeared in 1928 as an elegant, rectangular model that became known as the ‘Doctor’s Watch’ due to the running seconds being given its own separate sub-dial, which made it easier for physicians to time a patient’s pulse. While it did its job well and could be found on the wrists of a number of high profile wearers (even Al Capone was reportedly a fan) the hefty price tag and overtly Art Deco styling meant that it had its day by the 1940s.

The ref. 5441/9 is unlike anything else you will see from the modern Rolex brand. The 27mm by 42mm case is crafted from solid 18k white gold, gently curved and featuring some stunning Art Moderne touches such as the deep parallel grooves at the top and bottom. The figure-eight dual dials have a slight overlap, with the main time-telling face given a mixture of Roman numerals and small batons for indexes, while the seconds counter has an unmistakable railroad edge. Outside of the dials, a beautiful circular guilloche pattern that adds a textured motif and, almost uniquely from the brand, that level of finishing is carried over onto the bridges of the movement, which are visible through a display case back.

Despite making some of the best in-house movements in the business, Rolex just doesn’t show off its calibers in the same way that many other manufactures choose to do these days, and so Rolex’s movement decoration is usually industrial at best. However, the “Godron Circulaire” pattern on the manual-wind Cal. 7040-3 is a joy to see, and the movement provides a 28,800vph frequency and 70-hour reserve from fully wound.

Sadly, the Prince was discontinued for a second time in 2015, with a lack of interest being the main fault once again. However, the Cellini Prince ref. 5441/9 remains a fantastically chic timepiece, a radical departure from the Rolex norm and definitely worthy of any well-dressed doctor.