I’ve decided that I very much like having my mind changed. Moritz Grossmann should, therefore, be very proud of itself for having changed my mind several times this year. The brand’s latest release, the Moritz Grossmann Hamatic, might just be my favorite yet – thanks, in large part, to an incredibly unusual movement aesthetic, and the absolute mastery of mature minimalism in a luxury watch. 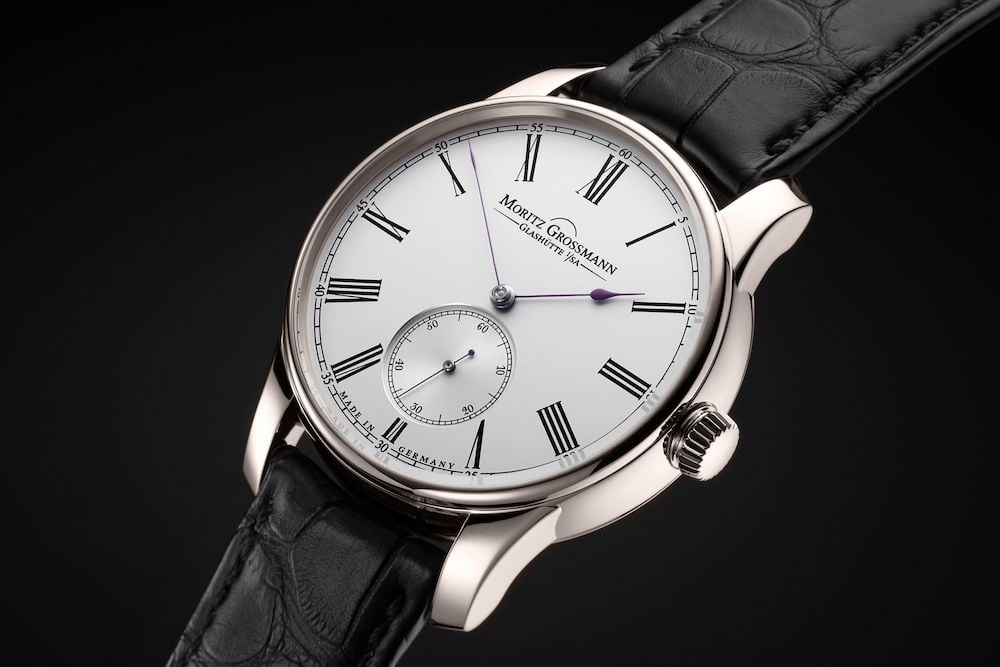 Having worked across the train tracks from Moritz Grossmann for years, I was very familiar with their work. I’ve always loved their movement aesthetic, but never found the overall package that appealing until the release of the Moritz Grossmann GMT this January. Since then, the brand that takes its name from one of the area’s greatest watchmakers and social champions has started releasing what I consider to be a phenomenally refined raft of watches that demonstrate a real turning point for the company. 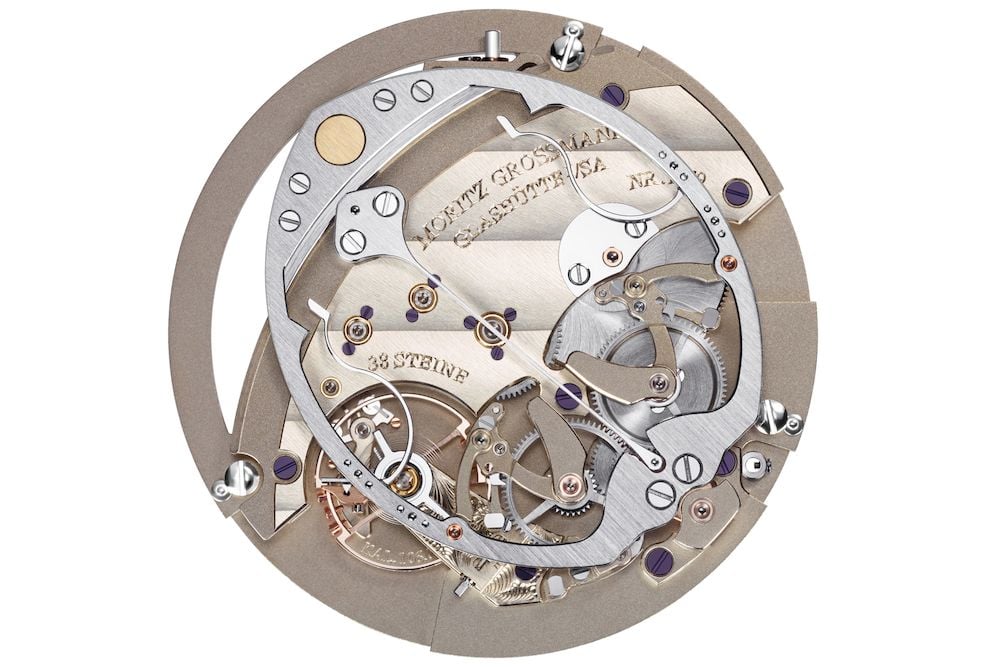 Following the release of the Moritz Grossmann GMT, the Moritz Grossmann Corner Stone, and now this, the Moritz Grossmann Hamatic, I feel that there is a very clear visual identity of the brand emerging. It perfectly integrates the beautiful movements with the cases and overall aesthetic. For the first time since the company started its journey in 2007, I am fully converted. And it was the movement of the Hamatic that pushed me over the edge.

Last year’s Hamatic attempted to bring the movement to the fore by making parts of its quirky pendulum winding system visible through the dial. Three clumsily executed cut-outs completely destroyed the watch for me. It had the potential to epitomize class but instead ended up looking like a rotary trying too hard. 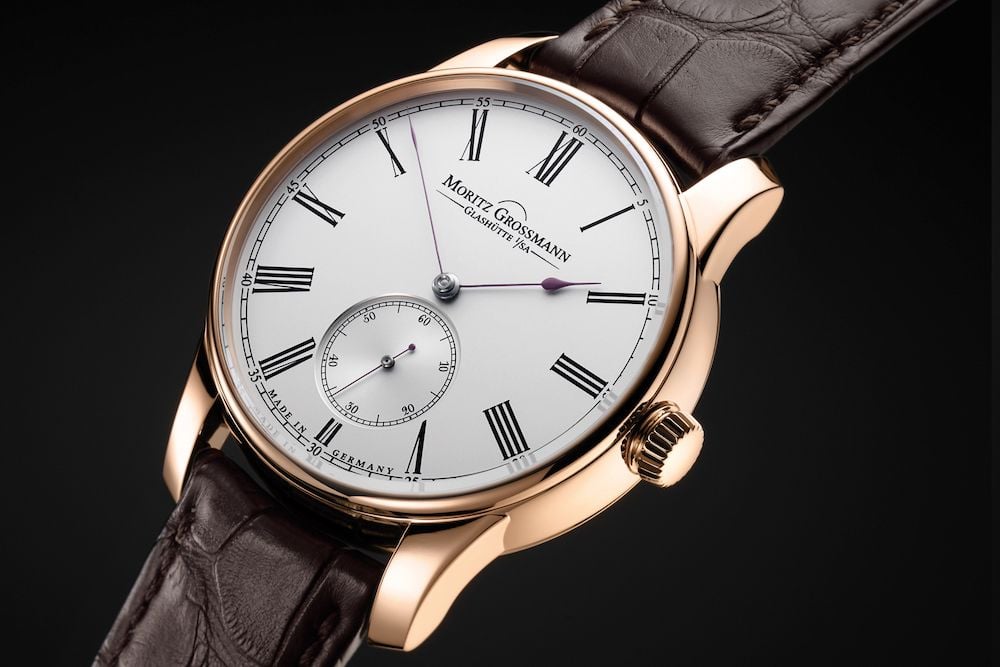 And I think this remarkable ability to mess up something amazing by not just letting it be is what always scuppered Moritz Grossmann for me. But now we’re seeing the opposite. We’re seeing a brand really come to terms with the fact that the brilliance of watchmaking has to do with the fact that so much of the mechanical majesty that keeps these exceptional timepieces ticking is hidden, and that part of its appeal is simply that.

Why do top-notch watchmakers the world over perlage the main plate beneath the dial when it will never be seen? Why do the true artisans that enliven our industry spend hours black polishing components that will never see the sun? They do it because of pride. Because they are pursuing perfection. Not for your benefit, or for the knowledge of the wider world. But because the pursuit is there. Fine watchmaking is the mechanical equivalent of climbing a mountain. There is no point to it but for the achievement. And, very often, that journey is a very personal one. 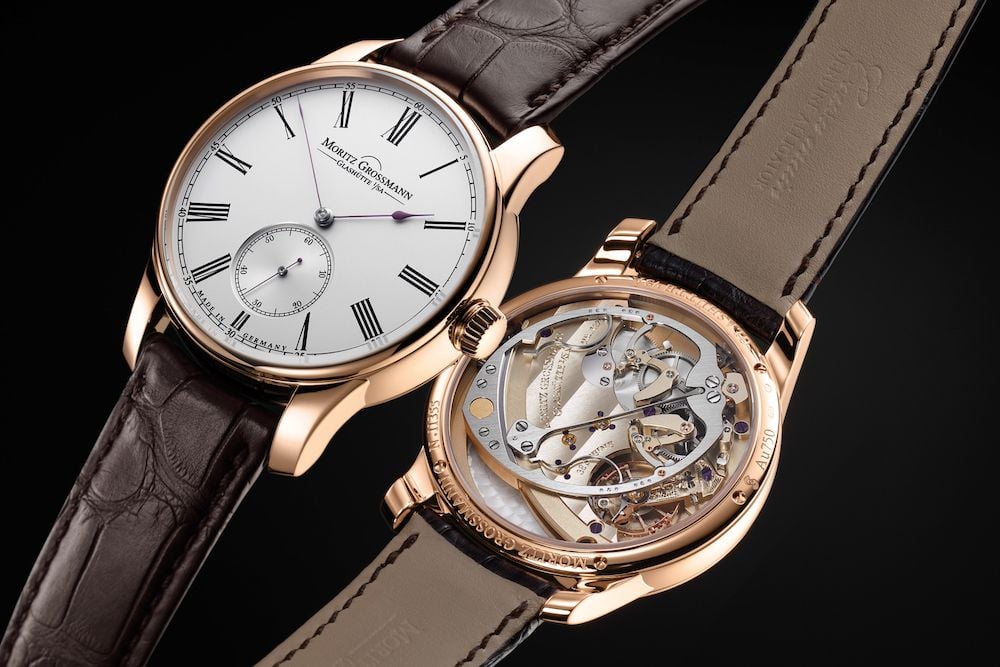 In the early years of its reincarnation, Moritz Grossmann wanted to be noticed. I think that a lot of the designs were trying very hard to be different. Now, it seems, that the brand has realized that the one thing better than being different, is just being better. Gone are the attention-grabbing flourishes, and in their place are strong designs that will never go out of style, powered by movements that are finally given the frame they deserve.

In regards to the Hamatic itself, the ‘frame’ is made from either white or rose gold, and surrounds the caliber 106.0. This is exactly the same movement that was featured in last year’s iteration, but it is now completely hidden behind the dial and only visible when the watch is removed and turned over.

Most automatic watches are wound with a centrally-mounted rotor weight, sometimes referred to as an oscillating weight or mass. Occasionally, often in the quest for thinness, brands will employ an eccentric oscillating weight that shaves height off the movement by being set into a recess cut into the top plate, rather than a separate level above it. For the brand’s very first foray into automatic watches, Moritz Grossmann decided to go right back to the early days of self-winding timepieces for inspiration. 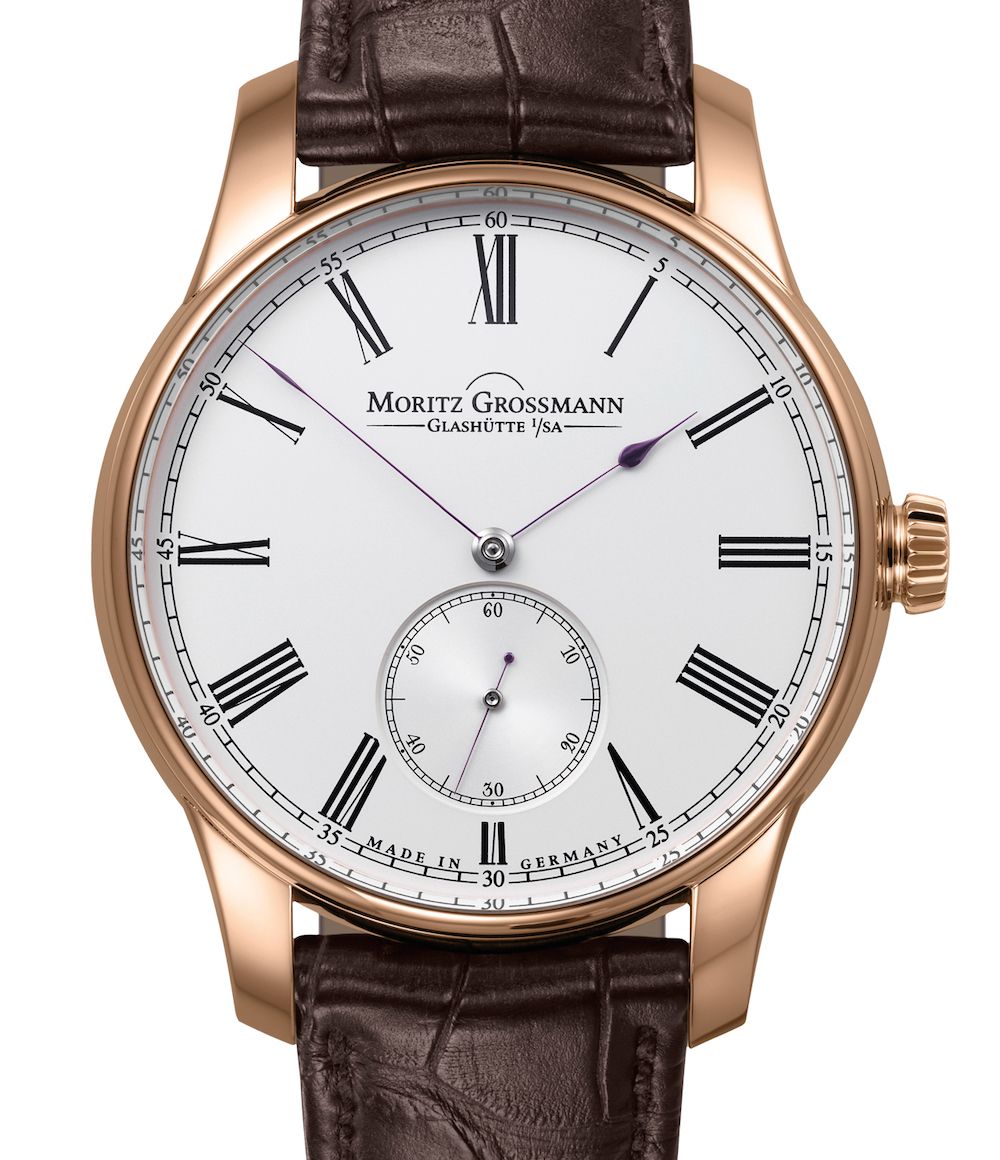 The pendulum is not a new concept. Quite the opposite. The first automatic watches tried to use the same kind of system to convert the movement of the wearer into winding energy for their pocket watches. In many ways, they were successful. But as the watch moved to the wrist expanding the range of expected movement and the possibility of further mechanical miniaturization became a reality, the style of weight we now regard as traditional took over.

As is quite simple to visualize, the gearing needed to convert the back and forth action of the pendulum is not so incredibly different from the systems employed by bidirectional winding rotors. Simply, a pair of click levers pick up the movement of the pendulum as it slides between two spring-loaded buffers on a jeweled roller. The bidirectionally sourced energy is converted into unidirectional winding power by a series of wheels including a reduction wheel. This prepares the energy to be transferred to the ratchet wheel which winds the mainspring in its barrel. 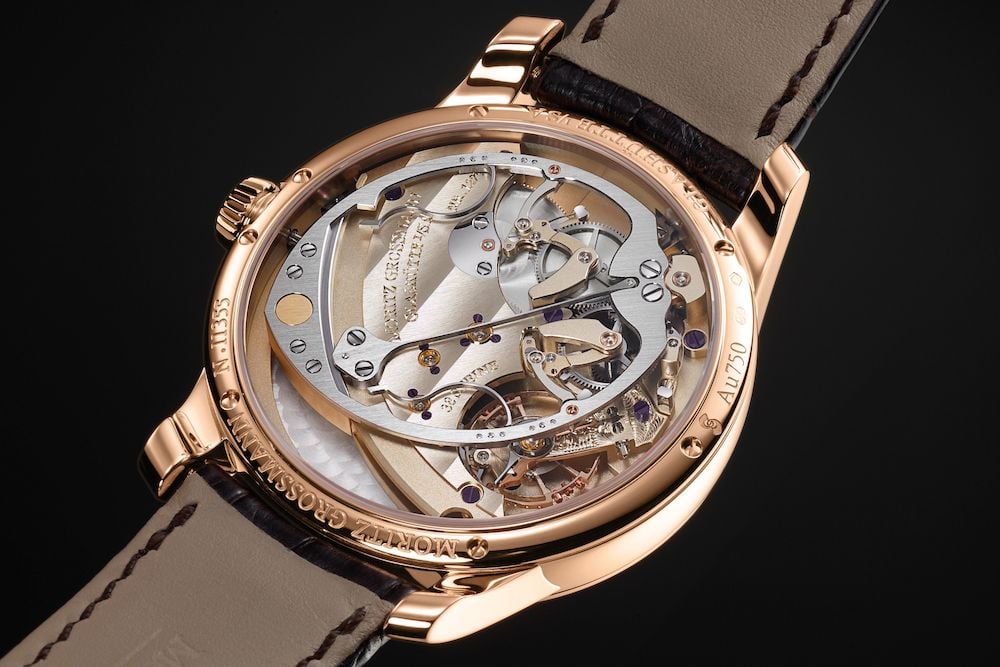 As stunningly complex (and delicate) as that sounds, it is incredibly easy to appreciate the pendulum system in action. From a purely aesthetic perspective, the 106.0 caliber is an absolute dream. German silver plates, decorated with the traditional six bands of Glashütte ribbing, and perfectly coordinated with the purply brown screw heads give Moritz Grossmann a strong visual identity. 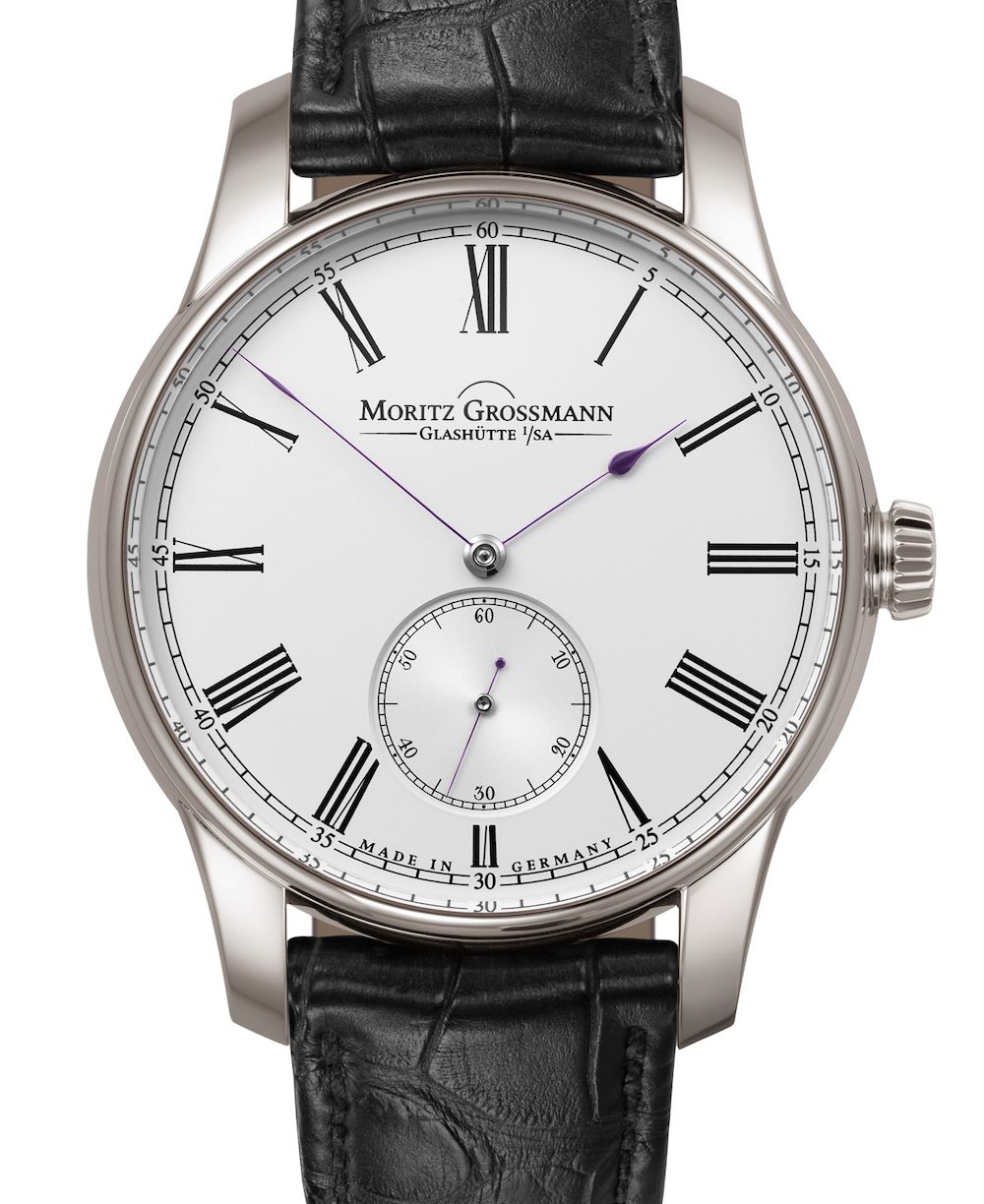 And despite all of this impressive technology and the fact the Hamatic is the brand’s first automatic movement, the whole package measures just 11.35mm tall on the wrist. The gold cases are 41mm in diameter, giving the watches very wearable dimensions indeed. Given the clean design of the solid silver dial with (ludicrously elegant) brown/violet annealed steel hands, the watch wears a little bigger than its dimensions suggest, but its relative slimness keeps it looking very tight on the wrist.

*All images courtesy of Moritz Grossmann