The Real Sea Monsters: Which are our Favorite Deep Dive Watches?

Dive watches remain just about the most popular type of tool watch of them all and there are countless options out there to choose from.

While it didn’t all start with the Rolex Submariner, that was the model that most certainly set the standard for others to follow and it is still among the biggest selling, and most counterfeited, watches today.

Its status has been built on its versatility. The Sub is the one that is as perfectly at home exploring sunken treasures as it is worn under a well-tailored suit—just ask double-oh-whatshisname.

But since its introduction in the 50s, the Submariner’s abilities have been far outstripped by whole swathes of watches that can venture to the very deepest reaches of the ocean, and some are rated beyond even that.

Yet, to achieve the sort of endurance necessary to survive such a plunge, many of these extreme models have had to sacrifice a lot of the Sub’s ambidextrousness. They are the enormous behemoths you wouldn’t dream of, or be physically able to, slip under a shirt sleeve.

However, there are a subset of ultra tough dive watches that can still do both. Strong enough to withstand incredible depths, while keeping enough of a stylish aesthetic about them to not look out of place in more sophisticated company.

Below we’ll take a look at three of our favorite classy deep divers.

Starting in 2002 with a range of aviation timepieces, the ‘British as British can be’ manufacturer Bremont (founded by Giles and Nick ENGLISH) carried their expertise in making watches capable of stomaching the heavy demands of military fliers over to the underwater world in 2009, with the Supermarine S500.

The beautiful and highly accomplished piece, waterproof to 500m you won’t be surprised to learn, proved an instant hit with watch buyers, with mountains of praise heaped on its traditional yet contemporary design.

That was followed up in 2012 with the S2000, a model very much of the same lineage, but with an enlarged case and greatly increased abilities.

Weighing in at a hefty 45mm in diameter, the S2000 is also a touch thicker than its predecessor, all in the name of safeguarding the watch to its new, very impressive depth rating.

Extra size or not, it is not a piece that feels comically large on the wrist and, while certainly substantial, actually wears a little smaller than its numbers would suggest.

The dial is one of the most legible you will find of its type, with lashings of Superluminova on hands and indexes to make it easy to read in even the darkest conditions, and they have also managed to squeeze in a day-date without distracting too much attention.

Inside is a modified 25 jewel ETA 2836 automatic caliber, beating away at 28,800vph and with a 38-hour power reserve. The movement is shielded from magnetic forces by a soft iron Faraday cage and from shocks by a Bremont patented mounting.

Underlining its deep dive credentials, there is also an automatic helium escape valve, as well as a sleek guard protecting the crown, which sits at the two o’clock position, allowing for a more comfortable range of wrist movement.

The Supermarine series, named for the company that brought us the Spitfire, has been a great success for the young company and has recently been bolstered with the S300, an attractive 40mm piece. Understated and extremely wearable, they are quickly becoming a must-have in the dive watch fraternity.

With some specialized watches, their party pieces exist just for the sake of the headlines. What Breitling has come up with instead is a first-of-its-kind function that is actually useful.

The 46mm Superocean is waterproof, like the Bremont, to 2000ft. The big difference is that the Breitling is also a chronograph and is, through some engineering skullduggery, one that can actually be used underwater. 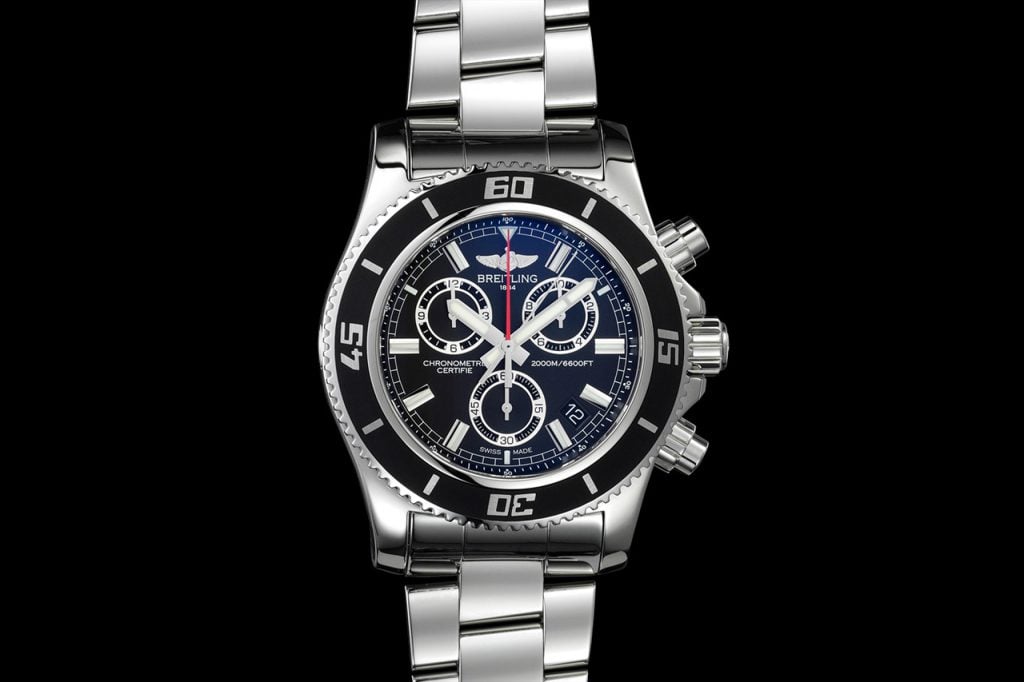 A problem common to all dive watches with button-operated complications, including the digital ones, is the necessity of having holes in the case for the pushers to sit in. That obviously creates a weak spot in the design, where water can seep in and damage the mechanism. By replacing the buttons with magnetic push-pieces, the M2000 eliminates the problem.

The case can now be hewn from one solid block of metal, making it far stronger and more watertight, even two kilometers down.

Like all good dive watches, the Superocean’s dial relies on a strongly contrasting color palette to maintain optimum legibility, with a black face augmented by a choice of striking red, blue or green ringed sub dials (counting out 1/10 sec, 60 minutes and 12 hours). There is also the more traditional monochrome, white ringed, option. For low light readability, it too includes great helpings of Superluminova on hands and hour markers and the face is finished off with a small date window at the 4.30 position.

Covering it all and protecting the integrity of the watch is a 4mm thick cambered sapphire crystal, treated on both sides with an anti-glare coating.

Quartz powered, the M2000 uses the B73 SuperQuartz thermocompensated movement based on the ETA Thermoline 251.232, a COSC-certified engine reportedly 10 times more accurate than standard quartz timers. It features a flyback function to record split times.

Like all Breitlings, the Superocean is more ruggedly handsome than elegantly restrained, but still has more than enough style to match any occasion.

Still very recognizably steeped in the design language that gave us the Submariner and the Sea-Dweller, the Deepsea is like the big brother who’s been at the steroids.

But while it may bare an uncanny familial likeness, at least if you squint, it is what is going on inside Rolex’s ultimate kraken that sets it such a long way apart from its siblings.

Nearly doubling the depth rating of the other two models on our list, the Deepsea’s abilities are made possible by some truly ground-breaking engineering, even by Rolex’s standards. 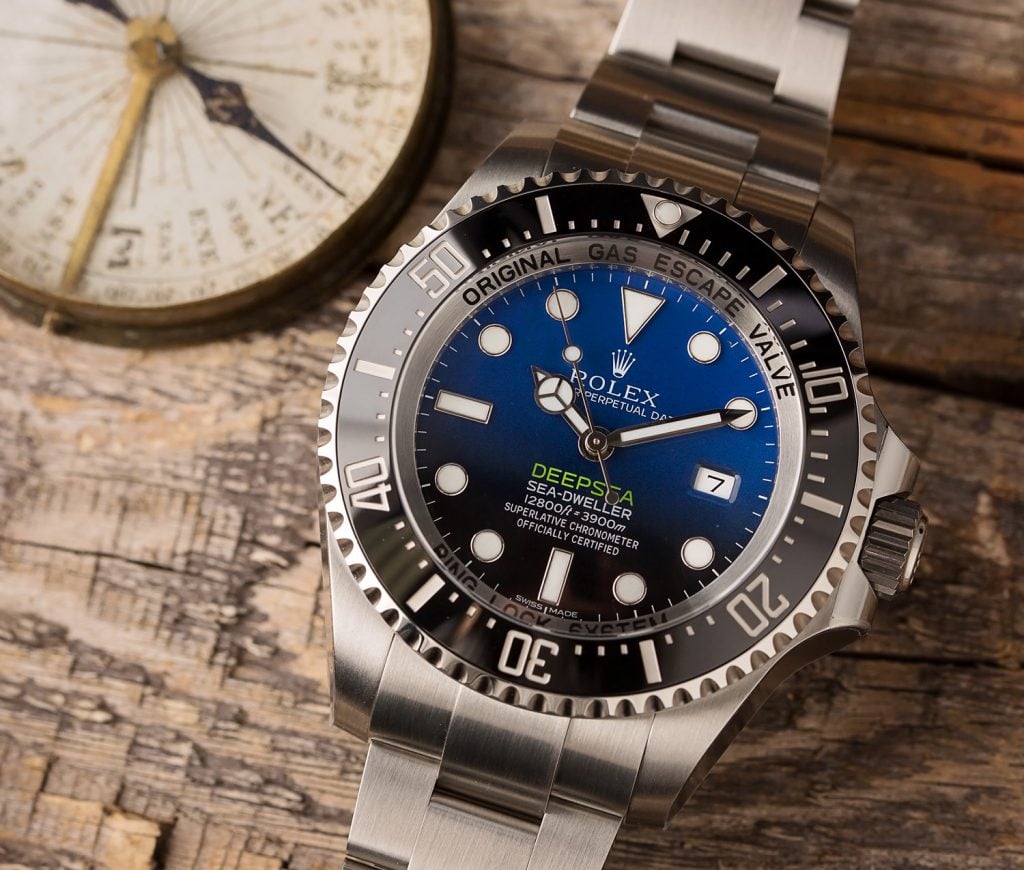 Central to it all is the Ringlock system, a combination of three elements unique to the Deepsea that work together to absorb the crushing pressures that exist at the model’s lowest working depth; as near as dammit two-and-a-half miles underwater. Now that’s a deep dive worth mentioning.

The case back is 3.28mm thick, made from grade 5 titanium and is designed to flex slightly to soak up some of the incredible forces. Covering the dial is a domed sapphire crystal that measures some 5.5mm thick, able to withstand a weight of 4.5 tons pressing down on it. (The Deepsea is also now the only Rolex with a date function that has no Cyclops lens over the window).

Between the two is an inner ring made of Biodur-108 steel, three times stronger than even the 904L the brand uses in all its stainless steel watches, itself the toughest of any manufacturer.

It all adds up to a watch that not only goes far beyond the Bremont and Breitling, but is also the smallest of the three. At 44mm in diameter and 17.7mm thick, it may be the biggest Rolex of them all, but it is a full 10% smaller than a watch with its talents should be. 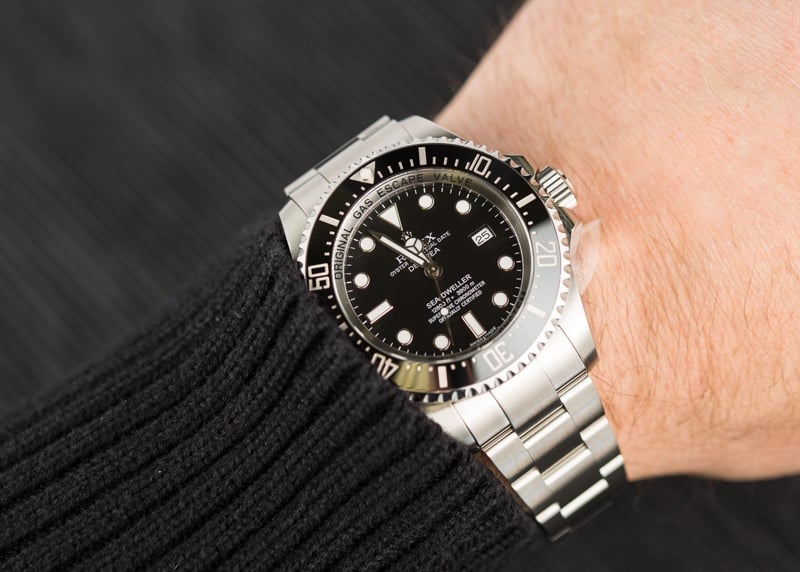 Rolex Sea-Dweller Deepsea ref. 116660 with Black Dial is a good pick for a deep dive watch

Since 2014 it has been available in two variants, identical in every other respect bar the dial. The standard all-black version was joined by the D-Blue Dial, the brand’s first two-tone face, starting a rich blue at the top and blending seamlessly into a deep black at the bottom—a pictorial representation of a dive into the ocean.

And not just any dive. The D-Blue was launched to commemorate James Cameron’s record-breaking voyage to the Challenger Deep, a valley in the floor of the Mariana Trench and the lowest known point on earth. The visionary director became the first man to make the dive solo in 2012.

This year saw the Deepsea undergo a slight update, with slimmer lugs leaving room for a wider bracelet and a more balanced feel. Inside, it received the state-of-the-art Cal. 3235 already powering the Sea-Dweller. A major reworking of its forerunner, the Cal. 3135, the new generation movement replaced around 90% of its components and provided unrivalled levels of reliability and accuracy.

Although it might not share the versatile, dress up or down nature of its diving stable mates, the Deepsea is nevertheless one of the most formidably engineered and impressive creations to come out of a company renowned for pushing the boundaries in watchmaking. Like the other two models in our list, it is a watch strong enough to survive just about anything.