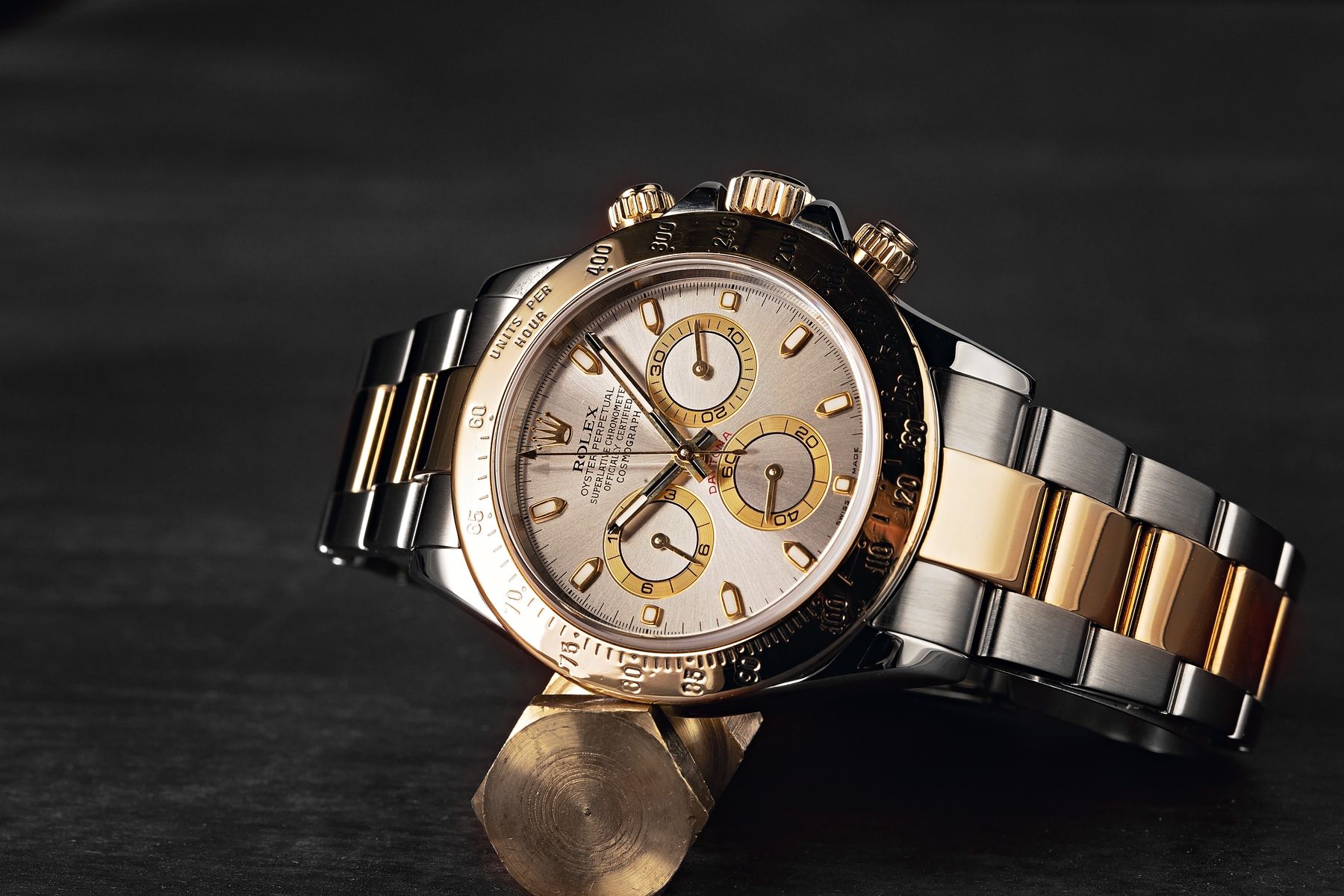 You might be more familiar with the Cosmograph Daytona in stainless steel, but the Daytona is no stranger to gold. In fact, Rolex has been producing the Daytona in lustrous gold since the 1960s, with the earliest Valjoux-powered models featuring options in all precious metal. However, it wasn’t until the 5-digit generation powered by Zenith’s El Primero movement hit the market that two-tone Daytona watches pairing stainless steel with yellow gold started to take the market by storm. With the release of reference 16523, it was possible to invest in a gold Daytona without the top-tier price of a watch in full gold. Two-tone is also arguably more versatile than an entirely gold watch. The next two-tone edition of the Daytona to hit the market was reference 116523.

Rolex released the Daytona ref. 116523 in 2000 as part of the new-generation Daytona collection equipped with the new in-house Caliber 4130 automatic movement. Remember, prior to that year, Daytona watches ran on caliber 4030, which was a modified Zenith El Primero automatic movement. Before that, they were powered by hand-wound movements. Caliber 4130 was significant because it was the very first in-house automatic chronograph movement.

Like all modern Rolex Daytona watches, the Daytona ref. 116523 sports a 40mm Oyster case, screw down chronograph pushers, and a screw-down winding crown. As a Rolesor model (Rolex’s term for two-tone watches), it features an appealing mix of stainless steel and 18k yellow gold throughout the watch, both of which are forged in Rolex’s own foundry using the finest ore available. There’s the yellow gold engraved tachymeter bezel on the stainless steel case and the yellow gold center links framed by steel links on the Oyster bracelet. The Daytona ref. 116523 comes with several dial color and hour marker options. However, they all include the trio of registers at 3, 6, and 9 o’clock. As the watch given to the winners of the 24 Hours of Daytona, the reference 116523 is a coveted collector’s item among many motorsport enthusiasts. 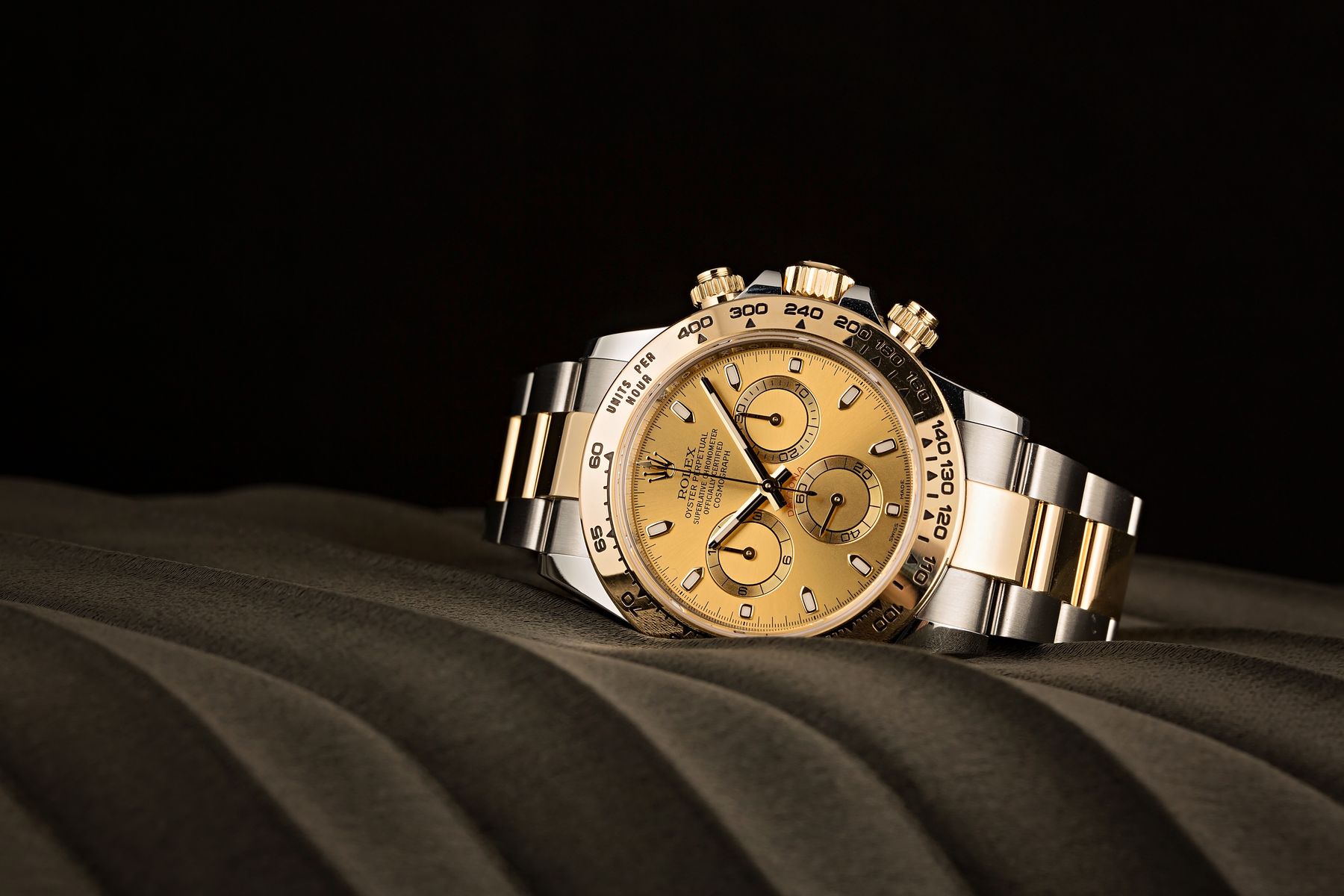 16 years after the debut of the Daytona ref. 116523, Rolex replaced it with the new Daytona ref. 116503. The new two-tone Daytona is almost identical in appearance to the previous one except for a redesigned bezel. The bezel now includes fatter fonts and triangular markings instead of circular ones. The updated bezel also features a slightly different orientation of the Tachymeter scale with the numerals circling in a curve around the bezel instead of positioned perpendicular with the hour markers as seen on reference 116523. Additionally, the hash marks between the 60 to 100 graduations are now underlined by a bold black line, whereas the bezel on ref. 116523 embraces more of a minimalist design with smaller numerals and markers.

Alongside the new 2016 two-tone Daytona, Rolex announced new versions of the yellow gold Daytona and the white gold Daytona with the references 116508 and 116509, respectively. This was done to echo the bezel design of the newer Daytona models in the collection, including the Everose Daytona ref. 116505, the platinum Daytona ref. 116506, and of course, the stainless steel Daytona ref. 116500LN with its black ceramic bezel.

Another detail to highlight is the rehaut engraved with ROLEX ROLEX ROLEX, which was introduced in the mid-2000s as an anti-counterfeit measure. Therefore, depending on the specific year of the Daytona ref. 116523, it can come with either a smooth or engraved rehaut. On the other hand, all Daytona ref. 116503 watches come with the rehaut engraving.

Both editions of the two-tone Daytona feature Rolex’s 40mm Oyster case, complete with a scratch-resistant sapphire crystal and a Triplock screw-down crown with three sealed zones and water resistance up to 100 meters/330 feet. The three-piece link Oyster bracelet is the only option available to the collection and is characterized by solid flat links and a folding Oysterlock clasp. Both watches also feature the 5mm Easylink comfort extension system for quick tool-free adjustment and a bright red Daytona logo curved around the sub-dial above 6 o’clock. 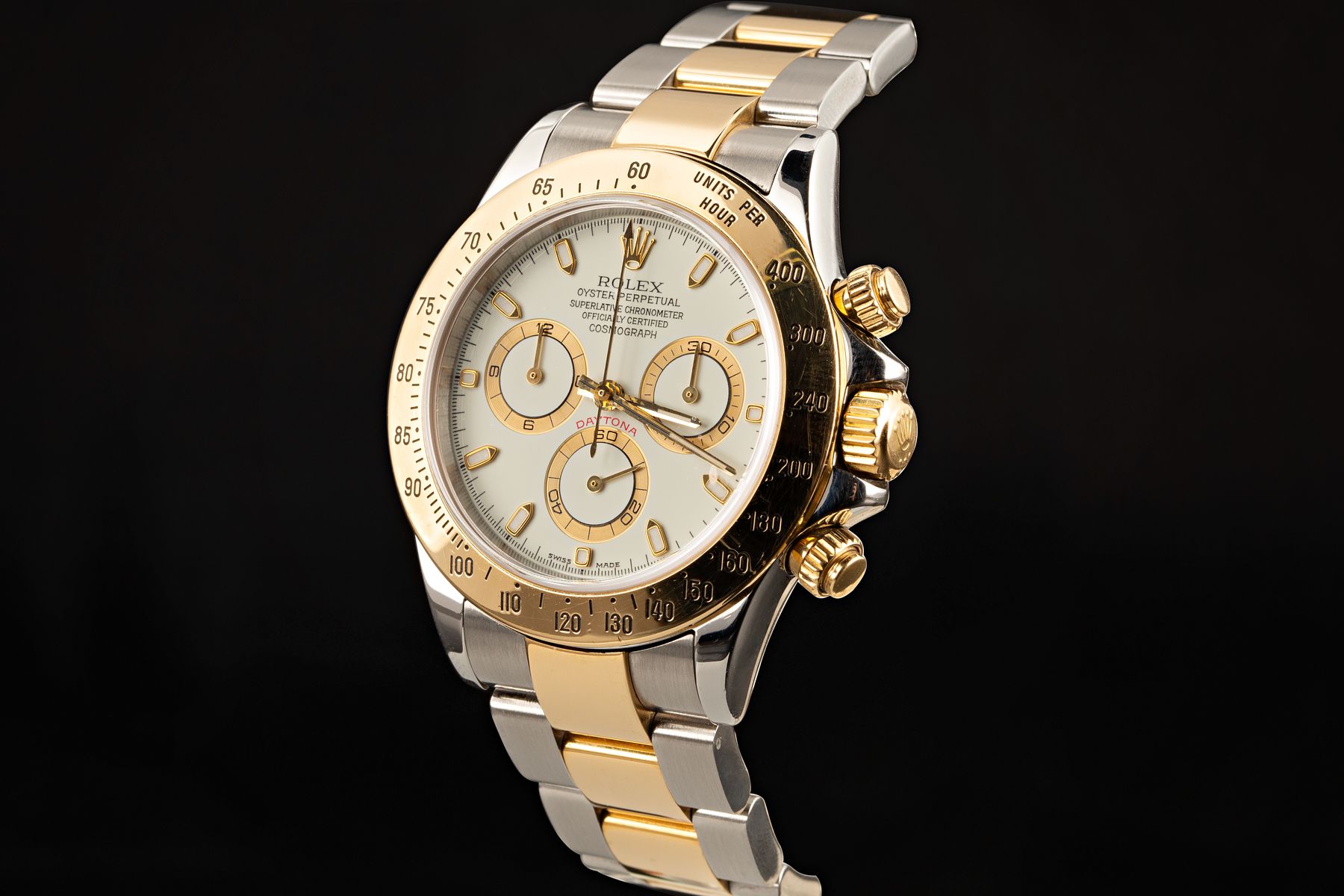 The newer Daytona ref. 116503 includes the same in-house Caliber 4130 self-winding movement with a 72-hour power reserve, just like the preceding Daytona ref. 116523. However, there are a few points of discussion. Rolex enhanced the Caliber 4130 throughout the years to optimize performance. For instance, Rolex launched the in-house made Parachrom hairspring in 2000 inside the Caliber 4130 (which benefits from improved resistance to magnetic fields and shocks), but replaced it with the blue Parachrom hairspring (with improved long-term stability) from 2005 onwards.

Another big change to all Rolex movements was in 2015, when the brand adjusted their precision rating to 2/+2 seconds per day. Plus, Rolex also boosted its guarantee to five years from two years. Therefore, the improved accuracy rating and longer warranty only covers those Daytona ref. 116523 watches that were made from 2015 onwards. Naturally, this is included in all Daytona ref. 116503 watches. 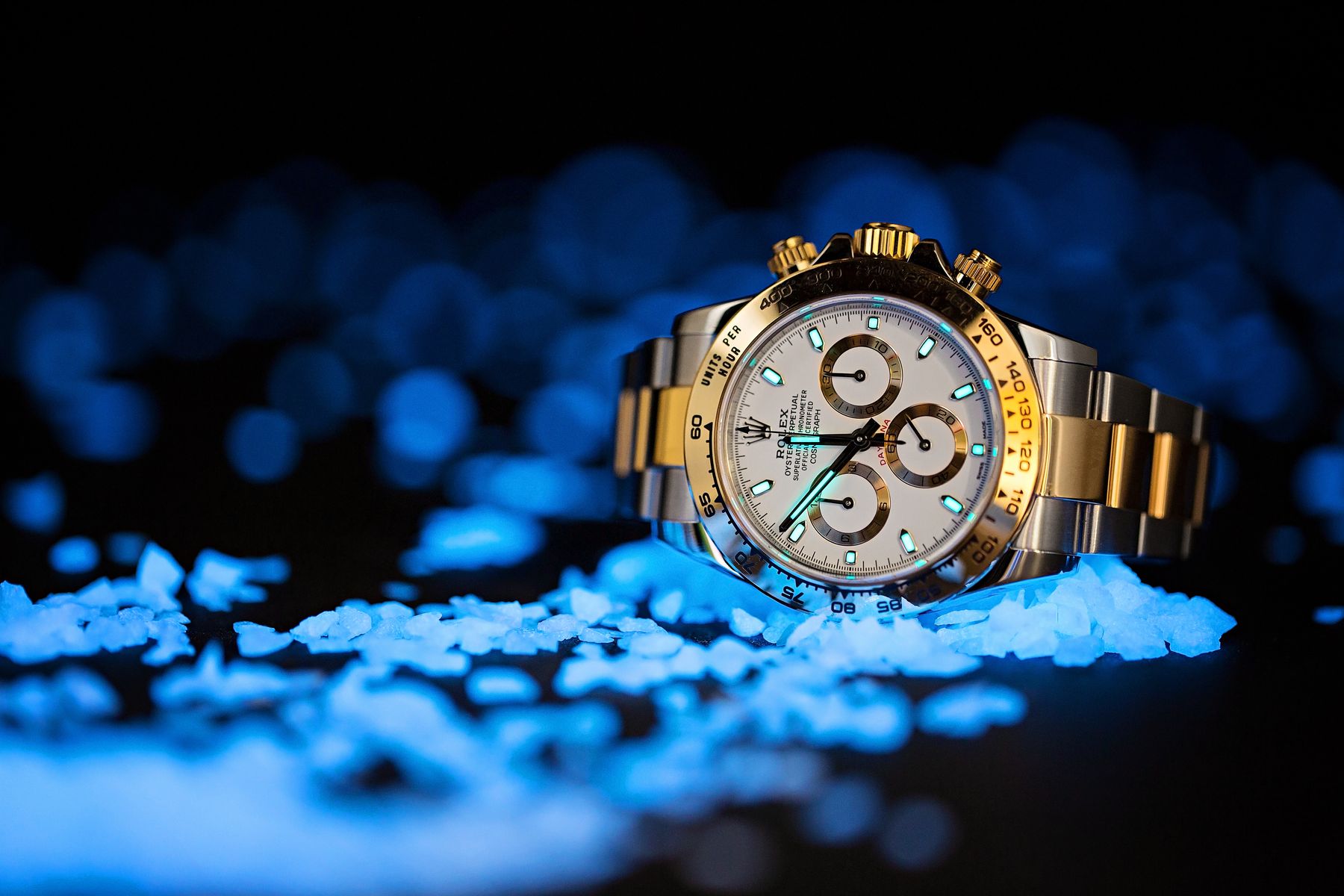 As of 2022, the Yellow Rolesor Cosmograph Daytona is still in production as the reference 116503 with either a black, white, or champagne dial. Additionally, the black dial is available with either luminous or diamond hour markers. This Daytona retails for $17,950 without diamonds and $19,900 with diamonds. However, the secondary market is a different story. Prices start at about $25k and go up from there, depending on various factors such as condition and use of diamonds. As a discontinued Rolex, reference 116523 currently commands a similar pre-owned price. Either way, two-tone and gold Rolex watches are usually a sound investment as they hold their value alongside the price of gold and the popularity of the exclusive Rolex brand.

The Rolex Daytona has garnered a massive following since the 1960s. Even stainless steel models trade hands for pretty hefty sums on the secondary market. If you can get your hands on the stunning Yellow Rolesor Rolex 116503 at the retail price, consider yourself very lucky. Check out our catalog to find the best deals for pre-owned Rolex Daytona watches. Bob’s Watches offers the most competitive prices on the market along with a 100% authentic guarantee. 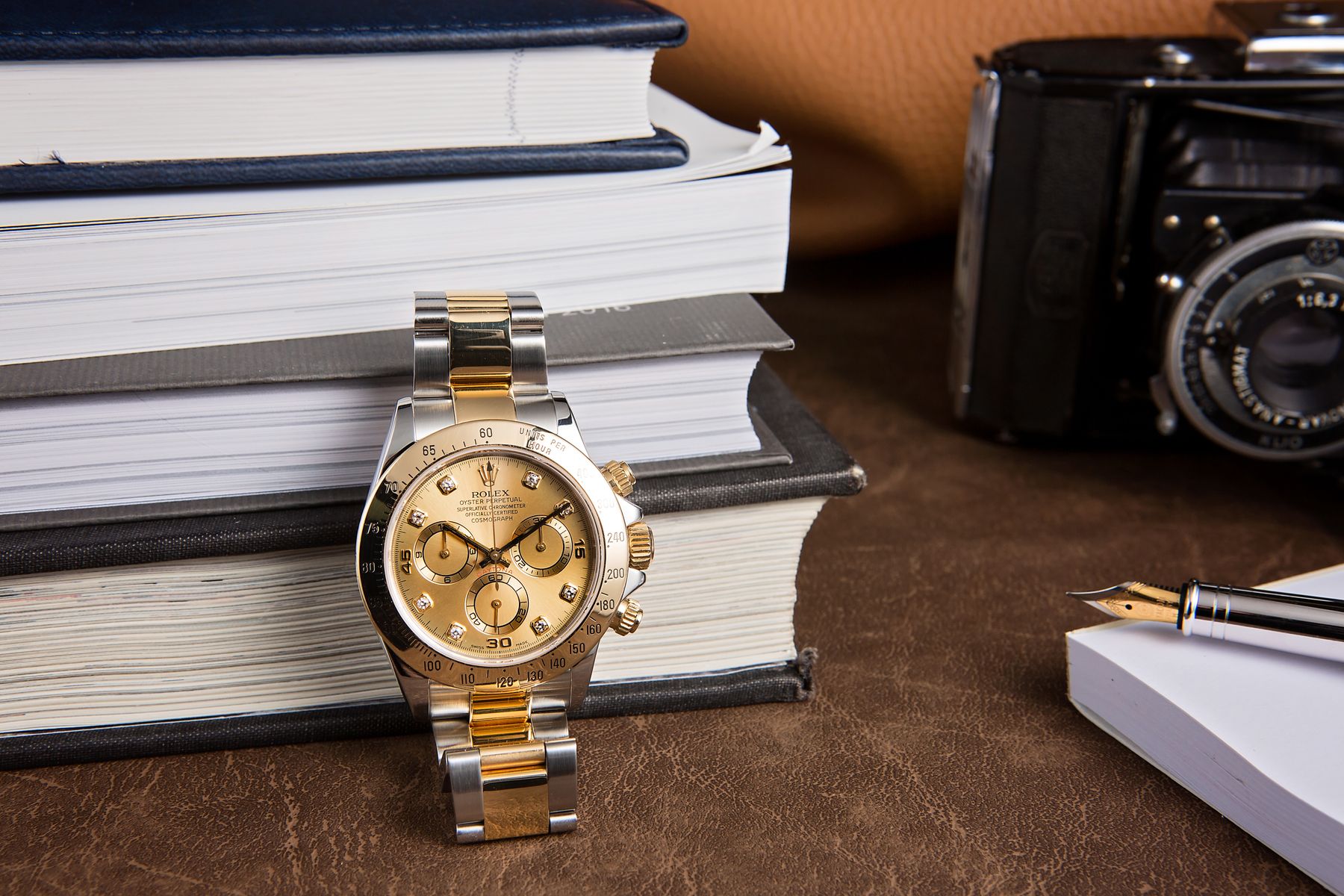