First launched in 1963 and created specifically for the world of automotive racing, the Rolex Daytona collection is arguably one of the most popular and universally respected lines of timepieces from the brand’s entire catalog. And among the numerous references that make up this iconic collection of chronograph watches, the “Big Red” Rolex Daytona reference 6263 is easily one of the most famous, collectible, and instantly recognizable.

The Rolex Cosmograph Daytona holds a special place within the vintage watch collecting world. Arguably more than any other line of Rolex watches, the Daytona has a remarkable way of exciting collectors and attaining stratospheric prices at auction. While a number of vintage Rolex watches (particularly those from the Daytona collection) have attained legendary levels of collectability, the reference 6263 “Big Red” is considered by many to be one of the most desirable vintage Rolex Daytona models of all time. 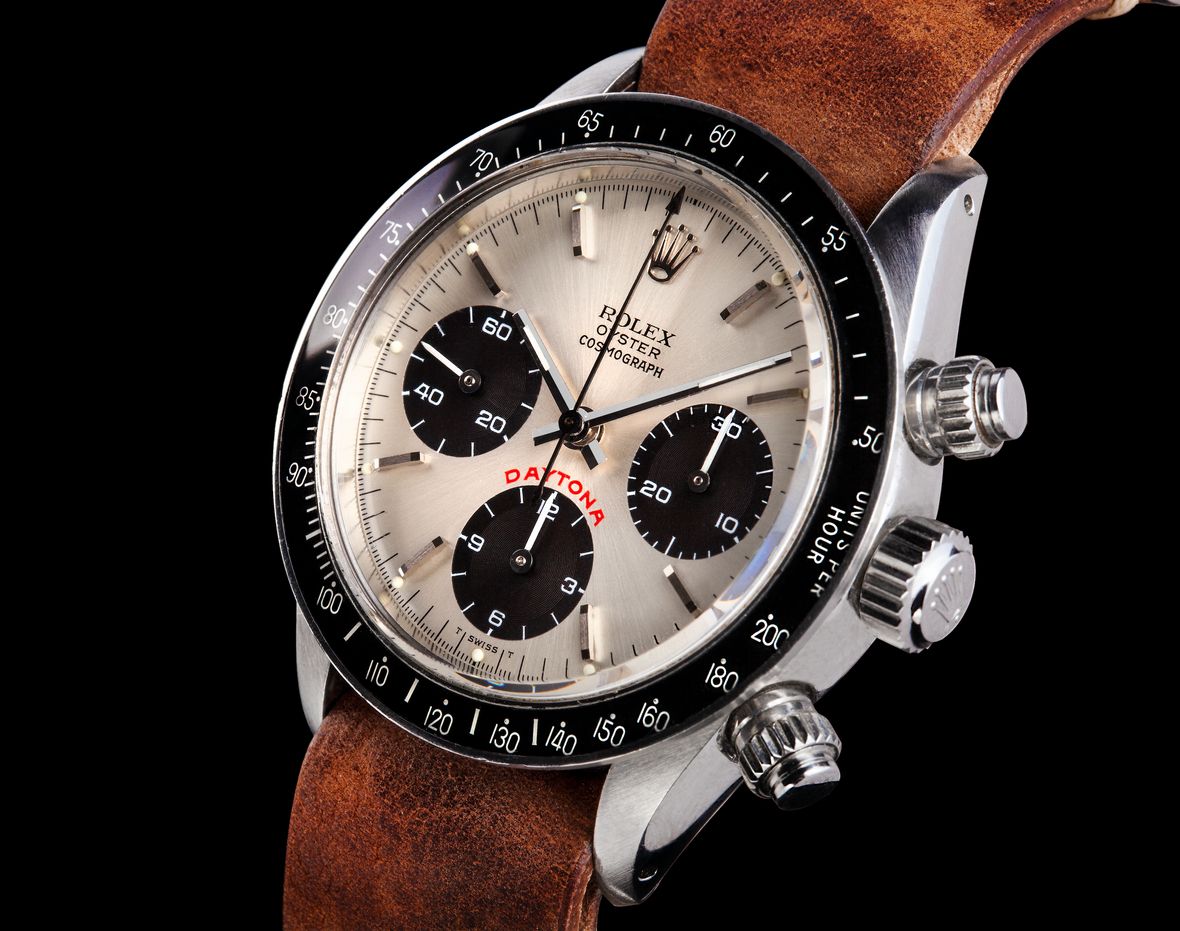 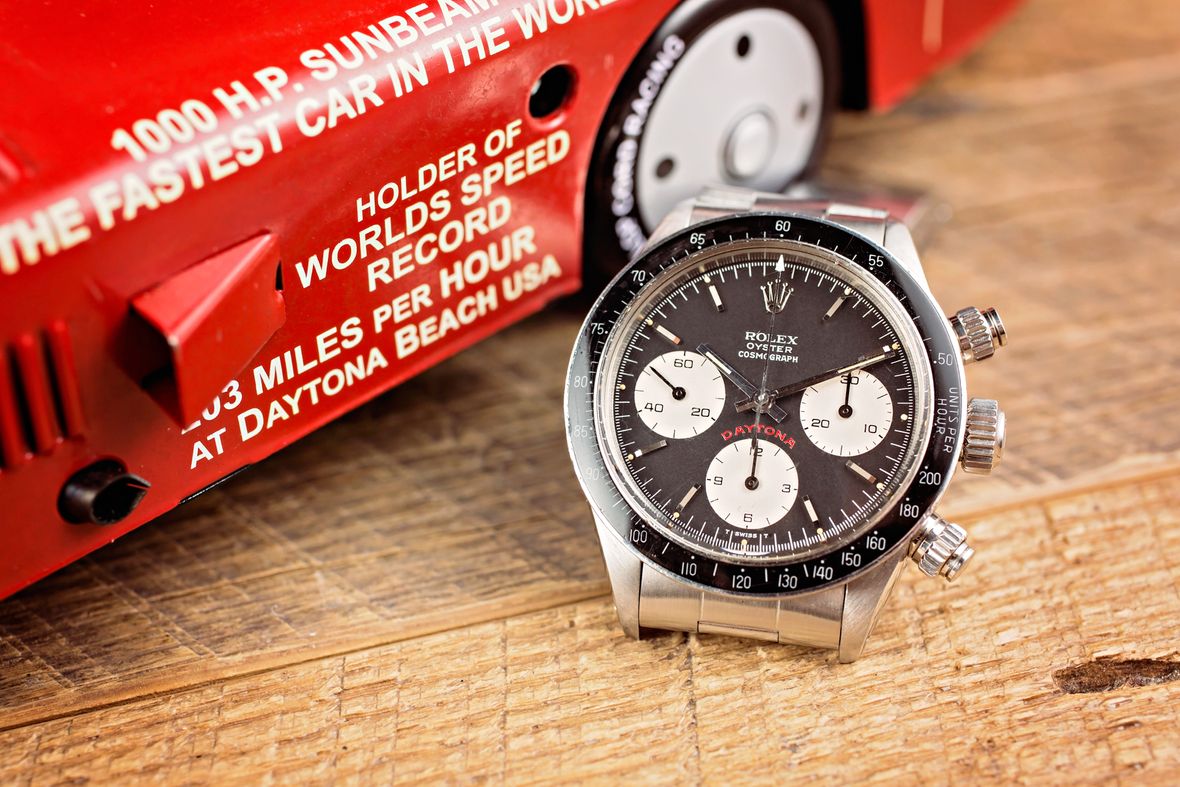 There are icons among icons. It is fair to say that within the pantheon of the greats, some watches reign supreme. The word iconic is grossly overused in the watchmaking industry, but few would argue it does not apply to models such as the Rolex Submariner, Datejust, or Daytona. However, within each of those families, there are superstars – the legendary references that stand head and shoulders above the rest. These models’ influence echoes down the ages and the Rolex Big Red Daytona 6263 is one of those pieces.

The Rolex Daytona collection was designed with race car drivers in mind and serves as an everlasting symbol of the brand’s ongoing relationship with the world of motor racing. Although universally known as the “Daytona” today, the original 1963 Cosmograph was not known as a Daytona at all; it was only in 1965 that we would start to see the “Daytona” name first appear on the dials and even then, it would be many years before the “Daytona” name would become a standardized presence on all of Rolex’s Cosmograph Daytona watches.

Among the various references of the legendary Rolex Daytona, the ref. 6263 is an important and exceptional model from the first generation of manually-wound Daytona watches. Instantly recognizable, the reference 6263 consistently ranks among the most desirable vintage Daytona models available. It looks equally at home on the wrist today as it did way back when it was first released in the early 1970s, further underlying the timeless appeal of the Rolex Cosmograph Daytona. 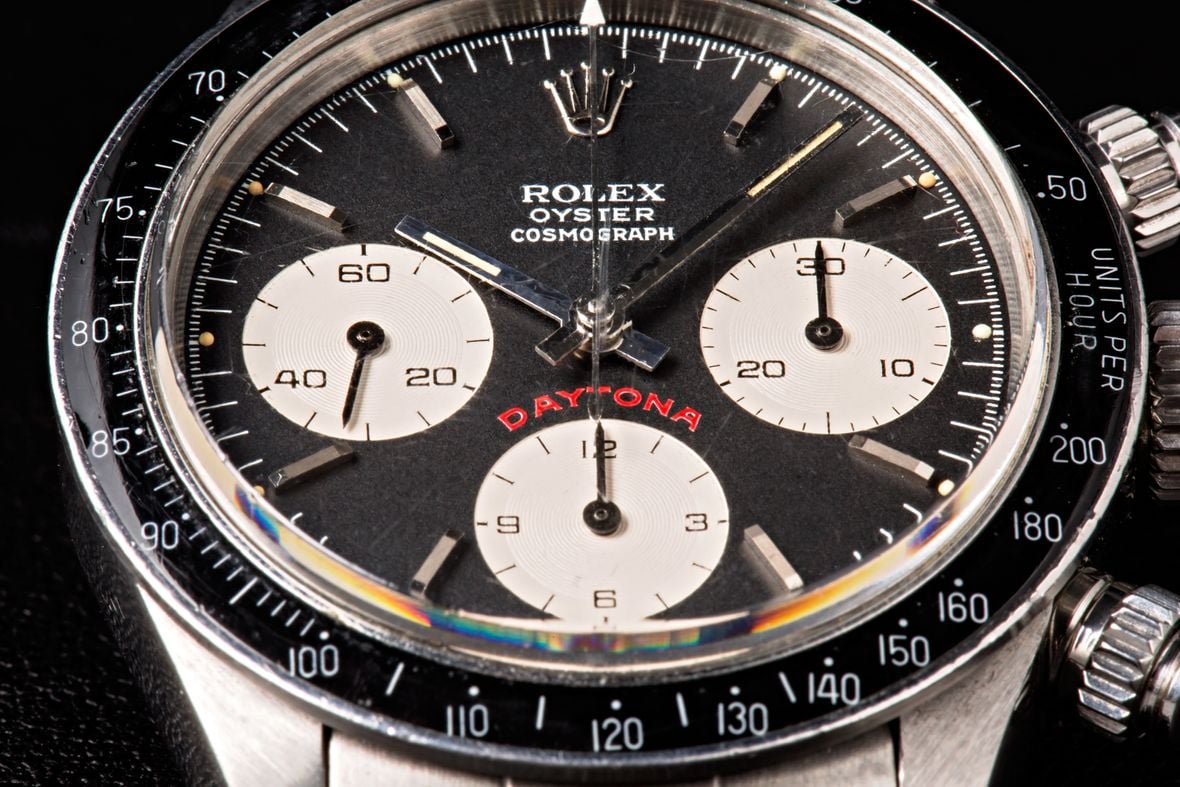 Although the reference 6263 Daytona watches fitted with exotic Paul Newman dials receive the lion’s share of the press attention and sell for truly astronomical prices whenever they manage to surface at auction, the “Big Red” is another dial variation of the iconic reference 6263 Daytona that is frequently sought-after by vintage Rolex collectors. Offered in either black or silver with contrasting colors for the sub-dials/chronograph registers, the reference 6263 “Big Red” gets its name from the bright red “Daytona” name that appears in an extra-large font, right in the center of the dial above the sub-dial at 6 o’clock.

Contrasting colors – either light dials with dark counters or dark dials with white counters – was important to the Rolex Daytona collection for both practical and aesthetic reasons. In terms of practicality, inversely colored sub-dials allow for easier at-a-glance readability for the wearer. Regarding the aesthetic side of this design decision, the contrasting elements were a departure from the existing monochromic Rolex chronograph dials and offered users a more modern and sporty overall appearance while still remaining a classically styled vintage sports watch. 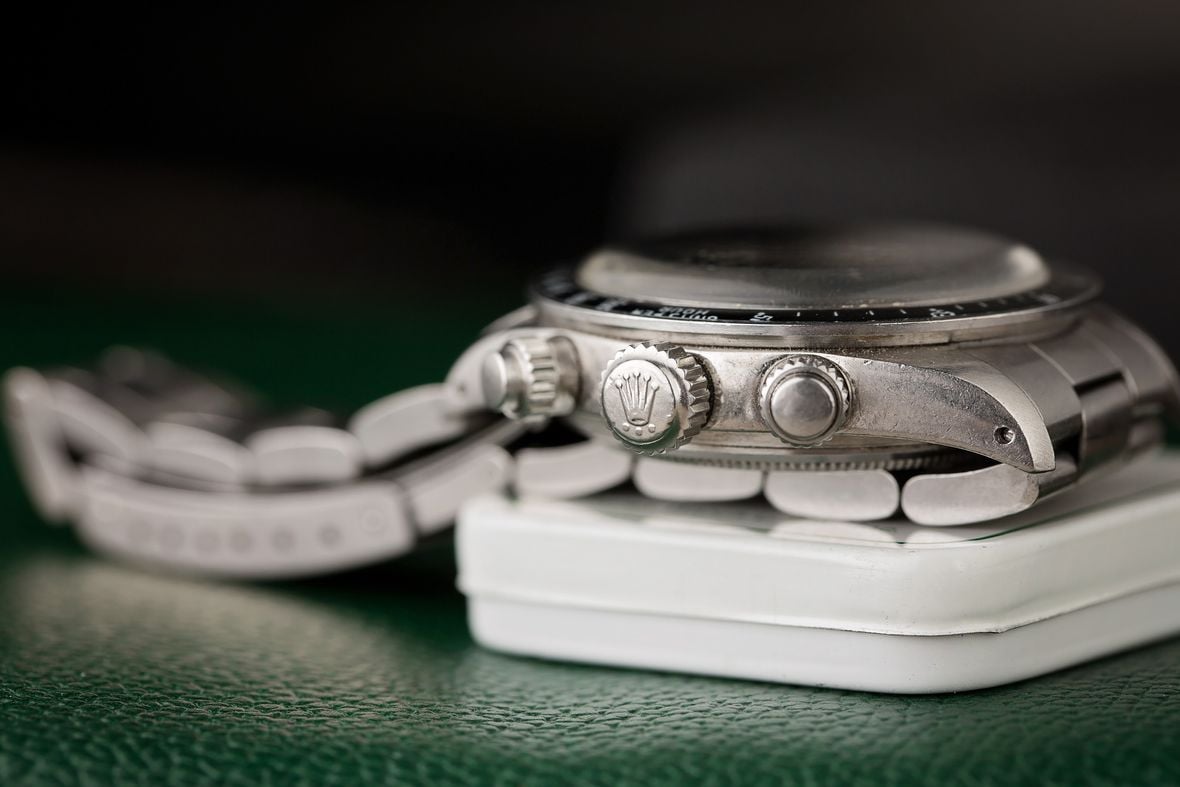 One of the defining characteristics of the reference 6263 Rolex Daytona is its black acrylic bezel with a tachymeter scale. Throughout the history of the Cosmograph Daytona, most references have been fitted with metallic bezels (made from either stainless steel or yellow gold). However, the black acrylic bezel on the reference 6263 adds a ring of dark color around the face of the watch, significantly changing the overall aesthetic and giving it a slightly larger appearance than its metal bezel counterparts. The iconic stainless steel Oyster bracelet that tops off the ref. 6263 “Big Red” Daytona completes the timeless allure of this legendary racing chronograph.

On the original 1963 Cosmograph watch, Rolex used pump pushers, but later the brand introduced screw-down chronograph pushers to offer increased water resistance. As one of the later models from the first generation of the Rolex Cosmograph Daytona, the ref. 6263 is indeed equipped with the screw-down style of chronograph pushers, in addition to a solid screw-down case-back and a waterproof screw-down winding crown. The screw-down pushers resulted in the presence of the label “Oyster” on the dial of the watch as a way to denote its superior water resistance. The Rolex “Big Red” Daytona Ref. 6263 is powered by a Valjoux-based manually wound chronograph movement as the brand did not introduce an automatic-winding movement to the Daytona collection until the Zenith-powered generation arrived in 1988.

Technical, sporty, and (most importantly) a true vintage masterpiece, the reference 6263 “Big Red” is a bonafide industry classic, and the ongoing popularity of the “Big Red” Daytona is a testament to its timeless appeal and ageless charm. There are certainly other vintage Rolex Daytona watches that are worth more or are more difficult to find, but the Daytona 6263 “Big Red” is a classic and likely one of the first watches that comes to mind whenever the words, “vintage Rolex Daytona” are mentioned. An important player in Rolex’s illustrious racing heritage and the evolution of the Rolex Cosmograph Daytona collection as a whole, the reference 6263 is a quintessential example of a purpose-built vintage sports watch. 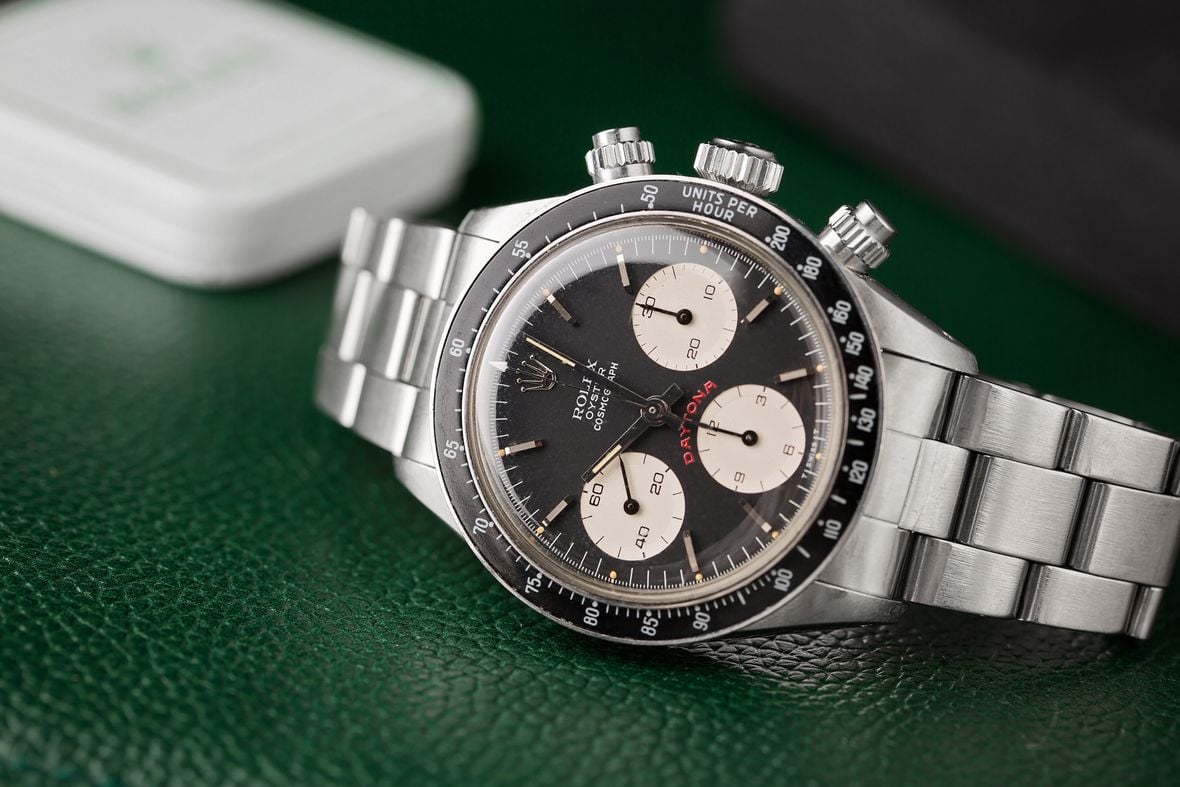 The Rolex Daytona 6263 “Big Red” would be the ideal watch to pair with a Porsche 911 or Ferrari of a similar vintage. However, “Big Red” Rolex Daytona watches aren’t exactly easy to come by, and an auction is often your best bet of acquiring one these days. They usually carry pre-sale estimates of somewhere in the neighborhood of $50,000 (at an absolute minimum), which may seem like a lot until you compare it with a Paul Newman dial model, which will run you a minimum of six figures and potentially up to several million dollars.

Part of what makes the reference 6263 “Big Red” so collectible is that it is an undeniably vintage watch and possesses a number of traits such as its acrylic crystal and manually-wound chronograph movement that firmly classify it as a vintage timepiece that was produced during the golden era of Rolex tool watches. However, the reference 6263 “Big Red” Daytona represents the perfect blend of both modern and vintage Rolex chronograph characteristics. The reference 6263 is equipped with a screw-down crown and chronograph pushers – something that is found on later-era Rolex Daytona references; however its 37-millimeter case diameter, manually wound Valjoux-based movement and acrylic crystal make it an unmistakably vintage timepiece.

The current-production stainless steel Rolex Daytona with ceramic bezel (reference 116500LN), draws heavily on the design of the reference 6263. Not only are the screw-down chronograph pushers and red “Daytona” name shared between the two watches, but also the black Cerachrom bezel on the present-day Daytona 116500LN is more than a little reminiscent of the black acrylic bezel that was fitted to the reference 6263; however, it presents the style in a thoroughly modern overall package.

The Rolex Daytona is one of the most collectible watches of all time, and the reference 6263 ranks among one of the most desirable vintage references for collectors to own. Although the “Big Red” is not the absolute most rare or valuable iteration of the Rolex Daytona – that would be one with a “Paul Newman” dial – the reference 6263 “Big Red” is easily one of the most iconic, and it sits at the crossroads where vintage meets modern within the first generation of manually-wound Daytona watches, right before the Daytona began to take its contemporary form. 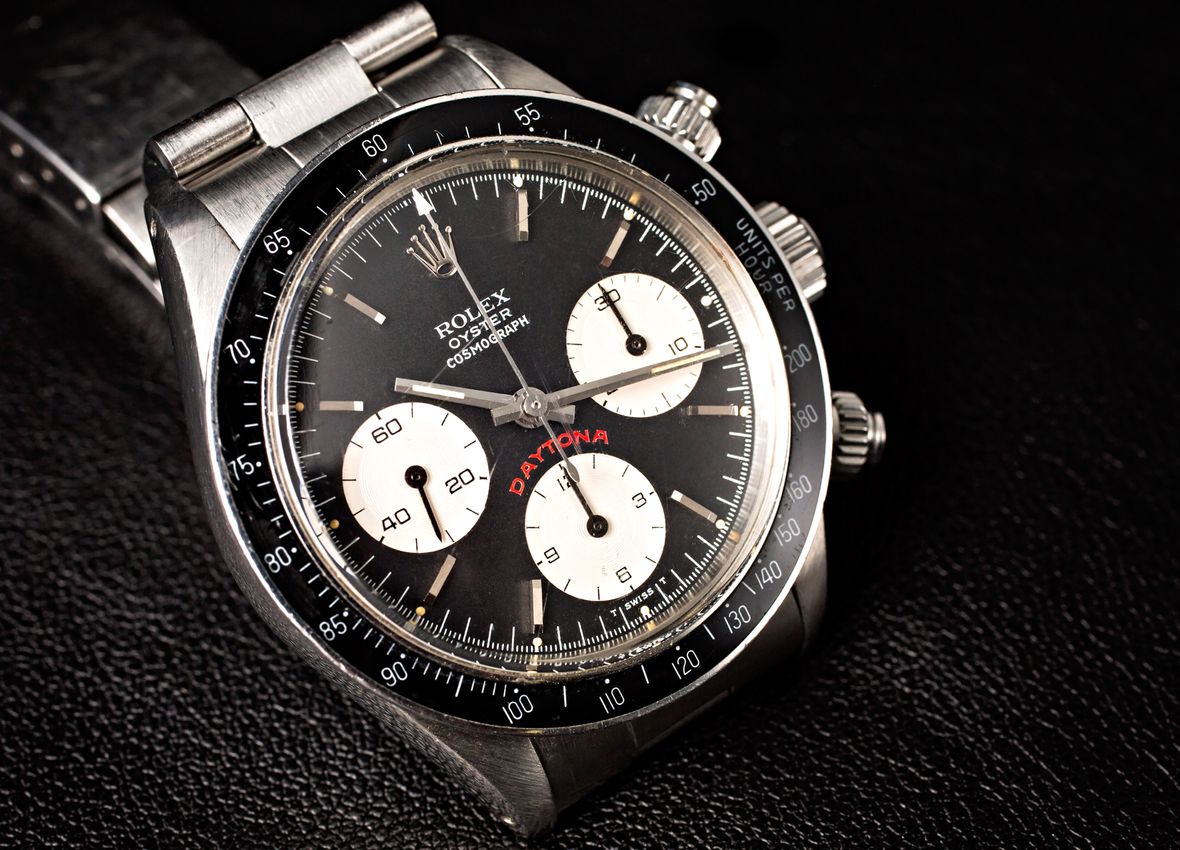