The Rolex Milgauss is a cult favorite among collectors in the know. It boasts everything many luxury watch enthusiasts seek, including the exclusivity of the Rolex brand, a versatile design set, and intriguing heritage, complete a triumphant return to the market after a lengthy hiatus. It’s a unique take on the traditional Rolex tool watch that offers the functionality of a professional series watch while also somewhat resembling a dress watch. Really, what isn’t there to love?

If you’re interested in learning more about Rolex’s iconic anti-magnetic scientist’s watch, you’ve come to the right place. In this guide, we will cover everything you need to know about the Milgauss 116400 before you invest, including its history, variations, price, and where to buy it.

Click here for our Ultimate Buying Guide on the Rolex Milgauss.

During the 1950s, electricity became a standard presence throughout the modern industry. Many individuals found that the electromagnetic fields emitted by the equipment in their work environments significantly disrupted the timekeeping of their wristwatches. At the time, ordinary mechanical watches could have their accuracy affected by magnetic fields as little as 50 to 100 gauss. However, many scientists and medical professionals were exposed to much greater magnetic fields throughout their everyday work.

Rolex’s solution arrived in the 1950s and came in the form of the Milgauss, whose name was a combination of the words mille (Latin for a thousand) and gauss (the unit of measurement for magnetic fields). By encasing the movement within a Faraday cage, potentially harmful electromagnetic charges were redistributed throughout the cage’s conducting material, thus neutralizing their effects inside the cage. The stainless steel used on the case is also slightly thicker when compared to other Rolex sports models, further protecting the movement within.

Although the concept of the Faraday cage was hardly new technology, its implementation in wristwatches was a relatively new convention; and with the ability to withstand electromagnetic forces greater than 1,000 gauss, the Milgauss became known as the watch for scientists. 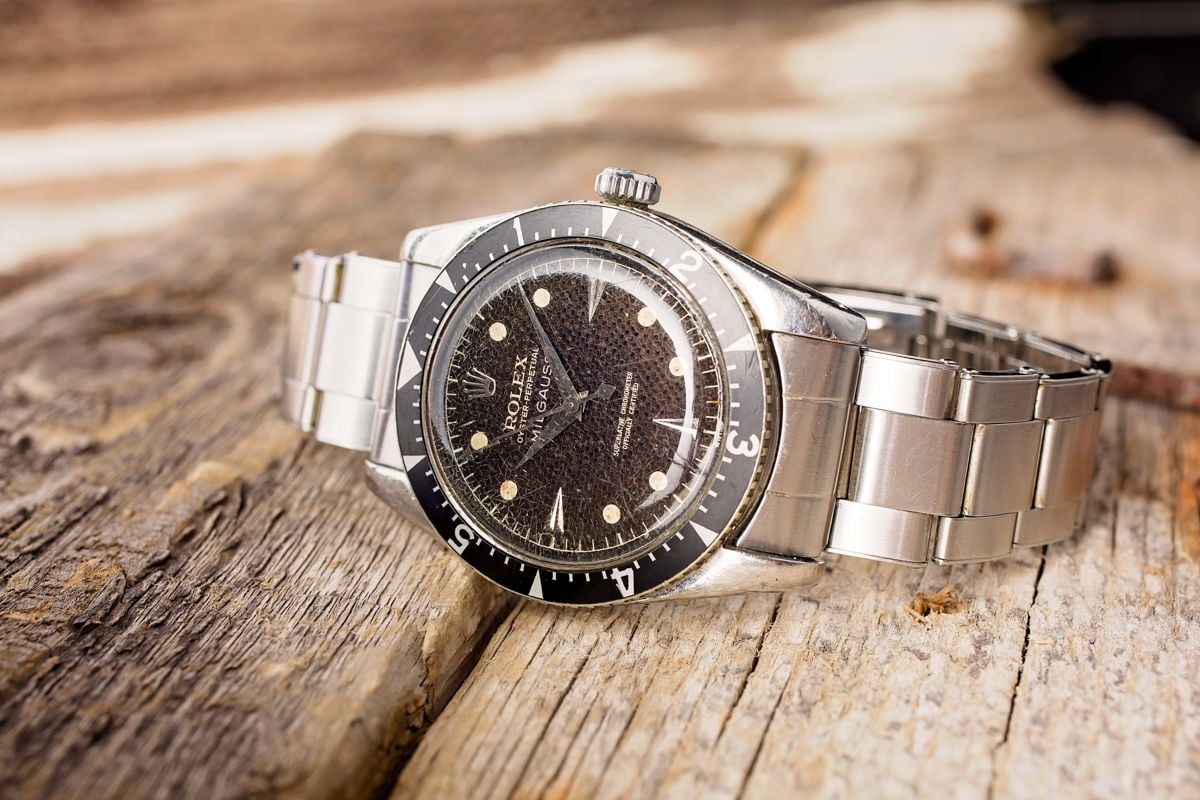 The first iteration of the Milgauss came to market in 1956 via ref. 6543. Rolex only produced about 150 examples of the watch before it was quickly replaced by ref. 6541 that same year. Reference 6541 was the first commercially produced Milgauss and remained in production for only four years before being discontinued in 1960. Much like the reference 6543 that preceded it, reference 6541 was essentially a modified version of the original Rolex Turn-O-Graph. It featured a 38 mm stainless steel case with a black “honeycomb” dial and a rotating timing bezel and somewhat resembled the Submariner. Additionally, reference 6541 was the first watch to feature the now-iconic, lightning bolt-shaped seconds hand, which has since become the defining characteristic of the Milgauss line.

Since the internal Faraday cage provided the Milgauss with its antimagnetic capabilities, the various self-winding movements used to power early Milgauss references did not need to possess any antimagnetic properties of their own. The original reference 6541 is emblematic of a time in Rolex’s history when the company was first starting to experiment with watches engineered for specific professional uses. Its design is highly derivative of other early Rolex sport watches. It perfectly represents how Rolex did not yet have a definitive vision for what they wanted the Milgauss to be 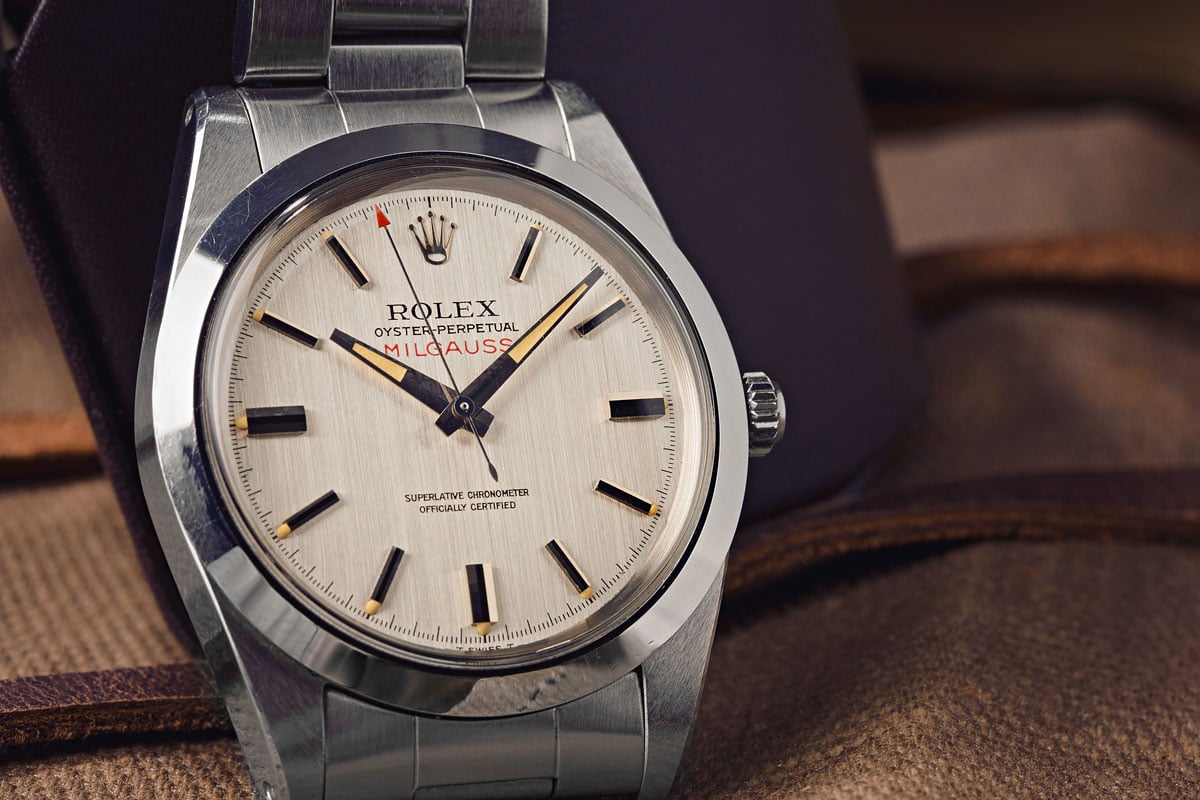 Reference 1019 hit the market in 1960. It followed an entirely different design code than its predecessors, opting for a smooth bezel and stick hour markers instead of the rotatable bezel and round luminous hour markers used on references 6543 and 6541. The charming lightning bolt seconds hand is also gone, with a red arrow-tipped seconds hand taking its place. Additionally, the collection became available with either a black or silver dial for the first time in Milgauss history. Rolex also upgraded the movement, replacing the cal. 1080 powering the first two iterations of the Milgauss with an improved cal. 1580 and bringing with it a hacking seconds function.

There are also rare editions of the ref. 1019 referred to as “CERN dial” Milgauss watches produced at the behest of CERN scientists. These examples don’t feature any lume on the dial. This is because the slightly radioactive properties in the Tritium material on the hands and hour markers interfered with their laboratory equipment. These are among the rarest reference 1019 watches on the secondary market.

The Rolex 1019 Milgauss is held in high regard by many avid vintage luxury watch collectors. It remained in production until 1988 and is relatively easy to find on the pre-owned level. When it was discontinued in the late 1980s, so was the entire Milgauss collection. 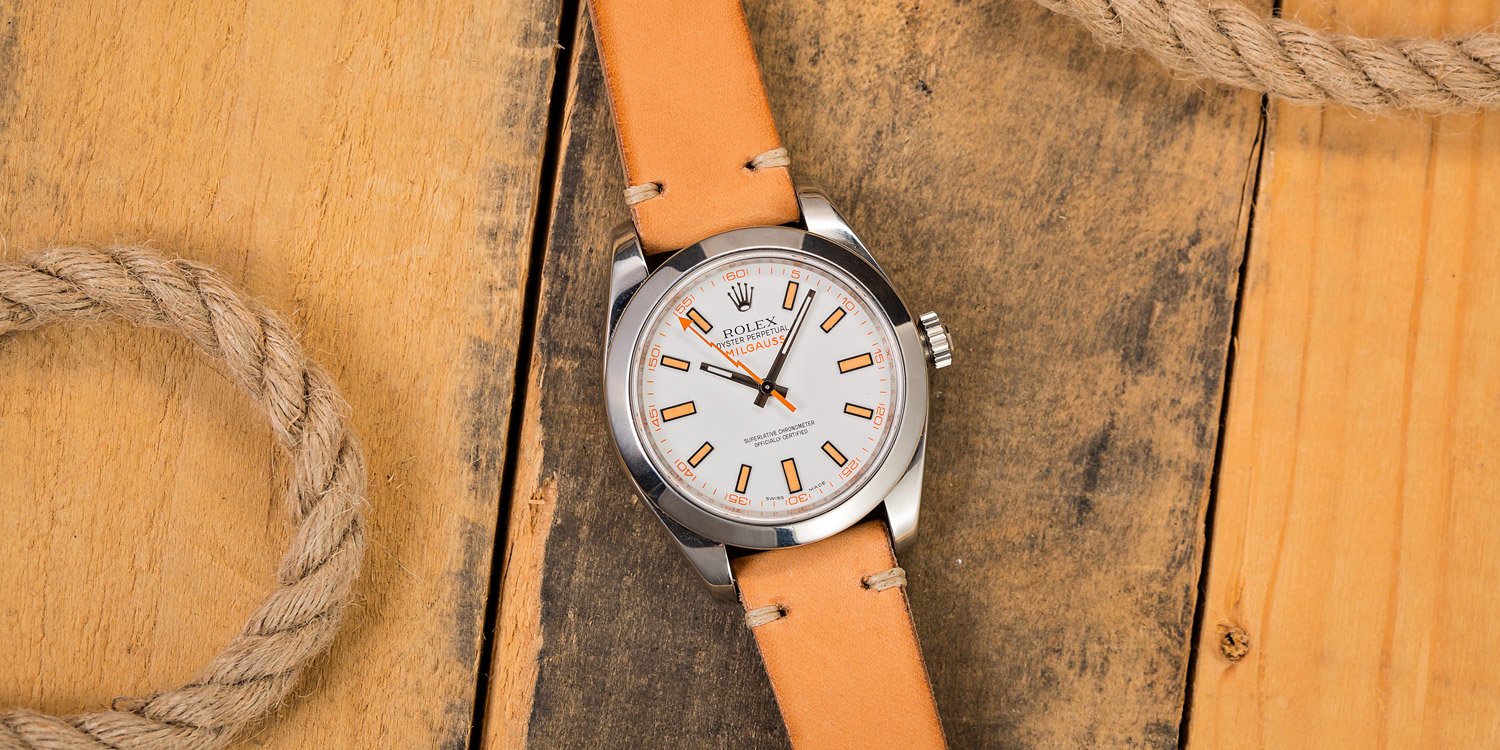 After a nineteen-year absence from the Rolex catalog, the Milgauss line returned for Baselworld 2007 with the reference 116400. As the story goes, it was released the same year that the CERN Large Hadron Collider was completed. The newly redesigned case saw an increase in size to 40 mm in diameter, and the watch was fitted with a fixed, smooth bezel proportional to the rest of the case. In contrast to Rolex’s traditionally sober and classical aesthetic, the reference 116400 has a rather bold and playful design, featuring bright orange accents, which extend to its signature, lightning bolt-shaped seconds hand. 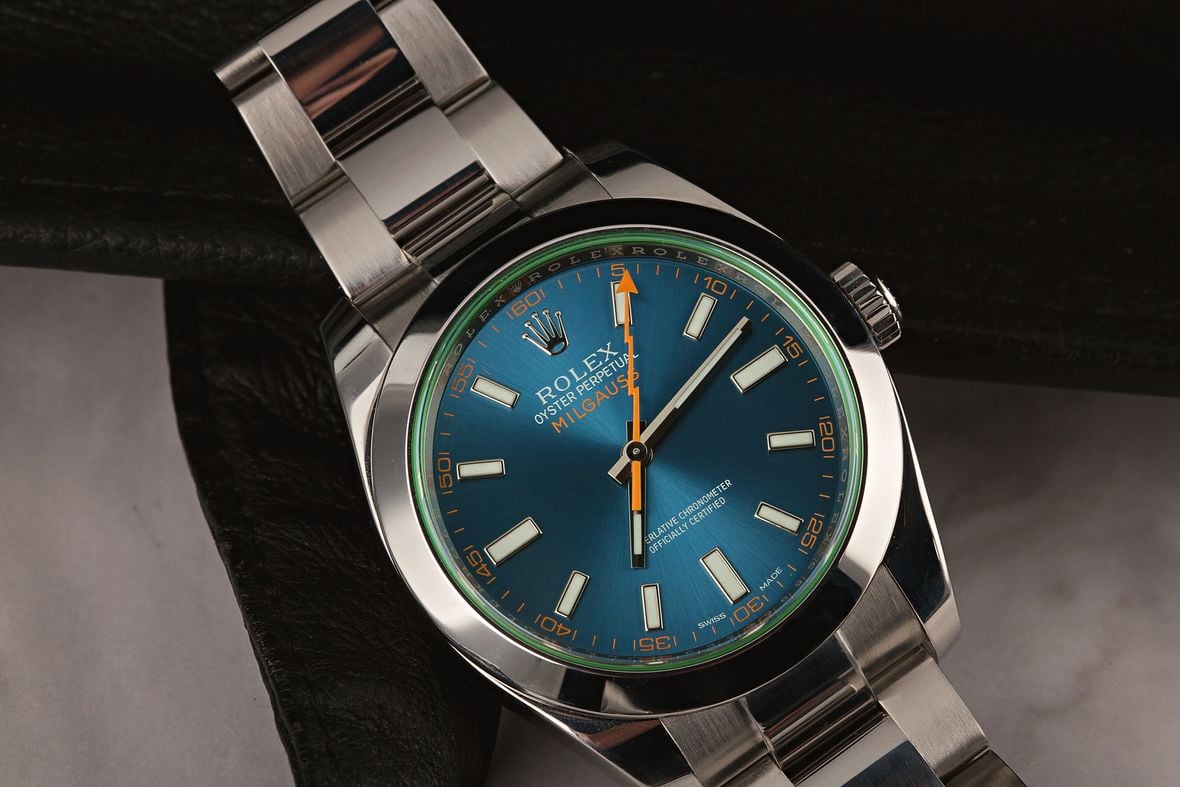 Upon its initial release, the reference 116400 was sold in three variations – black or white dials topped with a clear sapphire crystal or a black dial with a green “Glace Verte” sapphire crystal. Today, all reference 116400 watches are fitted with green-tinted sapphire crystals, which Rolex does not do on any other watch, and the reference number has been updated to 116400GV to reflect the presence of green sapphire. Additionally, the white dial option has been discontinued, and instead, the Milgauss ref. 116400 can be purchased with either an electric blue dial coated in zirconium that Rolex aptly calls “Z-blue” or a black dial with luminescent orange hour markers that first appeared on the anniversary edition of the Milgauss.

Inside the reference 116400 beats Rolex’s 31-jewel, caliber 3131 movement, which features components made from antimagnetic materials for greater resistance to potentially disruptive forces. The caliber 3131 uses Rolex’s proprietary, blue Parachrom hairspring, made from a paramagnetic alloy that includes niobium and zirconium and is entirely insensitive to magnetic fields. Additionally, the escape wheel and pallet fork on the caliber 3131 are made from amorphous nickel-phosphorus, which is also entirely antimagnetic.

The Rolex Milgauss: Then and Now 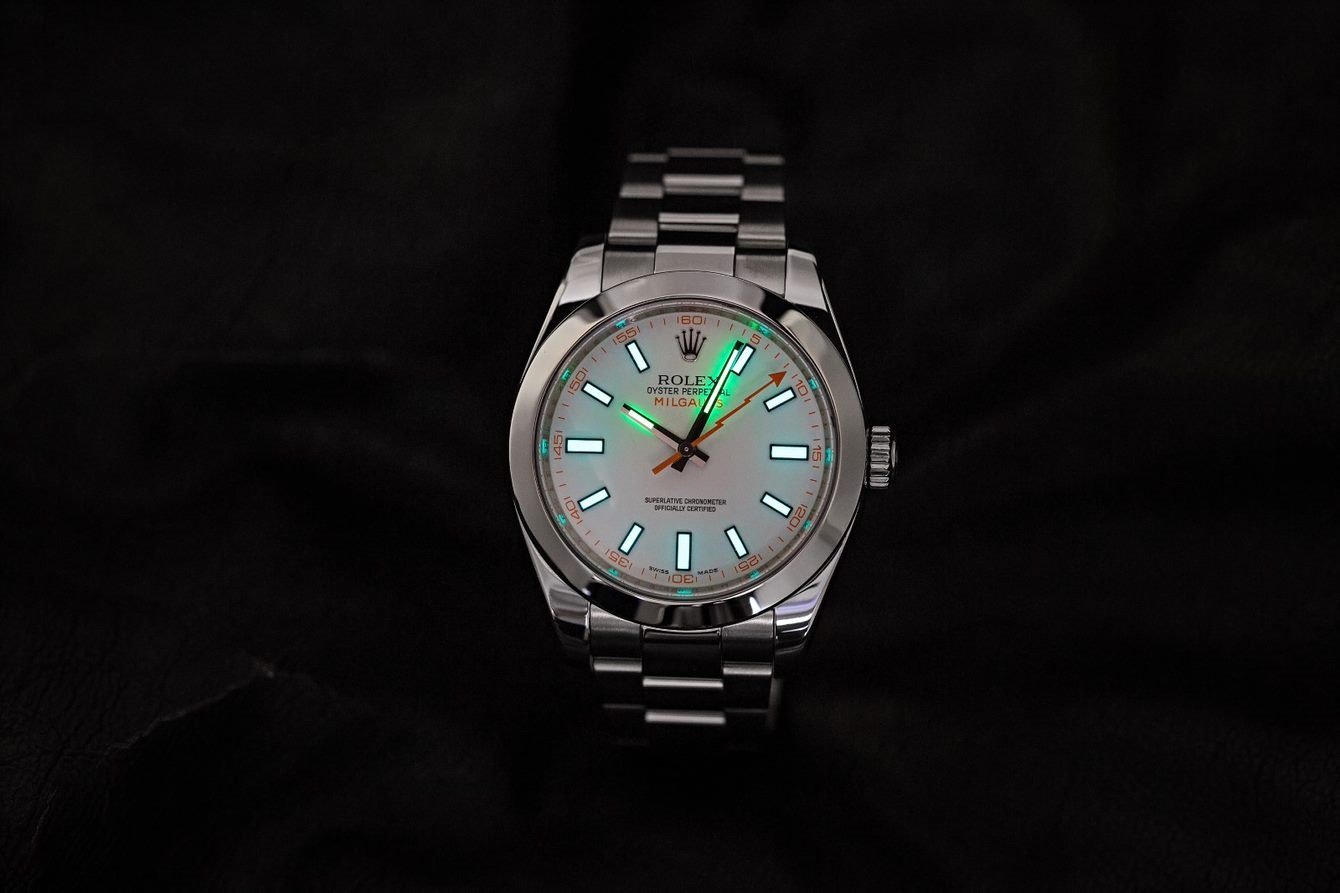 Many of Rolex’s most iconic watch collections receive praise for the consistency of their designs; however, the Milgauss represents the other side of things. Despite both being antimagnetic wristwatches with time-only displays and lightning bolt-shaped seconds hands, the reference 6541 and the reference 116400GV could not look any more different from one another. While it may not have the same longstanding consistency in its appearance as the Submariner or the Day-Date, the Milgauss ref. 116400 serves as the perfect example of just how much a Rolex watch can change and evolve over the years.

How much is the Rolex Milgauss? The current retail price is $8,300. While it doesn’t offer the same bells and whistles as, say, the stainless steel Submariner, which retails for $8,100, it isn’t at the bottom level of Rolex’s professional series price range either. That honor goes

The Milgauss doesn’t have a rotatable bezel or an extra hand on the dial for dual time-keeping like other Rolex models. However, it’s still an incredibly sophisticated and functional watch featuring an innovative Faraday cage and a movement that is highly resistant to electromagnetic fields. On the pre-owned level, one can expect to pay around $12k or $13k for the Rolex Milgauss.

Where Can I Buy the Rolex Milgauss?

Stainless steel Rolex tool watches are some of the most desirable luxury watches in the entire world. As a result, they are often sold out at authorized dealers. Unless you have an “in” with your local AD, it can be next to impossible to purchase the Milgauss for the retail price. If you’re interested in adding one to your collection right now, pre-owned is the best option.
Bob’s Watches is the world’s premier used Rolex exchange. We have the largest inventory of secondhand Rolex Milgauss 116400 watches ready to purchase right now. Each watch is certified pre-owned to guarantee its authenticity and is competitively priced. You can rest assured that you are getting an excellent deal when you shop at Bob’s Watches. Although it was absent from the Rolex catalog for several decades, the Milgauss has proven that it is still a valuable collector’s item that we expect will hold its value long term.