During the 1950s, electricity became a standard presence throughout modern industry, and many individuals found that the electromagnetic fields emitted by the equipment in their work environments significantly disrupted the timekeeping of their wristwatches. At the time, ordinary mechanical watches could have their accuracy affected by magnetic fields as little as 50 to 100 gauss; however many scientists and medical professionals were being exposed to much greater magnetic fields throughout the course of their everyday work.

Rolex’s solution arrived in 1954, and came in the form of the Milgauss, whose name was a combination of the words, mille (Latin for a thousand) and gauss (the unit of measurement for magnetic fields). By encasing the movement within a Faraday cage, potentially harmful electromagnetic charges were redistributed throughout the cage’s conducting material, thus neutralizing their effects inside the cage. Although the concept of the Faraday cage was hardly new technology, its implementation in wristwatches was a relatively new convention; and with the ability to withstand electromagnetic forces greater than 1000 gauss, the Milgauss became known as the watch for scientists.

The first commercially produced Milgauss was the reference 6541, which was released to the public in 1956 and remained in production for only 4 years before it was discontinued in 1960. Much like the reference 6543 that preceded it, the reference 6541 was essentially a modified version of the original Rolex Turn-O-Graph, and featured a 38 mm stainless steel case with a black “honeycomb” dial and a rotating timing bezel. Additionally, the reference 6541 was the first watch to feature the now-iconic, lightning bolt-shaped seconds hand, which has since become the defining characteristic of the Milgauss line.

Since the internal Faraday cage provided the Milgauss with is antimagnetic capabilities, the various self-winding movements that were used to power early Milgauss references did not need to possess any antimagnetic properties of their own. The original reference 6541 is emblematic of a time in Rolex’s history when the company was first starting to experiment with watches engineered for specific professional uses. Its design is highly derivative of other, early Rolex sport watches, and it perfectly represents how Rolex did not yet have a definitive vision for what they wanted the Milgauss to be.

After a nineteen-year absence from the Rolex catalogue, the Milgauss line returned for Baselwold 2007 with the reference 116400. The newly redesigned case saw an increase in size to 40 mm in diameter, and the watch was fitted with a fixed, smooth bezel that was proportional in size to the rest of the case. In contrast to Rolex’s traditionally sober and classical aesthetic, the reference 116400 has a rather bold and playful design, featuring bright orange accents, which extend to its signature, lightning bolt-shaped seconds hand. 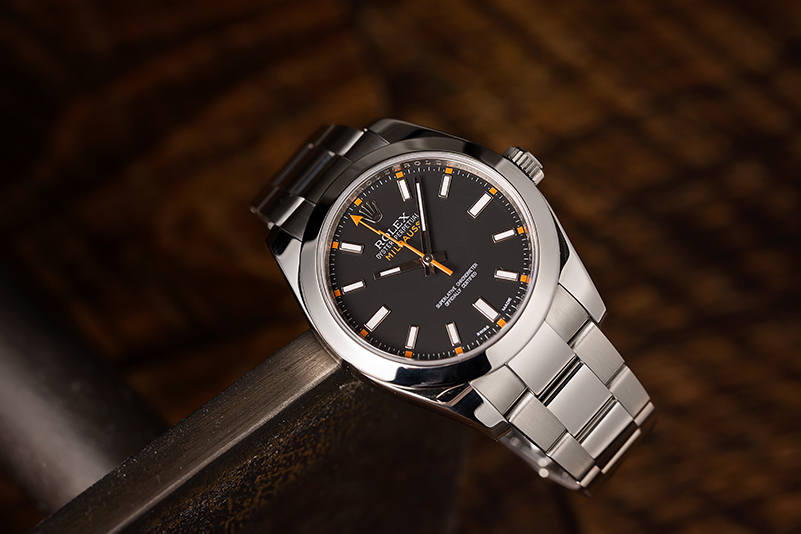 The Rolex Milgauss ref. 116400 was introduced at Baselworld 2007 after a 19 year absence from the catalog.

Upon its initial release the reference 116400 was fitted with a clear sapphire crystal, and buyers were given the choice of either a black or a white dial. Today, all reference 116400 watches are fitted with green-tinted sapphire crystals – something that Rolex does not do on any other watch – and the reference number has been updated to 116400GV to reflect the presence of green sapphire. Additionally, the white dial option has been discontinued, and instead, the Milgauss ref. 116400 can be purchased with either an electric blue dial that Rolex calls, “Z-blue” or a black dial with luminescent orange hour markers that first made an appearance on the anniversary edition of the Milgauss.

Inside the reference 116400 beats Rolex’s 31-jewel, caliber 3131 movement, which features components made from antimagnetic materials for greater resistance to potentially disruptive forces. The caliber 3131 uses Rolex’s proprietary, blue Parachrom hairspring, which is made from a paramagnetic alloy that includes niobium and zirconium and is entirely insensitive to magnetic fields. Additionally, the escape wheel and pallet fork on the caliber 3131 are made from amorphous nickel-phosphorus, which is also entirely antimagnetic.

Many of Rolex’s most iconic watch lines receive praise for the consistency of their designs; however the Milgauss represents the other side of things. Despite both being antimagnetic wristwatches with time-only displays and lightning bolt-shaped seconds hands, the reference 6541 and the reference 116400GV could not look any more different from one another. While it may not have the same longstanding consistency in its appearance as the Submariner or the Day-Date, the Milgauss ref. 116400 serves as the perfect example of just how much a Rolex watch can change and evolve over the years.