Our Top Picks from the Competing GPHG Watches

November will be a jam-packed month for the watch industry. In addition to the Only Watch charity event and Geneva auctions from leading houses like Christie’s, Phillips, and Sotheby’s, November will also see the 2017 edition of the Grand Prix d’Horlogerie de Genève (GPHG). Regarded as the Oscars of the world watch, it’s an ultra glamorous time for leading watch brands to celebrate a job well done. Along with the coveted top prize of the evening, the Aiguille d’Or, there are also 12 other categories. These range from ladies’ watches to men’s sport watches to artistic crafts and others. Here are our favorite nominees from the long list of 2017 GPGH watches.

As far as asymmetrical dials go, no one does it better than German watchmaker, A. Lange & Söhne.

The Lange 1 timepiece is instantly recognizable thanks to its outsize date indication, off-centered hour and minute subdial, small-seconds subdial, and power-reserve indicator. In 2002, the first Lange 1 Moonphase made its debut. Fast-forward to today, A. Lange & Söhne has refreshed the 2017 Lange 1 Moonphase watch. In addition to the new caliber L 121.3, the Lange 1 Moonphase also includes a day/night indicator along with the phases of the moon display. Essentially, the background to the moon either shows bright blue for day or dark blue for night. Mechanically masterful yet beautifully simple to use for the wearer! 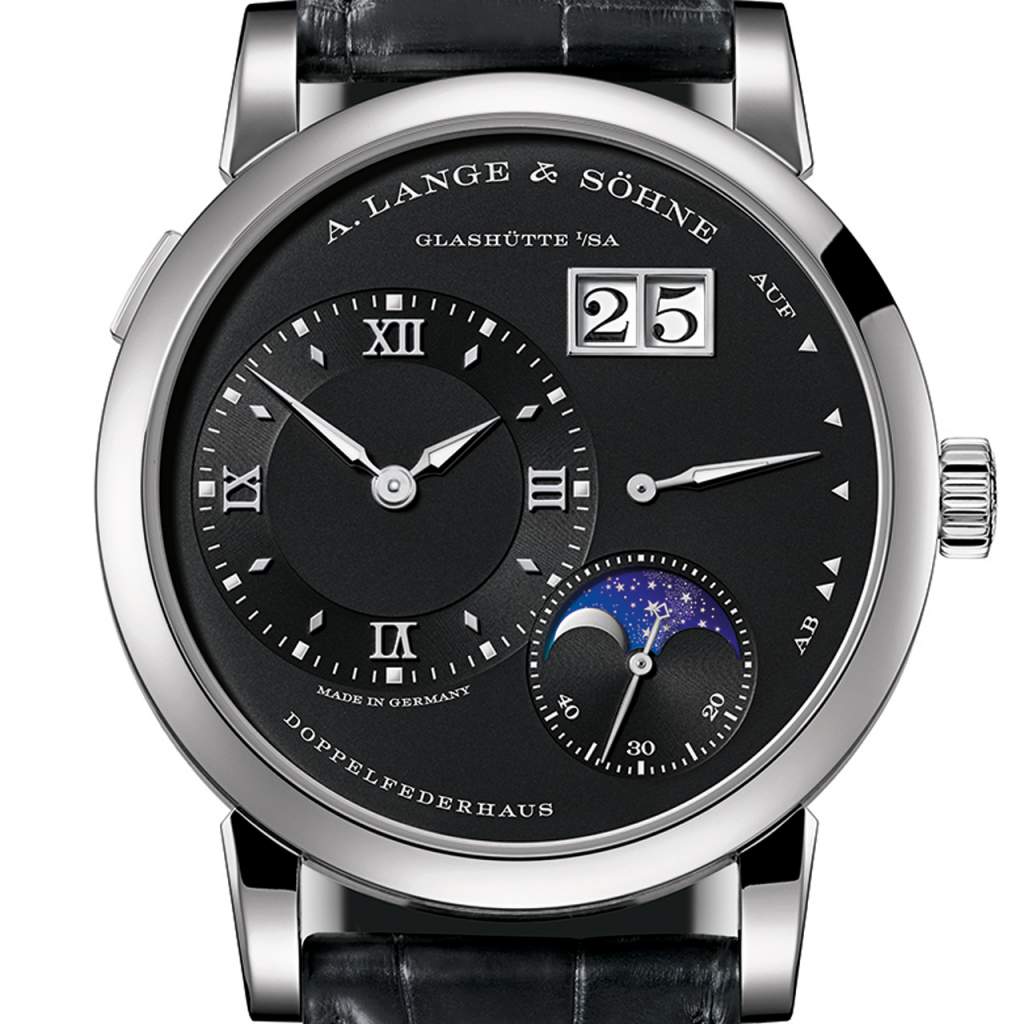 The A. Lange & Söhne is a watch is an amazing timepiece for its capabilities. (Credit: gphg.org)

The new ingenious mechanism is housed in a 38.5mm round case crafted in either white gold, pink gold, or platinum.

As one of the big highlights of SIHH earlier this year, it comes as no surprise that the unlike other watches from the AP collection the Audemars Piguet Royal Oak Perpetual Calendar in black ceramic is a nominee at the 2017 GPGH awards.

Given the perpetual calendar is a signature watch complication of Audemars Piguet, it’s only natural for the Swiss watchmaker to pair it with their iconic Royal Oak timepiece. And this year’s iteration of the Royal Oak Perpetual Calendar is particularly special. This is the first time Audemars Piguet unveils a full black ceramic timepiece. From its 41mm case to its famous integrated bracelet, the high-tech material suits the Royal Oak Perpetual Calendar perfectly. 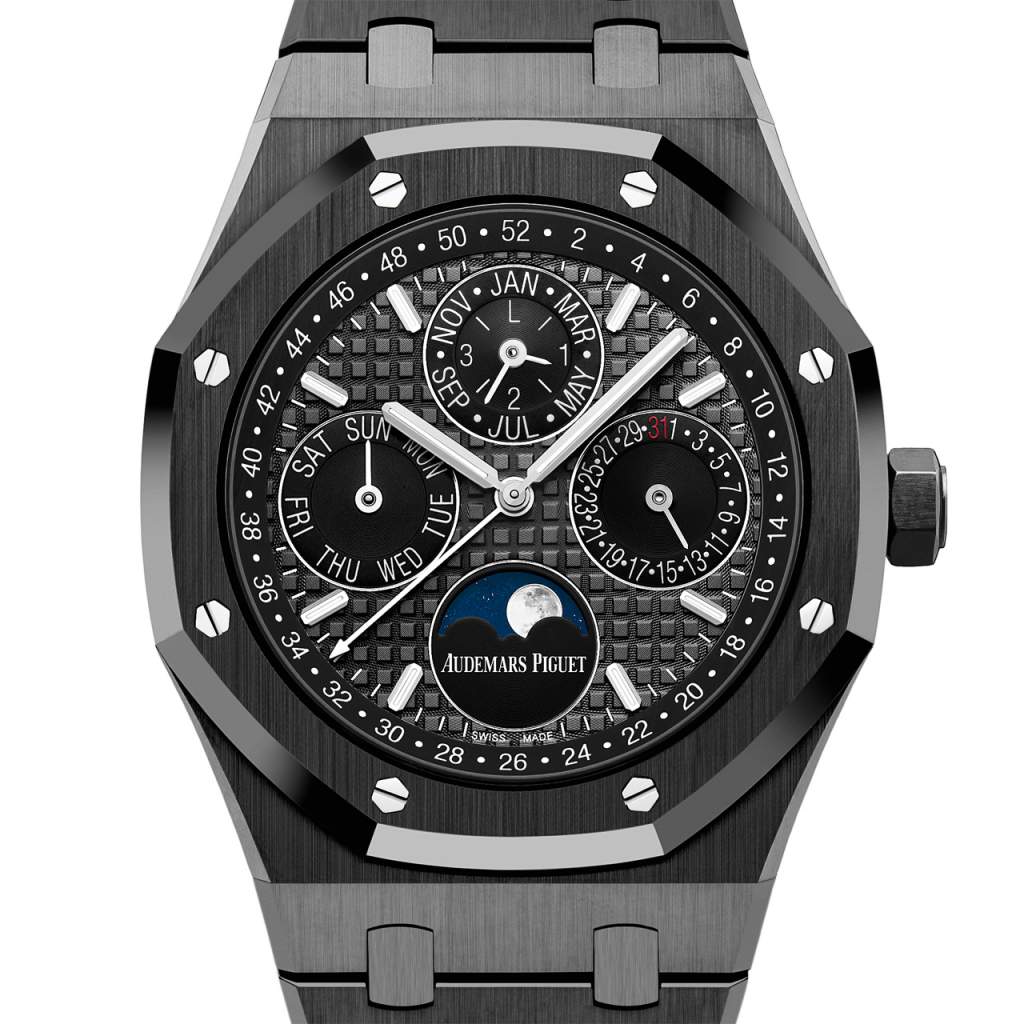 Not only is black ceramic spectacular to look at, especially in Royal Oak form, it’s also highly resistant to scratching and fading, therefore, making this an especially robust luxury sports watch.

Powering this ultra-thin Bulgari timepiece is the in-house BVL 138 automatic movement, which even boasts 60 hours of power reserve. Encasing the 2.23mm Bulgari caliber is a titanium 40mm case sporting a distinct faceted shape. 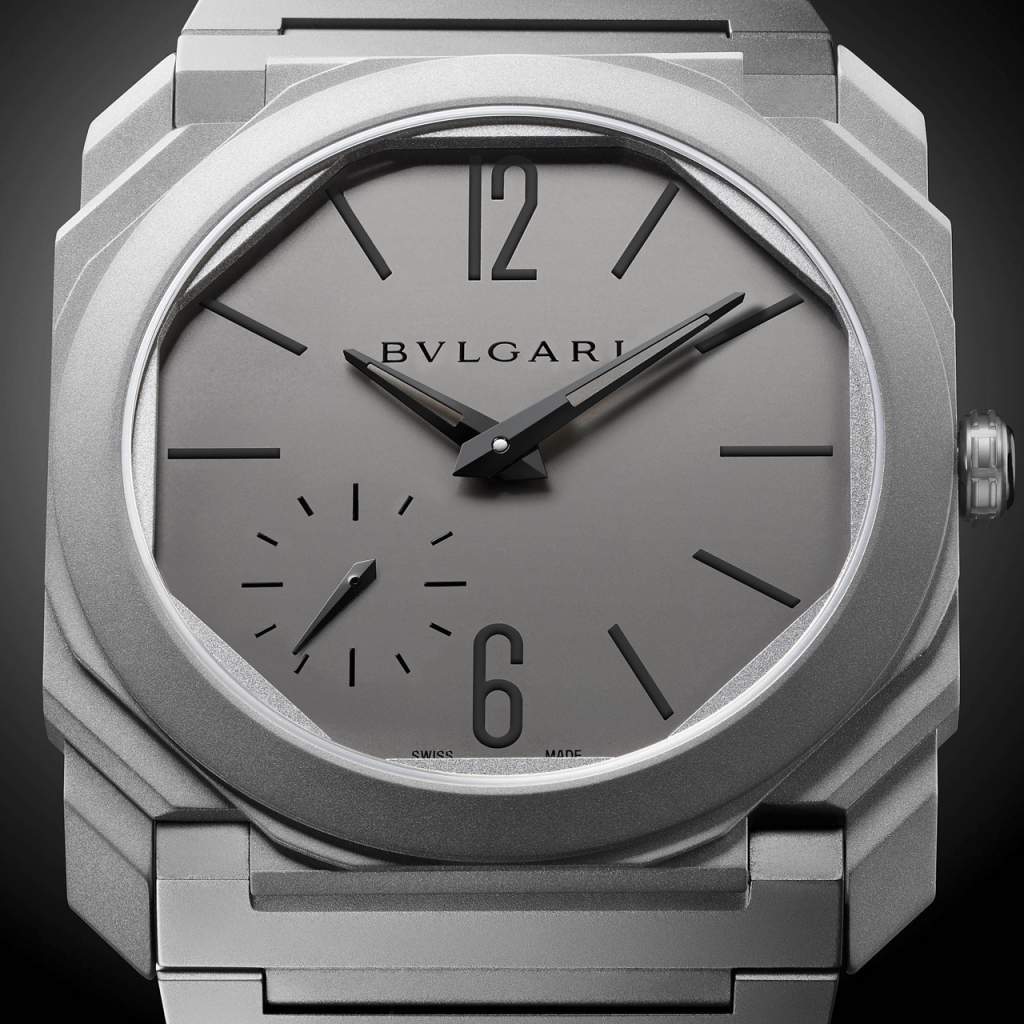 For 2017, TAG Heuer revived the legendary Autavia watch, originally designed by Jack Heuer in 1962. The revival of the contemporary Autavia 42 was the result of the “Autavia Cup” online competition. With 16 vintage Heuer models pitted against each other,  web users overwhelming voted to bring back the Autavia “Rindt.” This may not be in the new Kingsman Movie, but it is still certainly good for any Heuer fan.

While it’s a clear tribute to vintage Heuer chronographs, the Autavia 42 is a contemporary watch. From its generous 42mm stainless steel case to its automatic Heuer-02 movement to its revamped bezel to the inclusion of the date window, the 1960’s Autavia is now ready for today’s tastes. 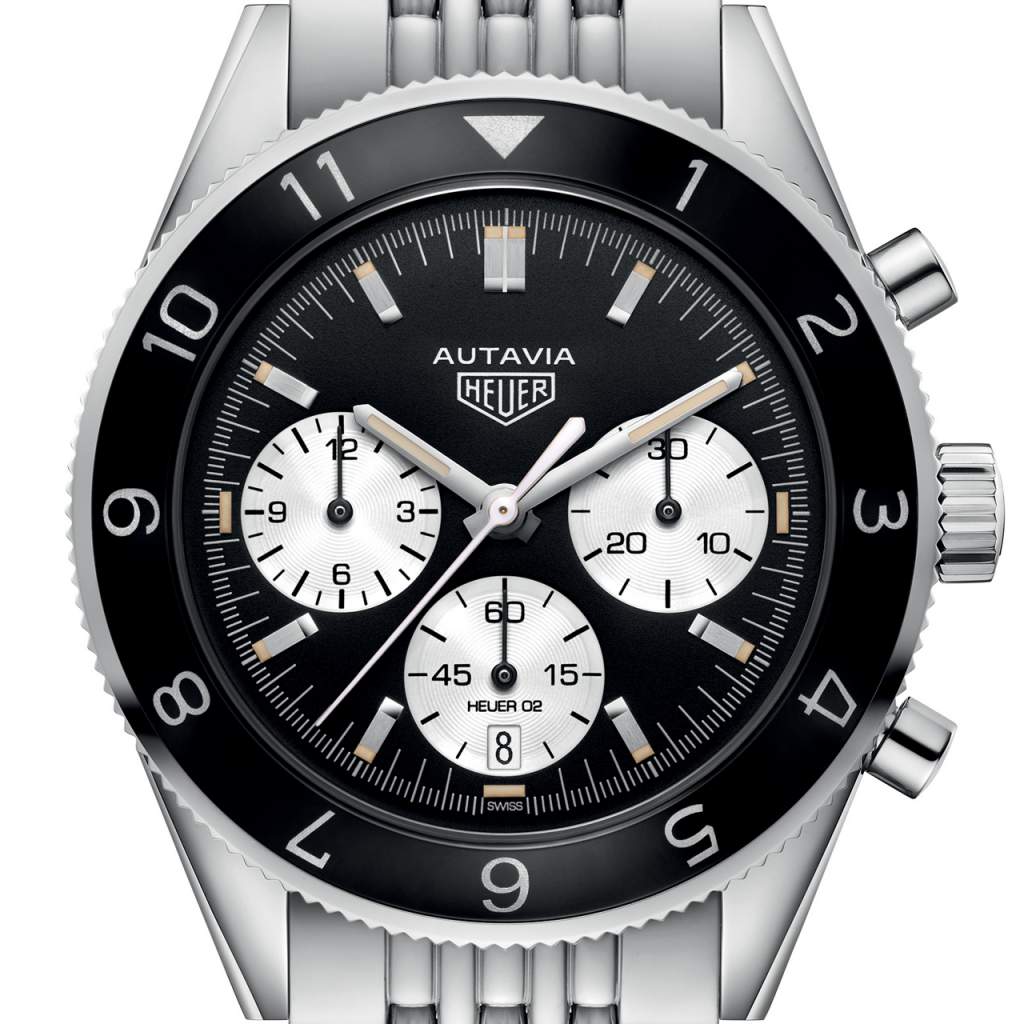 While this Heuer may not be featured in the Kingsman film, it is still an amazing timepiece. (Credit: gphg.org)

Equipped with modern practicality, the vintage-inspired Autavia 42 is a strong contender for a 2017 GPHG watch award.

Perhaps the most low-key submission to the GPHG awards is Tiffany & Co.’s Tiffany Square timepiece. Not low-key because of its appealing looks, but more so because Tiffany & Co. hasn’t officially announced this model yet.

While the Tiffany Square watch is brand new, its classic Art Deco style hails from another era. It’s a commemorative timepiece in honor of the company’s 180th year anniversary. The 29mm yellow gold square slim case contains a hand-wound movement. In fact, this is Tiffany & Co.’s first in-house created watch with a manual movement. On the white satiné dial sits the 1920s style numerals, cathedral center hands, and a small seconds indicator. 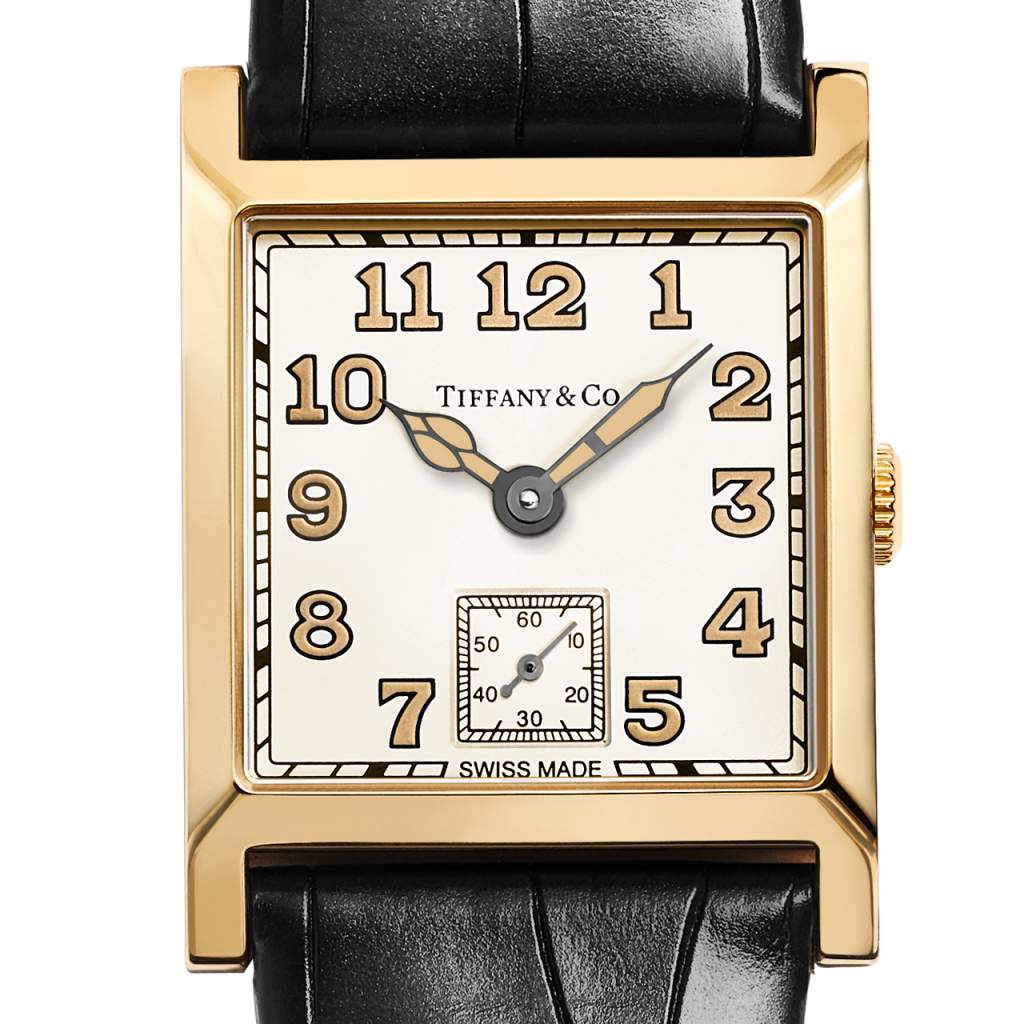 Tiffany & Co came out with their own watch and it is making waves. (Credit: gphg.org)

With looks like these, once Tiffany & Co. officially debuts the 180 Tiffany Square pieces, they won’t stay on the shelves for very long.

Tudor’s submission this year is the Black Bay Chrono—the watchmaker’s first chronograph powered by the Manufacture Caliber MT5813. Tudor has been upfront in announcing that the Caliber MT5813 was born from a collaboration with Breitling and is based on the Breitling B01 caliber. There are however, plenty of Tudor enhancements to the movement too, such as, an oscillating weight, decorative finishes, and regulating organs.

The Black Bay Chrono takes elements from Tudor’s famous diver watches—like the snowflake hands—and combines them with a chronograph. The matte black dial is encased within a 41mm steel case. The case is further outfitted with a tachymetric engraved bezel and a pair of chrono pushers flanking the crown. 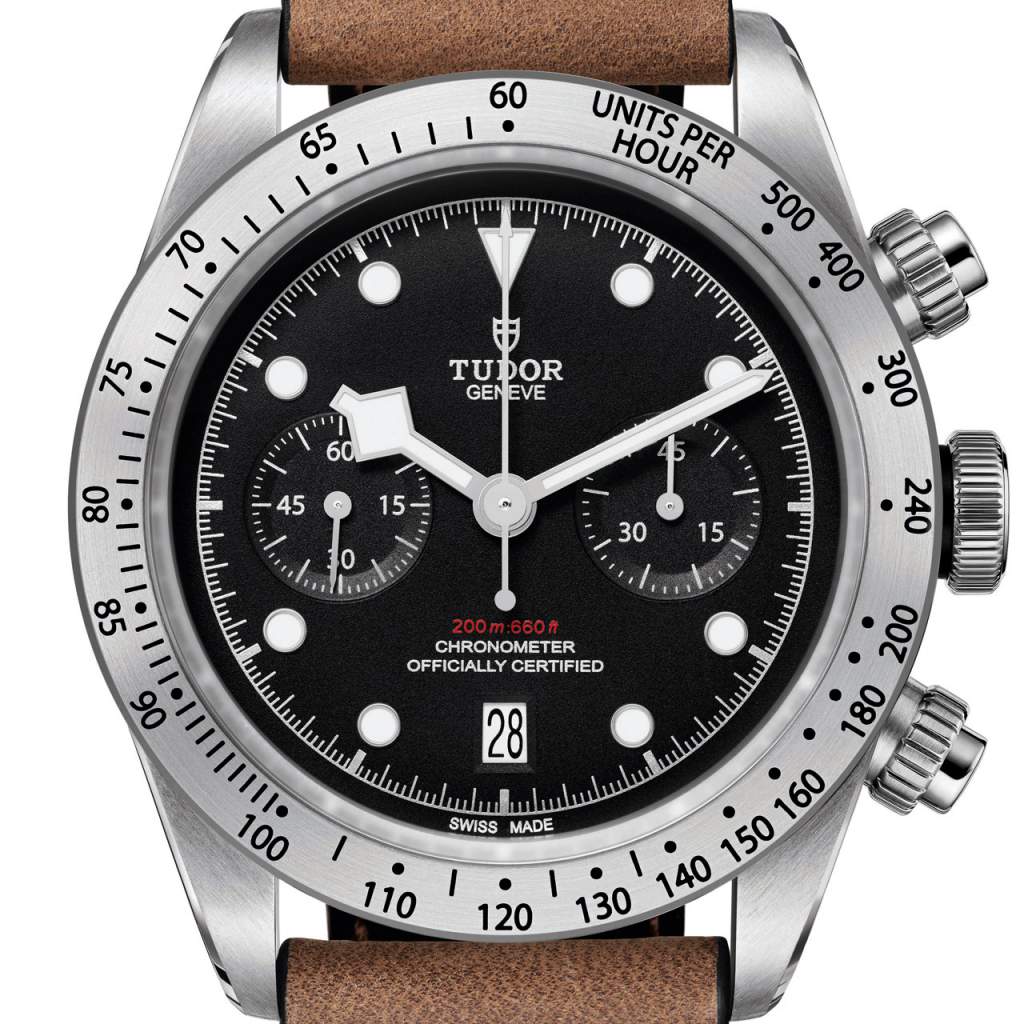 Tudor has released a black timepiece, perfect for the racer. (Credit: gphg.org)

While Rolex does not compete in the GPHG awards, will its sibling company, Tudor take home some awards this year? We think so.

The most striking Ulysse Nardin watches tend to be those that take their design cues from the famous marine deck chronometers created by the company’s founder in the mid-1800s. And this new Marine Tourbillon Grand Feu is no exception.

The 43mm stainless steel case is home to a Grand Feu white enamel dial with oversized Roman numerals and a tourbillon cage. Grand Feu, French for “Big Fire,” is an enameling technique that dates back to the 17th century and is currently done in-house at Ulysse Nardin. Also within the ateliers of Ulysse Nardin are the master watchmakers building manufacture watch movements. Their creations include the new automatic UN-128 Caliber powering this Marine Tourbillon. 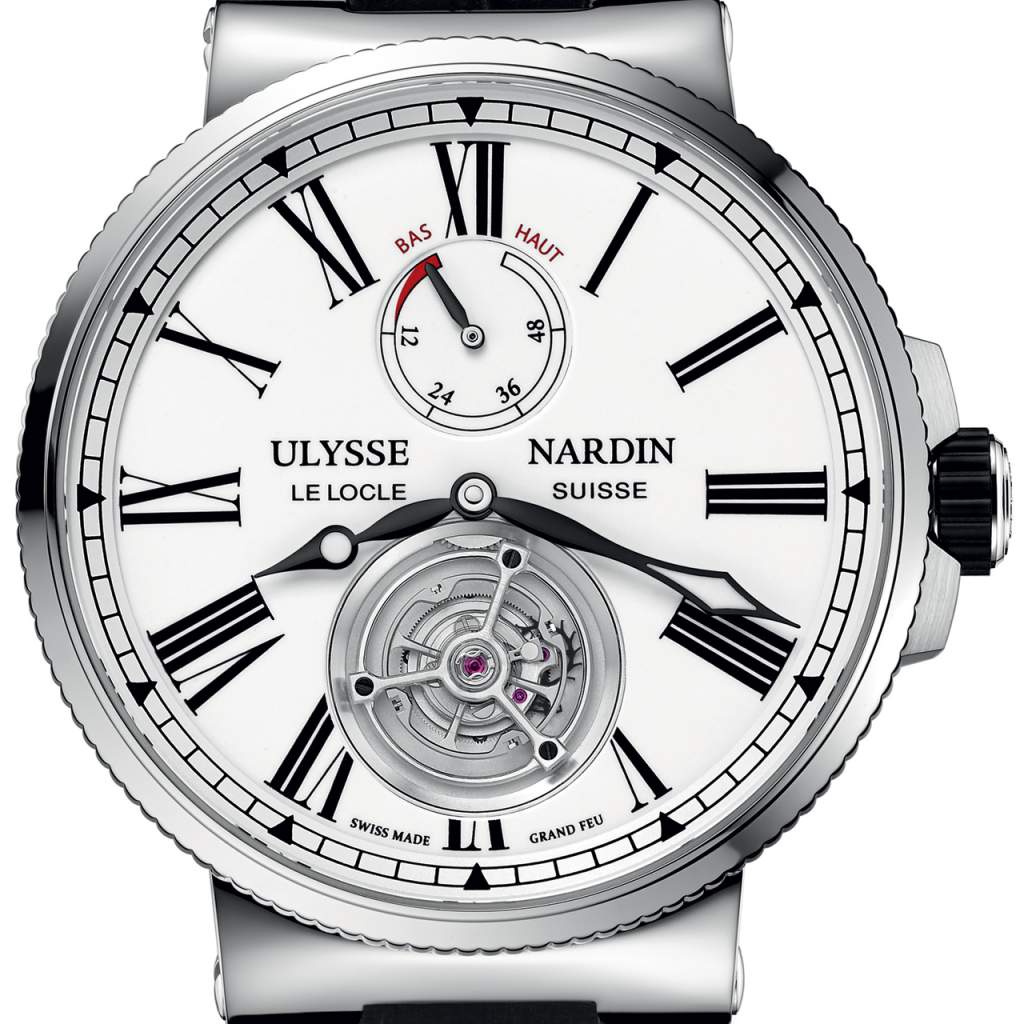 The name for the watch is Grand Feu, which translates to Giant Fire. (Credit: gphg.org)

Although it comes with a price tag of CHF 28,000 ($28,935), considering all the Marine Tourbillon has to offer and the pedigree of Ulysse Nardin, this GPHG watch nominee is a solid value proposition.

Vacheron Constantin made headlines earlier this year when they produced the company’s most complicated wristwatch to date. The Les Cabinotiers Celestia Astronomical Grand Complication is haute horology heaven with a slew of high-complication offerings.

Boasting an incredible 23 complications housed within its 45mm white gold round case, the Les Cabinotiers Celestia Astronomical Grand Complication is a watch centered on astronomy. With functions such as celestial charts, sunset/sunrise times, zodiac signs, Mareoscope (sun, moon, tides), solstices and equinoxes, the new ultra complex Vacheron Constantin is one for the books. It is also a unique piece that was already sold at SIHH 2017 for an undisclosed price. 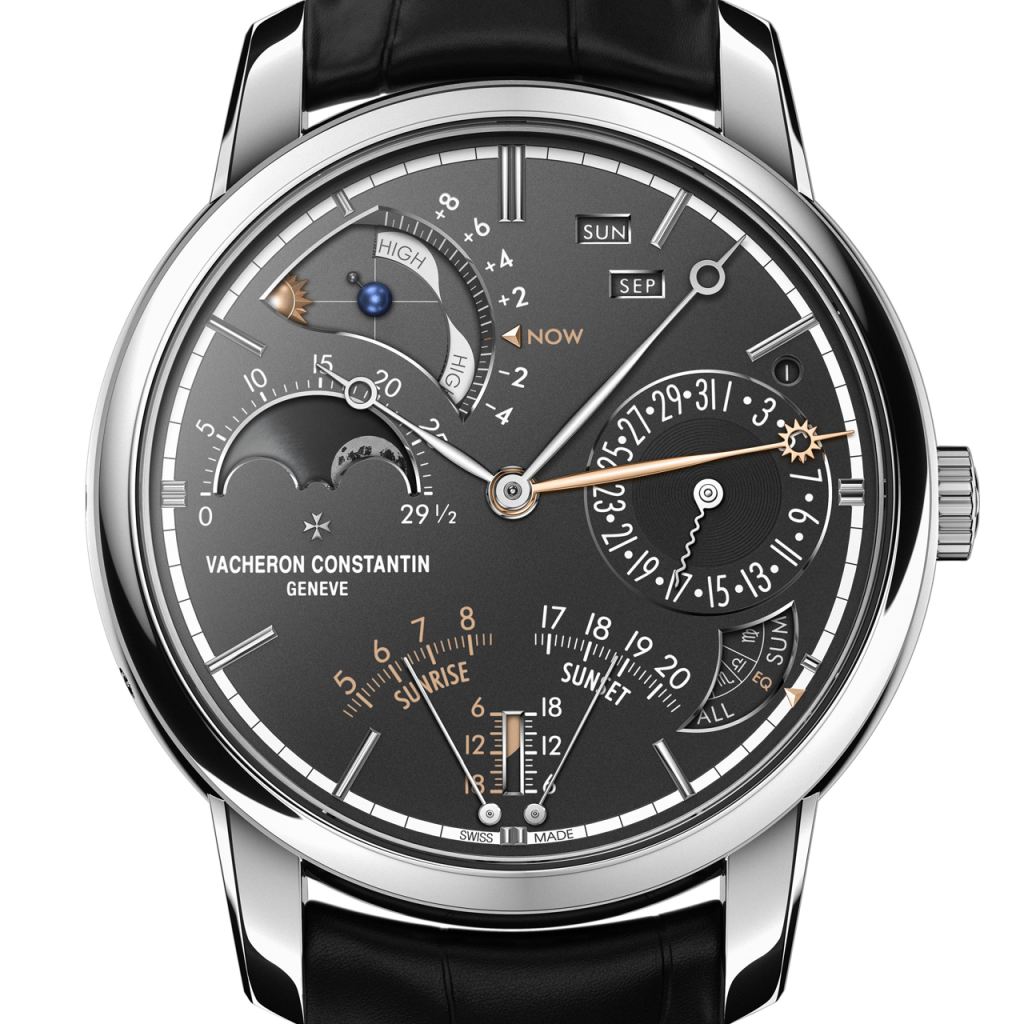 Although Vacheron Constantin’s super complication is already in the hands of its new owner, it’s still very much in the running for a GPHG award.

Hands down the most famous chronograph movement in horological history is the El Primero by Zenith. In fact, it was the base for the Rolex Daytona movement for decades. For this year, Zenith reinterpreted their legendary El Primero chronograph with several new models including this Chronomaster El Primero.

Available with either a black dial or a white Panda one, the new Chronomaster El Primero sports a modern 42mm case crafted in lightweight aluminum and coated in tough ceramic. Beating at the core of the Zenith chronograph is the Caliber 400B automatic column-wheel movement at 36,000 bph (5 Hz). 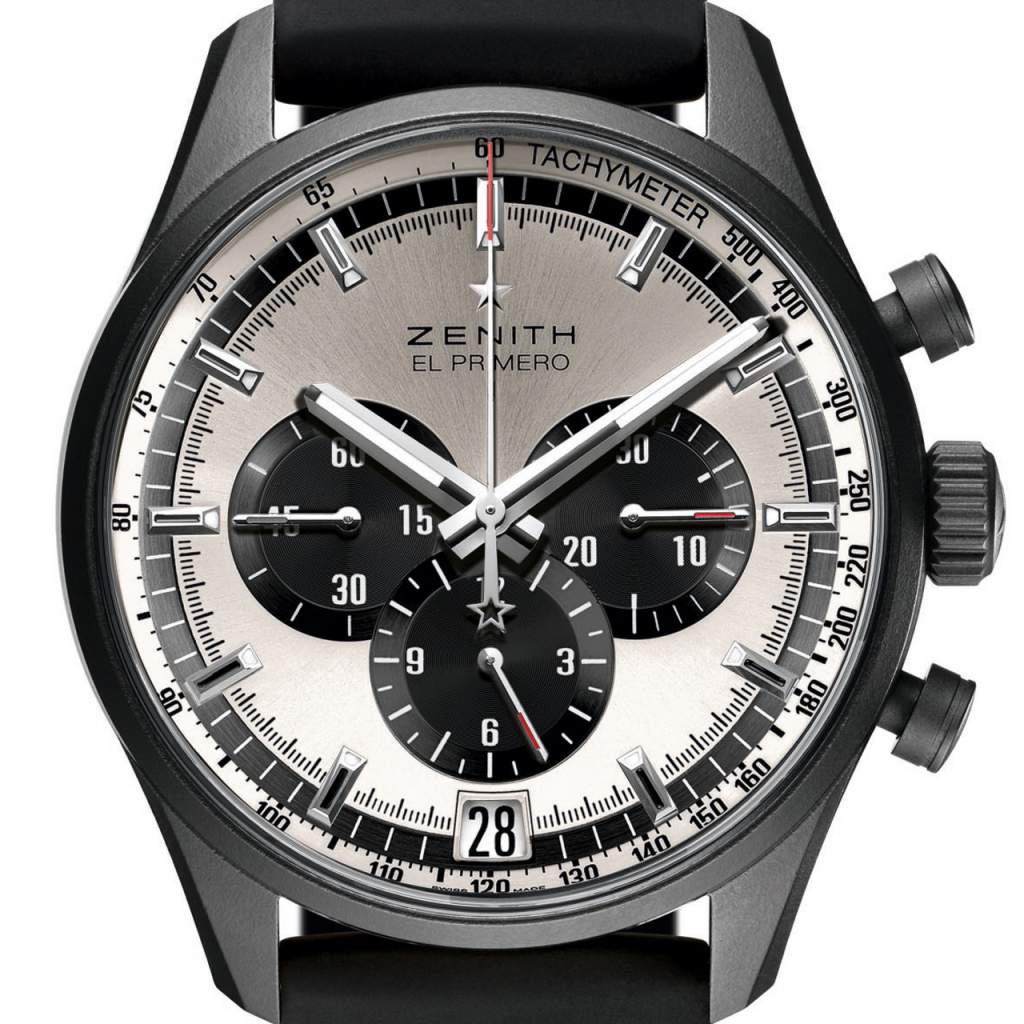 Completing the sporty look of the Chronomaster El Primero is the black perforated rubber strap.

Despite the current difficulties facing the Swiss luxury watch industry, there’s certainly no shortage of great timepieces. As illustrated by these nine watches, great design and solid watch mechanisms are still very much alive. This November, we’ll be tuning in to the GPHG ceremony to see which piece will be deemed The Best Watch Of The Year for 2017.