Our Top Watches for the Autumn

It’s the season of nature’s grand finale, the leaves are full of color and the light has turned to gold.

With the arrival of the fall and its crisp weather, it is time to break out the warm tones to keep the tumbling temperatures at bay. Fortunately, some of the biggest names in luxury timepieces have you covered, with a range of watches decked out in autumn’s matchless palette.

Below, we take a look at three models perfectly suited to this time of year, guaranteed to fight off the chills.

With the vintage watch market positively booming these days, you can’t blame manufacturers for wanting to beef up their bottom line by cashing in on some nostalgia. That’s exactly what Rolex did this year with their GMT-Master range, releasing not one but three new models designed to rouse some wistful reminiscences of yesteryear.

At Baselworld 2018, the long-awaited steel Pepsi stole the lion’s share of the headlines, with its blue and red bezel harking back to the watch’s most historically popular models, including the very first example from the 50s.

But alongside it, two other versions also debuted, very much homages to one of the most distinctive variations of the all-conquering dual time zone legend.

We’ve seen brown used on the GMT before, the so-called ‘Root Beer’ pieces that arrived initially in 1963. But where that piece originally came with an all brown bezel and dial on a yellow gold case, the contemporary watch has a two-tone brown and black surround, topping a case forged in either pure Everose (the brand’s name for their pink gold) or Everose and steel, christened Rolesor.

The solid gold piece gets our vote for the more autumnal wear of the two. The glorious shades of the precious metal, forged in Rolex’s own foundry, perfectly complement the Cerachrom bezel’s twin tones; the top half in a deep lustrous black, the bottom in a rich brown that changes from milk to dark chocolate in different light.

The process of adding two colors to their proprietary ceramic material is one that took Rolex a long time to perfect, but perfect it they have and the blend on the ref. 126715CHNR (CH for CHocolat and NR for NoiR) is typically seamless.

Inside, the revolutionary Cal. 3285 runs the show, at the heart of which is the new Chronergy escapement, a stripped down, heavily reengineered update of the traditional Swiss Lever mechanism. With its skeletonized escape wheel and pallet fork, and nickel-phosphorous construction, it is both completely antimagnetic and some 15% more efficient, as well as being subjected to Rolex’s own ruthless chronometer standards which demand an accuracy of between +2/-2 seconds a day.

At a list price of around $36,750 brand new (if you can find one) no one would describe it as cheap, but it is a modern take on an all-time icon, with the perfect amount of vintage appeal. 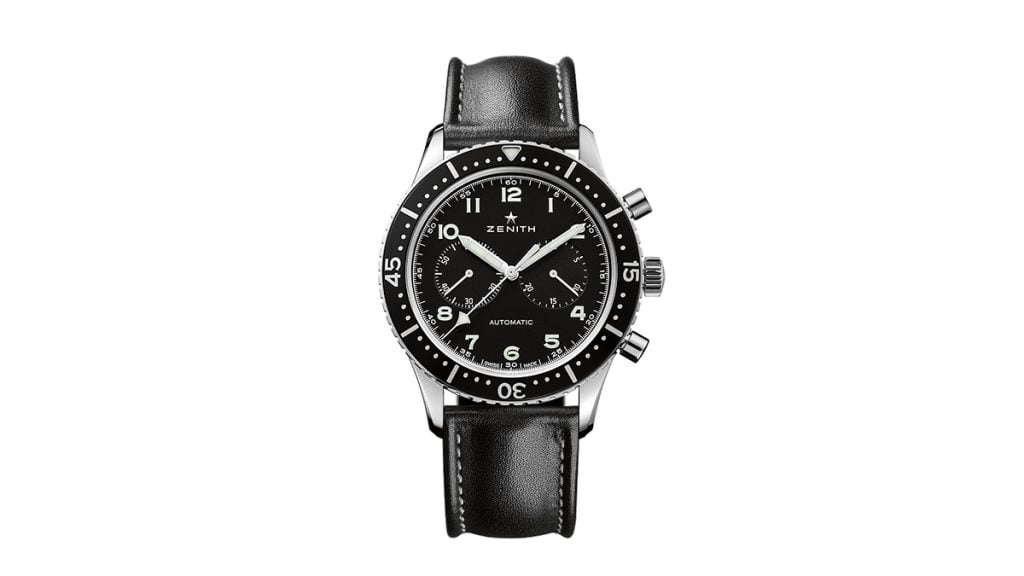 Taking their inspiration from a military-commissioned chronograph made for the Italian Air Force in the 1960s, known colloquially as the Cairelli, fabled Swiss manufacture Zenith brought out a limited edition reissue called the Heritage Cronometro Tipo CP-2 in 2016. With all 1,000 pieces of that model flying off the shelves, the watch was put into standard production this year, available in either an aged stainless steel case or, our choice for the season of mists and mellow fruitfulness, a striking bronze version.

Mixing in elements from the original piece while sticking with the accepted design language of the rest of the brand’s Heritage Pilot series, the Cronometro Tipo CP-2 Flyback sits in the middle of the range size-wise with a 43mm diameter. Up front is a bi-compax chronograph layout, with a running seconds sub dial at the nine o’clock and a minute counter at the three, fixed to a textured granular dial in bronze to match the case. The false patina to the finish, a trend that is becoming evermore popular lately, is carried off beautifully here, adding just enough of a retro-look to an already classy offering.

Inside, of course, is a movement that needs no introduction. The latest version of Zenith’s celebrated El Primero, the 405B, loses the date function but gains a flyback mechanism, allowing the wearer to instantly restart the chronograph from zero with the push of a button. It is a feature that is particularly useful in an aviator’s watch, and Zenith’s column-wheel controlled, ultra high frequency masterpiece is among the most impressive ever made. Even better, unlike the 2016 special edition, the production model comes with a sapphire display case back to let you watch the engine do its work.

The handset and numeral font are both direct tributes to the original; the hour and minute baton hands yellow gold on the new bronze piece, with an identical airplane-shaped central seconds pointer.

Supplied on a brown oily nubuck leather strap (or a green one on the steel model) it matches the warm tones of the case and is secured with a titanium pin buckle.

A definite refreshing change from the usual suspects of the horology world, the Zenith Cronometro Tipo CP-2 Flyback is a stunningly accomplished timepiece, and an ideal autumn companion. 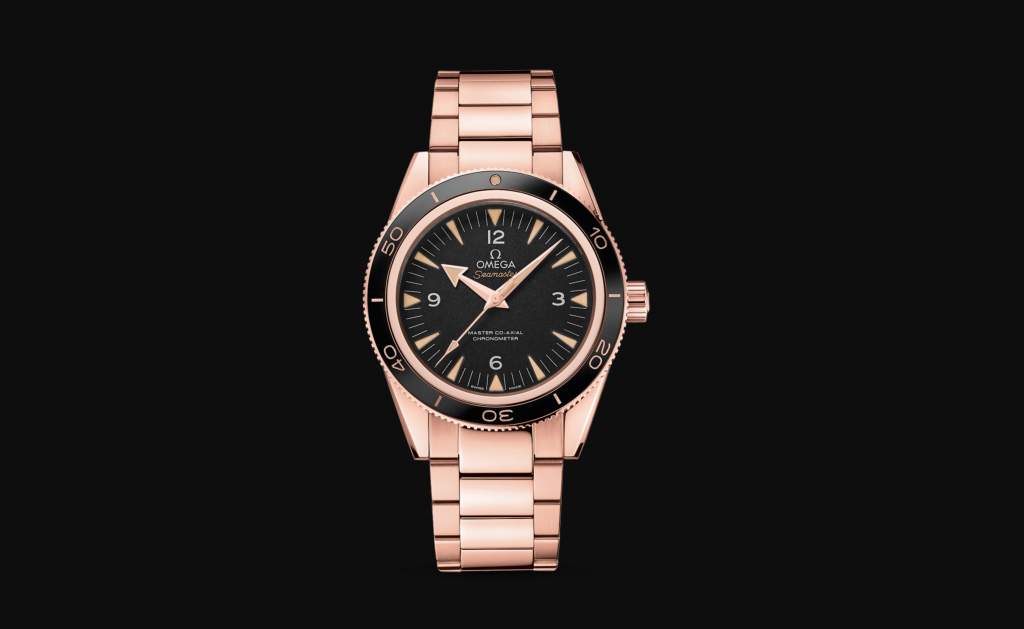 A name as recognizable as the Submariner in dive watch circles, the Omega Seamaster 300 Master Co-Axial comes in a number of guises, including models in both full stainless steel and full titanium. However, it is the colors of the brand’s Sedna model that fit in best with this time of year.

With an 18k red gold body and crown, the ref. 233.62.41.21.01.003 features a bezel utilizing Omega’s Ceragold technology. Bonding the precious metal with an ultra tough ceramic to inset the surround’s numerals, it is the high end version of their own LiquidMetal process, and meant as a response to Rolex’s Cerachrom.

Whether or not all that gold belongs on a dive watch, or any sports watch for that matter, is a question for the owner, but what can’t be argued with are the gorgeous looks. Particularly fitted with the brown calfskin strap, the Seamaster 300 is an exceptionally handsome addition to the range, and one with a great deal of versatility for the autumn months.

Inside beats the manufacture Co-Axial Caliber 8401 movement, the slimmed-down, no date, luxury variant of the base caliber 8500. Chock full of paramagnetic materials, including a silicon Si14 balance spring, it shrugs off magnetic fields of up to 15,000 gauss—the biggest killer of mechanical movements. Like the Zenith above, the inner workings are visible through a display back, so you can admire the high level of finishing; the bridges and oscillating weight decorated with Omega’s own Geneva waves with arabesque pattern, and the blued screws holding everything in place.

On the dial, the indexes have been laser etched and they, along with the emblematic broad arrow hands, are also coated in Sedna gold, reflecting the light beautifully. The strong contrast next to the dark dial makes it especially legible.

The straight lugs on the 41mm case give it plenty of wrist presence, but the absence of crown guards ensure it is not too overwhelming. The solid gold shell lends it a real weight too; much heavier, for instance, than its all steel counterpart.

That signifier of opulence does come at a price of course, and the price in this case is the price. While the entry level model can be had for around the $5,500 mark, expect to pay nearly three times that for all that gold on what is, in fairness, the top of the range example.

Another winner from Omega, the Sedna gold Seamaster 300 is the ideal blend of performance and aesthetic beauty.