If you’re a fan of the popular blacked-out sports watch style, then the recently-discontinued Tudor Black Bay Dark may be just the watch for you. Much less expensive than full black ceramic watches, this black PVD-coated stainless steel Tudor Heritage Black Bay – complete with an in-house movement – is a modern take on the brand’s vintage-inspired dive watch collection. 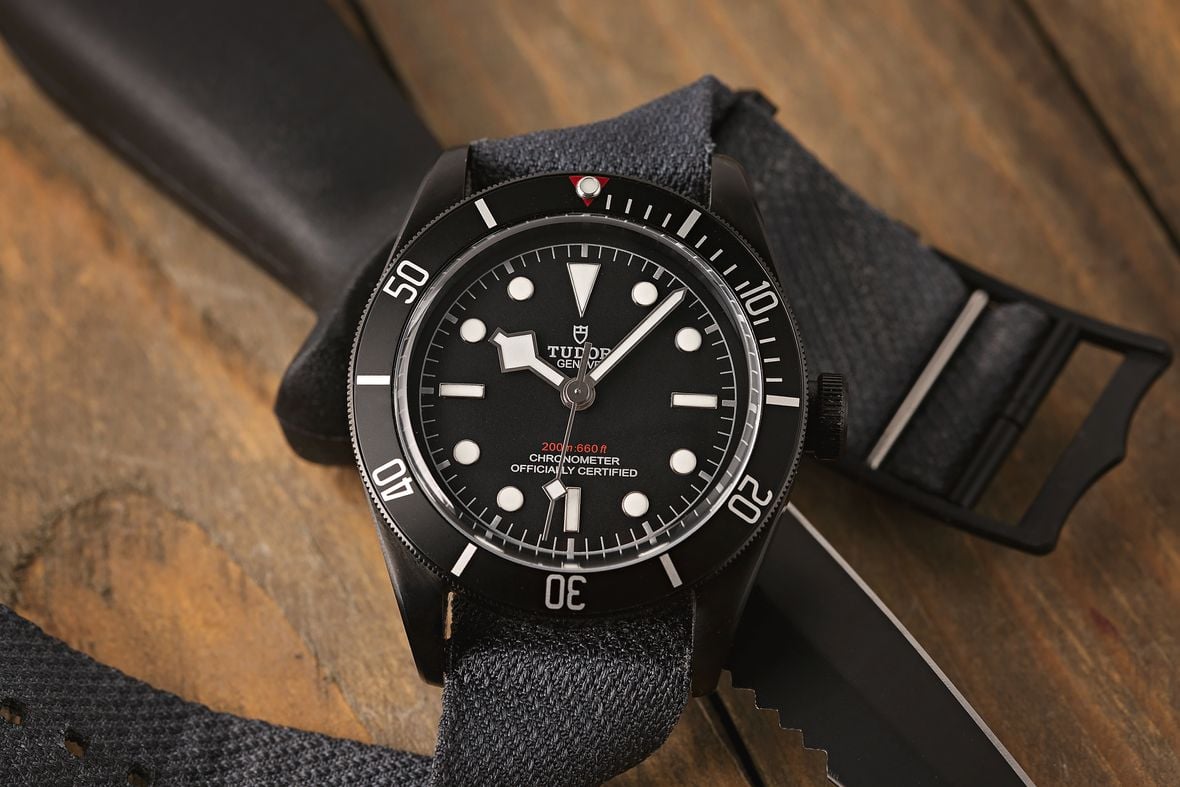 Click here for our Ultimate Buying Guide on the Tudor Heritage Black Bay. 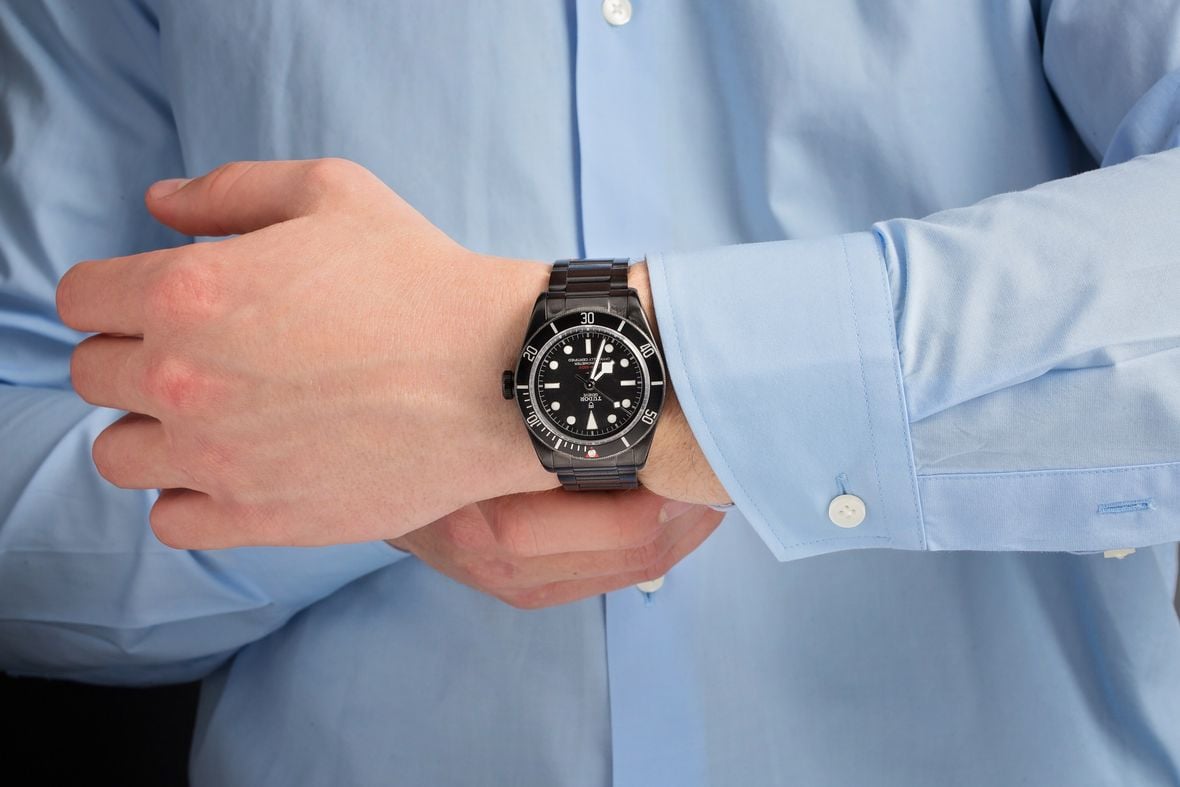 Tudor first introduced the Heritage Black Bay in 2012, using the vintage Tudor Submariner as inspiration. Along with reinterpreting the general design and silhouette of its famed vintage diver when creating the Black Bay, Tudor also borrowed the oversized winding crown from the ref. 7924 and the geometric “snowflake” handset from 1970s Submariners destined for the French Navy.

Incorporating some of the best and most iconic design elements from Tudor’s archives, the Heritage Black Bay was an immediate success among collectors and it served as the poster-child for Tudor’s major brand relaunch. Just four years after launching the Black Bay collection, Tudor released a slew of fresh models at Baselworld 2016, including new versions of the stainless steel Black Bay and the never-before-seen Black Bay Dark. 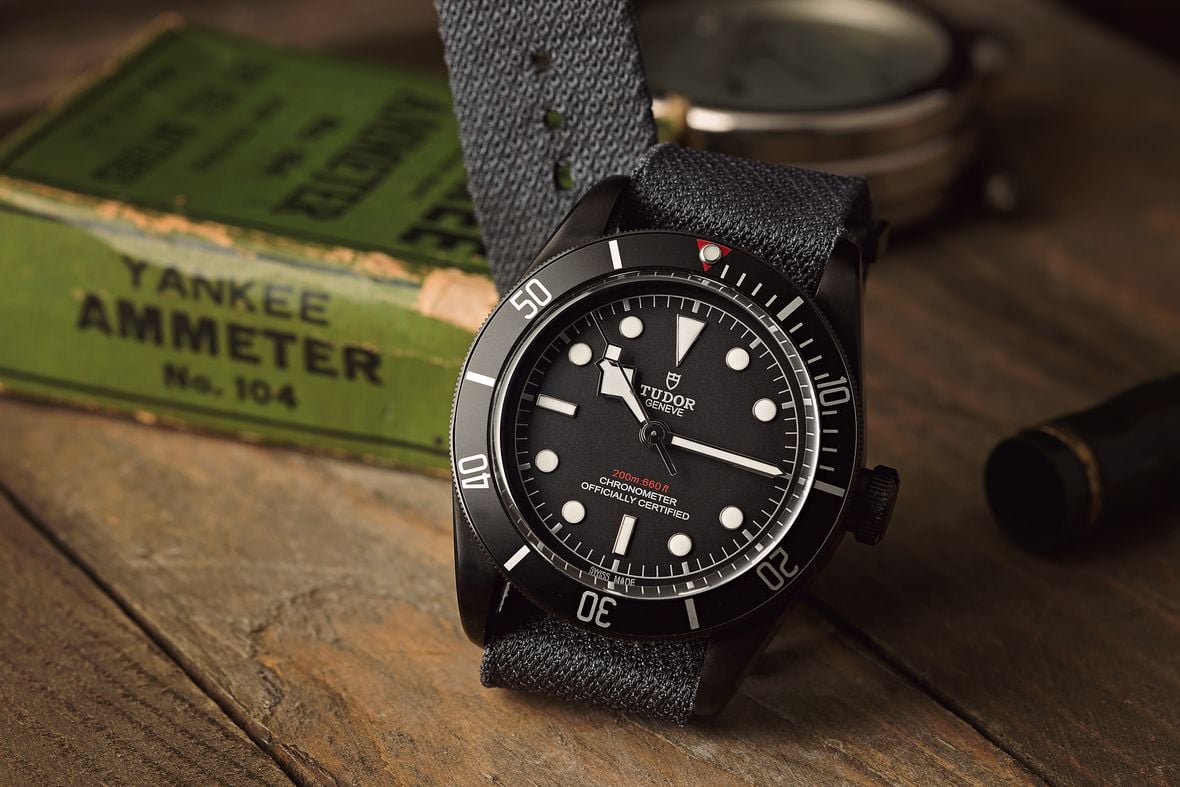 Like other reference 79230 watches, the Tudor Black Bay Dark sports a customary 41mm stainless steel case. However, to achieve its all-black look, the ref. 79230DK is treated with a black Physical Vapor Deposition (PVD) coating with a satin finish.

On top of the case sits a unidirectional rotating bezel (also made from PVD-coated steel), and fitted with a black anodized aluminum insert. The bezel includes a red inverted triangle with a luminous pearl at 12 o’clock and a 60-minute timing scale for divers to keep tabs on how long they’ve spent underwater. The first 15 minutes of the insert’s scale includes marks at every minute followed by a marking every 5 minutes for the rest of the insert. 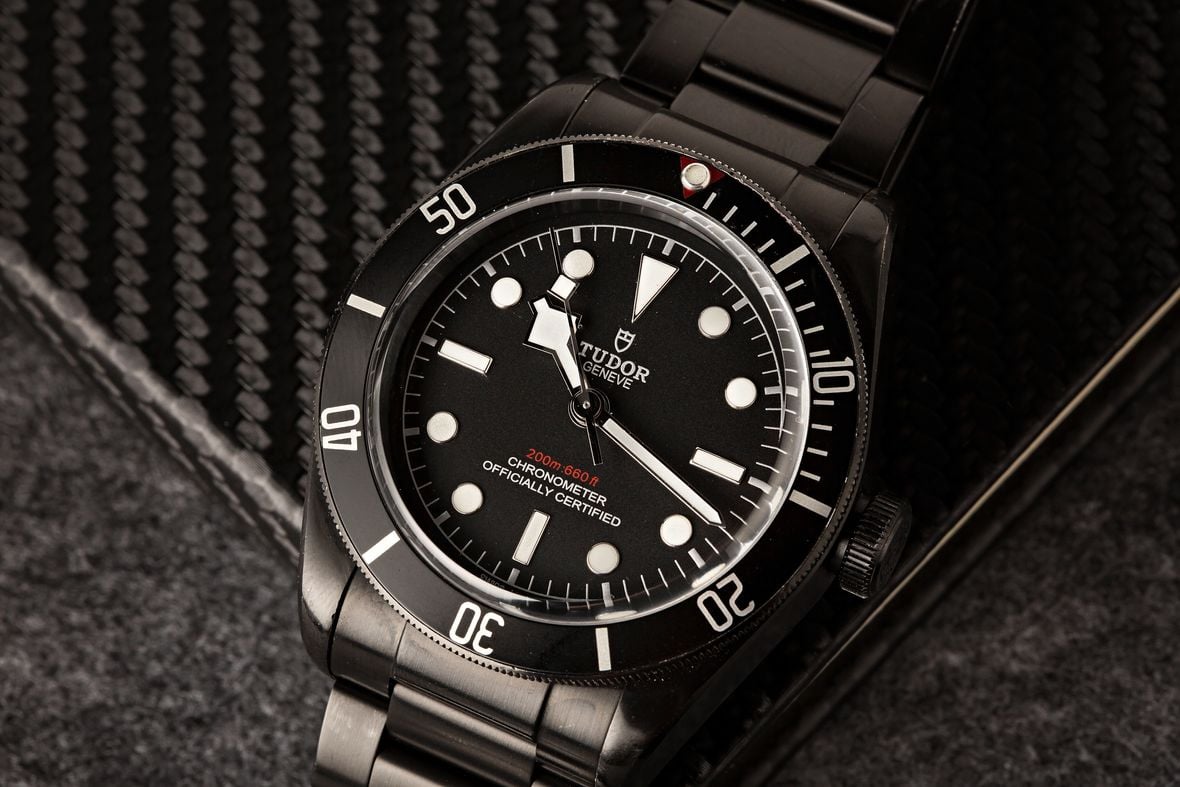 As expected, the Tudor Black Bay Dark’s winding crown screws down onto the middle case to create a waterproof barrier. A closer look at the crown reveals an engraved rose emblem, which if you’re familiar with Tudor’s history, you’ll recognize as the brand’s earliest logo. The only use of color on the Black Bay Dark is the red text for the depth rating on the dial and an inverted red triangle on the bezel. These touches are yet another throwback to vintage Tudor (and Rolex) dive watches.

One of the signature design details of all Tudor Black Bay watches is the angular snowflake hands, and the Black Bay Dark is no different. The white lume of the hands and hour markers pop against the black elements while the lack of a date window allows the dial layout to remain uncluttered and appealingly symmetrical.

Tudor offered the Black Bay Dark with a choice of a matching black PVD-coated stainless steel bracelet or an aged black leather strap – both of which were fitted with a black PVD-treated steel folding clasp. Plus, regardless of whether the watch is paired with a strap or bracelet, the Tudor Heritage Black Bay Dark comes with an additional Jacquard fabric strap. 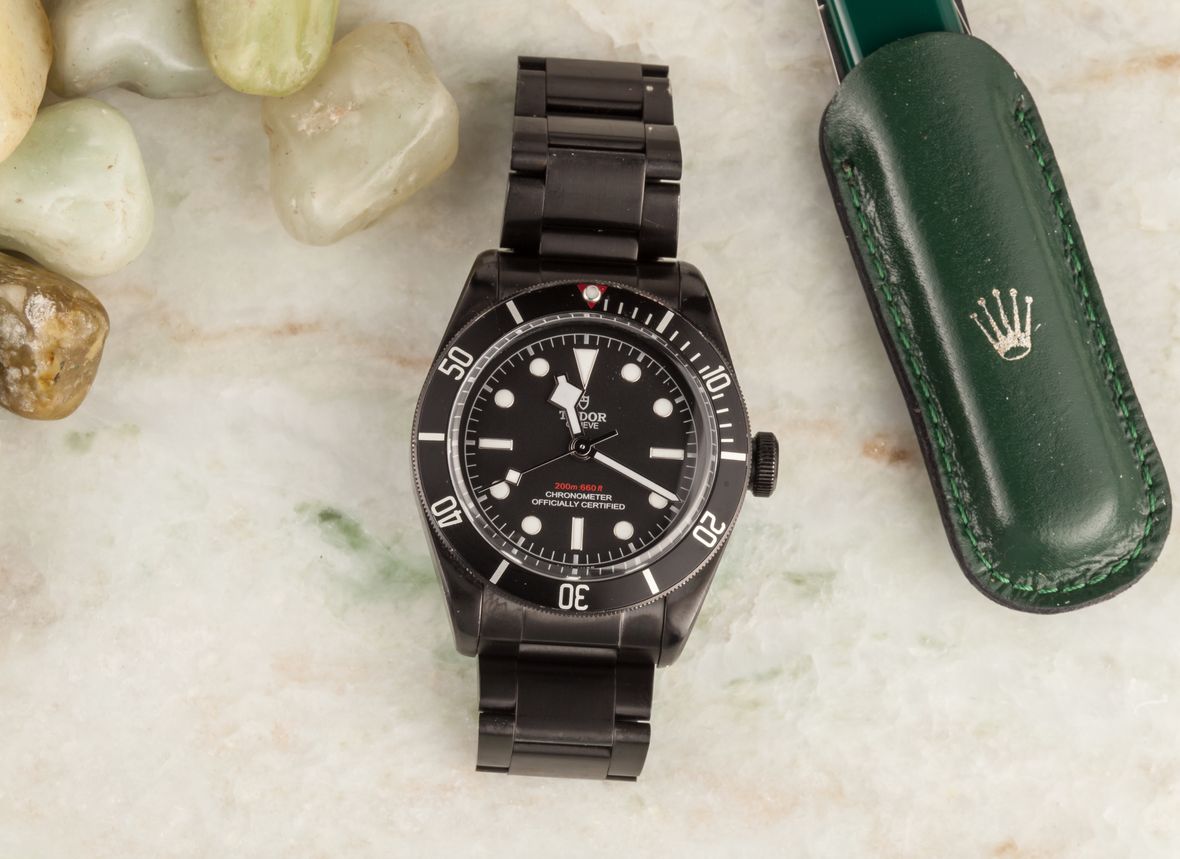 Earlier models of the Heritage Black Bay ran on ETA-based movements but in 2015, Tudor announced its first in-house movement, the Caliber MT5621, which made its debut in the North Flag models. Since the Black Bay Dark was released the year after, it benefited from the addition of a Tudor-made movement: the Caliber MT5602.

The automatic MT5602 movement that drives the hour, minute, and seconds hands of the Tudor Heritage Black Bay Dark offers the wearer a respectable 70-hour power reserve. Tudor’s Caliber MT5602 beats at a frequency of 28,800 beats per hour (4Hz), and it is regulated by a variable inertia oscillator fitted with a silicon hairspring (which fares better against temperature swings, shocks, and magnetism than other materials). The movement is COSC-certified and as a result, Tudor includes the “Chronometer Officially Certified” designation on the dial of the Black Bay Dark.

All in all, the Tudor Caliber MT5602 is a well-made modern mechanical movement that has the added cachet of being made in-house by Rolex’s famous sibling company. Despite its in-house designation, the Cal. MT5602 is hidden away beneath the solid screw-down caseback of the watch, which grants the Black Bay Dark 200 meters of water resistance. 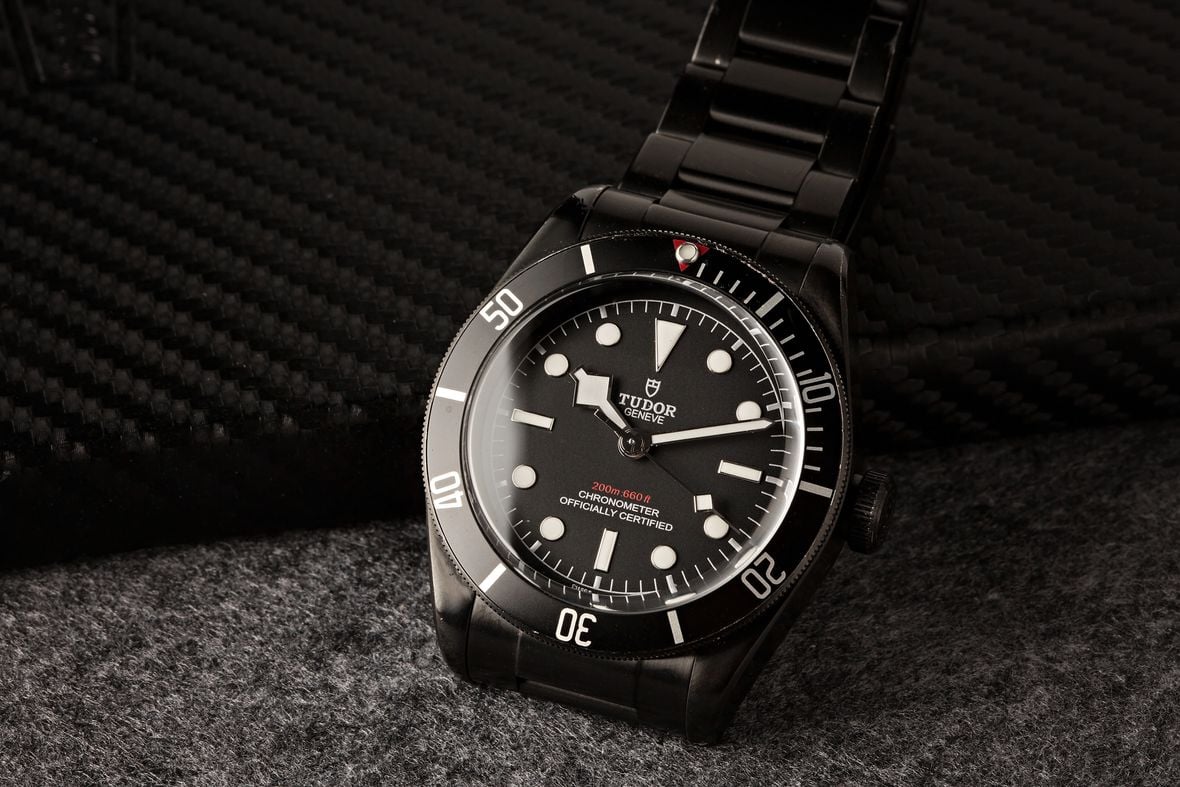 It’s important to point out that the Black Bay Dark has recently disappeared from Tudor’s current collection. Therefore, the pre-owned market will now be the go-to source to find this sleek Tudor dive watch, and due to only remaining in production for about 5 years, there are not all that many examples available compared to its standard stainless steel siblings.

At the present time, pre-owned prices for the Tudor Heritage Black Bay Dark ref. 79230DK are right around the same as the rest of the 41mm models with in-house movements from the Black Bay collection. With that in mind, given that this all-black model is no longer available at a retail level and there is now a fixed number of examples in existence, you can expect prices to increase in the future should the Black Bay Dark increase in popularity.

With a well-proportioned case size, a striking blacked-out design punctuated with white and red accents, and an in-house movement, the Tudor Heritage Black Bay Dark checks off plenty of boxes. Couple that with its relatively affordable price tag, and you’ve got a solid option for a modern high-quality dive watch from an internationally renowned watch brand. 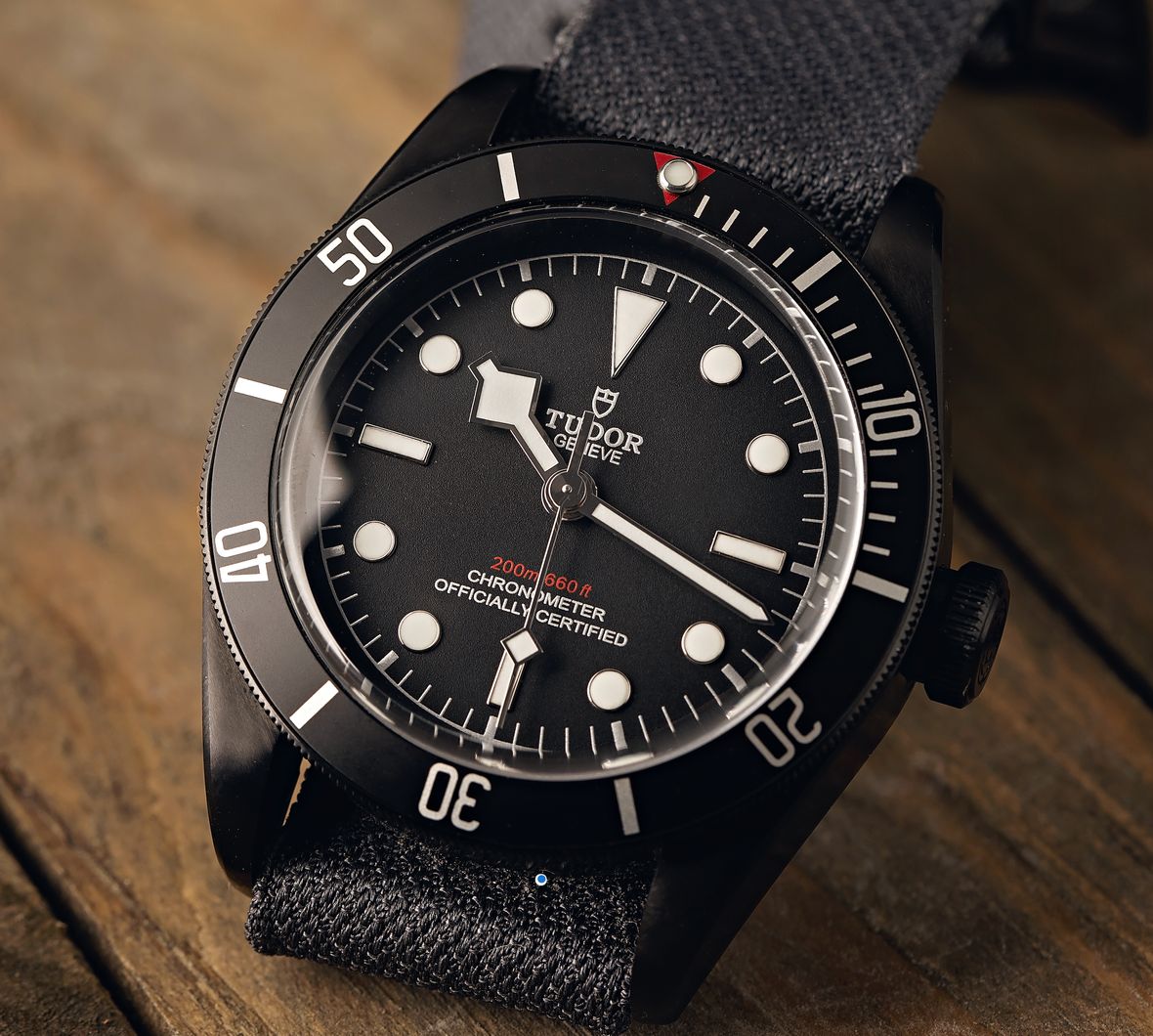