Characterized by its blue and black bezel, the GMT-Master II Batman is one of Rolex's most popular modern sports models. Rolex introduced the first GMT-Master II Batman in 2013 and has since replaced that original reference with a newer model with a handful of design updates and a new-generation movement. Browse the other GMT Master II models by visiting our full selection of used Rolex GMT Master II watches.

About the Rolex Batman


Characterized by its blue and black bezel, the GMT-Master II Batman is one of Rolex's most popular modern sports models. Rolex introduced the first GMT-Master II Batman in 2013 and has since replaced that original reference with a newer model with a handful of design updates and a new-generation movement.

When Rolex released the first batch of GMT-Master II watches with Cerachrom ceramic bezels starting in the mid-2000s, there was a significant design element missing—the option for a bi-color bezel. The two-tone bezel was always a signature trait of the GMT-Master lineup since the mid-1950s (it was a way to differentiate between day and night hours) but Rolex declared that due to the nature of the material, it would be impossible to manufacture a two-colored Cerachrom bezel.

However, after years of research and development, Rolex introduced the GMT-Master II ref. 116710BLNR with a black and blue Cerachrom bezel. BLNR is short for the French words "bleu" and "noir," which translates to "blue" and "black." As with many Rolex watches, the then-new watch picked up a nickname along the way and it is now commonly known as the GMT-Master II Batman.

After only six years in production, the 116710BLNR was replaced by the GMT-Master II Batman ref. 126710BLNR in 2019. Although the new Batman retained its distinguishing blue and black Cerachrom bezel, the new reference is equipped with Rolex's latest caliber and is exclusively available with a Jubilee bracelet rather than an Oyster bracelet. The ref. 126710BLNR is sometimes called the "Rolex Batgirl" thanks to its dressier bracelet.

There have only been two GMT-Master II Batman references made:

GMT-Master II Batman watches are exclusively available in stainless steel and feature black and blue Cerachrom bezels with platinum-coated engraved numerals. They are automatic watches that offer dual-time functionality and a date window at three o'clock, magnified by a Cyclops lens. The 12-hour hand is a Mercedes-style hand that indicates local time. Conversely, the 24-hour hand features a triangular tip and displays a second time zone by pointing to the 24-hour marked bezel. A third time zone can also be read if the wearer rotates the bezel in accordance with the time difference of the second time zone.

While both GMT-Master II Batman watches are somewhat similar, there are some major differences to note. 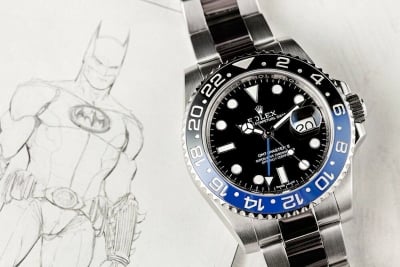 Rolex's green Submariner with ceramic bezel insert isn't the only Rolex sport watch with a superhero nickname; the latest addition to the GMT-Master line, the reference 116710BLNR is lovingly called the "Batman GMT" by many Rolex collectors.

The reference 116710BLNR marks the first time in Rolex history that a two-color ceramic bezel insert is available on a stainless steel sport watch. While its black and blue color profile embraces similar hues to Gotham's superhero from the old DC comic books, the "Batman" nickname likely came about as a logical pairing for the pre-existing "Hulk" nickname that had already been established for Rolex's green Submariner. To view a list of our GMT watches for sale visit our used Rolex GMT Master watches page.

Unique Features for the Rolex Batman

A half black, half blue, 24-hour bezel insert with silver text - made Cerachrom.