About the Rolex Coke

When the GMT-Master II made its debut in the early 1980s, Rolex equipped it with a new black and red bezel colorway. Following the soda-inspired nicknames of the blue and red "Pepsi" bezel and the brown and yellow "Root Beer" bezel, the black and red GMT bezel quickly became known as the "Coke" bezel. There have only been two references of the GMT-Master II Coke made—neither of which are in production today. Therefore, the only option to own a GMT-Master II Coke today is to buy one from the pre-owned watch market.

While Rolex introduced the GMT-Master in the 1950s as a way for pilots to read two time zones simultaneously, it wasn’t until 1982 that the GMT-Master II joined the lineup. Similar in style to the original GMT-Master but more technically advanced, the GMT-Master II features de-coupled 12-hour and 24-hour hands that can be set independently from each other.

When Rolex released the then-new six-digit GMT-Master II with Cerachrom ceramic bezels in the mid-2000s, the Coke bezel disappeared from the catalog and has not returned—yet.

There have only been two GMT-Master II Coke references made:

GMT-Master II Coke watches are exclusively available in stainless steel and feature aluminum bezel inserts with 24-hour markings. They are automatic watches that offer dual-time functionality and a date window at three o'clock, magnified by a Cyclops lens. The 12-hour hand is a Mercedes-style hand that indicates local time. Conversely, the 24-hour hand features a triangular tip and displays a second time zone by pointing to the 24-hour marked bezel. A third time zone can also be read if the wearer rotates the bezel in accordance with the time difference of the second time zone.

While both GMT-Master II Coke watches are quite similar, there are some differences to note. 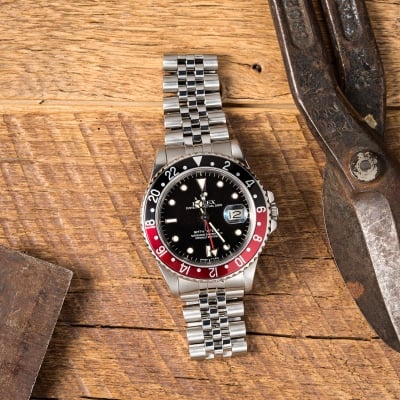 By the time Rolex introduced the GMT-Master II in 1983, the red and blue bezel insert from the original GMT-Master had already earned its now-legendary "Pepsi" nickname. While the half red, half black bezel insert from the "Coke GMT" is somewhat reminiscent of a full bottle of Coca-Cola with its red and white label, the "Coke" nickname most likely came about as a response to the previously well-established "Pepsi" nickname of the original version of the GMT-Master, with its red and blue bezel insert. To browse additional GMT models visit our used Rolex GMT watches for sale.

Unique Features for the Rolex Coke

A half red, half black, 24-hour bezel insert with silver text - made from aluminum.