Defined by a chocolaty colored bezel, GMT-Master Root Beer watches, which are always two-tone or solid gold, are some of the most distinctive-looking models ever made by Rolex. While the original Root Beer bezel was fashioned in aluminum and combined brown and yellow, today's GMT-Master II Root Beer watches sport Cerachrom ceramic bezels in brown and black.

Rolex introduced the first two-tone yellow gold and stainless steel GMT-Master pilot's watch in the 1970s in the form of the ref. 1675/3. Three bezel options were offered including black, reddish brown, and a brand new color combo of brown and yellow. The brown and yellow combination later became known as the "Root Beer" bezel, following in the footsteps of its soda nicknamed counterpart, the blue and red GMT "Pepsi" bezel.

While the very first GMT-Master II (ref. 16760) was only available in steel, Rolex offered the second generation in steel, yellow gold, and two-tone gold and steel. The two-tone version was the GMT-Master II ref. 16713 and it too had the option of the brown and yellow Root Beer bezel.

Finally, in 2018, Rolex released a new generation of the GMT-Master II with 12671x reference numbers. Within this new collection are two models—the Everose gold GMT-Master II 126715CHNR and the two-tone Everose gold and stainless steel GMT-Master 126711CHNR—with brown and black Cerachrom bezels. Despite sporting a different color combination and made from a different material to the original Root Beer bezels, Rolex enthusiasts have taken to calling these brown and black CHNR bezels Root Beer as well.

Throughout the decades, Rolex has made a number of GMT-Master Root Beer References

It's important to note that while Root Beer bezels are technically those that are either brown and yellow or brown and black, it is not uncommon for all-brown bezel versions to be classified as GMT-Master Root Beer watches too. These include the following references:

Historically, pre-owned gold and two-tone Rolex watches from the current collection could be purchased at discounted prices. Yet, this does not seem to apply to the modern-day Root Beers as they are both valued higher than their retail prices in the secondary market due to their lack of availability at authorized dealers. 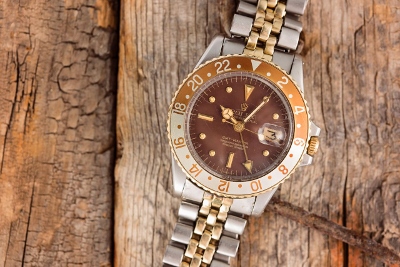 Keeping with the trend of soda nicknames for Rolex’s multi-time zone pilots’ watches, GMT-Master and GMT-Master II watches fitted with brown dials and brown and gold bezel inserts have earned the nickname "Root Beer GMTs" by many members of the Rolex collecting community. These watches are made from solid 18-karat gold, or a combination of both stainless steel and gold, and are fitted with bezel inserts that are half gold and half brown, or all brown with gold-colored text on them. The "Root Beer" nickname has its origins in the watch’s resemblance to a frothy glass of root beer; however much like the "Coke" nickname, it primarily arose as a response to the pre-existing "Pepsi" nickname that collectors were already using to describe the red and blue version of Rolex’s multi-time zone pilots’ watch. To browse additional GMT models visit our used Rolex GMT watches for sale