Just like celebrities that go by just one name, the Daytona is a superstar in the world of watches. Officially called the Rolex Cosmograph Daytona but more commonly known as the Daytona, this chronograph has been around since the early 1960s and its popularity has never been stronger. With a history that spans almost six decades, there are plenty of Daytona models to choose from and more than a handful of greatest hits. Here are the Rolex Daytona chronograph models every collector gawks over and why. 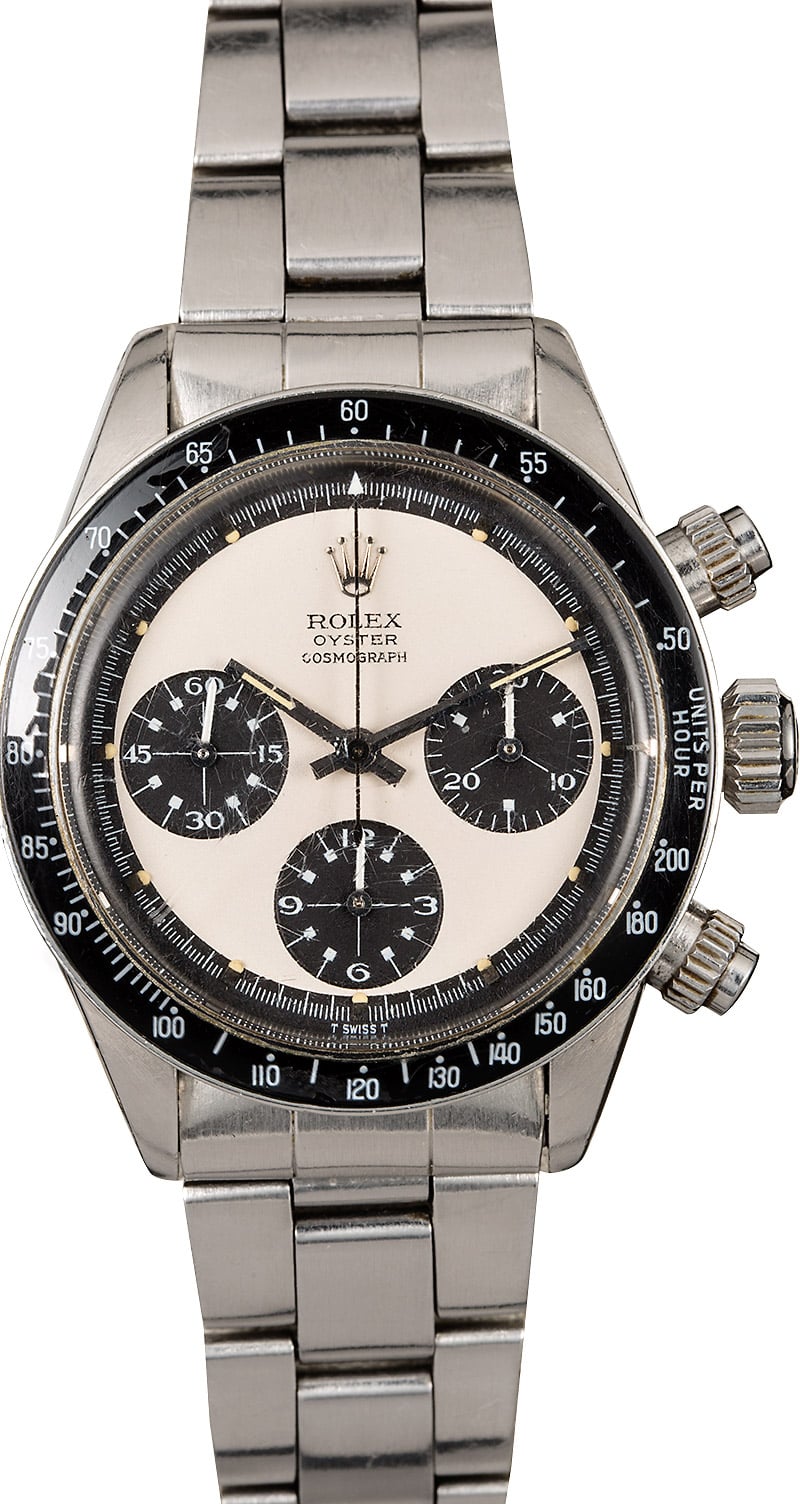 Produced from the early 1970s to the late 1980s, the Daytona 6263 is one of the last versions of the hand-wound Daytona models ever produced (along with its metal-bezel counterpart the ref. 6265). As such, it brought together all the enhancements Rolex had tinkered with from past versions into one fantastic reference. The Daytona 6263 featured a waterproof Oyster case complete with screw-down chronograph pushers borrowed from the ref. 6240, the updated Valjoux 727 of the ref. 6264/6262, and the black tachymeter bezel introduced by the ref. 6241. Whether in steel or gold, with a standard dial or the coveted “Paul Newman” dial, the Daytona ref. 6263 is one that collectors recognize as a grail watch. 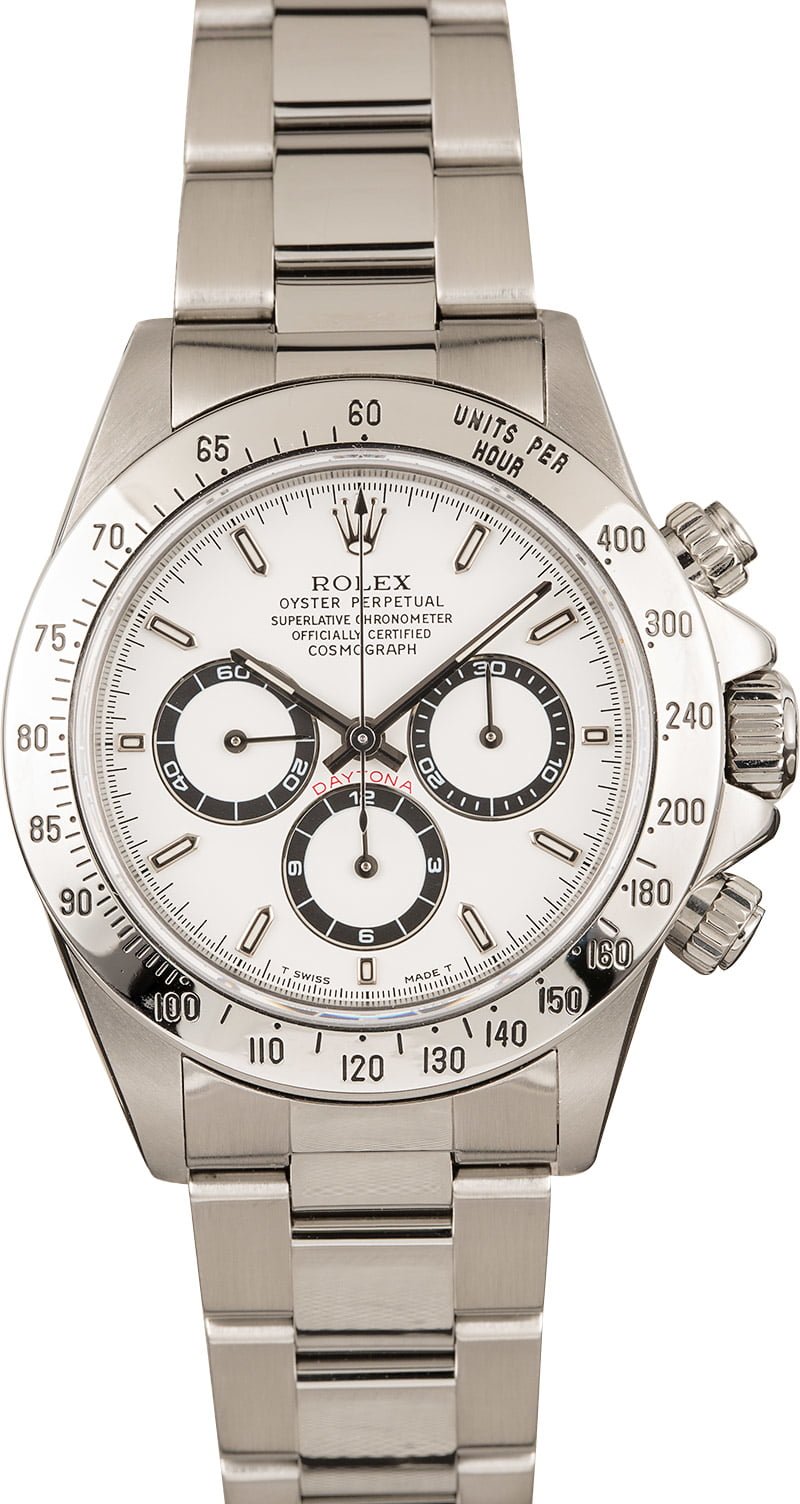 In 1988, Rolex finally switched over from Valjoux-based manually wound movements to Zenith El Primero-based automatic movements for the Daytona collection. Along with the new caliber, Rolex also revamped the style of the automatic Daytona to include a bigger case, metal tachymeter-engraved bezels only, and dials with rings around the trio of registers. The reference 16520 was the stainless steel version of the then-new automatic Daytona and unlike its hand-wound predecessors, it was a hit with consumers from the start. The “Zenith” Daytona ref. 16520 features a stainless steel 40mm Oyster case with screw-down chronograph pushers, a matching steel Oyster bracelet, and it came with the option of a white or black dial. The so-called “Patrizzi” dial, characterized by counters that unexpectedly turned brown due to its Zapon varnish, are particularly collectible. However, all Rolex Daytona 16520 models are popular with collectors because this is the reference that jump-started the automatic Daytona lineup (which would eventually be fitted with in-house-made movements in 2000). 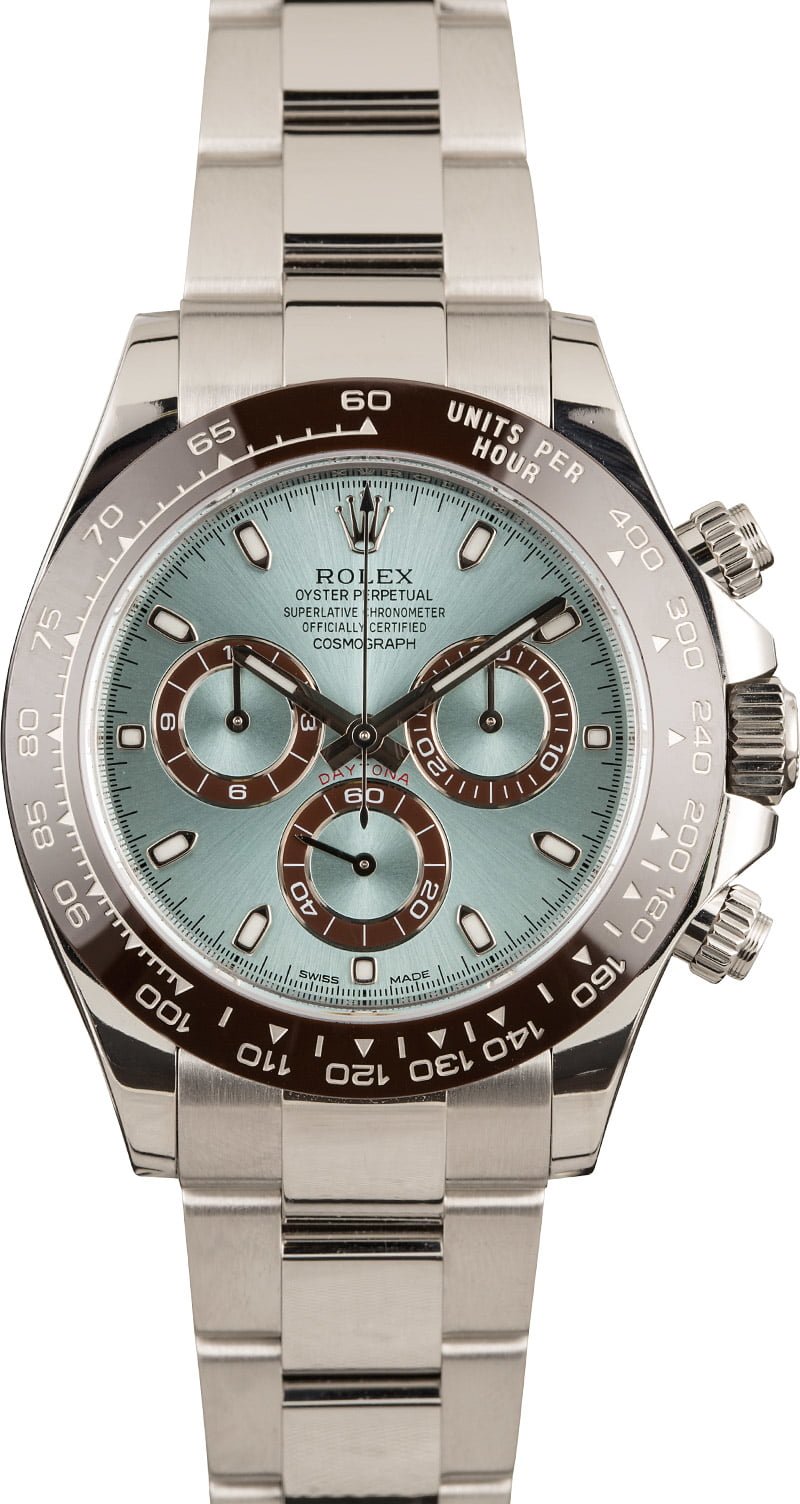 Rolex typically likes to come out with a special model to mark a milestone anniversary of a collection. And in 2013, Rolex introduced the platinum ref. 116506 to commemorate the 50th anniversary of the Daytona. This was the first platinum Daytona ever offered to the public (it’s rumored that Rolex made five platinum “Zenith” Daytona 16516 watches in 1999 at the request of then-CEO Patrick Heiniger) and the only watch to come fitted with a brown Cerachrom ceramic bezel. There’s also the familiar “ice blue” dial exclusively reserved for platinum Rolex watches, with a choice of standard lume-filled indexes or baguette-cut diamond hour markers. Adding major heft to the watch is the full platinum, solid-link Oyster bracelet. Anniversary Rolex watches always have the attention of Rolex collectors and the platinum Daytona is no different. 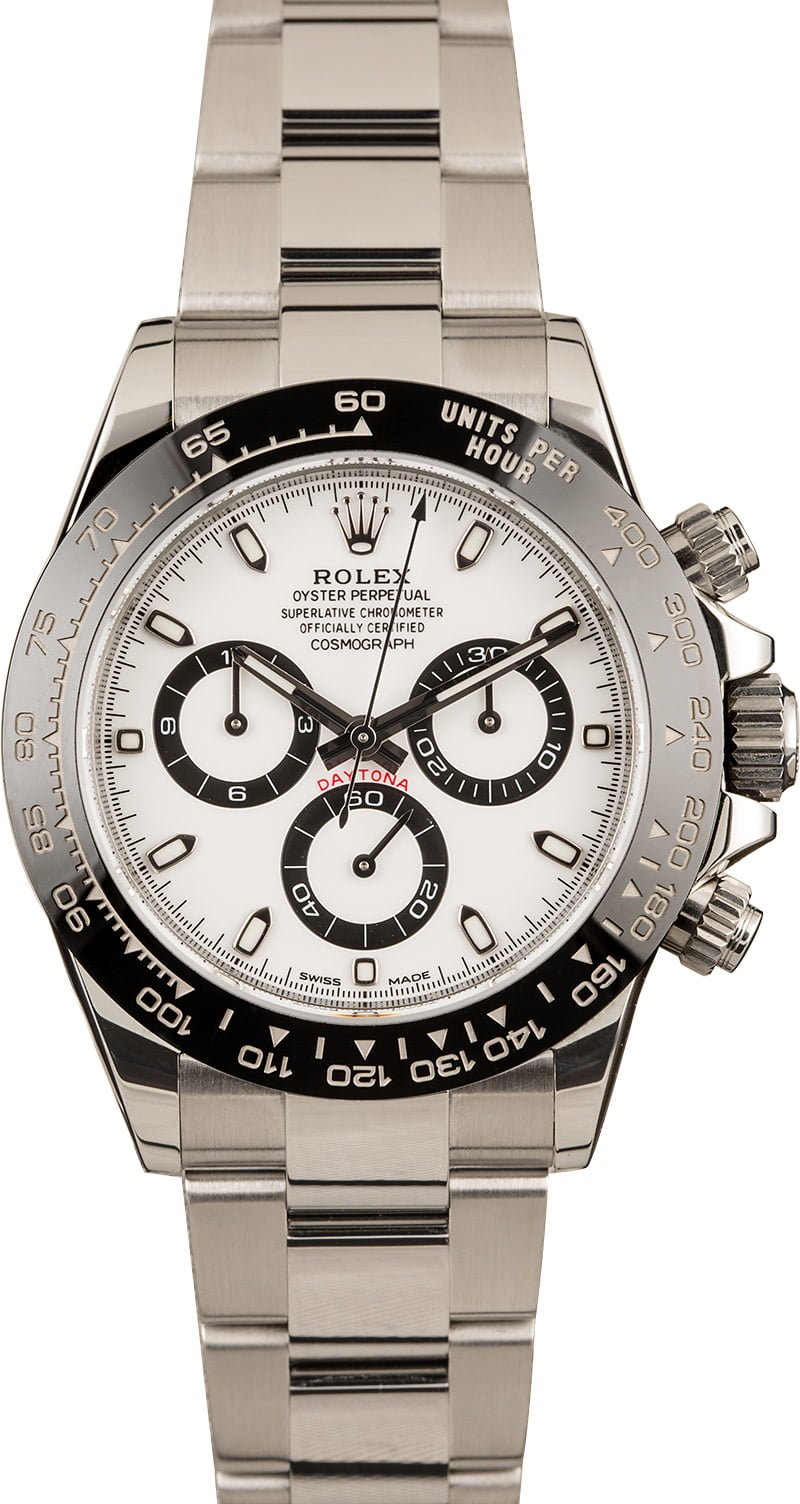 When Rolex introduced the first Daytona model with a Cerachrom ceramic bezel, it wasn’t long before Rolex enthusiasts were wondering when a stainless steel version with a black ceramic bezel would appear. After all, the Daytona lineup was no stranger to black bezels – several vintage steel Daytona references from the 60s, 70s, and 80s, came equipped with a black acrylic bezel. Finally, the wait was over with the launch of the Daytona ref. 116500LN in 2016. Featuring a 40mm steel Oyster case with a screw-down crown, screw-down pushers, a matching stainless steel Oyster bracelet, a black Cerachrom bezel, and as is customary with steel automatic Daytona watches, a choice of a white or black dial, the 116500LN has become the ‘it’ watch to own. The white dial version, also known as the “Panda,” of the 116500LN is especially prized for its similarity to a vintage Daytona 6263 with a white dial. Illustrating the collectability of the model, the Daytona 116500 is famously sold-out at ADs worldwide and is currently trading at roughly twice its retail price in the secondary market. 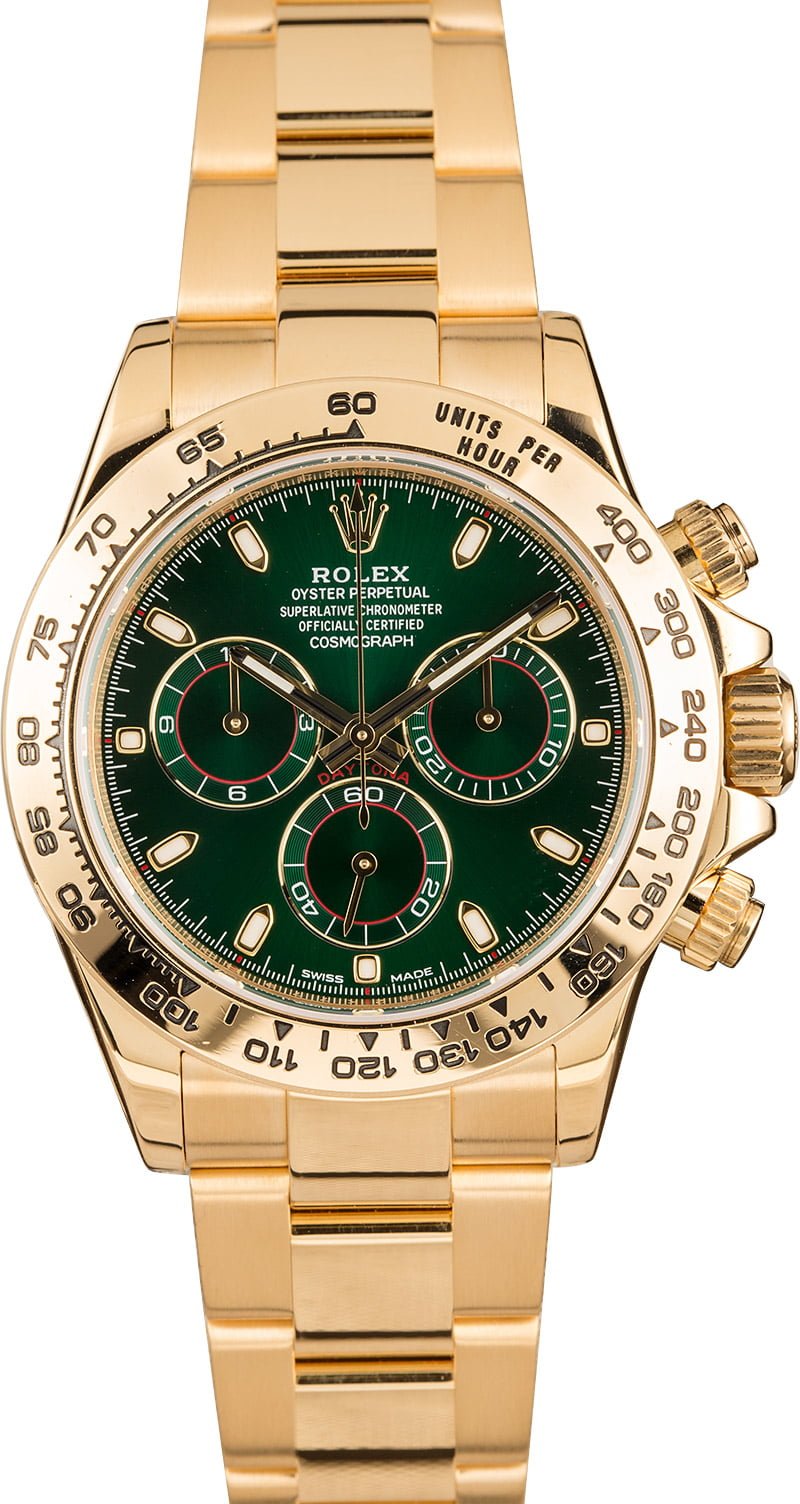 Endorsed by John Mayer, written about by the New York Times, and now out of stock in pretty much every Rolex boutique in the country, it’s safe to say that the Rolex Daytona ref. 116508 with the green dial is having a moment – despite the fact that its 2016 debut was overshadowed by the 116500LN. Solid yellow gold watches have always held a special place in Rolex’s lineup, as have models with green dials (the company color of Rolex). The Daytona 116508 is one of the few current-production Daytona watches without a ceramic bezel; it’s solid 18k yellow gold all the way from its 40mm case to its tachymeter engraved bezel to its iconic Oyster bracelet. By combining the popularity of the Daytona silhouette with the statement-making full yellow gold construction and the striking shade of metallic green for its dial, Rolex has yet another winning watch on their hands.

Which Rolex Daytona models speak to you the most? What would your top five picks be for your ultimate Daytona collection? Leave us your thoughts in the comments below. Don’t forget to visit our Rolex Daytona guide to learn more about the full collection.