First released in 1977, Rolex’s Oysterquartz watches, a series of models based around the bestselling Rolex Day-Date, Datejust, and Date watches. They were the company’s delayed, begrudging concession to the cheap and extremely precise electronic pieces flooding the market, which would go on to wipe out two-thirds of Switzerland’s traditional watchmaking houses by the end of the 1980s, in what became known as the Quartz Crisis.

Rolex had dabbled with quartz technology before, teaming up with around 20 other brands to form the CEH consortium (Centre Electronique Horloger) in the early ’60s in a desperate bid to generate a quartz movement of their own. The result was the Beta-21, completed in 1969, and launched the following year in watches from more than a dozen different manufacturers, with Rolex’s creation being the ref. 5100.

The Beta-21 was too big and awkwardly shaped to fit inside any of the existing Oyster cases Rolex had, and so legendary designer Gérald Genta (the man behind both the Audemars Piguet Royal Oak and the Patek Philippe Nautilus) was drafted in to build a watch around it. The then-enormous 40mm model shared definite similarities with those two iconic pieces, notably in its slab-sided case and integrated bracelet.

While the ref. 5100 was unquestionably the most accurate watch Rolex had ever made and the initial 1,000 examples sold out in pre-order despite also being the brand’s most expensive to date, there were simply too many points working against it to see it put into full production.

Firstly, without the Oyster case, the new quartz watch couldn’t boast the same superior water resistance that had helped forge Rolex’s reputation. Additionally, the Beta-21 movement ran out of power very quickly, and in addition to all of that, the exact same movement was also being used in a host of watches made by Rolex’s competitors. Then as now, Rolex was ferociously independent, and in 1972, Rolex broke away from the CEH, retreated to its Geneva compound, and got to work on producing a quartz caliber of its own. 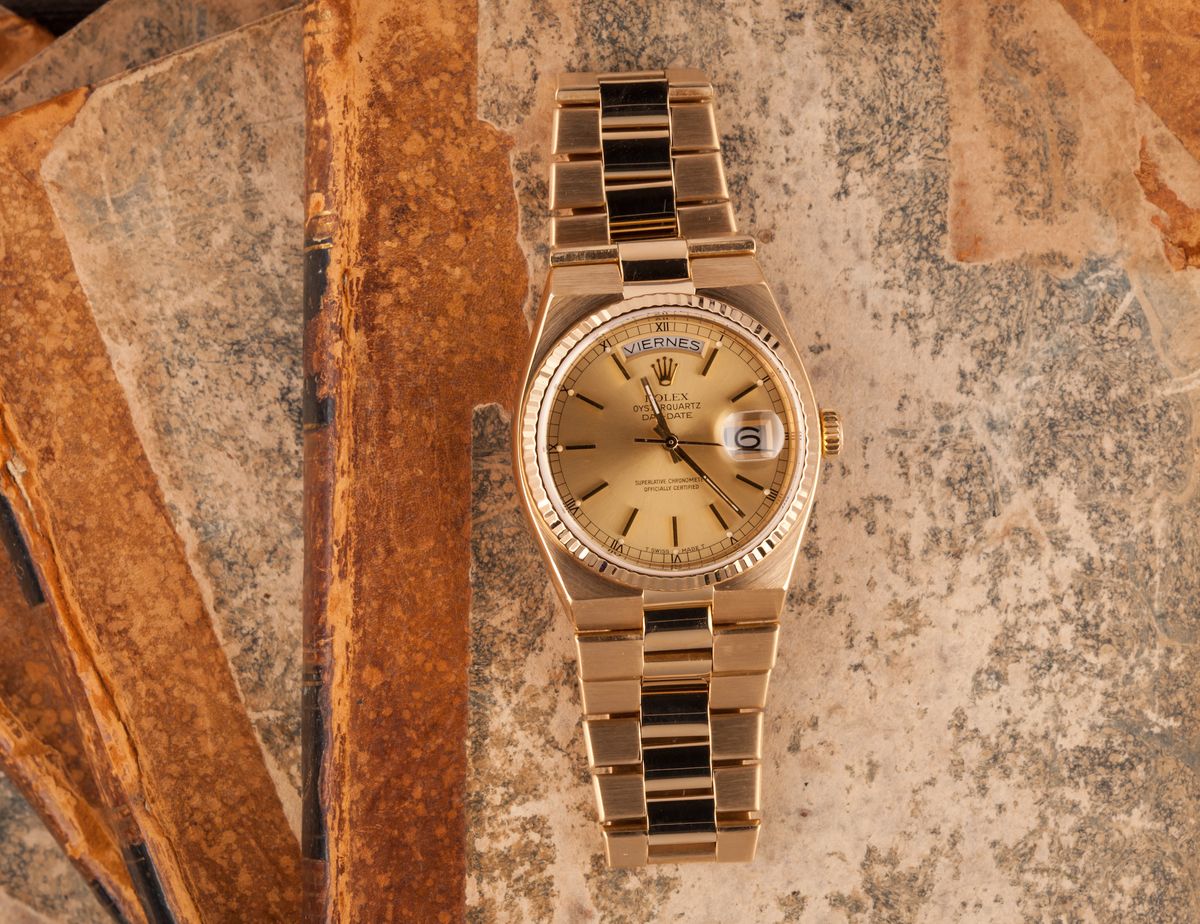 Five years later, Rolex emerged with two quartz movements. The Cal. 5035 was fitted inside quartz-powered Datejust and Date watches, while the Cal. 5055 was used to power the equivalent Oysterquartz Day-Date.

Rather than trying to reinvent the wheel, both movements shared many of the components which were inside the new generation of traditional calibers produced to power the recently-released mechanical versions of each watch, the Cal. 3035 and Cal. 3055. In fact, the entire drive mechanism was based on the concept of a conventional escapement, as were the gear train and pallet assembly, and with the exception of the pulse motor and electronics, the movements were all largely identical.

However, the performance was another matter entirely. Rolex used an oscillator four times faster than the one found in the Beta-21, as well as a thermistor, making it one of the first analogue thermo-compensation movements ever built. 18-months after their introduction, the brand sent the Oysterquartz calibers off to the COSC for the first time (after altering the shape of the crystal) where they easily surpassed the incredibly stringent accuracy parameters of +/- 0.2 seconds a day. While no official data has been released (this is Rolex, after all) it is believed the movements had an average variation of just 50 seconds a year. 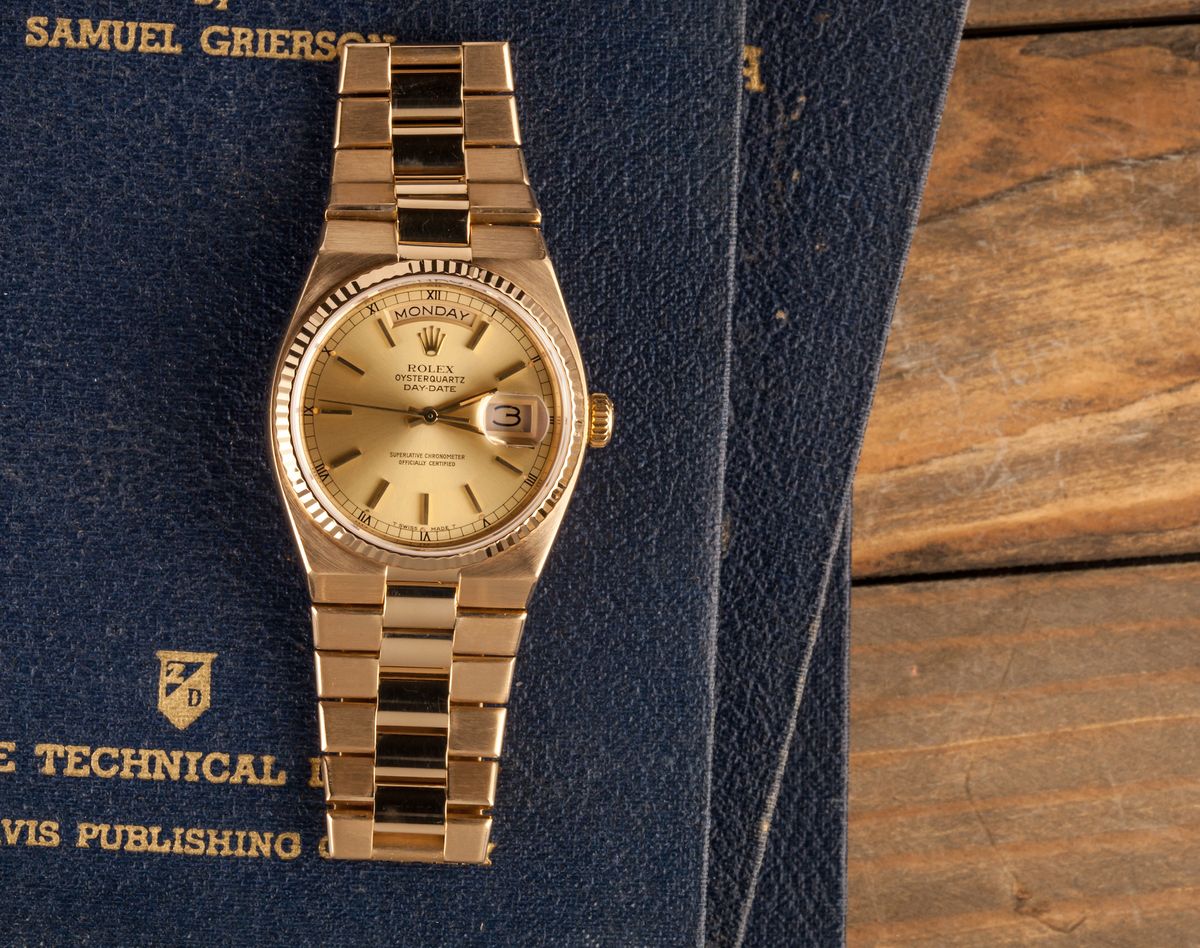 The technology was unlike anything the brand had made before, as were the watches containing it. The quartz-powered Datejust, Date, and Day-Date all followed the basic architecture of the Genta-designed ref. 5100. However, the in-house calibers were significantly smaller than the Beta-21, and so were able to fit into a specially-devised 36mm Oyster case, with all its water-resistant abilities intact.

Andre Heiniger, Rolex’s CEO at the time, was adamant that no one mistake the electronic versions of his world famous watches for their mechanical counterparts. As a result, they were given the sharp, angular profiles that were very much of the 70s era, leaving both watches looking far larger and bolder appearance on the wrist.

The Oysterquartz Day-Date was only ever cast in yellow or white gold, with no rose gold or platinum as you will find on the traditional pieces. The premium offering from the brand, it was issued in a number of different varieties, some relatively plentiful now on the pre-owned market, others incredibly rare. Rolex made just 25,000 quartz watches in total, spread across all three collections, from 1977 to 2003, leaving some of the numbers for the more rare examples in the mere handful.

Below, we give a quick rundown of the 12 Rolex Day-Date Oysterquartz references. 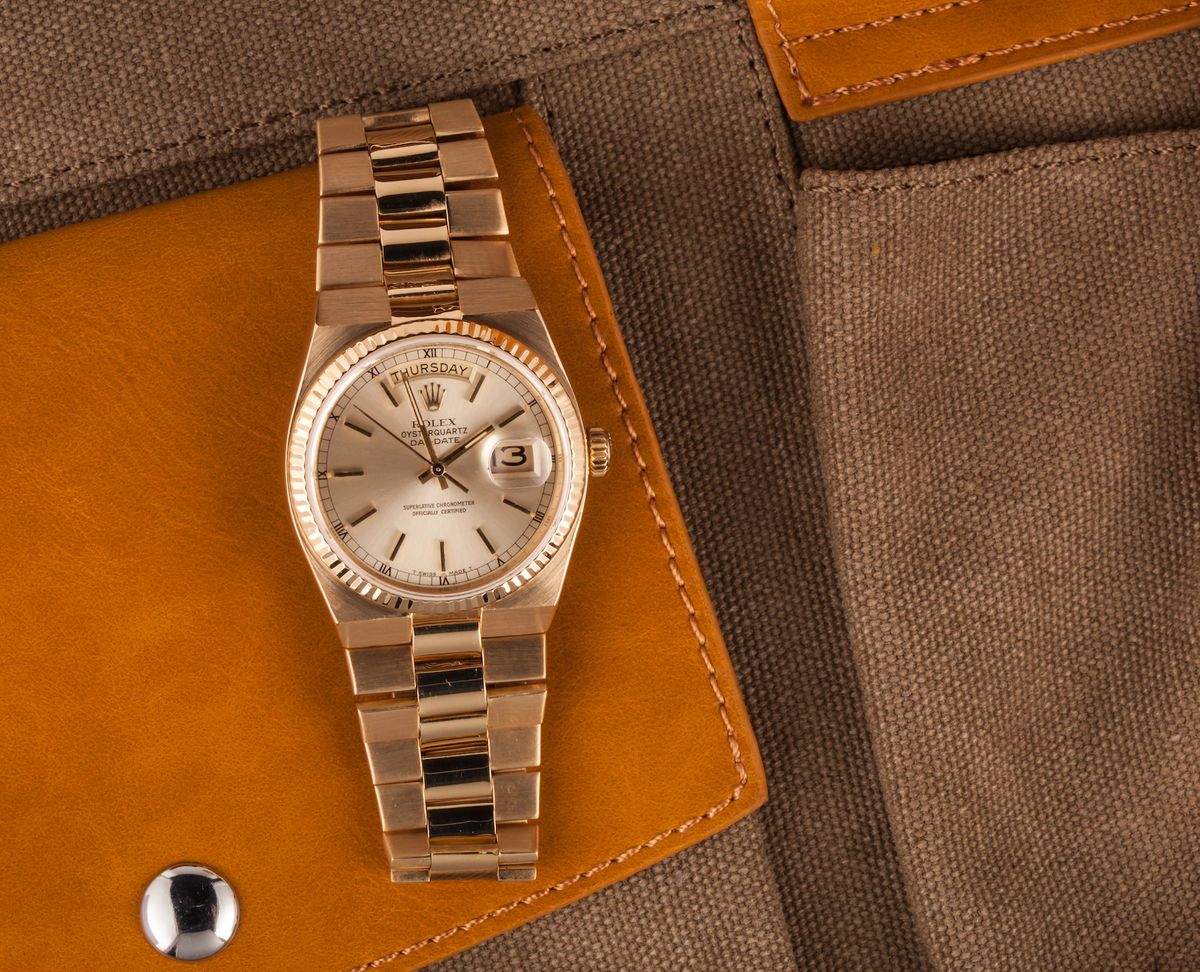 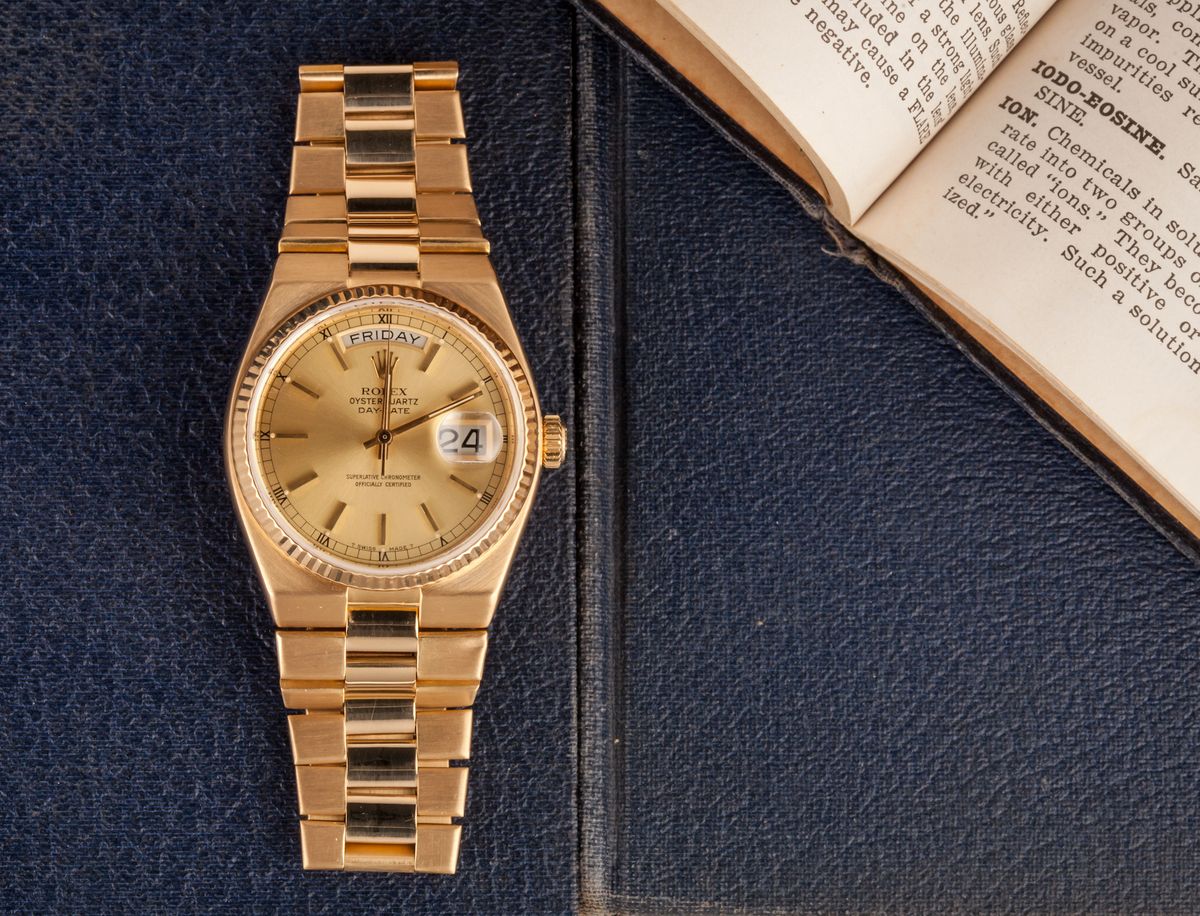 While Rolex clearly only engaged with the world of quartz out of sufferance, it can’t be said the brand was at all half-hearted about the whole thing. Not only did Rolex create two of the finest quartz calibers of their time, still regarded as groundbreaking today, but the watches selected to house them were among the most distinctive and pioneering in the brand’s history.

Visually distinct, and rare in number, Rolex Day-Date Oysterquartz watches are unlike any other models that the brand has ever put forward. Quartz movements often get a bad reputation for being cheap, as the majority of examples you will encounter and inexpensive and entirely uninspiring (even if they are remarkably reliable). However, the quartz movements used to power Rolex Oysterquartz watches are technological marvels that are finished and decorated to the same exacting standards as Rolex’s mechanical movements.

The Rolex Oysterquartz Day-Date President is fast becoming a vintage collector favorite, with prices rising rapidly in recent years. For something a little out of the ordinary and sure to garner attention, they are well worth considering adding to your collection.