Kobe Bryant is a basketball legend — having played for the Los Angeles Lakers for twenty years, he earned the title of All-Star 18 times, joined the All-NBA team 15 times, and won 5 championships during his two-decade career. But while his talent made him a household name, his stardom quickly transcended the court — landing him on the cover of countless magazines, and scoring exclusive sponsorships.

While his wife, Vanessa Bryant, has been seen with a plethora of Rolex watches, Kobe is loyal to one brand. The NBA All-Star joined the exclusive ranks of the Hublot team back in 2013 to sponsor their timepieces and later on create a handful of watches with the famous brand. Today, it’s one of the most famous sponsorships on the planet. 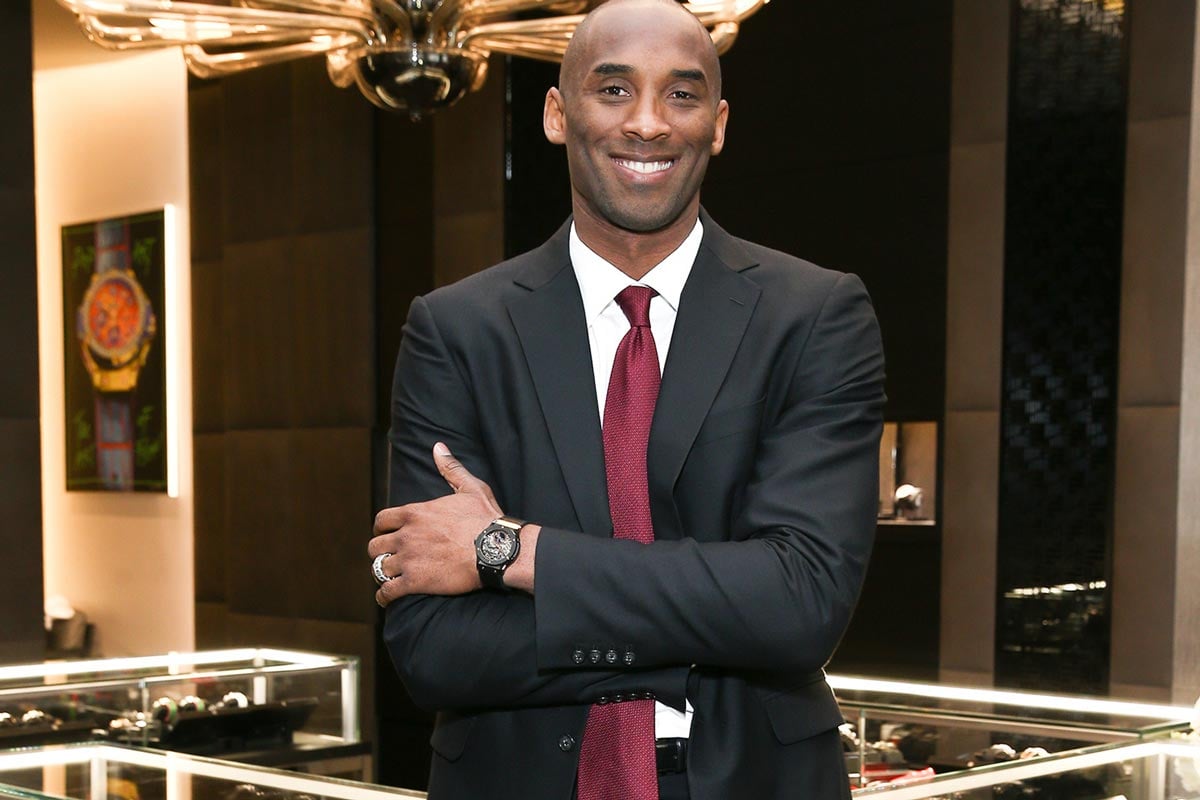 This watch may possibly be the last Kobe Bryant Hublot.

As we see it, Hublot doesn’t get enough credit for expanding the scope of watch sponsorships. Over the years, the world-famous brand was one of the first to brand out beyond the tennis stars, race car drivers and occasional polo players and sailors. Hublot began by sponsoring soccer teams and later expanded into basketball — scoring some of the world’s best players like Bryant himself.

The partnership came after Bryant had collaborated (and apparently invested) with the boutique luxury brand Nubeo, a Swiss watchmaker that subsequently went under during the recession. Nubeo and Bryant had actually partnered to create their own Black Mamba watch, but it never got quite off the ground. It was said Bryant was excited about the partnership because of the brand’s keen attention to detail, and when Hublot came knocking not long after, it seemed like the perfect next step — especially with a company that had such a strong and innovative reputation. 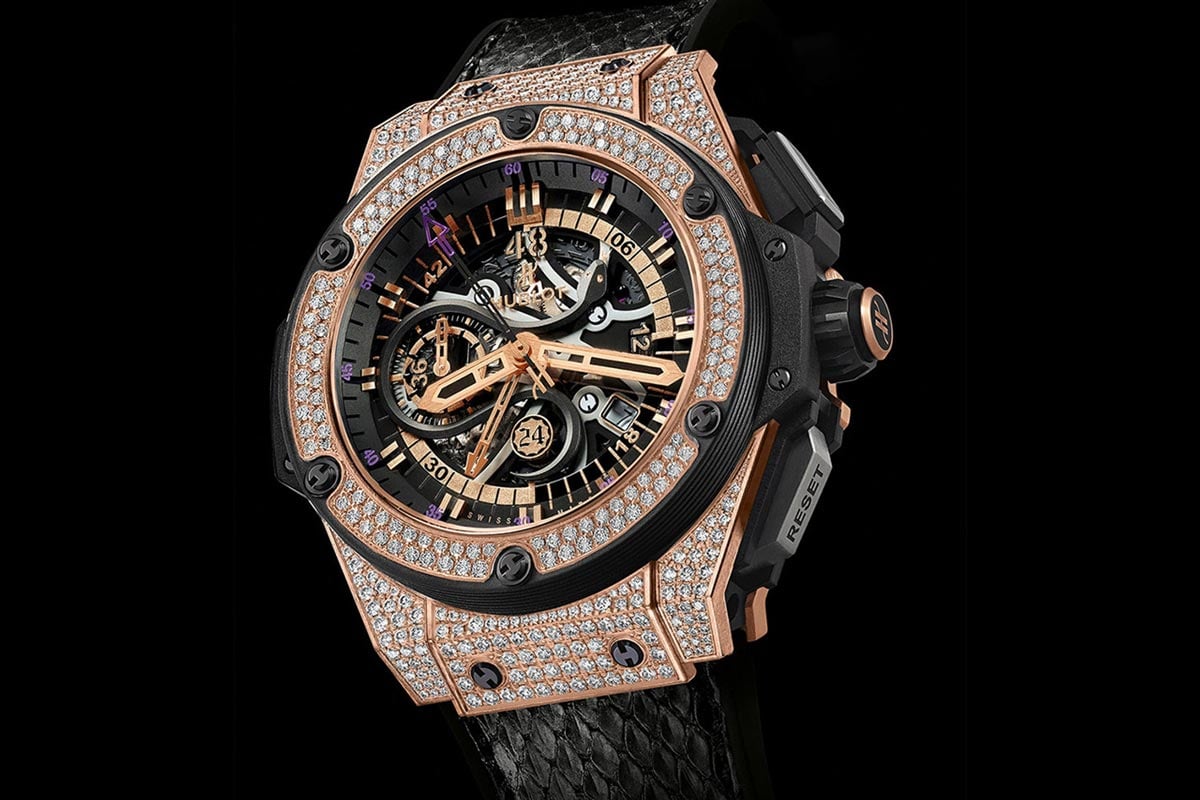 Covered in diamonds, this chronograph is just as pretty as it is skillfully made. (Credit: Hublot)

The first Black Mamba watch released by Hublot and Bryant was back in 2013. The watch is outfitted with the HUB 4248 self-winding, 28 jewel, mechanical chronograph Movement, housed within an oversized 48mm black ceramic case. Like the athlete, this watch can take the heat — titanium and resin composites combined to make this watch as durable as it is sleek. But it’s the face of this watch that draws you right in — black, gold, and purple were used as a homage to the Lakers, the stunning mechanics of the watch peeking through the face. A snake applique was also added for an extra touch luxury. And down at 6-o’clock, you’ll see a ’24,’ a nod to Bryant’s famous number. Did we mention there’s a python snake strap bracelet, too? Only 250 of these beauties were ever released and then went in the $20-thousand range. Certainly a hefty price tag like the watches produced between Floyd Mayweather and Hublot. 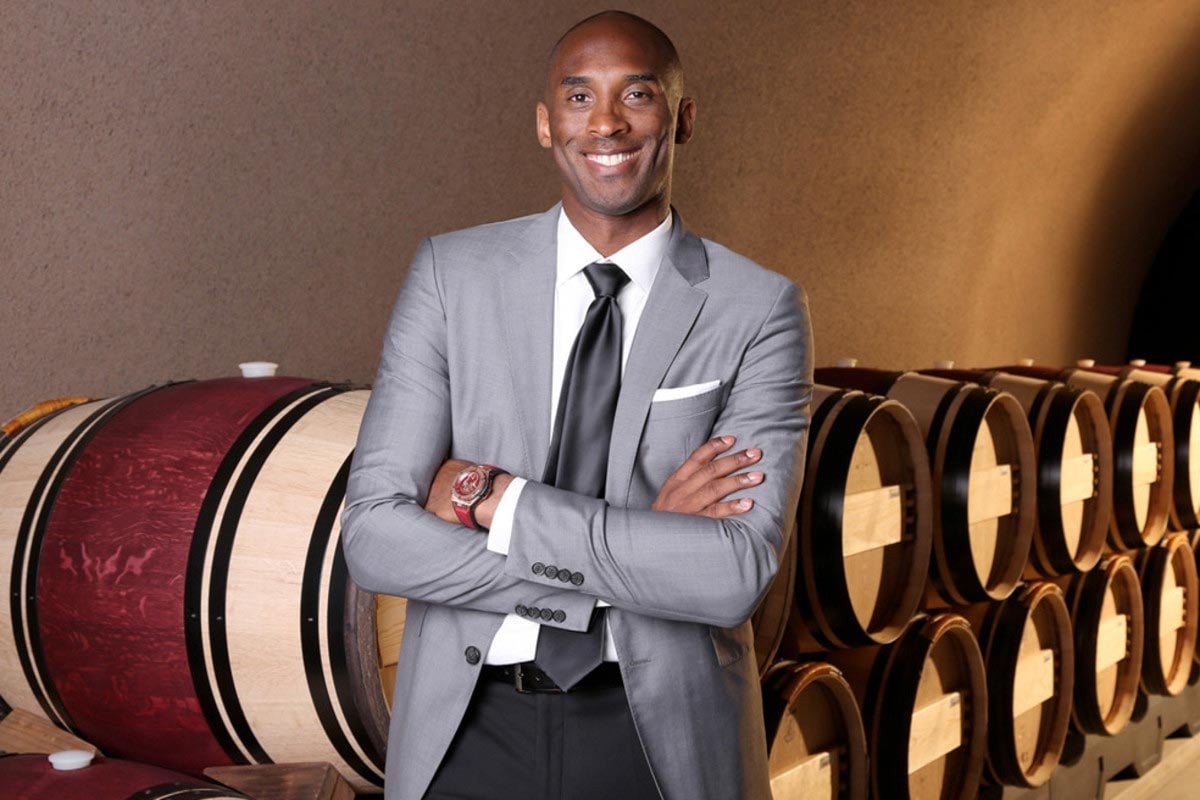 Inspired by the wine industry here is another timepiece worked together by Hublot. (credit: Hublot)

Bryant joined the Hublot team for their uniqueness in the luxury market, and that shines through in their 2015 Big Bang Unico Retrograde Chronograph Kobe “Vino” Bryant. Like the first watch created in his honor, ‘Vino’ is off of another one of the basketball player’s nicknames. Like a fine wine, Bryant explained he’s getting better with age. And well, that’s hard to argue with when looking at this watch created just for him.

The most striking aspect of the watch is the Bordeaux red face, and the raised, 47mm, 18k gold and black ceramic bezel. Under the face is a Hublot Unico caliber HUB1261 automatic movement, comprised of 385 parts, that you can peer at through a green-tinted sapphire crystal on the back. The face of the watch almost looks like a basketball with a bumpy texture added to add dimension and allude to the mogul’s famous basketball career. The dial itself is also distinctive with subdials over 6 and 9-o’clock, as well as a chronograph complication with retrograde hands that move from left to right then jolt back to the starting point. 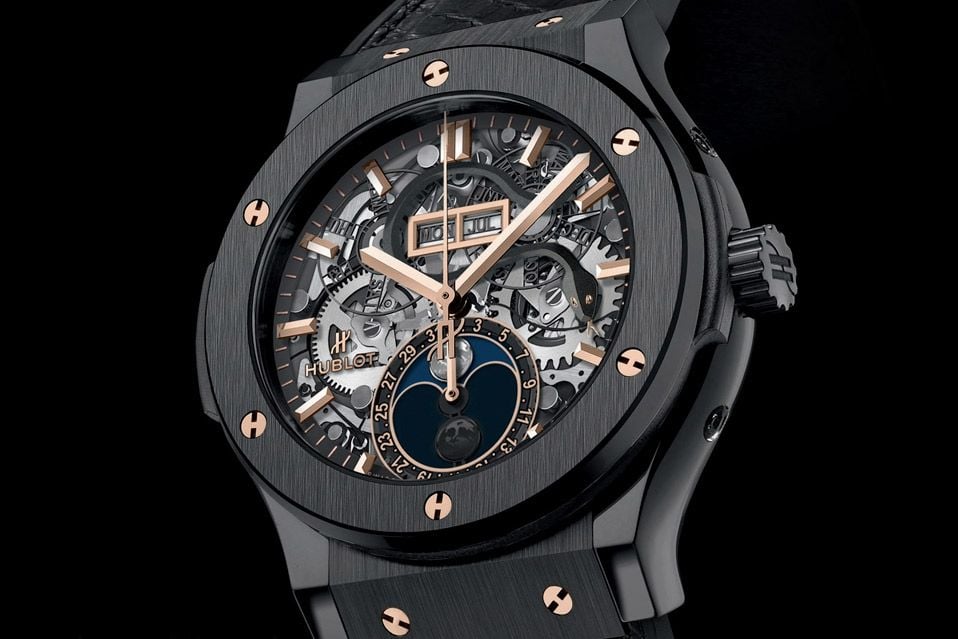 The Kobe Bryant Hublot Hero Villian. What are your thoughts on Kobe Bryant? Comment below.

Just 24 Classic Fusion Kobe Bryant HeroVillain’s were ever released, yet another homage to Bryant’s jersey. And like the other two watches before, this watch is a homage to Bryant himself — as both a basketball player and an icon. Released at the end of his 20-year career, the Hero Villan plays on Bryant’s heroic determination to dominate the sport, but his toughness that often meant stepping over other considerations to climb his way to the top.

The watch itself is a beautiful juxtaposition of such perceptions, contrasting a black ceramic bezel against a lustrous face. Like the Black Mamba, you can look into the moonphase movement from the face of the watch — it also features a black snake applique and a sapphire case-back inscribed with a KOB16 logo.

What are your thoughts on the watches that were produced between Kobe and Hublot? Comment below.