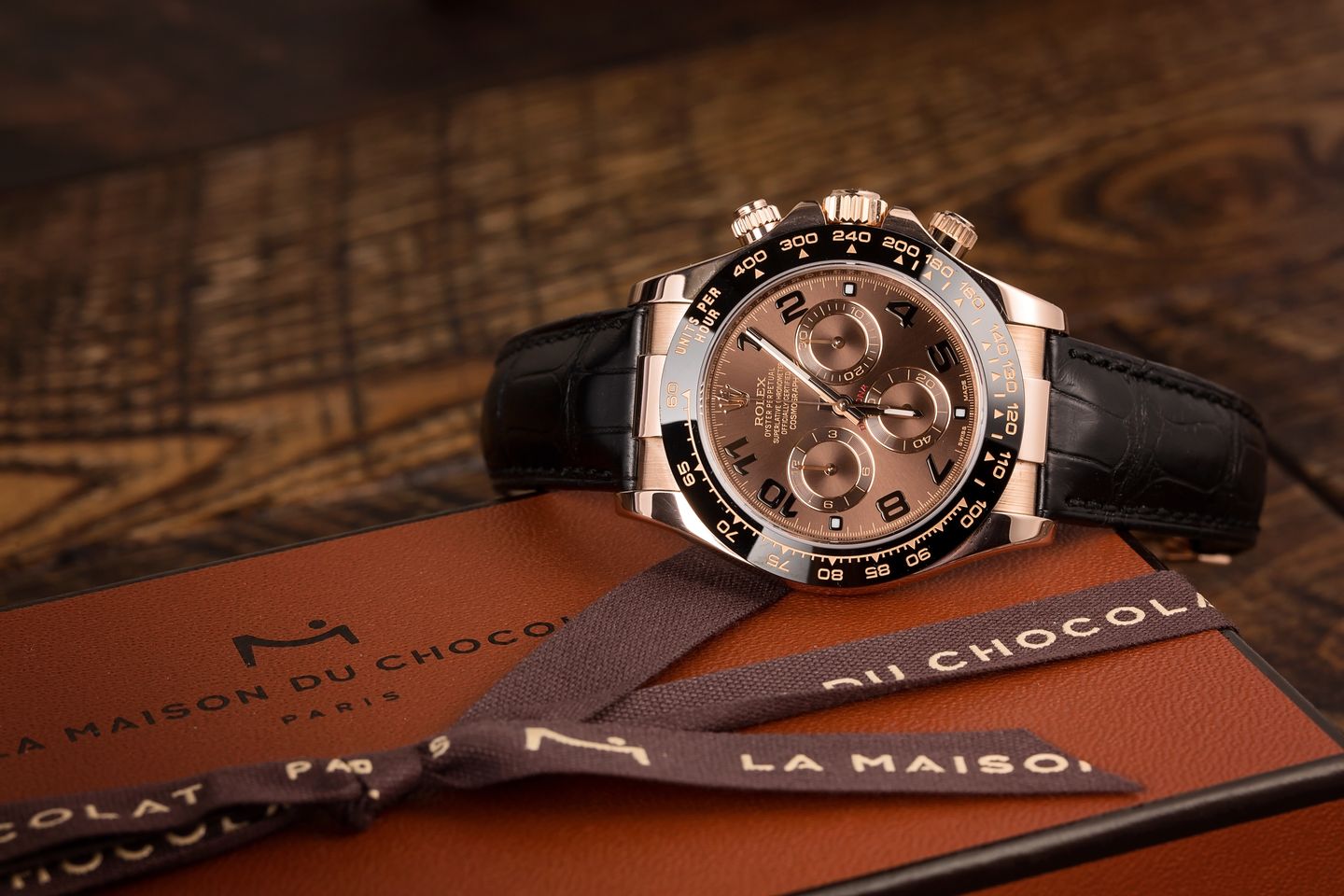 In 2005, Rolex presented a patented rose gold alloy called Everose gold. With a mix of gold, copper, and platinum, Rolex claims that Everose will outlast standard rose gold in terms of color and luster. Since then, the Swiss watchmaking giant has dished out plenty of Everose gold models and in 2008, the very first Everose gold Daytona joined the collection – the ref. 116505 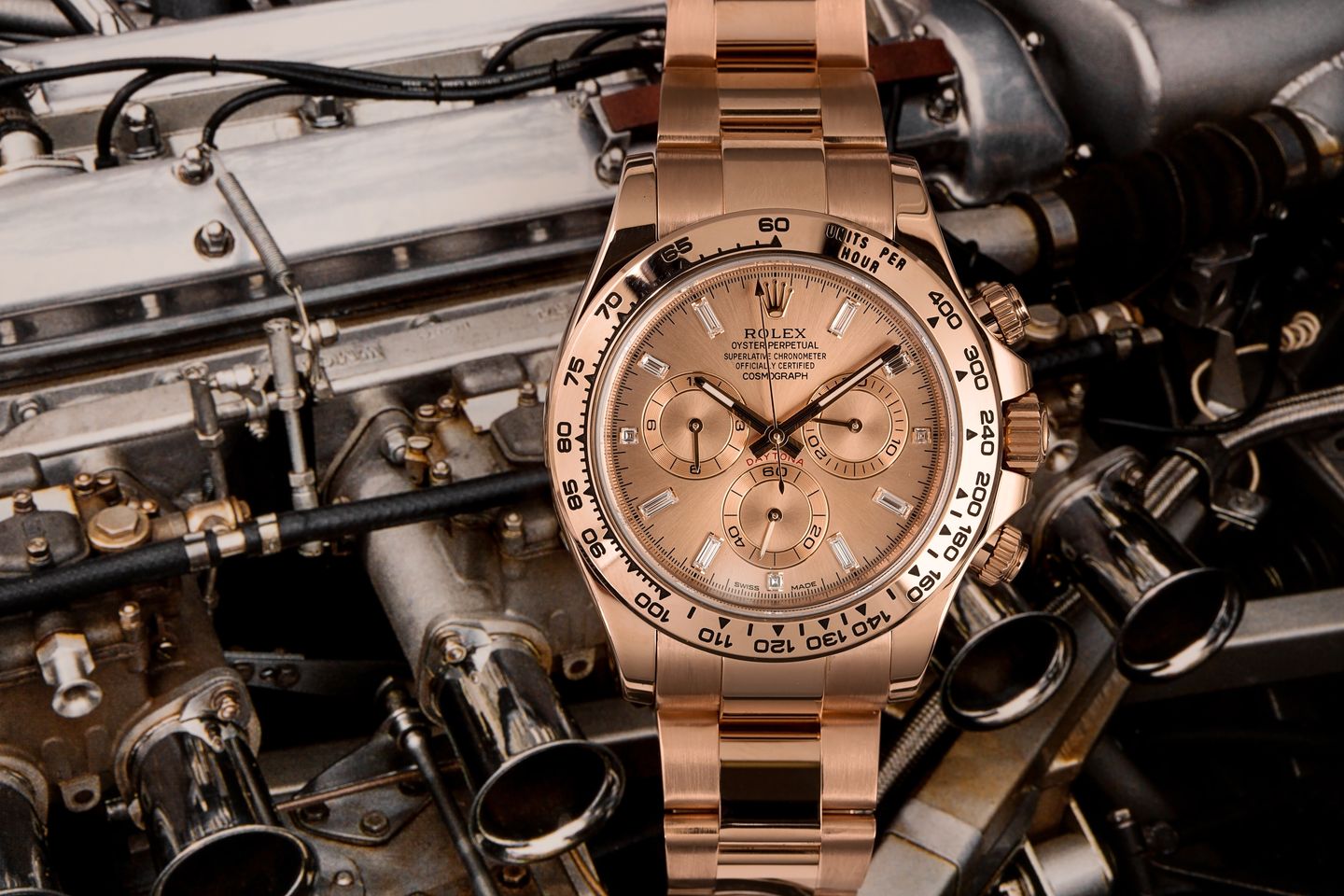 The ref. 116505 was the first Everose gold Rolex Daytona.

Like other modern Daytona watches, the Everose gold Daytona ref. 116505 sports a 40mm case fitted with screw-down chronograph pushers and a screw-down winding crown. On top of the 18k Everose gold case of the Daytona 116505 is a matching Everose gold bezel, engraved with the handy tachymeter scale. There are a few dial colors to choose from including black, ivory, rose gold, and chocolate brown; some even boast baguette diamond hour markers. The dial layout retains the familiar Daytona face with the trio of registers at 3, 6, and 9. Finishing off the look of the ultra-lavish Everose Daytona ref. 116505 is a full Everose gold Oyster bracelet, complete with solid center links.

2005 was a big year for Rolex material innovation, as that was the same year that the brand unveiled Cerachrom – a proprietary ceramic alloy that is both scratch and fade resistant. In 2011, Rolex paired Everose and Cerachrom on its flagship chronograph watch to give us the Daytona ref. 116515. 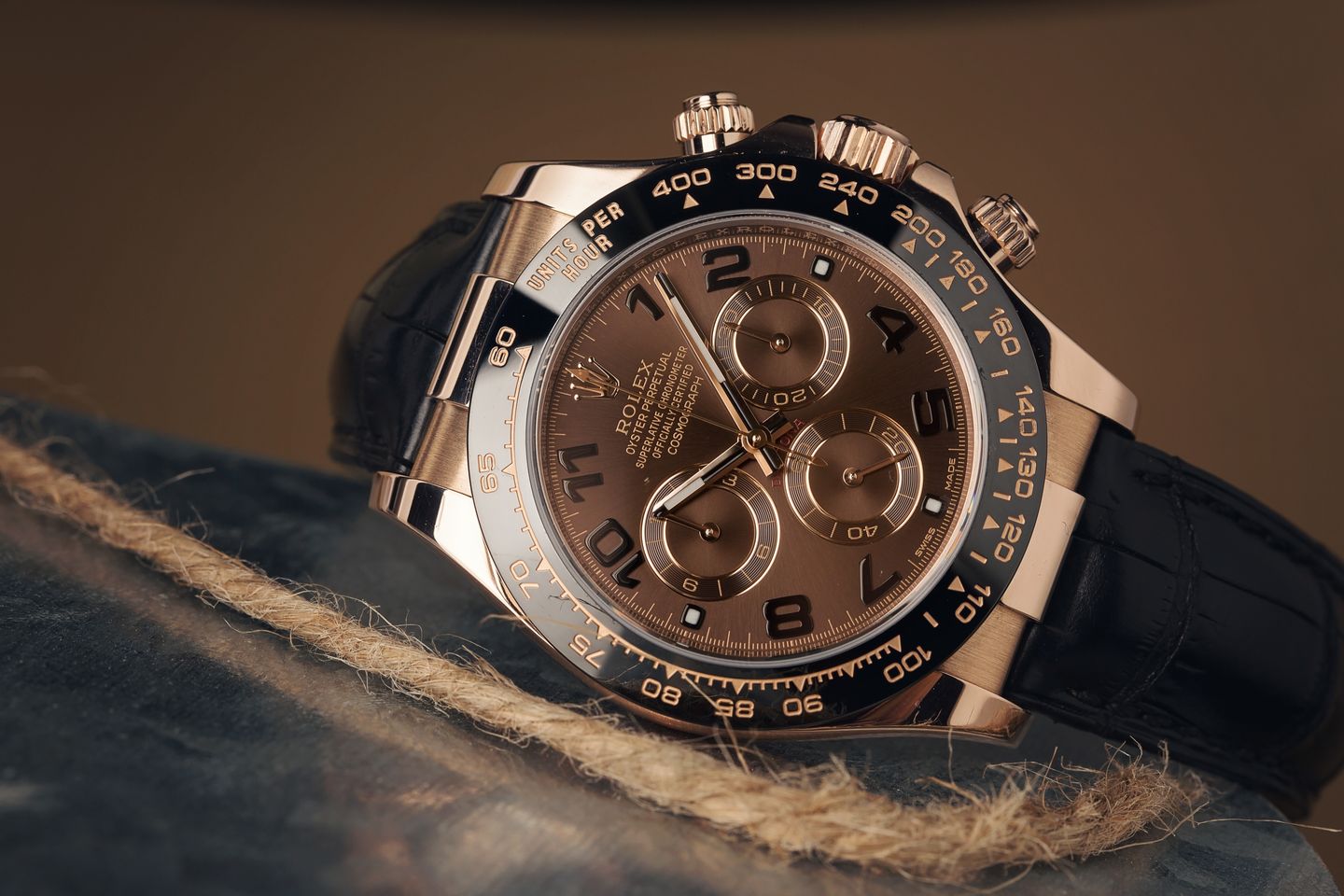 The Everose Daytona ref. 116515 has a black Cerachrom bezel, and comes fitted on a black leather strap or Oysterflex bracelet.

Instead of an engraved pink gold bezel, the Everose Daytona ref. 116515 features a black Cerachrom ceramic bezel with Everose gold markings. Dial shade choices are similar to the Daytona 116505 but bracelet options are vastly different. Rather than a gold Oyster bracelet, the Daytona 116515 was first fitted with a leather strap equipped with a solid Everose gold deployant clasp. However, in 2017, Rolex replaced the leather strap with yet another invention, the Oysterflex bracelet (also with a solid Everose gold deployant clasp). The Oysterflex bracelet may look like a rubber strap but it is actually a metal blade covered in black elastomer. 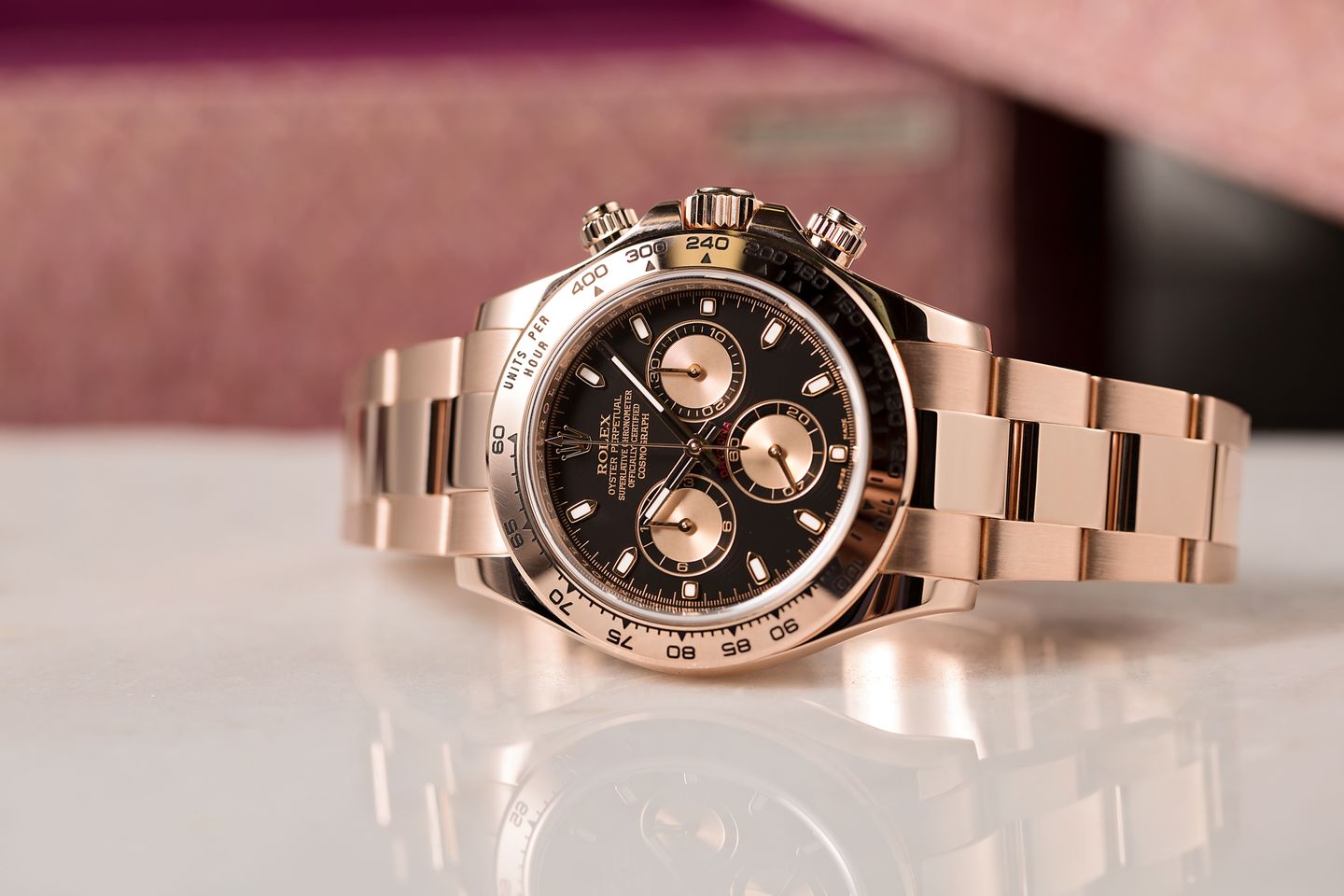 The ref. 116505 Everose Daytona has a matching Everose bezel and Oyster bracelet.

For me, the more pink gold the better, so my vote is for the full Everose gold Daytona 116505. Although the Daytona 116515 is certainly a good-looking chronograph, I find that the black band (whether Oysterflex or leather) and black bezel takes too much attention away from the rosy-hued precious metal. 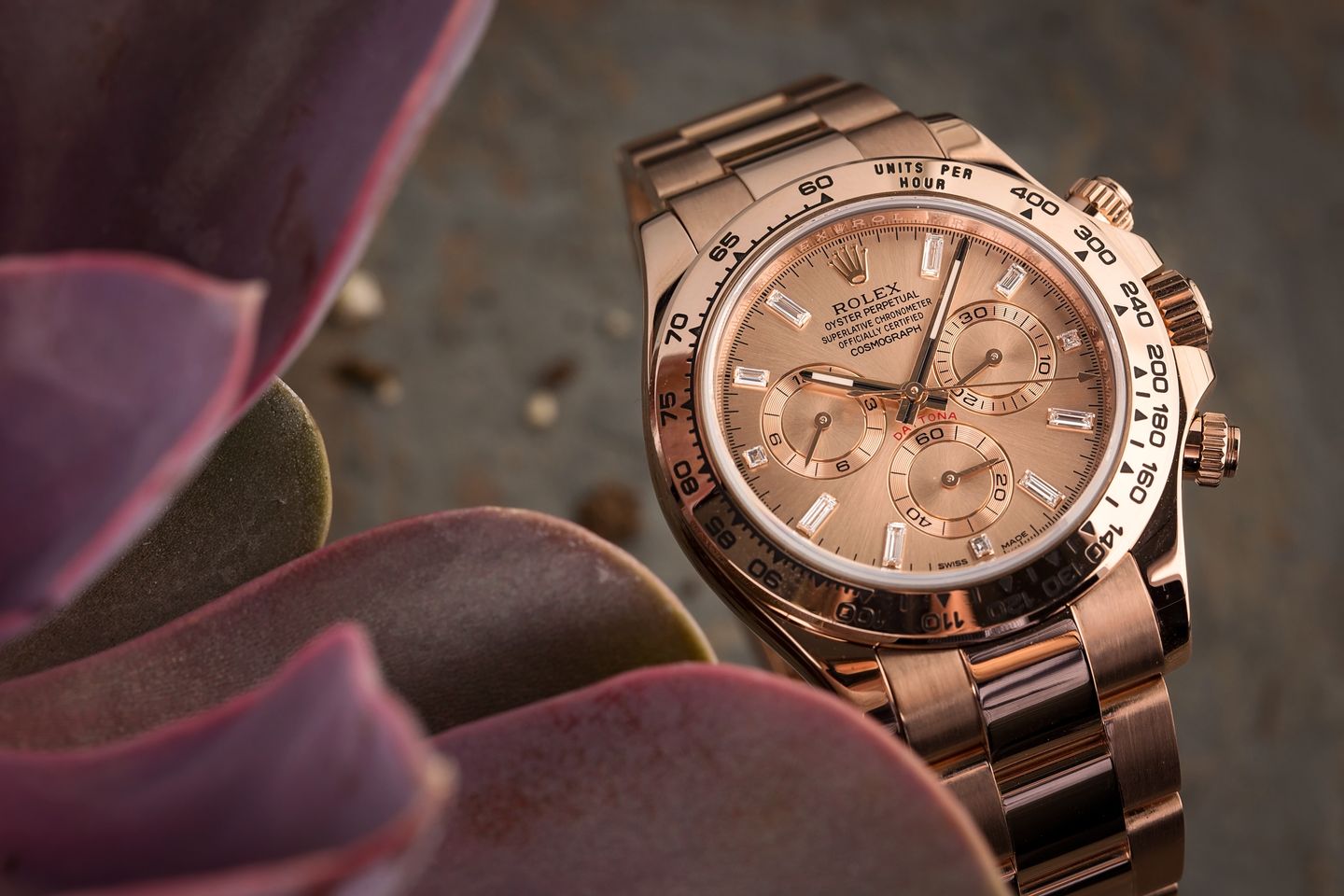 The ref. 116505 Everose Daytona fully embraces the warm hue of its material, and is unmistakably a rose gold watch.