As it does every year, Rolex introduced a fleet of new models for 2022. And one of those new releases was the Air-King 126900. While the Rolex Air-King name is certainly not new to the brand’s catalog – it has been around since the end of World War II – the reference 126900 is the newest addition to the collection.

If you only got a glance at the Air-King 126900, you wouldn’t be blamed for thinking it was essentially identical to the previous Air-King 116900 that it supplanted. However, a closer review does reveal a few notable updates that alter the way the Air-King wears and performs. In true Rolex fashion, it’s not about revolutionary changes but rather, thoughtful design tweaks that illustrate that there’s always room for improvement.

So if you’re keen to know what’s new and what isn’t with the new reference 126900, keep reading for a comprehensive overview of the latest Rolex Air-King that was released in 2022. 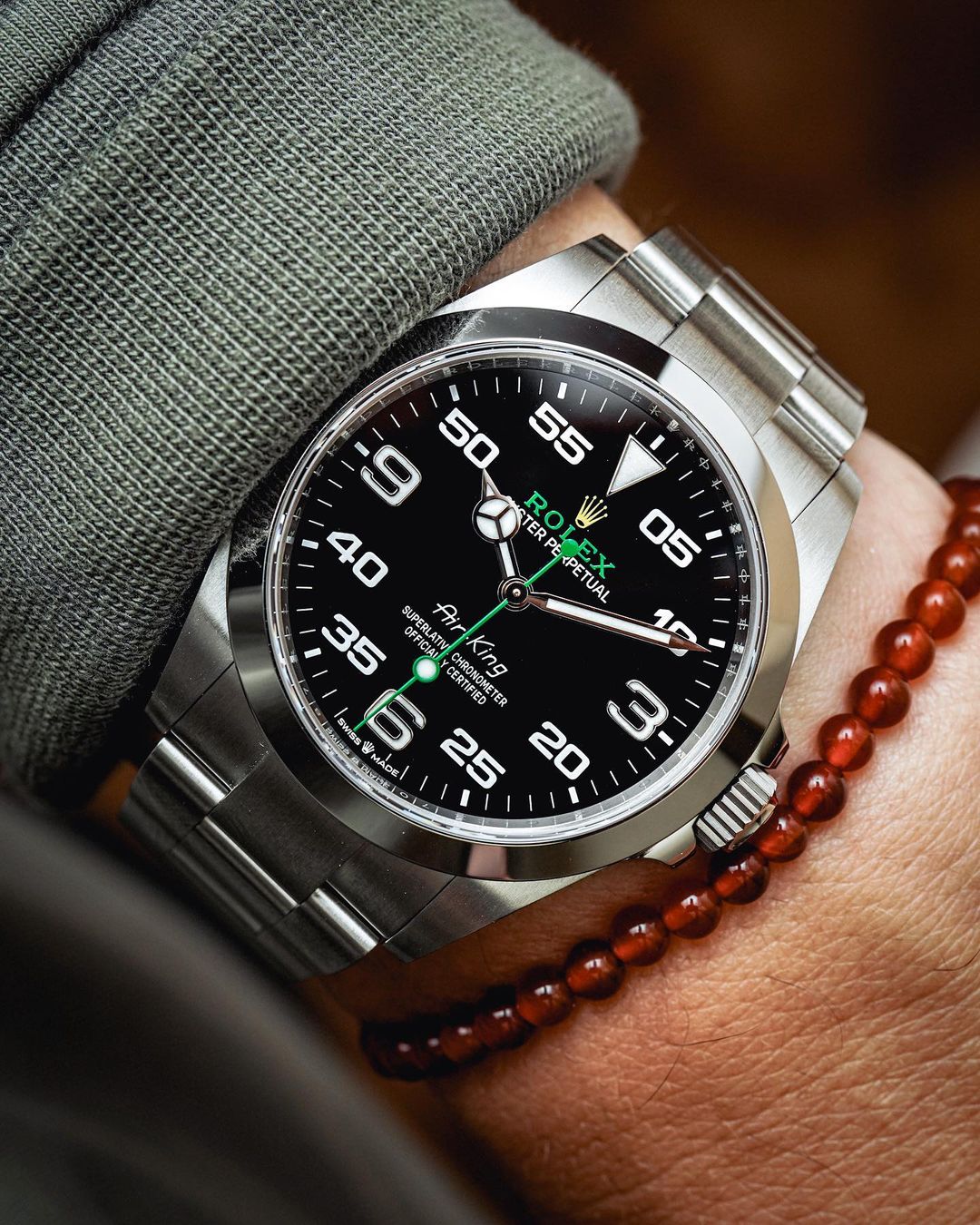 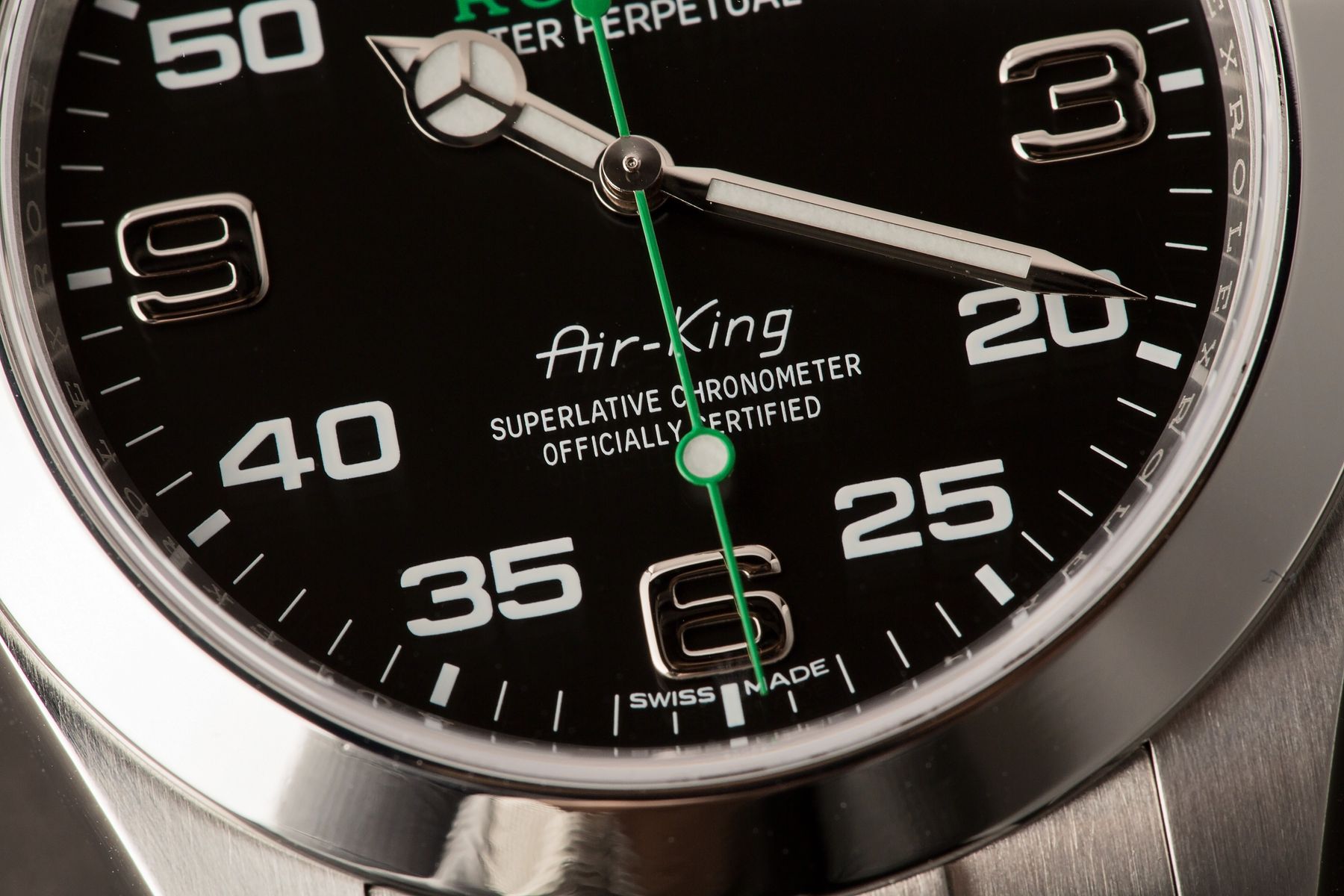 The ref. 126900 replaces the ref. 116900, which debuted in 2016. For context, it’s important to note that the 116900 brought about a whole new design for the Rolex Air-King, including a new and larger 40mm size, as well as a redesigned black dial (inspired by the Bloodhound dashboard) that includes both minute and hour markers. It’s also interesting to point out that, unlike other Rolex collections, the current Air-King is a one-reference line – which is to say, there are no options for materials, dial colors, or bracelet styles.

The latest Air-King retains the same 40mm case diameter, dial color, Oyster bracelet, and steel construction of its predecessor. So what’s new with the Air-King 126900?

First of all, if we look at the case, we see that Rolex has equipped the 126900 with crown guards. The Oyster case is also slightly flatter and slimmer. Second, if we zoom in on the dial, we notice that Rolex has added a “0” before the 5-minute marker for better balance with the rest of the two-digit minute markers. Additionally, the hour markers at 3, 6, and 9 are now coated with Chromalight luminescent material so they can also glow in the dark. Staying on the dial for another moment, Rolex has also added its crown logo between SWISS and MADE, just below the 6 o’clock marker

The presence of that small crown logo signals a new movement inside the Air-King 126900, which is the Caliber 3230. Part of Rolex’s newest generation of movements, the Caliber 3230 is the time-only (no date) variant of the popular Cal. 3235 that can be found in models such as the Datejust and Submariner. The Cal. 3230 is COSC certified, accurate to +/-2 seconds per day, and supplies the Air-King 126900 with 70 hours of power reserve.

Finally, another new update that the Air-King 126900 benefits from is a revamped Oyster bracelet with slightly wider center links. The biggest change to the bracelet, however, is the addition of the sturdy folding Oysterlock safety clasp, complete with the Easylink 5mm extension system. 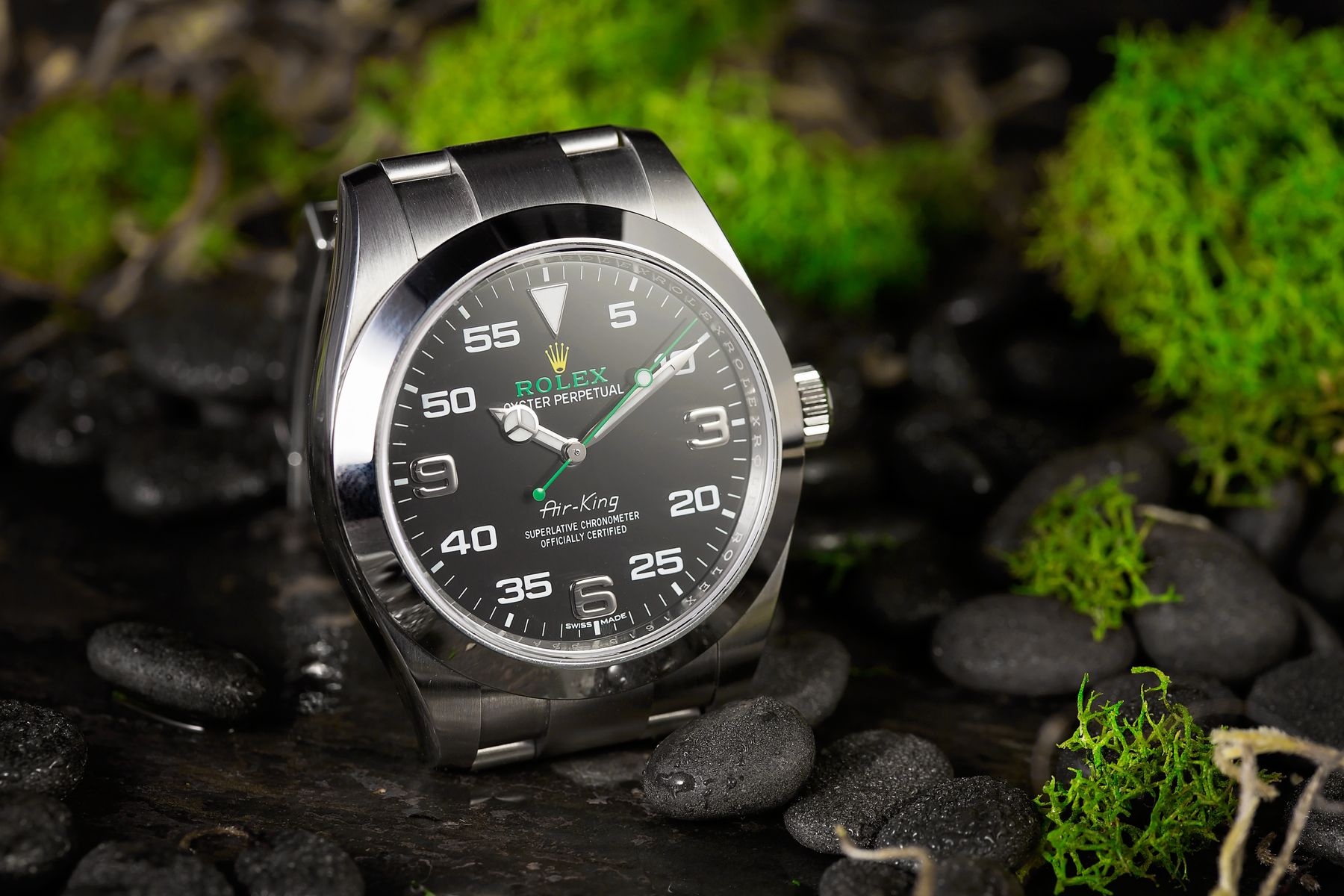 With the release of the latest Air-King, it’s only normal to wonder how the reference 126900 vs. 116900 stack up against each other. As mentioned, Rolex added a handful of updates and improvements to the Air-King ref. 129600, but really, how different is the new version from the discontinued one?

Both the Air-King 126900 and the Air-King 116900 sport 40mm Oyster cases with Twinlock screw-down crowns and are water-resistant to 100 meters or 330 feet. The cases include smooth bezels, sapphire crystals, and screw-down case-backs. Furthermore, both versions come with black dials, which include a yellow and green Rolex logo, a green seconds hand, a Mercedes handset, and a combination of both hour and minute markers.

Like the reference 116900 that came before it, the new ref. 126900 Air-King is also fitted with a sporty three-link Oyster bracelet. Finally, both generations of the 40mm Rolex Air-Kings are automatic time-only watches.

When it comes to design, the major differences between the ref. 116900 vs. 126900 are found on the case, dial, and bracelet. Compared to the previous model, the newer version includes crown guards on the case, lume-coated hour markers on the dial, the addition of “0” at five minutes, wider links on the bracelet, and an improved clasp. 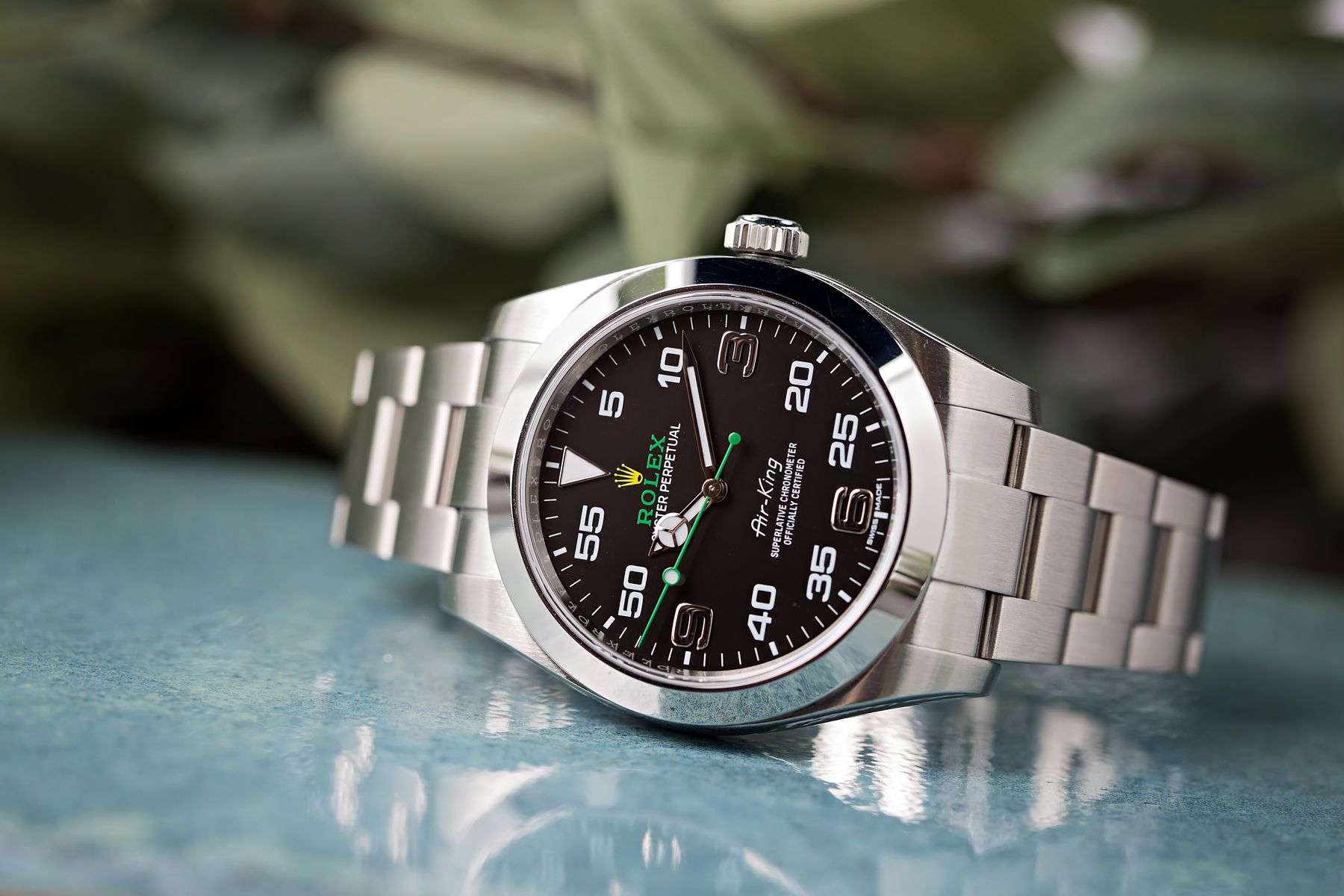 The secondary market shows a different picture, however. As with all current production Rolex sports models, the Air-King sells for a premium in the collector’s market. According to the secondary market, the current market value of a pre-owned Air-King 126900 ranges from $11,500 to $13,500.

Therefore, while the Air-King 126900 is certainly not the cheapest three-hander Rolex in the brand’s current lineup, it is one of the more affordable models on offer. 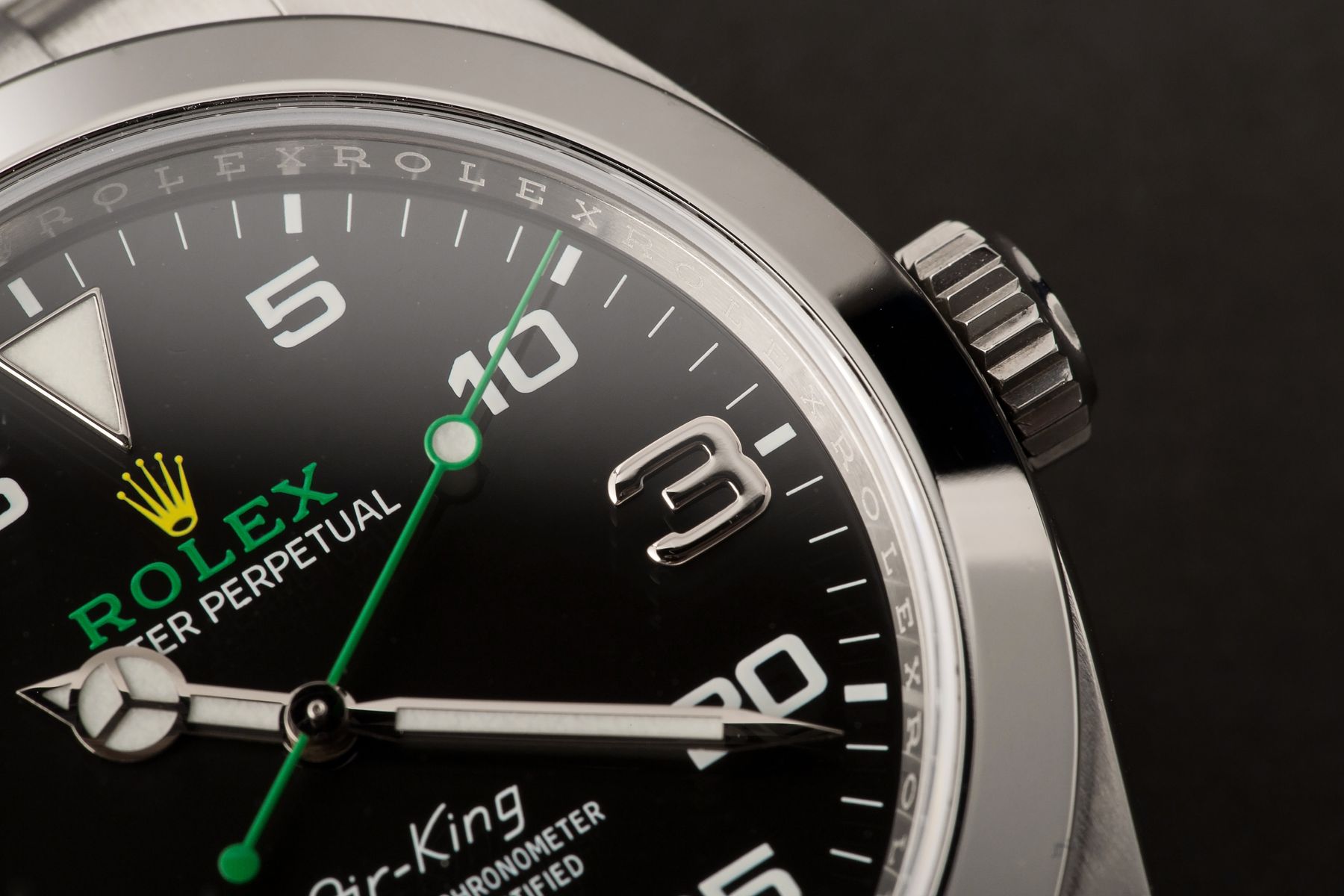 The Appeal of the Modern Rolex Air-King

Some of the adjectives that you’ll often hear to describe modern Rolex Air-King watches are “quirky,” “unique,” “polarizing,” and “off-beat.” That’s because the Air-King is unlike any other Rolex in the catalog. It’s the only one that has a mix of hour and minute indexes. It’s the only one that has a yellow and green Rolex logo. And it’s one of the very few Rolex models that looks vastly different today than it did when it first started – just look at a vintage 34mm Air-King and compare it to the current 40mm Air-King 126900 and you’ll immediately see what we mean.

Now, with the introduction of the new and improved Air-King 126900, Rolex is doubling down on the model’s individuality, as it’s now the only Rolex to have crown guards paired with a smooth unmarked bezel.

Therefore, for some Rolex watch buyers, it’s the nonconformity of the Air-King to the rest of the brand’s lineup that makes it all the more appealing.