The Rolex Explorer II combines a steel case with a 24-hour engraved bezel and a dial with two different hour hands, and it represents one of the brand’s most tool-oriented models. Rolex released the first Explorer II reference in 1971 specifically for the spelunking crowd. It was designed to allow cave explorers to differentiate between day and night while spending extended periods of time in dark caves thanks to an orange arrow-tipped hand that pointed to the fixed 24-hour bezel. However, Rolex updated the Explorer II watch in the mid-1980s to not only include independent hour hands (thereby, transforming the Explorer II from a watch with an AM/PM indicator into a GMT watch) but a white dial option was also added.

Both vintage and contemporary versions of the Explorer II with white dials are often referred to as the Rolex Polar Explorer. While the inaugural Explorer II ref. 1655 was exclusively available with a black dial, all subsequent references (16550, 16570, 216570, and 226570) offer the choice of either a black or white dial. Additionally, the “Polar Explorer” represents one of the relatively few Rolex sports watch collections available with the option of a white dial and due to this unique trait, it has always had a bit of a cult following among collectors.

Although it remained overlooked for many years, the white dial Rolex Explorer II has seen an enormous surge in popularity in recent years and is now just as popular as other iconic Rolex designs such as the Pepsi GMT and black Submariner. Let’s have a look at the history and evolution of these white dial variants in our ultimate guide to the Rolex Explorer II Polar. 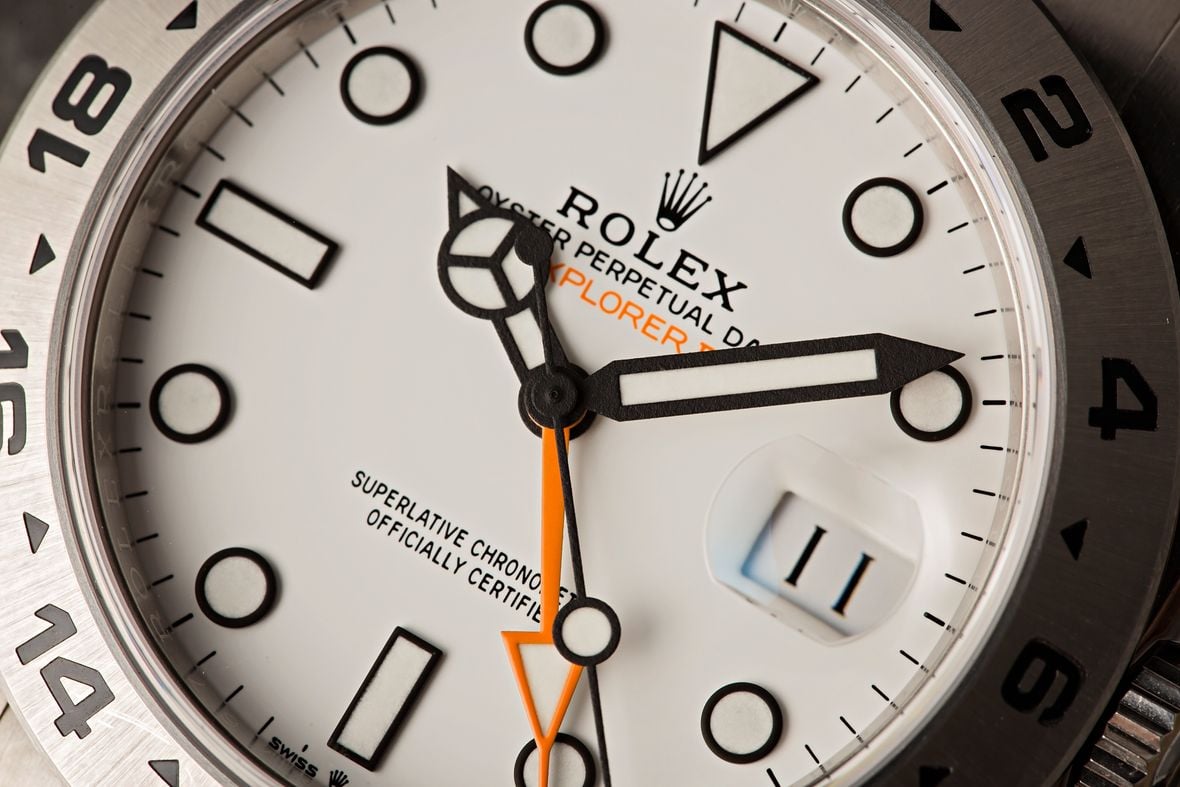 Click here for our ultimate buying guide on the Rolex Explorer II. 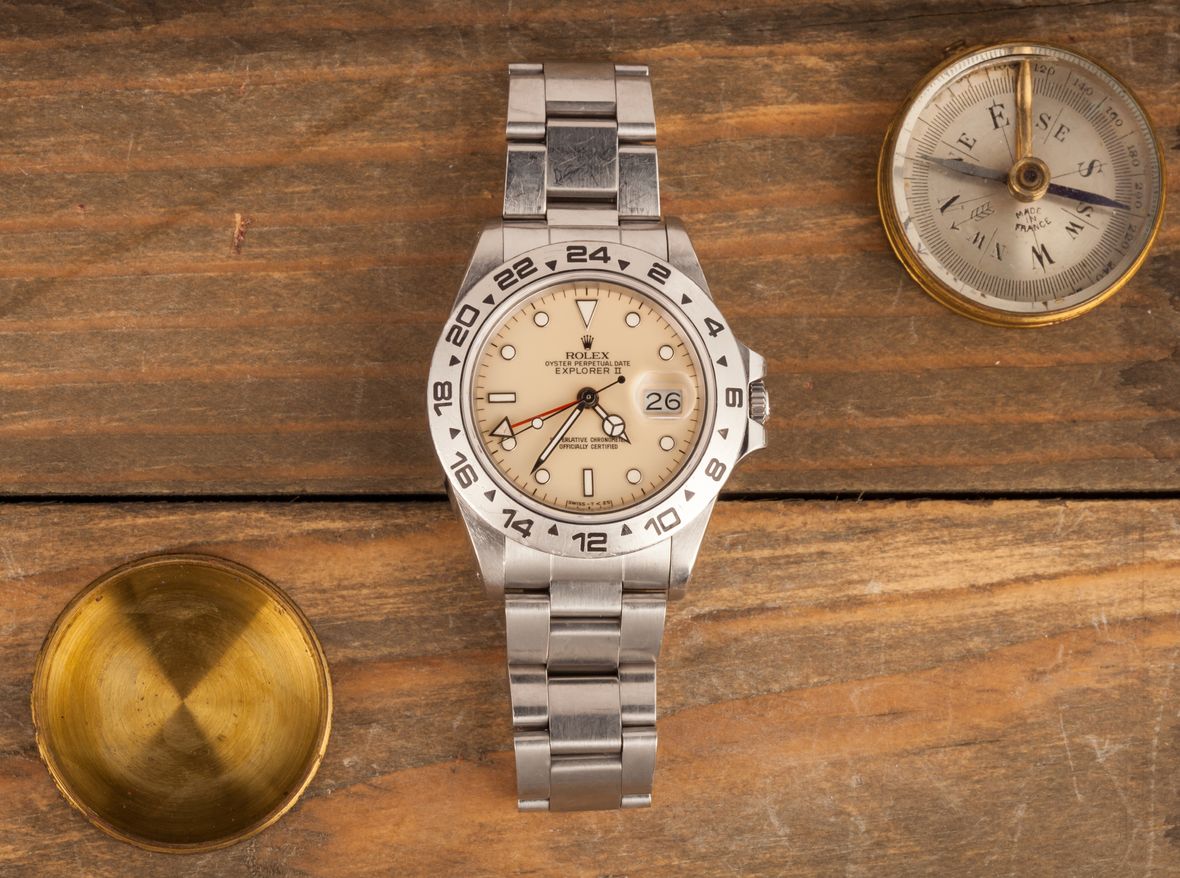 The Rolex Explorer II ref. 16550 was the first to feature a 40mm case, which was notably larger than the 38mm diameter of the previous 1655 reference. It was also the first to have a sapphire crystal instead of an acrylic one. Moreover, this is the reference that introduced the independent 24-hour hand on the dial, thus upgrading the Explorer II from a watch with an AM/PM indicator to one with GMT functionality. Lastly, the Explorer II ref. 16550 was the first to also offer the option of a white dial to sit alongside the black dial version. Therefore, this is when the Polar Explorer II was born.

Aside from its short production run, the Rolex Explorer II ref. 16550 Polar has several other details that would interest vintage Rolex collectors. First, unlike subsequent iterations of the Polar dial that feature black surrounds for the hour markers, the very first Polar Explorer II dials had polished white gold surrounds. Additionally, while the Rolex Explorer II ref. 16550 Polar watches were originally fitted with crisp white dials, they have turned into a creamy ivory shade due to a paint defect (although Rolex eventually fixed the mishap on subsequent references).

To the untrained eye, this color transformation from Polar white to creamy ivory is an obvious flaw; yet, it’s precisely these types of anomalies that seasoned vintage Rolex collectors love to hunt down. Furthermore, the dial of the Explorer II ref. 16550 can also be an example of a collectible “rail” dial since the two “Cs” in “Chronometer” and “Certified” line up perfectly. Finally, some Explorer II ref. 16550 watches also boast the original hard-to-find “fat font” bezel, characterized by thicker numerals on the 24-hour scale. 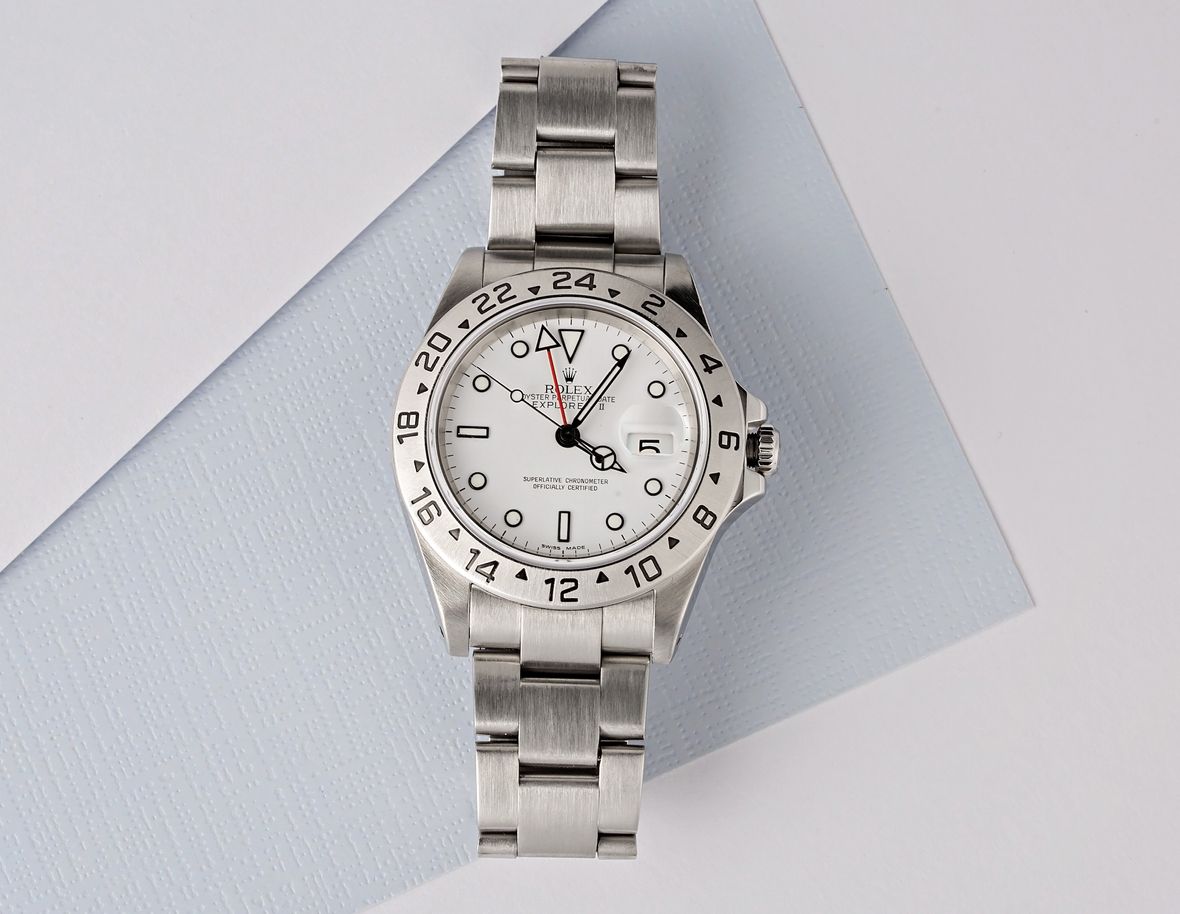 Given that Rolex produced the Explorer II 16570 for over two decades, the reference underwent several updates throughout its history. For instance, early examples ran on the Caliber 3185 while later versions were powered by the Caliber 3186 movement. What’s more, depending on the year of production, you can find an Explorer II 16570 with either tritium (until the mid-1990s), Luminova (from the mid-1990s to the late-1990s), or Super-Luminova (from the late-1990s until the end of production) luminescence on the dial.

It’s also worth mentioning that production of the ref. 16570 overlapped with the transition from holes cases to no-holes cases, so you will find both case styles for the Polar Explorer II 16570. Additionally, Rolex began introducing the “ROLEX ROLEX ROLEX” engraving on the rehaut in the mid-2000s as an anti-counterfeit measure, so you will find this feature on many of the later-era examples. 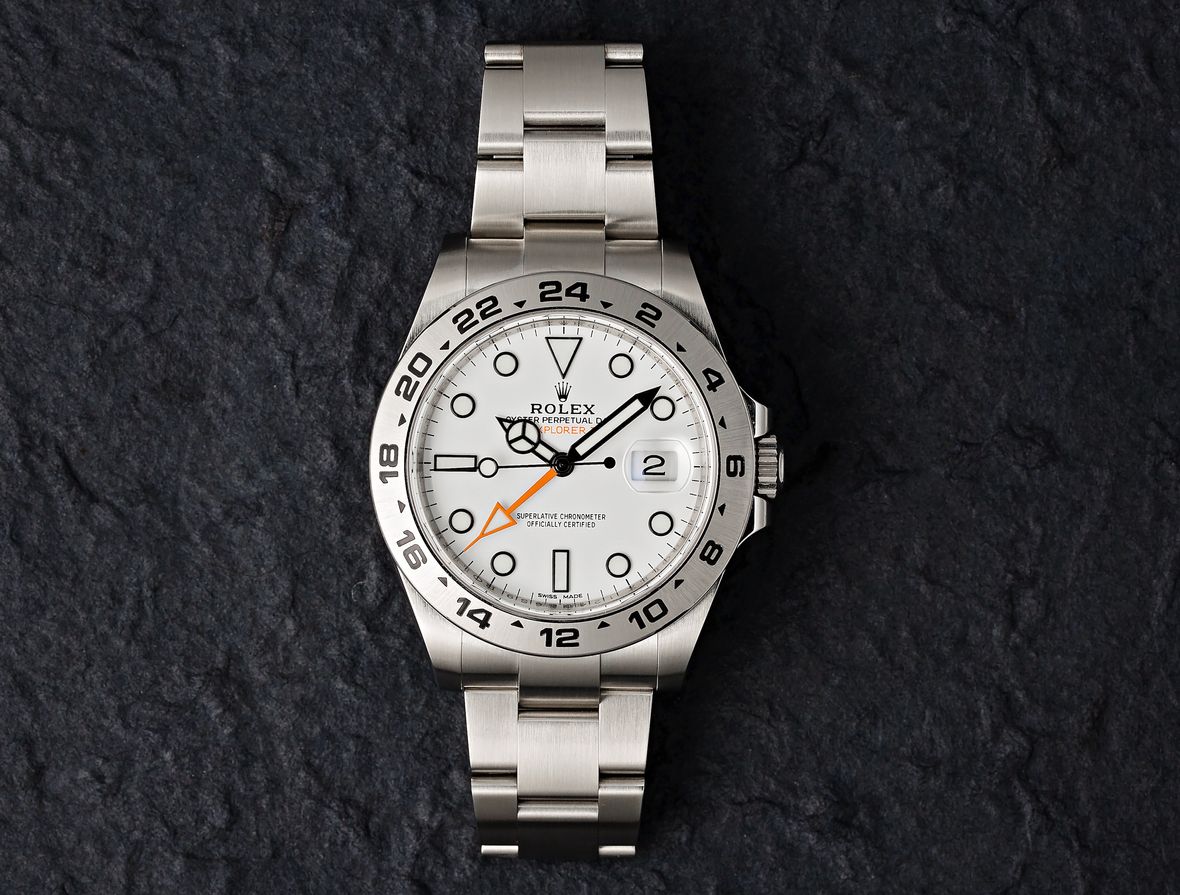 In 2011, Rolex ushered in a new generation of Explorer II watches with the ref. 216570 and with it came quite a few significant changes. The 40mm size was boosted to 42mm and the movement was replaced with the then-new Rolex Caliber 3187, which featured Paraflex shock absorbers.

Furthermore, Rolex replaced the red 24-hour hand of the previous two references with an orange 24-hour hand that was similar to the one used on the very first Explorer II reference. Since the Rolex Explorer II ref. 216570 was launched to mark the 40th anniversary of the model, the revival of the orange hand was a fitting tribute to the original reference from the 1970s.

The Rolex Explorer II ref. 216570 Polar maintained the black surrounds and black hands of the previous model, but this time, Rolex filled the markers and hands with its proprietary long-lasting Chromalight luminous material. Unlike the green glow of Luminova and Super-Luminova, Chromalight emits a blue glow when the lights go down. To match the bigger case size of the ref. 216570, Rolex furnished the watch with a maxi dial, characterized by larger hour markers and hands to fill out the space. 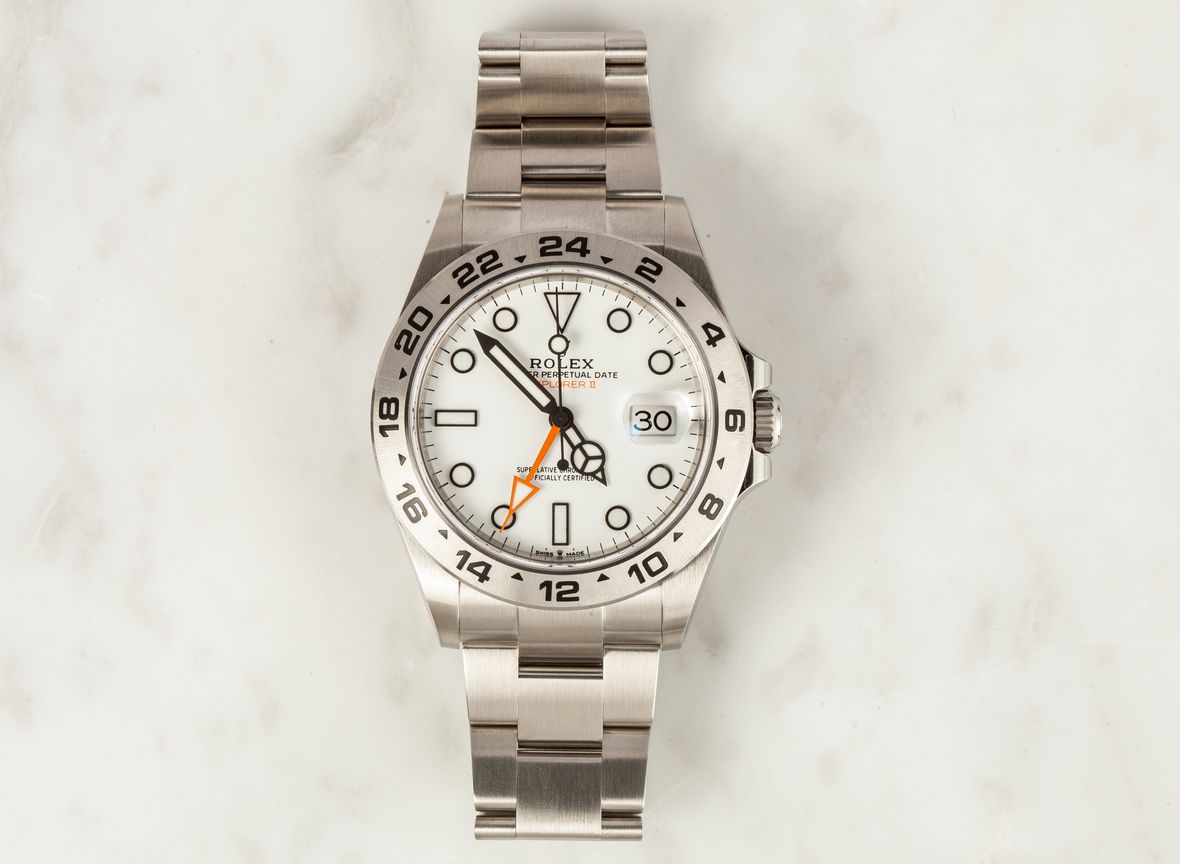 On paper, the Explorer II ref. 226570 retains the same 42mm Oystersteel case size introduced a decade prior. Yet, Rolex did revise the proportions of the new reference slightly by thinning down the lugs and widening the bracelet a touch. The dial also welcomed a small Rolex logo crown wedged in between Swiss and Made under the six o’clock hour marker on the dial – a detail we’re seeing rolled out on all new-generation Rolex references. The white Polar dials of the new Explorer II Ref. 226570 now have matte black outlines and hands instead of glossy black ones, which was done to enhance the contrast with the light background and to reduce reflections. With Rolex, design enhancements are often evolutionary rather than revolutionary, and it’s all about improving the smallest details.

One significant upgrade of the Explorer II Ref. 226570 is its new movement – the Caliber 3285 that debuted in the latest GMT-Master II collection. The movement features the same independently adjustable hour hands from previous iterations but it now supplies the watch with a longer 70-hour power reserve thanks to its optimized Chronergy escapement and blue Parachrom hairspring. Like all modern Rolex movements, the chronometer-rated Caliber 3285 guarantees to be accurate within -2/+2 seconds per day (after casing). 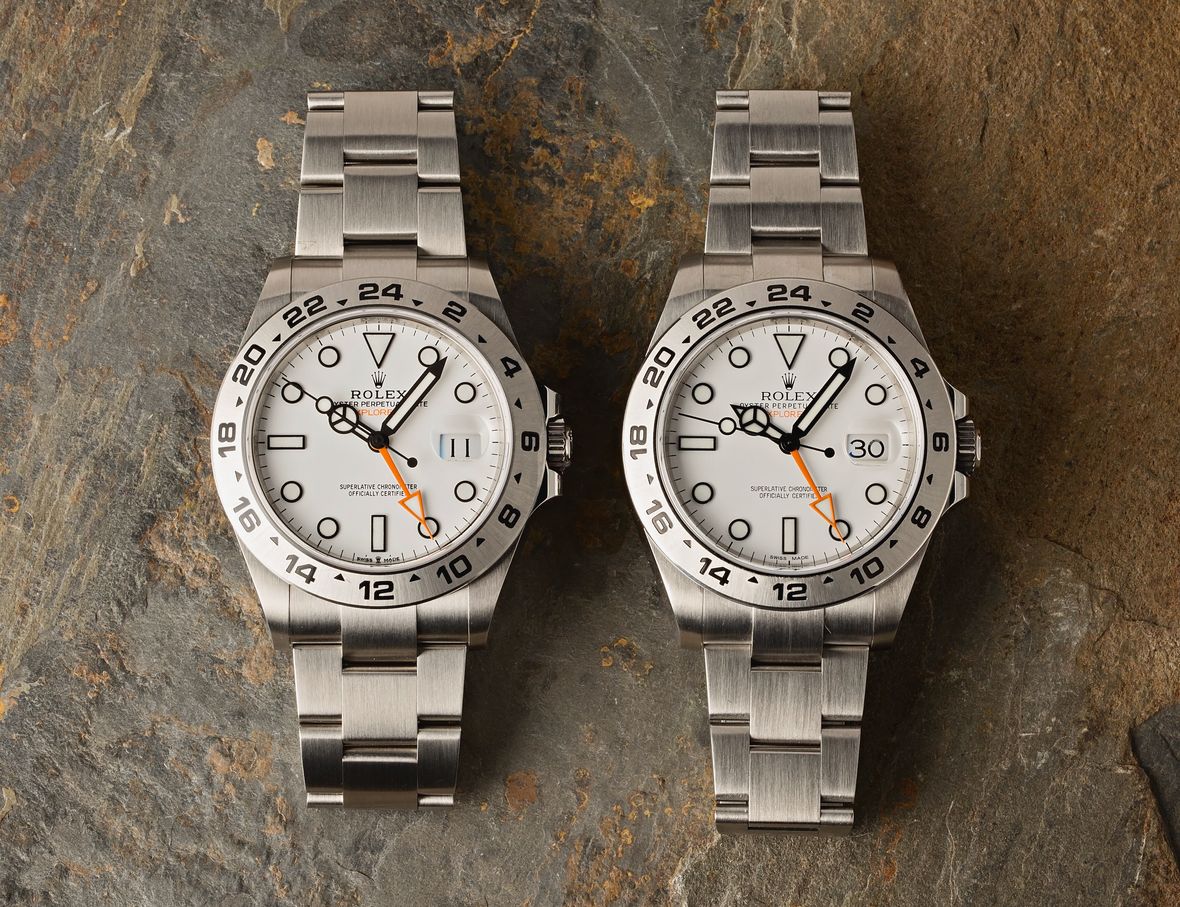 There are a few Rolex watches that can get by with just their nickname – and the Polar Explorer is certainly one of them. If you know what you’re looking for, you can spot this white-hot watch from a mile away. That stark white dial is the defining feature of the Polar Explorer II across all its different reference numbers. The white dial is accented by outlined white luminous hour markers and a date window at three o’clock. There are also those iconic Mercedes hands and the 24-hour hand outlined in either red or orange, all framed by its signature stainless steel 24-hour bezel.

Of course, to every rule there are exceptions. There are a few Polar Explorers floating around out there with a cream dial with white gold hour markers rather than a stark white one with black-finished markers – but that makes them all the more valuable and these cream dial examples are some of the most desirable and expensive Rolex Polar Explorer II watches available.

While there are plenty of black-dial Rolex watches with the famed sports dial configuration, consisting of Mercedes hands, a combination of round/rectangular/triangular hour markers, and a date window at three o’clock, the Rolex Explorer II Polar is one of the very few that features a white dial.

Whether opting for a vintage or modern version of the Explorer II Polar, these Rolex sport watches are simply fantastic. The robust stainless steel case topped with black numerals on the bezel and coupled with a cool white dial punctuated with a bright 24-hour hand form one of the most distinctive watches in Rolex’s lineup. Highly practical and impeccably designed, the Explorer II Polar is a Rolex watch not to be missed. 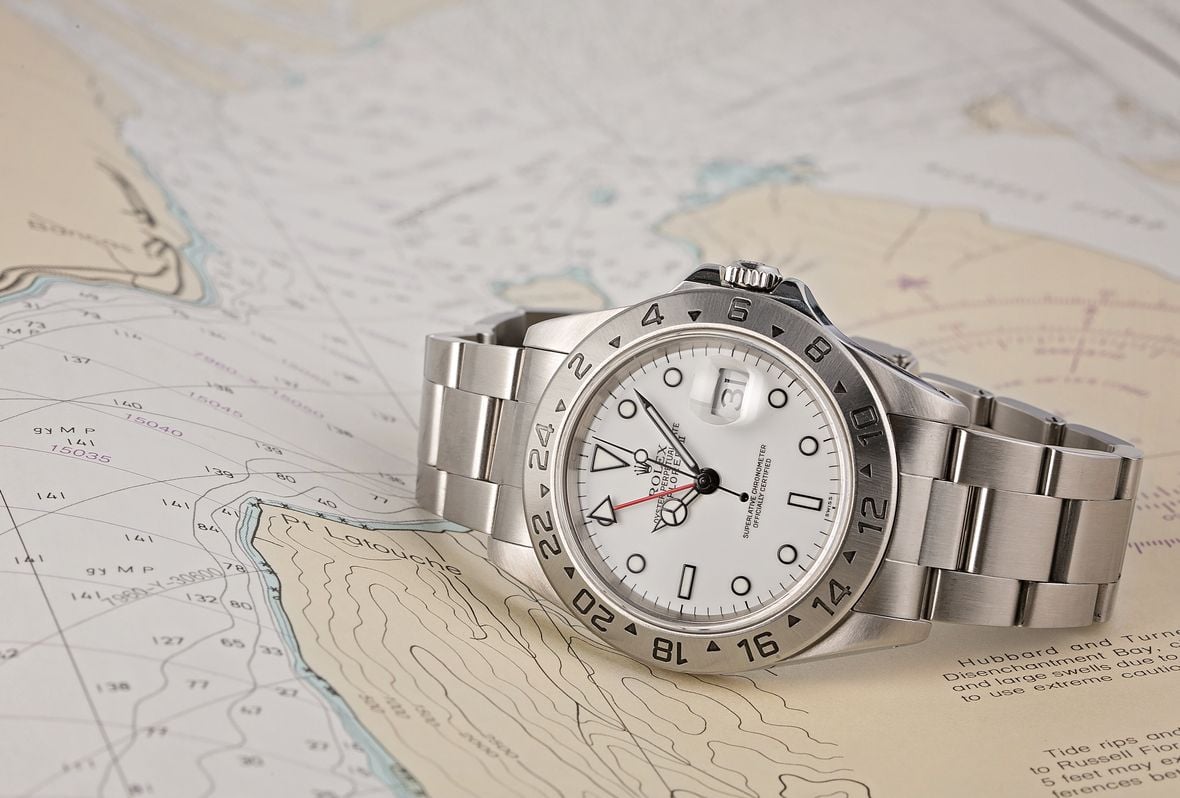