During my time with Bremont, I developed many fleeting attachments for their various luxury watches. One that endured was my love for the Bremont Supermarine 2000, or as we more commonly referred to it, the S2000. The bigger, bulkier, brasher brother of the popular and ubiquitous S500 range, the S2000 was a rarely seen beast in the wild. 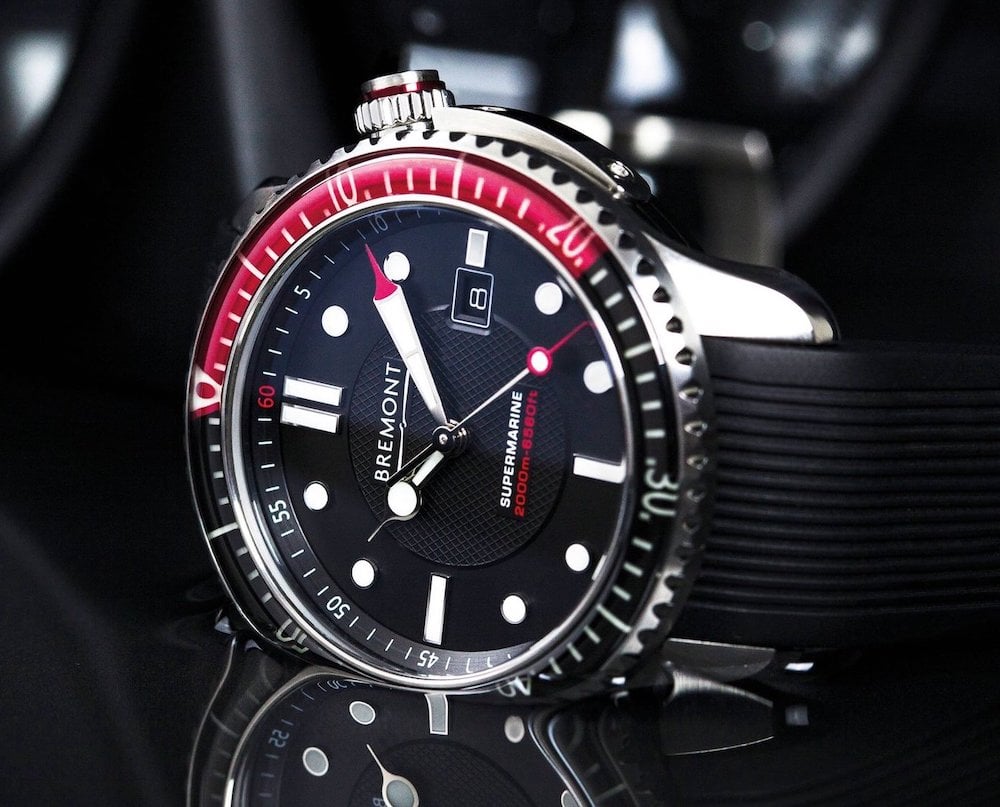 The Bremont Supermarine 2000 is the larger and more capable version of the S500 series. (Image: Bremont)

My love for the Bremont S2000 couldn’t have been any less to do with its proportions. Its gargantuan 45mm casing wore even larger than you’d think thanks to a tall, Trip-Tick case design that causes the watch to stand to attention on the wrist. If you are wearing one of these behemoths, you definitely know about it. 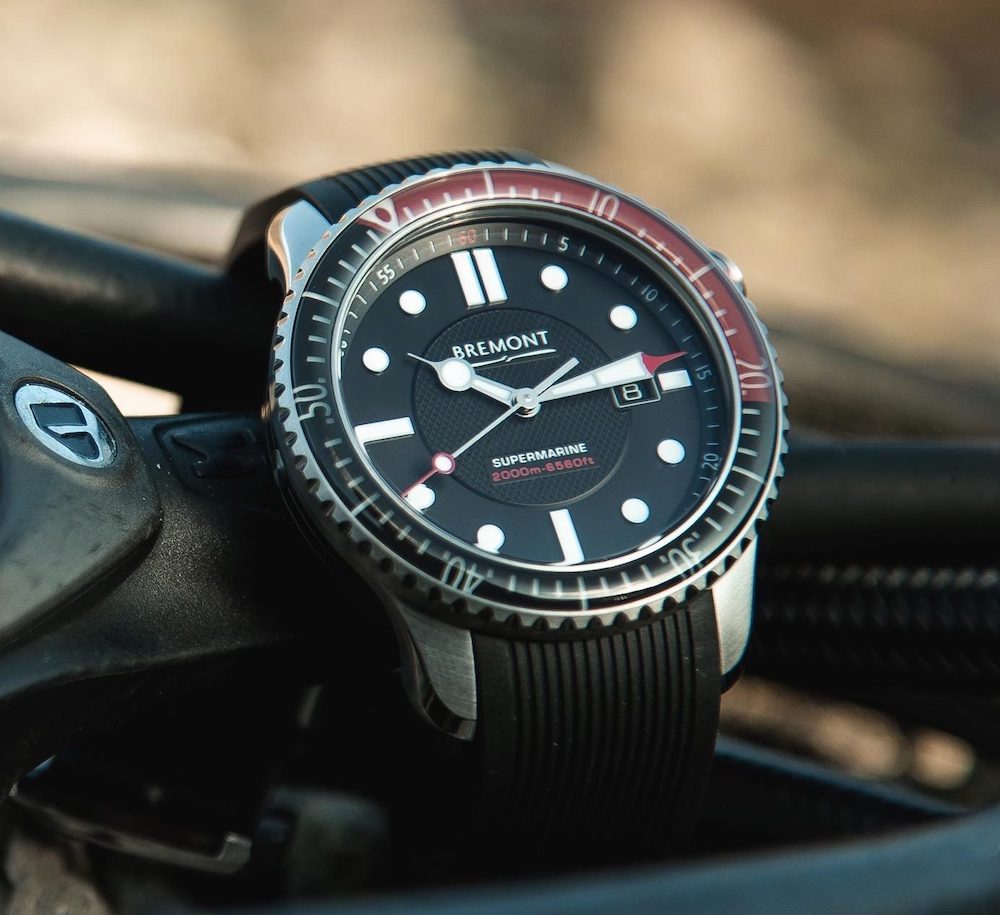 It’s uprightness was an appropriately military posture for such an unabashed tool watch. For a day-to-day beater, perhaps it is a little on the large side, but the design of the S500 translates so well with the dimensions of the S2000 that it’s hard to bear it a grudge. 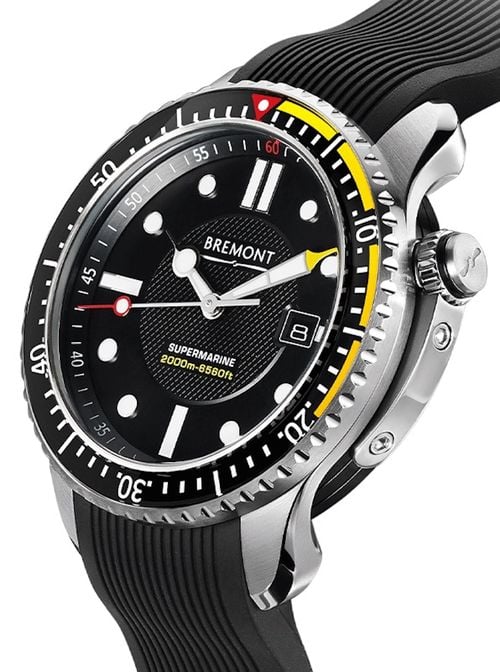 One of the things I liked most about the Bremont Supermarine S2000 was the way that its enormous case size provided a much more affordable alternative to two of my other favorite dive classics. Both the Omega Ploprof and the Rolex Sea-Dweller command a similar amount of wrist real estate, but they are roughly two and three times the price respectively. 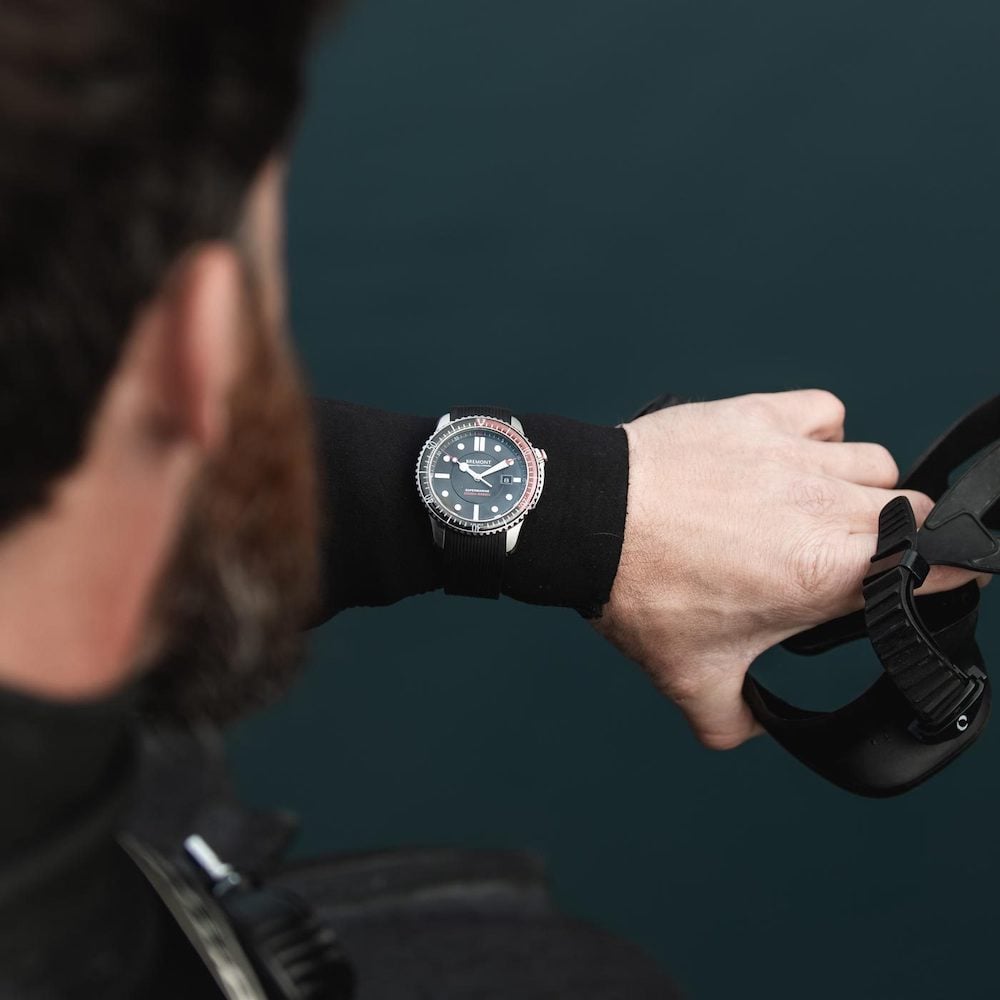 For those who enjoy large dive watches, the Bremont Supermarine 2000 is a fantastic option, costing significantly less than comparable options from Omega and Rolex. (Image: Bremont)

It’s so rare for a Bremont to be pitched as a value proposition, but here we are. The S500 is a member of a very crowded and hugely competitive market. The S2000? Less so. Genuinely massive dive watches are often the preserve of the super rich. Not so much because of the premium price tag, but rather because they are generally quite impractical to wear if you actually have any real work to do. 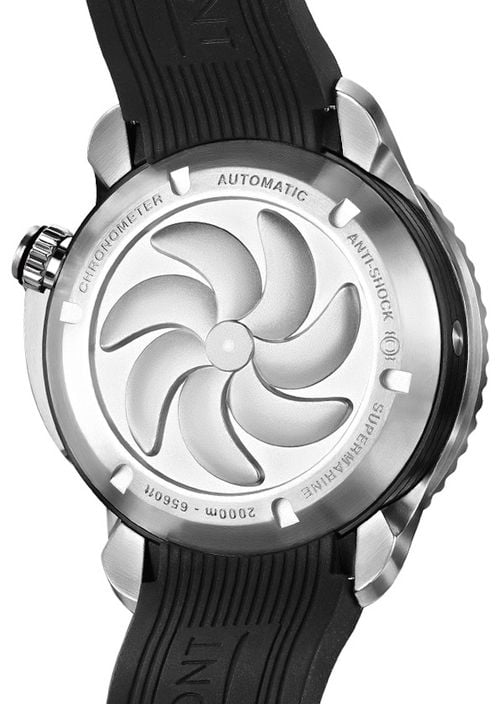 The case design of the Bremont Supermarine 2000 offers a significant degree of protection from impacts ans magnetic fields. (Image: Bremont)

The technical credentials of the S2000 are solid if unremarkable; however they are about what you would expect for the $5-7,000 range. The movement measures 11 and a half ligne (26mm) and has been chronometer certified by COSC in accordance with ISO 3159. Caliber BE-36AE has 25 jewels, a glucydur balance, an Anachron balance spring, a Nivaflex 1 mainspring, a 38-hour power reserve, and a standard operating speed of 28,000vph (4Hz). The Bremont decorated rotor is hidden behind a decorated case back showing a large, multi-fn propeller. 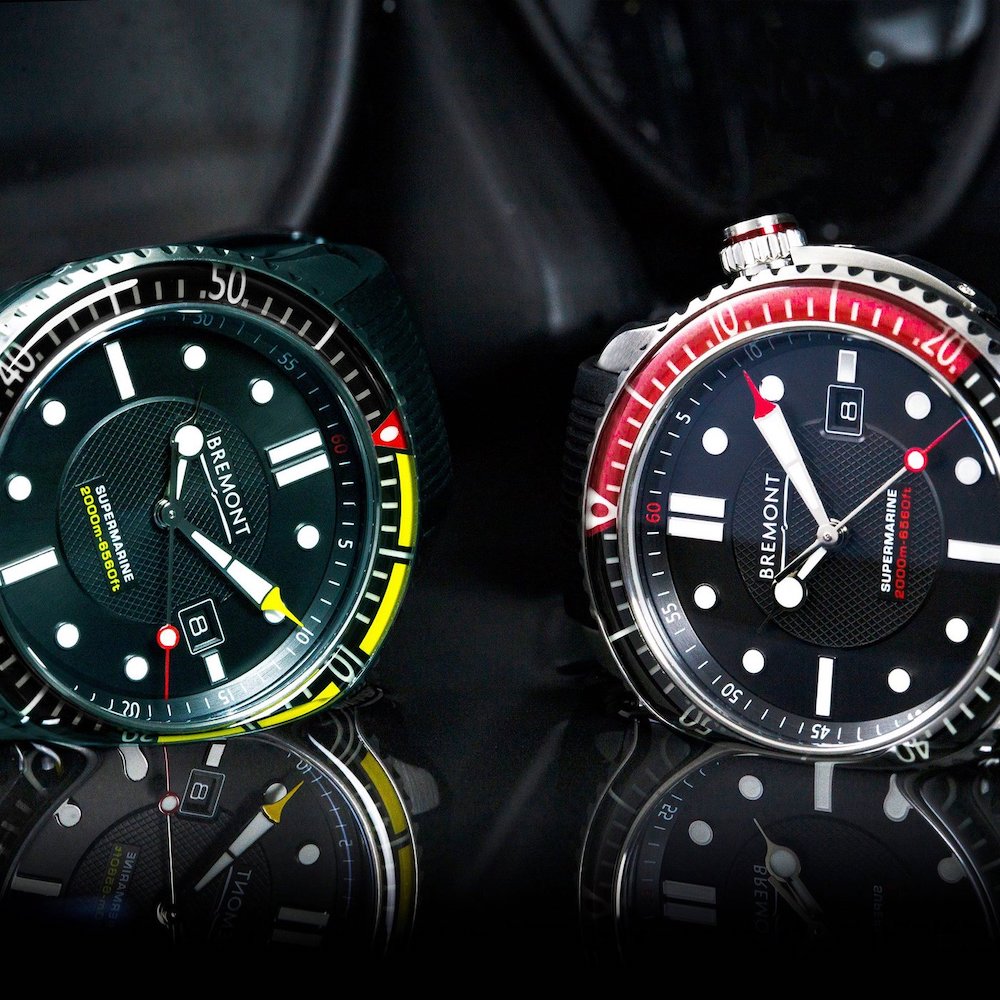 The Bremont Supermarine 2000 is available with either red or yellow accents. (Image: Bremont)

The Trick-Tick case is classic Bremont. Made from stainless steel, and boasting a scratch resistant DLC treated middle case, these housings are more than capable of standing up to serious battering. The movement itself is protected from electromagnetic fields by the thick, threaded case back, and an internal faraday cage made of soft iron. This cage surrounds the movement on all sides and has a ‘lid’ that sits between the rotor and the inside of the case back. In addition to this, the movement is protected from shocks thanks to a rubberized mount in which the faraday cage sits. On the dial side, the watch housing is completed by an anti-reflective sapphire crystal, which is similarly up to the task of withstanding a regular beating. 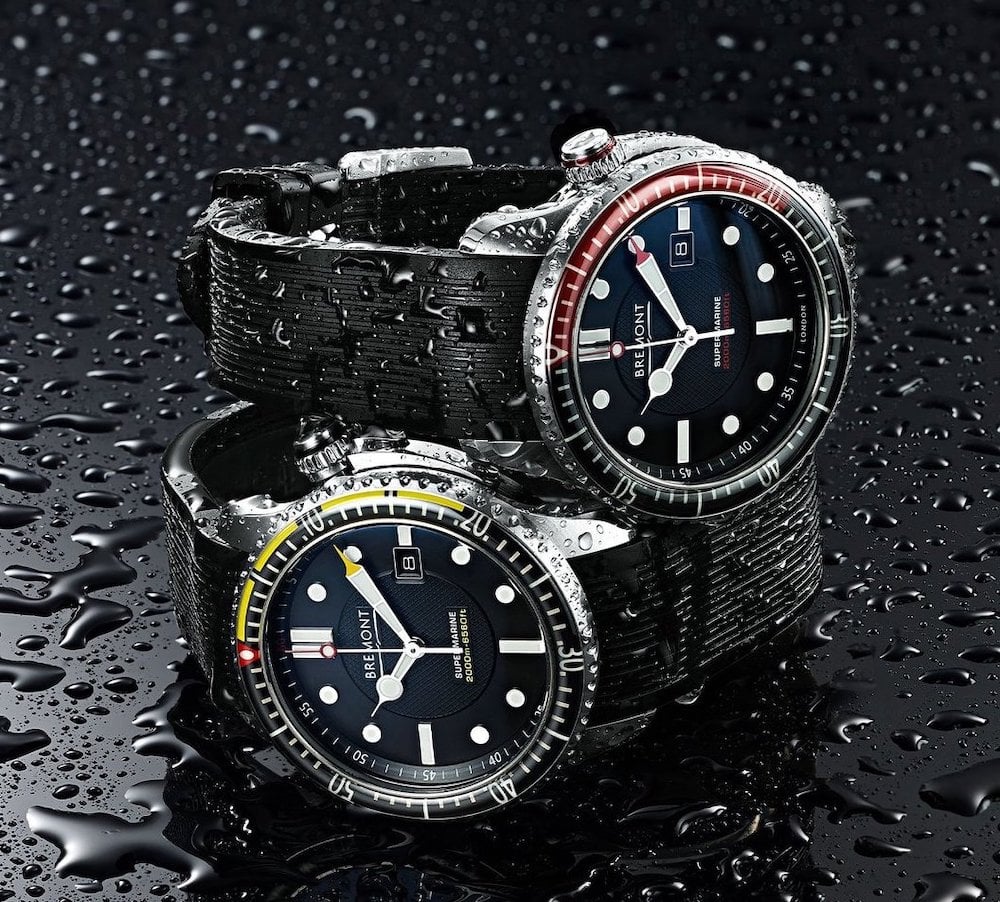 The dial is black on both the yellow and red version of the Bremont Supermarine 2000. (Image: Bremont)

The black dial that is featured in both the yellow and red models is, in my opinion, an improvement on the original S2000 dial in terms of legibility. The central ‘knurled’ pattern is less distracting to my eye than the thick pinstripes that adorned the older model and the early S500 pieces. The time can be read at night thanks to X1 Grade Super-LumiNova, which has been applied to the indices and the hands. 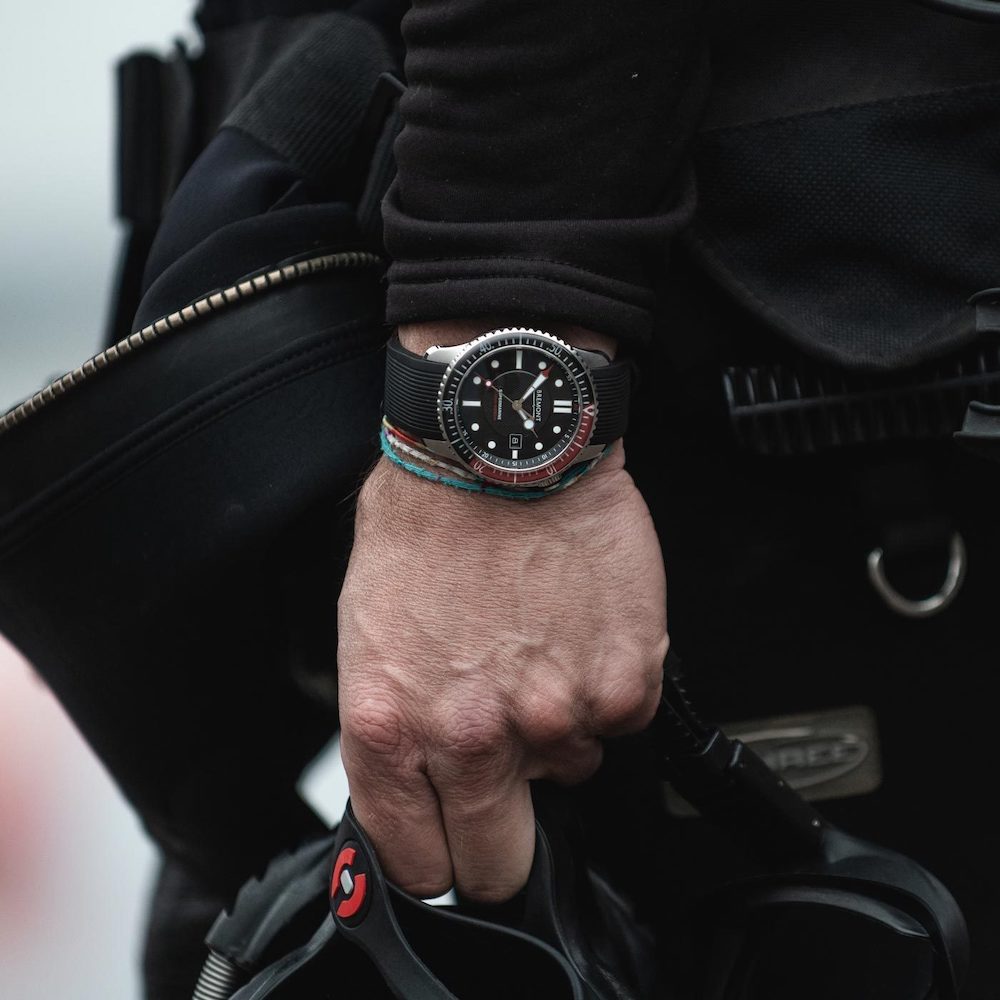 With a water resistance of 2000m the Bremont Supermarine 2000 is a highly capable dive watch. (Image: Bremont)

With a water resistance of 2000m the Bremont Supermarine 2000 is most certainly a suitable watch for a commercial diver or serious hobbyist. The new color options – a serious red and fun yellow – are massive upgrades on the original Supermarine’s austere colorway. Dive watches should have a dash of vitality given the active nature of the environment for which they’ve been designed. The 22mm lug width means these watches are versatile in the strap department, and the standard rubber strap (of which I am a fan) could easily be subbed out for something more suitably for your diving kit if you have a particular preference for a different style or material (a distressed leather 5-ring ZULU would look pretty nice on either model, for example).

One thing I very much like about the new model that was absent on the original, is the domed – or bubble – sapphire bezel insert. The original was on a much gentler incline from the bezel edge to meet the slight dome of the sapphire. This nod to classic dive watches like the Blancpain Fifty Fathoms gives the new Bremont Supermarine S2000 a touch of vintage class that I’d happily wear on a daily basis.