The Most Iconic Military Watches of All Time

The history of the wristwatch is inextricably linked with the military. Before the conflicts of the early 20th century, wearing any sort of timepiece on the wrist was for aristocratic ladies only—men wore pocket watches.

It was not really until the First World War that the utility of a watch that didn’t need two hands to operate was able to prove itself, and the image of tough, battle-hardened soldiers sporting wristwatches changed the public’s perception of them forever.

Now, all of a sudden, they were tools designed to do a job in the harshest conditions imaginable, rather than mere pieces of jewelry.

Manufacturers started to design their models to the requirements of various armed forces around the world, and many of these pieces went on to become legends in the civilian field.

These vintage watches have had explosive growth in value and collectibility in the recent years and continued growth is expected.

Below we will take a look at three of the most iconic of these watches, offerings from some of the biggest names in the industry with deep military roots. 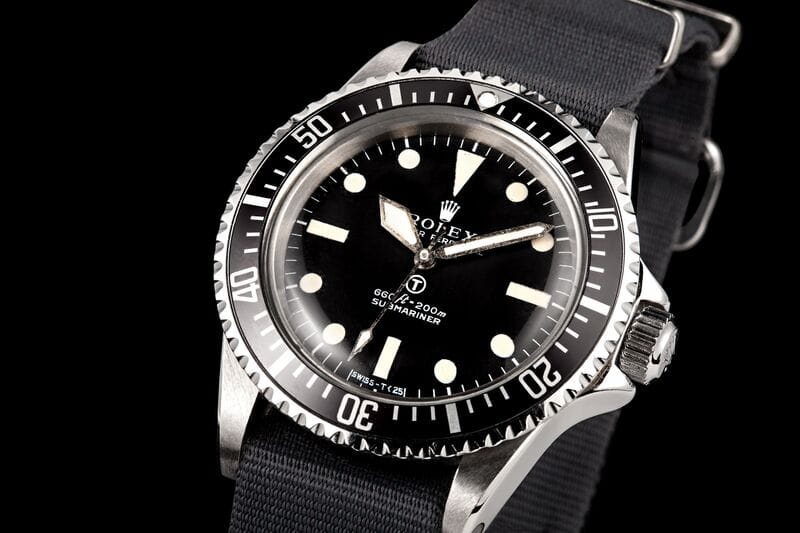 The Rolex Military Submariner 5513 is possibly one of the most well known military watches.

The most famous dive watch of all time was the obvious choice for the British Royal Navy in the 1950s as they hunted for their government-issue timepiece.

Mechanically simple, hard-as-nails and unfailingly accurate, it was everything a military watch should be.

Over 20 years or so, Rolex provided a total of four different references to the U.K. armed forces; only lightly altered versions of the standard models that would become known as the MilSubs.

Starting in 1954, the brand furnished the Navy with around 50 off-the-shelf examples of the Big Crown ref. 6538, or the Bond Sub, for field testing. A couple of years later, the results came back with only two suggestions for improvements; firstly, a redesign of the bezel to make it easier for crews to manipulate while wearing gloves. And secondly, a solution to the potential weakness of the spring bars holding the bracelet.

Rolex enlarged the diameter of the bezel so that it overhung the case, and gave it the serrated edge we are familiar with today. And they soldered a solid bar to the watch’s lugs to hold the NATO cloth strap.

Rechristened the A/6538, it is estimated that today only about 12 still exist. They were joined a few years later by the ref. 5512, which brought the extra security of crown guards.

These watches served well until 1967, when the MoD opted for Omega’s reworked Seamaster 300 instead. But the limitations of the Naiad crown at shallow depths soon brought them back to Rolex.

As well as the initial design tweaks, these models also had bezels with hash marks that continued round for the full 60 minutes, rather than just the first 15. On most, the Mercedes handset was swapped out for large gladiator hands. And each was given a small letter T in a circle above the six o’clock index to denote the harmful radium lume had been stripped and replaced with the much safer tritium.

Today, these Rolex MilSubs, with ref. 5513, ref. 5517 and the double reference 5513/5517, represent perhaps the “grailiest” of grail watches among both Rolex collectors and devotees of military watches in general.

Prices for genuine articles are astronomical and, as with all highly valuable vintage Rolex, counterfeits abound.

If you find yourself in the market for one, no amount of research is too much before you pull the trigger. 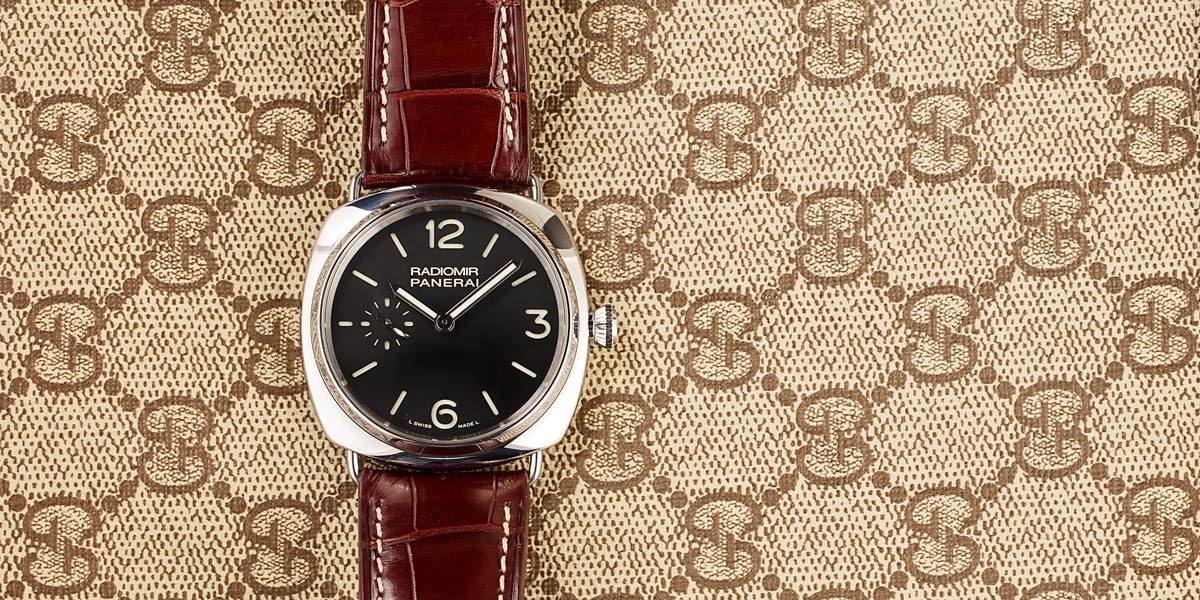 The Panerai Radiomir is one of the most iconic watches of all time with military origins.

A history that goes back even further than the Sub, the Radiomir from Panerai is sometimes held up as the first true dive watch.

Developed out of necessity in the mid-30s, with WWII on the horizon, the brand was called on to develop a waterproof watch for the Italian Navy’s new breed of warrior; the underwater demolition specialist.

Panerai collaborated with Rolex, whose innovation of the Oyster case had completely changed the direction of the wristwatch, to supply the Regia Marina’s ‘frogmen’, and the Swiss giant supplied fully cased-up pocket watches which were then refined to military requirements.

Like the MilSubs, the Radiomir was fitted with soldered lugs to hold their waxed leather straps, and were also given bigger bezels, a revolutionary shatterproof Plexiglass crystal, and the handset and indexes were filled with Panerai’s proprietary luminescent material, made up of zinc sulphide, radium bromide and mesothorium—called, funnily enough, Radiomir.

These models, numbered reference 3646, served the Italians throughout the war, and were also adopted by the German naval forces, with the Nazis renaming them the Kampfschwimmer.

Panerai and Rolex continued to work together producing watches for the military until 1956, when the two went their separate ways. Panerai was still making models for the Italian Navy until as recently as 1993, went it broke off their association to concentrate on commercial watchmaking.

After a slow start, they have become a highly sought-after marque, and the Radiomir remains a key model in the lineup. Even though it has always been missing the one characteristic element that has made Panerai the darling of the horology set, the oversized crown guard, many fans (nicknamed the Paneristi) love it for its more understated build and its crucial position in the brand’s history.

Today, the PAM 721 exists as a virtual reissue of that original ref. 3646. The case is an identical, and huge, 47mm. The period-correct sandwich dial is logo-free with minimal markings, and it is all finished off with blued steel hands and faux aged lume.

It might not have the immediate recognizability of the Luminor, but the Radiomir is still a universally adored icon in military watch circles; the wartime bred legend that started it all. 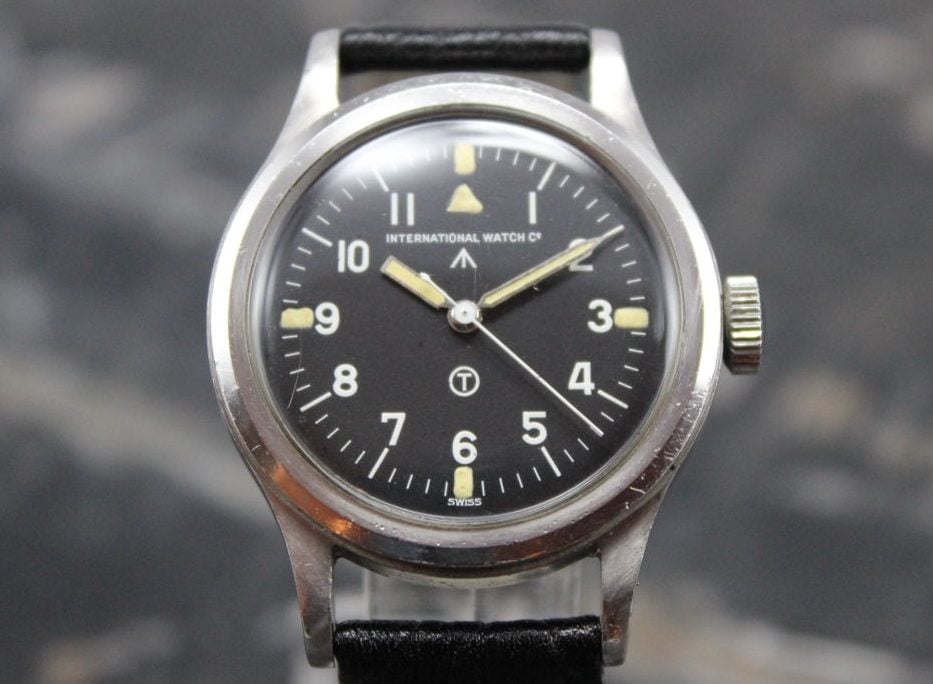 The IWC Mark XI goes along with the other dirty dozen military watches. (Credit: watcholdtimes.de)

Considered in some circles as the finest military watch ever made, the IWC Mark XI entered service in 1949, a follow-on from a model which made up one of the so-called ‘Dirty Dozen’.

At the start of the 40s, the British MoD awarded contracts to 12 different watchmakers to come up with a new model to be used by aviators, built to their latest and exacting specifications.

Although the dozen pieces that manufactures such as Omega, Longines, JLC and IWC themselves returned with were approved for use by the air force, they all eventually proved too inaccurate to be of use for precise time and distance calculations.

So another, more taxing set of provisions was drawn up, demanding, amongst other things, a high quality Swiss movement with a 36-hour reserve and a mean variation rate of no more than -4/+4 seconds a day. On top of that, it should have a hacking function to help synchronization, a Nivarox hairspring, a Glucydur balance wheel and a Faraday cage to guard against magnetic interference.

This fresh list of requirements was similarly farmed out to various watchmakers around the world, with only Jaeger-LeCoultre and IWC eventually winning the commission.

The resulting watches became the Mark XIs, and were put into action with the British RAF, alongside military forces in Australia, New Zealand and others.

Incredibly, while ostensibly the same watch, the JLC version was retired in 1953, but the Mark XI from IWC wasn’t officially decommissioned until 1981. There were also around 1,000 made for commercial sale between 1973 and 1984.

What separated the two was IWC’s willingness to include Incabloc shock protection to their movement, the Caliber 89—already perhaps the most sturdy three-hand engine ever built. Beating at 18,000vph and fitted with a Breguet hairspring, it has gone on to become a legend of mechanical movements.

Again like the MilSub, the MoD sent the Mark XIs away to their subcontractor Burford, makers of aircraft instruments, around 1962 to have the original harmful radium removed and replaced with tritium. The small letter T above the 6 o’clock denoted the change in these later models.

Starting in 1993, International Watch Company has released a series of new ‘Mark’ watches as an homage to the XI.

Currently up to Mark XVIII (numbers XIII and XIV were skipped due to superstition) the series was joined last year by a special edition, nostalgia-heavy Mark XVIII ‘Tribute to Mark XI’, which reintroduced some vintage touches missing from previous attempts.

So, the dimensions remain at a very wearable 40mm, while the handset is lifted straight off the original, with a squared-off hour and stick-style minute hand. The numerals have borrowed a similar font to the XI, and the number 9 is included again, having been replaced with a baton on former pieces.

The Luminova is a soft cream color to give the watch an attractive aged appearance and it is supplied on an olive drab NATO strap to drive home the soldierly feel of the whole thing.

In all, it is a wonderful accolade to possibly the most iconic military watch of them all.