Swiss watchmaker, TAG Heuer has a long tradition of teaming up with influential cohorts, and their latest collaboration brings them into partnership with avant-garde Japanese streetwear guru, Hiroshi Fujiwara, founder of fashion label Fragment. The 54-year old, former DJ and now musician, producer, and designer is an unabashed vintage watch geek, a passion he’s indulged in for more than three decades.

Together, he and TAG have created the Carrera Fragment, or to give it its official and much less easy on the ear title: the TAG Heuer Carrera Heuer 02 Fragment Limited Edition by Hiroshi Fujiwara (no that’s not a typo, they have actually managed to get ‘Heuer’ into the name twice).

But while the ‘Godfather of Harajuku’ may be best known for his experimental, dernier cri style, the model that has emerged is a discreetly embellished recreation of the original ref. 2447NT from 1963 – a fitting celebration for the Carrera’s 55th birthday.

As a model to resurrect, the 2447NT is among the most iconic vintage pieces of them all. Launched the same year as a certain Daytona, the two watches actually shared several elements, such as their Singer-made dials and Valjoux-based movements. They likewise have the exact same baton-style hour indexes and tri-compax layout for the sub-dials. However, while the Rolex model famously engraved its bezel with a tachymeter scale, the Heuer omitted the surround altogether in favor of a cleaner, dressier look.

It might not be as universally recognized, but the Carrera 2447NT is a hugely important chapter in the history of both TAG Heuer and sports watches in general. Wisely, with all that legacy to work with, Fujiwara has restricted his input to a handful of flourishes, designed to enhance the retro appeal of his subject, rather than overpower it completely.

Put side by side with the original, perhaps the most obvious difference with the Carrera Fragment is the increase in size – from 36mm to a more 21st century friendly, 39mm case diameter. Beyond that, everything is pleasingly familiar, from the beautifully sculpted and faceted lugs, to the large unguarded crown flanked by two simple pushers, all set into an elegantly-curved stainless steel case. 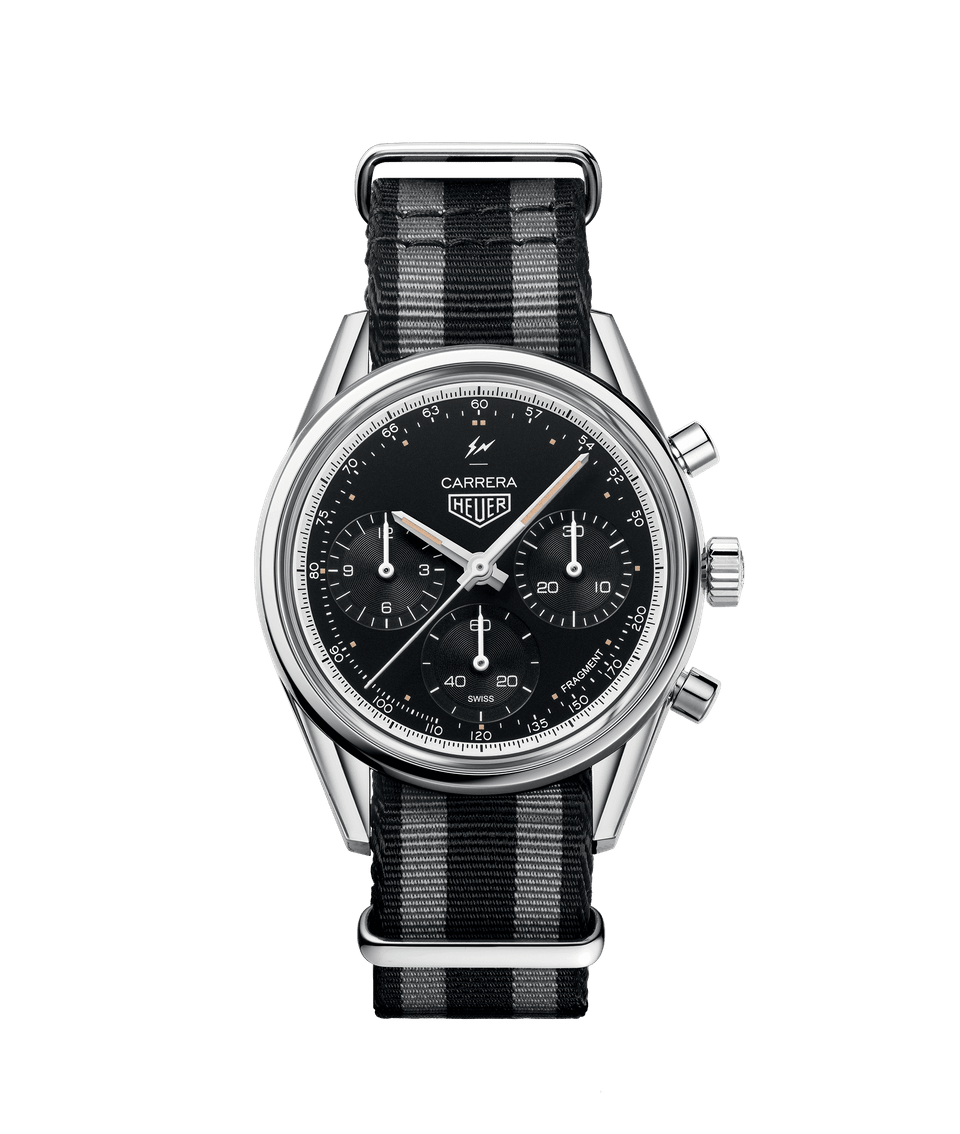 Protecting the black opaline dial is a nostalgia-infused ‘glass-box’ domed sapphire crystal, with anti-reflective treatment on both sides. The rhodium-plated hour and minute hands are filled with faux-aged, beige Super LumiNova, as are the tiny square hour markers. In fact, the only way you can tell that this is actually a watch made in partnership with one of the most successful influencers in the business is a pair of very unobtrusive insignia – the ‘Fragment’ name printed in small letters between the 4 and 5 o’clock markers, and the brand’s logo (which some unkind observers have likened to two lightning bolts humping), placed right below the 12 o’clock.

The minimal adornment is a clear indication of the esteem in which Fujiwara holds the inaugural Carrera, and follows on from a different reinterpretation earlier this year, when the designer provided his input in another timepiece collaboration with Bamford to release a limited edition of the Zenith El Primero. 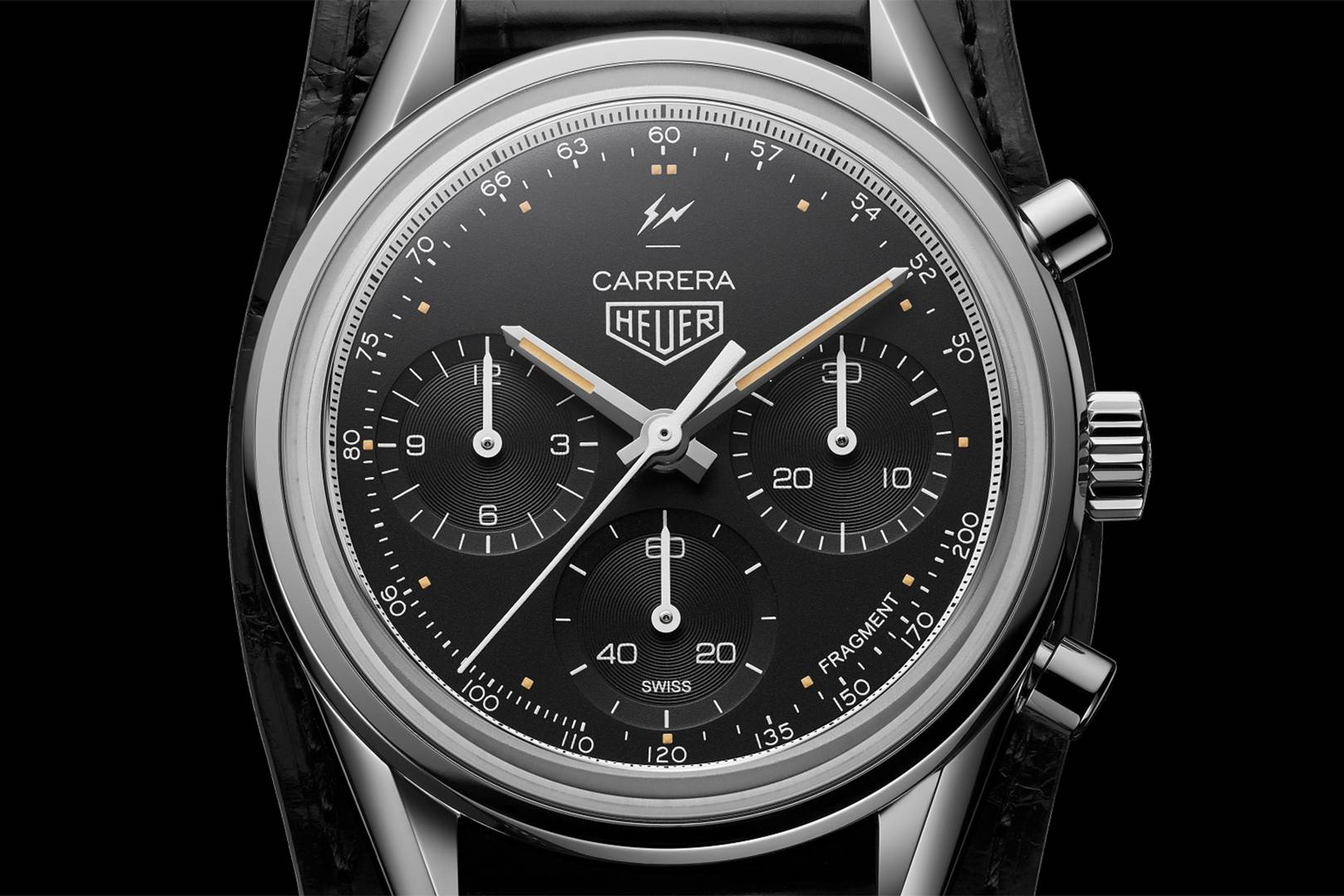 As befits one of the TAG Heuer flagship range, the Fragment Carrera is powered by the brand’s in-house manufactured, Caliber Heuer 02 movement. Based on their first homegrown engine, the CH80 (otherwise known as the Caliber 1969), the Heuer 02 is a 33 jewel, 28,800vph, column-wheel operated chrono with a vertical clutch. It is a movement that has been widely praised since it was introduced just a couple of years ago, and a more complicated version stole the show at Baselworld 2016 inside the Carrera Heuer-02T which, at around $15,000, became the most affordable Swiss-made tourbillon chronograph ever made.

In this latest release, a display caseback lets the wearer watch the mechanism at work. One difference you might notice from the versions used in other TAG Heuer watches is that the column wheel is painted a plain black, rather than red. On the reverse, here again, branding is kept to a minimum, with a restrained Heuer logo on one of the plates and the name of the caliber written in yellow script on the rotor. Fragment’s twin lightning bolts are featured in the middle of the sapphire crystal back, with the brand’s name on the outer edge, mirroring its position on the dial.

Additionally, the Caliber Heuer 02 has a power reserve of approximately 80-hours, which means that you can give the watch the weekend off and be reasonably confident that it will still be ticking away come Monday morning. 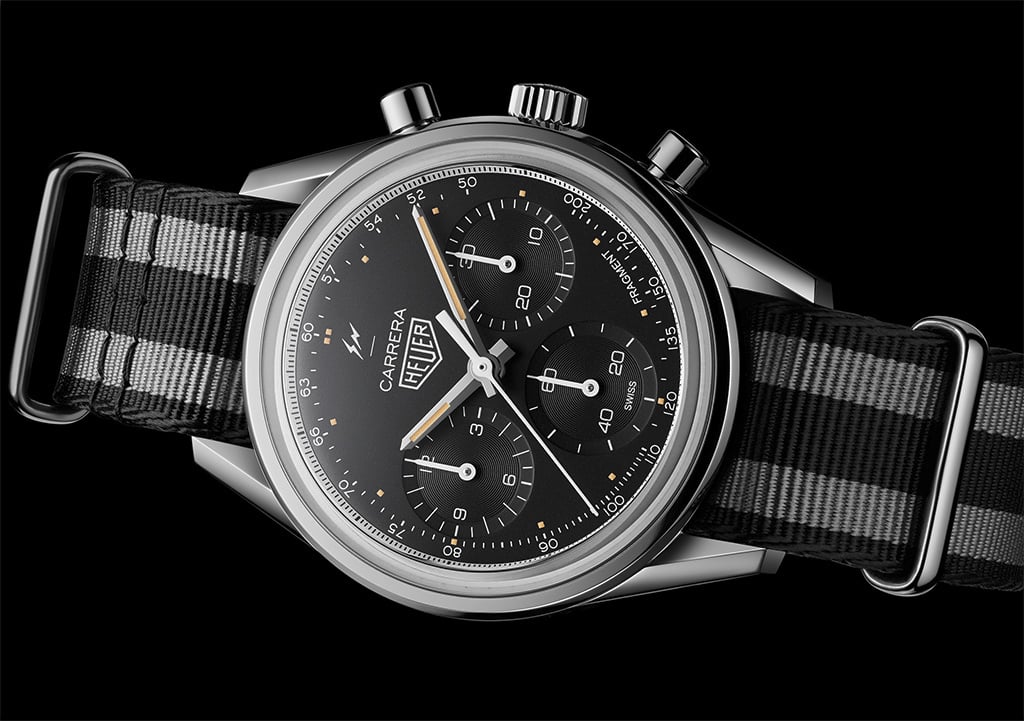 Despite being a limited-edition collaboration piece, the overall aesthetic of the Carrera Fragment is heavily based on the original model from 1963 (Image: TAG Heuer).

Hiroshi Fujiwara is no stranger to lending his formidable talents to other entities, whether in fashion or some other arena. In his time, he has joined forces with Nike, Stussy, Converse, and Beats by Dre (among many others), as well as designed guitars for the likes of the legendary Eric Clapton.

With a thorough understanding of just what it is that makes vintage watches so alluring, Fujiwara is the perfect partner for a limited-edition Carrera, and TAG Heuer would have struggled to find anyone better suited for their latest venture. The artist’s love of horology shines through in this faithful reproduction of an all-time classic, even down to the choice of included strap. The (deep breath) TAG Heuer Carrera Heuer 02 Fragment Limited Edition by Hiroshi Fujiwara comes with both a black and grey NATO strap and a Newman-esque, ‘Bund-style’ leather cuff.

Sold exclusively through Heuer boutiques and limited to a production run of just 500 pieces, the price of the Carrera Fragment comes in at a touch over $8,000. 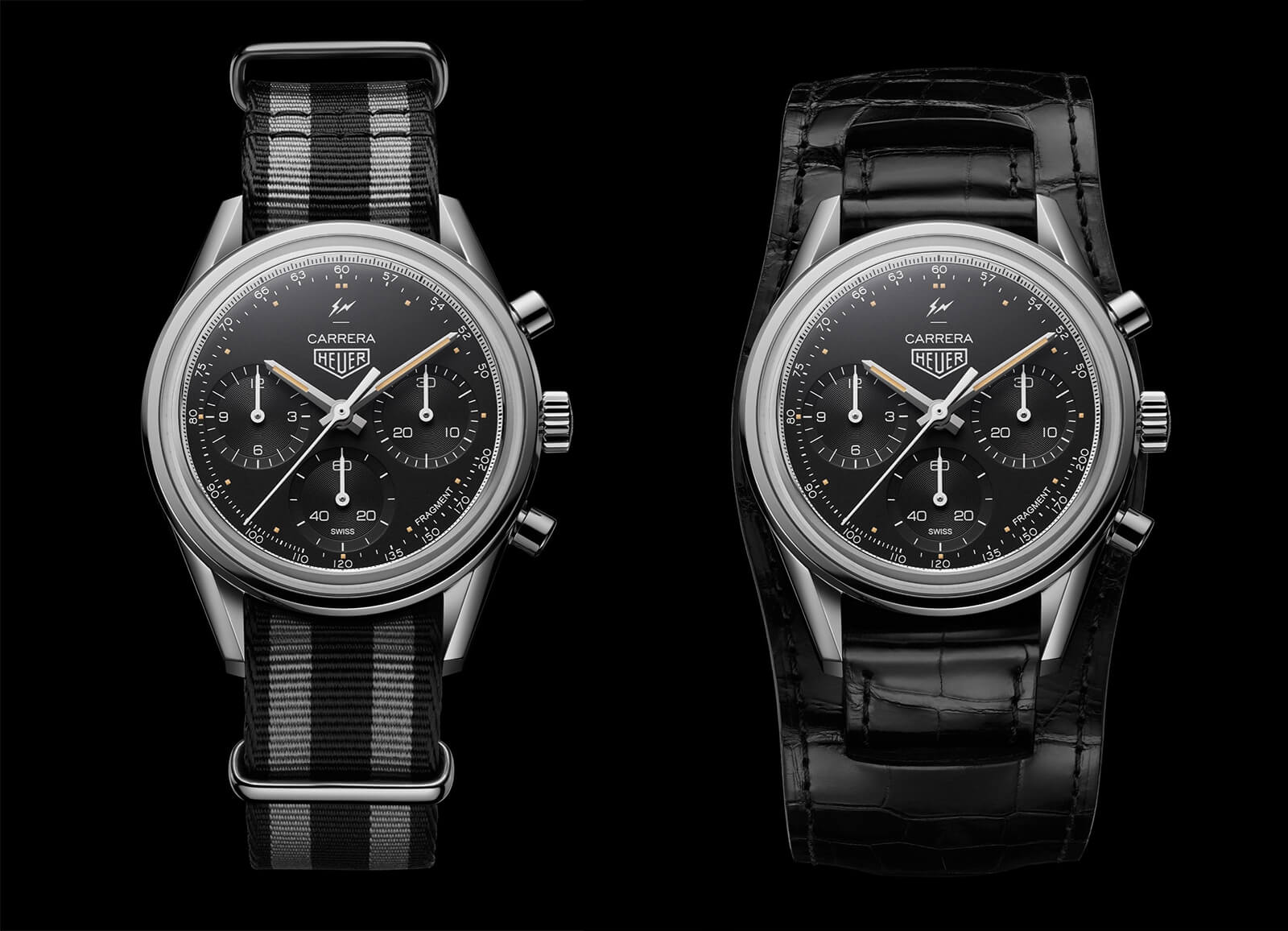 The Carrera Fragment comes with a black and gray NATO and a black alligator “Bund-style” strap (Image: TAG Heuer).