If the old adage of being able to judge someone by the quality of the company they keep holds true, then the Rolex Oyster Perpetual Day-Date has nothing to worry about.

Known as the “The President’s Watch” since it became Lyndon Johnson’s favored timepiece in 1965, it has been worn by more head’s of state and captain’s of industry than just about any other. An instant success when it was released nearly a decade earlier, it’s considered the final crowning achievement of Rolex founder Hans Wilsdorf.

Its long association with the great and the powerful has meant, traditionally, the Oyster Perpetual Day-Date has often had more than just a whiff of the establishment about it. Lately, it entered the mainstream. The likes of Justin Timberlake and LeBron James have been seen sporting yellow gold versions, and it has proved its versatility as a unisex model by adorning the likes of Nicki Minaj, Victoria Beckham and the Kardshians.

The appeal of the modern Day-Date is now as universal as it’s possible to be—what was once found mostly in the Oval Office or around the boardroom table is today also the preferred watch of the Dalai Lama.

The Day-Date has a history as illustrious as its clientele. Since its release in 1956, it has only ever been made from 18K gold, sometimes crafted with 95% pure platinum. Its list of innovations sees it chalk up points as the first ever waterproof chronometer with a self-winding mechanism to display both the date and the day of the week in full.

Those original generation 50s references, the 6510 and 6511, lasted just a year before being replaced with models featuring an upgraded balance wheel to enable the watch to gain the coveted COSC certification for accuracy. 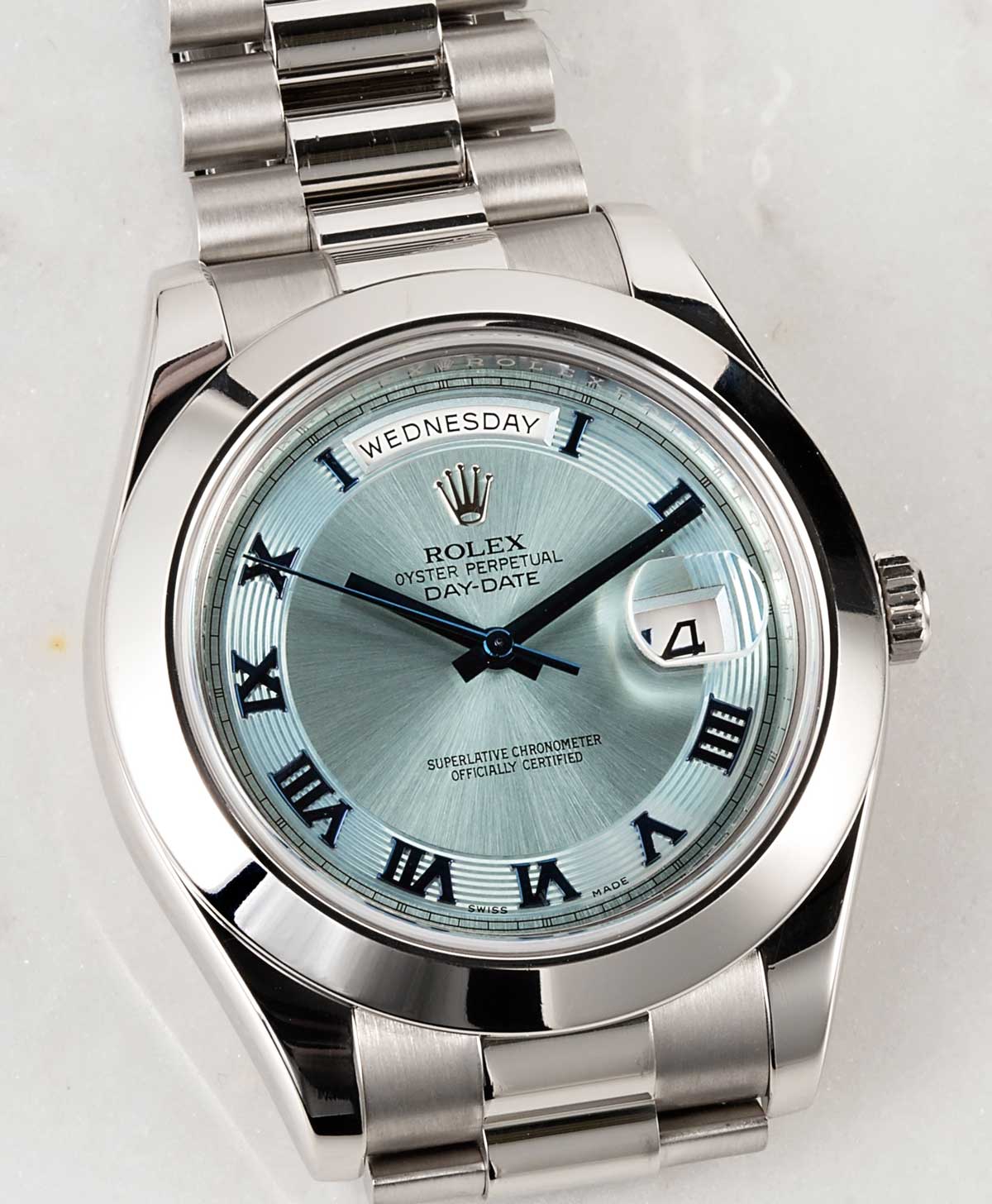 Here is a Day-Date that is crafted in 95% of platinum.

While the internal movement has changed numerous times thorughout watch’s long life, externally, the Day-Date is the design that has altered the least in the whole of the Rolex range. Not a company to ever perform drastic facelifts, compare today’s Day-Date with any of its ancestors and you’ll have a hard time spotting any differences.

The one major concession Rolex made took them more than 50 years.

Until 2008, the watch was only available with a 36mm case. Although by today’s tastes that makes it particularly small for a man’s timepiece, it helped the Day-Date find its enthusiastic female audience.

Recognizing the need to move with the times and produce a larger men’s version of their flagship, Rolex released the Oyster Perpetual Day-Date II, with the case size taking a leap up to 41mm. Although a welcome and popular addition, it was considered just too big in some circles and was discontinued in 2015 to make way for the Day-Date 40. That one millimeter has made all the difference and it sits well alongside the original 36mm. 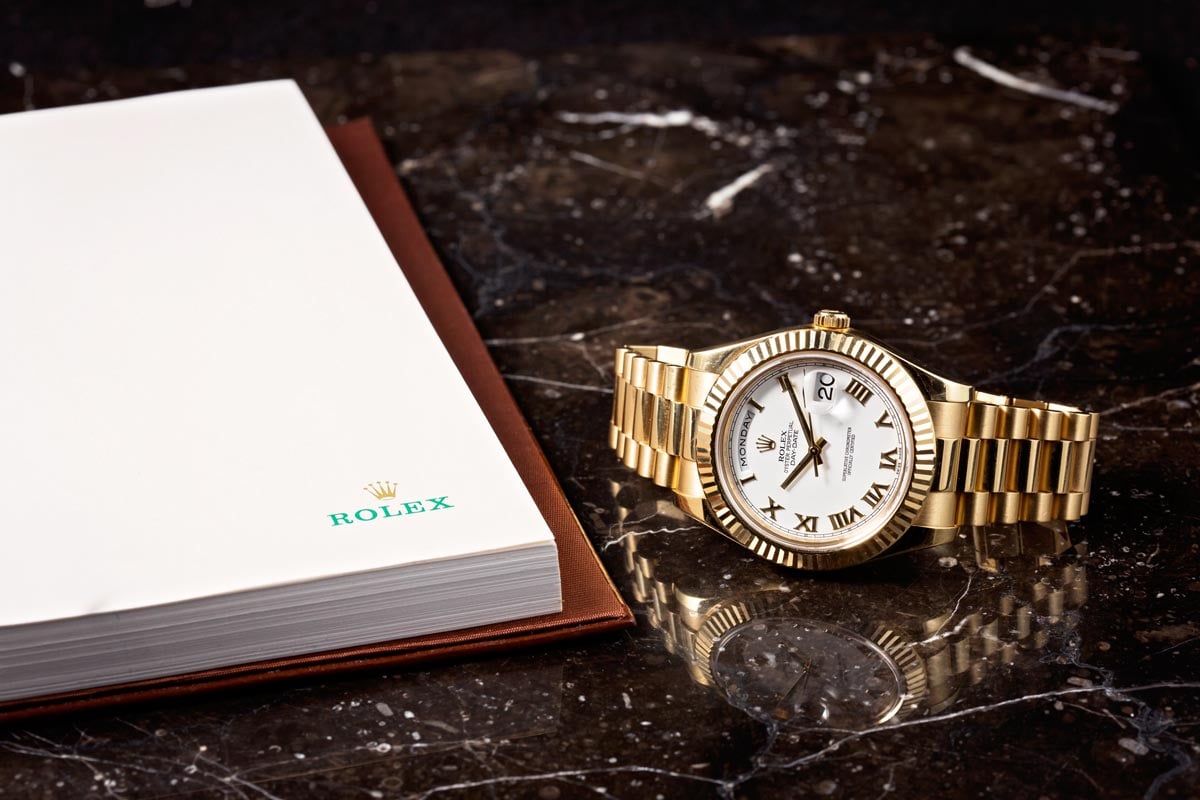 There are many different iterations of the President.

The Miracle at Midnight

As well as the bigger case, 2015’s 40mm Day-Date introduced a new caliber, the 3255. It’s an in-house movement, very loosely based on the 3155 still found in the watch’s smaller brother, but with 90% of the components reworked and upgraded. It contains Rolex’s own nickel-phosphorus Chronergy escapement that’s impervious to magnetic interference as well as an optimized blue Parachrom hairspring that offers 10 times greater shock resistance than traditional mechanisms. All the modifications to the 3255 add up to a power reserve of 70 hours, as against the 48 of its predecessor.

You can watch the day and the date change.

It’s the movement that gives any watch its heart, and it’s especially true for the Day-Date. The ‘miracle at midnight’, the nickname was given to that instantaneous jump in the two calendar windows every 24 hours, is as impressive today as it’s always been. In an age of digital wizardry, seeing the date in the 3 o’clock aperture and the day at 12 o’clock tick over in milliseconds and knowing it’s a machine-driven process is a bit like going to the movies. CGI special effects are all very nice, but there’s something much more compelling about watching the real thing.

There’s no doubt the Oyster Perpetual Day-Date is a statement watch, and its vast range of styles gives wearers an almost unlimited amount of control over just how loud that statement is. And the relatively small variation in the sizes—36mm to 40mm—makes a disproportionately large difference. 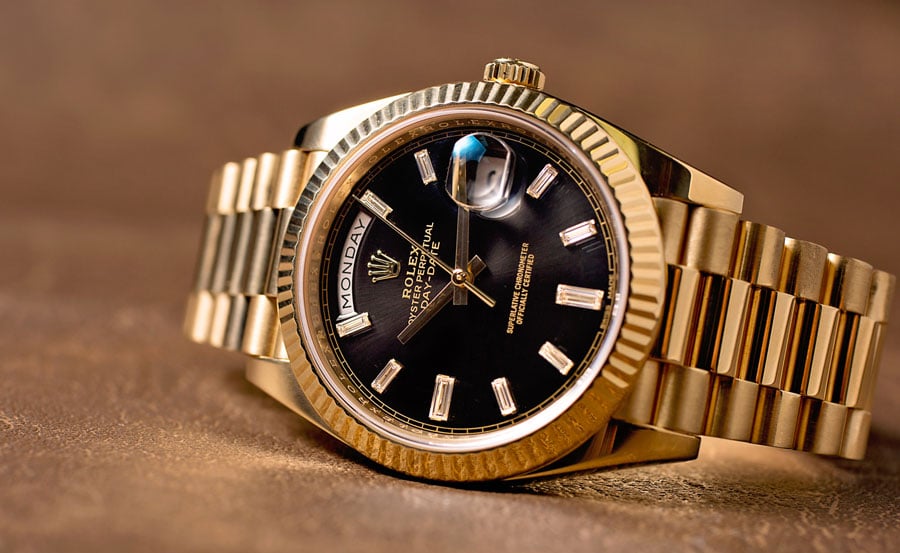 The gold Oyster Perpetual Day-Date is one variation of the this line.

A platinum or white gold 36mm piece remains an under-the-radar, subtle declaration of someone who has left their mark on the world, while 40mm of yellow or Everose gold with diamond indexes and bezel says something completely different.

Even the bracelet choice speaks volumes. Now available on the Oyster band or with a leather strap, originally the Day-Date was launched with the specifically designed ‘President’s Bracelet’, from where it gained its unofficial nickname. Supremely flexible, the three precious metal links on the President’s band contain ceramic inserts to increase durability.

Some Rolexes take a while to catch on with the watch buying public. The Daytona and Explorer II were both slow burners initially and took an association with famous Hollywood benefactors before they hit their stride. 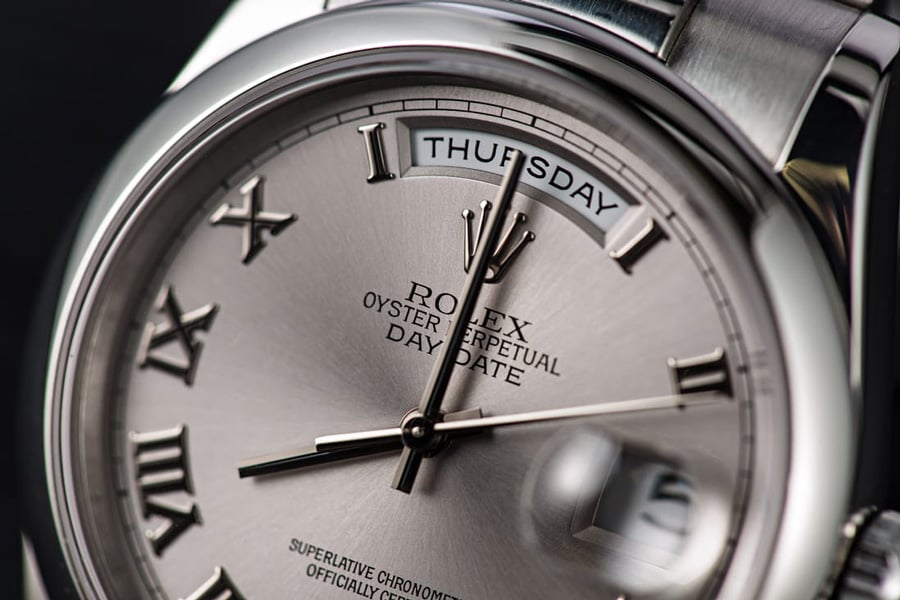 A platinum Rolex Day-Date is made only for the best.

The Oyster Perpetual Day-Date attracted an influential fan-base from the very beginning. From civil rights leaders to record breaking athletes, it has always been the watch for those not accustomed to taking orders or asking permission.

In whichever of the bewildering number of configurations it comes in, and in which of the 26 languages available for the day of the week, the message it conveys is the same; it’s the quintessential Rolex for people who’ve made it.