The Rolex Day-Date, the flagship offering from the world’s most successful watchmaker, got its more common nickname in part due to its style of bracelet. With its three semi-circular links, the President bracelet adds exactly the right amount of formality to a watch that has long been the first choice of many of the elite – top performers in a variety of different fields.

However, as with just about every one of Rolex’s creations, the Day-Date is a chameleonic model, one that can dramatically change its visuals and personality by swapping out a single component. So, substituting that President bracelet for the flat-linked Oyster immediately gives the watch a far more laid back, casual vibe. And one of the best examples of that instant versatility we know is the ref. 118235. 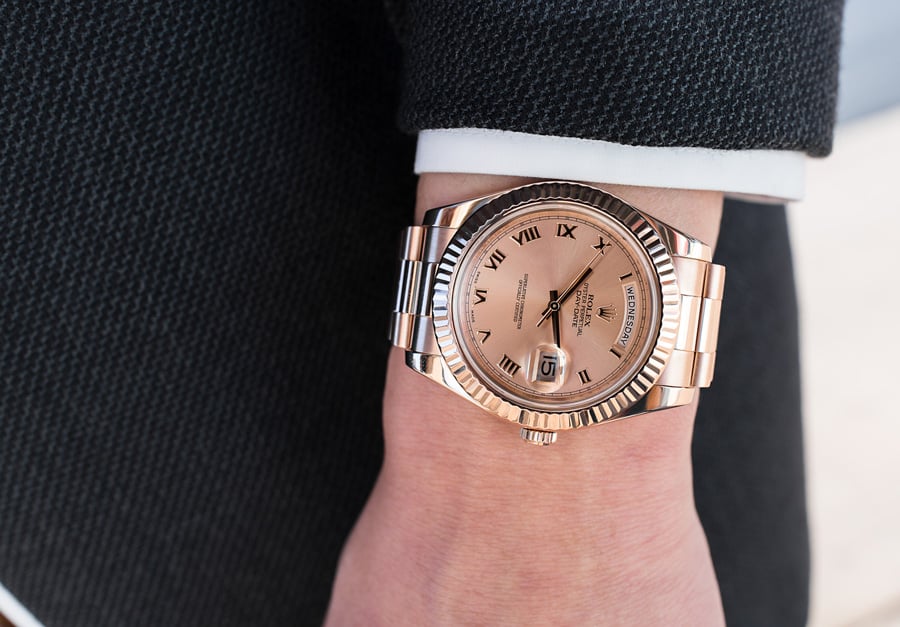 The original Rolex President was released in 1956, the first waterproof, self-winding wristwatch ever made to display the date and the day of the week written out in full. From that point on, the model has only ever been forged from precious metals; any of the three colors of solid gold or the shimmering luxury of platinum.

Just as with its Classic Collection contemporary, the Datejust, the President has been fitted with a mindboggling array of different combinations of dials and bezels, bracelets and hour markers, meaning there has always been at least one to appeal to any taste.

And also just like the Datejust, the basic blueprint of the Day-Date has barely altered over its more than 60-years at the top. The simple tonneau-shaped case, the guard-less crown, the elegantly sweeping lugs and the Cyclops-covered date window at the three o’clock have all been a consistent presence throughout its long history.

The ref. 118XXX series of the Rolex Day-Date is no longer in production, having run from 2000 until its was superseded with the current references in 2019. Yet, it used the same movement as the generation before it, the Cal. 3155, the first to include the convenience of the Double Quickset. Now, rather than having to roll the main hands through 24-hours to advance the two calendar functions, both could be forwarded by simply pulling the crown out to its second position and turning it clockwise once to jump the date one digit and counter-clockwise to similarly change the day of the week in its 12 o’clock window. 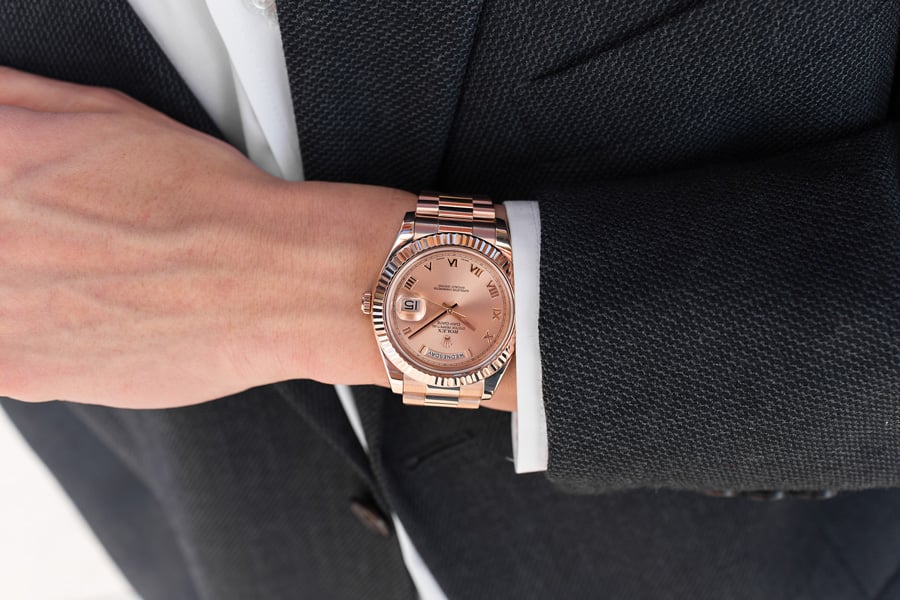 The Day-Date ref. 118235 was unveiled in 2005, one of the first Rolex watches to be issued in their new proprietary metal, Everose. Forged, as with the rest of the brand’s metals, in their own foundry in the Les Acacias manufacturing facility in Geneva, Everose is Rolex’s name for pink gold. The 18-karat alloy is made up of pure gold, mixed with copper to give it its distinctive warm hue, along with a small amount of platinum to seal in the natural tint. As its name suggests, that mix ensures the color will never fade, no matter how much exposure to the elements it receives.

The ref. 118235 is a 36mm model, the traditional size for the Day-Date since its inception, although the range has now been supplemented with a highly successful 40mm series too. Once considered conspicuously large even for a man’s watch, 36mm is now seen as very much a midsize, as popular with a female audience as a male one.

Surrounding the dial is a fluted bezel, as designated by the ‘3’ in the reference number. One of the oldest varieties of bezel still in use by Rolex, it evolved out of the old coin-edged style and, like the Day-Date itself, has only ever been crafted from precious metals. A more striking, attention-grabbing alternative to the understated smooth bezel type, the gently undulating ridges around the circumference catch both the light and the eye and lend the watch a deal more wrist presence.

For the dial itself, as you would imagine there is something for everyone. The ref. 118235 was fitted with a broad assortment of colors, running from classic black and white, through to some beautiful sunburst pinks and blues. Rolex also released some exclusively for their Everose pieces to complement the case metal, so you will see plenty of examples with rich chocolate brown dials. Elsewhere, for the ultimate in individuality, rare and semiprecious materials such as mother-of-pearl and even meteorite found their way into the collection, the nature of the substances ensuring each one is totally unique.

Hour markers run the gamut of either Roman or Arabic numerals or, because this is the Day-Date we’re talking about, there are no shortage of diamond and sapphire indexes either.

And, as already covered, this generation was available with the option of either the President or Oyster bracelet, a choice which is no longer officially offered.

The Oyster came with both the Oysterlock folding clasp and Easylink extension system for quick adjustment, while the President bracelet was finished off with the iconic Crownclasp, a hidden fastener which makes the band appear as one unbroken chain around the wrist. 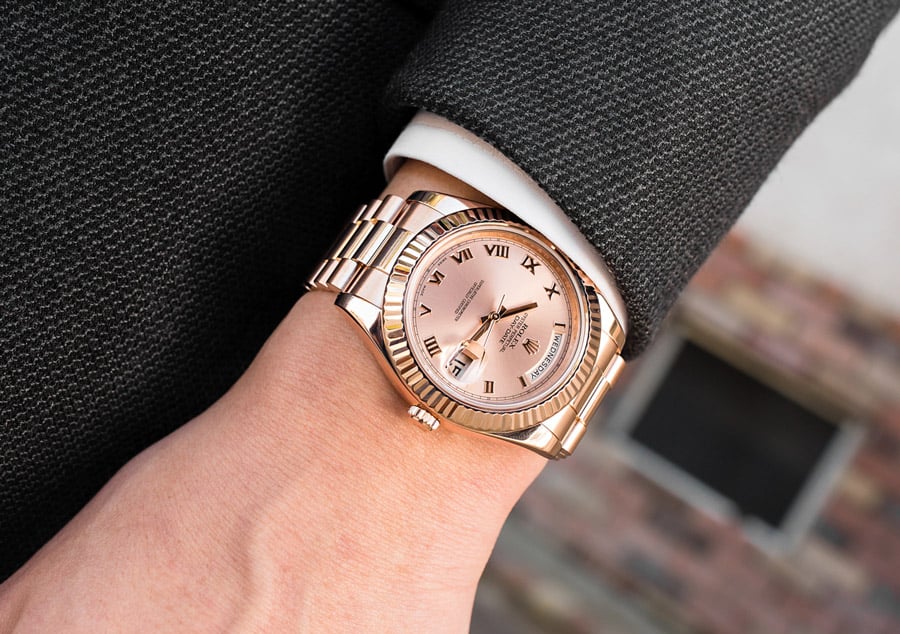 Released in 1988, the Cal. 3155 was the replacement for the Cal. 3055 and, in truth, there are far more similarities than differences between the two. Both run at 28,800vph, giving the eights-ticks-per-second sweep to the seconds hand. Each uses the well-proven setup of a free-sprung Nivarox hairspring and Breguet overcoil, with a Microstella regulated Glucydur balance wheel, and they both even have the same power reserve of 48-hours. In fact, with the exception of going from a Single to a Double Quickset and the addition of a handful of extra jewels because of it (from 27 to 31) there is virtually nothing to choose between the two mechanisms—testament to just how well and for how long Rolex have been engineering their movements.

And, as you would expect, the two are Superlative Chronometers, guaranteeing a timekeeping accuracy of between -2/+2 seconds a day.

Rolex usually only introduce a new generation of one of their watch collections when some part of it has undergone a significant improvement, and that part, nine times out of ten, is the internal movement.

That is not the case, however, with the ref. 118235. With this series, the caliber stayed the same as with the iteration before it and it was the bracelet which was upgraded.

This was the first of the Day-Dates to have a bracelet containing all solid links, including end links (SEL). So, while it is tough to spot any visual differences between five and six digit examples, in the flesh there is a definite weight increase in the later models.

The ref. 118235 and its peers were also the last to have the official option of the Oyster bracelet alongside its eponymous President band, giving this pillar of the establishment a sporty persona you just don’t get anymore.

Best of all, prices on the preowned market for this model are significantly lower than for its latest incarnation, with a starting point of around $25,000.

For a selection of some of the best examples around, check out our online store.