Nothing can stop the Super Bowl, not even a global pandemic. On Sunday, February 7th, 2021, the show will go on, with the game set to take place at Raymond James Stadium in Tampa, Florida. Grammy award-winning artist, The Weeknd is scheduled to perform during what is expected to be an exhilarating halftime show.

The NFL is one of the most profitable sports leagues in the world. The Dallas Cowboys alone were worth a staggering $4.8 billion in 2019. As of 2020, the average salary for NFL players was $860,000, with the highest-paid athlete being Seattle Seahawks quarterback Russell Wilson, who pocketed approximately $53 million in 2020. Even the lowest-paid professional football players have some serious cash to spend on various luxuries, and this certainly includes a wide variety of luxury watches.

With Super Bowl LV just a couple of days away, let’s revisit some of the championship-worthy timepieces that are worn by the league’s top players.

Click here for a closer look at 7 of the most iconic luxury watches. 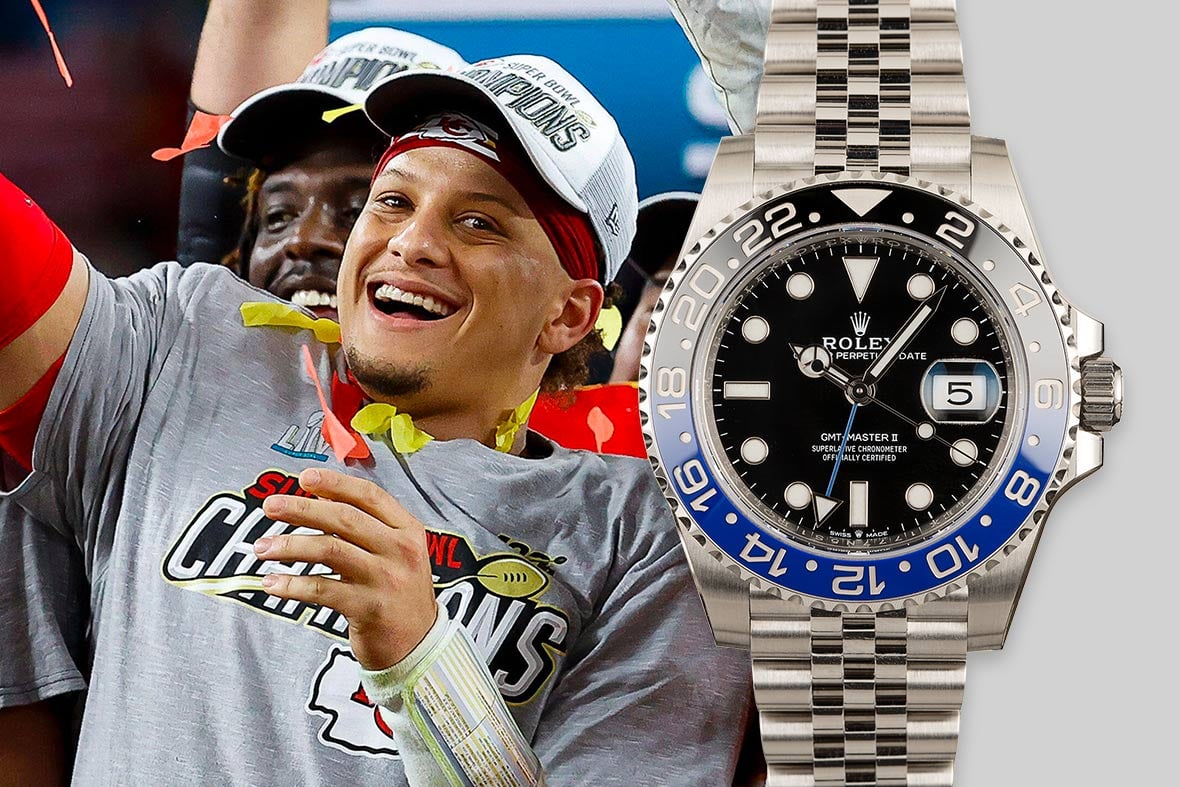 We’ll start our list with none other than quarterback Patrick Mahomes. With a 10-year contract worth more than $500 million, the 2018 MVP has enough money to buy pretty much any luxury watch his heart desires. He seems to favor Rolex, with his collection featuring some of the most expensive watches in the brand’s lineup, including the Rolex Daytona “Rainbow” in Everose Rolesor. In place of a traditional tachymeter bezel, the Rainbow Daytona features a bezel set with rainbow-colored gems, which is complemented by a dial with matching gemstone hour markers and lugs that are encrusted with diamonds.

Mahomes also owns various models from the Rolex Yacht-Master collection. While celebrating his Super Bowl victory, he was spotted with what appears to be an Everose Yacht-Master 40 ref. 116655 on his wrist, featuring a sleek Oysterflex bracelet, matte ceramic bezel, and a glittering diamond pave dial. The stainless steel Yacht-Master II ref. 116680 is also a fixture on Mahomes’s wrist, and it is instantly recognizable due to its striking blue ceramic bezel and versatile stainless steel finish.

The Rolex GMT-Master II ref. 126710BLNR was the star of Baselworld 2019, featuring the beloved black and blue “Batman” bezel paired with a Jubilee bracelet for the first time. It tops nearly every Rolex enthusiast’s wish list, and Patrick Mahomes paired his Super Bowl ring with this prized Rolex, making for a truly envious combination. 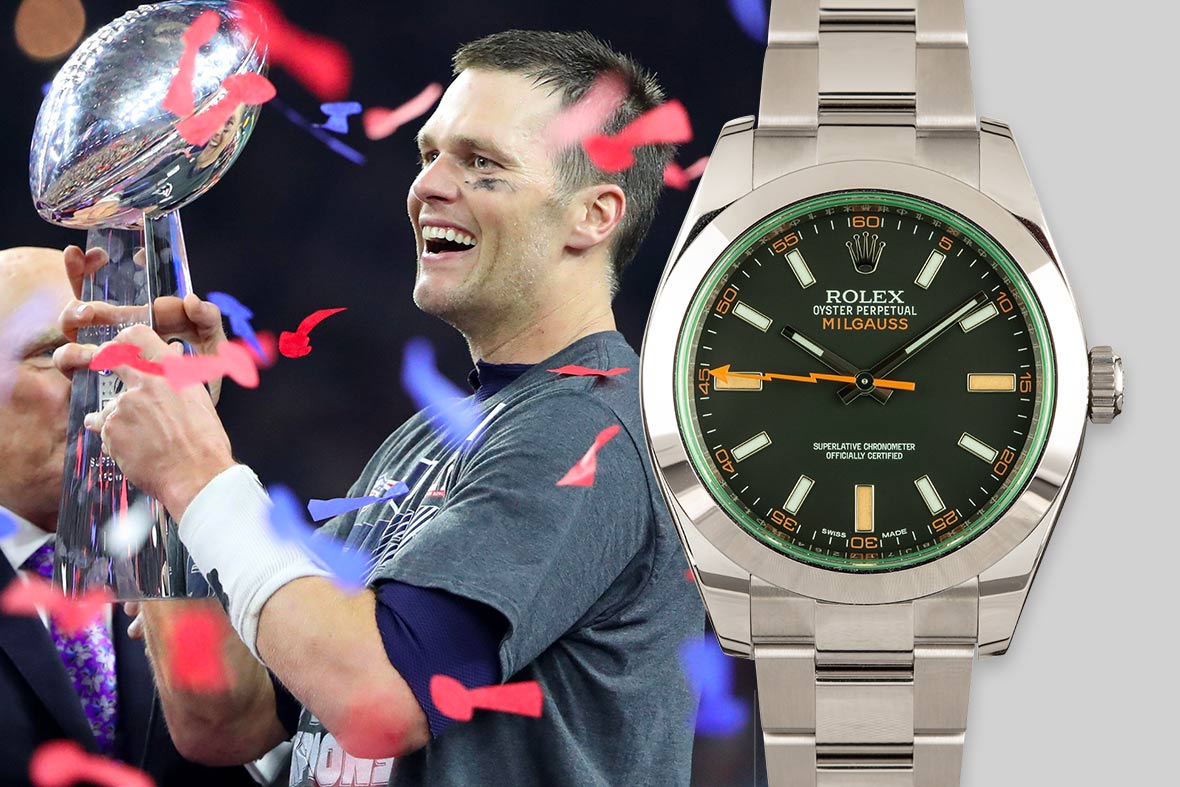 Tom Brady, now with the Tampa Bay Buccaneers, was spotted with an IWC Top Gun on his wrist while partaking in the festivities at Super Bowl LIV. Brady has been an ambassador of the brand since 2019 and boasts an impressive IWC watch collection, including both the Timezoner and Top Gun Miramar. He also owns a Portugieser gifted to him by his wife for his 30th birthday, an impressive platinum Father and Son Big Pilot, and a special-edition Big Pilot given to him by Johann Rupert, the chairman of the Richemont group.

IWC isn’t the only brand in Brady’s watch box. The former New England Patriots quarterback also has an enviable Rolex collection, including the cult favorite Milgauss ref. 116400GV with a green sapphire crystal and a classic gold Presidential Day-Date. Containing over 20 luxury watches, we’d jump at the opportunity to take a peek at Tom Brady’s collection any day. 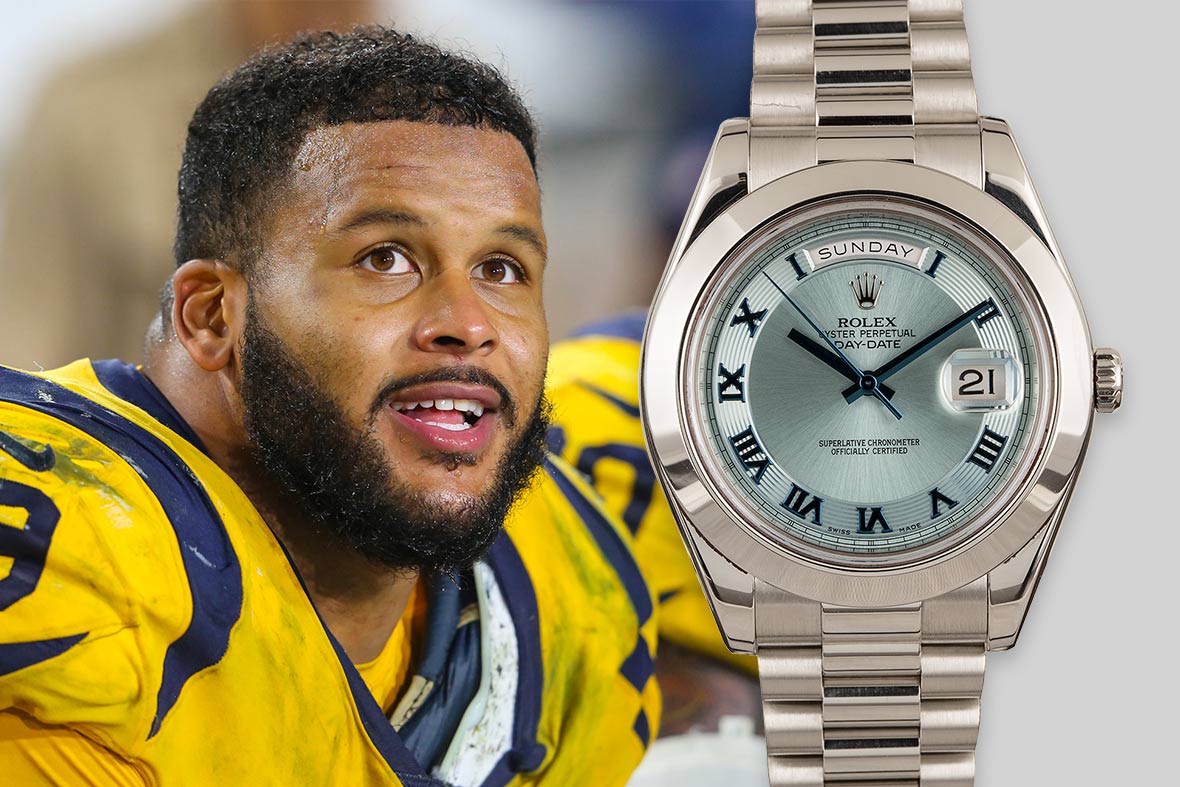 2019 NFL Defensive Player of the Year Aaron Donald has excellent taste in luxury watches. The “Terminator” has been known to wear a few different examples of the Day-Date President on his wrist, one in yellow gold and one in platinum with an ice blue dial. His collection also includes a two-tone Rolex Datejust with a diamond dial. As one of the highest-paid players in the NFL, it comes as no surprise that his collection of luxury watches consists of some of Rolex’s finest offerings. 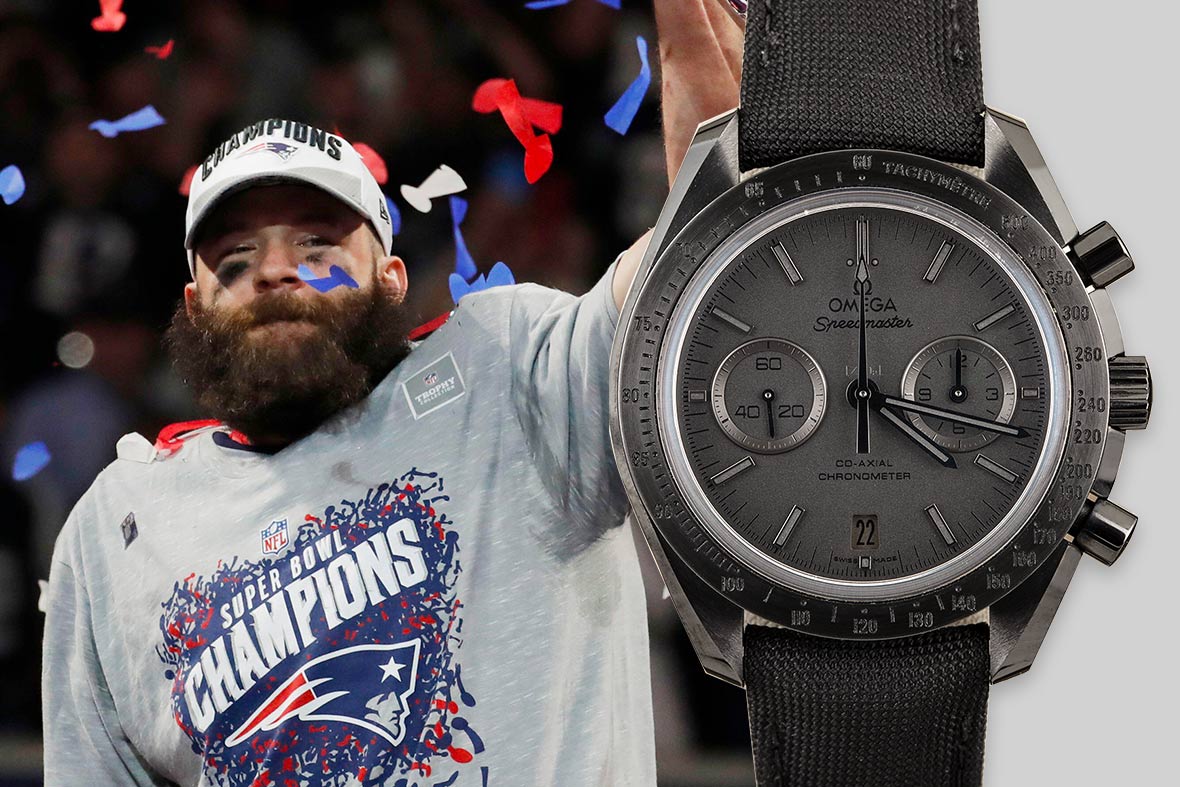 Fellow Patriots player and Super Bowl LIII MVP Julian Edelman also loves the Rolex Milgauss. He was spotted during a ring ceremony with a similar 116400GV “Glace Verte” edition as Tom Brady on his wrist with a black dial and green sapphire crystal. He has also been known to wear another edition of the same exact Milgauss reference, but the version fitted with the vibrant Z-Blue dial and a green sapphire crystal.

Rolex isn’t the only brand in the wide receiver’s collection. He made an appearance on the Jimmy Fallon Show in 2017 while sporting an Omega Speedmaster Dark Side of the Moon “Black Black” ref. 311.92.44.51.01.005 on his wrist. The watch is an intriguing edition of the iconic Moon Watch series that was developed to celebrate the Apollo 8 mission. It features a full black-on-black design that includes a black ceramic case body, black Super-LumiNova plots, matching black sub-dials, and even a black ceramic bezel topped with, you guessed it, a black tachymeter scale. 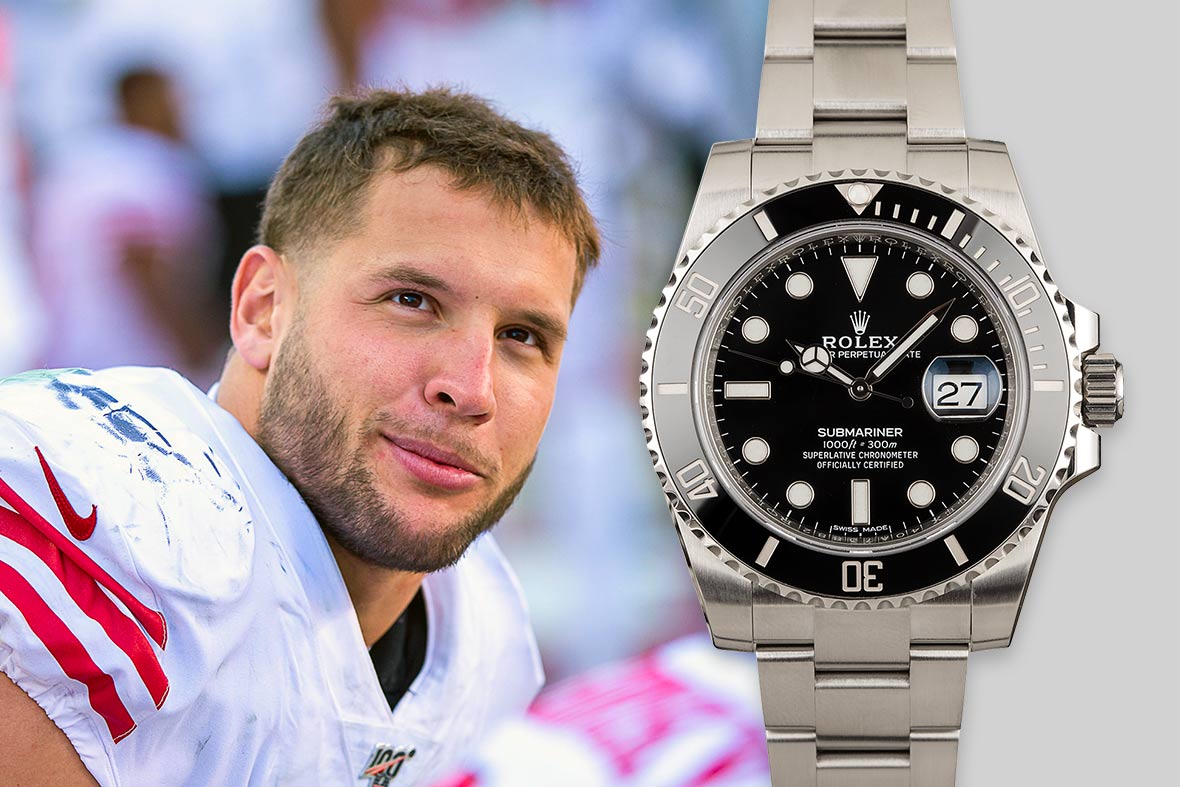 Defensive end Nick Bosa was spotted wearing a stainless steel Submariner on his wrist as he signed his contract with the San Francisco 49ers. Rolex is a hallmark of success, and the Submariner is no exception. Celebrities, world dignitaries, and successful athletes have all been known to wear the iconic stainless steel Submariner on their wrists, making it a very smart choice for the 2019 Pepsi NFL Rookie of the Year.

The iconic diver has been in production since 1953 and it is widely considered to be the archetype of the modern dive watch. More recently, the historic model features a ceramic (aka Cerachrom) bezel, 904L Oystersteel, and Maxi dial topped with Chromalight plots. Given that Nick Bosa signed his contract with the 49ers in 2019 and his Rolex Submariner was spotted on his wrist back then, the specific model he owns is almost certainly the ref. 116610LN, given that the new 41mm version was not released until September 2020. 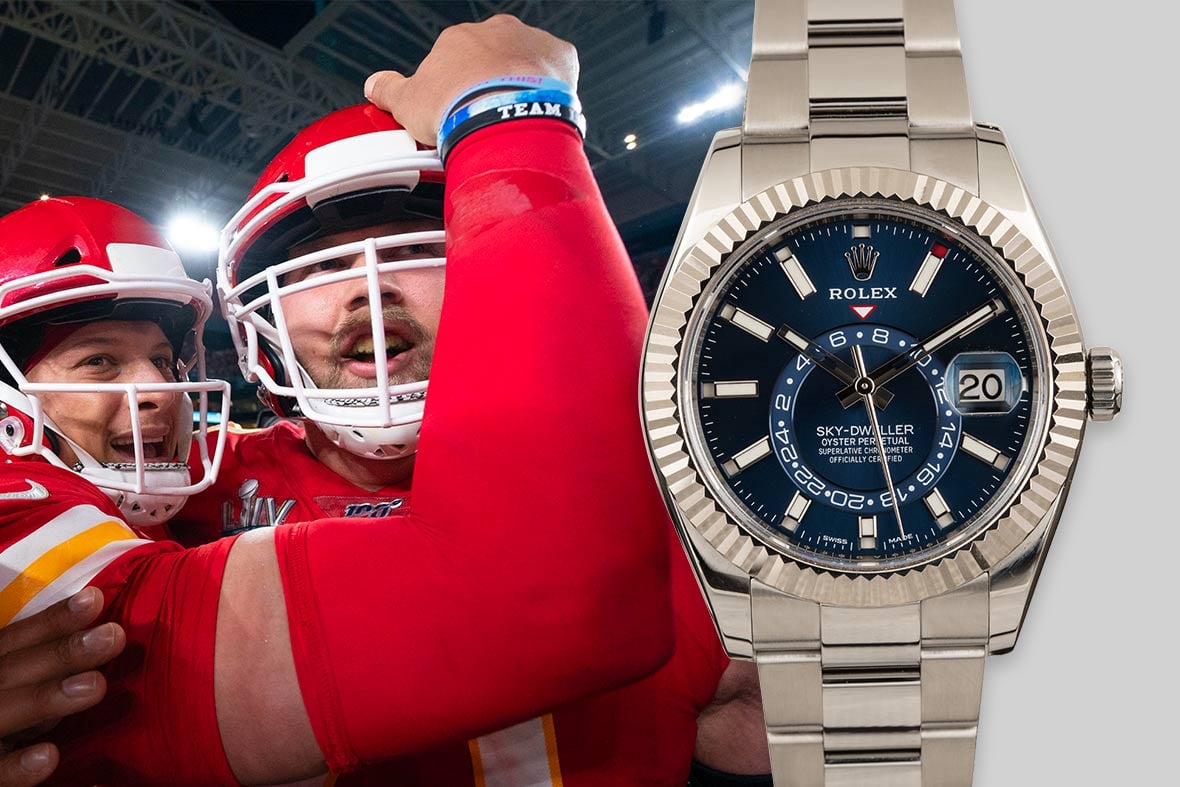 Kansas City Chiefs offensive tackle Mitchell Schwartz is another one of the highest-paid athletes in the NFL. His contract ending this year is worth a hefty $11.255 million. It isn’t surprising that his watch box includes such giants as Patek Philippe, Rolex, and Vacheron Constantin. He set tongues wagging in 2018 when he posted a photo of his watch roll to his Instagram account, showing what appears to be watches from all three brands, including the iconic blue dial Rolex Sky-Dweller.

His love for luxury watches seems to run deep. While browsing through the Super Bowl champion’s IG account, we spotted numerous impressive timepieces on his wrist. Including a striking yellow dial F.P. Journe Centigraphe and a Blancpain Fifty Fathoms on a rubber bracelet. 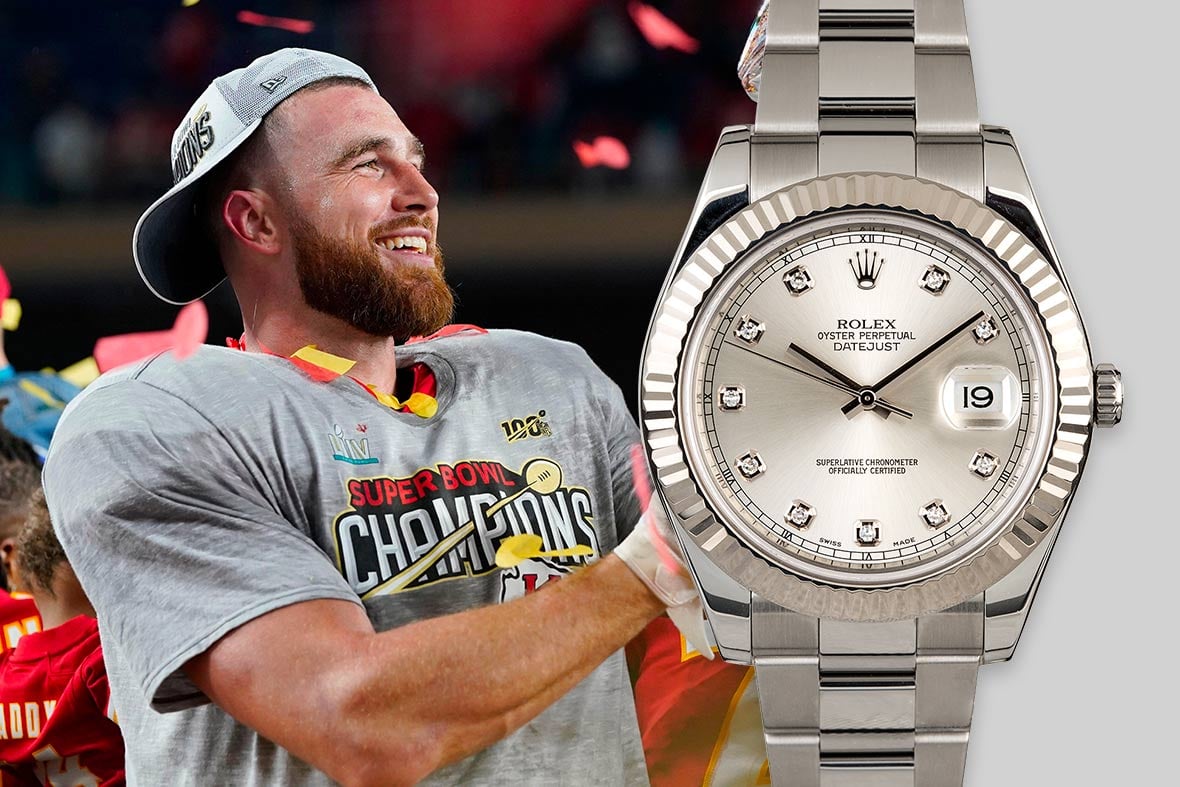 As the Super Bowl LIV champs, it only makes sense to highlight another player’s watch collection from the Kansas City Chiefs. Tight end Travis Kelce’s contract is worth between $14 million and $15 million, giving him a very generous budget to build out his watch collection. Two of his favorite Rolex models appear to be a classic yellow gold Day-Date President and a 41mm White Rolesor Datejust with a diamond dial that he has been photographed wearing on numerous occasions.

Travis Kelce is one of the most fashion-forward players in the league. As a point of reference, Kelce was dressed in head-to-toe silk Christian Dior during his team’s Super Bowl ring ceremony. On one hand, is his diamond-encrusted Super Bowl ring. On the other hand, is what appears to be a diamond-set Breitling Flying B. 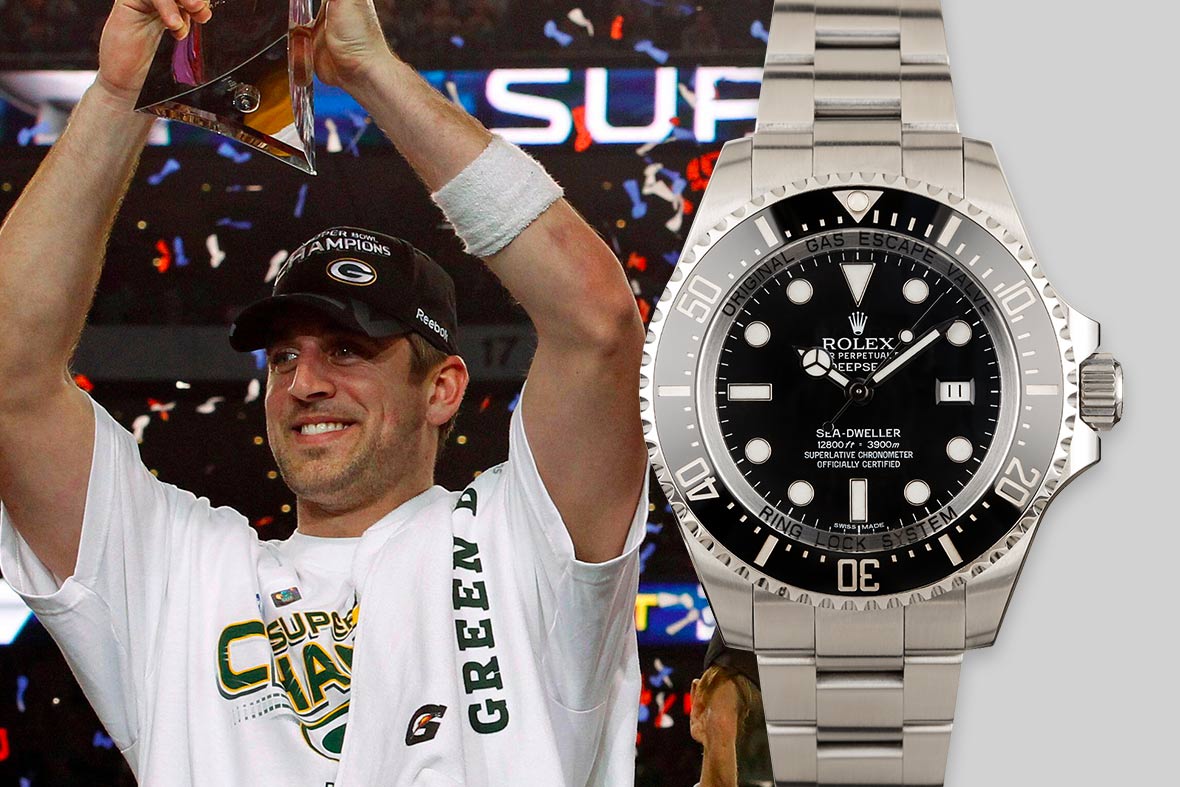 NFL quarterback Aaron Rodgers joined the Green Bay Packers in 2005. His most recent 4-year contract is worth an astounding $134 million, affording him more than enough cash to indulge in some of the most exclusive luxury watches on the market. So, what has the Super Bowl winner worn on his wrist? None other than the robust black dial Rolex Deepsea ref. 116660, which measures an impressive 44mm in diameter. In terms of Rolex watches, the Deepsea is one of the largest in the brand’s catalog, and it’s an easy choice for anyone who is often in the spotlight and wants a statement watch with timeless style.

In addition to his Rolex, Rodgers has also been spotted wearing various Roger Dubuis watches, and frequently wears a Patek Philippe Calatrava on his wrist with a rose gold case, an elegant white dial topped with Roman hour markers, and a hobnail bezel. The watch sports a brown leather bracelet and is the epitome of classy luxury watch styling.