At the end of 2020, the UK-based newspaper, The Guardian, published its list of “The 100 Best Male Footballers in the World 2020.” Of course, for those of us who live in the U.S., these athletes are better known as soccer players. The top five players on the list are Robert Lewandowski, Lionel Messi, Cristiano Ronaldo, Kevin De Bruyne, and Sadio Mané.

Not only are these top soccer players paid handsomely for their skills on the field but their bank accounts are also fuelled by lucrative brand endorsement deals. In fact, according to Forbes, three of “The World’s 10 Highest-Paid Athletes” in 2021 are soccer players – Lionel Messi, Cristiano Ronaldo, and Neymar (who just missed a spot on this list as he was ranked 9th). Naturally, we were curious to find out what watches these elite athletes have in their collection. Read on to find out some of the luxury watches sported by the world’s top soccer players. 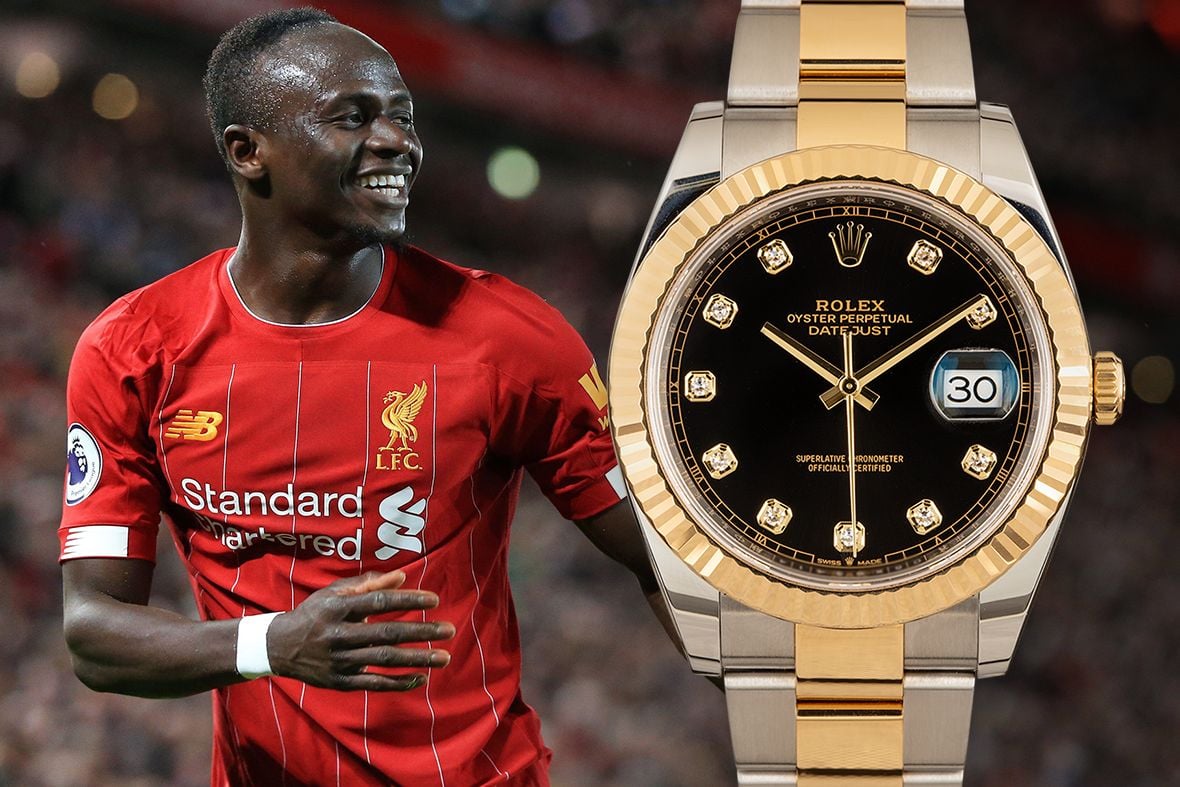 Wing player for both the Premier League club Liverpool and the Senegal national team, Sadio Mané once famously said, “Why would I want ten Ferraris, twenty diamond watches, or two planes? What will these objects do for me and for the world?” Instead, the soccer megastar prefers to fund essential projects in his hometown of Bambali, Senegal including building a school, hospital, and mosque.

He may not want 20 diamond watches but Mané does have at least one in the form of a two-tone steel and yellow gold Rolex Datejust 41 (ref. 126333) with a Jubilee bracelet and diamond indexes on its black dial. 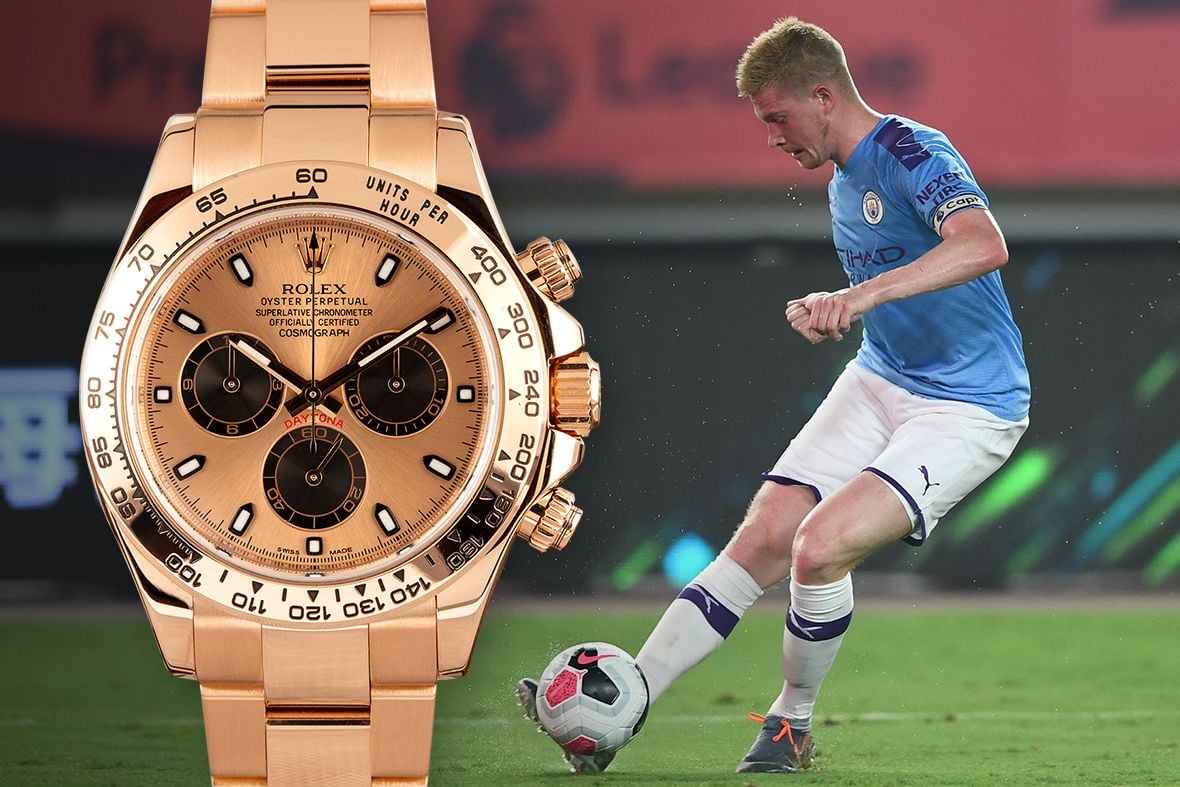 Midfielder for Manchester City, Kevin De Bruyne is also a vital player of the Belgium national team, helping The Red Devils secure third place at the 2018 World Cup by beating out top teams like England and Brazil.

So far we’ve spotted De Bruyne with one Rolex watch on his wrist – and it’s a good one. De Bruyne wears an Everose gold Rolex Daytona (ref. 116505) with a matching rose gold dial punctuated with black sub-dials. The Belgian star footballer even had his trusty Rolex watch on when he signed a new five-year deal with Manchester City back in 2018. 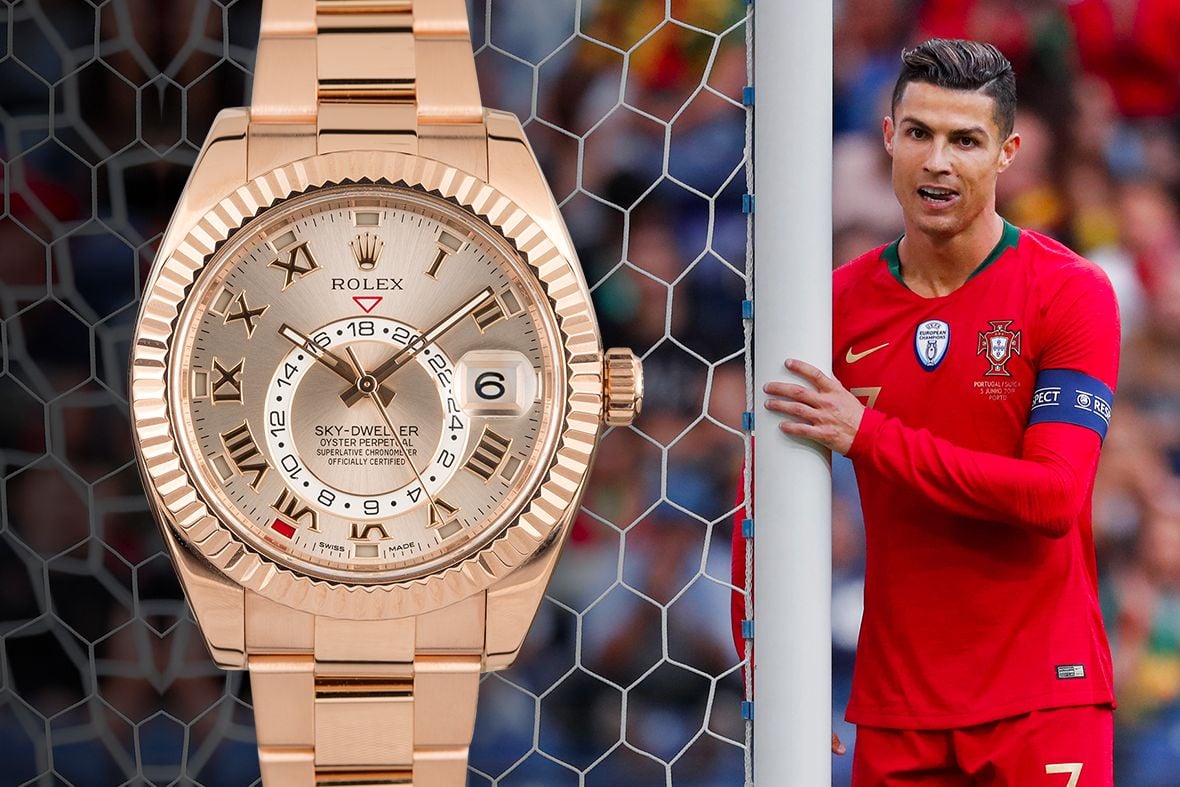 The most famous soccer player in the world, Cristiano Ronaldo is a forward for Juventus and the captain of the Portugal national team. Along with his five Ballon d’Or awards and four European Golden Shoes, Ronaldo is also the most-followed person on Instagram with over 300 million followers.

The megastar is also an avid fan of high-end timepieces with an extensive watch collection that includes brands like Girard-Perregaux, Hublot, Breguet, Jacob & Co. Franck Muller, TAG Heuer, and Bulgari – many of them blanketed in diamonds and one-off pieces. For instance, he wears the one-of-a-kind Franck Muller Cintrée Curvex Tourbillon “Sertissage Invisible” and a bespoke rose gold and diamond Girard-Perregaux Planetarium with a tri-axial tourbillon.

Ronaldo’s two Rolex Sky-Dweller watches – one in 18k yellow gold (ref. 326938) and the other in Everose gold  (ref. 326935) get some pretty decent wrist time but it’s his duo of GMT-Master II watches that grab all the attention. The first is the yellow gold GMT-Master II (ref. 116758SARU) with a sapphire, ruby, and diamond bezel crafted to look like the iconic “Pepsi” bezel. The other the dazzling white gold GMT-Master “Ice” (ref. 116769TBR) entirely set with diamonds. 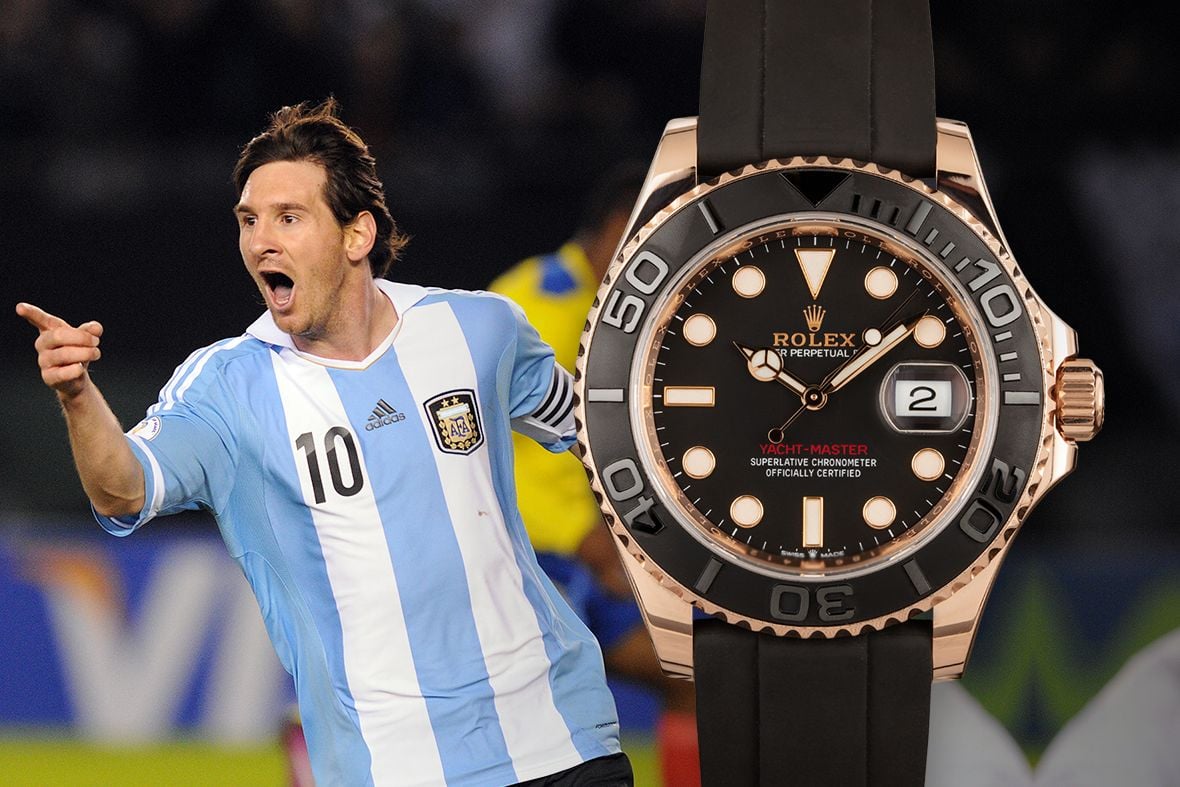 Even during turbulent years, Leo Messi is still considered one of the greatest soccer players of all time with the record for most Ballon d’Or awards (six in total) and a slew of other accolades. The captain of both Barcelona and the Argentina national team, Messi reportedly earned $130 million between May 1, 2020, and May 1, 2021.

However, one watch that Messi wears that wasn’t made in his honor is the Everose gold Rolex Yacht-Master 40 (ref. 116655) with a sporty black Oysterflex bracelet, black ceramic bezel, and black dial. 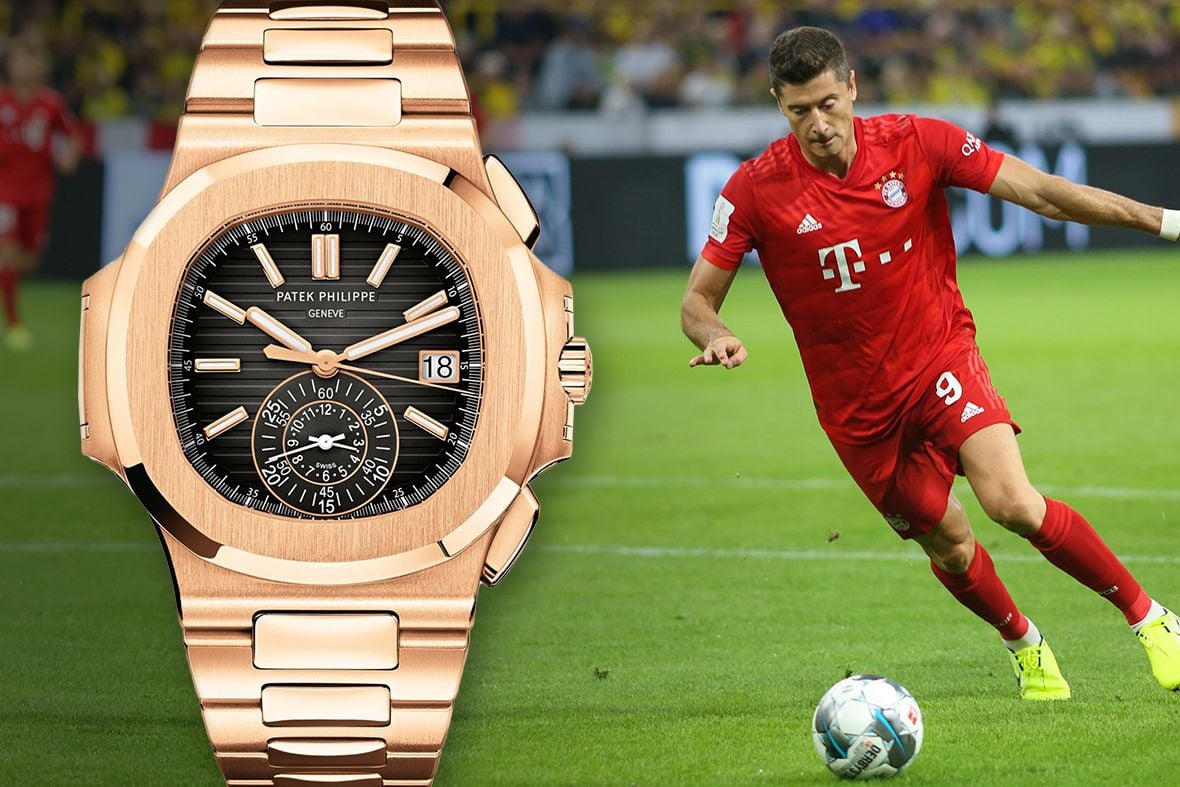 Similar to many celebrity watch collections, the watch boxes of the finest soccer players are mostly dominated by Rolex, Patek Philippe, and Audemars Piguet. Richard Mille and Hublot come in close second and there are plenty of honorable appearances by brands like Jacob & Co. and TAG Heuer.

As sportsmen, it comes as no surprise that these professional soccer players favor sports watches such as the Daytona, GMT-Master II, Nautilus, Aquanaut, and Royal Oak. Bejeweled watches are also well represented here – factory-set, of course – with some stunning gem-set timepieces from Rolex, Jacob & Co, and Hublot. Most of us will never achieve the athletic level of these masters of the beautiful game – but we can set our sights on scoring some of the same top-tier luxury watches that they choose to keep in their collections.